The Silver Snoopy Award 50th Anniversary watch came out over two years ago now (on October 5th, 2020, to be precise). However, as you know, the delivery of these watches is slow, and I got mine in early 2022. As the deliveries are still ongoing, I thought it would be nice to share my experiences after a year of ownership with it and update you with some afterthoughts. 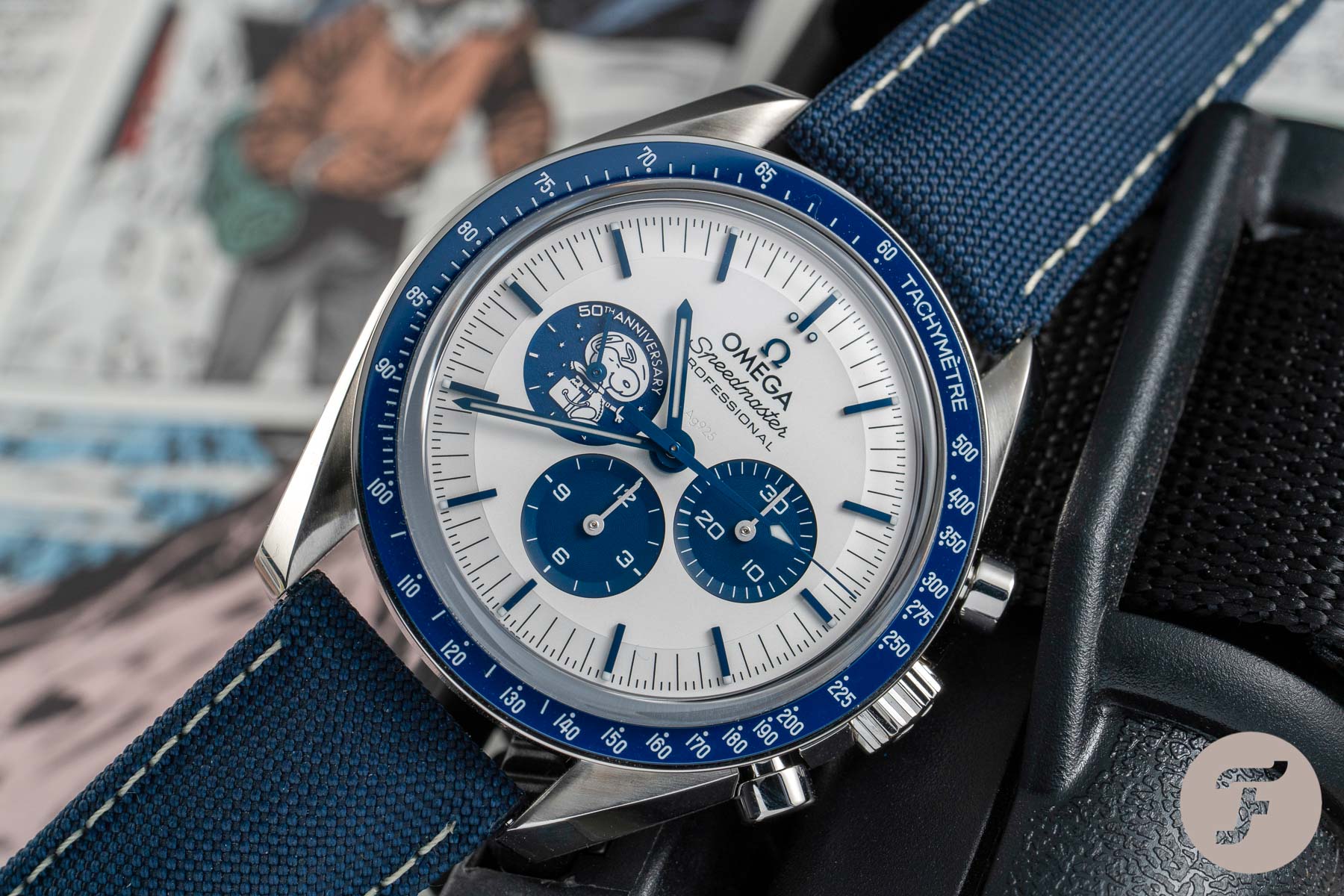 Back in 2020, we had a prototype of the Speedmaster Silver Snoopy Award 50th Anniversary in our office so that we could create some video/photo content in time for the official October 5th release. But this also allowed me to wear it a bit and see if I liked it enough to order one for myself. Needless to say, I did, and I waited impatiently till it arrived in early 2022. I’m not too fond of rumors, but it’s probably true that Omega boutiques only receive a handful of these every month and allocate them well in advance. The only Omega watch that seems to have a slower delivery rate is the Speedmaster Calibre 321. More on that later. 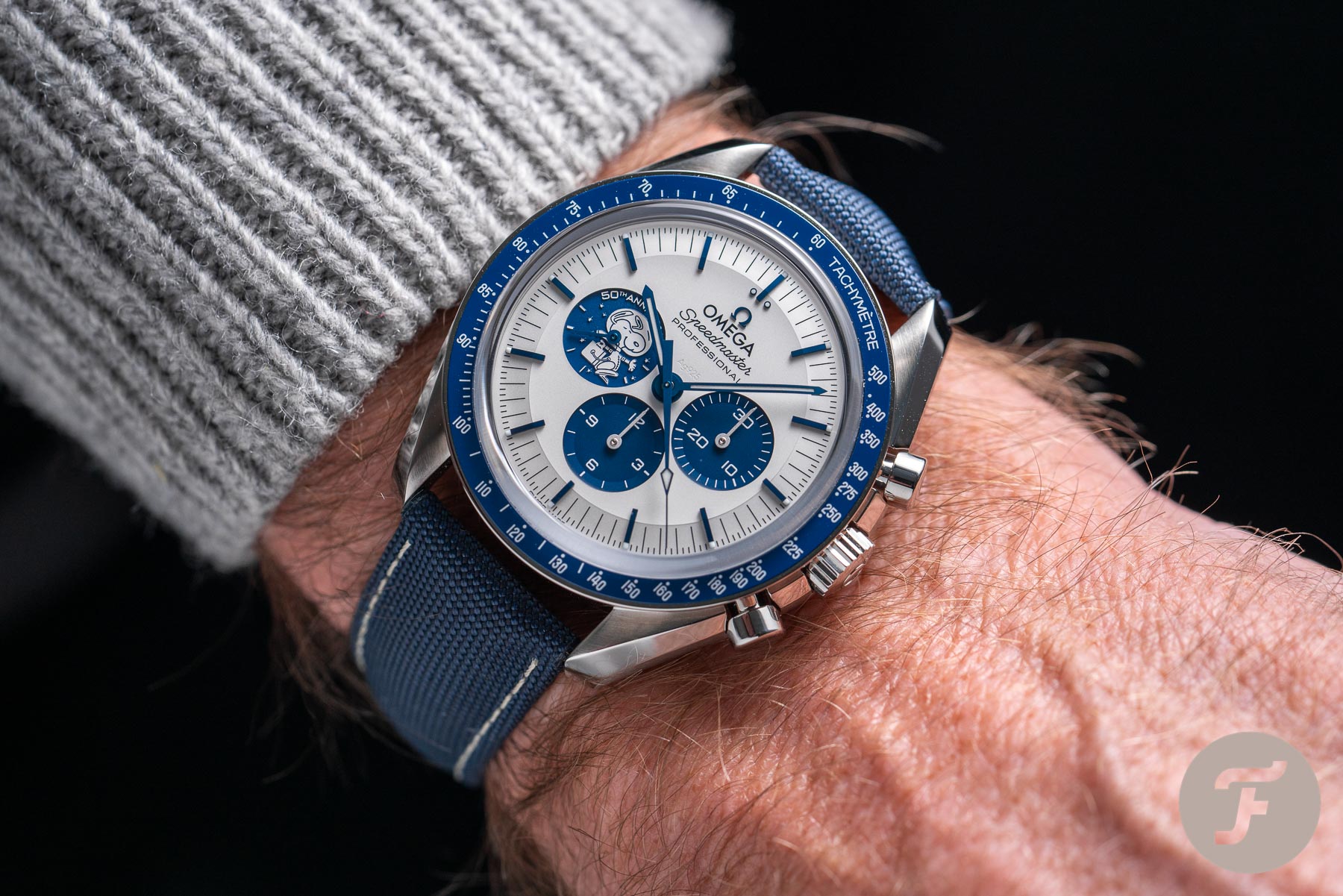 Picking up the Silver Snoopy Award

Anyway, I went to the Omega boutique to pick up the Speedmaster Silver Snoopy Award 50th Anniversary, paid its retail price (in case you were wondering), and left with a smile on my face. I don’t want to go into all the background of this third Speedmaster dedicated to the Snoopy Award that Omega received in 1970 for its important role during the Apollo 13 mission. Today, I’d like to limit it to the watch itself. 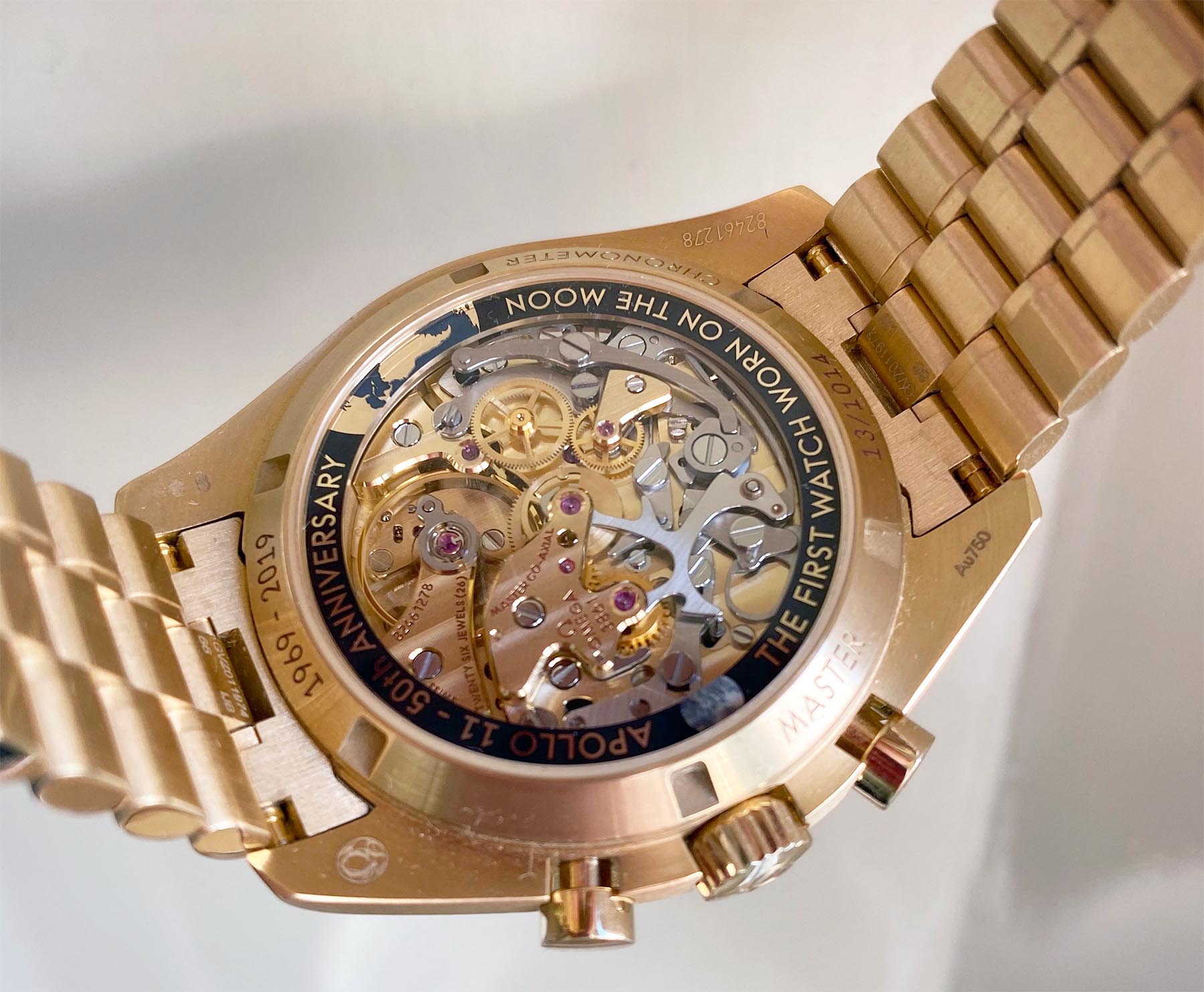 The third Speedmaster to use caliber 3861 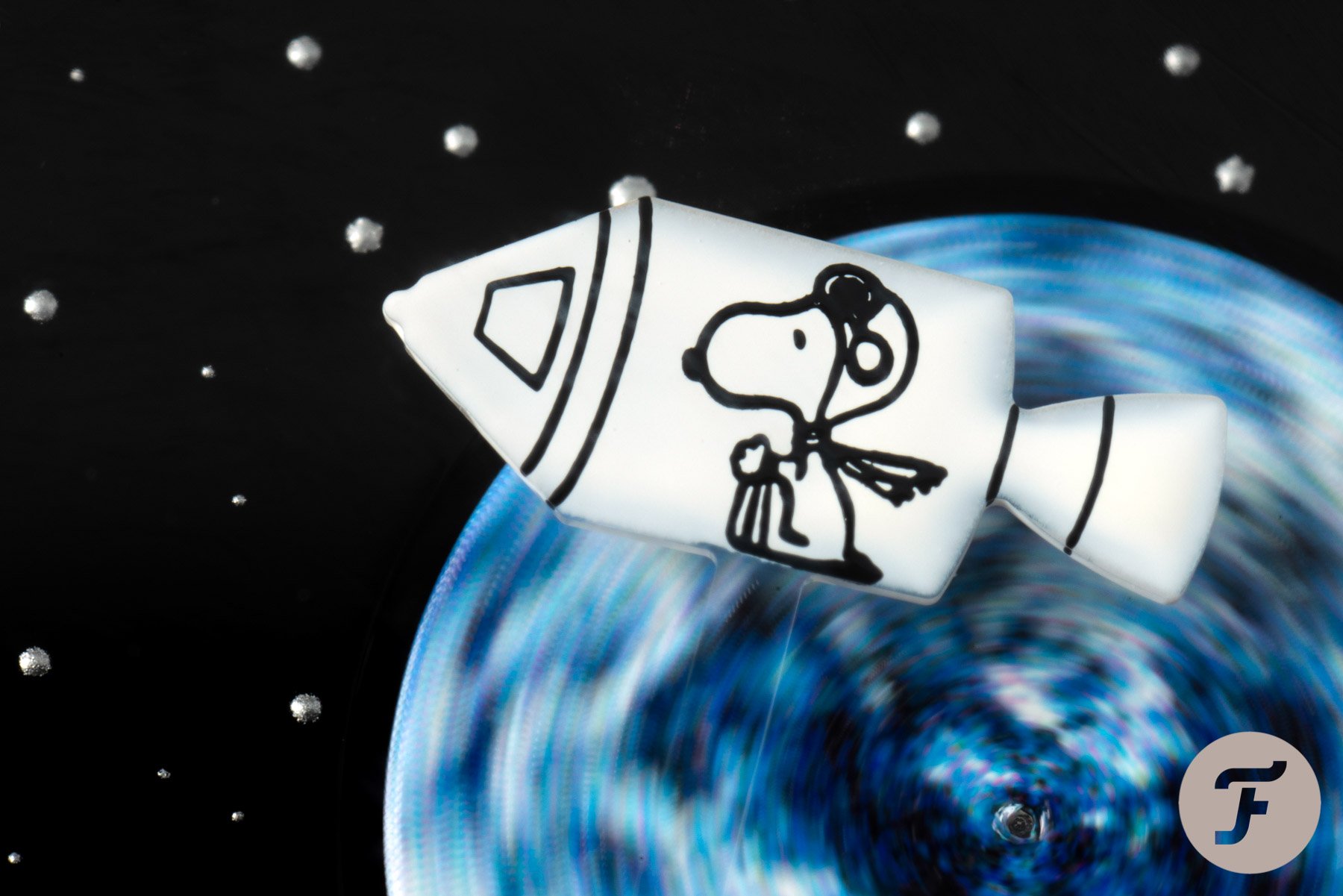 It is on the case back where the magic happens. There, an animation shows Snoopy in his spacecraft, appearing from behind Earth and flying over the Moon. The animation on the backside of this watch is connected to the central chronograph hand. Omega used lightweight aluminum for this hand to ensure there was enough torque to make the animation work. 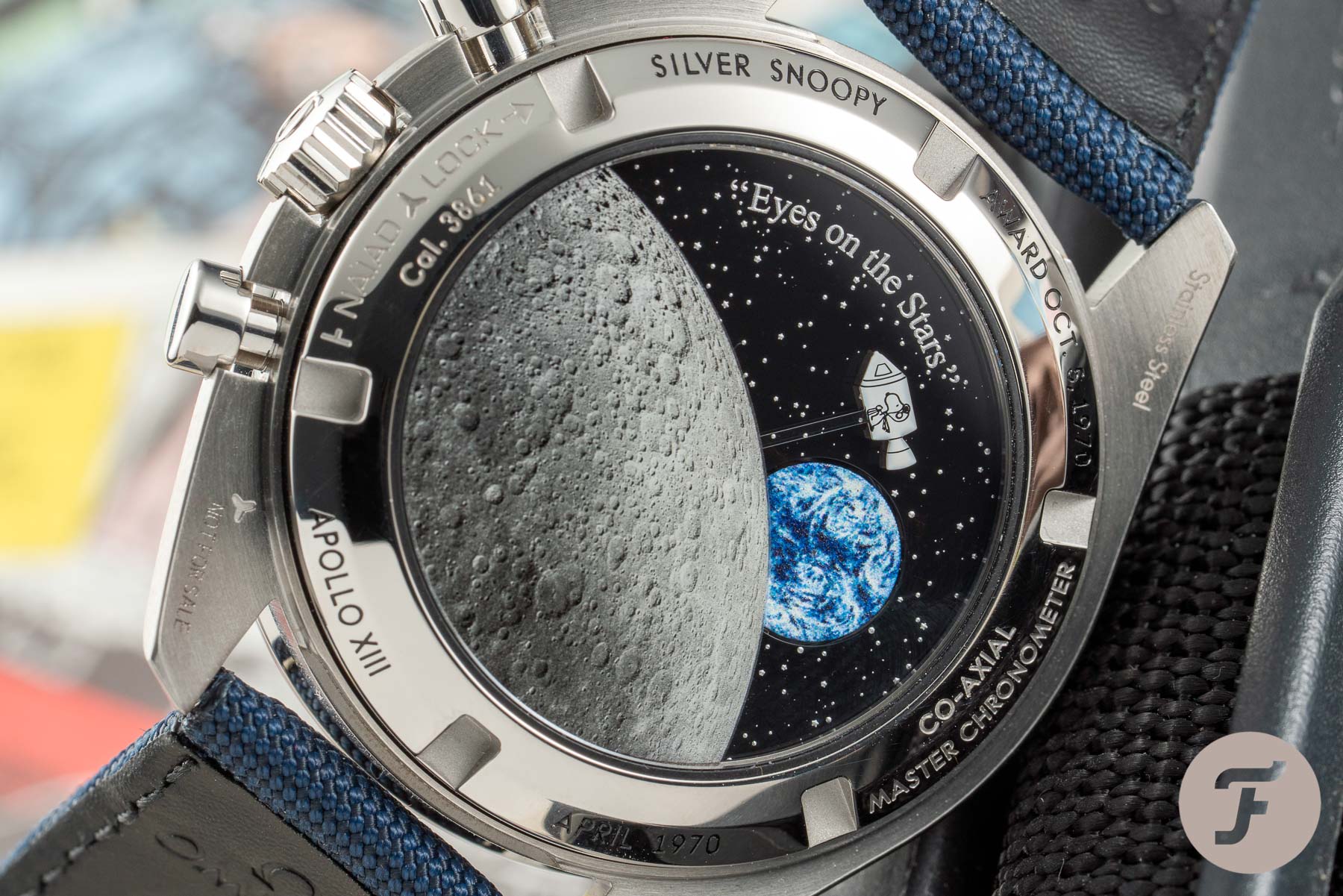 When I got home after purchasing the watch, I immediately played with the chronograph to observe the animation. This case back was vastly different than anything that had come before. The Silver Snoopy Award 45th Anniversary had a case showing a beautiful silver lapel pin replica of Snoopy on a bed of dark blue enamel with sprinkles of silver powder. The first Snoopy edition from 2003 had a picture of the Snoopy patch on the back of the case. Of all three Snoopy versions, the last one has the most exciting case back. 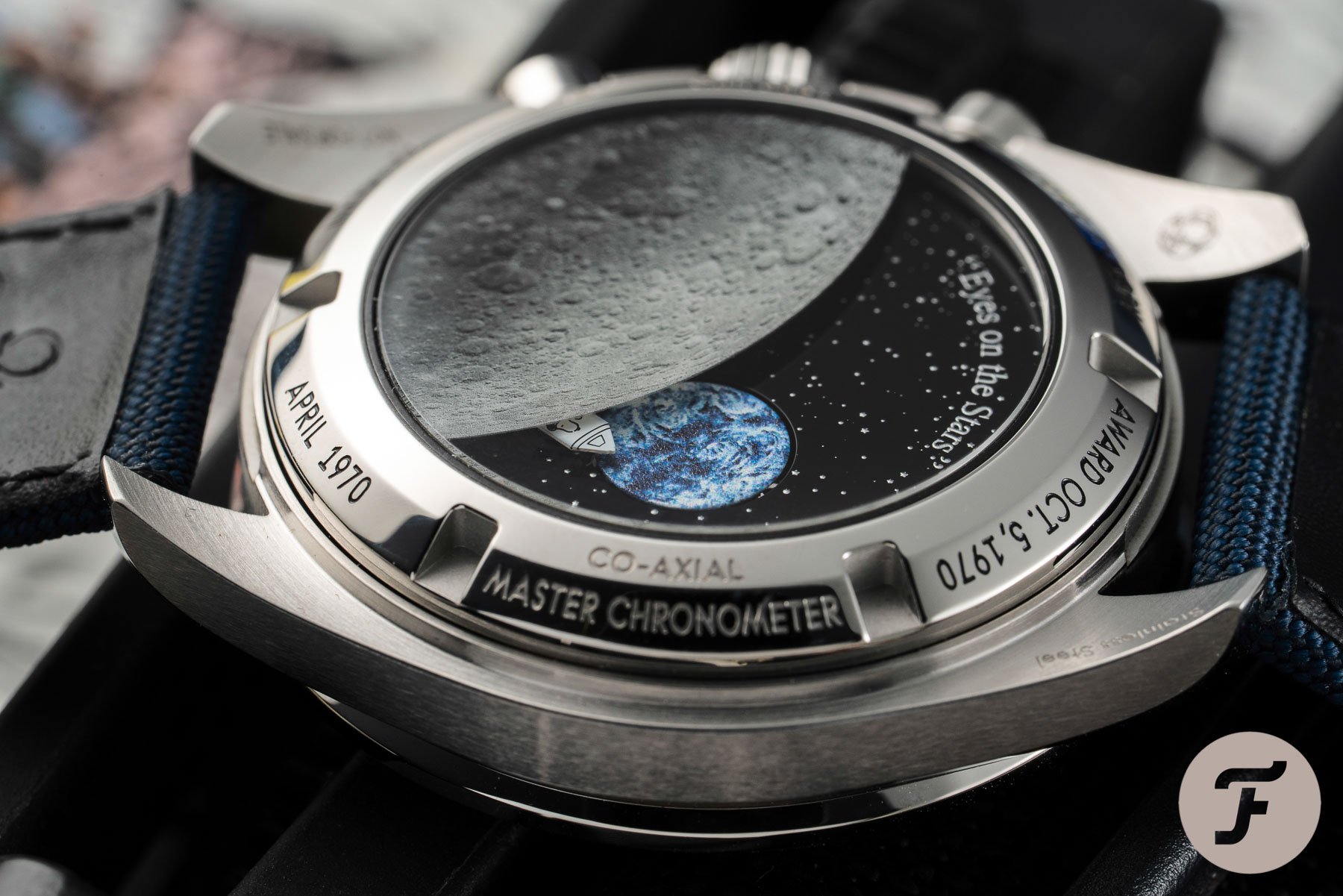 The astronaut Snoopy sits on a transparent hand that rotates just like the chronograph-seconds hand. Looking at the animation directly from above, it looks like Snoopy is floating on the back of the case. From other angles, you can see the transparent hand moving. Although a little gimmicky, it’s a nice “extra.” However, after a while, I stopped watching the animation, and from that moment onwards, it was all about the rest of the watch. 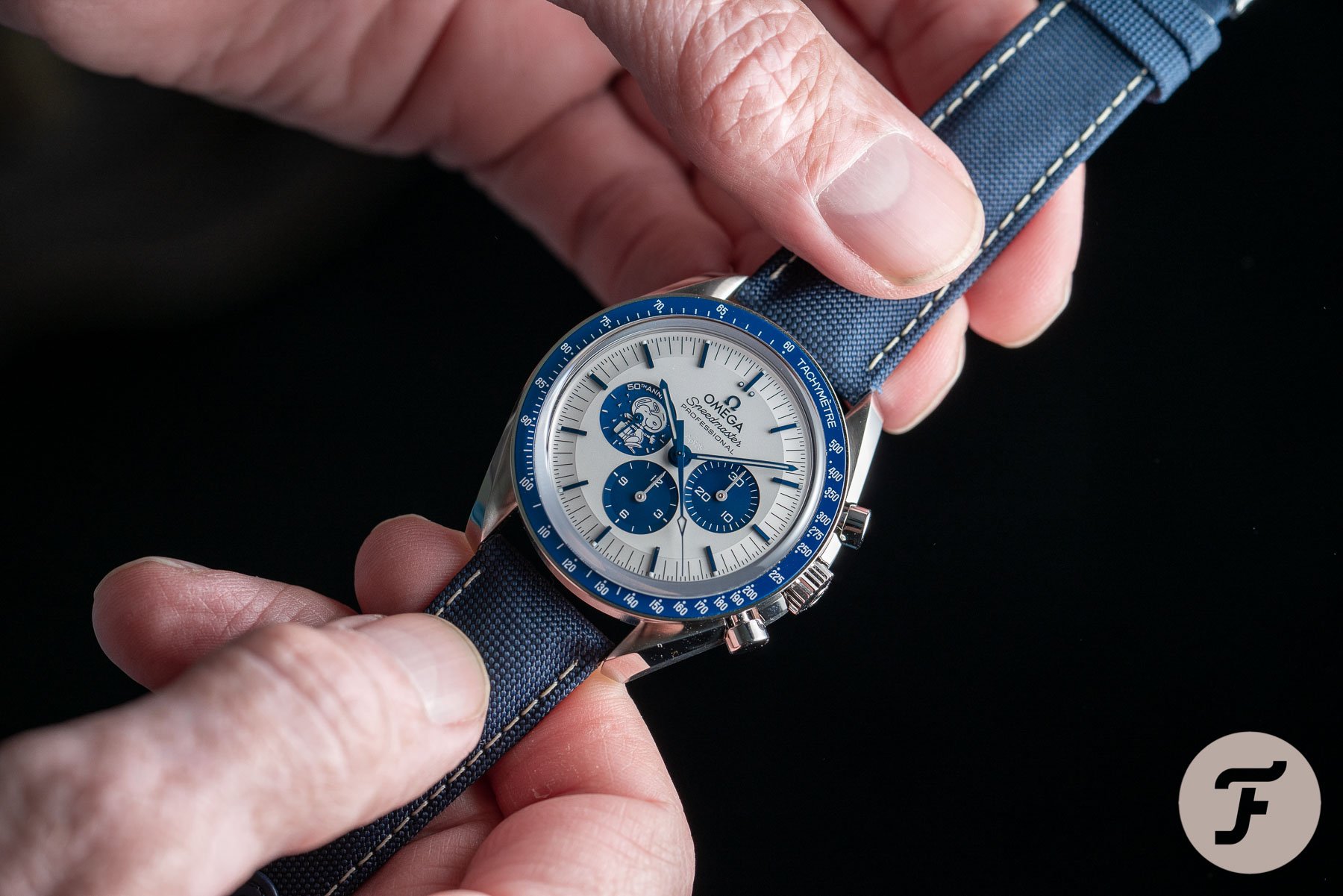 After receiving my Speedmaster Silver Snoopy Award 50th Anniversary, someone asked me how I felt about the stiff nylon strap that came with it. It seems very similar to the black strap that came with the 2015 Speedmaster Silver Snoopy Award, except that it is in blue and without a folding clasp. At first, I didn’t get what this person what talking about as the black nylon fabric strap was also a bit stiff at first but rapidly became softer after wearing it for a while. That wasn’t the case with the new Silver Snoopy Award, though. The blue strap was extremely stiff and remained that way. I’d even say that it makes the watch somewhat uncomfortable to wear. My colleague Ben also picked up his Snoopy, and the first thing he did was change the strap to a similar-looking blue fabric strap from Artem. 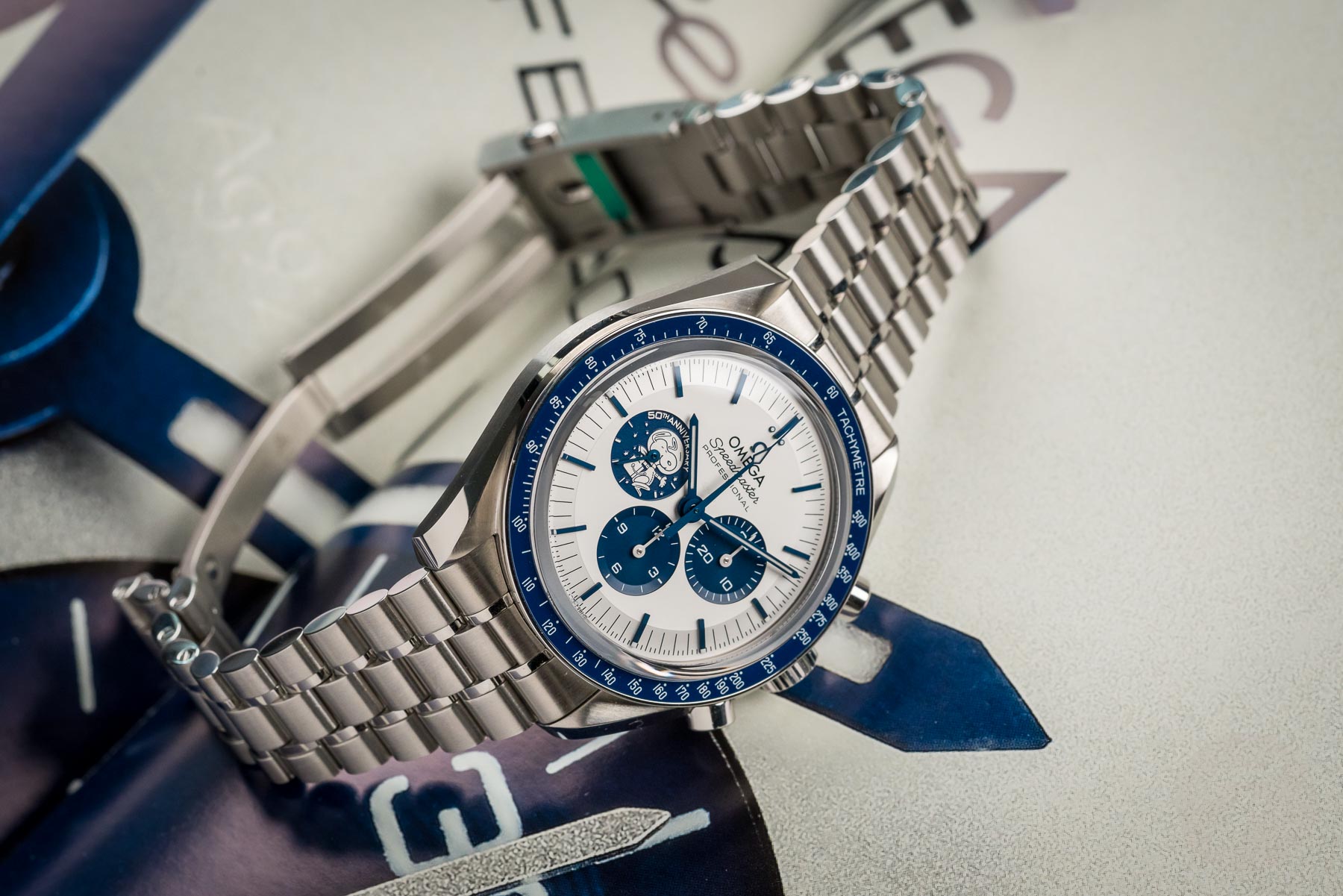 Putting it on the “Nixon” bracelet 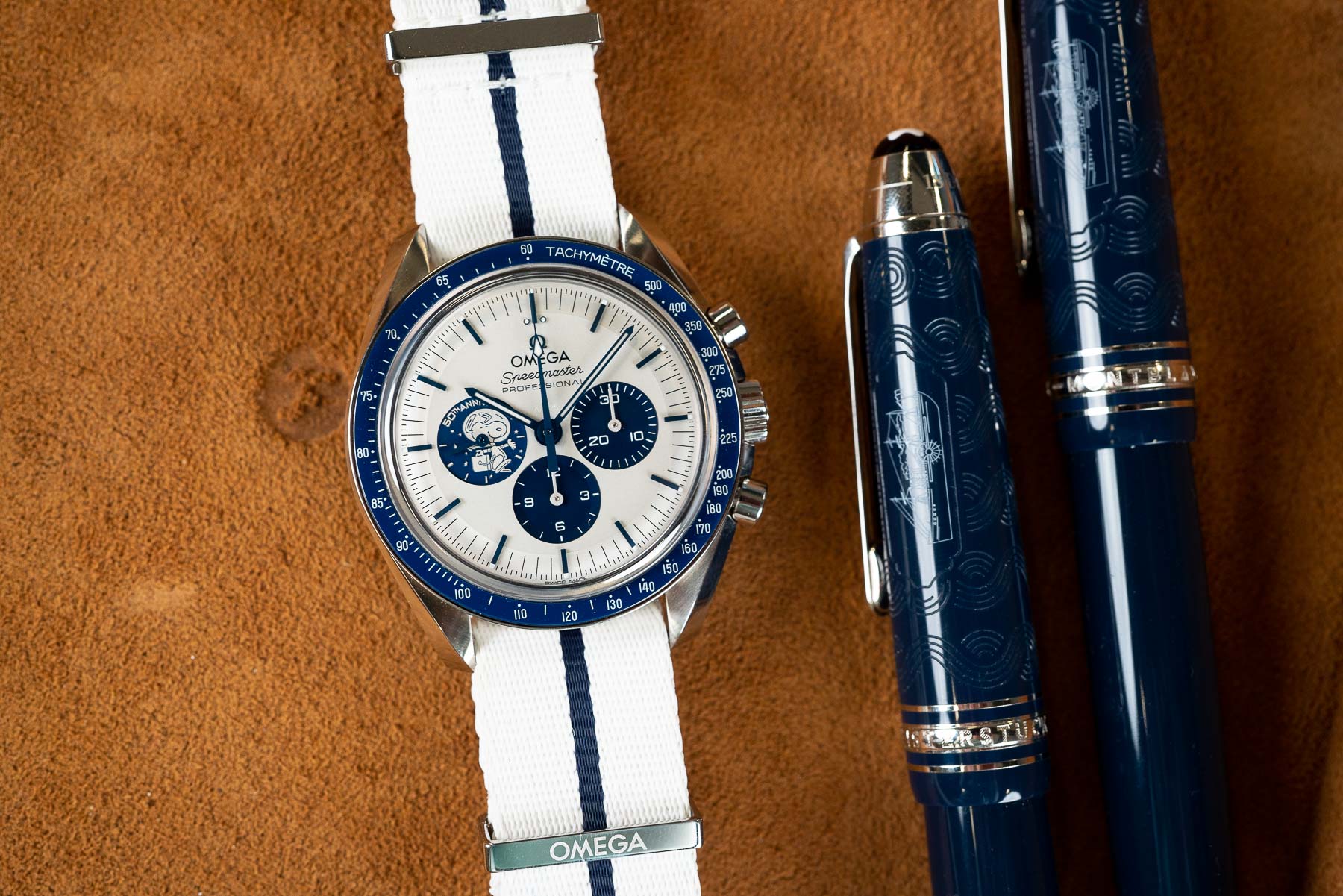 Or putting it on an Omega NATO strap

Later in the year, I also purchased a white NATO strap with a central blue stripe to match the dial. I got the tip from someone in the Omega boutique in Zürich and ordered mine online a few days later. The watch looks great on Omega’s NATO strap, but it also made me realize even more that the dial is not white but silver. On the original blue strap or the steel bracelet, it’s not that apparent. On a white strap, however, you will see that the dial is made of sterling silver. So make no mistake in thinking the dial is white and blue; it isn’t. Images of the watch can be a bit deceiving here.

The downside of wearing this watch on a NATO (or even the steel bracelet) is that it becomes more difficult to watch the animation on the case back. Compared to the bracelet, the advantage of the NATO is that you can take it off within a few seconds, watch the animation, and put it back on. The case back is always perfectly centered, though, thanks to Omega’s NAIAD lock technology. 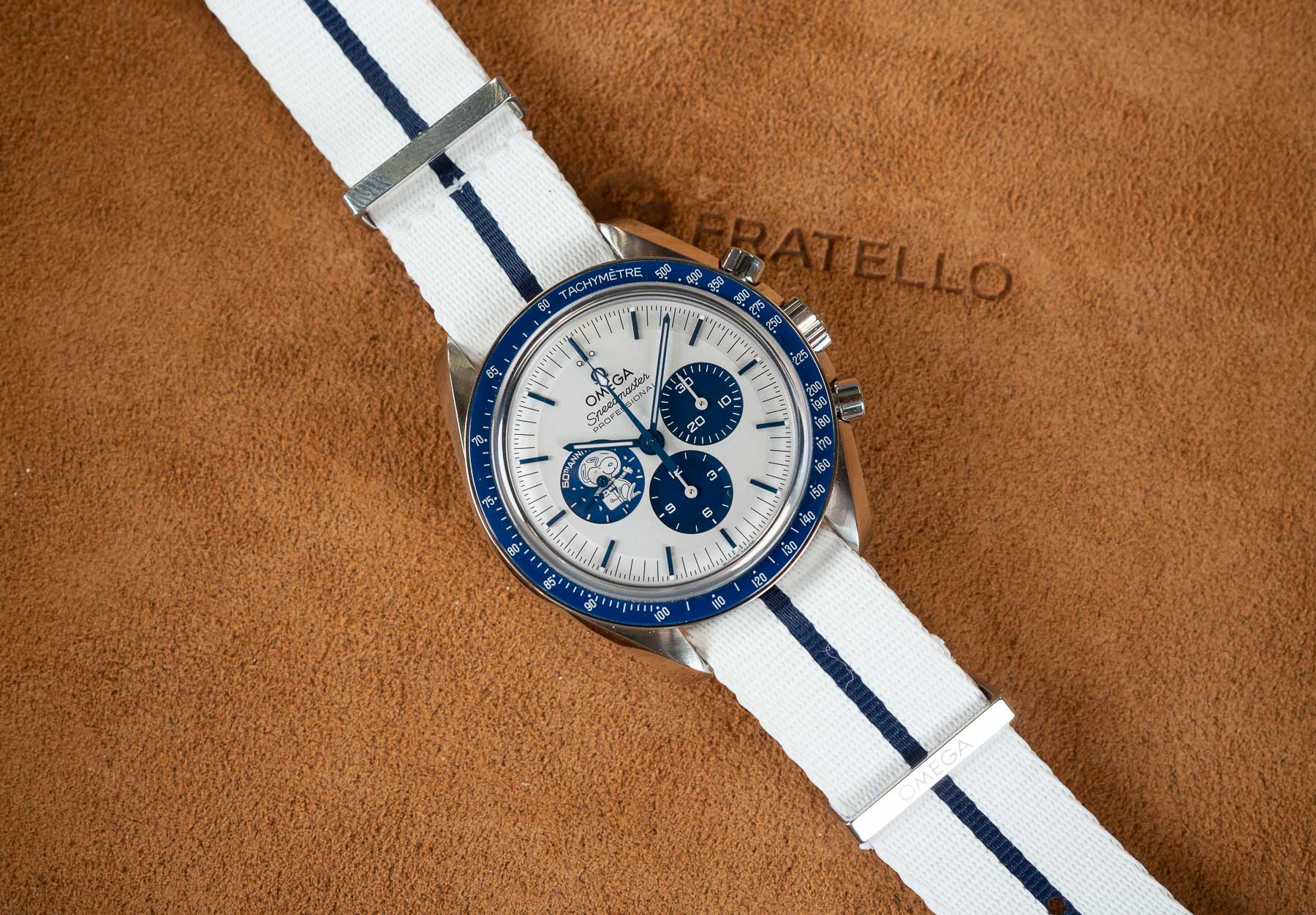 What I love about the Speedmaster Silver Snoopy Award 50th Anniversary is the silver (Ag925) dial. The blue/silver combination is pretty awesome, and because blue is my favorite color anyway, it matches a lot of my shirts and sweaters. I love the astronaut Snoopy on the 9 o’clock sub-dial even more than I love the sleeping Snoopy on the Silver Snoopy Award 45th Anniversary edition. This one is simply more on point. Unlike the modern Speedmaster Professional models, this watch has no step dial (but a bevel). The step dial is a design feature that disappeared in the early 1970s with ref. 145.022-71 and returned with the introduction of the Speedmaster Speedy Tuesday “Ultraman” in 2018. At the time, Omega used an aluminum base material to put the step back on the Speedmaster dial. In recent years, however, Omega also found a way to create the step dials in brass (again). 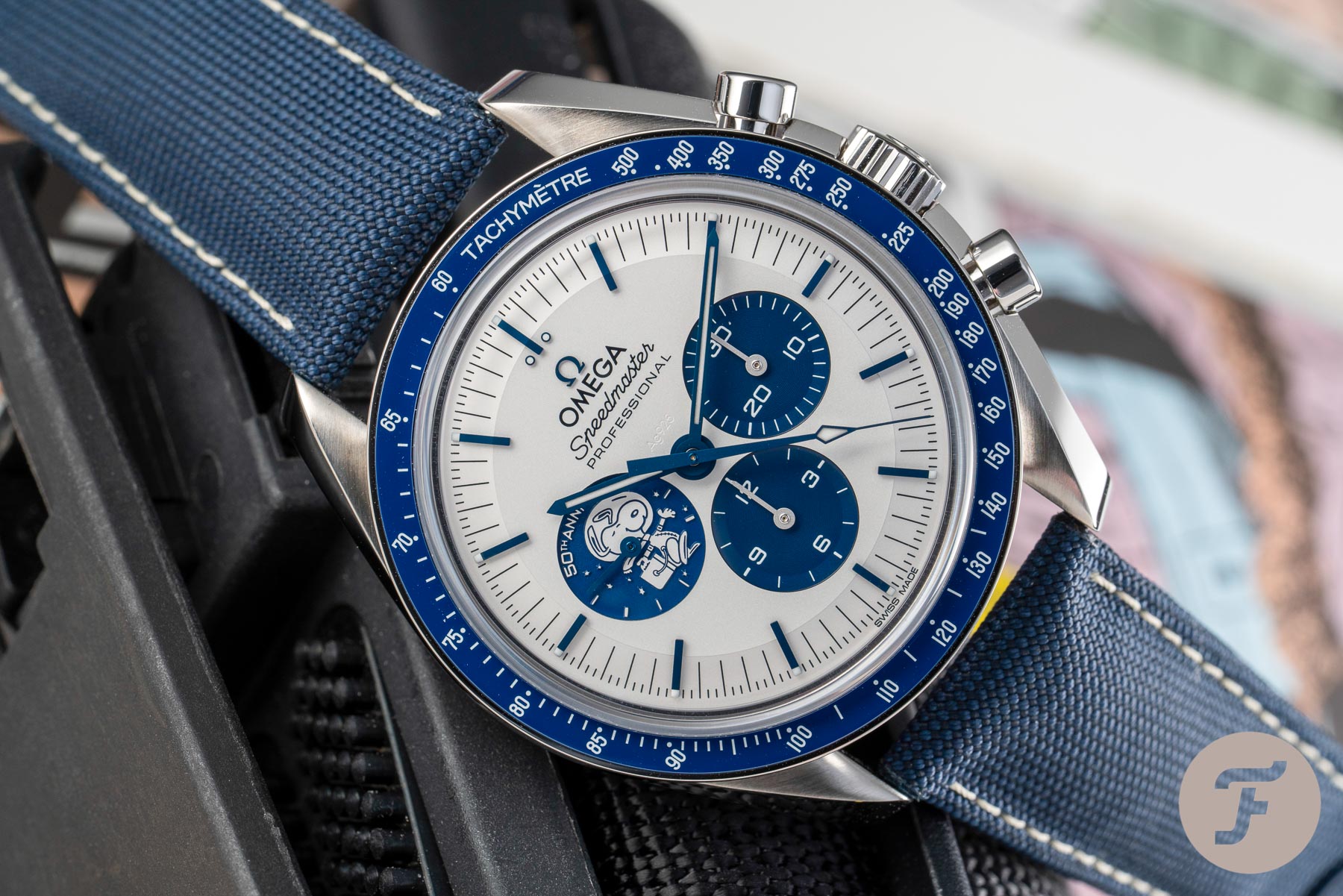 Normally, I prefer the most basic version of the Moonwatch. That means I always go for the standard model with a Hesalite crystal and steel case back. This is also why we chose a Hesalite crystal, aluminum bezel, and closed case back for both Speedy Tuesday editions. However, for specific editions, like this Silver Snoopy Award 50th Anniversary, I don’t mind the sapphire crystal and ceramic bezel. The blue ceramic bezel matches the blue PVD-treated hour markers and hands as well as the blue sub-dials. 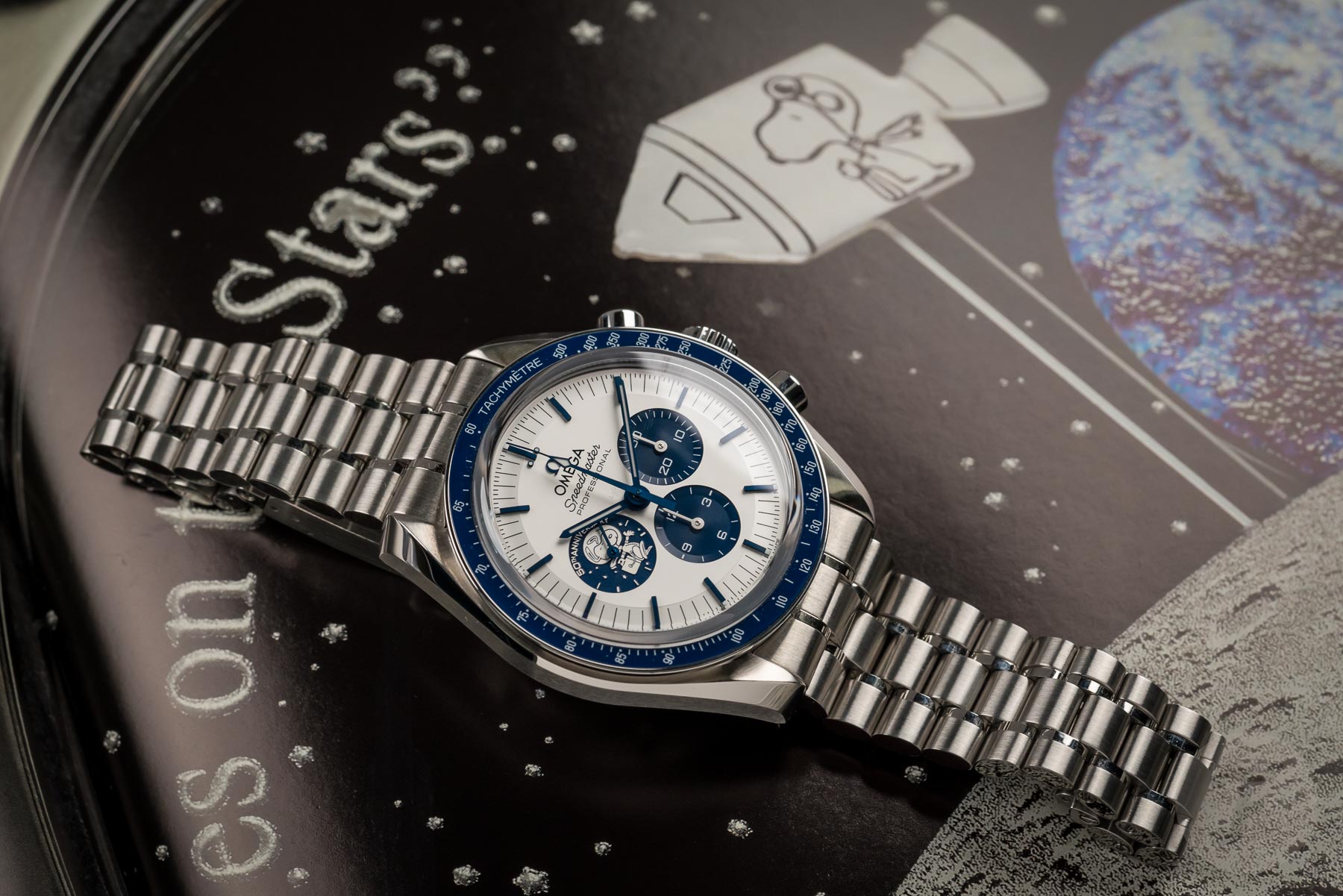 Price increases since its introduction

When Omega introduced this watch, the retail price was €9,600, only to increase to just over €10,000 in early 2022. And just recently, the price increased once more to €10,800. To be clear, if you ordered this watch in 2020 with a €9,600 price tag and are still waiting for its delivery, the current price is the one you need to pay to the boutique or authorized dealer.

A price of over €10K for a Moonwatch variation is something I am not entirely used to. That said, the market price for this watch is about €24,000 according to Chrono24 and $23,700 according to WatchCharts. I would love to see Omega keeping the Speedmaster Professional under €10K (~CHF/USD 10K). It always was one of the more accessible Omega watches while being one of the coolest. It would be a pity to make it completely unobtainable for a large group of fans.

At the peak in Q2 2022, the going prices were above €30,000. It seems that speculators also bought the Speedmaster Silver Snoopy Award 50th Anniversary, as they did its predecessor. I never completely understood this behavior as the watch is not discontinued and is available to those with (a lot of) patience. The price development did not stop me from wearing this watch like just any other watch in my collection. I am not planning to sell this watch, and I bought it because I like it. To me, it is still a ~€10K watch, and the market price is just that — the price people are willing to pay (or ask) for it on the gray/pre-owned market. 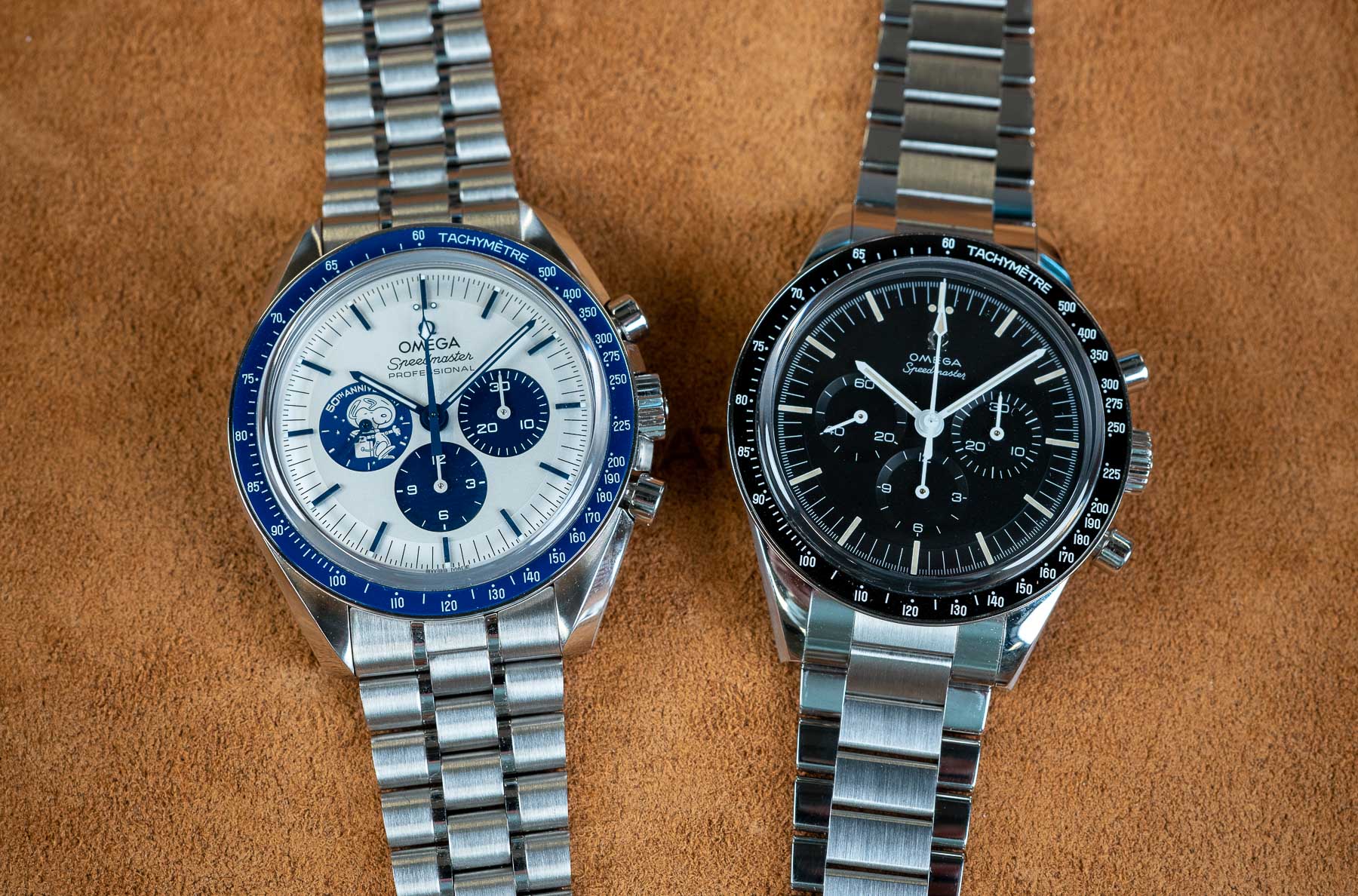 Snoopy on the left, Calibre 321 on the right

The whole craze for this watch is interesting to witness because I do feel there are more interesting Speedmasters available. The same year, Omega introduced the Speedmaster Calibre 321, and it seems it is even more difficult to get. The retail price of that watch is higher, yet the market price is lower than that of the Silver Snoopy Award model. People often ask which one I like better, and I have to admit it’s the Calibre 321 model. It simply ticks more boxes for me. Still, the Speedmaster Silver Snoopy Award 50th Anniversary is perhaps more attractive to a wider audience. We already saw the broad appeal when Omega introduced the second Silver Snoopy Award model in 2015. It was one of the first times a Speedmaster sold out so quickly. 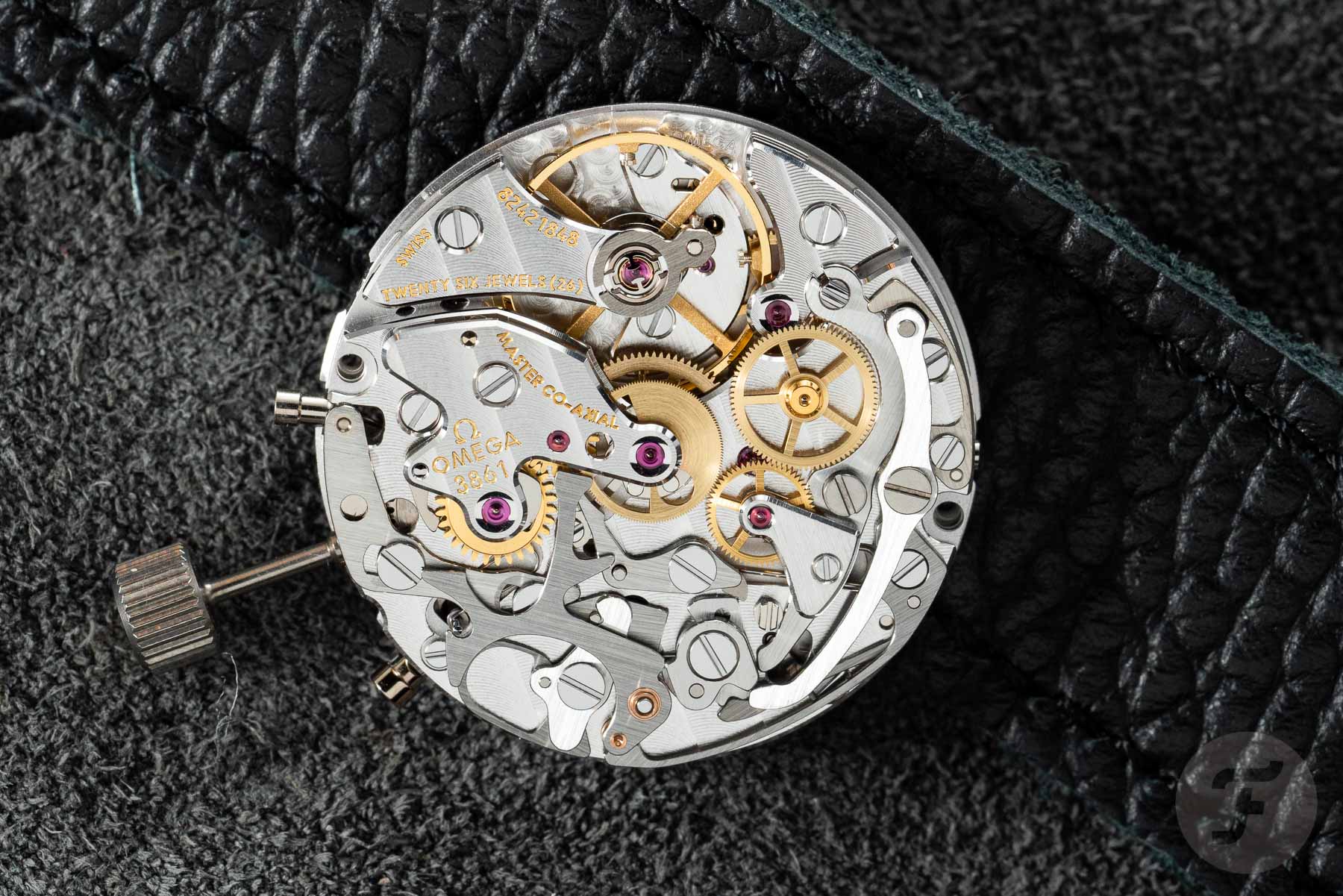 Although I’ve never felt the urge to put the Speedmaster Silver Snoopy Award on our timing device in the office, the caliber 3861 does keep time well. It’s a METAS-certified Master Chronometer movement, meaning it performs within 0 and +5 seconds per day on average. This movement also powers the current Omega Speedmaster Professional Moonwatch models and replaced the caliber 1861.

I’ve read some messages about teething problems (no pun intended) with the early caliber 3861s, but I don’t believe the movement had any large-scale issues. I’ve owned Speedmaster watches with caliber 3861 from 2019 onwards, and none of them have had any problems. That’s not a proper sample size, I know, but I have never experienced the issue of the movement stopping entirely after starting the chronograph. This wasn’t a chronograph issue but an issue with the power of the center wheel. Anyway, Omega had ironed it out by mid-2021, and the watches that experience this issue can be repaired under warranty. 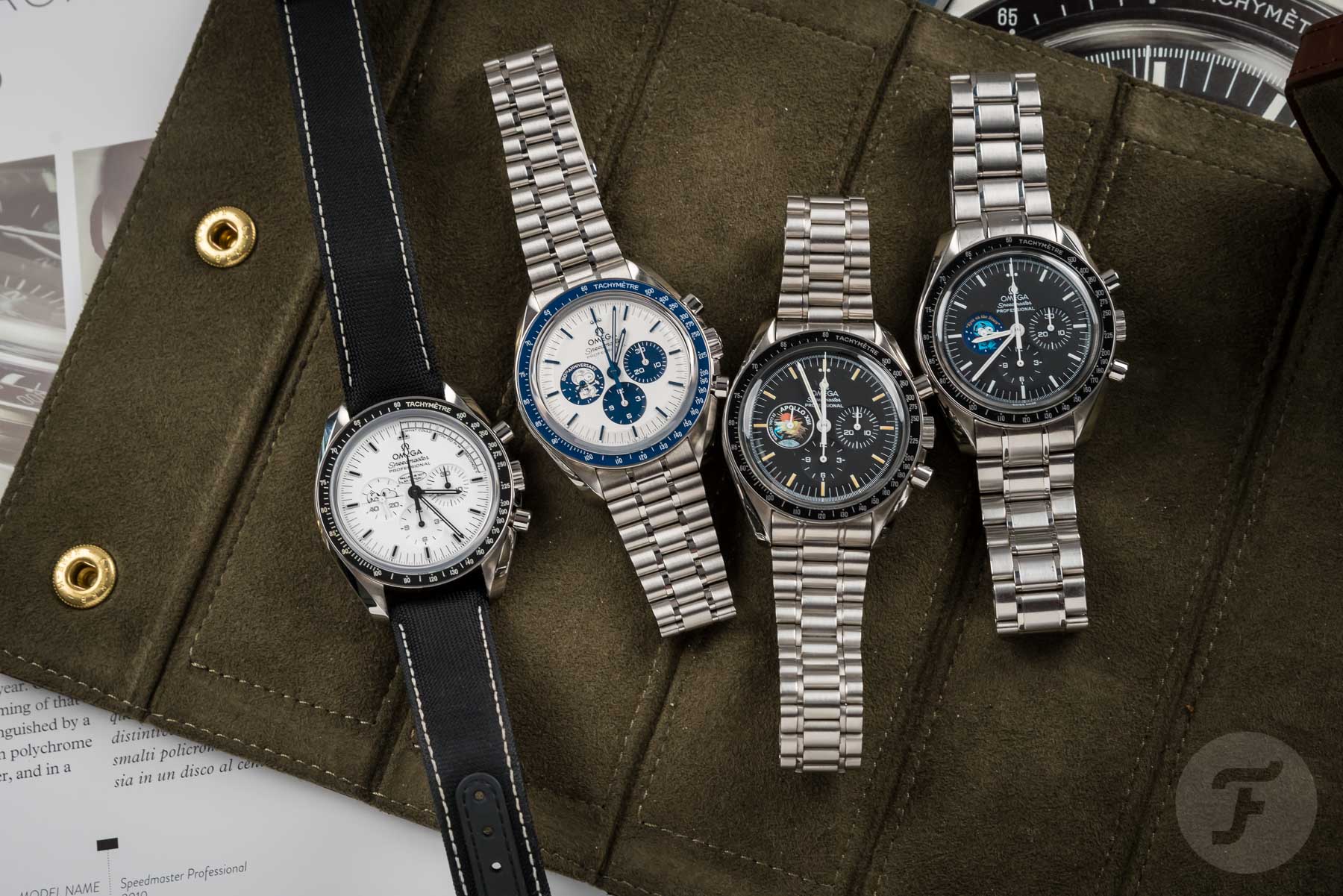 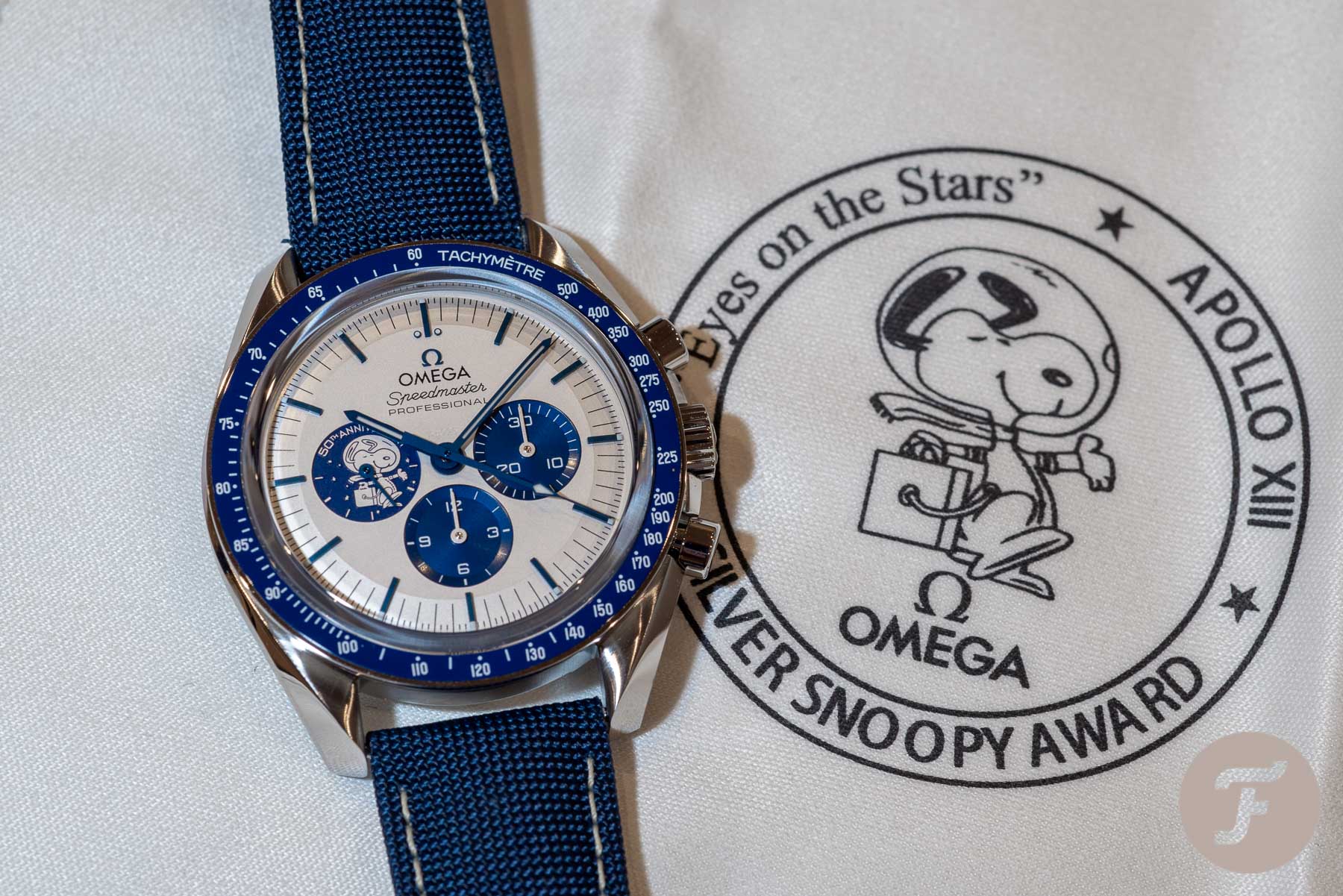 Despite slightly preferring the Speedmaster Calibre 321, I do enjoy the Speedmaster Silver Snoopy Award 50th Anniversary and wear it now and then. I also feel that it is worth its current €10,800 retail price since it is a special piece with an animation on the case back. The only criticism I have towards this watch is the stiffness of the strap, which didn’t seem to break in, even after weeks of wear. That’s quickly solved, though, with a nice alternative blue strap or Omega’s bracelet.