For a long time, quartz watches were to be neglected by the watch enthusiast. “Watches without a soul”, could often be heard. But that seems to be changing: meet the Longines Conquest VHP GMT.

Longines introduced their new collection of VHP watches in 2017, guaranteeing accuracy with a maximum deviation of 5 seconds per year. VHP stands for Very High Precision, and that’s exactly what it is. Already in the 1980s, Longines had their VHP quartz watches but they disappeared again at some point. In those days, the accuracy was impressive, but not what they promised back in 2017. Longines is not alone in their battle for the best (quartz) accuracy: Grand Seiko is pushing hard with their 9F quartz movements, Breitling has their SuperQuartz and recently Citizen broke the news with a Caliber 0100 movement that offers an accuracy of max. 1 second deviation, per year.

That watch, for example, and the Grand Seiko 9F models come with a certain price tag that not everyone is willing to spend on a quartz watch, let’s be realistic. You really need to appreciate these watches (and these quartz movements are incredibly nicely finished) in order to part with your money.

Enter Longines. The Longines Conquest VHP GMT we have here today has a price tag of €1200,-. On top of the very accurate movement, it offers a GMT function. For the frequent traveller, this might be an accurate and easy-to-use companion. It is also a watch that can be used for all occasions. Sometimes you don’t want to wear a high-value GMT watch when visiting particular regions in the world, but you do want to have something nice and usable on your wrist.

The Longines Conquest VHP GMT is a bit deceiving, as it appears to be a very elegant watch on the pictures, but its size will classify it rather sporty than elegant. A diameter of 43mm is not for everyone, for sure. Good news, there’s also a version with a diameter of 41mm. 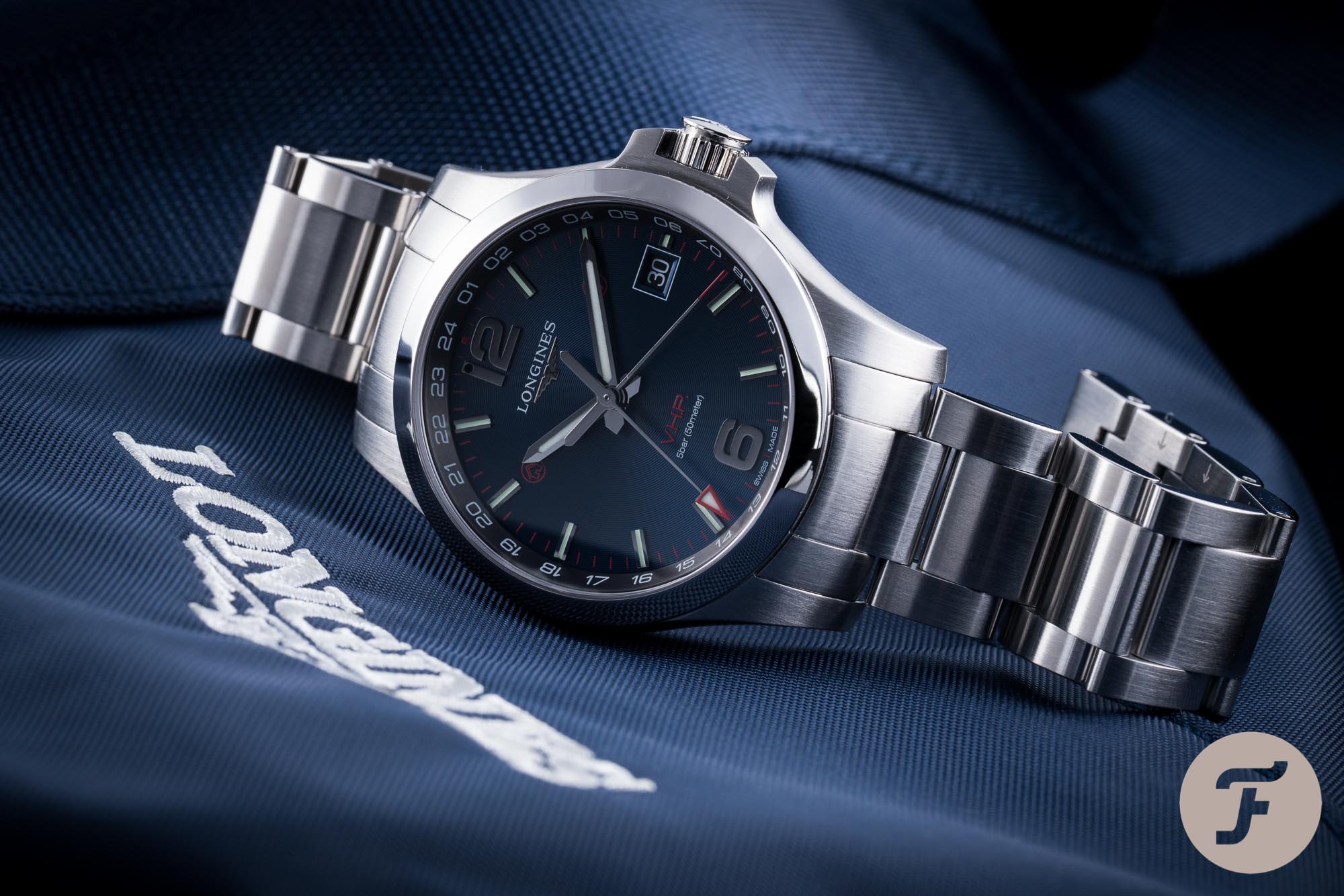 We went with the all stainless steel version, with a beautiful blue dial. Longines offers a lot of variations, including black PVD coated watches with carbon dials, so there’s something to choose from. Our Longines Conquest VHP GMT has reference L3.728.4.96.6 and has the caliber L287 movement. This movement is based on ETA’s caliber E56.411 and offers an accuracy of 5 seconds deviation per year. As for functionality, besides the hours, minute and seconds there’s the date and the extra timezone indicator. To set the extra time zone, you can use the pusher in a somewhat traditional way, but also use their ‘flash setting’ which needs the use of your smartphone. Basically, the watch has two ‘modes’. A home time mode and a travel time mode, which you can switch to using the crown as a pusher. You select the mode and then set the time for that specific mode. This way, you can switch between your home time and local (travel) time, any time you want.

It receives the codes that are being transmitted and then the movement will change the time(s) how you’ve defined it on your phone. Clever.

Let me start by saying that I am not a fan of using all sorts of apps on my phone to control my watch. Especially when you need to establish a bluetooth connection or whatsoever. A watch should be able to work autonomously, which the Longines Conquest VHP GMT does as described above. However, setting or managing the time on a GMT watch can be confusing (and time-consuming) for some people, so the Longines app for setting the watch comes to the rescue. You set the home time in the app, you set the travel time in the app and click ‘Send’. You need to keep the watch in front of your smartphone’s camera, and the phone will then transmit all relevant information using the flash-light of your camera/smartphone. As you can see on the dial, there’s a small hole in the ‘1’ of ’12’. This ‘eye’ receives the codes that are being transmitted and then the movement will change the time(s) how you’ve defined it on your phone. Clever.

Longines is really making sure that accuracy is not affected.

GPD stands for Gear Position Detection, meaning that the watch will keep perfect timekeeping, even after the watch has been exposed to magnetic fields or shocks. After such an impact, the hands will reset and show the correct time again. Longines is really making sure that accuracy is not affected. Not by changing time zones but also not by the things that might affect perfect timekeeping during daily use. Clever. Again. 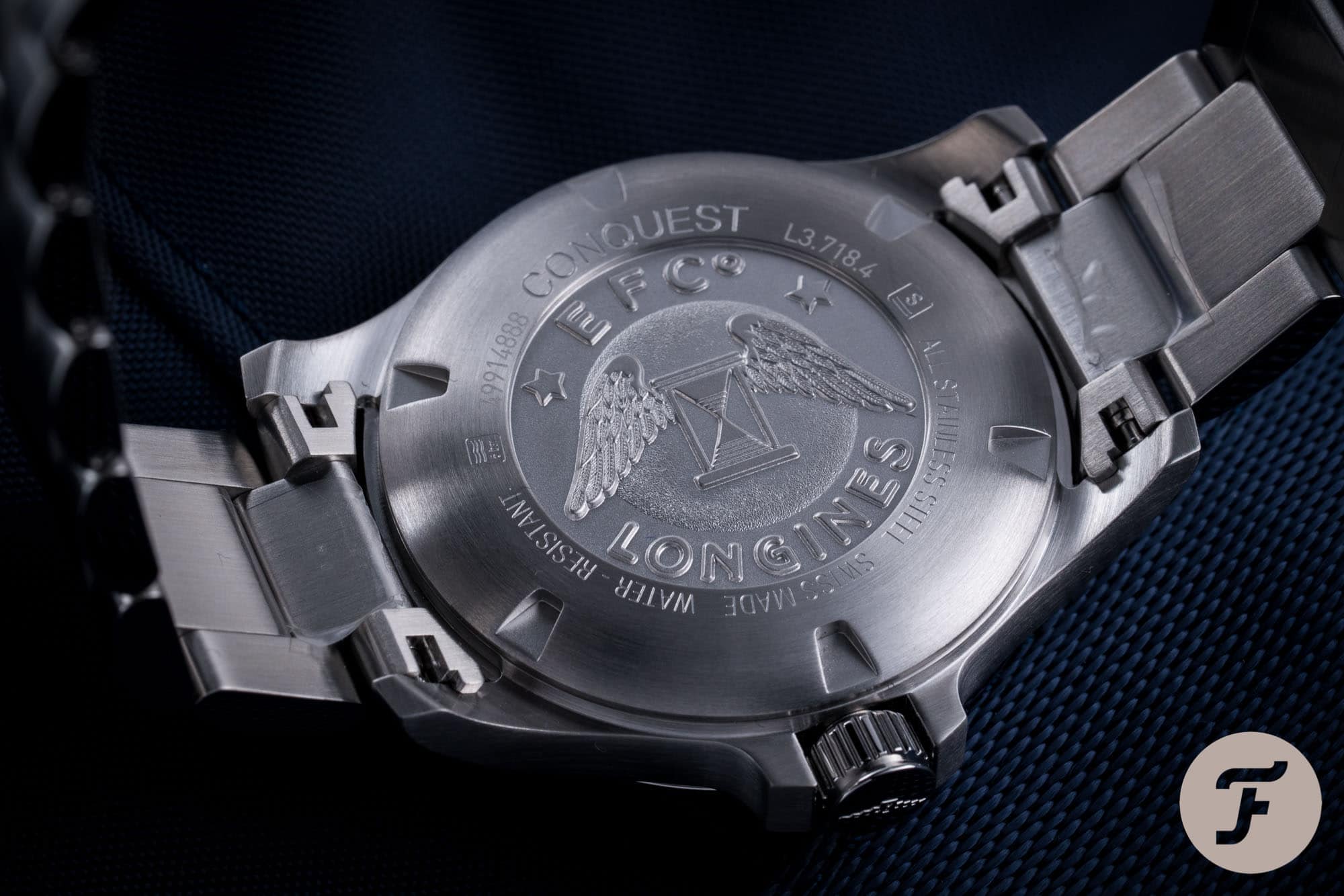 That’s not all that’s included in the €1200 package, of course. The movement also has an End-of-Life indicator, which more quartz watches have, but also ensures to have enough energy (on one battery) for 4.5 years. Another nice function is that you don’t have to worry about correcting the date on the first of the month, as this Longines Conquest VHP GMT boasts a perpetual calendar (till 2399). 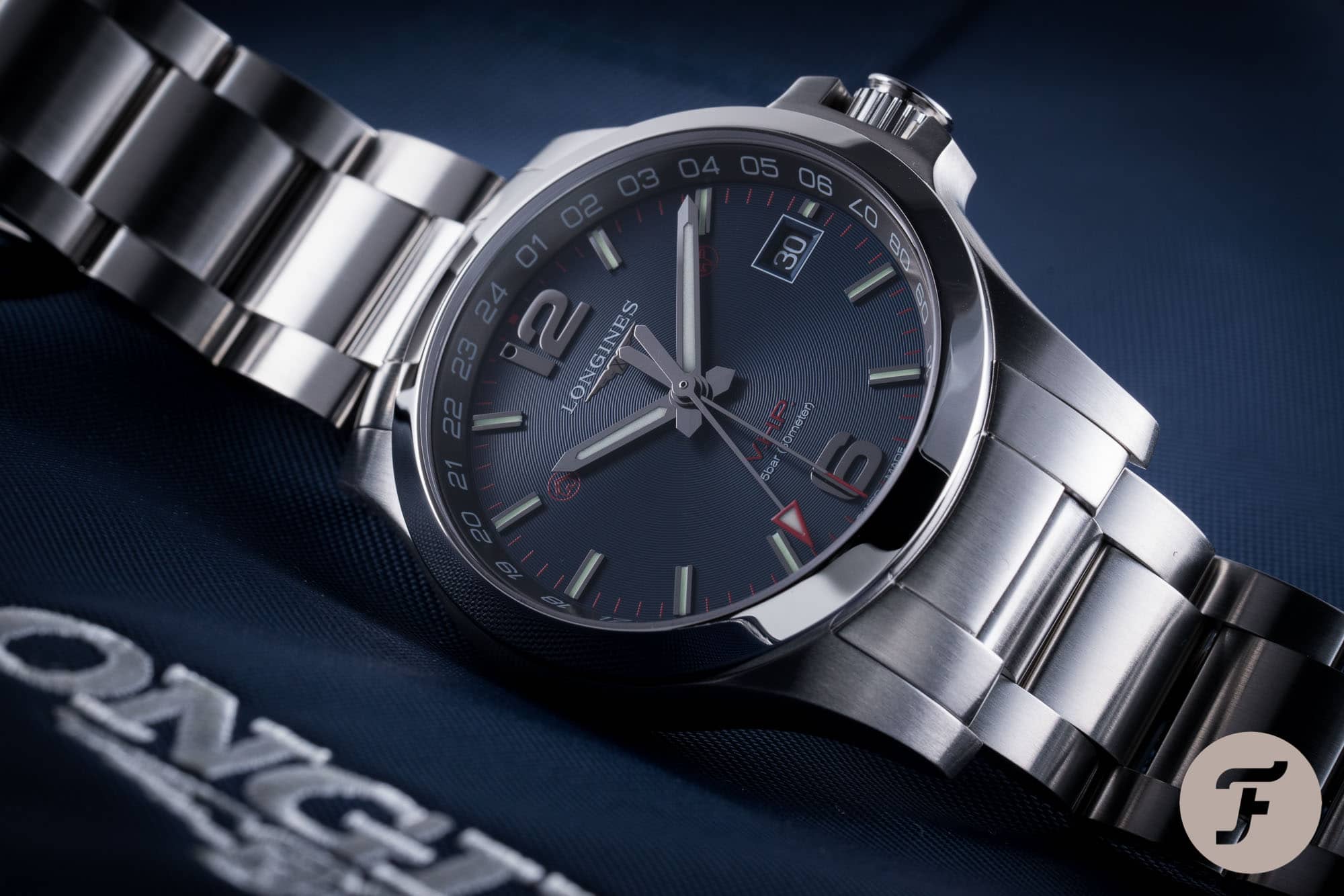 However, there’s also more on the things that it doesn’t have, of course. For a watch that is in one’s sports collection, the water-resistance of 50 meters is a bit ‘meh’. Especially when you want to do the occasional jump in the hotel pool for example, or swim in the sea, during one of your travels, the last thing you want to worry about is your watch. A 100 meters water resistance would have given the buyer more confidence in using it anywhere near the water.

The finishing on this Longines Conquest VHP GMT is nicely done, but not something to rave about. It is what you’d expect from Longines, and in this price range. The watch feels solid and the bracelet sits comfortably on the wrist for sure. The blue dial has a nice circular pattern which adds some ‘chic’ for me. I had to get used to the shape of the minute and hour hands, as they are quite wide. For reading time, they work great though and in the end (after a few days) I did get used to it.

I don’t want to emphasize too much on the finishing of the watch, it is up to the standards I would have for everything up to €1000-€1500. The main attraction in this watch is in the functionality and accuracy in my opinion.

The Longines Conquest VHP GMT is not a new watch (I wonder what is new from Longines for 2019, it has become very silent around them as they left Baselworld last year), but I thought it would be nice to see and try the VHP GMT. I do wonder a bit what Longines is up to for 2019 though, except for the new Legend Diver we didn’t see much.

Collecting watches and quartz movements can go together pretty well, but I am not sure the Longines Conquest VHP GMT is a collectable. It is a watch for everyday use, for those who simply want to have a good and accurate watch. The GMT function and its flash setting operation are especially convenient for those who travel a lot. €1200 is still quite a bit of money for a quartz watch, but Longines did a very solid job on the case, dial and bracelet of this watch and the movement inside is not just an ordinary quartz caliber. An accuracy of 5 seconds per year is quite an achievement in this price category.

The water-resistance of just 50 meters is a topic I already briefly touched, I feel they could do better here, especially to serve those who like to take a swim with their travel companion. The 43mm felt a bit large on my 18cm wrist, but luckily Longines also has a 41mm diameter version in their collection.