Longines has a long-standing history, and this year marks its 190th anniversary. Reason enough for a proper celebration! Earlier this year, we were already very impressed by the Longines Ultra-Chron Diver with a high-beat movement, but this time, the brand is introducing something completely different. It is a slim dress watch with a 40mm diameter and a case thickness of just 9.35mm. More importantly, I think, it has no date display. Often, a date display kind of ruins a good dress watch. The Longines Master Collection 190th Anniversary watch comes in three versions, all with different materials and dials. There’s the steel version we have here for you, and Longines also decided to create two Limited Edition models in gold — 190 pieces in rose gold (reference L2.793.6.73.2) and 190 pieces in yellow gold (reference L2.793.8.73.2).

The steel Longines Master Collection L2.793.4.73.2 is not a limited piece and is just in the regular collection. To me, the cool thing about this dress watch isn’t that it is relatively thin and only has three hands; it’s also the sandblasted silver dial with 12 beautifully engraved numerals and a vintage Longines logo. The blue hands contrast nicely with the silver dial and are perfectly readable, at least during the daytime. 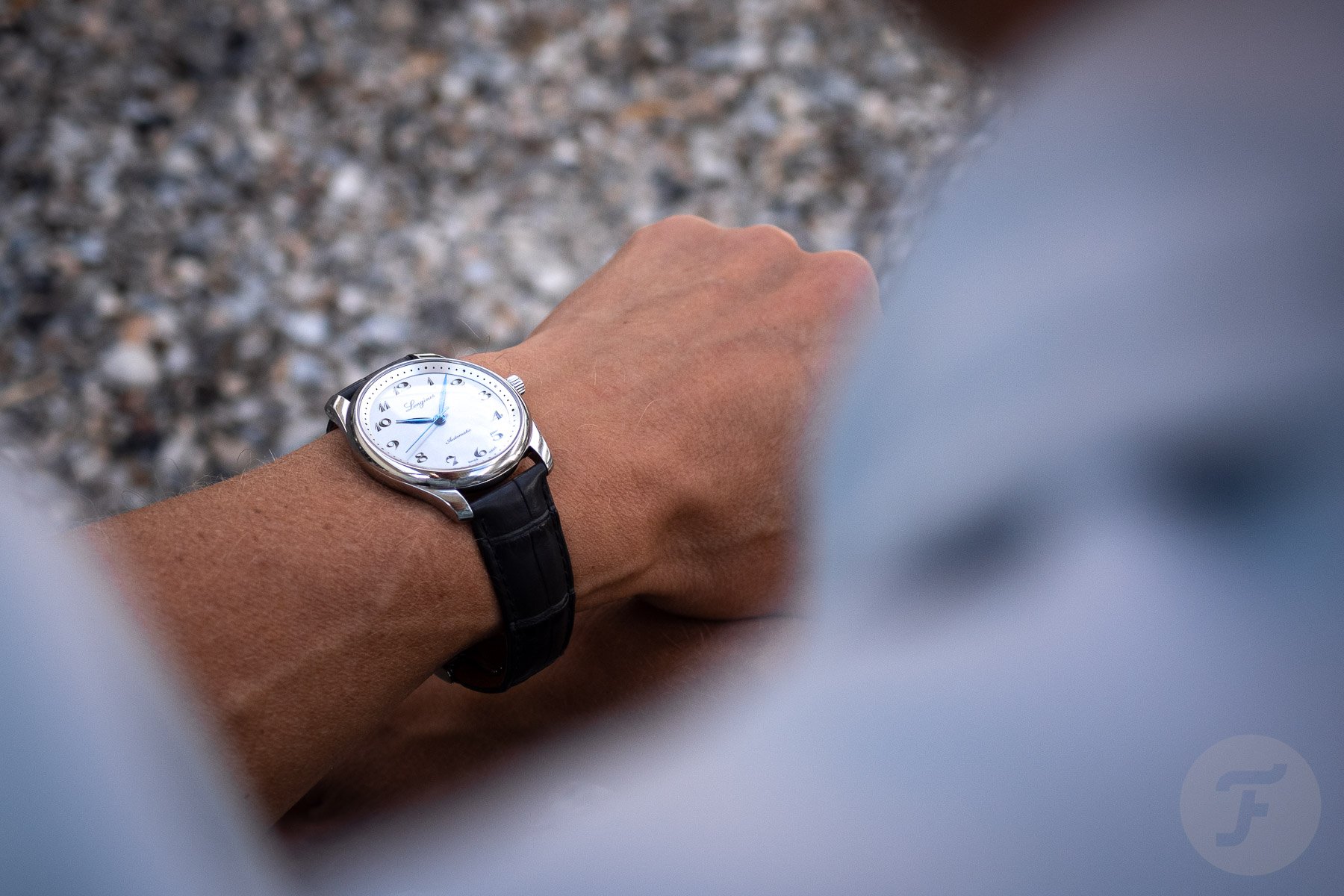 But, first things first. Longines is celebrating its 190th birthday. And that’s something! Though it’s not as old as Blancpain (which was founded in 1735!), Longines has been around longer than many other big brands, including most Swatch group brands like Tissot, Hamilton, and Omega. August Agassiz and two partners founded the Swiss watchmaking company in 1832 in Saint-Imier, the exact town where Longines is still located today. Longines has developed a lot of movements throughout its history, the first being caliber 20A in 1867. The brand’s first chronograph movement, caliber 20H, was introduced 11 years later. In 1888, Longines received its first chronometer certificate. However, the one movement you might know best from Longines is the 1936 caliber 13ZN chronograph.

However, the one movement you might know best from Longines is the 1936 caliber 13ZN chronograph. Longines has a long history in watchmaking, even though the brand stopped developing and manufacturing calibers in 1984. Instead, Longines has been co-developing brand-exclusive movements with ETA for a while. Though perhaps these are not considered in-house, they’re not that different from other brands (Oris and Tudor come to mind) that claim to have manufacture movements. 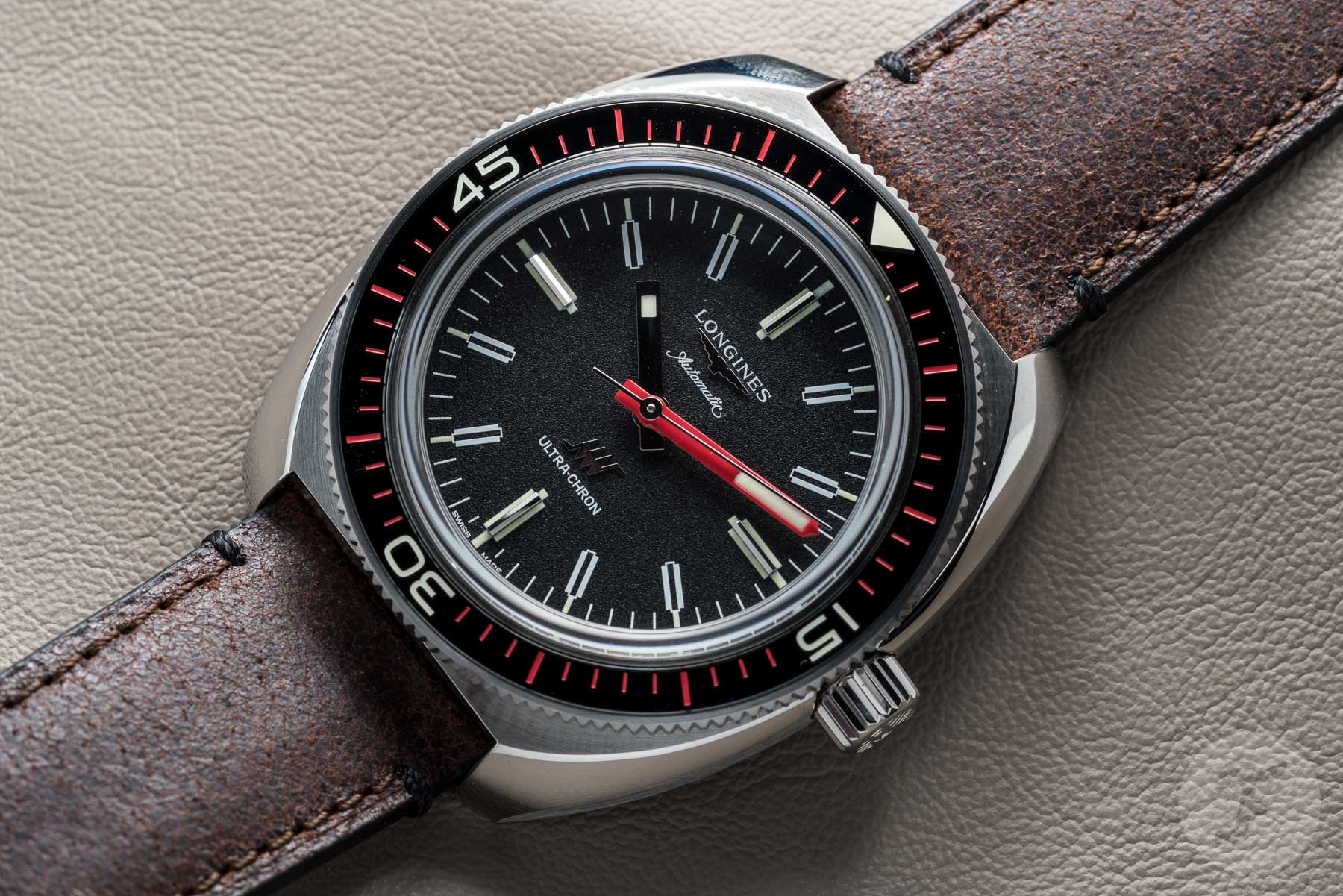 The high-beat movement inside the new Ultra-Chron Diver and the GMT movement inside the Spirit Zulu Time are examples of these new co-developments. Since Matthias Breschan became CEO in 2020, Longines has been more involved with developing the exclusive Longines movements. And now, to celebrate the company’s 190th anniversary, there’s a new dress watch in town. 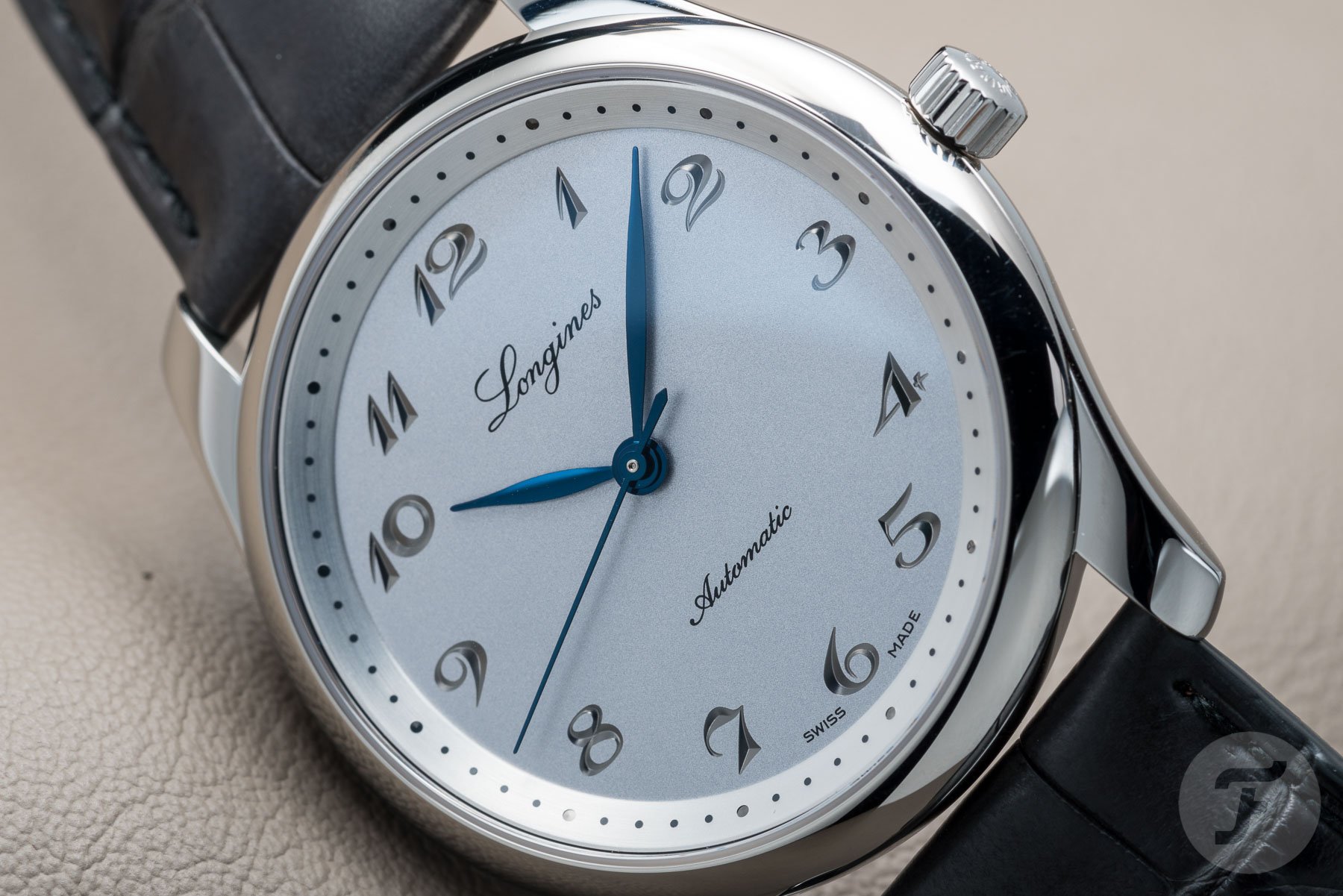 The Longines Master Collection has been around for approximately 20 years and can often be found with some kind of complication — a moonphase, chronograph, or calendar, for example. But to commemorate Longines’s 190 years of watchmaking, the designers decided to show that they can also come up with something simple in the best sense of the word. The three-hand Longines Master Collection 190th Anniversary is a 40mm dress watch that measures only 9.35mm in thickness. That doesn’t make it an ultra-thin watch, but it is extremely wearable. 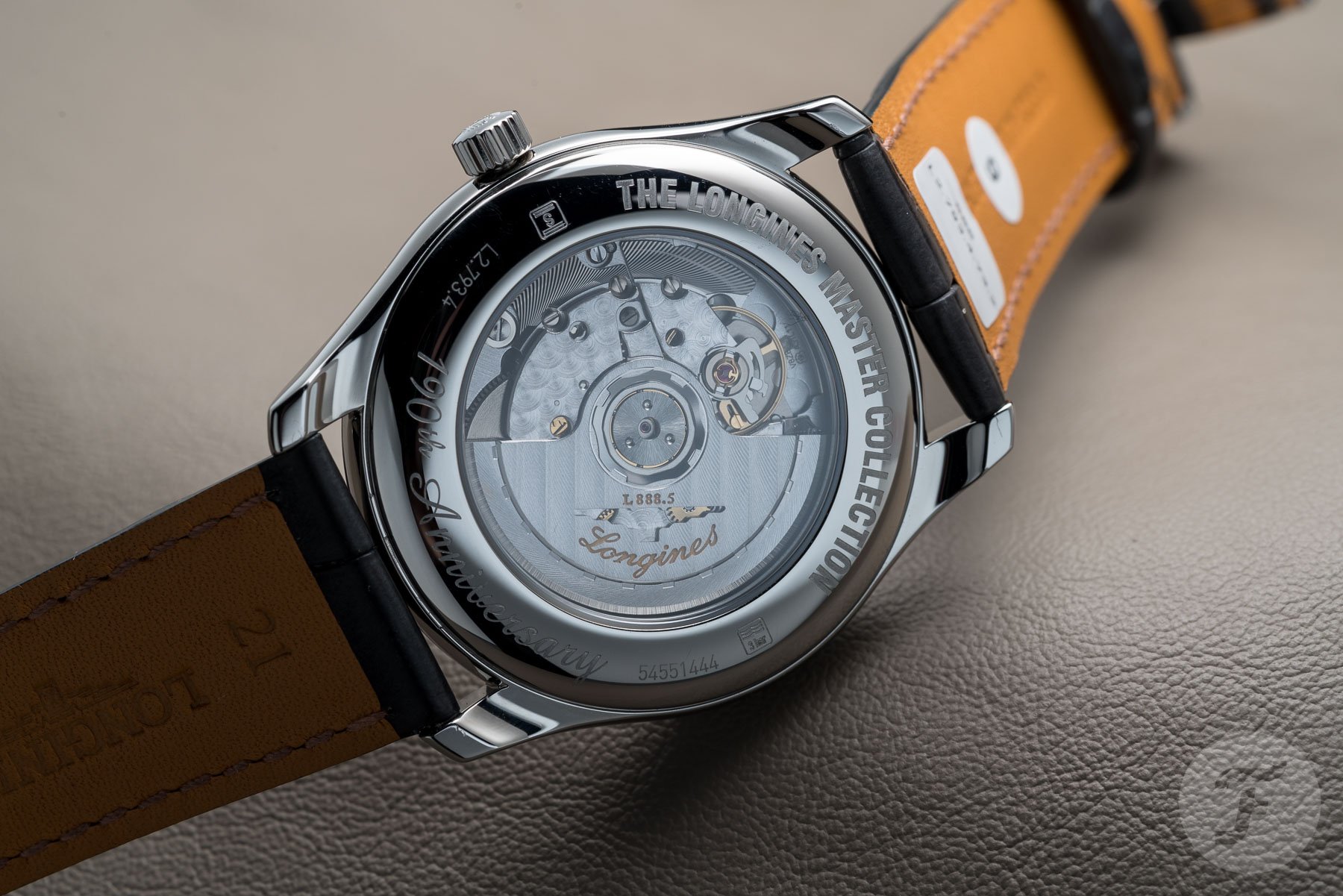 The movement can be admired through the sapphire case back. It has a caliber L888.5 inside, a self-winding movement with no less than 72 hours of power reserve. It comes with a silicon balance spring and ticks at 25,200 vibrations per hour. The movement has been decorated with perlage finishing on the main plate, and the rotor has Côtes de Genève decoration and has been engraved with the Longines logo. I am sure that the Longines fans will appreciate these things. 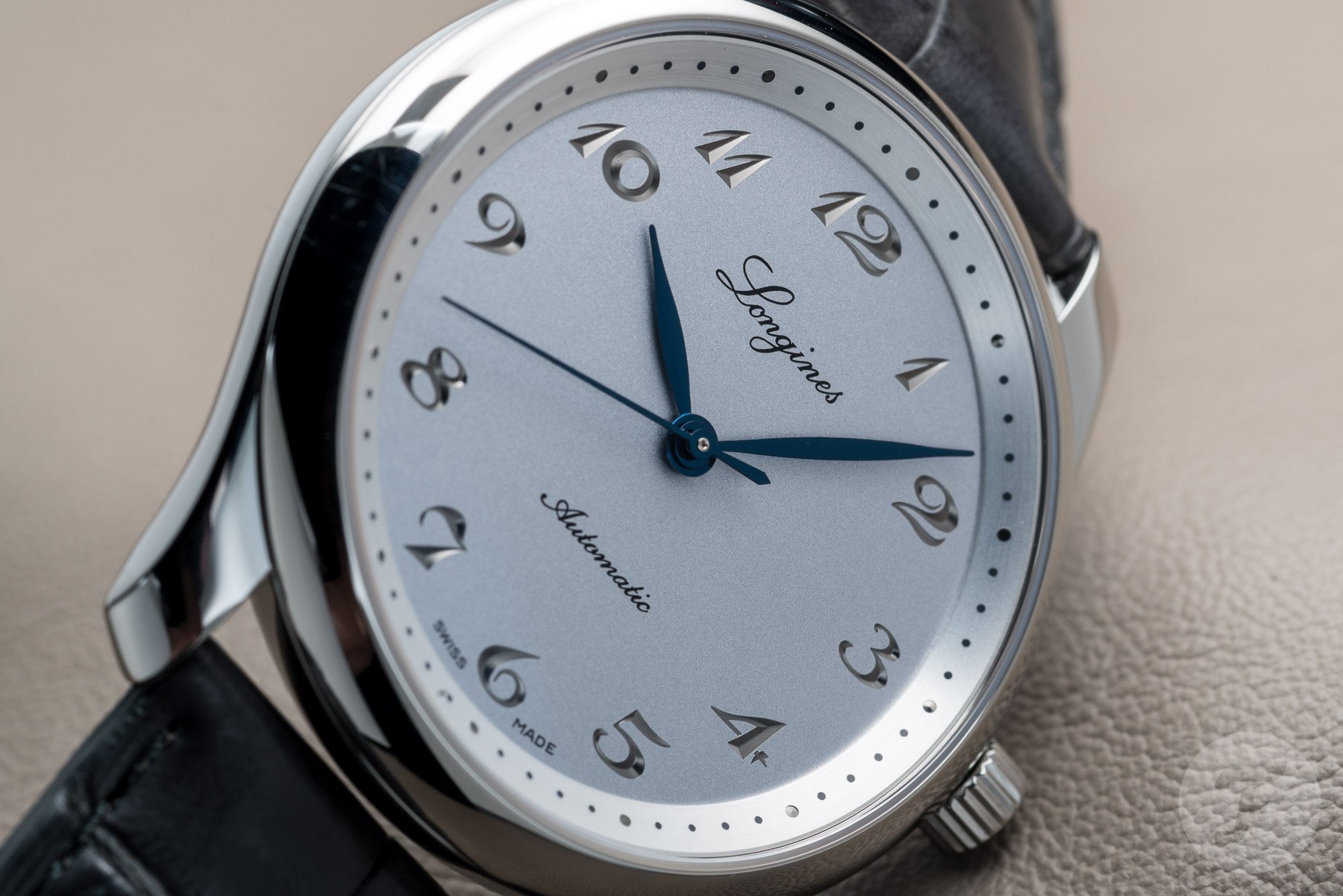 However, my main attraction is the beautiful sandblasted silver dial with engraved Arabic numerals. It’s something I can’t recall Longines doing before, and the result looks incredibly cool. The yellow gold version of the watch has a vertically brushed gray dial, and the rose gold comes with a grained gray dial. All versions feature engraved Arabic numerals as well as the vintage Longines logo in cursive script. 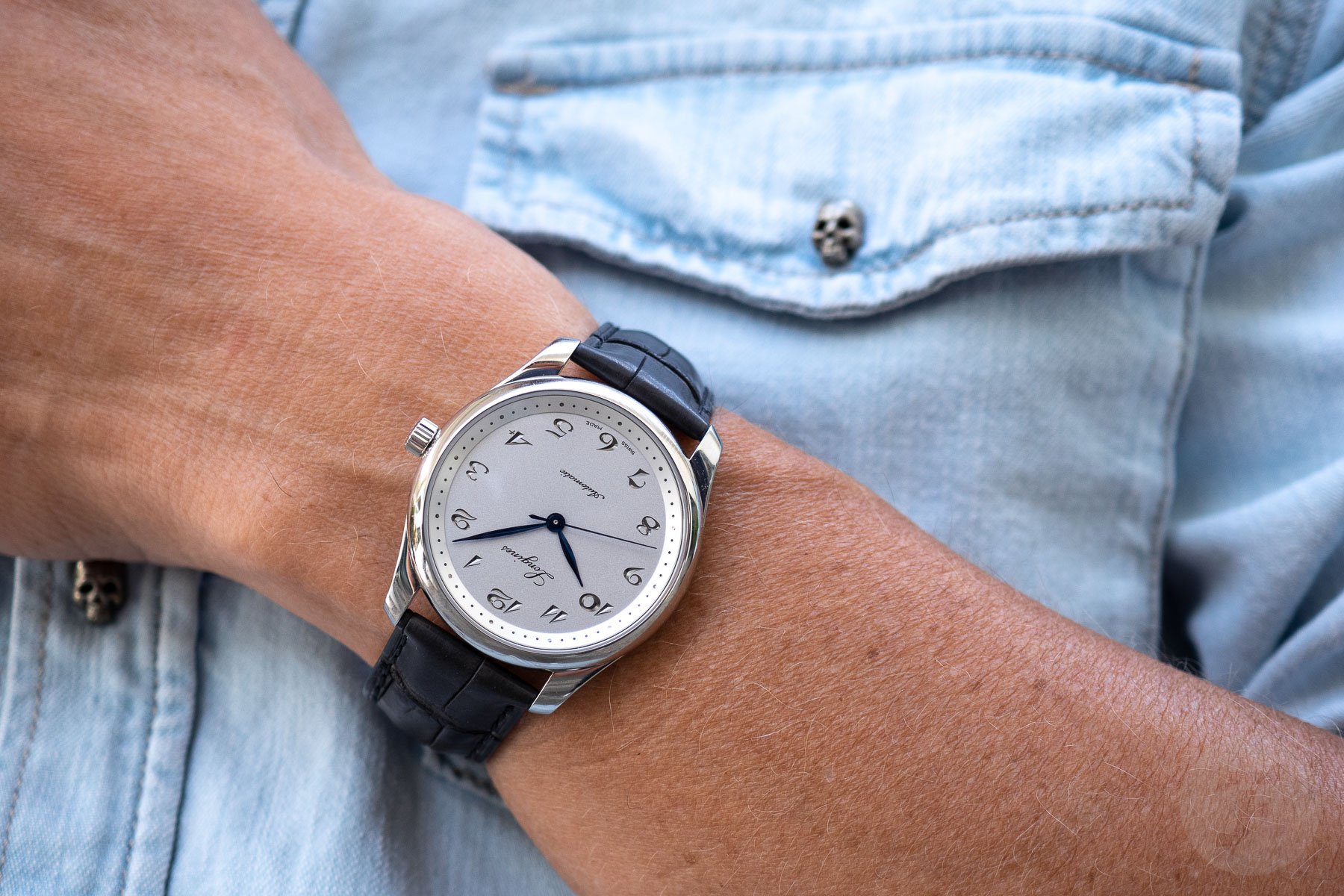 All three Longines Master Collection 190th Anniversary models have a water resistance of 30 meters, but you weren’t planning to swim with a dress watch anyway, were you? Longines has put all three watches on an alligator strap with a folding clasp. The steel version is a nonlimited edition with a retail price of €2,300 / $2,400. The gold models are limited editions of 190 pieces each. But according to the Longines website, they’re sold out anyway already. The price of the gold models was €11,550 / $12,000.