Last year after BaselWorld, I visited Louis Vuitton to see their new collection of watches and I was quite impressed by their high-end collection and absolutely stunned by their new Travel Watch: the ‘Escale Worldtime’. Louis Vuitton stands for traveling and it speaks for it self that the brand had to come up with a great – and different – world timer watch. Well, they did. The presented ‘Escale Worldtime’ is in every aspect completely new and unique: a world timer without hands, where all functions are being controlled over the crown! Reading the time on the watch has absolutely nothing to do with any other world timer that is on the market. At first it isn’t really easy, but after taking the time and effort on how to read it, one gets used to it quickly. The superb looking 41mm white gold case deserves some mentioning too. It’s a new design, that fits in next to the ‘Tambour’ and ‘Speedy’ cases and it has a very classic look.  The lug construction resembles the old round Louis Vuitton trunks. The watch was presented as a limited edition, priced at around €50K Euro. 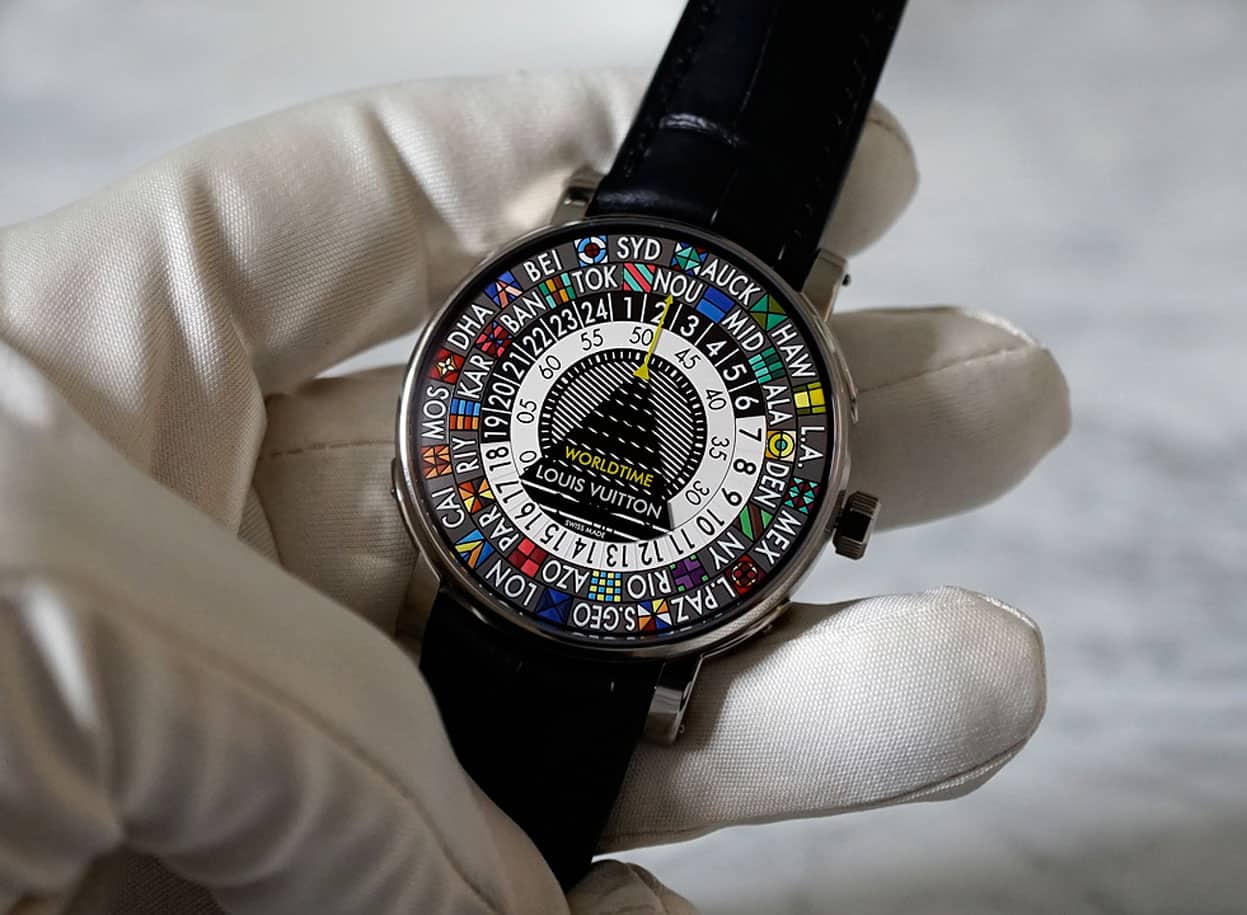 At BaselWorld 2015, Louis Vuitton presented a just as stunning looking and easier to read version of their limited edition Worldtimer, listening to the, a bit confusing, name ‘Escale Time Zone’. This time the case was reduced from 41mm to 39mm and is not made in white gold anymore, but in stainless steel. For a travel watch, the steel makes sense and is in my opinion the far better option, besides the fact that it costs (much) less, it is also lighter to wear. Both watches share the same style case, with the beautiful lug construction, that reminds so much of the Louis Vuitton trunks. 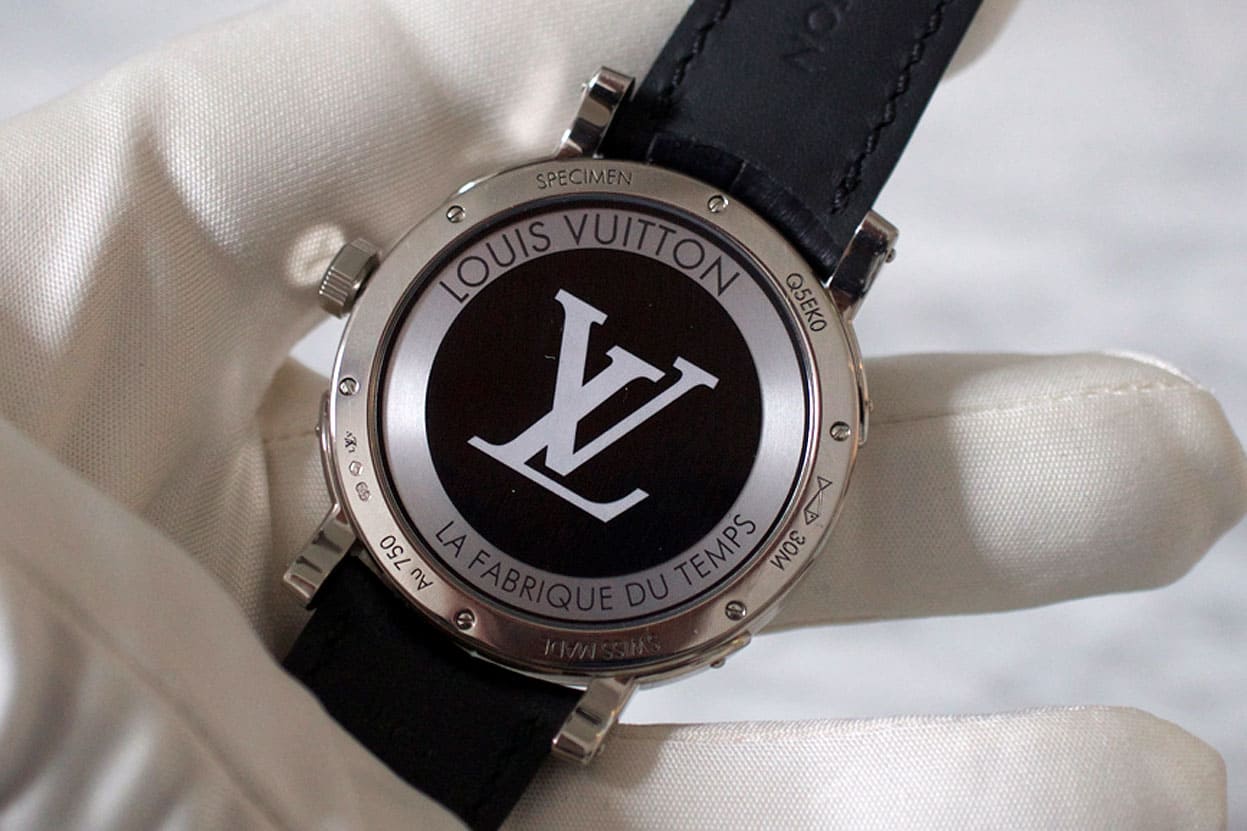 The attractive dial of the two models is what gets the most attention; it certainly is something that I had not seen before. The dial of the new ‘Escale Time Zone’ looks at first almost identical to the one of its high-end brother, just a bit less vibrant, but Louis Vuitton did an amazing job with their automatic printing technique, that finishes the dial in a fraction of the time that is needed for the painted dial of the Escale Worldtime, which is completely done by hand and takes up to 6 full working days, to finish. The reading is a bit simplified, since the Escale Time Zone has two hands. Powered by a trusty ETA-2892 based caliber, the ‘Escale Time Zone’ is of course not in the same league as the ‘Escale Worldtime’ that has the, by ‘Manufacture du Temps’ [Louis Vuitton’s own Manufacture] developed automatic Caliber LV106. 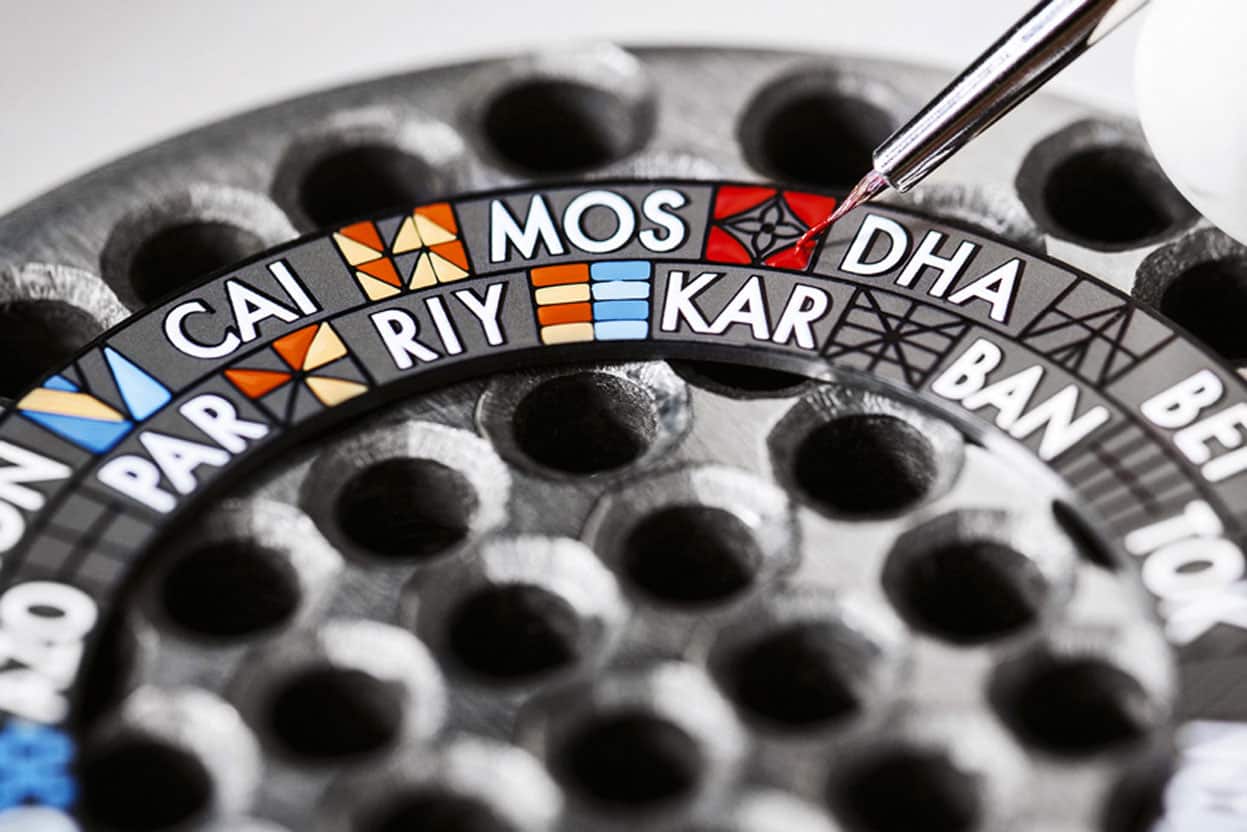 Louis Vuitton delivered again an amazing looking travel watch, now with just a little less functionality than its predecessor, a watch that many guys, including myself, would love to wear. Very affordable and as important, very Louis Vuitton!

But I ask myself how elegant Louis Vuitton’s marketing is in this case, towards their high-end customers, who just paid a huge amount for their limited edition ‘Escale Worldtime’ only to find out that there is a much(!) cheaper version out there with basically the same appearance. 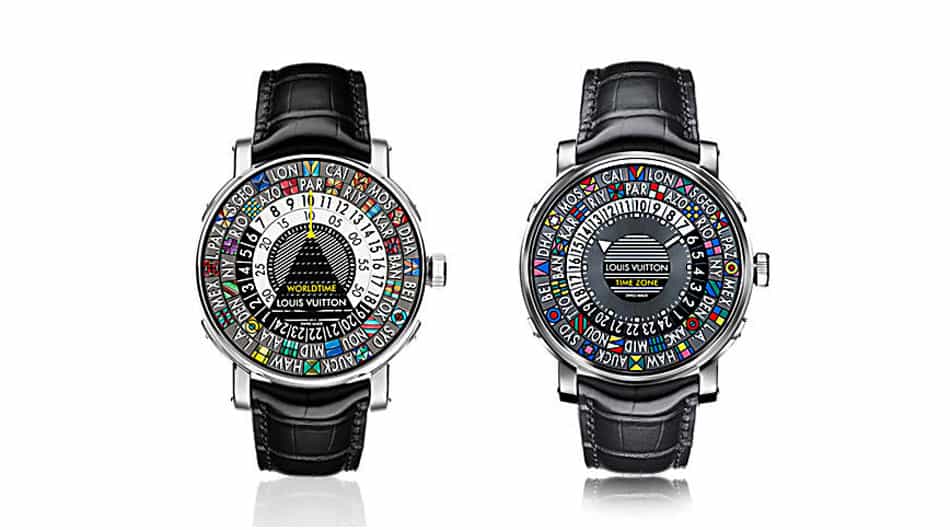 Let ‘s be honest, with this type of watches, it is all about exclusivity and I would personally not like to see the face of the lawyer who just paid over €50K Euro for his ‘Escale Worldtime’ watch, when his associate shows up in the board meeting, wearing the almost identical €5K Euro version.

Louis Vuitton’s approach is for sure another way of doing marketing for ‘Haute Horlogerie’ watches, but I seriously wonder if this will amuse the buyers of watches from the Louis Vuitton’s ‘La Fabrique du Temps’ collection. When buying an ‘Haute Horlogerie’ timepiece, one also trusts that the brand will keep these watches exclusive, and although the ‘Escale Worldtime’ is more refined with its enamel dial and different movement, these details are hardly enough to set the watch apart from its far more affordable peer.

Article written by George Cramer for Fratello Watches. George is expert on Cartier and and has a huge interest in independent watchmaking. He writes for several publications, including Revolution Magazine, Revo-Online and other media. Click here for his portfolio.