When we started the competition, we had 96 watches; now, we’re down to four. The remaining writers are now into their second head-to-head match-up. The winner moves on to the final; the loser goes home. At this point, it’s simply the best of the best. Your favorite four watches battle it out for eternal glory. Who will be crowned the winner of March Mania? It’s up to you to help decide who will be the King!

We’re at the sharp end now. We have four heavyweights left in our March Mania competition. The semi-final stage starts now! All four of our contestants can see the finish line where eternal glory awaits. Tomas and Bert clash in the second of our semi-finals. It’s Lange on Lange. Blood on blood. A heavyweight matchup if ever we’ve seen one before. Whichever one of these watches wins this round will be the presumptive favorite against either the Czapek or the Omega over in SF1. It’s just gotten serious. Everything is suddenly in play…

If you didn’t back this horse in the last round, it’s time to double up on this prize racer. The Datograph Lumen is the better watch, day or night. It’ll no doubt face some stiff competition in the final, but this sibling spat masquerading as a fair fight is anything but troublesome for this mighty mechanical meisterwerk.

Look, the Zeitwerk Date is good. How could I retain a single shred of credibility if I didn’t at least doff my cap to its brilliance? The thing is, though, all watches from A. Lange & Söhne are good. In fact, the worst Lange is a hell of a lot better than the best fill-in-the-blank. And so we have a real clash of the Titans here. And how I expect you to separate them from one another? By focusing on where they stand within their own families, of course!

The Zeitwerk Date is a brilliant idea. It’s really nicely executed too. But that doesn’t mean it’s the best or most desirable Zeitwerk model. It isn’t. In my stingingly direct opinion, that is the sumptuous honey gold model. Next to that, the Zeitwerk Date looks like a stand-offish, gangly teenager that hasn’t grown into its face yet. The Datograph Lumen, however, is the best watch in Lange’s catalog made better by the clear influence of intergalactic travelers, which must have crash-landed in Glashütte and snuck into the workshop while everyone else was sleeping.

It is mind-boggling. It is the best in every way. I’d happily listen to arguments for it being the best watch ever. Honestly, that wouldn’t be too much of a stretch for this piece. If you don’t believe me, look at the voting bar below. I’m confident it will show that you all agree with me. Send this model to the final, and let the chips fall where they may. 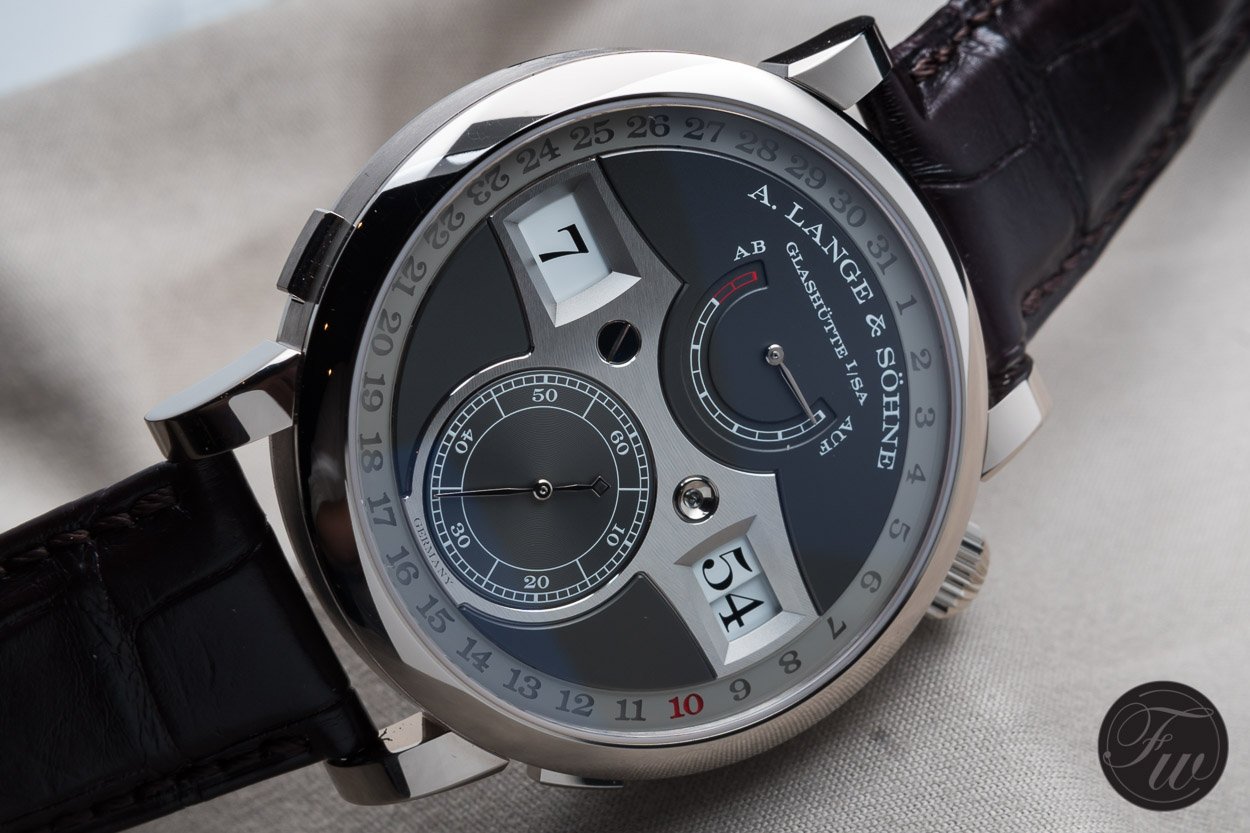 Calling the Zeitwerk Date a stand-offish, gangly teenager sounds like you are either trying to hurt it (your own family) or me (kind of your family too). And did you really said it hasn’t grown into its face yet?  Oh, man, you just asked for it! Just look at your watch which seems to be growing OUT of its face. If it was a beautiful black Datograph Up/Down facing me today, I would use this premium media space to congratulate you in advance. But a semi-transparent dial? When I hear “semi”, I see indecisiveness to make it either/or. The semi-transparent dial is not an upgrade; it’s a downgrade for me. It’s like adding another made-up subscription pack just to show an indecisive customer the real deal. The Datograph without a semi or Lumen is the real deal.

Speaking of the Lumen. I have a lot of admiration for the original classy Datograph, but this luminous coating is completely off for me. Even on the clearest pictures, I can’t unsee that greenish coating. Just because it’s an A. Lange doesn’t mean I can’t see the king naked. I get the idea of better legibility, but, next time, let’s not make the beautiful argenté sub-registers look like my face after I ate poisoned food. If you really need to see your dial glowing at night, get a Timex with Indiglo. Or buy a battery and light up the one and only OG Datograph. 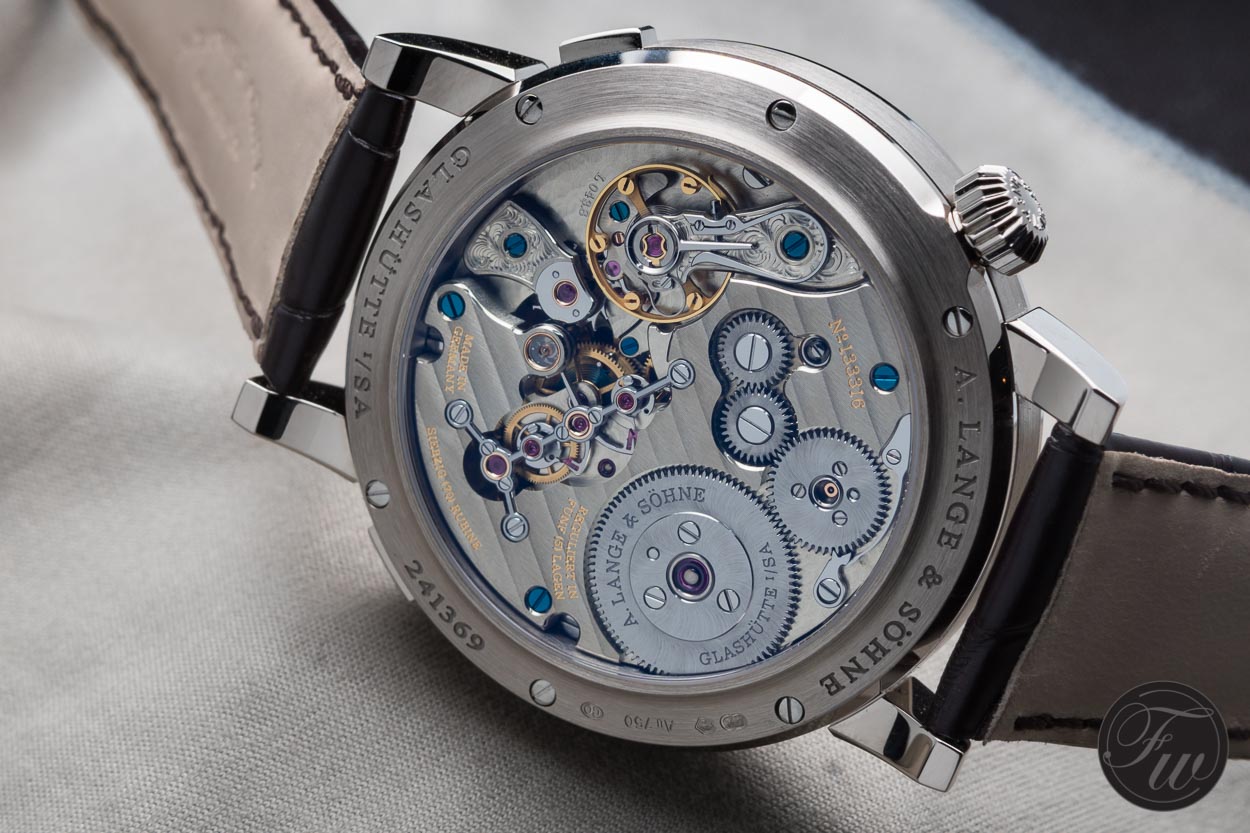 Let’s get back to A. Lange Zeitwerk and why you should make it fly into the finals. First of all, I am not even trying to make the case that the Zeitwerk is more complex or that its movement is more beautiful. Just don’t forget, that we are not looking for the classiest gentleman on the block. Two sub-registers and a big date — that’s fine for GPHG, but not for March Mania, in my humble opinion.  The Zeitwerk Date is the opposite of traditional. It is the cyborg child of a post-apocalyptic tech mania that came to challenge years of design stereotypes. And, I believe, it will be your champion when all is said and done.