Let me start by telling you this is a crazy watch, in a very positive way. Maximilian Büsser and friends (in this case Alain Silberstein, Kari Voutilainen and Eric Giroud amongst others) introduced this Legacy Machine version ‘LM1 Silberstein’ today.

Knowing MB&F a bit, the internet will be flooded with this novelty today. And that is justified, as the combination of MB&F and Alain Silberstein makes my horological heart tick faster. You read that correctly, I am not only into (relatively) affordable watches or chronographs from a specific brands, I love these awesome MB&F timepieces very much so as well. It is also hard not to love these watches, as they are the result of so much creativity every single time.

If you are relatively new to watches, you might not know who Alain Silberstein (1950) is exactly. Before he started his own watch brand in 1990, he was an interior designer in France. He fell in love with watchmaking and started his own watch brand – using his own name – in 1990 and did so until 2012. When I became interested in mechanical watches in the 1990’s, I came across some of his pieces once in a while and one of our editors actually has a beautiful Alain Silberstein watch in titanium bronze PVD. 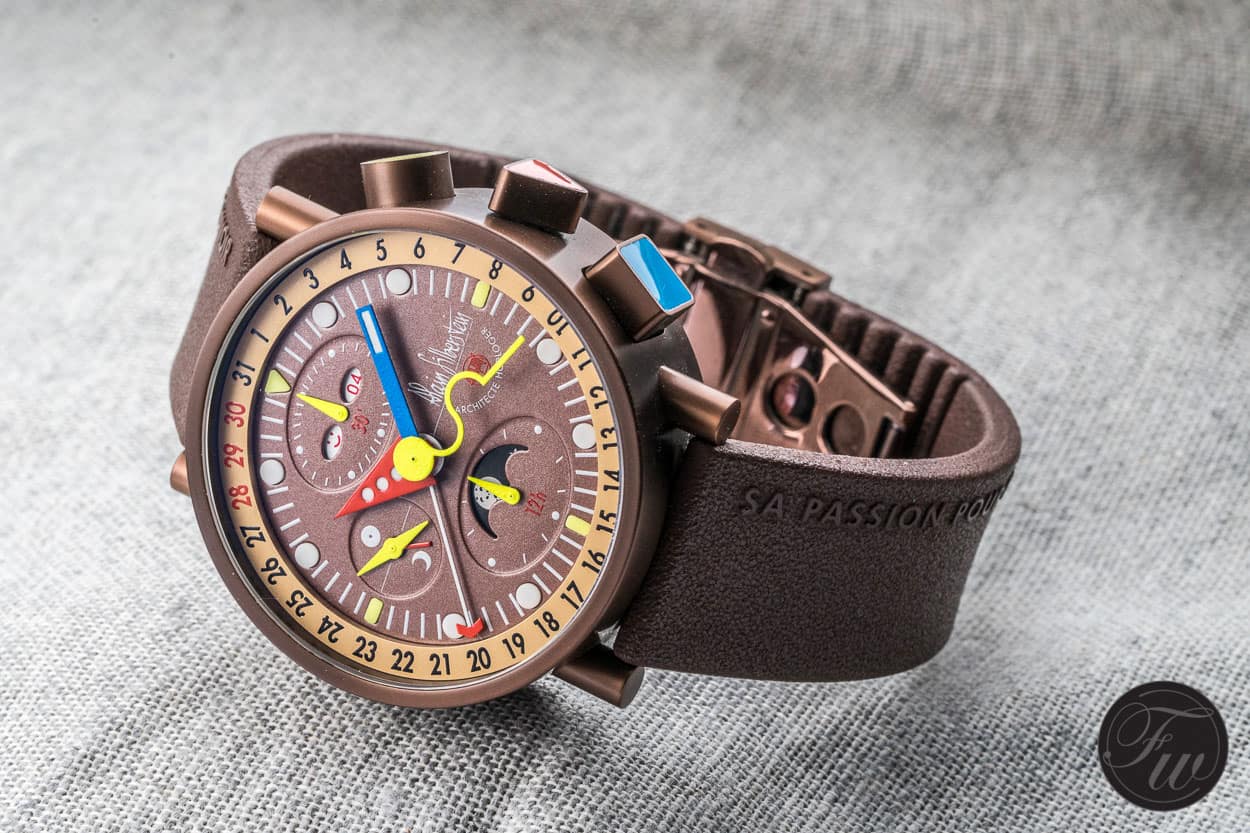 Besides exotic materials, Alain Silberstein was also known to use primary colors (red, blue and yellow) in his watches. The pushers on his watches reminded me of the buttons on the Sony Playstation controllers. It was around Summer 2001 that I actually run into the Alain Silberstein boutique in Paris, where the boutique manager showed me some amazing watches, some even had a case that were concealed by alligator leather. But that was then, and today we have for you the LM1 Silberstein timepiece by MB&F.

In 2009, Alain Silberstein already had a cooperation with MB&F with their HM2.2 Black Box Performance Art timepiece. If you take a close look at the dial on the right, you will see the ‘Playstation’ buttons I was referring to earlier, in blue, red and yellow. 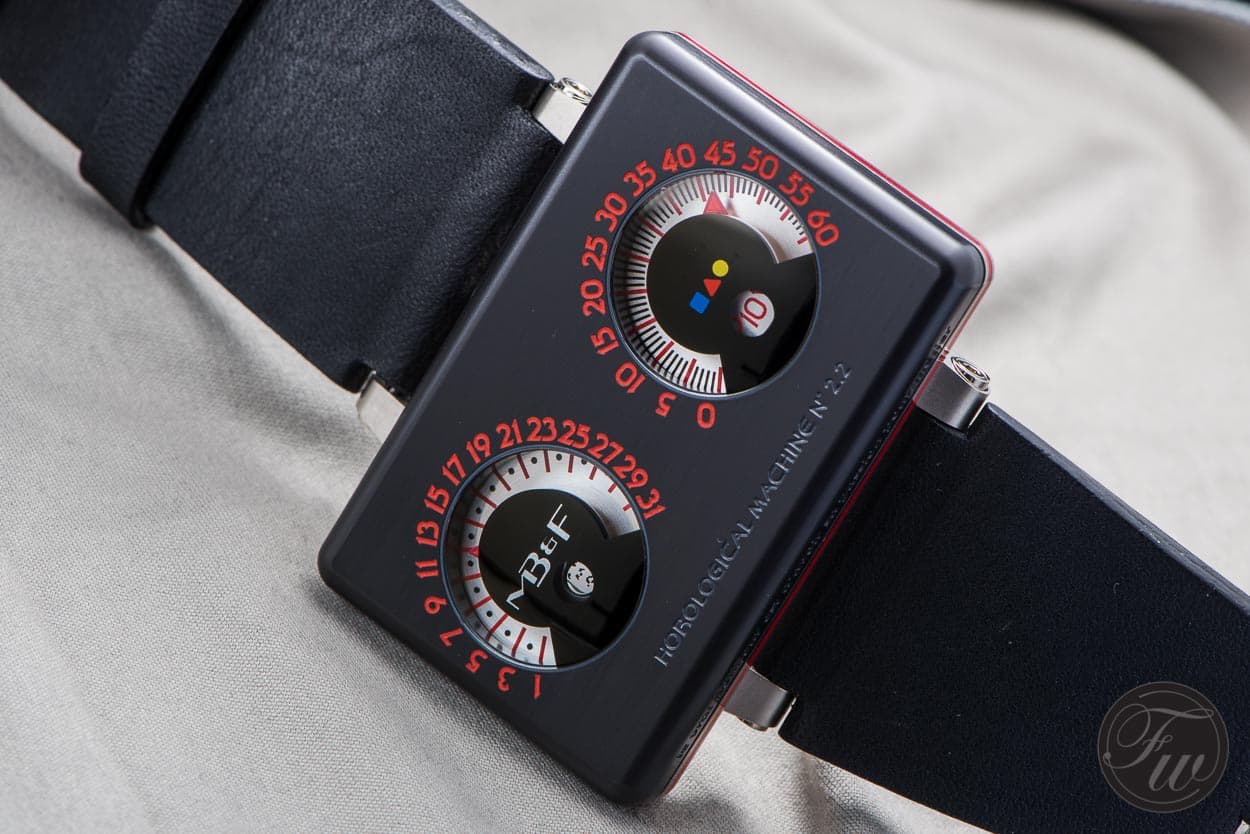 The LM1 stands for the Legacy Machine No1 which was the first MB&F timepiece that was just…. round! Before, like the above pictured HM2.2 and their other HM versions (1 – 6 and X) had all sorts of shapes, except round. According to Maximilian Büsser, the idea of the Legacy Machine collection was to pay homage to the rich watchmaking traditions of the 18th and 19th centuries by answering the question: What would MB&F have imagined a 100 years ago? We did articles on the Legacy Machine here and here in the past. 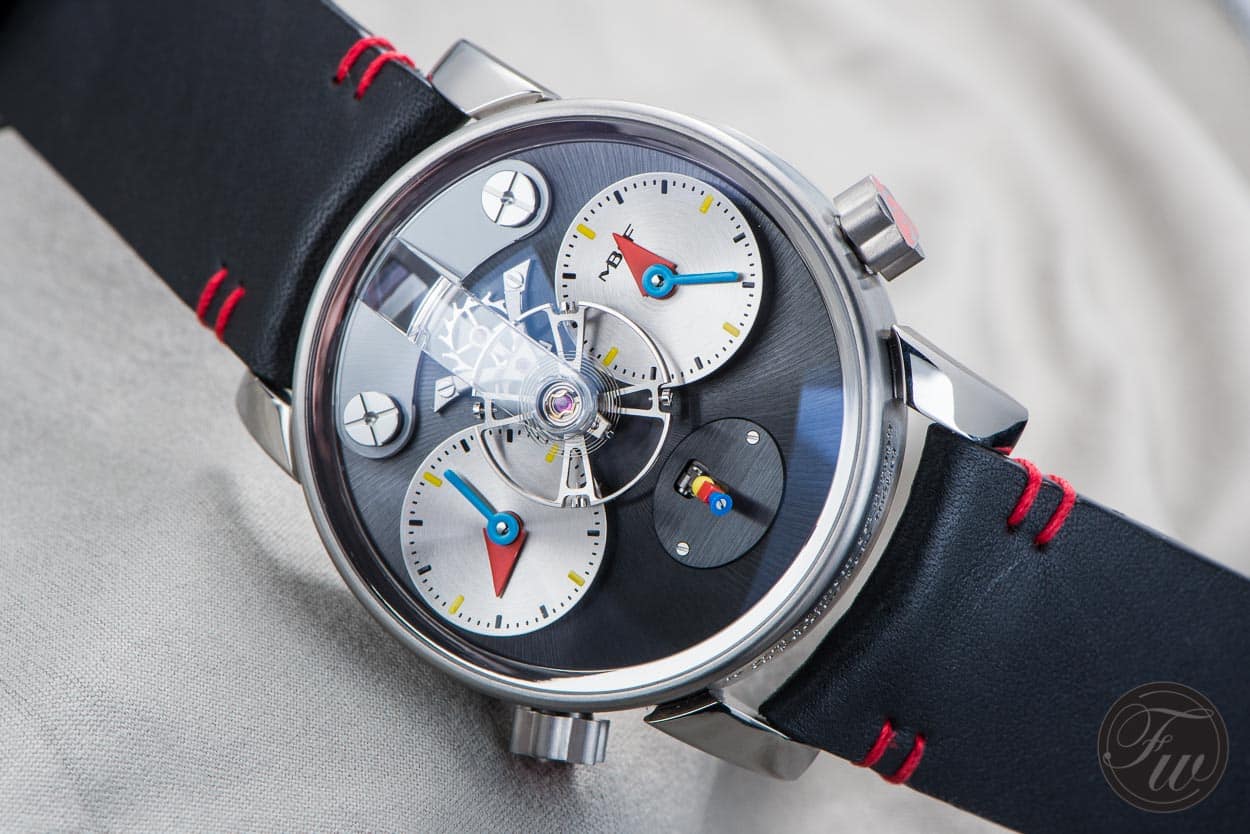 For this LM1, which is a watch that features a dual time zone and a vertical power reserve indicator, Alain Silberstein heavily influenced the appearance of the LM1 watch, hence LM1 Silberstein. The primary colors that occur on the LM1 Silberstein are one thing, but also have a closer look at the bridge of the balance wheel.

The bridge of the LM1 Silberstein is made of sapphire. This way, it doesn’t obstruct the view on the ‘heart’ of the watch, the balance wheel.

As Silberstein always did, high lighting the most essential parts for reading time in the primary colors red, blue and yellow. He also used the three simple geometric shapes (triangle, square and circle), even in 3D (look at the vertical power reserve indicator for example). 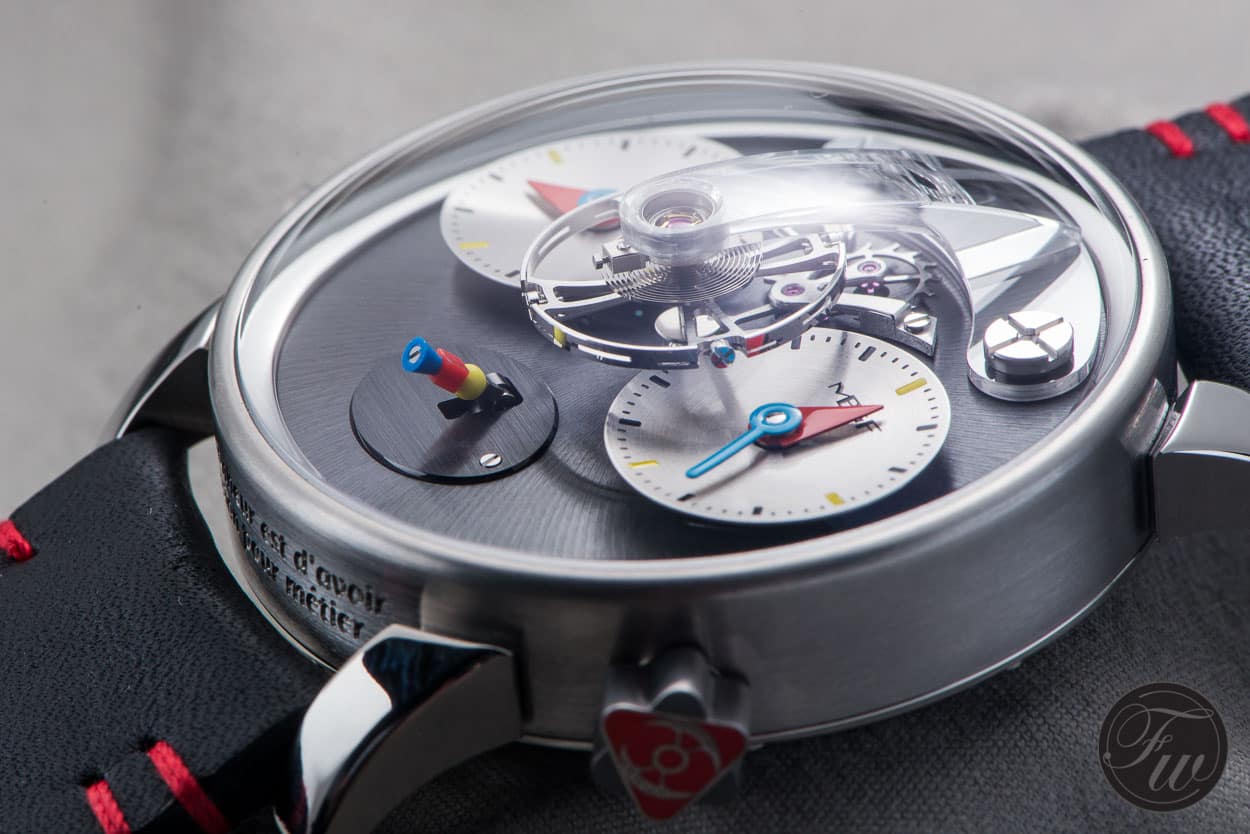 All watches share the same case and movement of course. The diameter of the case is 42,5mm x 17mm and – except for the height – that is a pretty common size for a watch these days. As I wrote earlier – and at the time of the introduction of the Legacy Machine – is that these LM models are very wearable compared to MB&F’s Horological Machine collection. As you can see below, it is like a real watch ; – ) 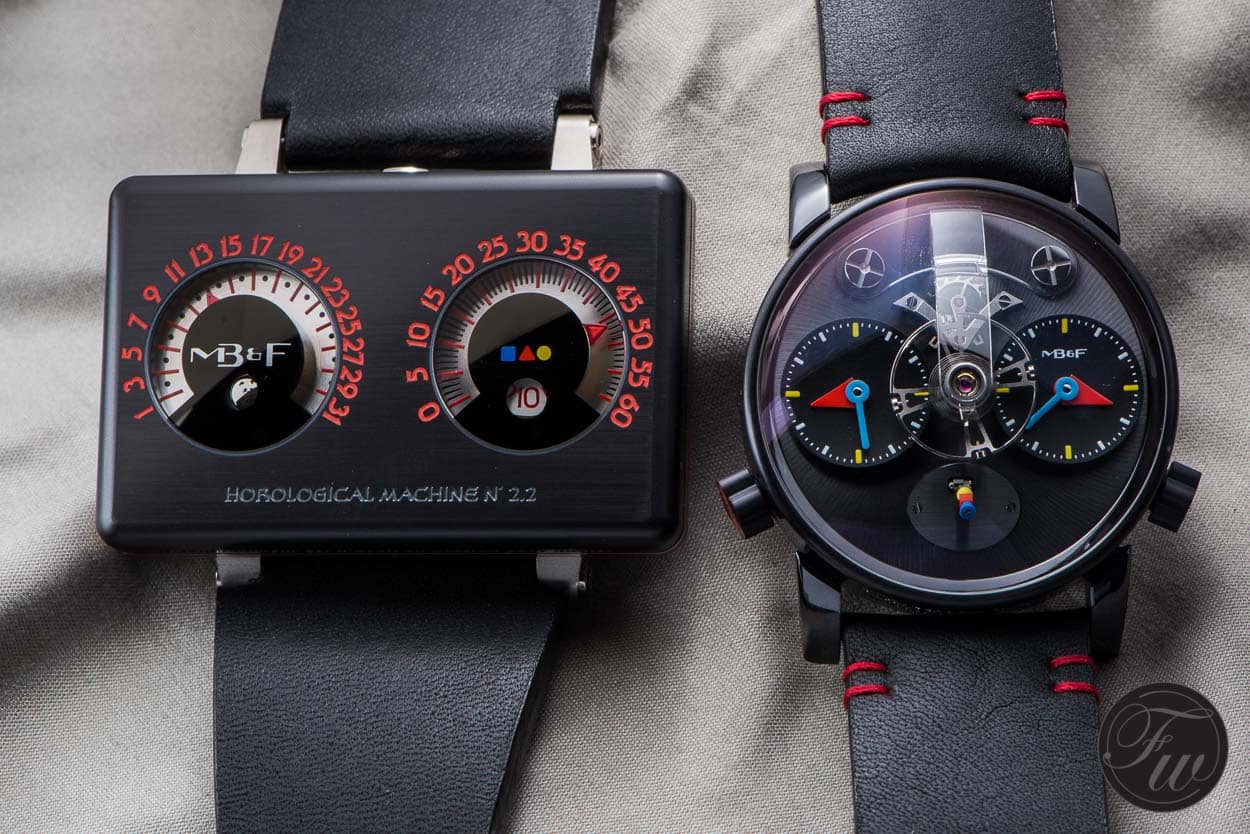 I had a thorough look at all three versions and wondered which one resembled the original Alain Silberstein watches best. I don’t have the answer other than all three to be honest, but perhaps the black version (like pictured above together with the 2009 HM2.2 Black Box) does it best for me. Also because the red, blue and yellow really stand out with this black PVD titanium case and black dial. 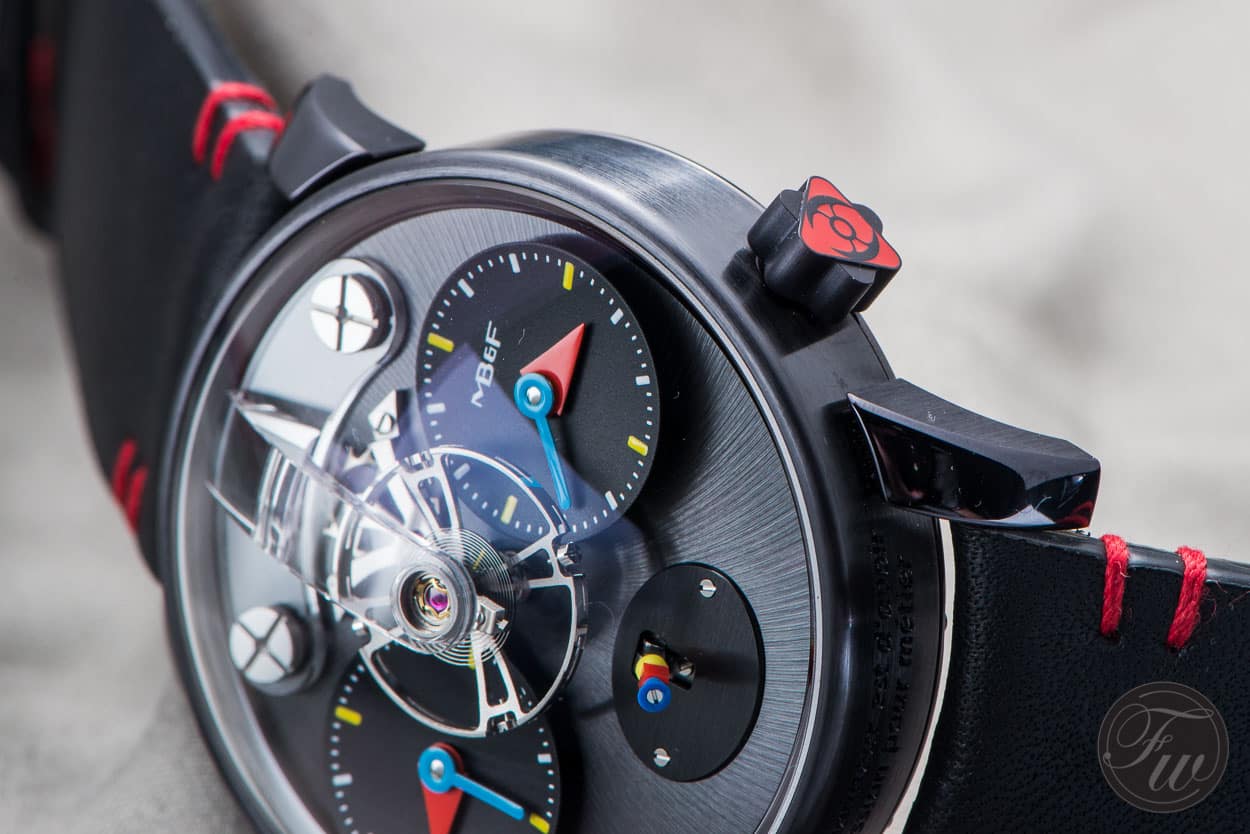 The 18 carat red gold version is the most expensive LM1 Silberstein of the collection, with a retail price of CHF88K Swiss Francs, excluding VAT. However, the structure in the dial of the red gold LM1 Silberstein is just breath taking. 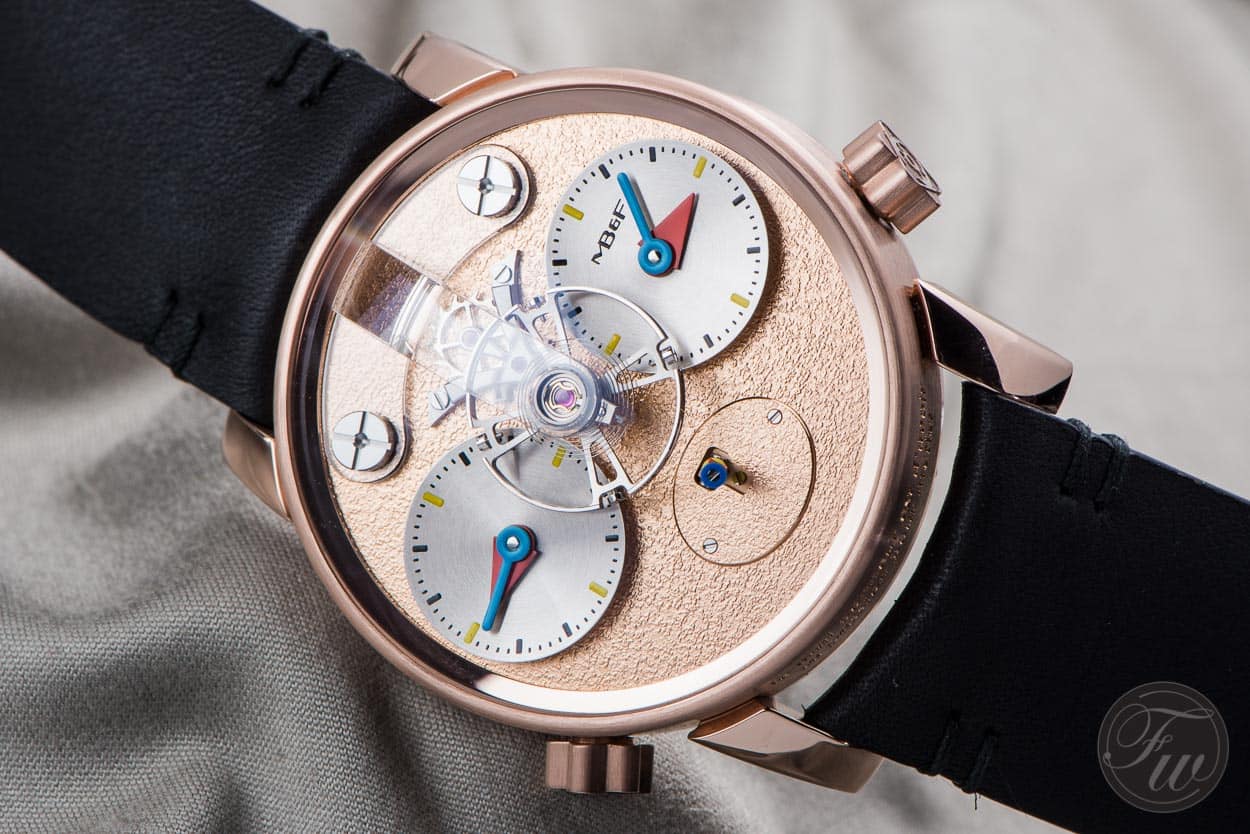 The LM1 movement is being referred to as a 3D movement, developed for MB&F by Chronode and created by Jean-François Mojon and Kari Voutilainen. It is a beautiful movement with 19th century style (hand) finishing, hand-made engravings, Geneva waves and polished bevels. This is where independent watchmakers in this segment make a difference compared to, let’s say, Patek Philippe or Audemars Piguet. It is all about the finish and for a huge part it is all done by hand, whereas the big brand manufactures accomplish a lot through machining and only a number of parts receive hand finishing/engraving. 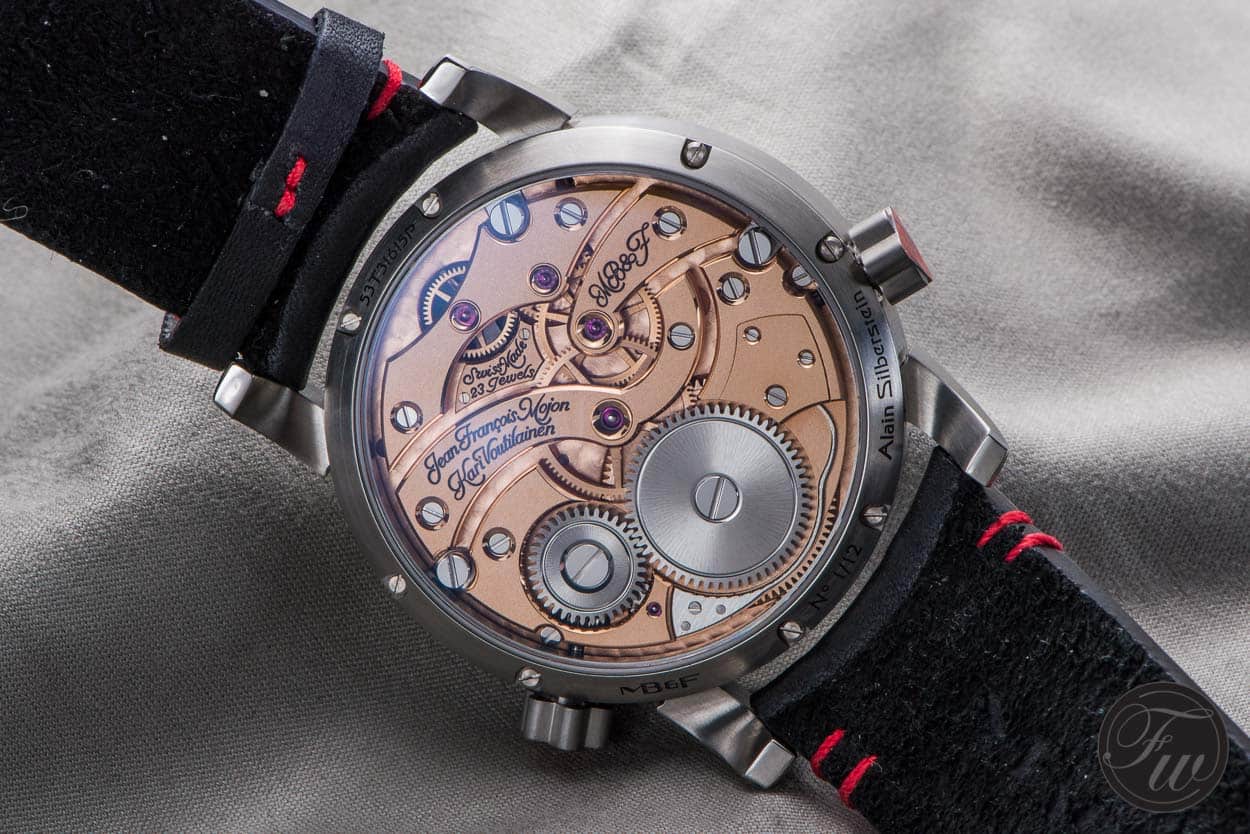 Furthermore, the balance wheel (on the dial side) is a whopping 14mm big and has four regulating screws. This movement has a frequency of 18,000vph, like many of the watches in the old days had. Today, most watches are 21,600vph or 28,800vph, and then there are the high beat movements (e.g. 36,000vph).

All three pieces are limited to 12 each. True fans and those who are lucky enough to be able to buy them, might do good to purchase all three of course.

Personally I love the watch but – although I don’t complain about my life’s standards – it is not going to happen any time soon, but that black version does it for me (while I am normally not that fond of wearing black watches myself). For now, I find myself looking at pre-owned Alain Silberstein watches on Chrono24 and other sites, as those are more close to my budget. However, it is due to this MB&F LM1 Silberstein that my interest in them sparked again.

More (or all) information regarding the new MB&F LM1 Silberstein can be found here. A gallery of images that our photographer Bert took, can be found in the gallery below.