Today is German Unification Day, so let’s take a look at something from the Fatherland – the Sinn T2!  Enjoy!

In 2013, I attended my first Baselworld with my wife-to-be as a public spectator and the watch that stole my heart that year was, surprisingly, the newly introduced Sinn T2. As one who had been living in Germany on and off for a little over a year at that time, I developed a strong regard for the brand from Frankfurt am Main. Plucky, full of innovation and generally quite cost aware; Sinn is a popular brand amongst enthusiasts who are looking for something unique and extremely functional. Today, if for no other reason than to shed some light on a rarely discussed model from the brand, we’ll take a look at the T2 roughly three years after I first received it. 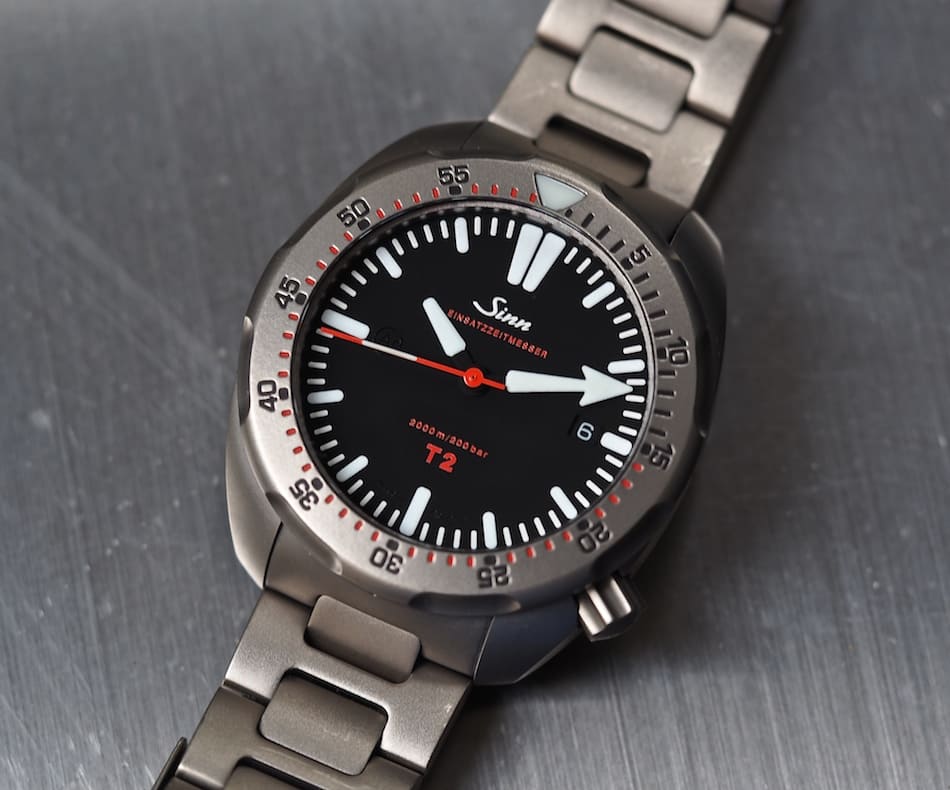 The Sinn T2 is the brand’s quiet diver…

I mentioned that the Sinn T2 doesn’t get a ton of press and there are probably several reasons for that. The watch is expensive. Equipped like you see here, it retails for 2,645 Euros in Germany (this is up moderately from the initial list price of 2,440 in 2013). It also comes in at 41mm in diameter, a size that should be reasonable for 99% of humanity, but some deem that as small today. Instead, they can opt for the similar, but far less stylistically composed in my opinion, 45mm T1. Finally, there’s the elephant in the room created by none other than Sinn itself known as the U1. The U1 is the diving legend that put the brand on the map and, making life difficult for the T2, sizes at 44mm and prices at almost 1,000 Euros less (1,730 Euros on bracelet to be exact). But let’s give the T2 its due because there’s a bit more going on here than one might imagine. 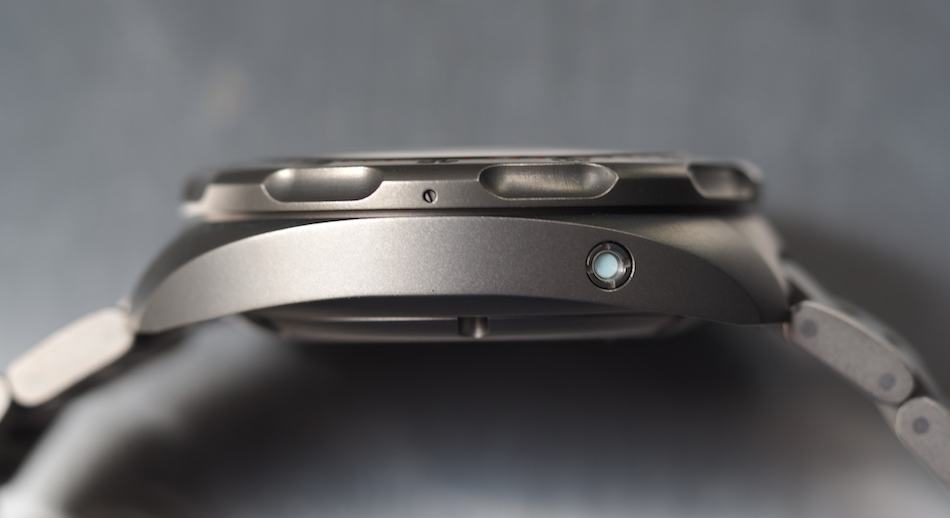 The followup to the Ocean 2000

Some companies reissue watches and others blatantly copy their competition. The Sinn T2, however, does neither, but it is a theoretical extension of a once proud lineup of watches from another brand: IWC. It seemed to go unnoticed by most, but it was said during its time of release that the T2/T1 series was meant to be a spiritual follower of both the iconic Porsche Design/IWC Ocean 2000. If you’re familiar with this watch, it’s a legend – especially the Ocean 2000 –and the owner of Sinn, Lothar Schmidt, also oversaw its design and production. 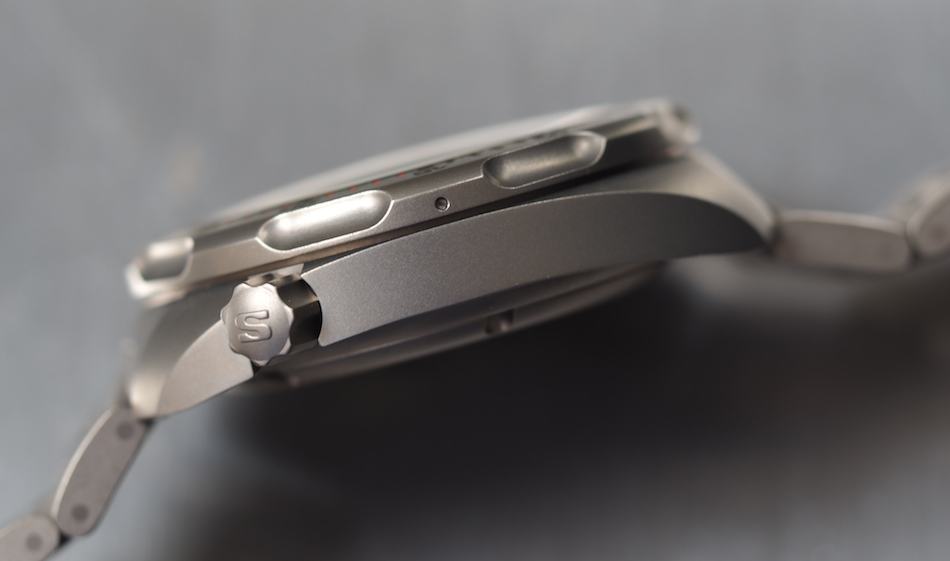 Seems far-fetched, doesn’t it? Well, take a closer look and you’ll see that both watches share titanium construction, a scalloped/ashtray styled bezel that must be pushed down while turning, and a crown at 4:00 to aid wrist comfort. The same design overall? No. But the Sinn T2 shows how certain design traits can be carried forward without aping a predecessor to the point of plagiarism. 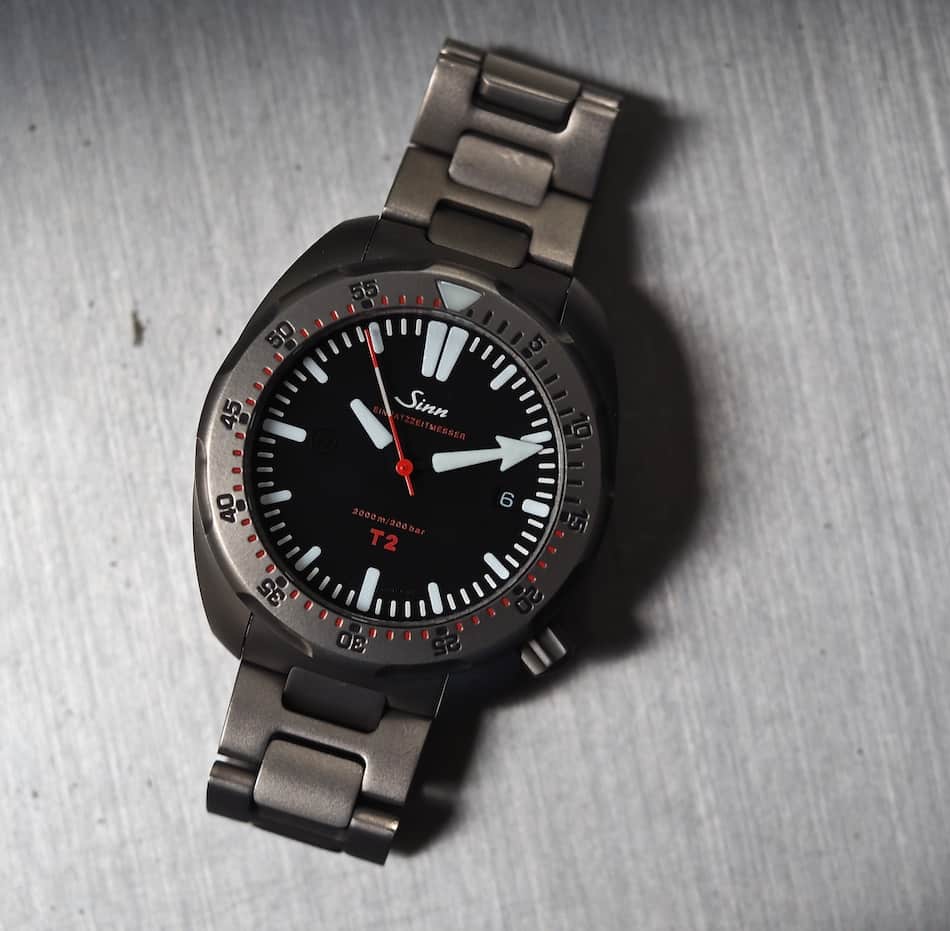 I didn’t really read about this historical link until well after I returned from Basel, so what was it that turned me on about the Sinn T2? It was the case shape. As much as I am not a c-case lover, there was and is just something about the shape of this watch that looks so smooth. Credit the hue of titanium perhaps, but it looks extremely comfortable and yet very, very capable. 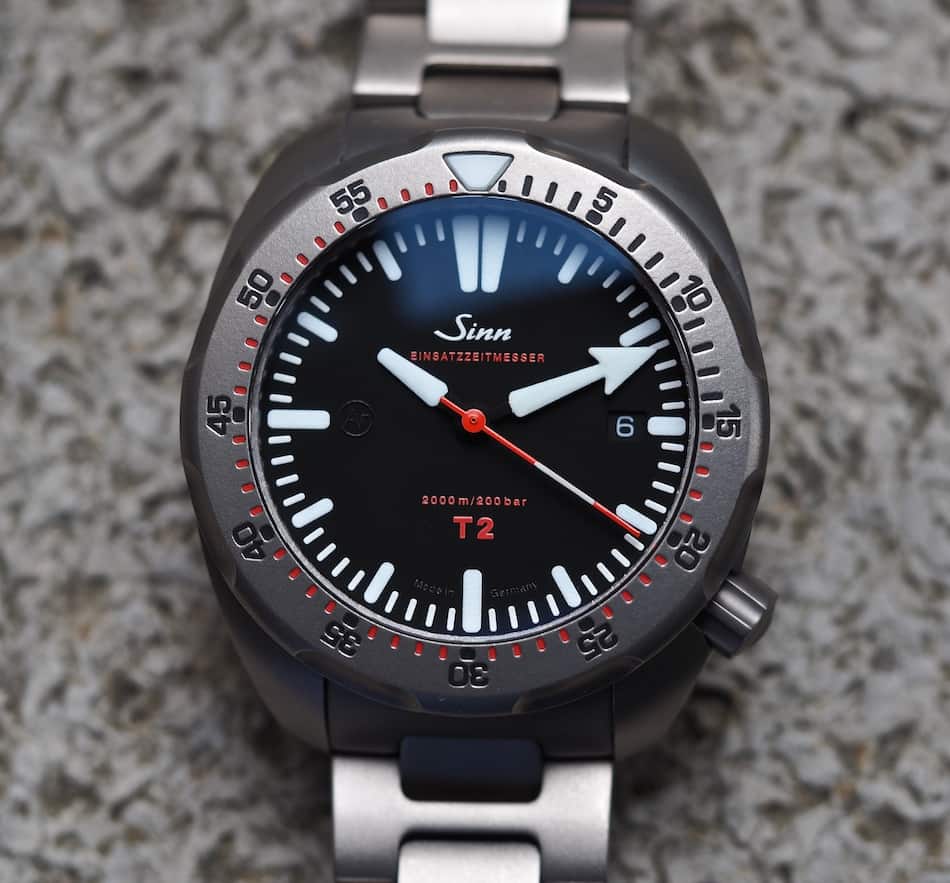 The T2 is seriously capable

Regarding capabilities, the Sinn T2 is a beast. It’s water resistant to 2,000 meters – that’s probably 1,995 meters deeper than my needs – and the titanium case, bezel and bracelet make it feel like nothing on the wrist. Regarding the bezel, it’s Tegimented and in Sinn-speak, that means hardened. The watch also features Sinn’s Ar-dehumidifying technology in the form of a small capsule that screws into the side of the case that turns blue in case of water encroachment. 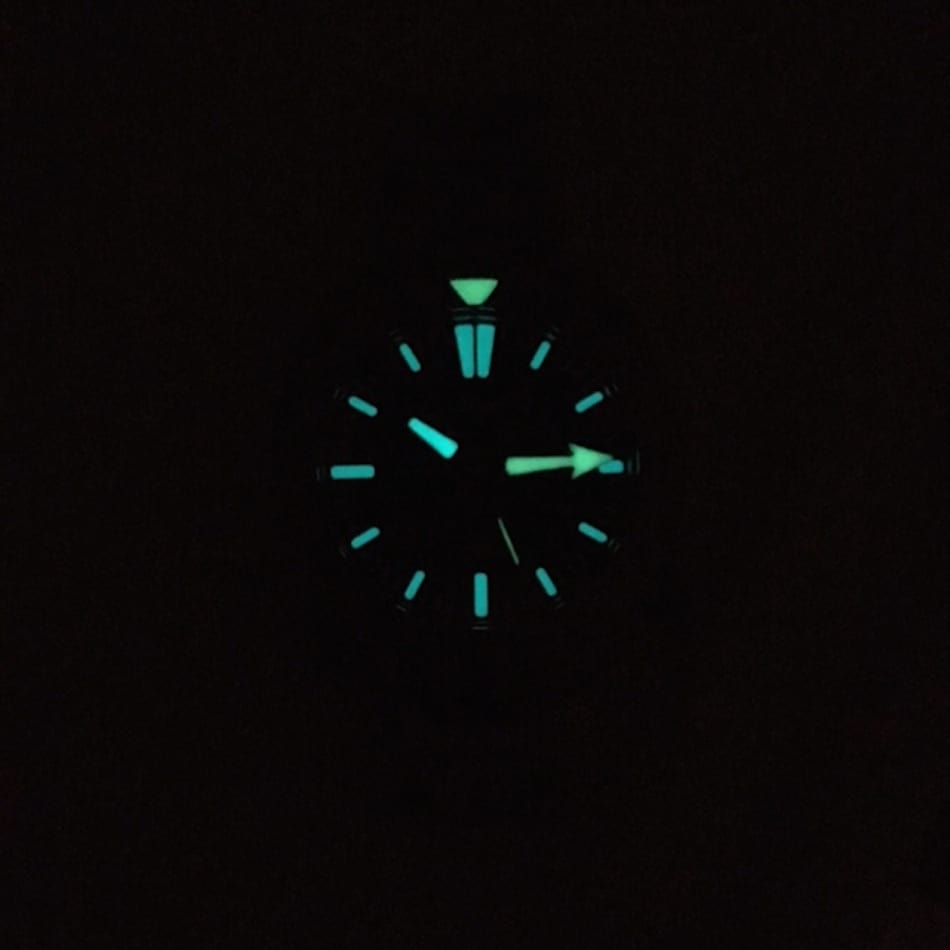 Some of the other features found on the Sinn T2 are two different colors of luminous material (hour and minutes hand differ to help quick time checking at night) that glow like a torch in the dark. It has an anti-reflective crystal and the crown and case back are naturally screw down. Inside beats the ETA clone, the Soprod A10-2, which kicks off at a relatively high rate of 28,800 bph. The watch hacks, is shock resistant and anti-magnetic. Post-apocalypse ready? You betcha… 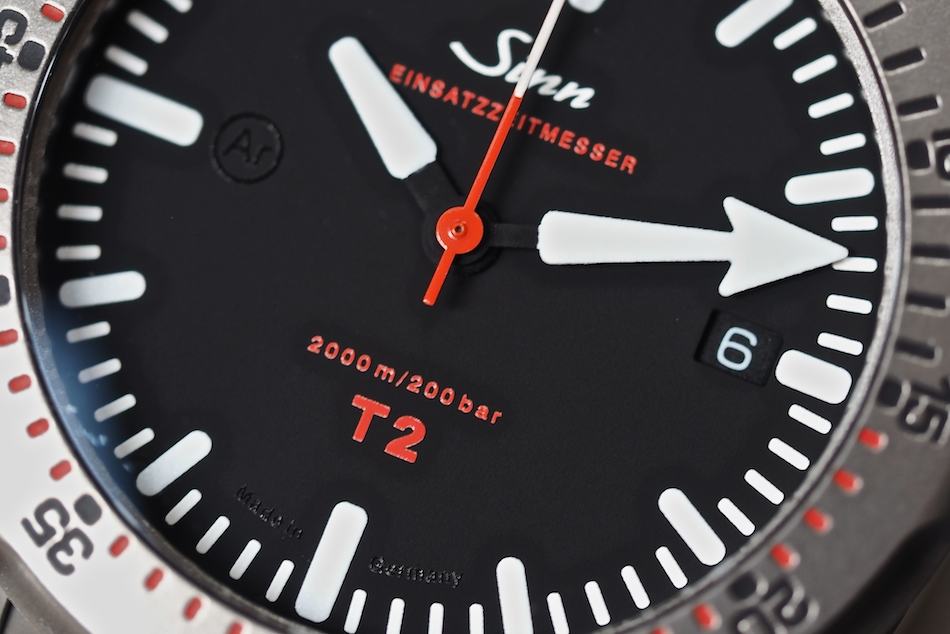 One of the most comfortable watches…

Several years on, though, what have been my experiences with the Sinn T2 and would I still recommend it? Well, some Sinn diehards expressed more than a little concern with the soft hour and minute hands. For me, that actually made me come in from the cold on Sinn watches. I found previous releases such as the U1 to be too technical and, dare I say, Teutonic for my liking. I was worried that with something like the U1 I’d become bored of the watch. So, for me, I enjoy the hands. Ditto for the “barber shop” pole sweep seconds hand. It adds just the right splash of color on a watch that only adds red on some of the font found on the matte black dial. I’m also a fan of the hour markets that even remind a little of another similarly shaped classic, the Seiko 6309. 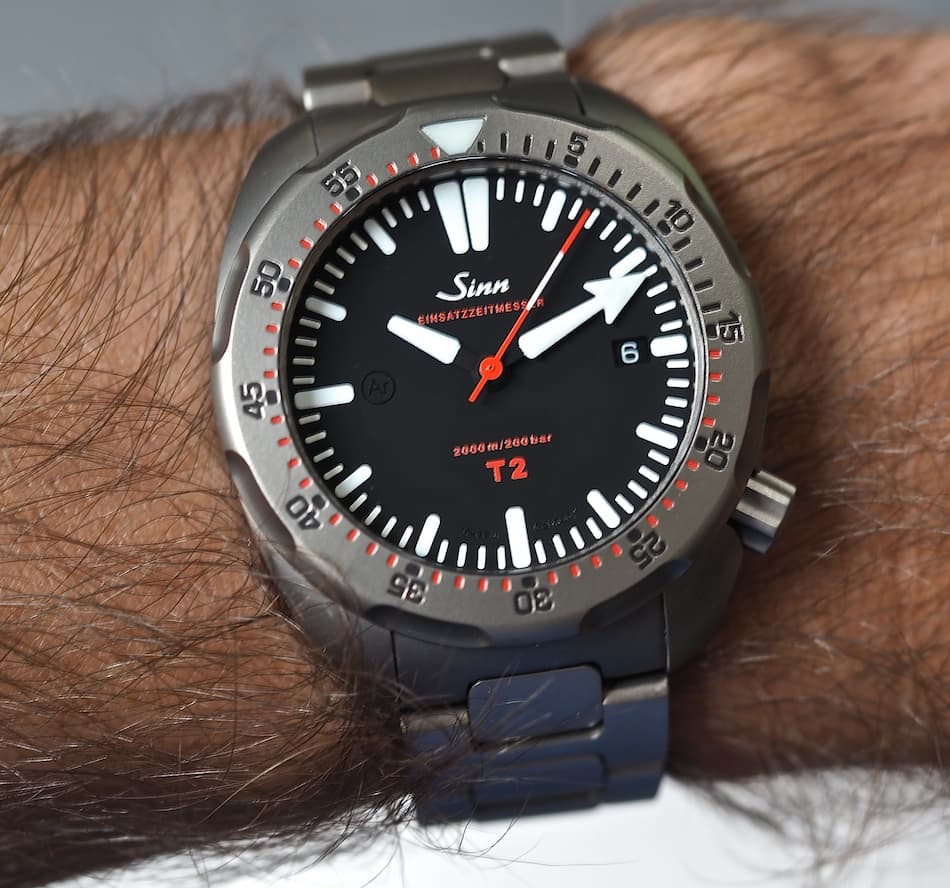 I hadn’t really experienced a titanium watch for a long period of time before receiving the Sinn T2. The watch is so light that it’s almost disconcerting. At times, it truly feels like there’s nothing on the wrist. This has made the T2 an amazing watch for hot, humid beach holidays where the metal stays cool and the lack of heft makes it overly comfortable.

The well made bracelet – love those hex screws to undo the links – is one of the most wearable on the market. For even more comfort, I’ve long thought about adding the expensive, but great Sinn silicone strap with deployant buckle. Oh, I’ve also thrown it on 20mm NATO straps (olive green looks awesome) and they look fantastic. 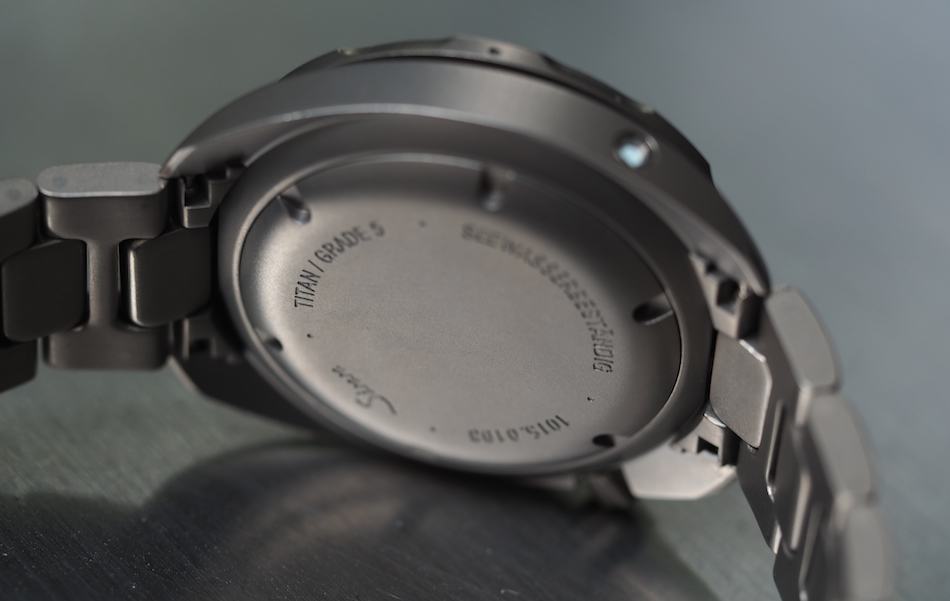 The other thing I like about the Sinn T2 is that it actually is suitable for most situations on its bracelet. Ok, I live in Germany, so wearing any Sinn anywhere is acceptable, but it’s classy and subdued enough not to look so garishly sporty. This also works on a vacation where one might think twice about the watch they wear to a place rife with pickpockets and other undesirables. Trust me, very few would ever mistake this watch for a Submariner. 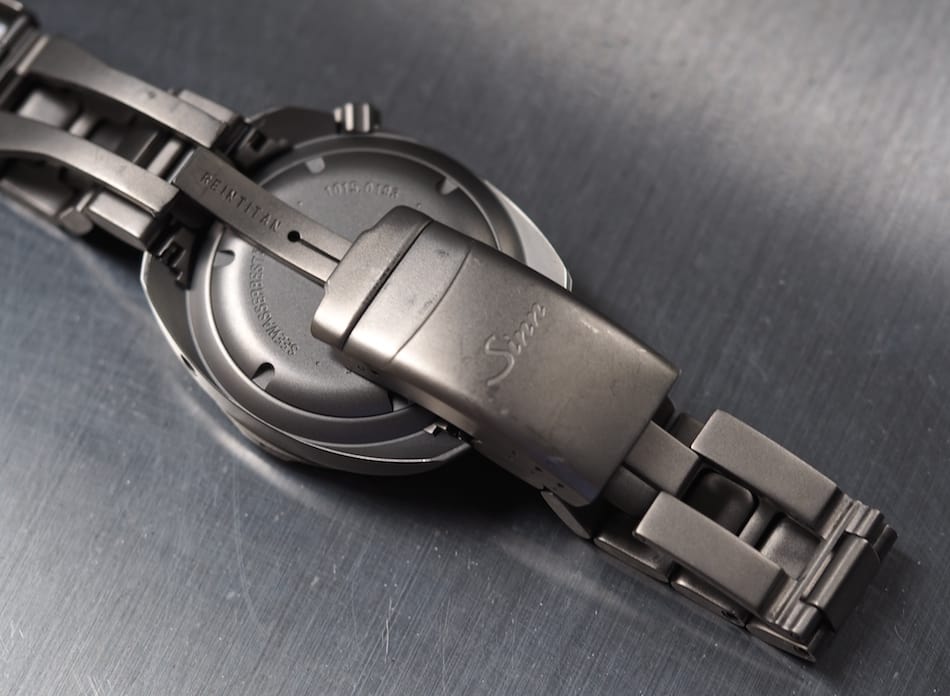 My beefs? Just a few. First, the wetsuit extension on the bracelet seems a bit too easy to deploy. This is probably easily fixed but for something I’ve never used, it’s a bit that it loosened so quickly. Also, I’ve always found the bezel just to be a bit off of the 12:00 mark – again, fixable. 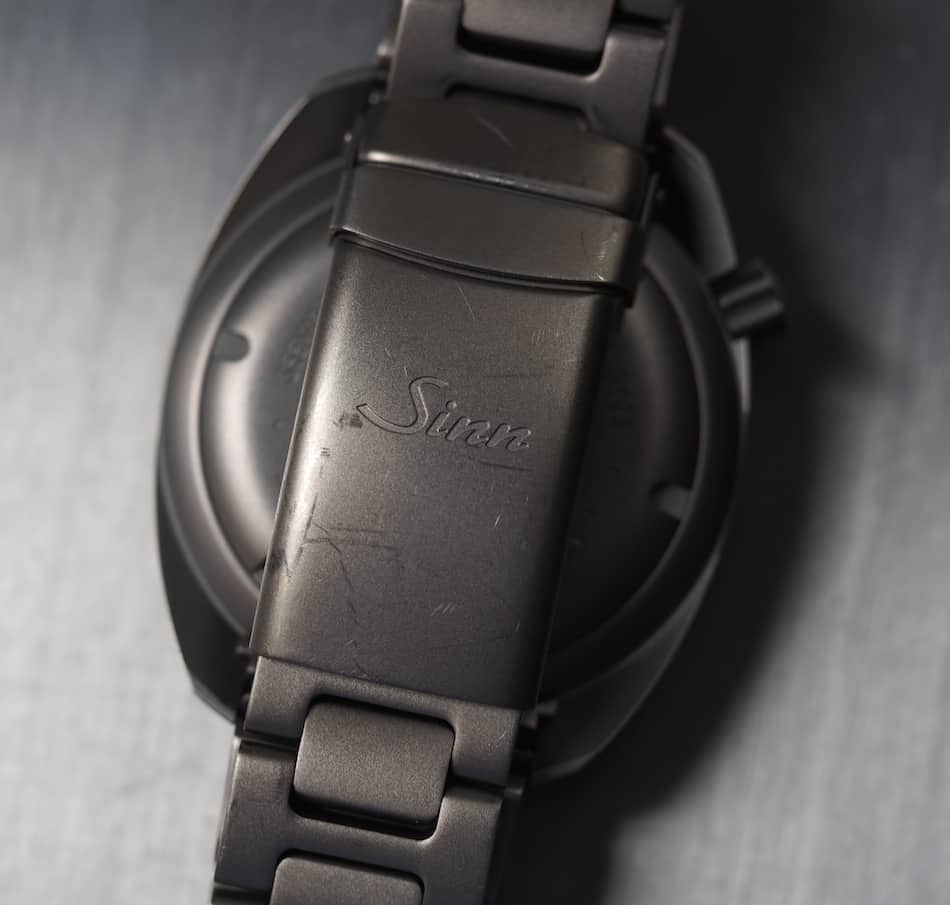 Finally, the clasp has scratched due to my decidedly above sea level lifestyle at a desk. I don’t really blame Sinn here, but it somehow looks more unsightly on titanium than on steel. 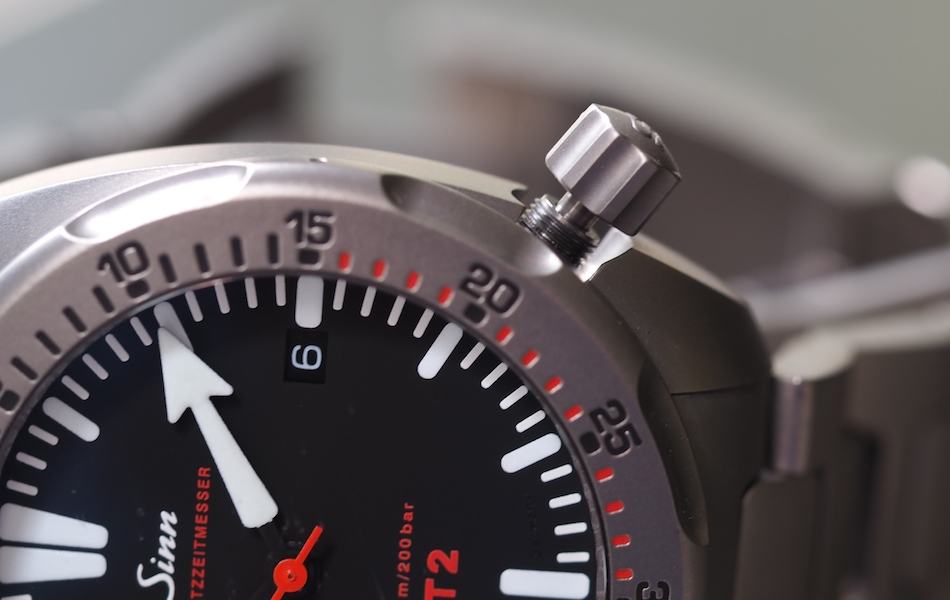 I wear the Sinn T2 every so often. I should wear it more, but I tend to go vintage most of the time now. Still, I really appreciate this watch and it’s a perfect candidate for someone who wants one watch that does everything – and who is looking for something unique. When I do choose to wear it, it’s because it’s become a go-to when I want something stupidly reliable, easy to use, rugged, and incognito. 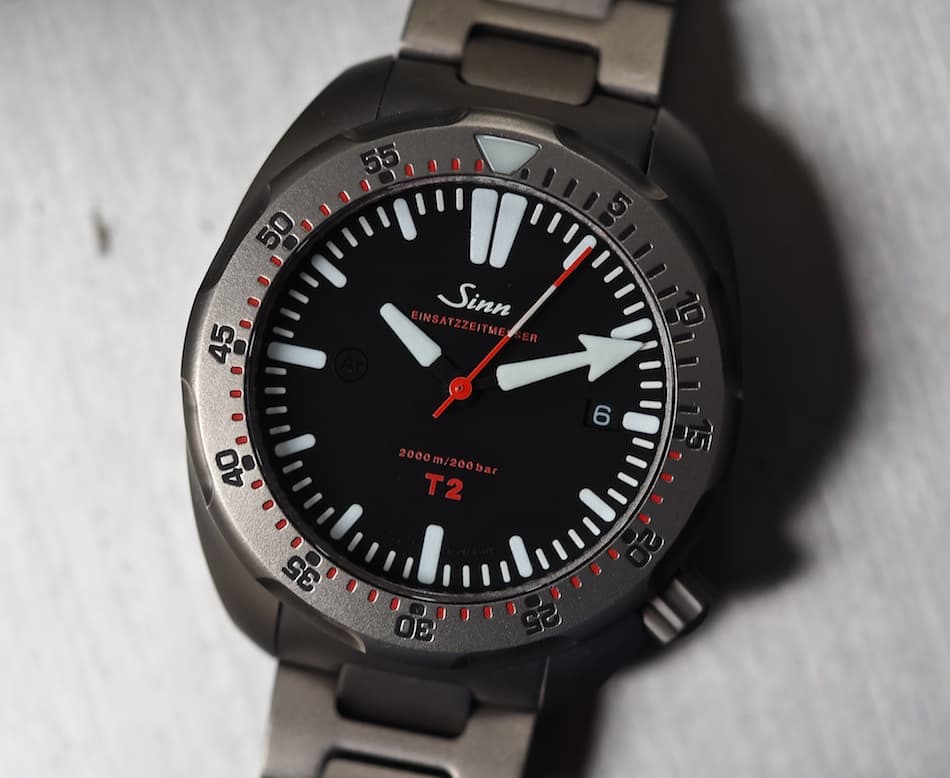 Expensive for a Sinn, but competitive

If we return to the subject of pricing on the Sinn T2, the biggest concern is likely Sinn itself. For a long time, Sinn had a reputation of making amazing watches that sold for equally astounding prices. Well, those prices have risen, but guess what? They’re still inexpensive compared to most brands that have also raised prices by far greater amounts within the last three years. Also, try and find another big brand diver that packs this much content (case material, water resistance, etc) into a watch that costs less than 3,000 Euros. Difficult isn’t it? You’d probably be left checking out the Tudor Pelagos and that’s a fine choice, but it is more expensive and more common. I actually really like the Pelagos, so it ultimately comes down to preference. 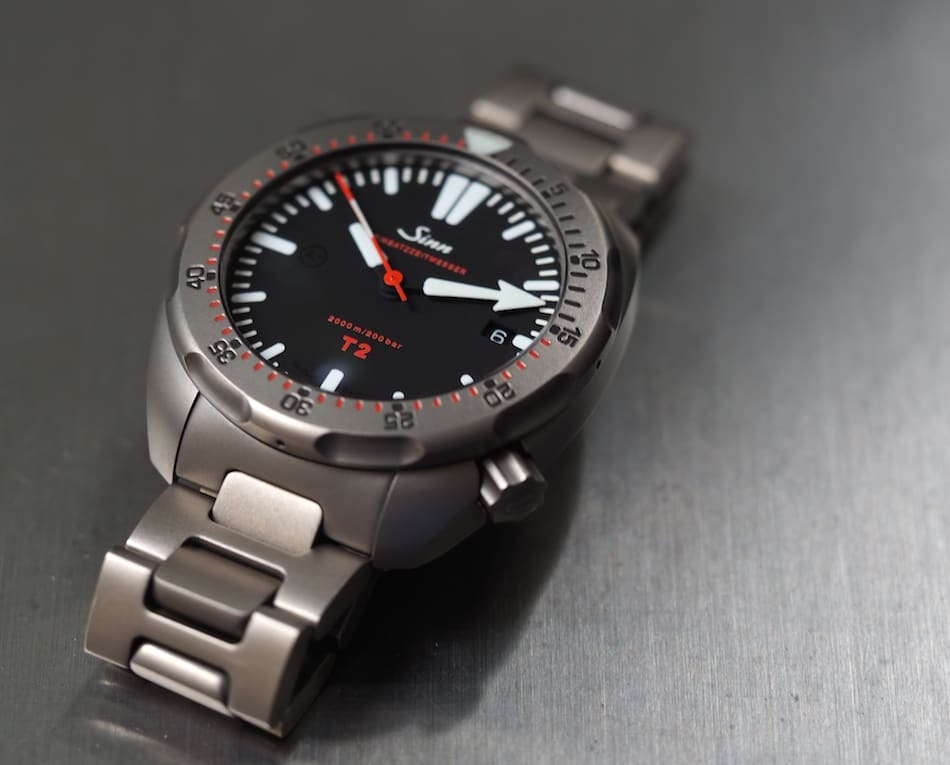 Would I buy the Sinn T2 today? Absolutely. It’s unique, ready for anything that comes its way, has a bit of a history and it looks great! Out of all the dive watches I do own, this one will be on my wrist when I decide to start taking dive lessons – yes, it’s coming. Oh, and for those of you who like a little blue in your life, Sinn did begin selling a blue-dialed T2 last year and that’s about the only thing that would now make my choice harder.

More information on the Sinn T2 can be found here.