It was quite something that Patek Philippe discontinued its iconic luxury sports watch in stainless steel, the Nautilus. Today, the brand introduces the Nautilus 5811/1G. It is a variation of the classic discontinued 5711/1A, now in white gold. But wait, there’s more. One millimeter, to be exact, for an increase in size from 40 to 41mm.

Even more important, however, is the new case construction, or better said, a return to the original concept behind the 1976 Nautilus 3700/1A. As you probably know, the case of that first Nautilus reference was a monobloc style, a two-piece (case and bezel) construction where the movement had to come out via the dial side. The case back was fixed and could not be taken off separately. With the introduction of the Nautilus reference 5711 in 2006 (till 2021), the case consisted of three parts. The porthole concept was gone, and like most other watches, the movement was installed via the back side of the watch. Other watches that had monobloc cases were, for example, the Royal Oak 15202 and the original Omega Seamaster PloProf 600M. 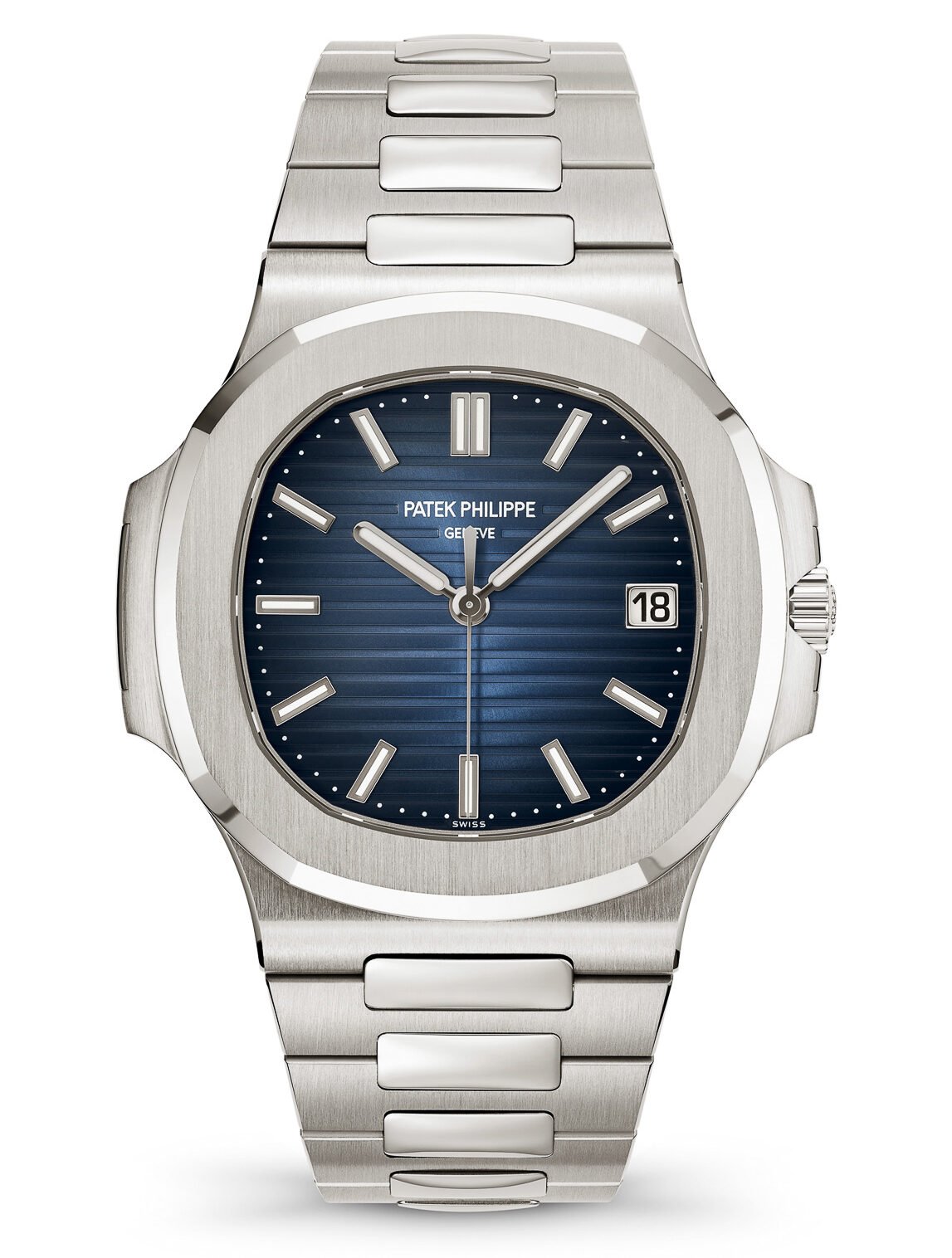 The porthole concept was an important aspect of Genta’s design, and for a long time, only the Audemars Piguet Royal Oak stayed true to it. Until today. A clever new system allowing the crown to be removed via the dial side replaces the split-stem system used on the original Nautilus 3700/1A. This new method, which is still patent-pending, consists of a pull-out piece lever system that enables the watchmaker to remove the winding stem from the dial side. 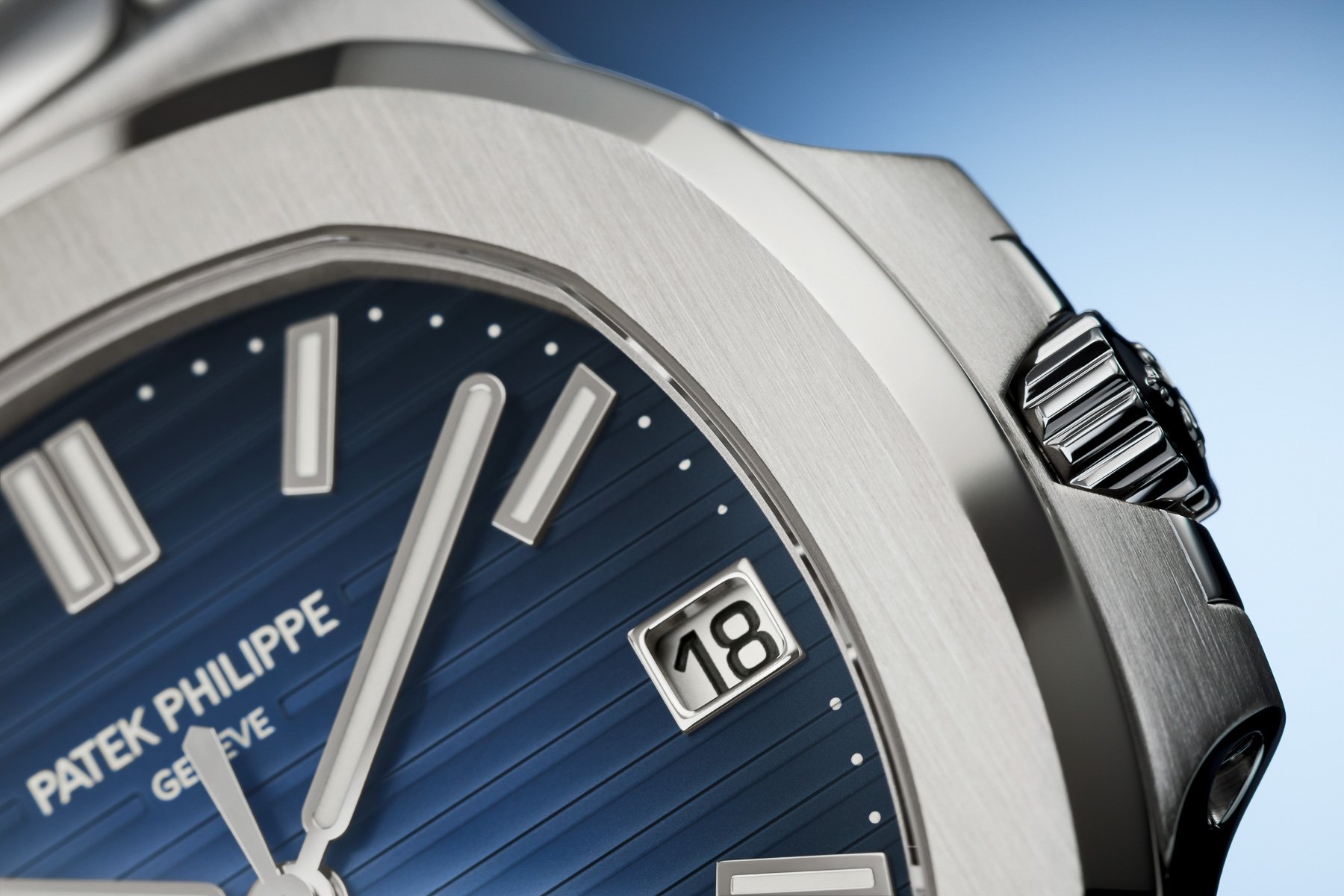 As you’ve probably noticed already, the new Patek Philippe Nautilus 5811/1G dial is a different color now. It has this blue sunburst dial with a black-gradient rim. On the dial, you’ll find white gold hour markers and baton-style hands, also in white gold. The date window has a white gold frame, and Patek’s “40 years” font is used for the numbers. 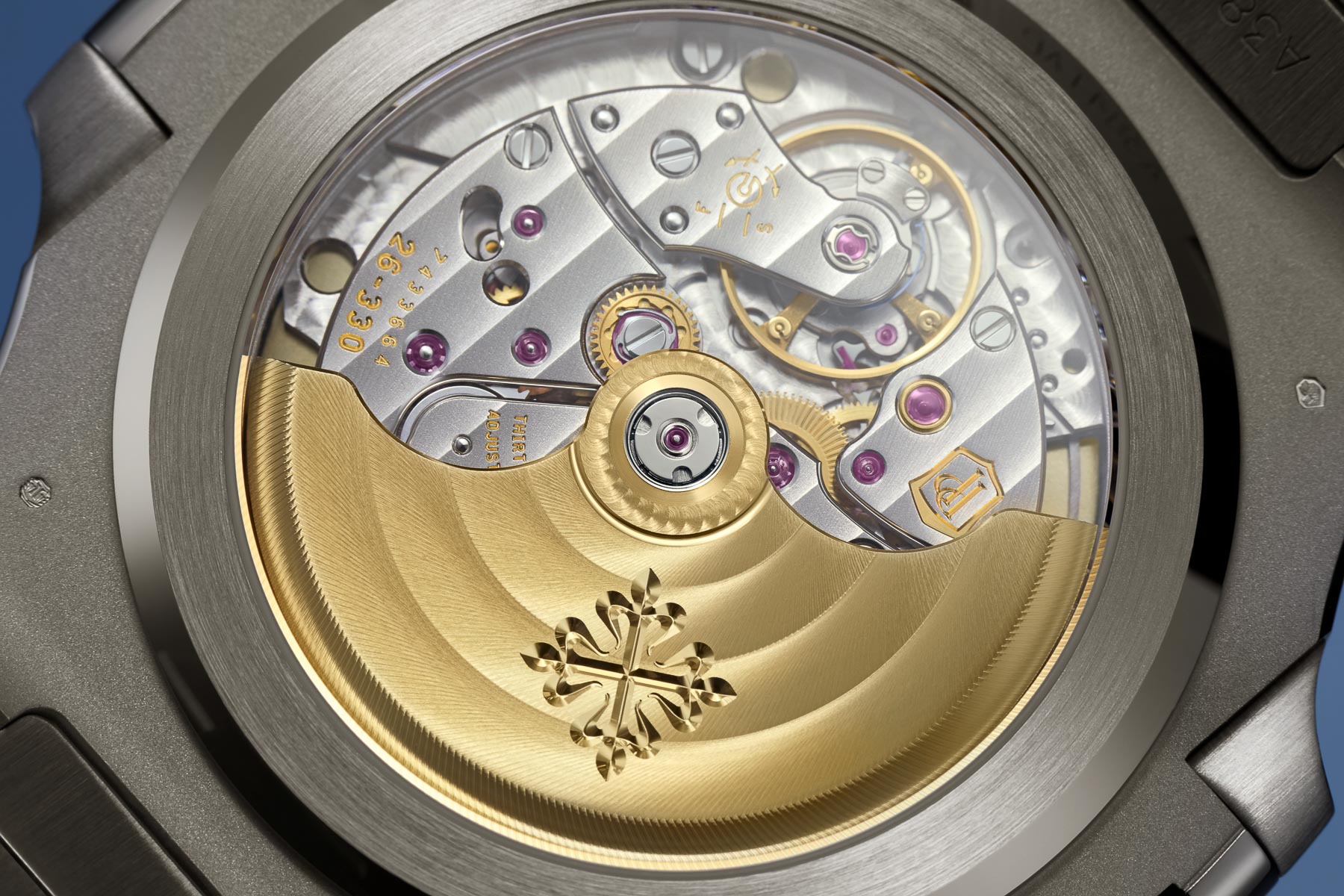 Inside the new Patek Philippe Nautilus 5811/1G is the brand’s caliber 26-330 S C. This self-winding movement was also used in the last iterations of the Nautilus 5711/1A. You can observe the movement via the sapphire crystal on the backside of the watch, like on the previous Nautilus three-hander. The caliber 26-330 S C is only 3.3mm thick (or thin). It has a power reserve of 45 hours and hacking seconds, and it ticks at 28,800vph. Additionally, the winding rotor is made of 21K gold. This thin movement allows the new Nautilus 5811/1G to have a very impressive case thickness of just 8.2mm. 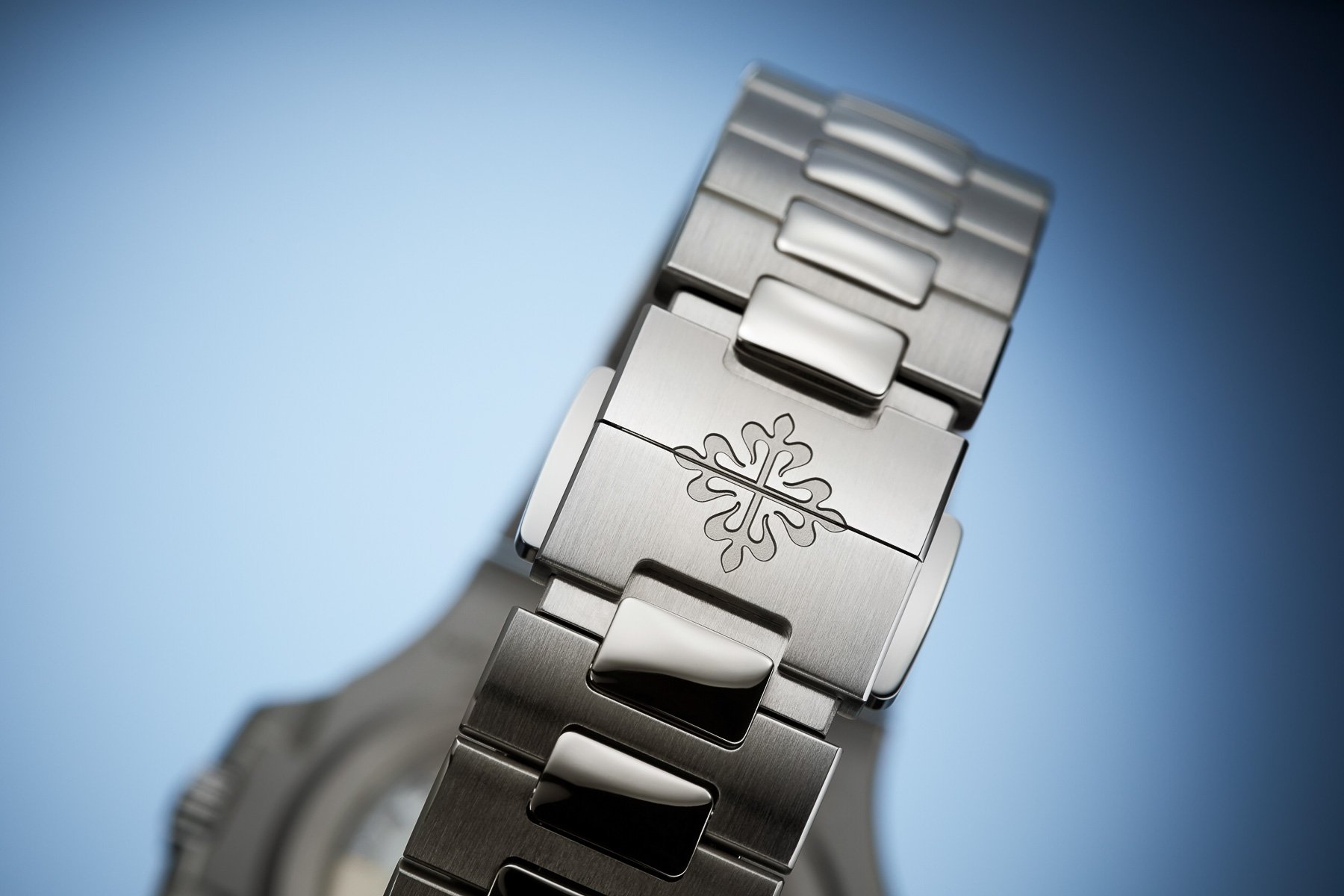 The Nautilus 5811/1G comes on a white gold bracelet with a new fold-over clasp. You can also extend the clasp by 2mm or 4mm using a lockable adjustment system. According to Patek Philippe, it’s easy and quick to use. Patek’s new Nautilus 5811/1G is also water-resistant to 120 meters. It carries a retail price of  €69,200 / US$69,785. 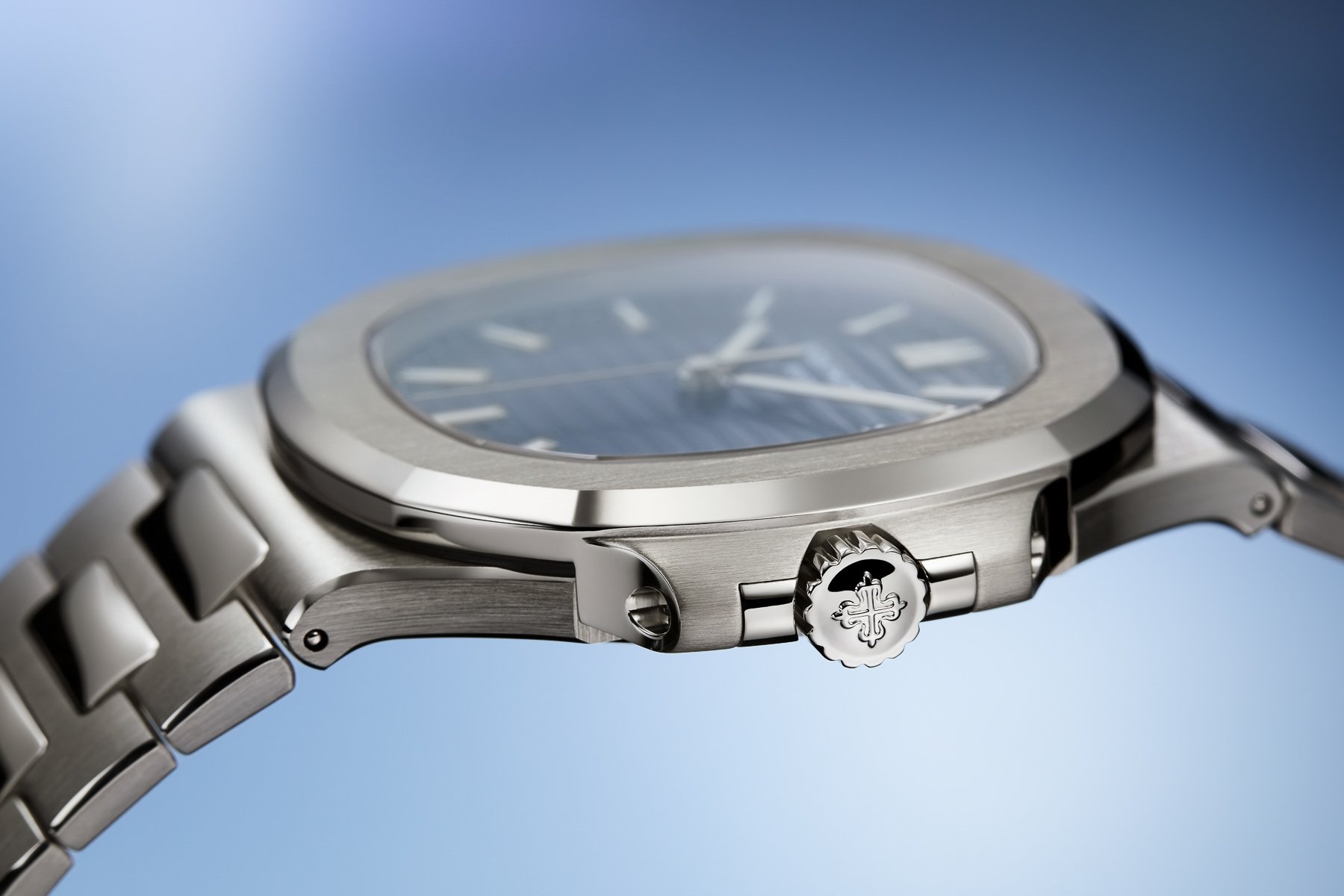 Our take on the new Patek Philippe Nautilus 5811/1G

We had already heard some rumors about the new Patek Philippe 5811/1G, but we hadn’t given them much thought. It is often better to wait and see what will happen before we start commenting. I have to admit that the Nautilus 5811/1G does not disappoint. I don’t mind the extra millimeter added to the case because we get a two-part case in return instead of the former three-part case of the 5711/1A. It was the main reason my colleague Gerard went for an early 3700/1A and let go of his 5711/1A. Some other upgrades are welcome, like the fold-over clasp and the extension system on the white gold bracelet.

To be frank, I prefer an introduction like this white gold Nautilus 5811/1G over an existing/discontinued steel model with a Tiffany dial. This has more substance to it. The price is also substantially higher than the steel Nautilus’s last retail price (around $35K), but those weren’t available anyway. And let’s not forget that this is white gold, not steel. I hope the new Nautilus 5811/1G will see a fair distribution to the enthusiasts and collectors of these watches. I can imagine the phone has been ringing off the hook since the moment the press release went out.

Let us know what you think of the new Patek Nautilus 5811/1G in the comments.