MeisterSinger Neo Zeigerdatum Is A New Watch With An Old Heart

For MeisterSinger, one hand is the norm. Apparently, no one told the MeisterSinger Neo Zeigerdatum. Yes, we’ve seen multi-hand dials before, but not like this. A second pointer gives this new member, available in two sizes, a character of its own.

Everyone likes breaking the rules, right? Tearing up the book and trying something new is fun. And while MeisterSinger remains dedicated to its single-hand concept, experimenting with subtle tweaks should probably be encouraged.

I think the crucial aspect of this design is that the second pointer (that stubby little red/black thing poking out beneath the large central hand) does not play any part in indicating the time itself, only the date. For the sake of design continuity, this is a good thing. Sure, MeisterSinger has played fast and loose with its own rules on occasion (specifically with the Singulator model, which used a whopping three — yes, three — hands to tell the time). This time, however, as with models that feature a hand-indicated power reserve, it feels kind of within bounds. 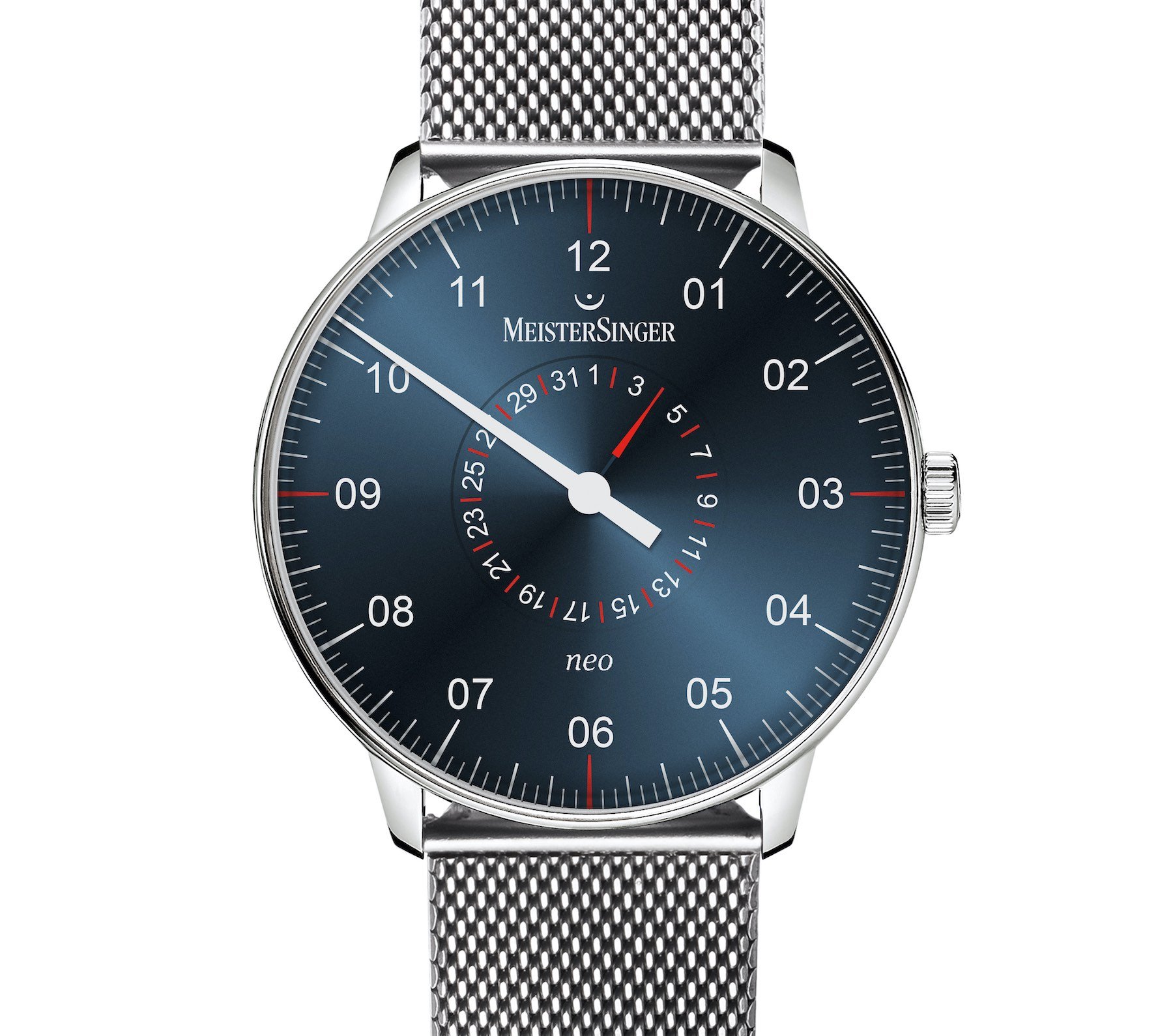 The question is, is it a worthwhile addition to the collection? We have a time and date model in the Perigraph or Pangea Day Date series, so why do we need another? Well, it is always nice to test one’s creativity, and MeisterSinger is exploring different ways of doing the same thing in a visually engaging manner. I think I refer the Perigraph for its simplicity, but there is a cool, retro-regulator look to the Neo Zeigerdatum that I’m sure will appeal to a lot of people.

And talking of appealing to a lot of people, how about that blue? The blue sunray dial is truly stunning. The icy white option is a cool and clean choice for the more reserved wearer. But better still, this model is available in multiple sizes so everyone can join in on the fun. 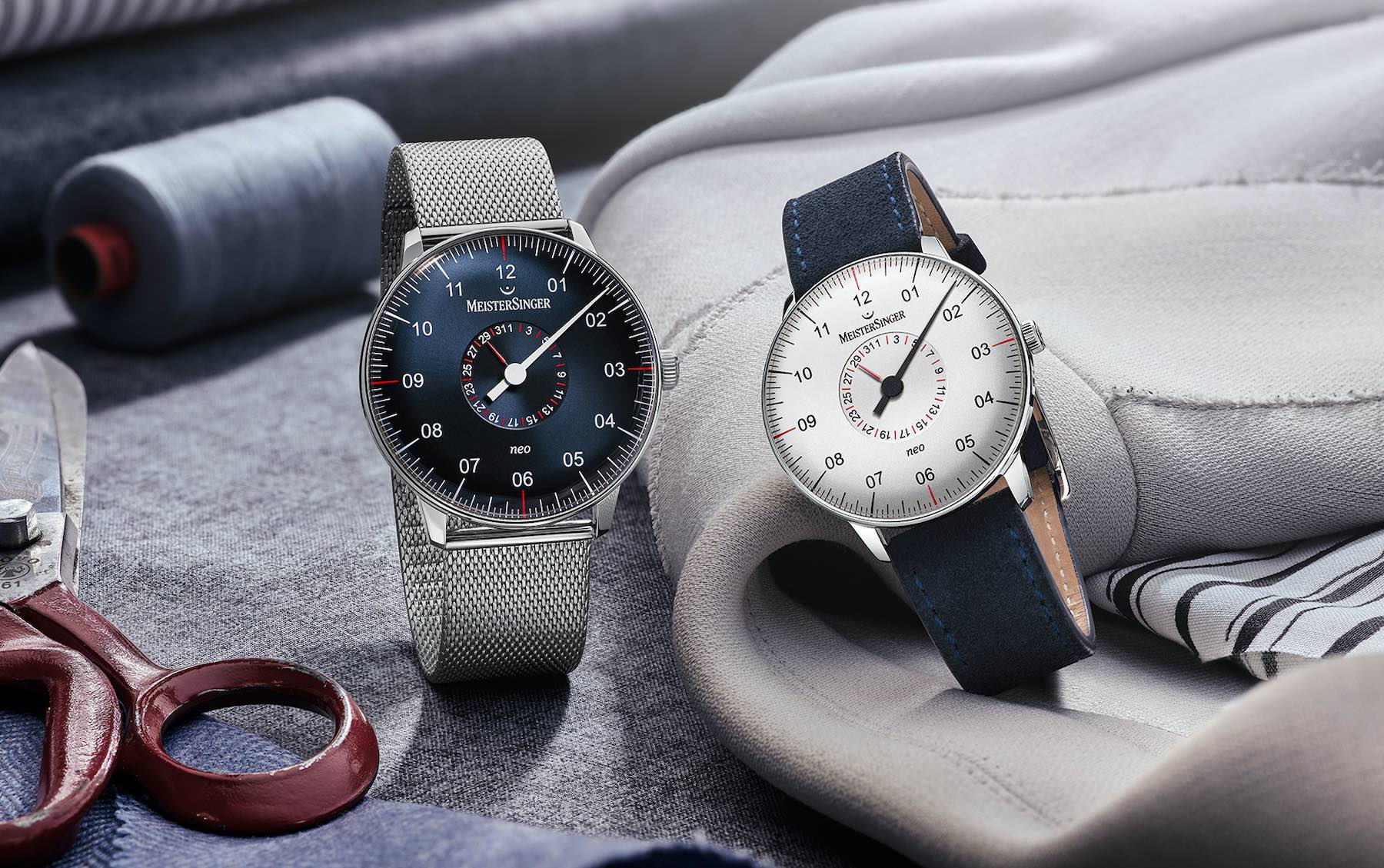 The bigger of the two MeisterSinger Neo Zeigerdatum models is just 40mm wide. The smaller version? A refreshingly old-school 36mm. Doubling down on the vintage vibes is the use of domed hesalite crystal instead of sapphire. The result? A warm, inviting visage that sets the tone for this family: Stylishly small and effortlessly elegant. And yet despite the diminutive dimensions, these models are powered by Swiss-made automatic movements, meaning none of the functionality is sacrificed in pursuit of aesthetics. 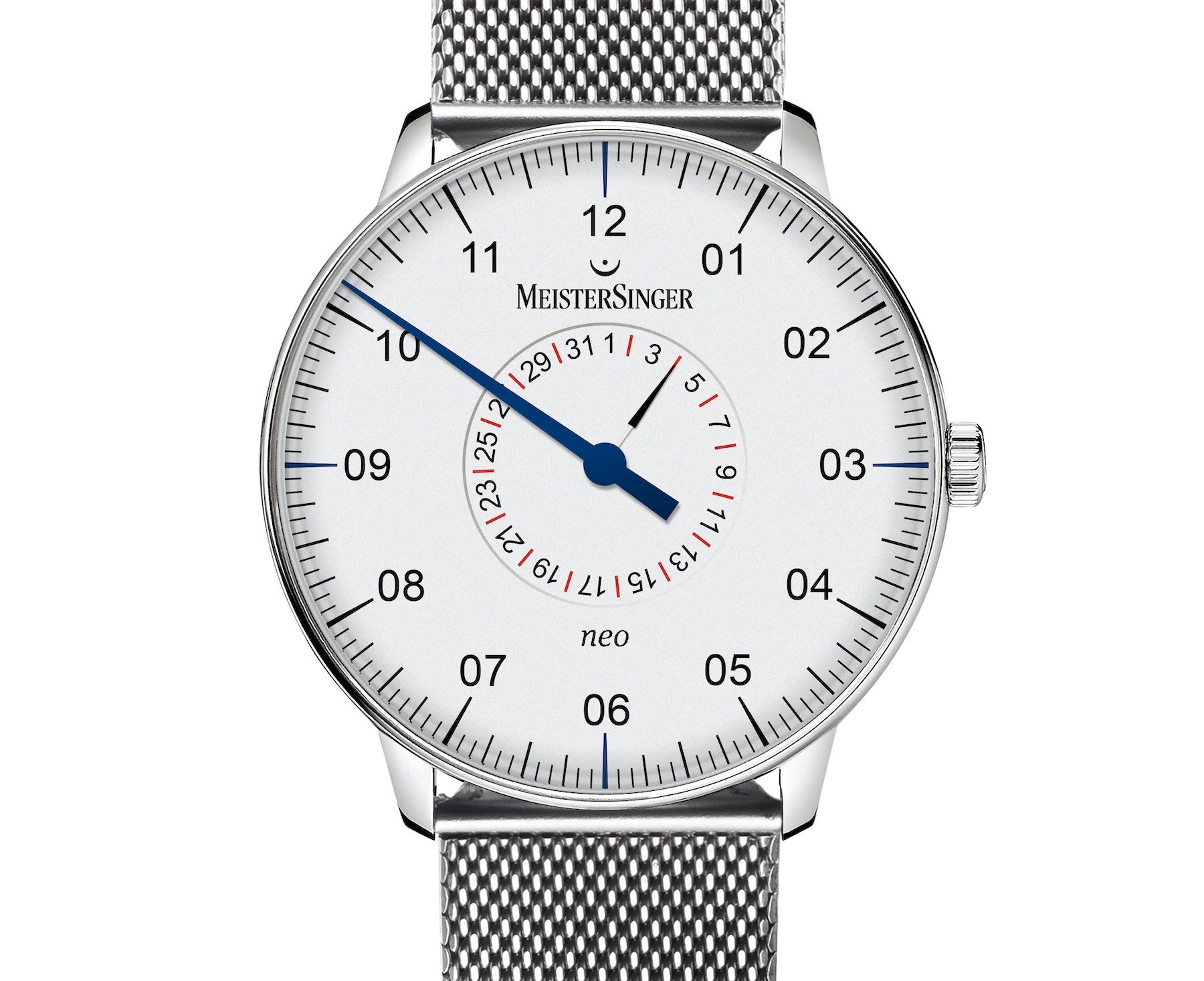 There is something inescapably ancient about all designs from MeisterSinger. I think this comes from the watches’ unavoidable similarity to sundials. Those single hands look very much like a sundial’s gnomon — the pin that casts the shadow onto the dial. While the date function is a relatively recent addition to wristwatch technology, the earliest dates on watches were not shown through a window (as has been the norm since Rolex released the Datejust in 1945). They were, instead, indicated by a hand. And so, although the ancientness of sundials and the relative modernity of the pointer date function misalign by several centuries, both are categorically “old” as far as this generation of watch lovers is concerned.

These “new” models will be available from March/April 2020 and priced at €1,290 for the smaller model and €1,390 for the plus-size variant. Learn more at MeisterSinger’s official website.