Made in Japan – Hands-On Review Of The Minase 7 Windows

I had never heard about Minase watches, and that’s perfectly explainable as they were only available in Japan till now. Minase is a company that started as a spin-off in 2005 of a cutting tool manufacturer by the name of Kyowa Co. (1963). With an annual production of 500 pieces only, I am pretty sure that not many of you heard about Minase watches. Now, Minase introduces a limited watch of 40 pieces that will be available outside Japan. The Minase 7 Windows, referring to the number of sapphire crystals used in the case.

According to Minase, all 500 watches have been hand-made in the workshops in Japan. Located in the Akita prefecture, which surroundings are similar to those in Vallee de Joux in Switzerland. The Minase 7 Windows that was sent to us by the European distributor is the first watch to be offered outside Japan. A rectangular watch, but with some odd shapes that I’ve never seen before with any other brand. 7 sapphire crystals have been used to make this watch as transparent as possible. Besides all that sapphire, one of the other things to notice are all the polished and brushed facets. All done by hand, which must be painstakingly work. 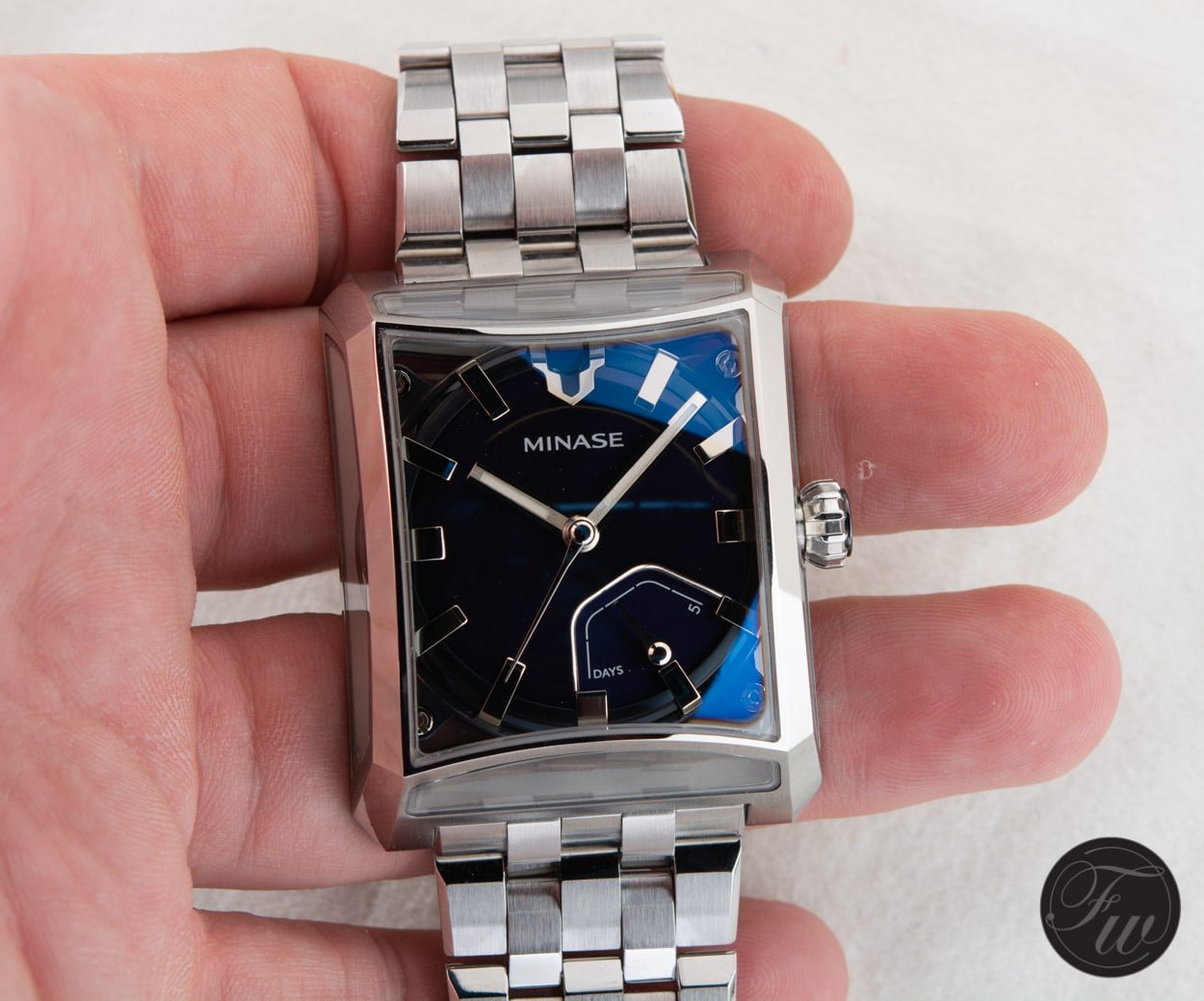 Minase refers to the polishing work as ‘Sallaz’, a technique for mirror surface polishing. As we all know, in Japan they have their way with polishing, given the fact that the Zaratsu (blade) polishing has become the topic of discussion on various social media platforms, and on on-line magazines like ours. By polishing only, a block of stainless steel is turned into a symmetrical triangular pyramid shape. Sallaz refers to the manufacture or brand name of the German made polishing machine, that eventually also became synonym for blade polishing.

That said, the watch surely looks impressive as every facet has been finished. 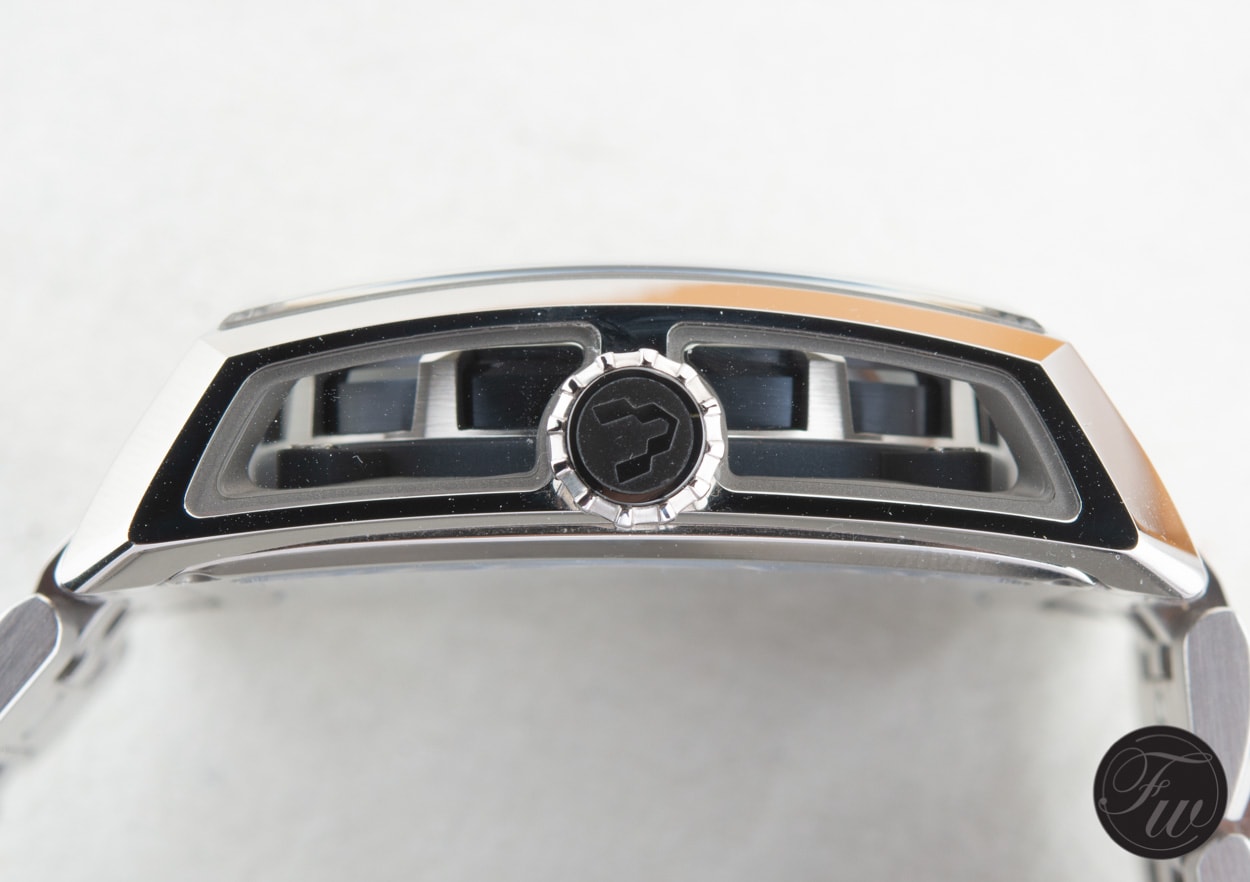 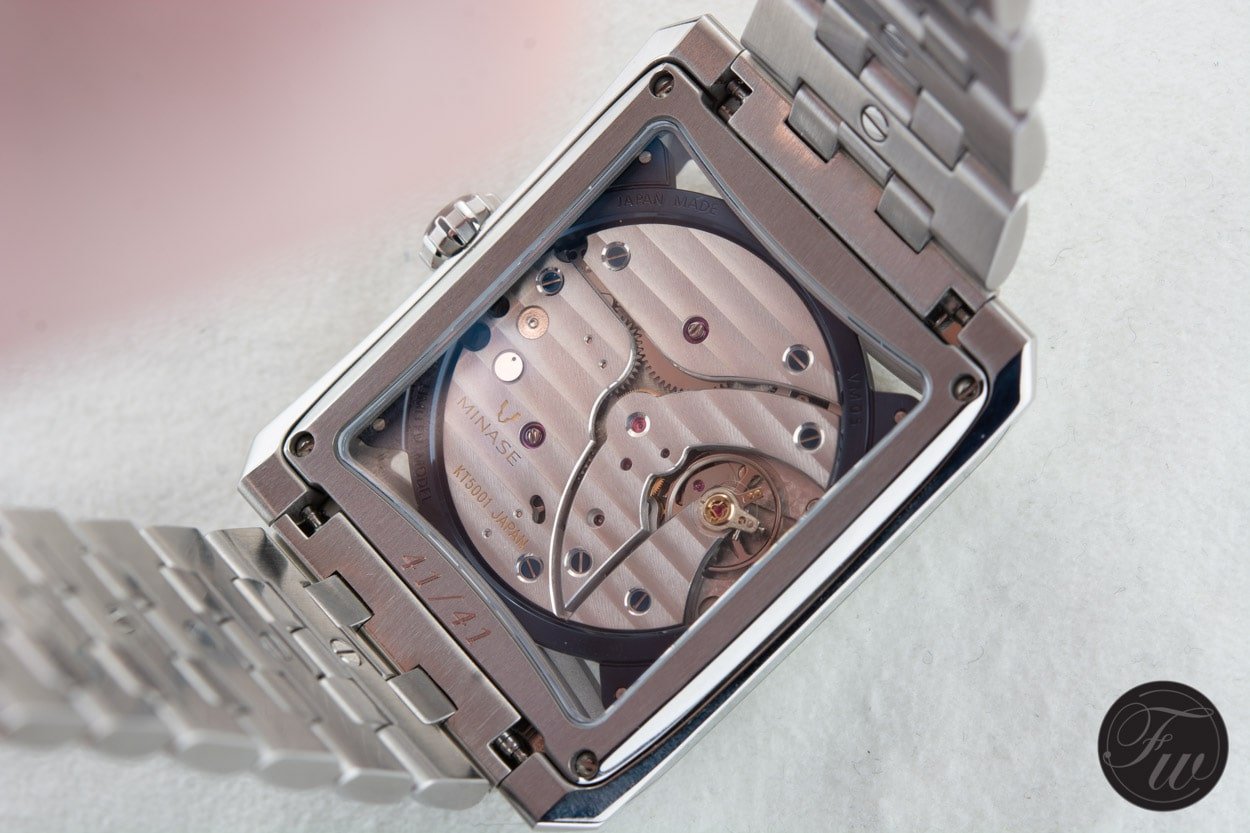 What I don’t understand, to be honest, is that the other 6 sapphire crystals do not enable you a view on the movement. Unlike Omega’s De Ville Hour Vision for example, where a part of the case band was made of sapphire, that allowed you to look at their calibre 8500 movement. If you design a watch like this, with 7 sapphire crystals, it would have been a nice feature to ‘open up’ the movement a bit for the fans. The KT5001 calibre is not an in-house developed movement, but has been finished by Minase for the 7 Windows. There is no official wording on the base caliber that has been used, but it appears to be a Technotime movement. 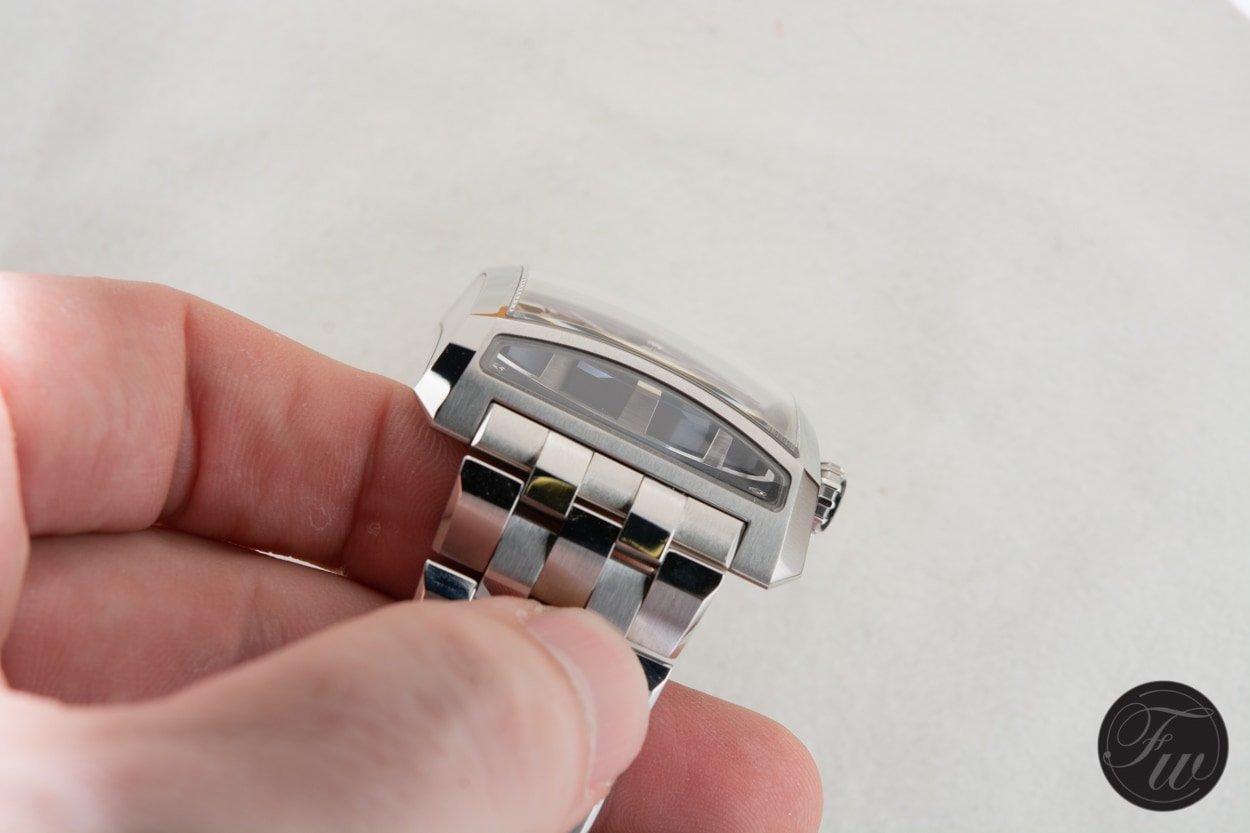 The dial of the Minase 7 Windows is quite hard to capture, as it is domed and very shiny. Minase talks about a three-dimensional dial, but in my opinion, that’s always the case. But I understand what they mean, it is a very layered construction that offers a lot of depth. The beautiful polished hour markers and hands give a great contrast with the dark dial. The AR-coating causes the blue shine on the dial on the images though. The official press release seems to be some sort of translated document, as I noticed a very unclear description of the dial. What has become clear is that the dial is a little construction of its own, inside the case, placed on top of the movement and sits on the inner round case. It is actually this round inner case that blocks your view on the movement from the ‘windows’. 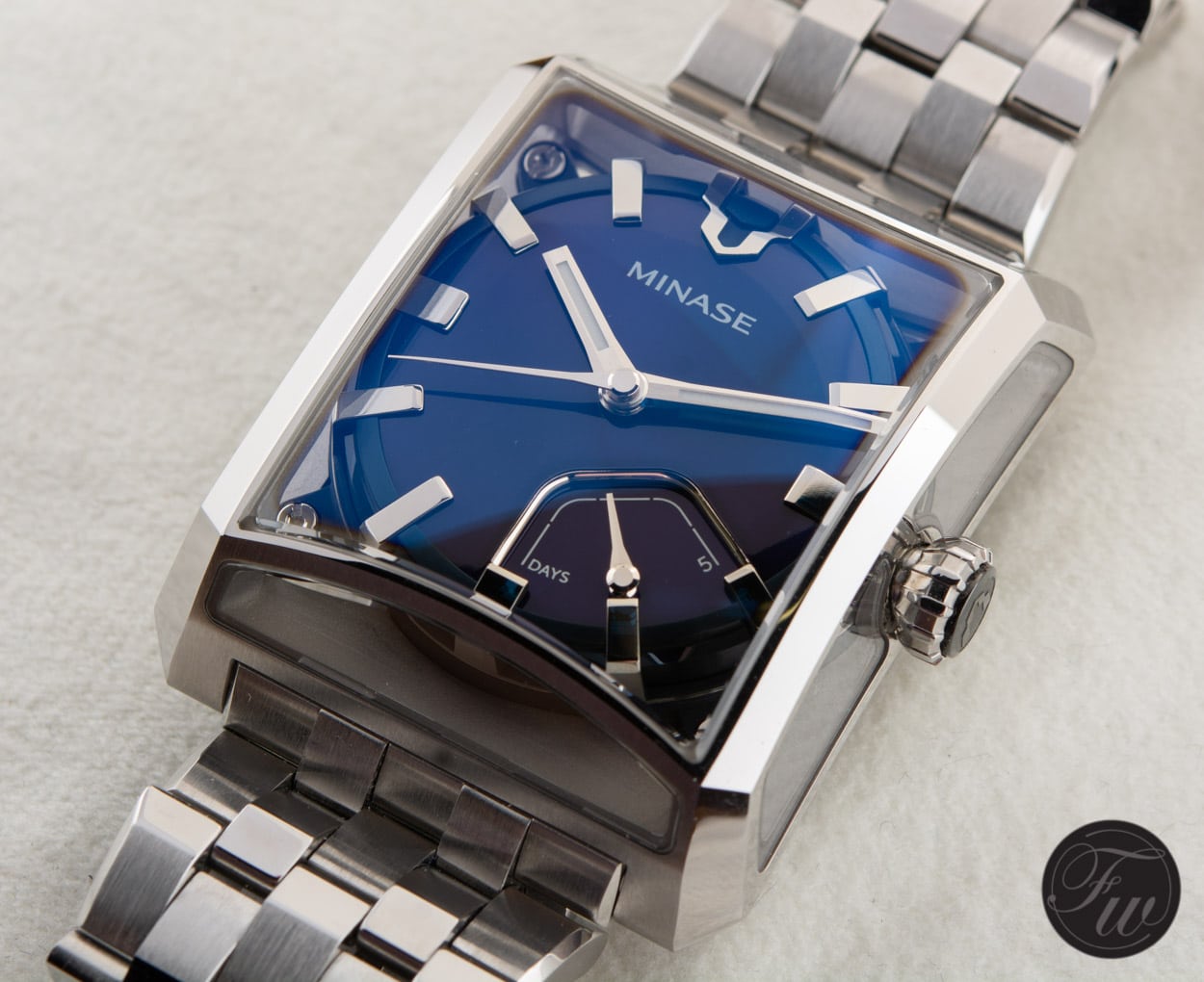 The Minase 7 Windows was a bit larger and heavier than I’d pictured, with its 38 x 46.5 x 14mm dimensions and a weight of 160 grams. But on the wrist it actually sat quite comfortable, so no worries there. What worried me a bit is the price tag of  €10.980,- for a brand that has virtually no known reputation (and thus feedback) outside Japan and with a very outspoken design. I don’t mind an outspoken design, but that will immediately will cut off many possible customers. Also, this watch really needs to be observed closely and demands a passion for the typical polishing work and dial design/construction. If that is the case, the Minase 7 Windows is a watch that will not let you down.  This watch is not for the person who is aiming for a GMT-Master, Big Pilot or even a Royal Oak, it is a watch that is there to please those who love traditional (Japanese) craftsmanship and smitten by this type of design. There’s only 40 of them, and I believe that this number probably will cover the niche market for watches like this. 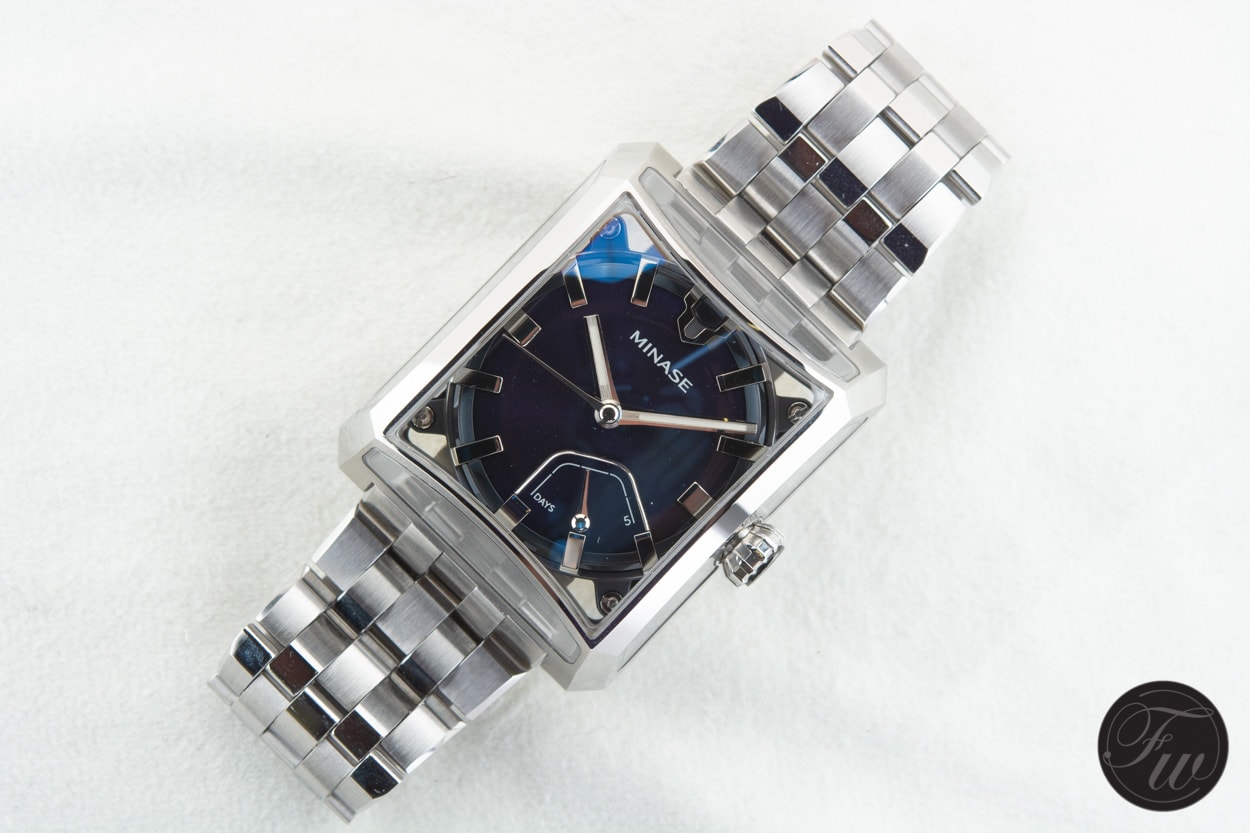 That said, and personal taste aside, the Minase 7 Windows is a well-constructed watch with a great finish on the dial, case and bracelet. The movement is not in-house, but that’s also not the main attraction of this watch. Besides that, it is a nice looking (and finished) movement and has a 120-hour power reserve. Not only the case shape is very unusual, also the layered dial with a high-gloss finish and polished hour markers and hands are unusual but beautifully done.

On the official Minase website, you’ll find more information about the used techniques on their watches.