A dive watch does a lot. It’s a tool for a safe dive in lieu of (or in combination with) a dive computer. It’s becoming an acceptable GADA (Go Anywhere, Do Anything) in modern culture. And, of course, dive watches capture an aesthetic and serve as robust companions for all of us non-divers. But of all the dive watches with all the additional complications possible, there are hardly any that have a moonphase indication. The Oris Aquis Dat Watt Limited Edition and Blancpain’s Fifty Fathoms Bathyscaphe Quantième Complet Phases de Lune show the phases of the Moon within the confines of a unidirectional diver’s bezel. The Panerai L’Astronomo “Luminor 1950 Tourbillon Moon Phases Equation of Time GMT” comes from water-watch heritage. It’s the only one that won’t be getting its feet wet though. Hey, pickings were slim.

Imagine you’re planning a nighttime pleasure dive off the shores of Bonaire in the Southern Caribbean — picturesque, shallow shore diving. You tell your buddy your plan and the tentative date. He looks at you quizzically. “Sure,” he says, “but that’s the New Moon. It’s going to be pitch black out there. Why not go on the Full Moon?” Indeed, why not enjoy the shallow’s beauty under nature’s pale spotlight? But planning a dive around the phases of the Moon was something you never considered.

Beyond using a moonphase for nocturnal oceanic activity, the Moon and Earth’s oceans have such a pronounced relationship that it amazes me that the combination of the dive watch and moonphase isn’t celebrated more horologically, even as a novelty. Sure, dive watches are still maintaining the flagging persona of a tool watch, but if there were ever a practical application to a moonphase indicator, it would relate to the ocean. 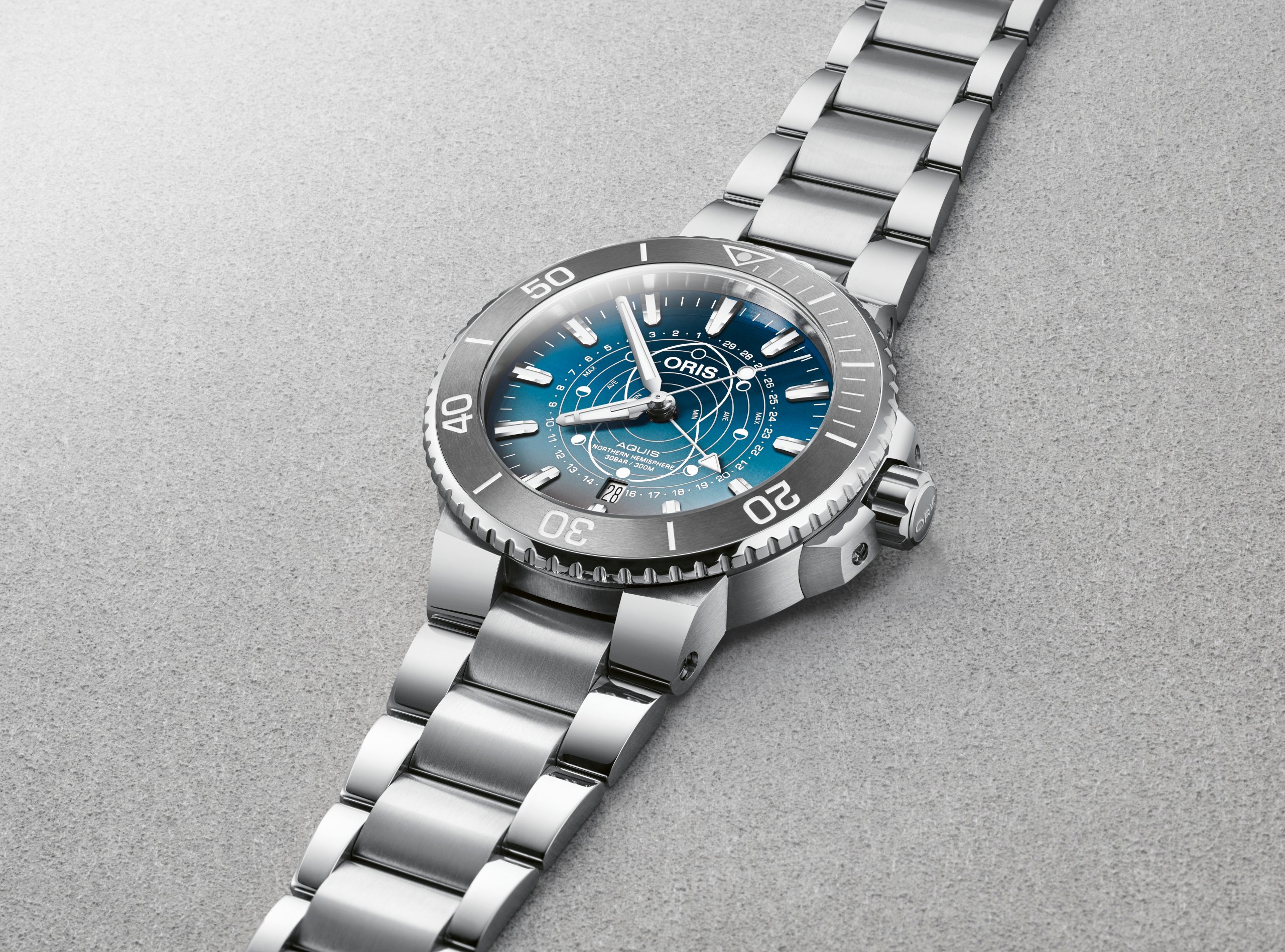 Both their price points and specs keep Oris Aquis dive watches firmly in the tool-watch category. The Oris Aquis Dat Watt Limited Edition is one such Aquis that’s relatively accessible and thoroughly robust, moonphase included. It was created in conjunction with the Common Wadden Sea Secretariat to raise funds and awareness about the Wadden Sea, an international UNESCO World Heritage Site and the largest tidal flood plains in the world. Fitting the motif, this moonphase is in fact touted as a tidal range indicator, with white lines on the dial showing the median level of the tide over a full cycle. Since tides are influenced by the Moon, that “full cycle” is the lunar cycle. The phases of the Moon are indicated around the dial for the separate indicator hand to point to. 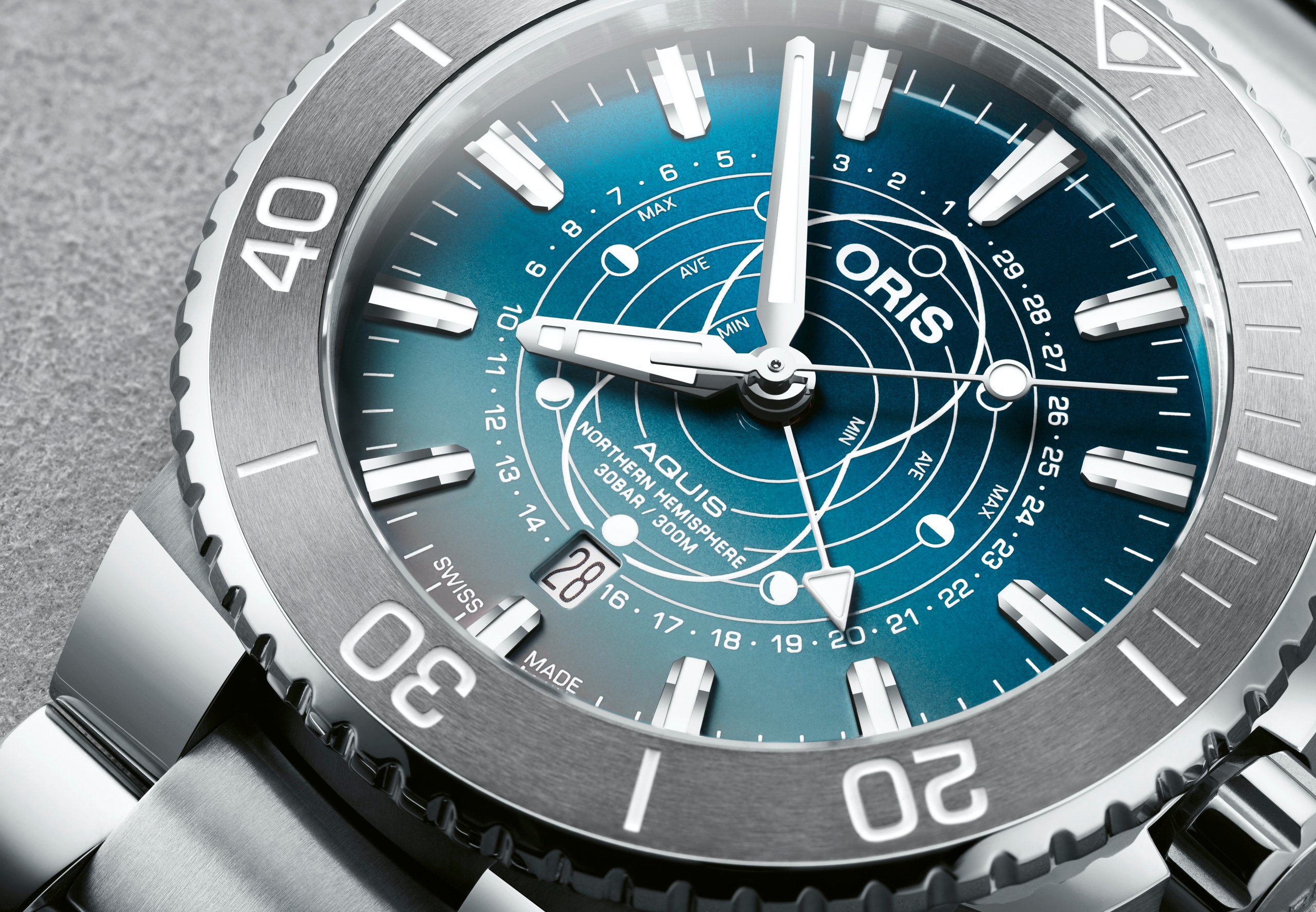 It’s a gorgeous watch and definitely one I’ve had my eye on since its introduction. I’ll most likely wait until all 2009 limited editions sell out and regret it. But c’est la vie. What I like about it is that it takes all of the standard Aquis elements — 300m water resistance, elegantly stub-lugged case, and a unique design for the hands and indices — and imports a moonphase indicator that doesn’t visually or thematically compromise its dive watch-ness. 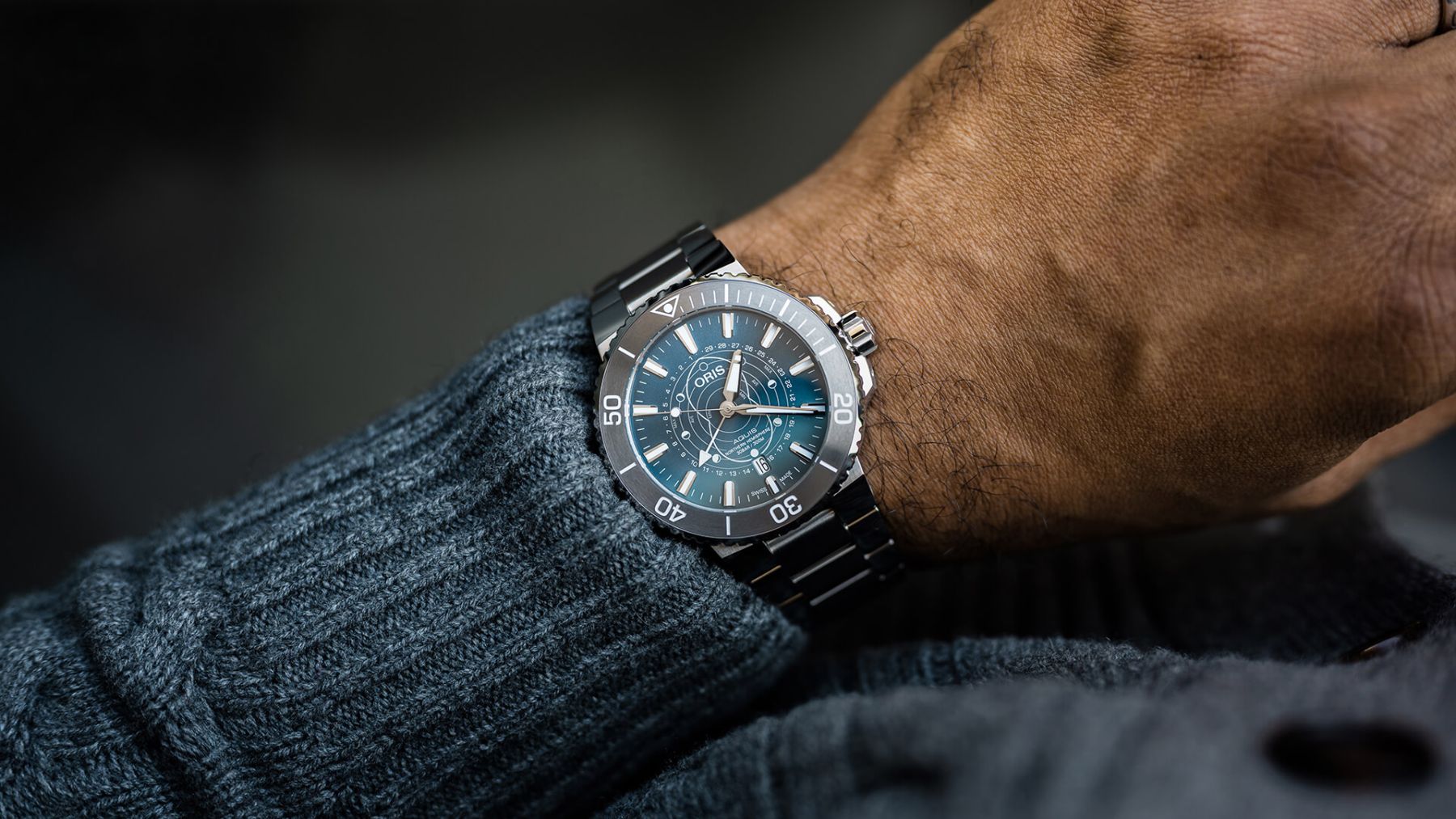 The 43.5mm-diameter case creates a dial with some real estate, which the tide/moon chart fills perfectly. Steering clear of some goofy, smiling, man-in-the-moon depiction that rotates in and out of view was a good call. This isn’t Oris’s first time around with this complication in this exact orientation. The brand used it for the first time in 2015 for the ProDiver Pointer Moon and a few Artix models. The Oris caliber 761, based on Sellita’s SW220-1, is what provides the simple pointer hand. The extra hand and printed charts impart a no-nonsense informational quality to the complication, and that’s exactly the kind of moonphase that fits a tool-ish dive watch best.

At $2,750, someone can pick up one of the remaining pieces and be proud to own one of the rarest combinations of watch features. And with a modified Sellita with a simple moonphase module beating inside, maintaining it unto perpetuity won’t break the bank either. That’s exactly what we need from our tools. Plus, the gradient blue-to-gray dial color is pretty. 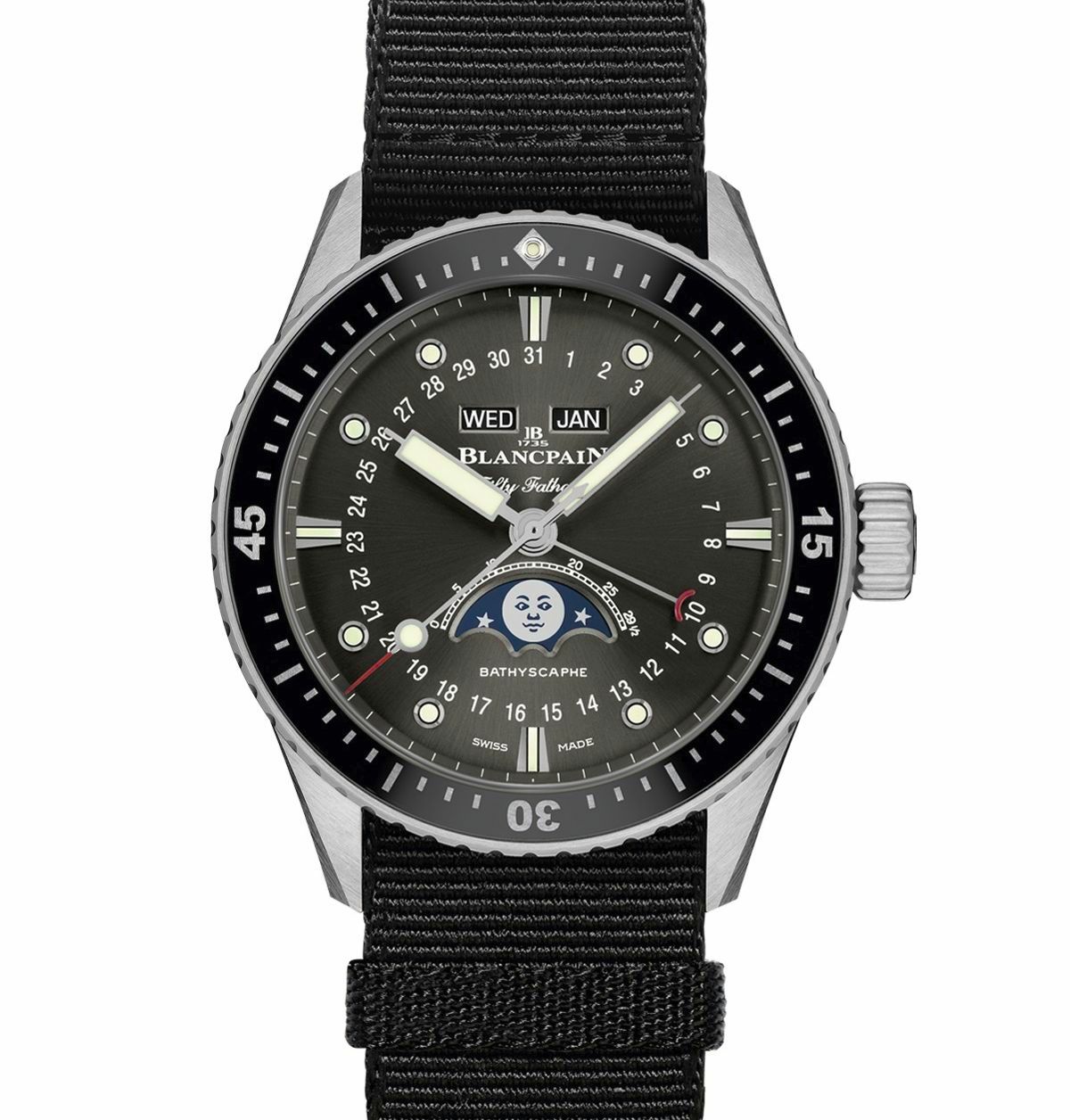 Despite its history with tool watches, Blancpain as a brand oozes with luxury. Somehow, the manufacture makes even its non-Bathyscaphe Fifty Fathoms models positively luxurious, despite them being based on a rough-and-tumble tool watch. It’s fitting then that Blancpain should add some very luxury-oriented complications to the Bathyscaphe diver. 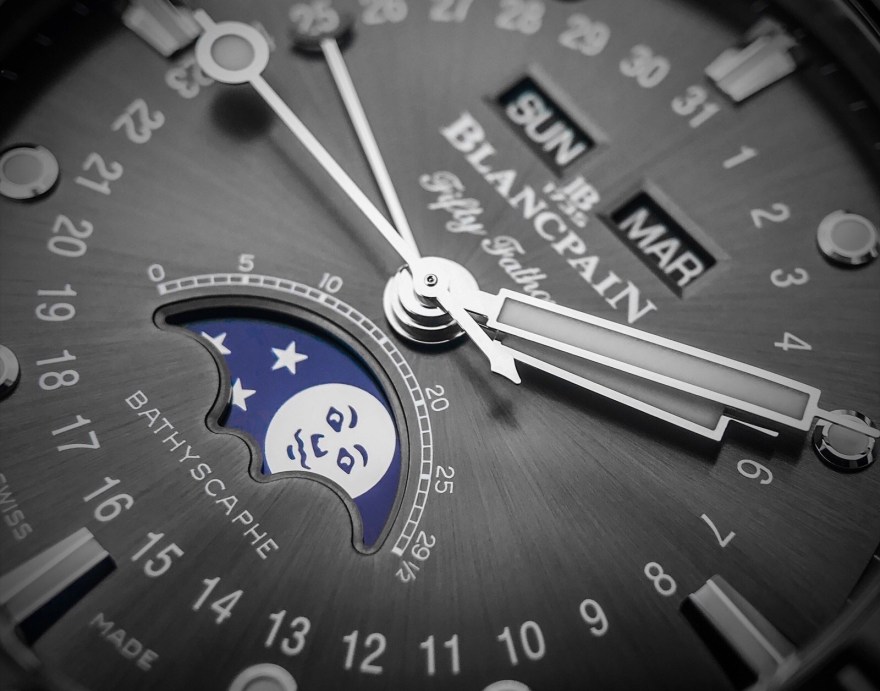 A moonphase dress watch with a diver’s bezel

In this case, the addition of a full calendar and a moonphase complication transforms the Bathyscaphe. It goes from a gentleman’s diver to a complicated dress watch with a dive bezel and a skin-diver case. The included textile strap and brushed steel case surfaces are convincing, but not enough. The script “Fifty Fathoms” logo and the navy-blue backdrop to a smiling moon seal the deal for its intended audience and use. I’d be very surprised to see this dive watch flipping backward off the edge of a boat and into the drink. It’s much more likely to be on a yacht on an arm holding a drink. 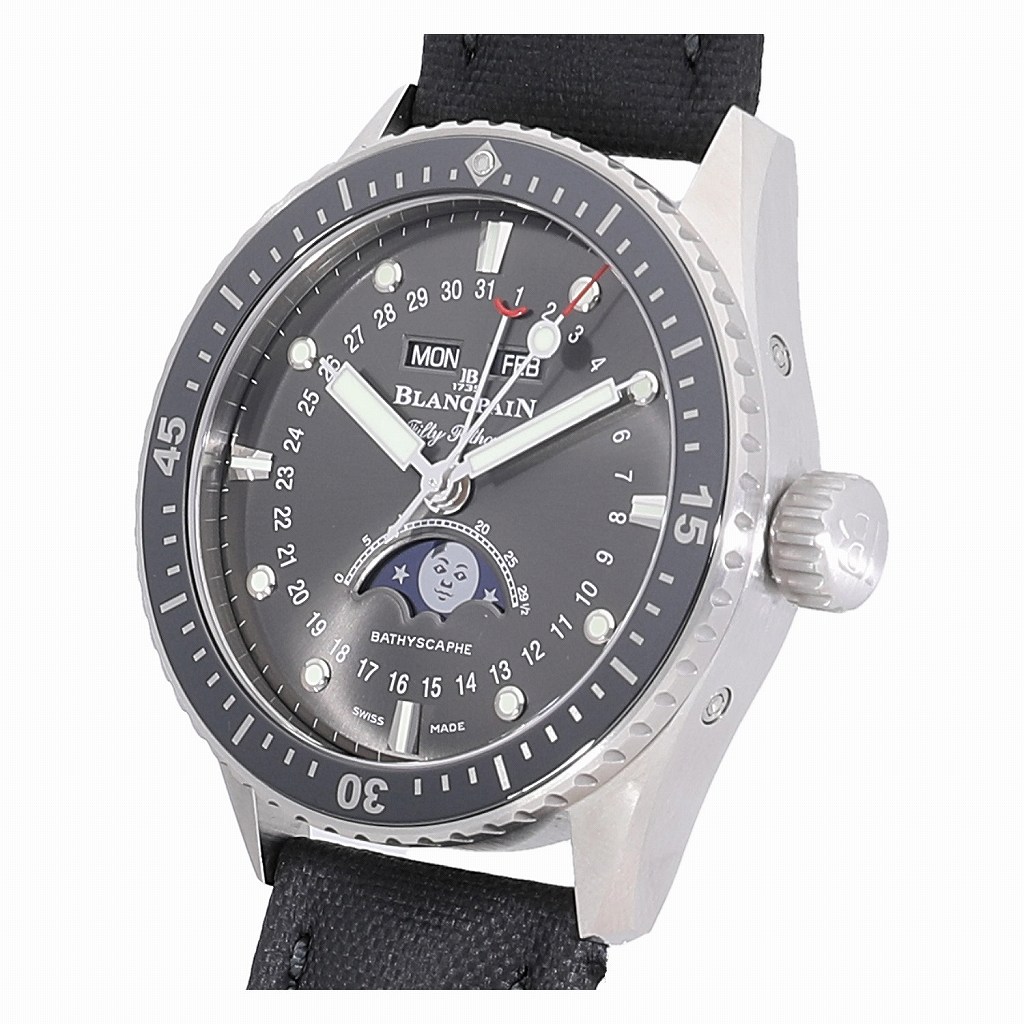 The specs, however, are mighty convincing. Technically, with 300m of water resistance, this is still very much a dive watch. The sapphire crystal and bezel insert ensure scratch resistance, and the brushed surfaces of the case will do their fair share to hide scratches as well. The movement, Blancpain’s 6654.P.4, beats at 28,800vph and has a power reserve of 72 hours. For everything that’s packed into it, the $14,800 price tag is surprisingly low. It makes the Bathyscaphe Quantième Phases de Lune almost serious about diving.

While driving through American wine country one day, I made the joke that — if I had the money — I’d buy a vineyard, rip out the grapes, and grow potatoes. It’s an insane prospect, considering the cost of land there and the money to be made off wine. In a landscape of very traditional watches with very grand complications, Blancpain has done essentially that. The brand ripped up the traditional conventions of luxury and made a (very nice) potato. And it isn’t a joke if someone buys it. Whoever does just has to figure out whether the potato it’s for making alcohol or stew. The rebel in me wants to see stew. I want the Blancpain Fifty Fifty Fathoms Bathyscaphe Quantième Complet Phases de Lune to go diving. If Blancpain’s Bathyscaphe moonphase dive watch is surprisingly accessible given its complications, the Panerai L’Astronomo Luminor 1950 Tourbillon Moon Phases Equation of Time GMT — referred to as simply the L’Astronomo from here on — is, fittingly, incredibly expensive. The $230,000 price abruptly distinguishes the L’Astronomo as anything but a tool watch. Rather, it might be a country cabin, if I can locate the front door amongst all the gears and sub-dials. This dive watch (yes, dive watch — more on that in a bit) is decidedly not for divers, or at least any divers making their livelihood from diving… Unless, of course, they’re successful treasure hunters who do not descend deeper than 100 meters. 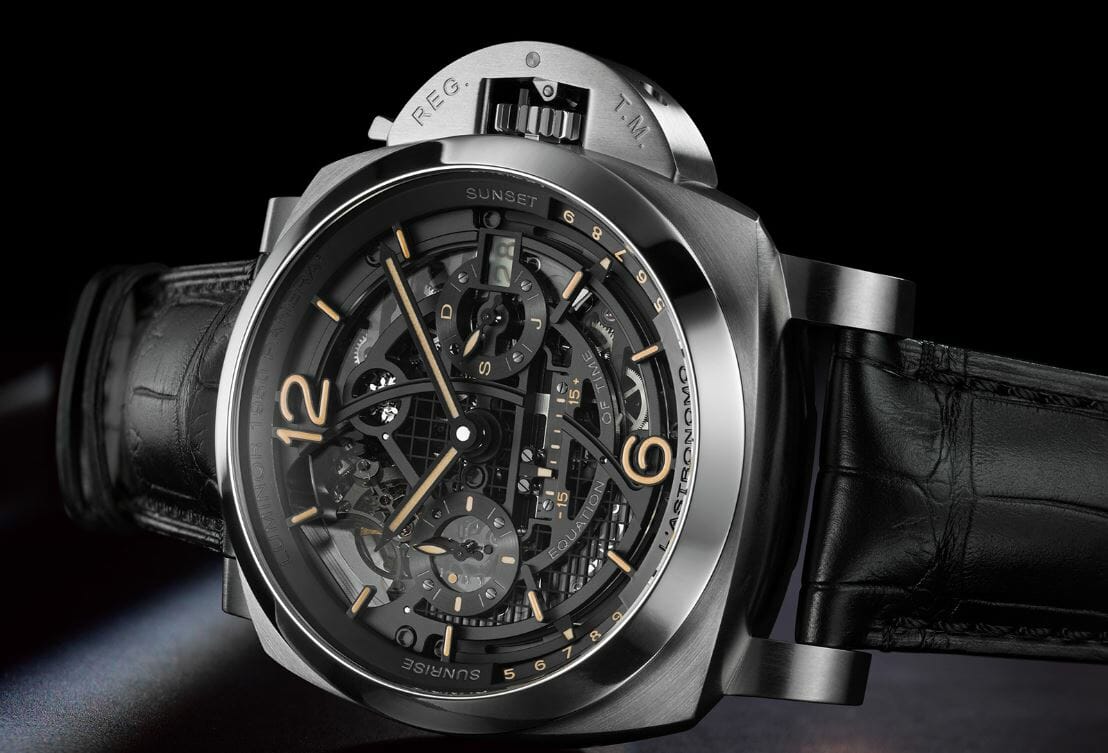 Because yes, the L’Astronomo only has a water resistance of 100 meters. Vineyards for potatoes is one thing, but taking this watch swimming is madness. Yet, I contend it is still a dive watch. Panerai’s long history and relationship with the Italian Navy is marked by many dive-intended watches. The earliest versions of these were without diver’s bezels or the currently ubiquitous 200+ meter water resistance. Panerai watches have been diving before there even was an ISO code for regulating dive-watch specifications, because dive watches in the ’40s and ’50s were simply watches that could generally survive the dives. So is Panerai’s Luminor — the base model for the L’Astronomo — a dive watch? Yes, historically. Not today. But the only way the L’Astronomo is touching the ocean is via historical references anyway. 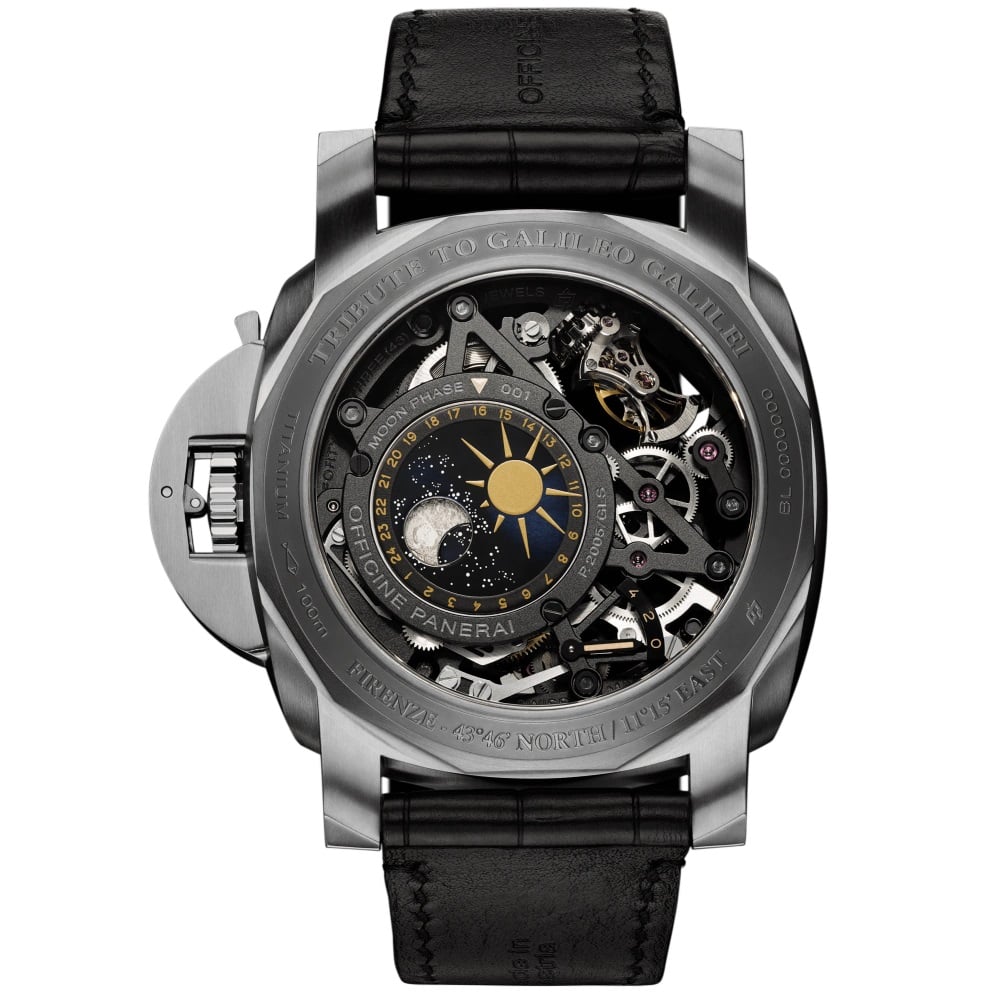 “So it’s a dive watch,” you grumble. “Where’s the moonphase?” It’s on the back, because somehow Panerai couldn’t find room to fit it on the front with the time, date, GMT hand, running seconds, sunrise time, sunset time, equation of time, and tourbillion window (also viewable from the back). The rear moonphase is incorporated into a day/night indicator, just in case you need to know that too. 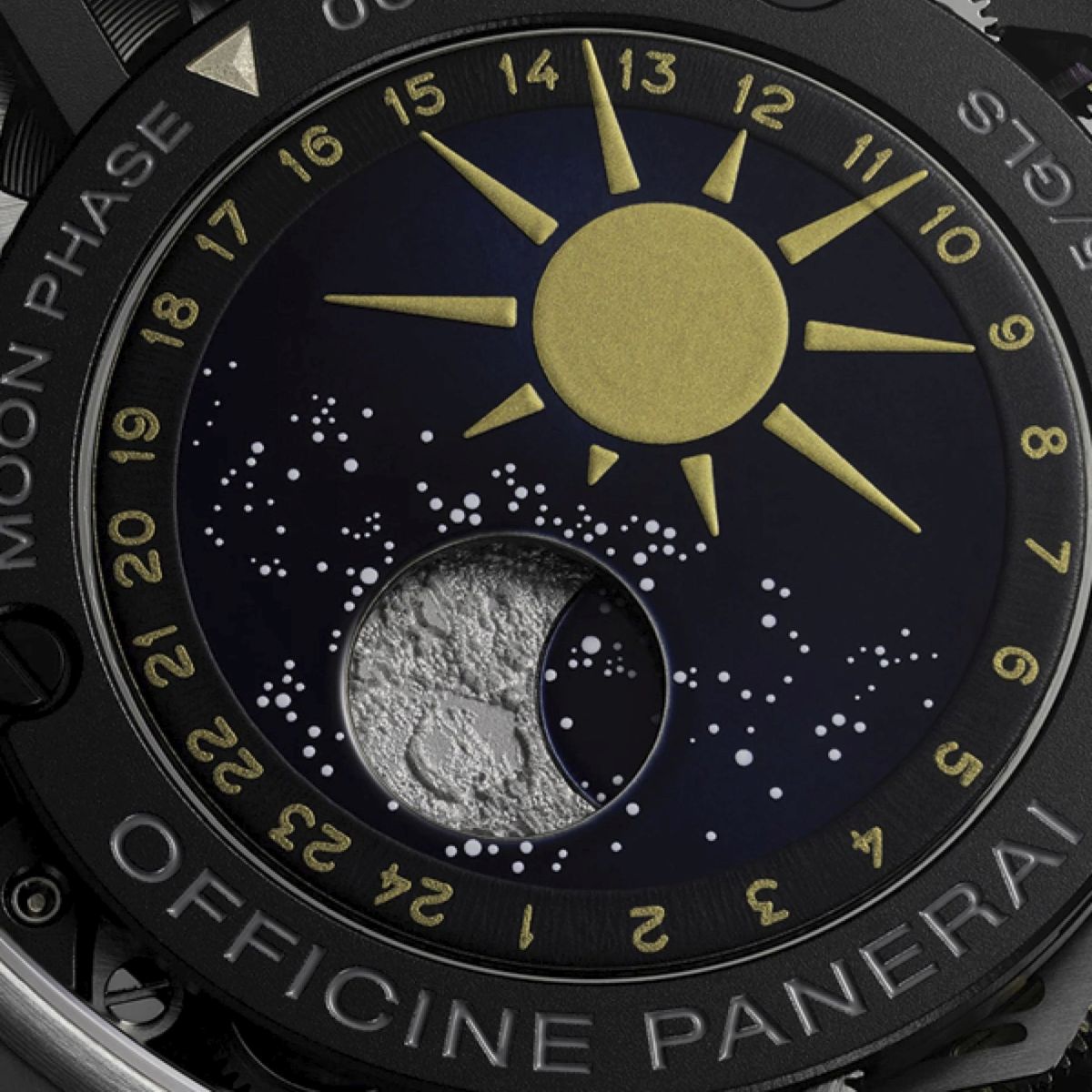 It’s a shame, honestly, that with all the investment of development and craft that went into the L’Astronomo, Panerai strayed from the water-dwelling roots of the Luminor and diminished the water resistance. Its 50mm size only just surpasses the diameter of the large, early Luminors. It incorporates the iconic Luminor crown mechanism, which is the technology that initially brought Panerai watches to 200m of water resistance. Why then, on what is arguably the most extravagant version of a truly iconic watch from one of horology’s oldest water-watch companies, are the water-resistance characteristics not at least on par with the base-model Luminor? I suspect there’s someone at Panerai who shuddered at the thought of someone foolhardy enough to think 200m water resistance would make this a good dive companion.

If the Speedmaster gets a moonphase, so should we

The Oris Aquis Dat Watt, Blancpain Bathyscaphe Quantième Complet Phases de Lune, and Panerai L’Astronomo are the only three worthy dive watches I could find with moonphase indicators, and even that was a stretch. Honestly, I don’t know why the moonphase complication is not more prevalent in the dive-watch genre. If some Omega Speedmasters get to have moonphases — a feature made completely useless once off the surface of the Earth — then why can’t watches related to the ocean have them too? The ocean is arguably more moonphase-tied than the Moon. Once you’re standing on the Moon, it’s a matter of sunrise and sunset.

If these three examples don’t do it for you, let me know what does. I hope you have better luck than I did hunting down dive watches with moonphases. Surprisingly, the one company that has several versions is… Invicta.