I fear that if Certina keeps on doing what it’s doing right now, soon I’ll run out of superlatives to describe the brand’s watches. About a year ago, Certina’s new DS Super PH500M VDST was introduced to the market. In 2021 we have yet another DS Super PH500M to drool over, and this might even be better than its sister model.

I mean that in the sense that it’s much more of an “ordinary” watch. There is no connection to an association and no orange dial. What we have is a simple yet functional diver for a fantastic price. So without further ado (and to use a cheesy pun from my dear Rob): let’s dive in.

When the VDST version came out last year, I already talked about the inspiration for that timepiece. Back in the day, Certina was a force to be reckoned with when talking about diver watches. Companies like Omega, Rolex, or Doxa ruled the market, but there were tons of other manufacturers with exceptional divers. Think of Aquastar, Blancpain, or Certina, just to name a few. The latter company had been producing divers from the ’60s. In 1968, reference 5801 123, aka the Certina DS Super PH500M, came to the market. It was a watch with a black dial, 500m of water resistance, an automatic movement, a date at three, and a diving bezel with a security lock. This piece served as inspiration for the new model in 2020 but came with a twist: to honor the request of VDST (Association of German Scuba Divers), Certina released the model with an orange dial. As such, it was not a true reedition of the legendary PH500M that took part in the Tektite experiment. Luckily for us, in 2021, Certina put its new DS Super PH500M on the market. This time the vintage DNA is fully there. The dial is black with white indices, just like its bezel with a large steel case. At 43mm, the new Certina DS Super PH500M is not a small watch at all. 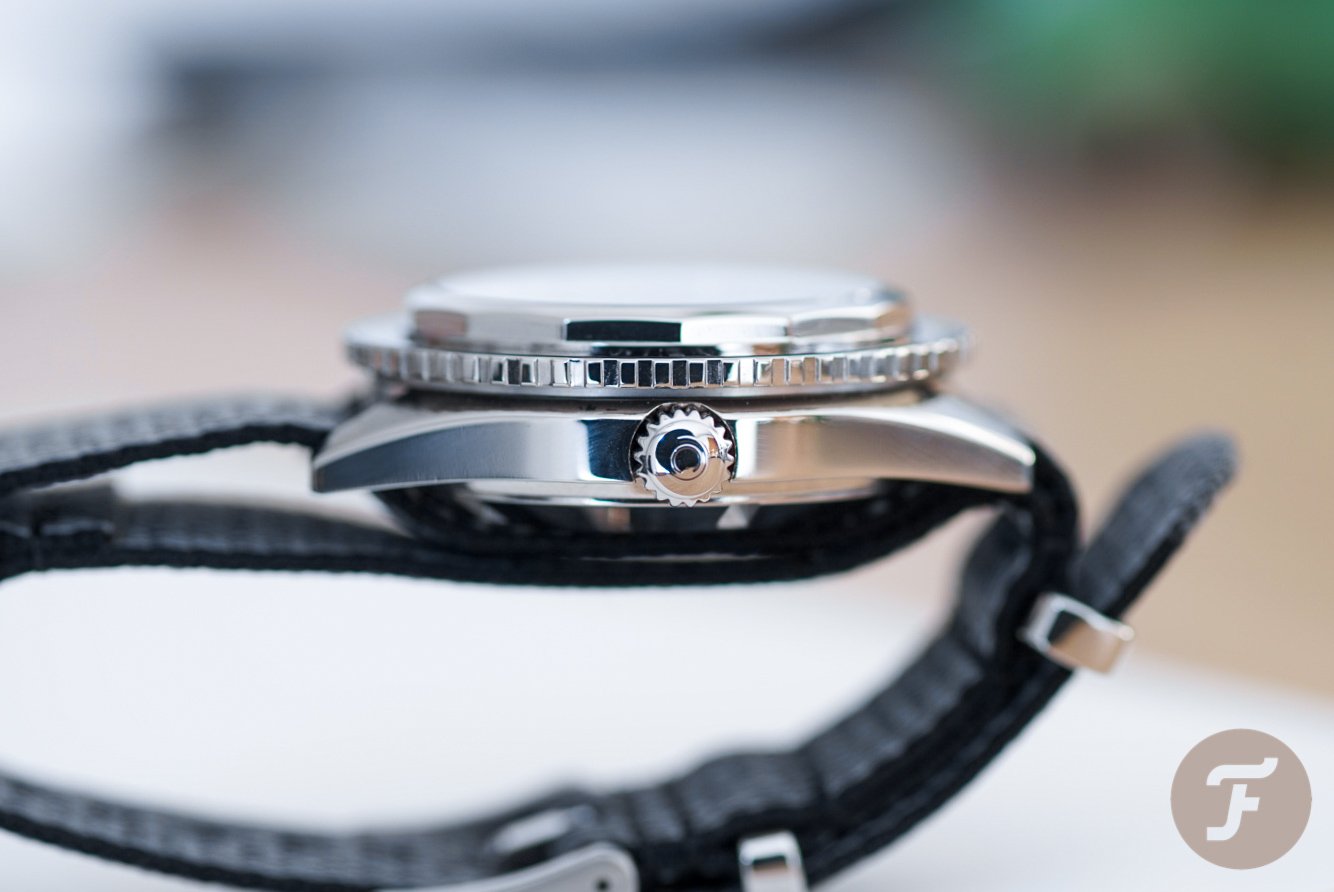 Furthermore, its thickness is 15mm, not to mention that it feels even thicker thanks to the double layer NATO strap. The watch is sitting on your wrist pretty high, so if you have a smaller wrist, you might want to try it on at a shop before ordering online. Still, aside from its size, the watch feels great on the wrist. Yes, it’s not a light piece; yes, it has a sporty look. And boy, is it fun to wear! 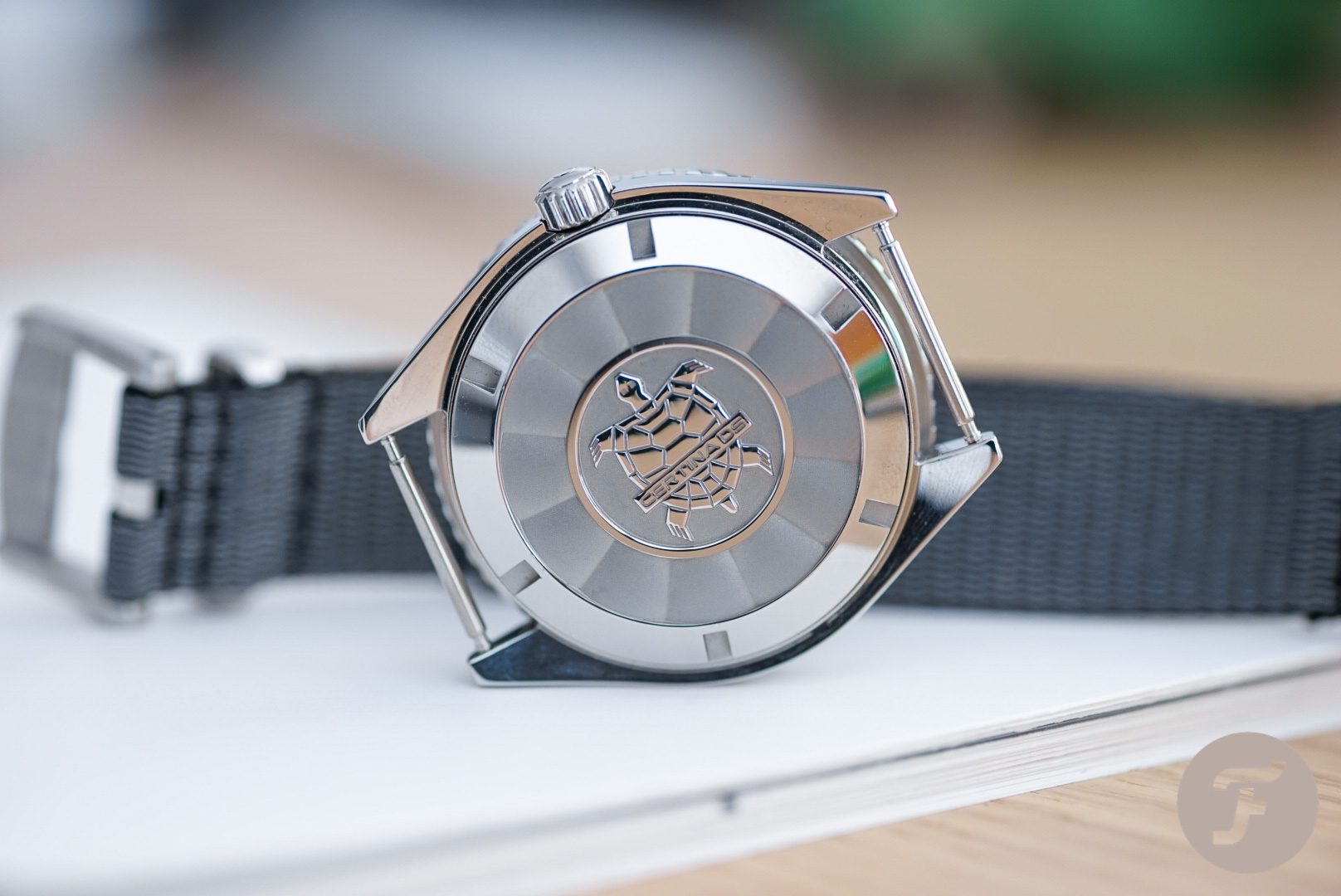 Isn’t that what we should expect from a timepiece that could go 500m beneath the waves? I put the watch on as soon as I received it, and I loved how it looked on my 7.5″ wrist. Yet, I developed a strange feeling. I felt like I’d worn this watch before. Obviously, this was impossible, yet I knew that this Certina reminded me of another timepiece. Then suddenly, I realized: at first glance, the PH500M looks and feels like the 42mm Omega PO. Granted, I do not think Certina copied that design: the brand used its vintage model as inspiration. Aside from the colors, there weren’t many common denominators between the two models. Yet, the feeling that the PO gave me back in the day when I first strapped it on was the same that now came back with the Certina. 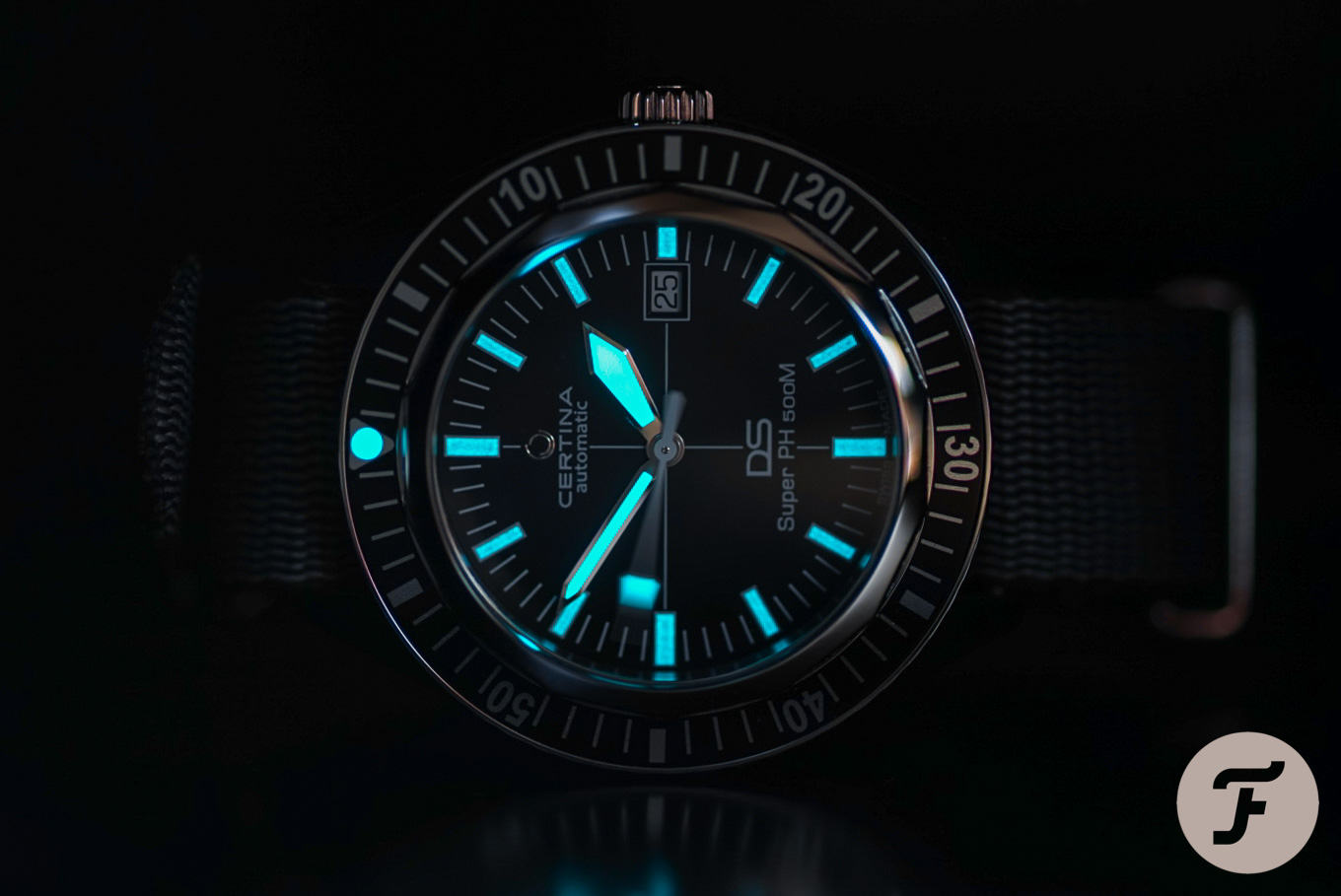 Wearability is just as important as usability when talking about a tool watch. The Certina Ds Super PH500M does not cease to amaze us on that front either. Due to the black/white color contrast, it is easily legible. The large, Super-LumiNova-coated hands and indexes are easy to read. The hands have the same shape as the vintage source material: the overall look is pretty similar. Perhaps the bezel is a bit thinner on the new watch allowing the dial to be a tad larger. The security lock reassures the wearer that it won’t accidentally turn once the unidirectional bezel is set to the correct position. The same feature was part of the vintage PH500M as well. Another design element Certina took was the relatively short lugs. As the case is big enough, the lugs are somewhat chunky. 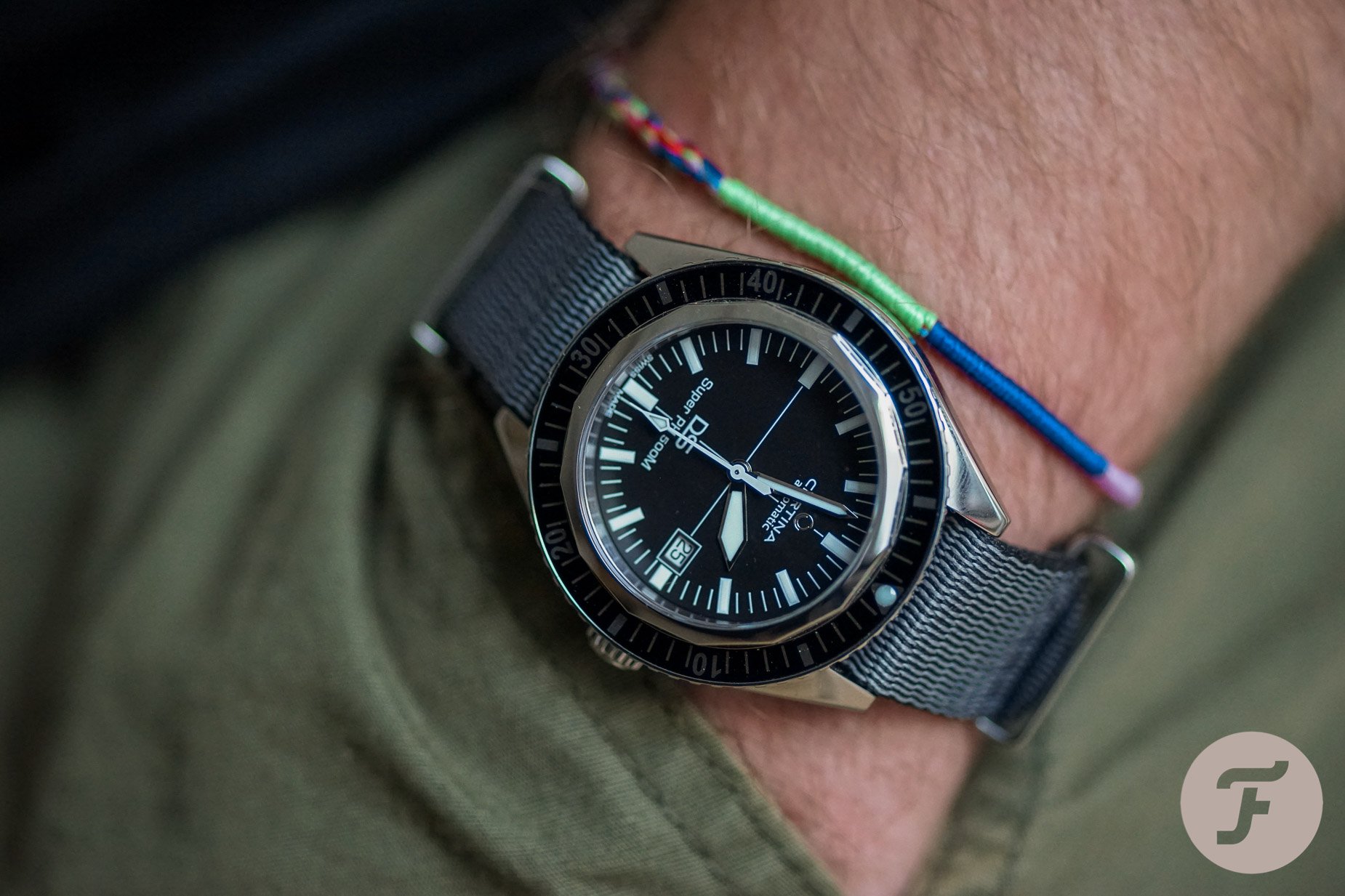 The simplicity that characterizes the watch applies to front and back. If we remove the NATO strap, the classic Certina turtle logo appears on the case back. There is no text around it, no mention of the water-resistance (you can see that on the dial), or the movement type (that’s on the dial too). It is just a clean and straightforward back with the turtle and Certina DS on it. In case you do not know, DS stands for double security and refers to the company’s system on many watches. It is an age-old invention that is a rubber ring between the case and the movement, protecting it from any impact. Inside, the case beats the Powermatic 80.611 caliber. The movement offers 80 hours of power reserve and an anti-magnetic Nivachron balance spring that promises better accuracy for the DS Super PH500M. 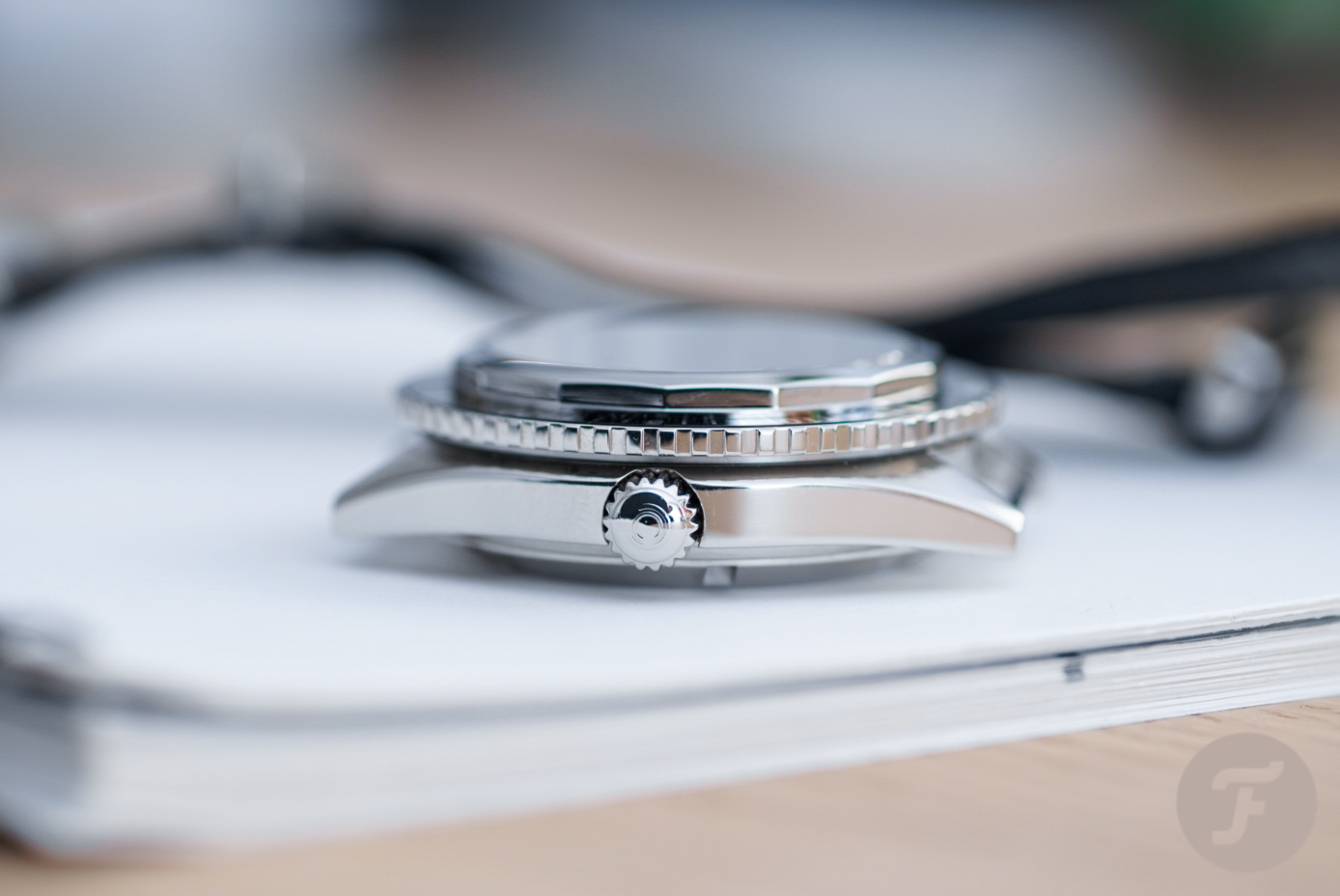 While the VDST version comes on a rubber strap, this 2021 DS Super PH500M received a special NATO strap. The #tide ocean material is a unique textile created of recycled plastic waste fished out from the sea. I felt the strap was a bit on the short side for me, but I don’t mind that. I usually swap straps regularly, and I’m sure many of you do too. Lastly, we need to talk about the price. If the technical details, the materials, or the look is not enough to persuade you that what we have here is exceptional, maybe the price will. For the new Certina DS Super PH500M, you have to pay €860 (€895 for the VDST version). It’s safe to say that you are getting a lot of watch for your money. Don’t believe me? Go and try one on. You won’t regret it.