It seems that Certina can’t put a foot wrong when it comes to diving watches. If you want a mechanical, Swiss made, budget diver, chances are Certina has something for you. Recently, another fine example — the Certina DS Super PH500M — landed on my desk. The story of this watch is like a movie that takes us from the Caribbean Sea to Germany.

Along our journey, we’ll meet NASA engineers and aquanauts. We’ll also spend some time in futuristic underwater habitats and learn about the visibility of colors underwater. Are you ready? Let’s dive in then (sorry for the pun).

The Certina DS Super PH500M takes inspiration from one of the brand’s legendary vintage divers. The grandfather of this model was the Certina DS-2 Super PH500M. It was the top-of-the-line diver back in the late 60s with water resistance up to 500m. That watch was 43mm wide, had a black dial with orange indices, and used Certina’s workhorse caliber 25-651. For security, the diving bezel had a locking system; you could only rotate it once you pushed it down.

Most notably, the DS-2 Super PH500M (ref. 5801 123) was the one aquanauts used during the Tektite experiment in 1968. More precisely, the first one, as there were many during the late ’60s and early ’70s. Our friend over at Vintage Certinas covered this topic excessively. Here’s the link. If you don’t want to click away, let me give you the story in a nutshell… 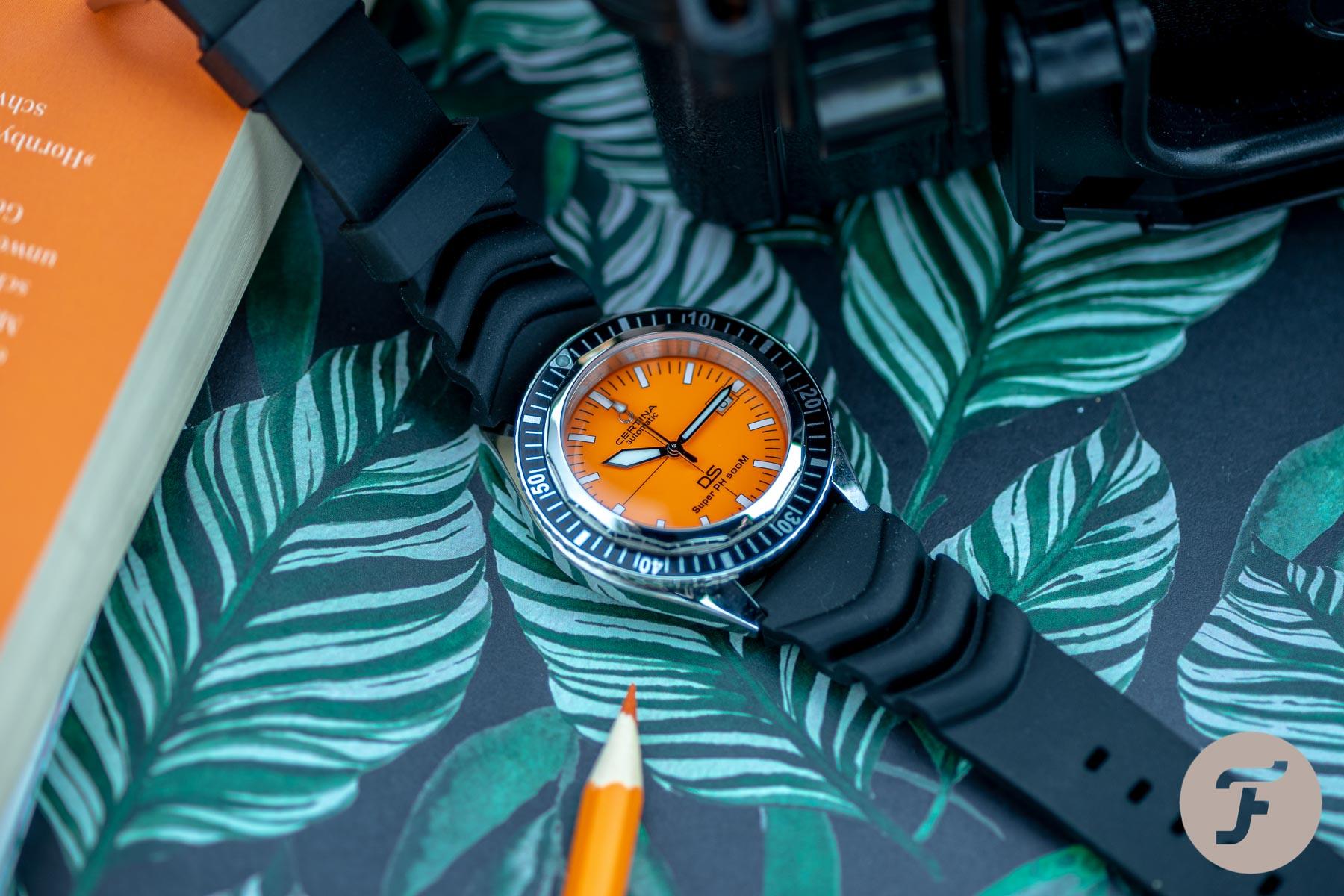 Tektite I was a federal underwater experiment between February and April of 1969 on one of the US Virgin Islands. In this experiment, governmental organizations such as the US Navy, NASA, and the American Department of Interior teamed up with General Electric from the private sector. GE built a habitat that was then placed 15m below sea level. Four scientists occupied this habitat for the duration of 60 days.

The goal was to examine the behavior of the four scientists under hostile conditions. Furthermore, the aquanauts also conducted research underwater and took part in daily dives. A handful of watch brands provided timepieces for this experiment. One of those companies was Certina with the DS-2 Super PH500M. Certina’s new DS Super PH500M takes inspiration from that legendary diver. For the first time in collaboration with a different — diving — company. 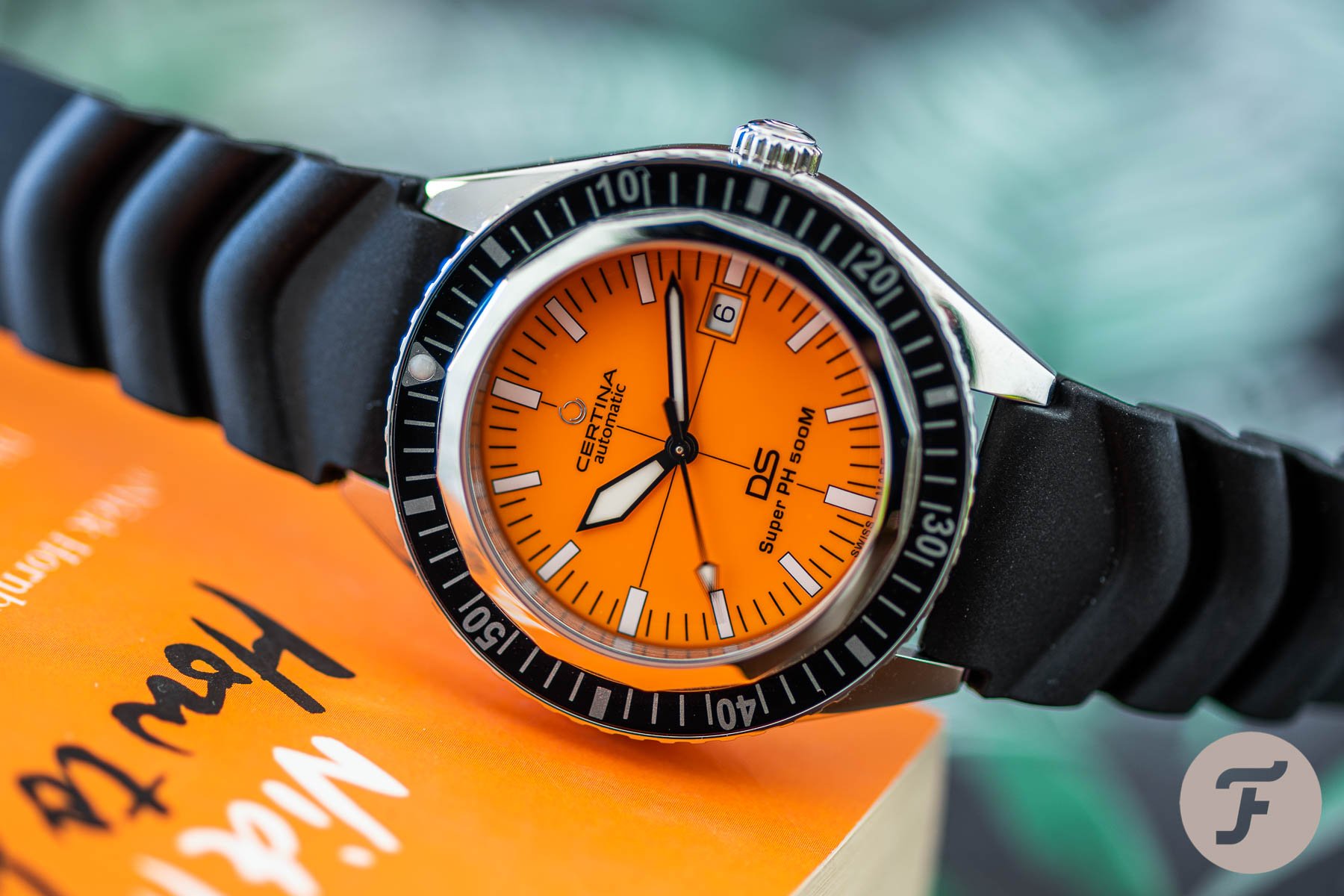 The vintage DS-2 Super PH500M was not the result of a collaboration between Tektite and Certina. The watch was already in production when the project started. Nevertheless, Certina provided the watches for some Tektite team members for testing purposes. That said, this new DS Super PH500M diver is indeed the fruit of a partnership.

Certina teamed up with VDST (Association of German Sports Divers) to create a mechanical watch for them, and the inspiration came from the Tektite watch. Most notably, the obvious external features such as the size (43mm), the hands, and the diving bezel with a security lock. Yet, if we place the vintage and the new DS Super PH500M next to each other, there is one obvious feature that helps us tell them apart from each other. Yes, that is the dial color, black on the vintage model but bright orange on the new watch. 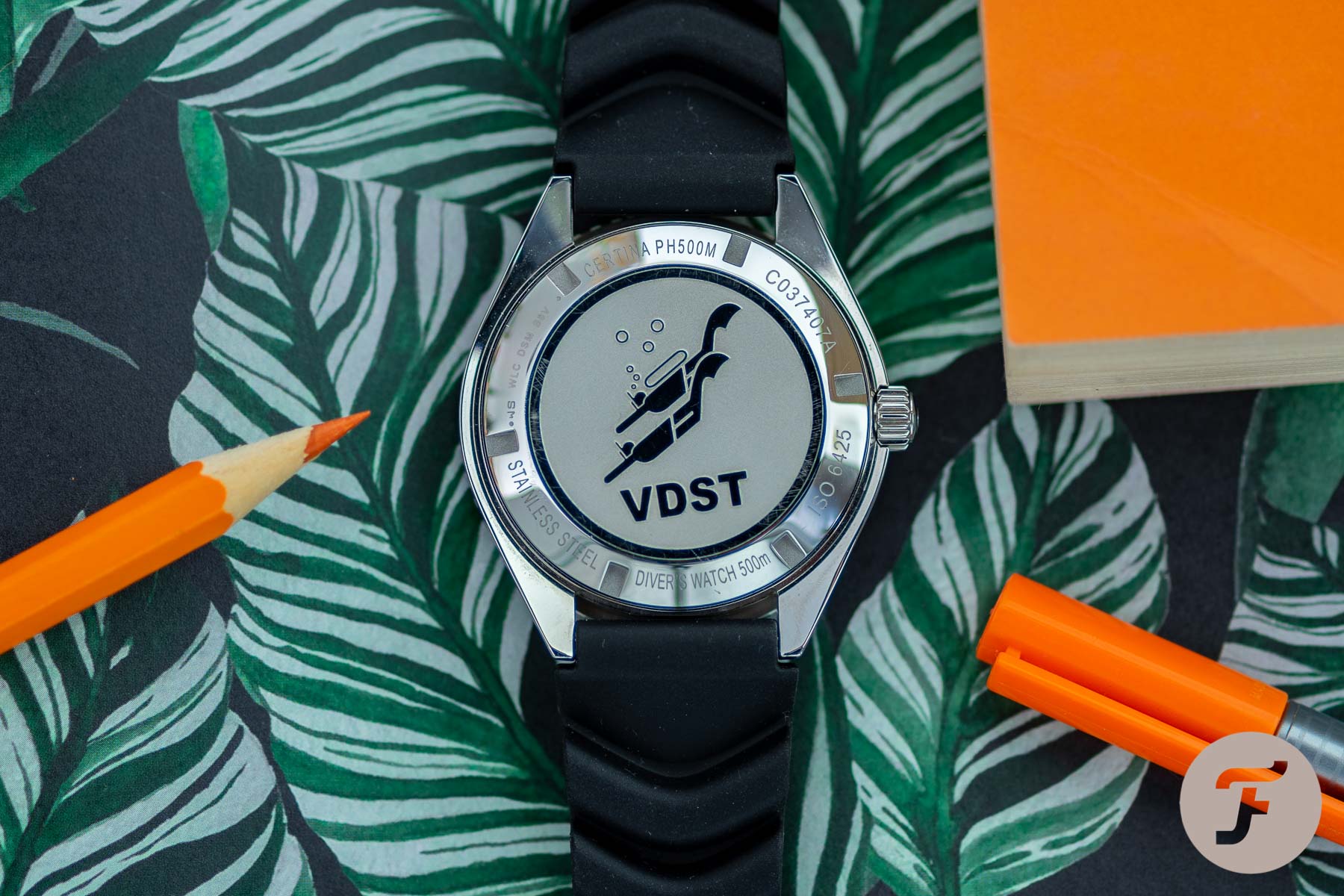 Orange is the new black.

Now, let’s address the elephant in the room; using the color orange for the dial is not Certina’s invention. We all know the story about the first-ever dive watch with an orange dial. Since the release of that model in 1967, numerous watch manufacturers have used this color for their divers. Certina is not copying this prestigious brand, either. We have scientific proof that orange is the most visible color in (murky) waters.

During the late 1960s, quite a few entities tested this in Europe and the US, and the results were always conclusive. The new DS Super PH500M received a bright orange dial and white indexes with Super-LumiNova coating. Like the vintage model, the new Certina also has a date aperture at the 3 o’clock position. Lastly, the hands are the same shape as before. Albeit this time, they are all black, again, with Super-LumiNova. 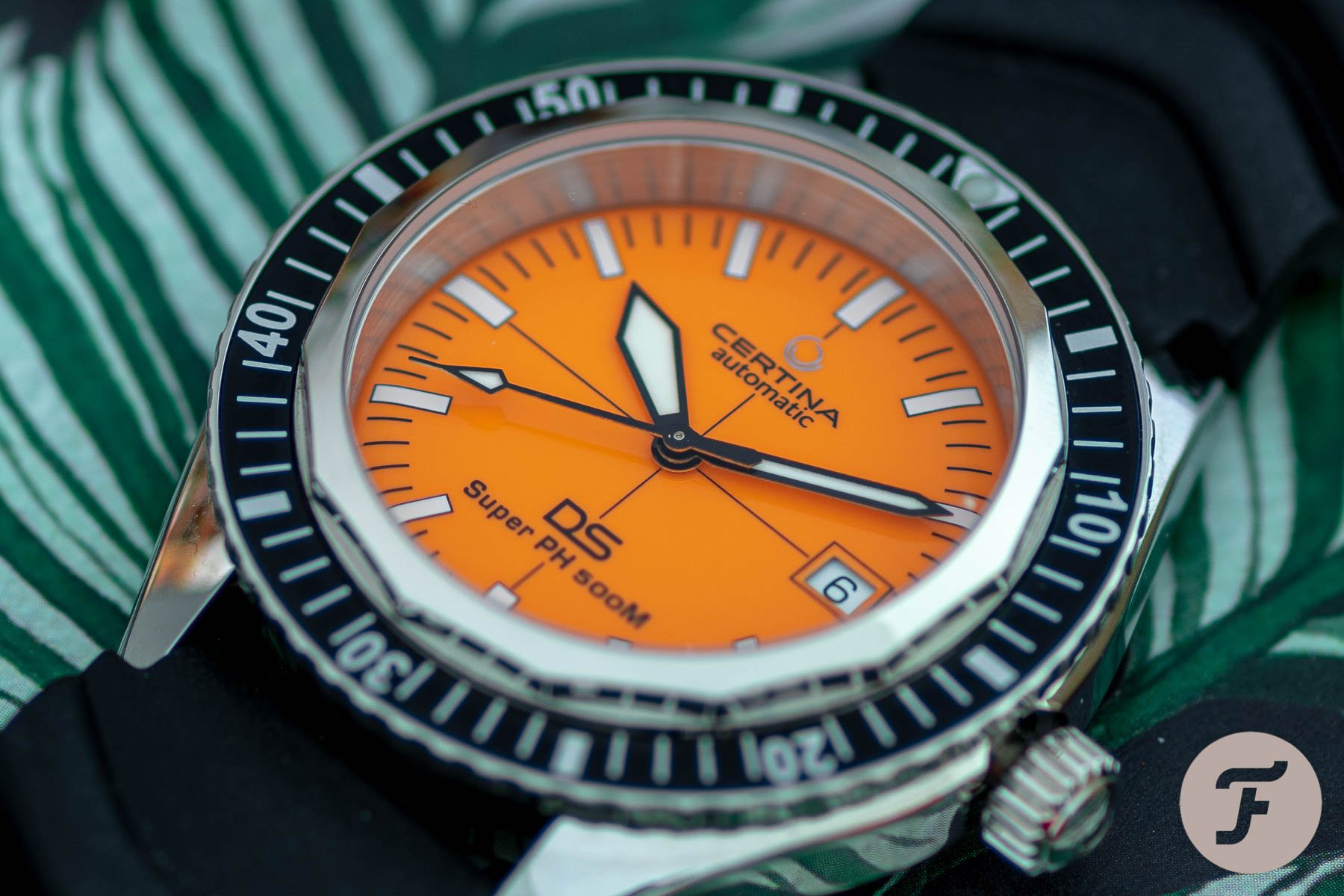 While the dial of the new DS Super PH500M only takes inspiration from the predecessor, the case is closer to the original. If we take a look at the size, we can see that both watches are 43mm wide. The vintage Certina was a bit thicker at 16.5mm; the new version is only 15mm. The lug-to-lug length is 48.1mm. We can agree that the new DS Super PH50M is a fairly large watch but not unusual. Aside from the similar size, the bezel also mimics the original. We have a 60-click unidirectional diving bezel with a security lock.  This prevents the bezel from turning unless the diver first presses it down. As you would have with divers, the Certina comes on a large screw-down crown. Lastly, the back is solid steel and sports the VDST logo in the middle. 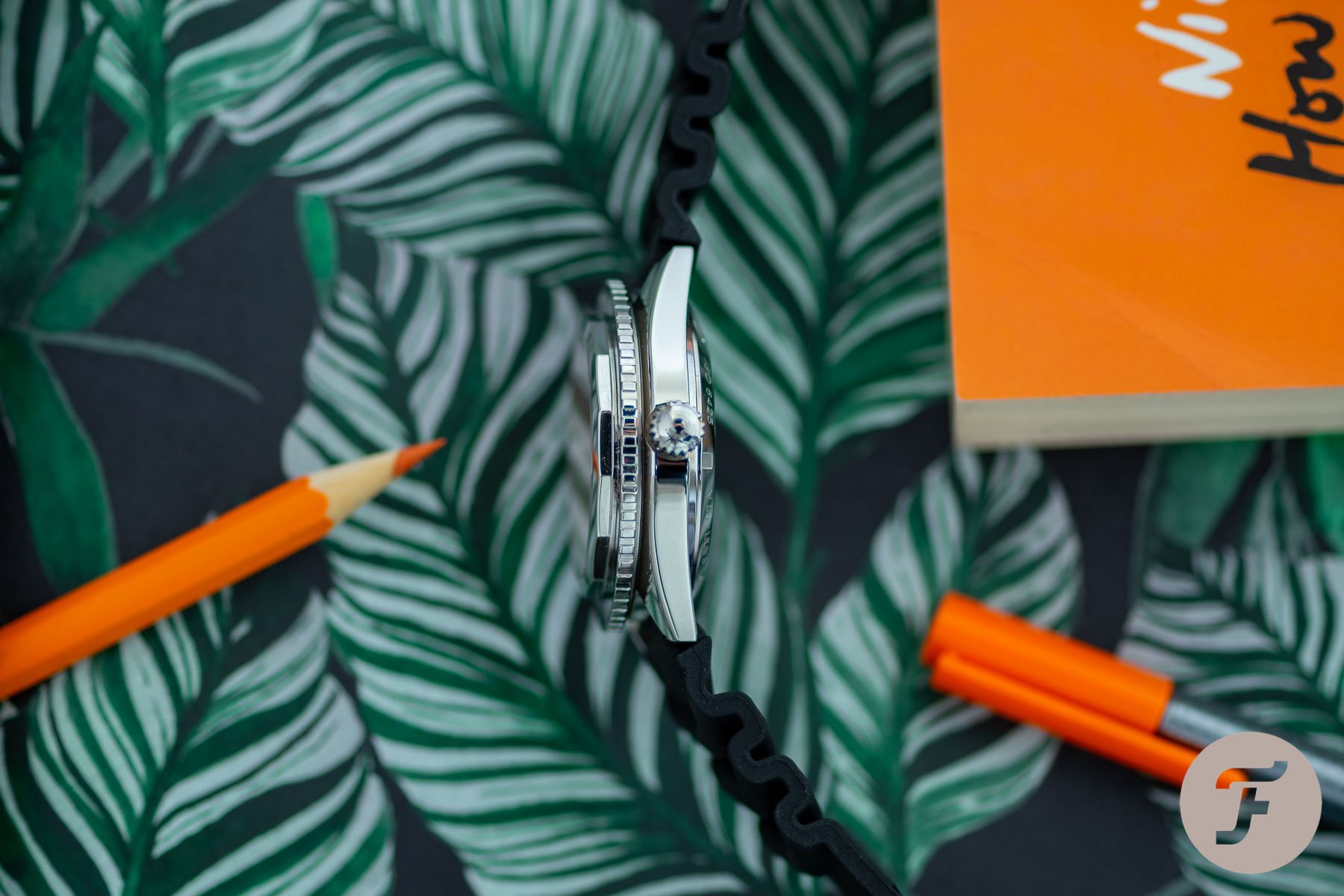 Just like the case of the vintage Certina PH500M, the new version also received a trusted caliber. Both watches had movements that were mechanical, automatic with a date feature. We mentioned the vintage caliber above, so let’s look at the new one. Inside the new Certina DS Super PH500M is ETA Powermatic 80.611 with Nivachron balance spring. The most prominent feature of the Powermatic is its 80 hours of power reserve.

Otherwise, it is a very well-built machine, just like the 25-651 was in the vintage DS-2 Super PH500M. As its name suggests, the new watch also has the legendary Certina DS system inside the case. This quasi-suspension is a thick, rubber o-ring that is placed between the movement and the case. The DS ring protects the movement from impacts better than a plastic or metal spacer. 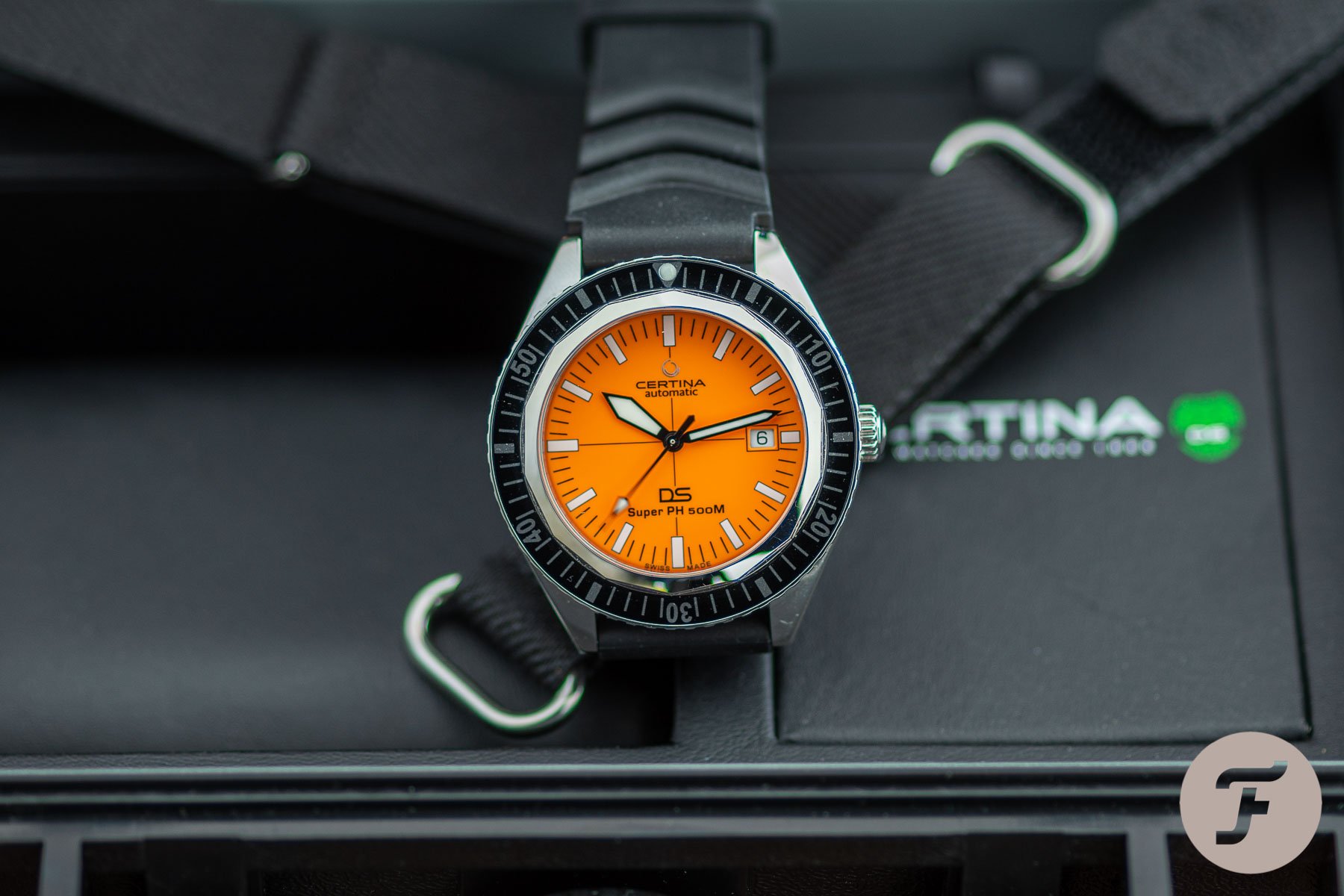 The new Certina DS Super PH500M has ISO6425 Diver’s watch certification. What we need to talk about is the price. The German retail price is €872. For this amount, you have quite the package. The watch comes in a plastic transport box with a rubber diving extension.  VDST members also get the DS Super PH500M with two extra nato straps. If you’re on the market for a new dive watch, this one is certainly worth considering. If you’d like to visit Certina’s website to order one for yourself, click here.