Hamilton, part of the Swatch Group, is making waves in the industry for quite some time now.

To start with, they appear on movies probably as often as Omega does. This might sound like a bold statement from me, and it is absolutely not backed by any data from the brand. Though if you think if some of the bigger box-office movies of the last 10 years or so Hamilton was part of many of them. Think of the Men In Black franchise for example, or Interstellar. But also in Ocean’s Eleven, The Commuter, The Shape Of Water, The Italian Job, Quantum of Solace, The Terminal, the list goes on and on. What Hamilton is also great at, is coming out of re-editions that are just superb. Like the Hamilton Intra-Matic Auto Chrono. This time with a beautiful blue and (off-)white panda dial. 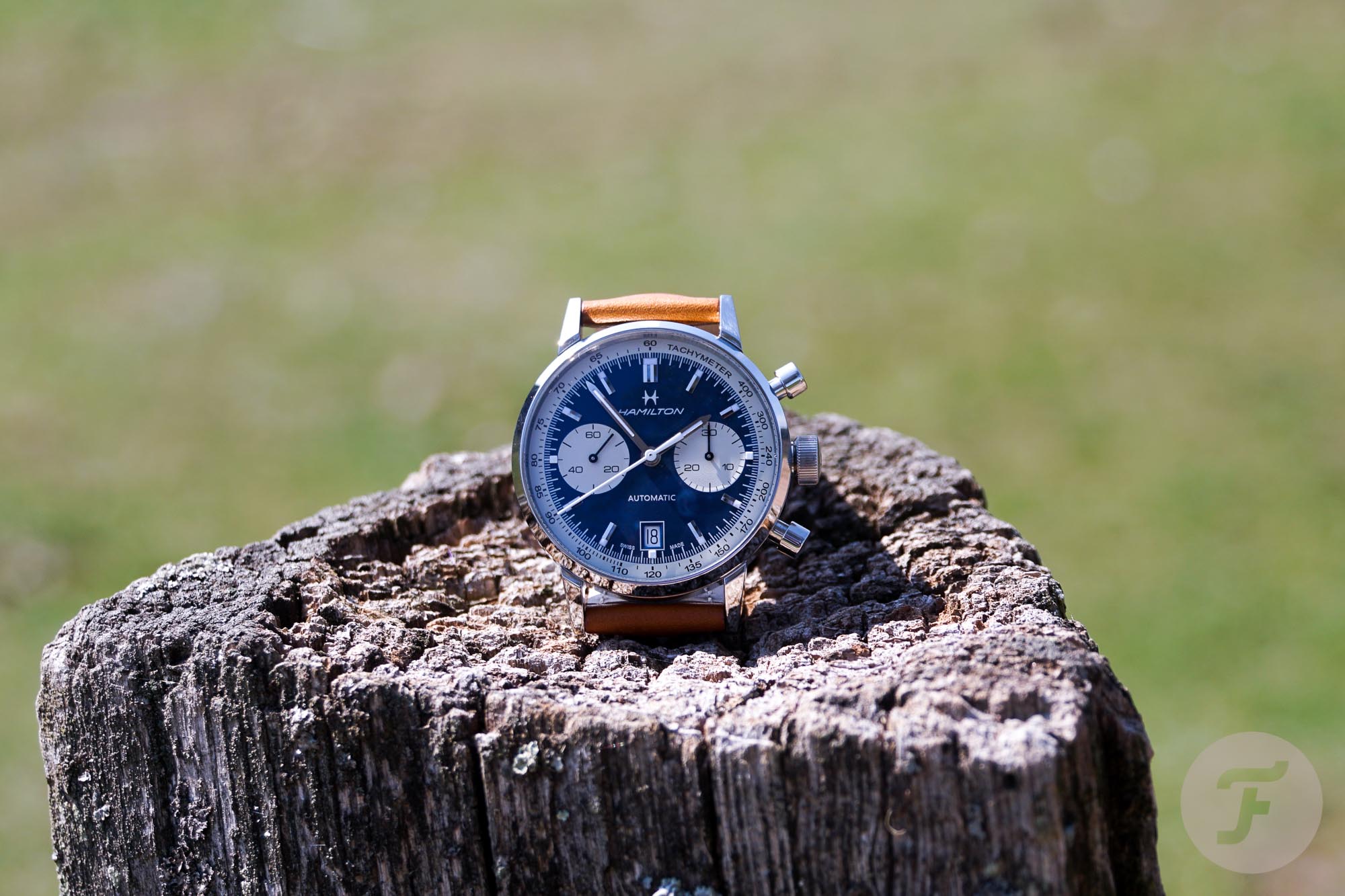 It was 2017 when Hamilton released their first Intra-Matic Auto Chrono with a reverse panda dial. The design is based on their model from 1968 hence the name of that watch; Hamilton Intra-Matic 68 Auto Chrono. While some said that the watch is too large or that the date at 6 is killing the vintage vibe, the watch community loved the piece. Even though there might be some truth in those naysayers’ comments, the first Intra-Matic 68 was a nice reverse panda chrono for a very competitive price point. We also covered the watch in our Baselworld 2017 article. Then, a year later the panda version came out. Same watch, same size, and movement but this time with a white dial and black subdials. We went hands-on with that piece last August. Finally, this year the Hamilton Intra-Matic family expanded with the addition of a 3rd version in blue. 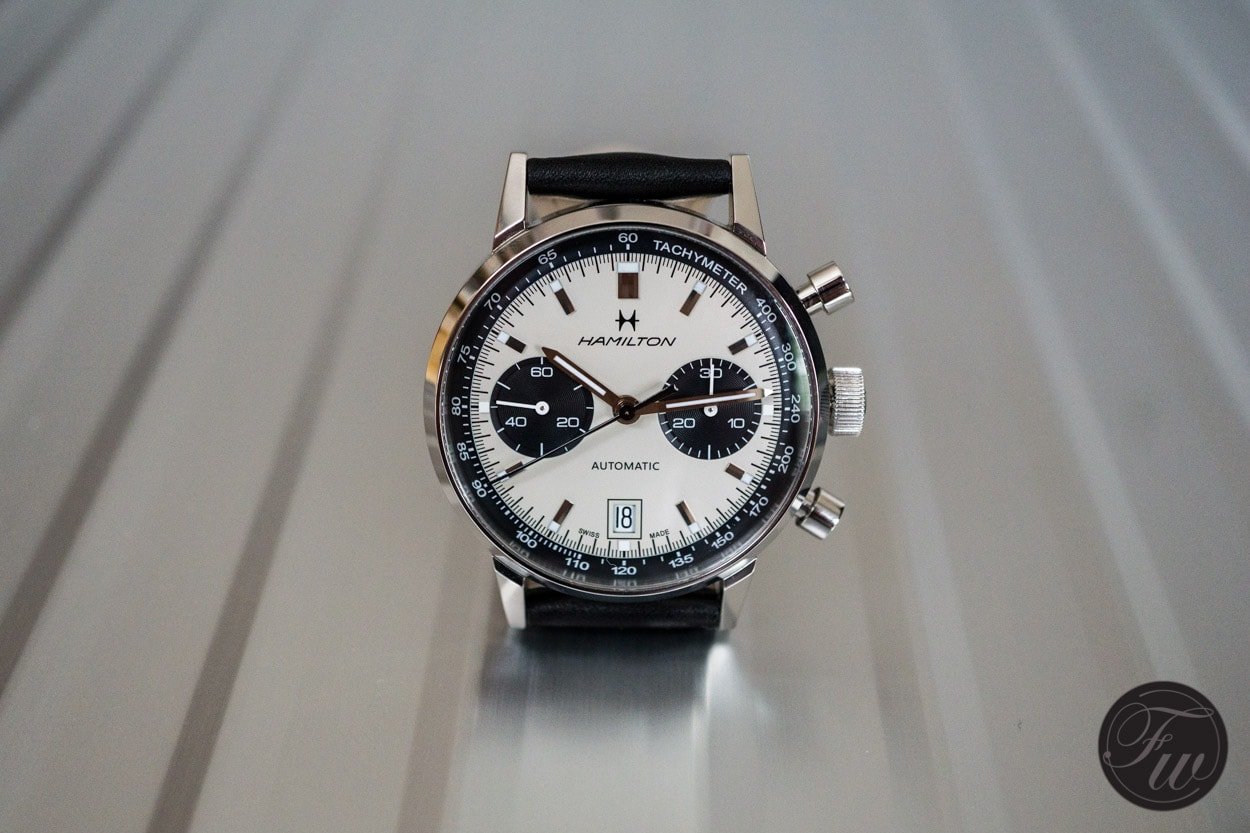 Hamilton’s Intra-Matic Auto Chrono from 2018 with already smaller (40mm) case than the initial release, the Intra-Matic 68 (below) with a 42mm case 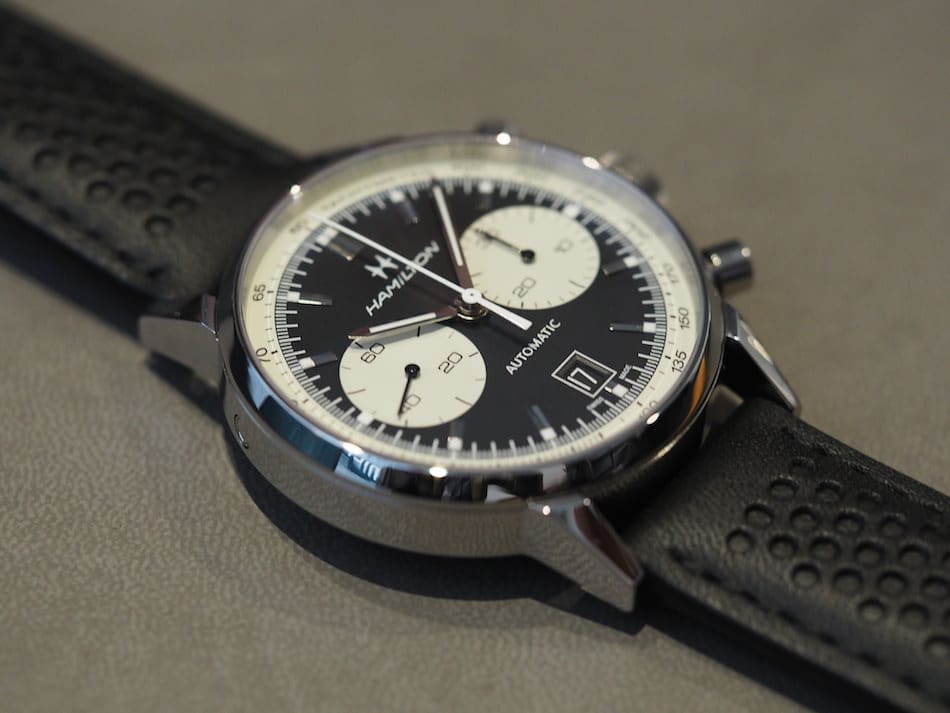 Blue is the new black

After the release of the initial black dial watch, Hamilton did not market their models as Intra-Matic 68 anymore. Both the white panda watch and this new model are “only” Hamilton Intra-Matic Auto Chronos. So, while the name is not new the dial color is. And boy is that a nice watch or what? The new blue Intra-Matic is technically the same as the previous version aside from the dial. If you are a vintage guy you have probably seen this blue on old Hamilton models, such as this one. While the color is not identical it is very similar. It gives an extra dose of vintage feel to the new Intra-Matic Auto Chrono. Especially with the caramel brown leather strap, it comes with. For some reason, leather strap seems to be the week points of Swatch Group brands, but I have to say, this one is pretty spot on. 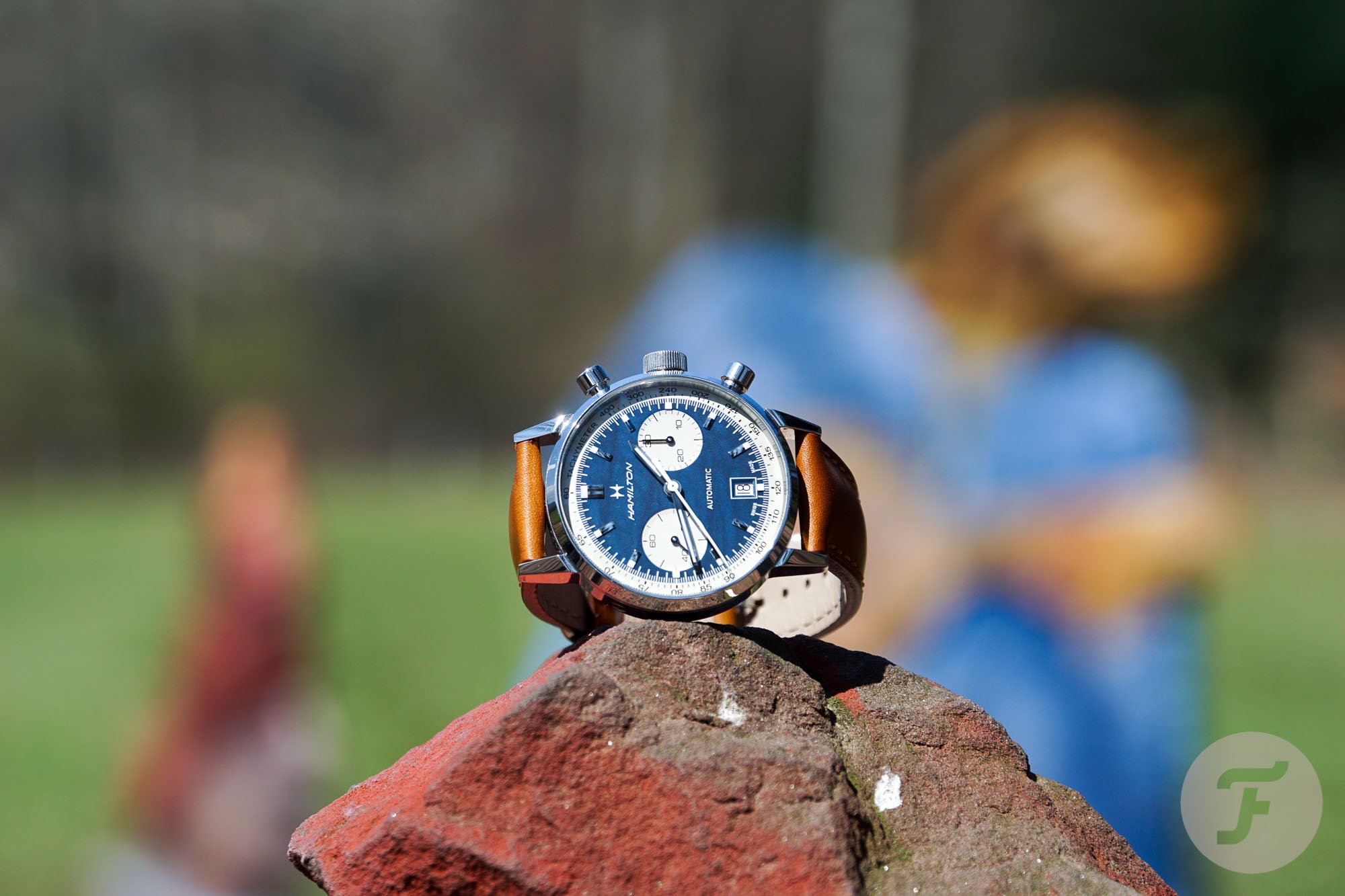 All 3 models have the same caliber inside, the Hamilton H-31. As you’d have it with most affordable brands, the movement inside is not in-house but one from the Swatch Group movement mogul; ETA. It is the 7753, an automatic 27-jewel chronograph caliber with 60 hours of power reserve and 28,800 vph. The 775X ETA line is somewhat legendary these days. Their base 7750 movement is an industry favorite just like the 7754 with the extra GMT function. The 7753 is the so-called “smiley” version where the sub dials are the 3-6-9. For the Intra-Matic the 12-hour subdial at 6 is not in use, making it a two sub-dial chronograph. It’s a trusty movement that does its job. As the previous versions all had it, as well as many other brands, there isn’t too much new on this front I can report on.

The major difference between the Hamilton Intra-Matic 68 (reverse panda from 2017) and the 2 newer Intra-Matic Auto Chrono models (panda and blue dial from 2018 and 2019) is the size of the case. When the 68 came to the market the biggest complaint we heard was its size. The original model from 1968 was 36mm, a standard size at the time. The new 68 model was 42mm which many found too large, and I agree. Hamilton listened to the consumers – still a rare thing these days in the watch industry – and shrunk the size of their 2018 panda from 42mm to 40mm. It’s more contemporary I’d say. So, the new blue Hamilton Intra-Matic Auto Chrono also comes in 40mm. The size, the brown strap with the blue dial and the steel case creates a very pleasing combination. Something many will surely enjoy. 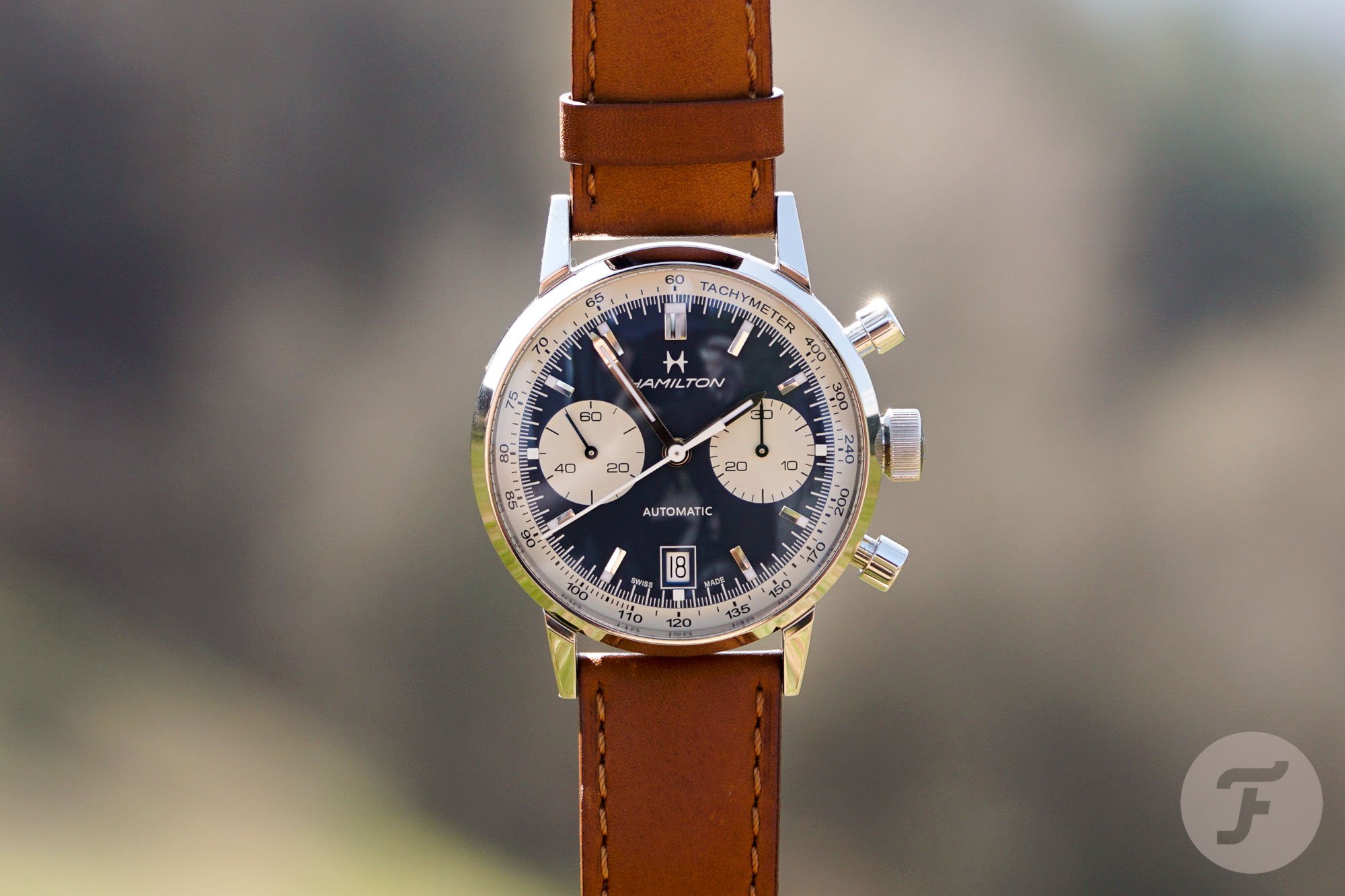 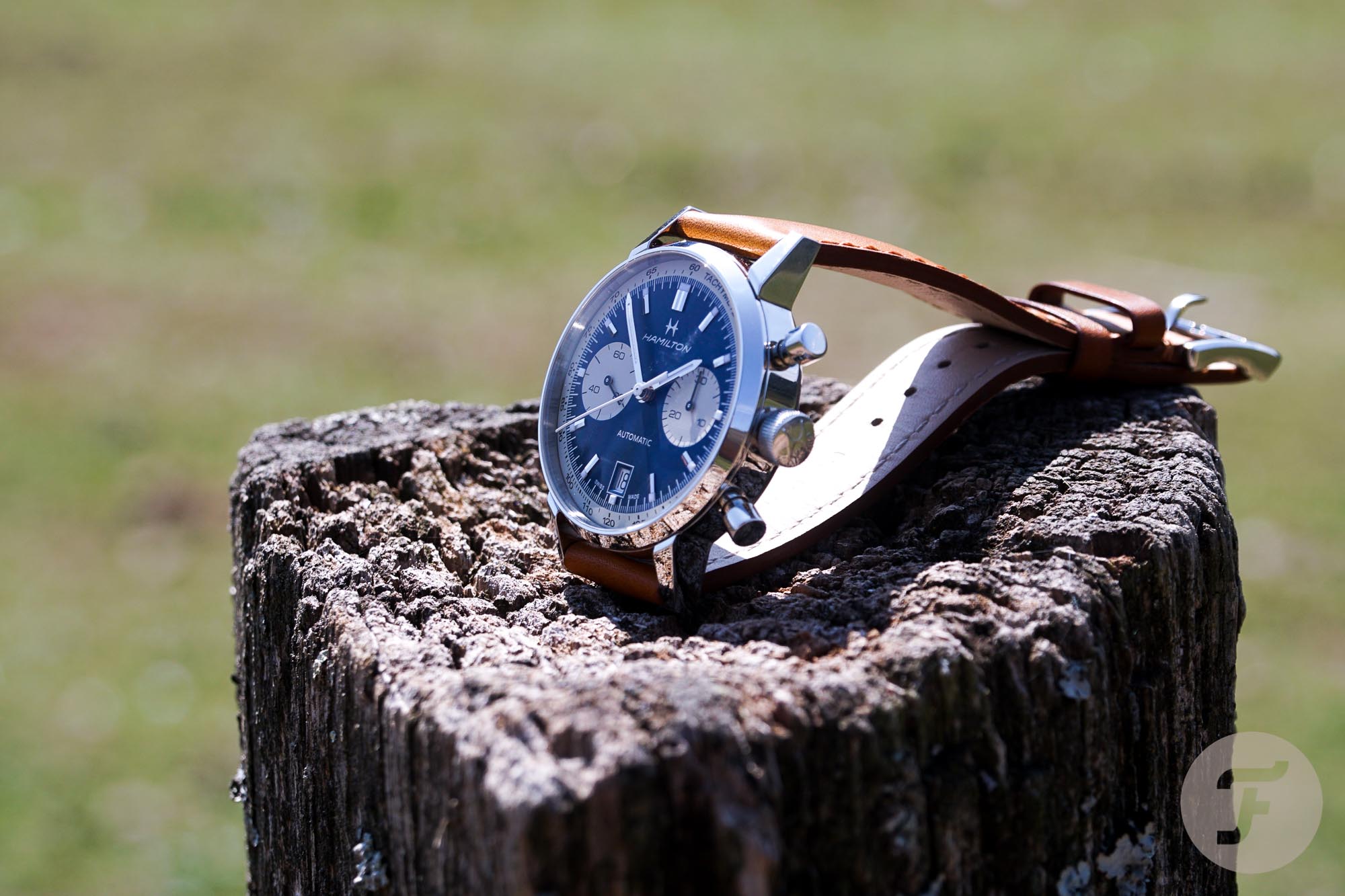 The new Hamilton Intra-Matic Auto Chrono is the best of the three so far, in my opinion. While I love all three of them for a different reason, I think the coolest of all in terms of looks is this one. The panda or the reverse panda might be more versatile but when it comes to wearability this new beautiful blue one has to take the prize. And while we are discussing prizes, or more precisely prices; the tag on the new blue Intra-Matic is set at 2,150 CHF (or €1,995). It’s a great price considering what you are getting for your money. Obviously, there is a huge competition in this price segment and while I like the watch this is my personal taste. I’d suggest anyone who is interested in it should go to a dealer and try it on. Trust me, it looks much better on the wrist than on photos. 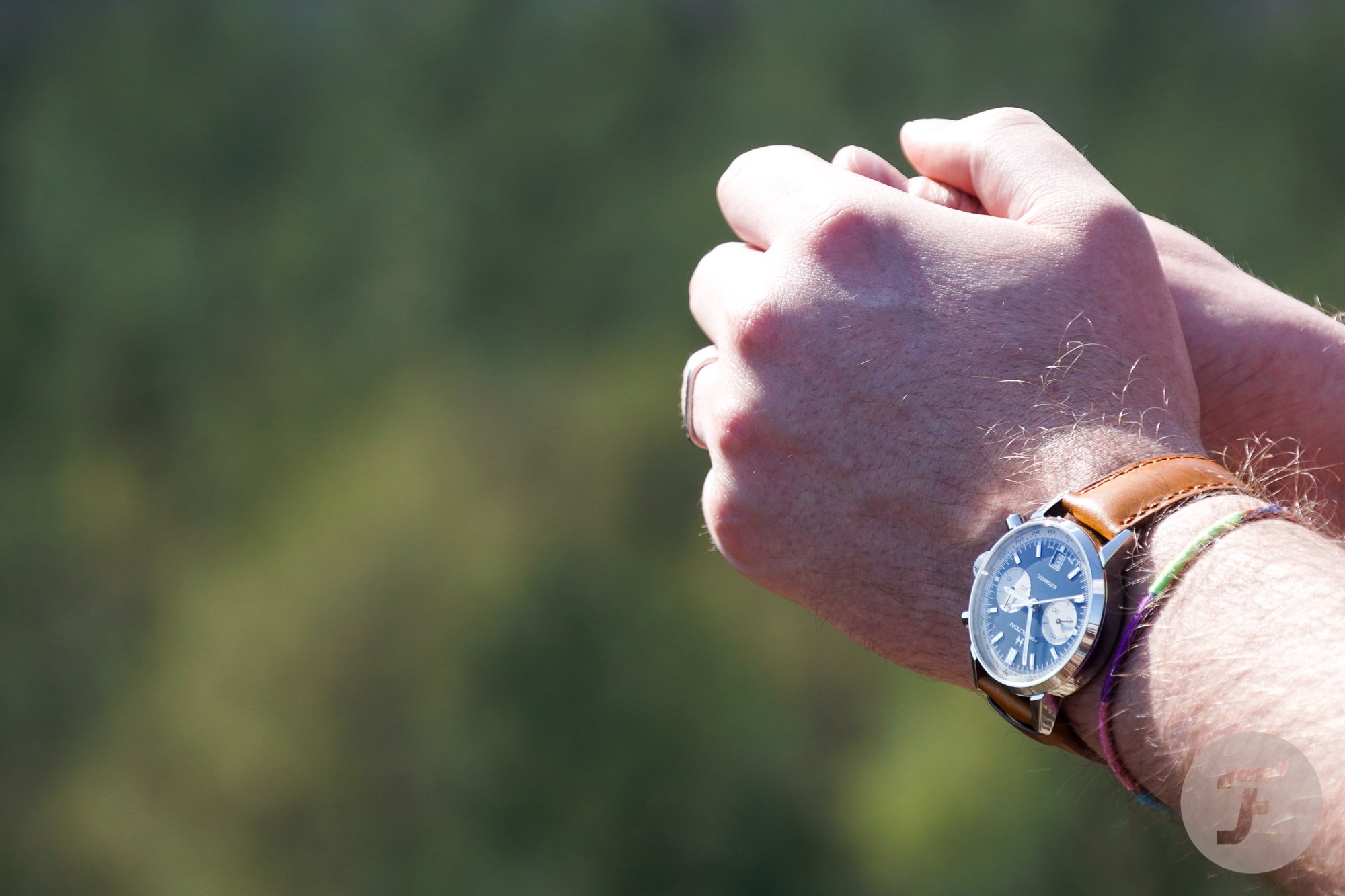 If you wish to visit Hamilton’s site, please click here.