Return Of The King: Seiko Brings Back The King Seiko Line In Its Regular Collection

But it is here to stay this time?
Dave Sergeant
comments 44
Share

One of my favorite film franchises was/is the Lord Of The Rings trilogy. Having never read the books, I was hooked and invested in the story as soon as I watched the first film. I always thought The Two Towers was an incredible film, and I doubted they could top it. However, the third and final piece of the puzzle, The Return Of The King, exceeded all expectations. What a film! Why is this relevant? Well, Seiko has heralded its own Return Of The King, bringing back King Seiko as a part of its permanent collection.

After a “trial-run” King Seiko reissue last year, Seiko finally seems to have bitten the bullet and gone all-in on bringing back the King Seiko name. As a brand with a rich and deep history to turn to for inspiration, the King Seiko line has long been one that Seiko collectors have wanted to be brought back to life. With the new King Seiko Collection dropping last week, Seiko has answered those calls in a rather handsome fashion. 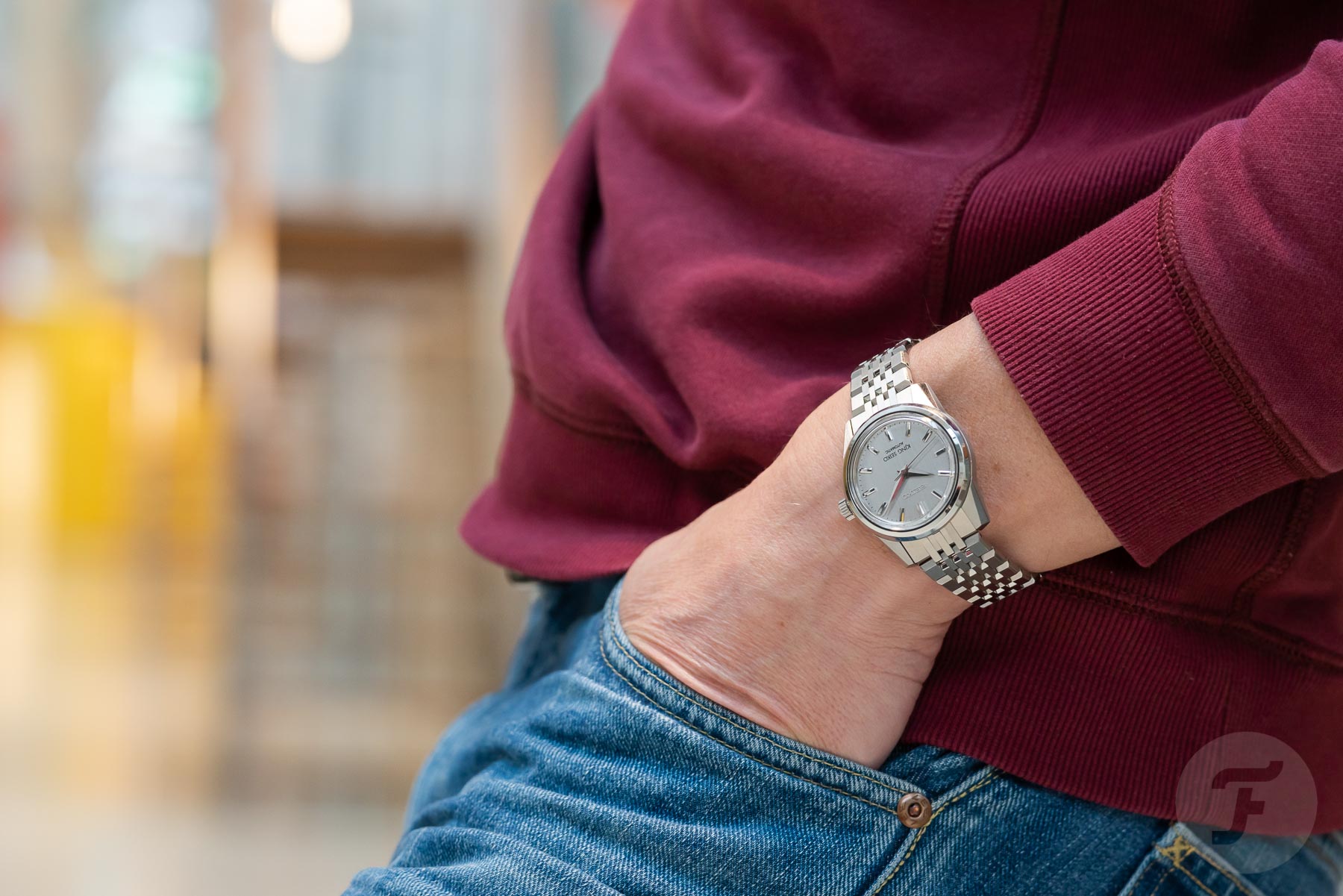 In the early 1960s, Seiko’s two sister factories, Daini Seikosha and Suwa were trying to create the best watches possible. That gave birth to two collections — King Seiko and Grand Seiko, respectively. Both collections exemplified the company’s ability to create beautifully designed, high-quality mechanical watches. Sadly, Seiko discontinued both collections in the mid-1970s, and only Grand Seiko saw the light of day again in 1988. King Seiko, on the other hand, slumbered on until recently. In 2021, Seiko announced the return of King Seiko with the SJE083. It was a 3,000-piece limited edition model to pay homage to those beautiful King Seiko watches from the 1960s. Now, Seiko has decided that it’s time to bring King Seiko back properly, and give the KS line a new lease on life. 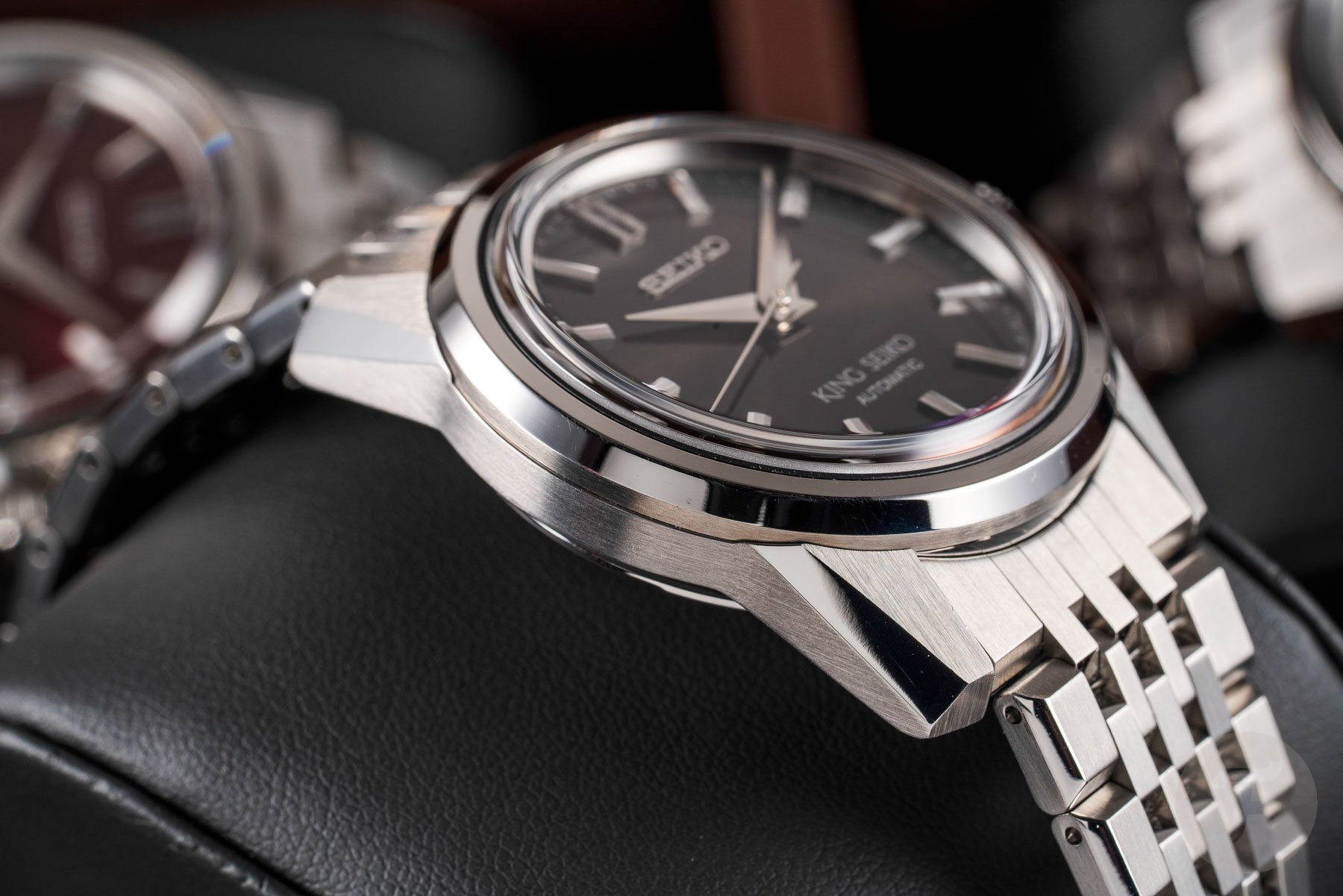 Like the SJE083, the new King Seiko collection is inspired by the 1965 KSK. The 1965 KSK was the second King Seiko watch, and it defined the design language of the King Seiko line. The collection comprises five new pieces, available starting in February 2022 at Seiko Boutiques and selected retailers worldwide. While the case may look the same as the SJE083 reissue, there are a few subtle changes, meaning it will wear slightly differently. Seiko decided to tweak the dimensions a little bit. The case diameter shrunk from 38.1mm down to a more vintage 37mm. It gained a little bit around the waistline, however, growing from 11.4mm to 12.1mm thick.

I’ve long believed that Grand Seiko and King Seiko had some of the best cases in the watch game, and I stand by that sentiment.

I never had the chance to try on the SJE083, but the new models are a perfect size, in my opinion. The case shape is the perfect reminder of why vintage King Seiko and Grand Seiko watches are desirable. The purposeful angles of the case combine with polished surfaces to create a beautiful visual experience. I’ve long believed that Grand Seiko and King Seiko had some of the best cases in the watch game, and I stand by that sentiment. Seeing the new King Seiko collection on the wrist only strengthened my stance. 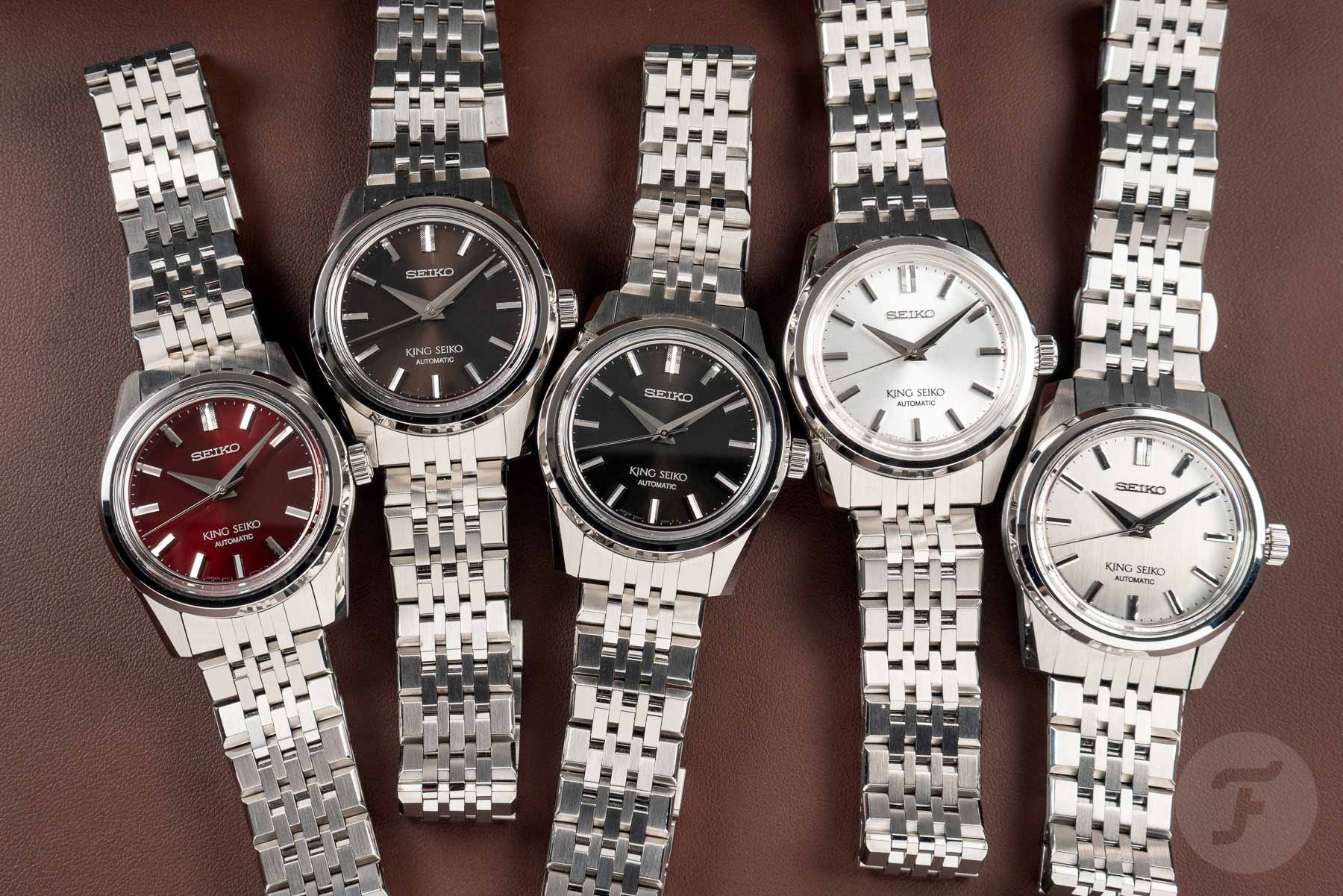 The five colors of the King Seiko

While each watch uses the same case, each reference offers a different dial. The original silver tone of the 1965 KSK remains as one option, and light gray, charcoal gray, brown, and red complete the collection. My favorite dial is the light gray option, thanks to the delicate vertical hairline finish. The other four dials have a superb vintage sunburst finish. The polished and folded dauphine hands play with the light wonderfully, as do the polished hour markers. The hour marker at 12 retains the same double-width textured design as the original 1965 KSK. When combined with the case, the light play is fantastic and pure. There’s no denying these watches stay true to the brand’s roots and philosophies of Taro Tanaka’s “Grammar of Design”. While there may be some “influences” of this in other Seiko collections, the King Seiko collection serves us pure Grammar of Design without having to go GS or vintage. 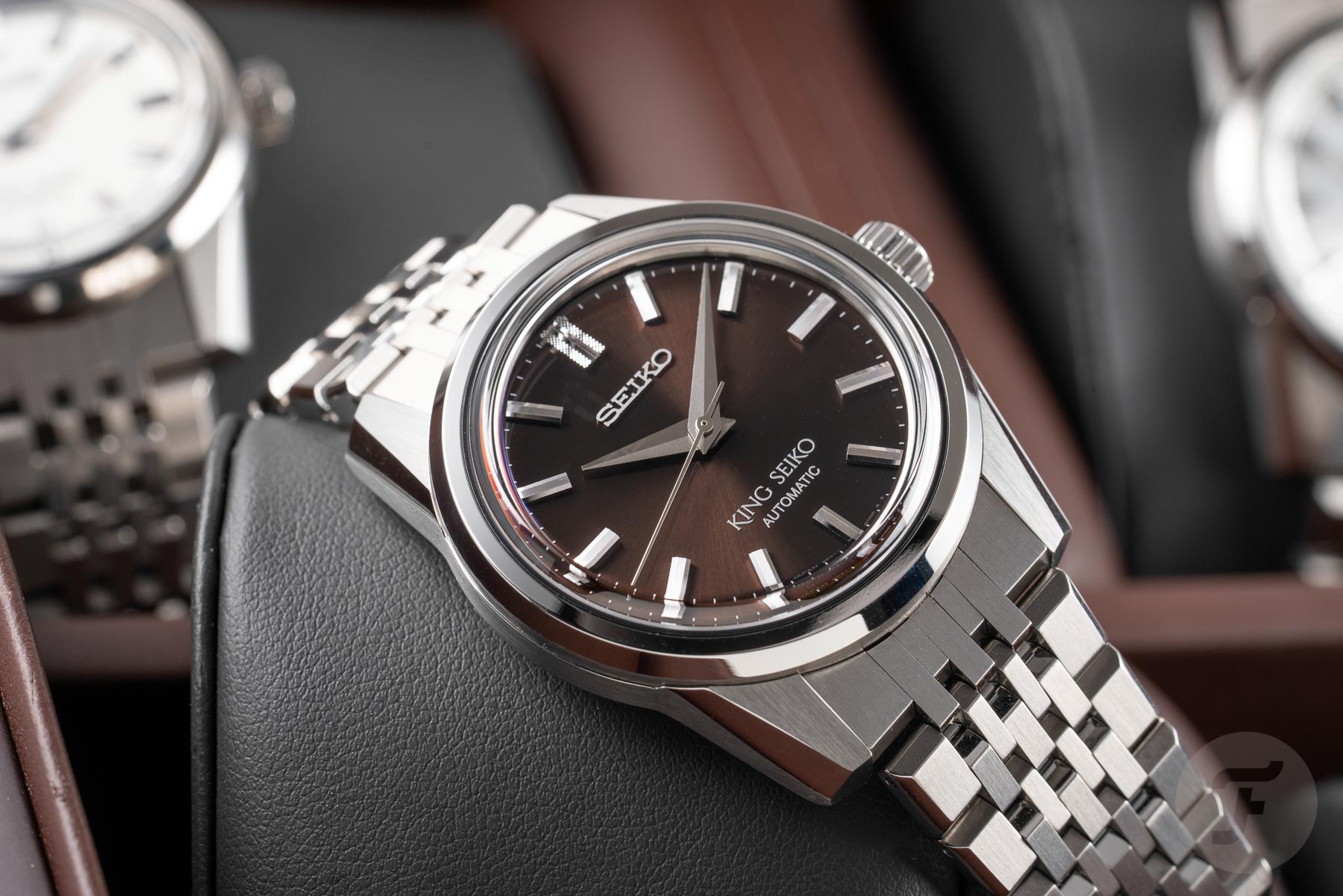 The dial layout remains pretty much identical, barring the date-free design. That’s courtesy of a different movement running the show on the inside, but more on that later. What is essential is that the omission of a date window creates a much cleaner dial layout, with the symmetry quite appealing. I think it’s a perfect example of addition through subtraction. I am usually a firm advocate for a date window. In this case, however, omitting it was a good choice. 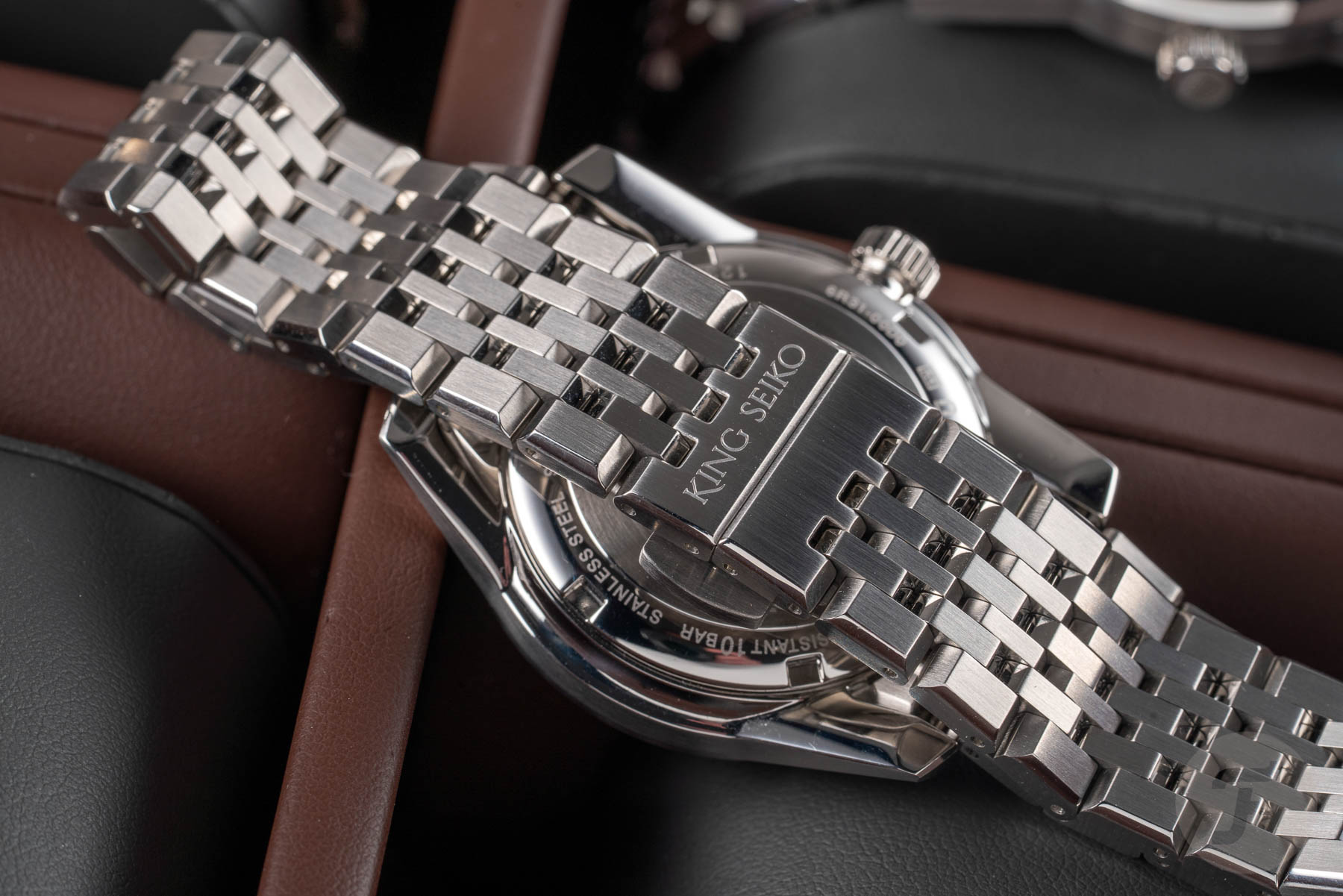 Now, I only had limited time with these watches before they went off to our photographer. Sure, I had the chance to try them on and have a quick look at the different dials. But I didn’t have a chance to do some of the more in-depth stuff like taking measurements. I was too busy enjoying these watches (and enjoy them I did!). The lug width of the new King Seiko collection is 19mm, which is wholly appropriate for a watch of this size. When I first saw the renders, it looked like there was no taper to the bracelet, which would have been a mistake. Thankfully the images deceived my eyes. It gently tapers in the first few links. I asked our photographer to measure the exact taper, but he’d misplaced his reading glasses, so we don’t have an exact figure. It appears to be down to around 17mm as an educated guess. 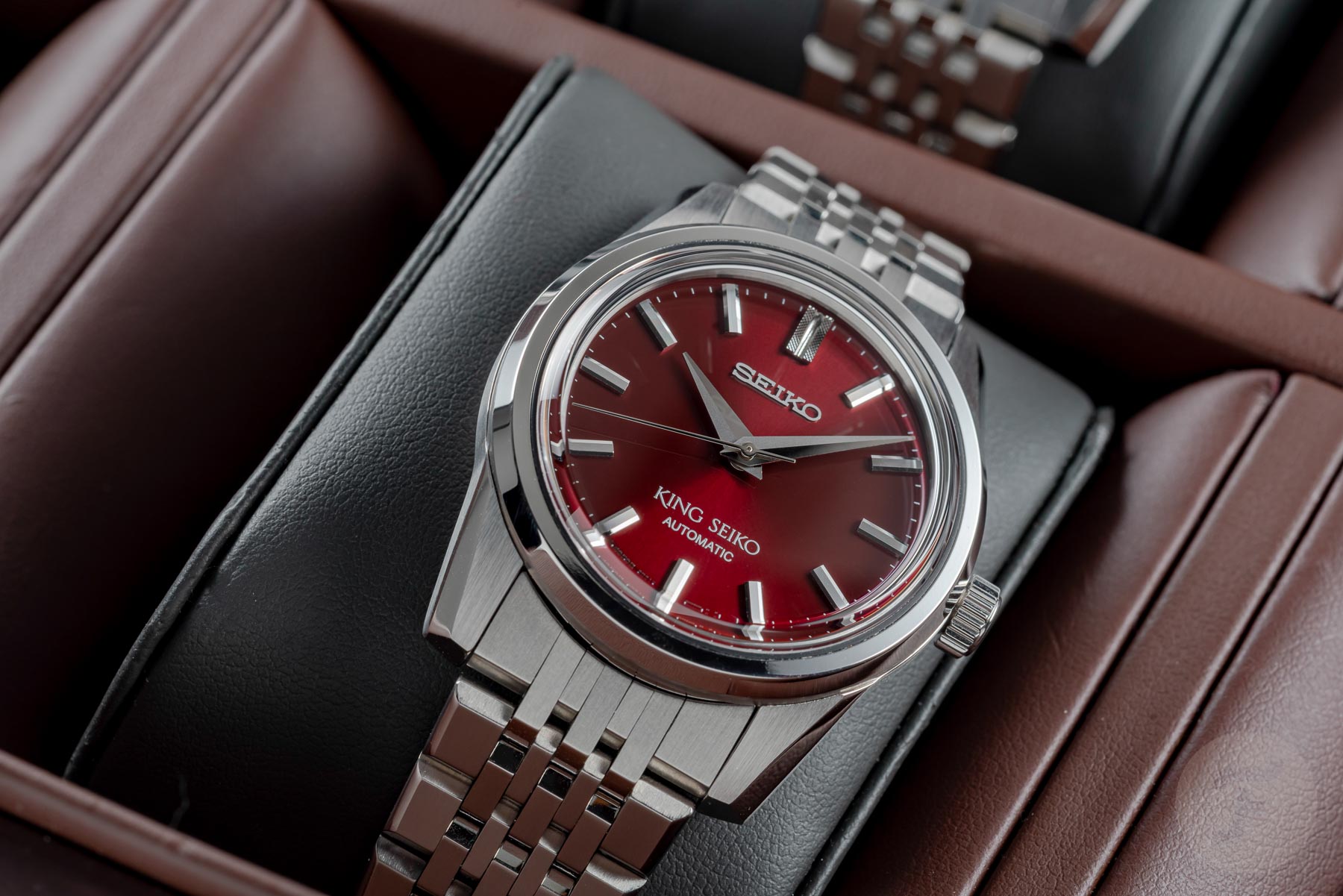 I have heard people voice a disliking for Seiko’s bracelets more than once. No doubt this is not the first time you’re hearing of this either. But I am happy to say that the bracelets were fine here. I had no qualms with them. They were comfortable on the wrist and finished nicely enough. What more can you really ask for? If for some reason, you don’t like the bracelet, Seiko has introduced five new alternative leather straps specially designed for the new collection. The bracelet really does help this watch to shine, though, as it complements the sharp lines and angles of the case. I think you’d lose some of that by switching to a different strap. 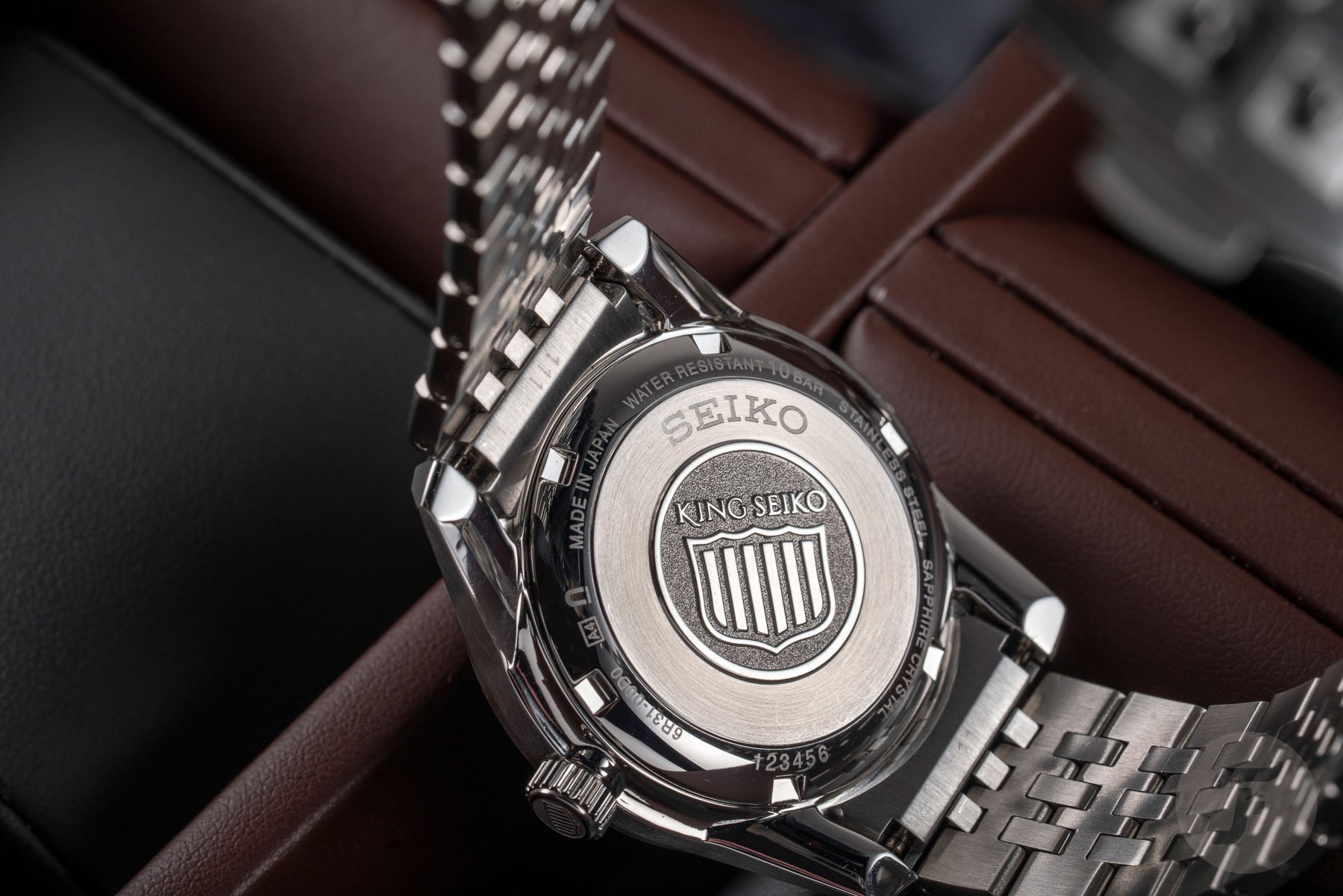 As I mentioned, the new King Seiko dials are date-free. That is thanks to the 6R31 time-only movement. If you’re not familiar with the 6R31, it’s a new version of Seiko’s high-performance 6R35 movement and was introduced in the middle of 2021. It delivers the same impressive 70-hour power reserve and accuracy attributes. You may recall that Seiko used the 6R35 previously in its Presage series. Given the price point and movement choice of the King Seiko collection, it appears that Seiko is very much positioning King Seiko alongside the Presage series, while still keeping it a separate line.

I think it makes sense, as these new models are much more palatable at €1,700 than at the €3,000 SJE083 reissue. And, of course, they come on a bracelet. Some people may cry foul as Seiko is essentially competing against itself with King Seiko versus Presage. But I think there’s a clear definition between the two collections. The Presage collection focuses more on Japanese traditional watchmaking and artistry. Just think of the enamel and porcelain dials as a prime example. The King Seiko collection allows Seiko to visit the Zeitgeist of its watchmaking from 1961 — vintage styles and designs at more affordable price points than Grand Seiko. I don’t foresee any self-created issues for Seiko with this move. I am glad that we’re getting King Seiko design back at a more wallet-friendly price. 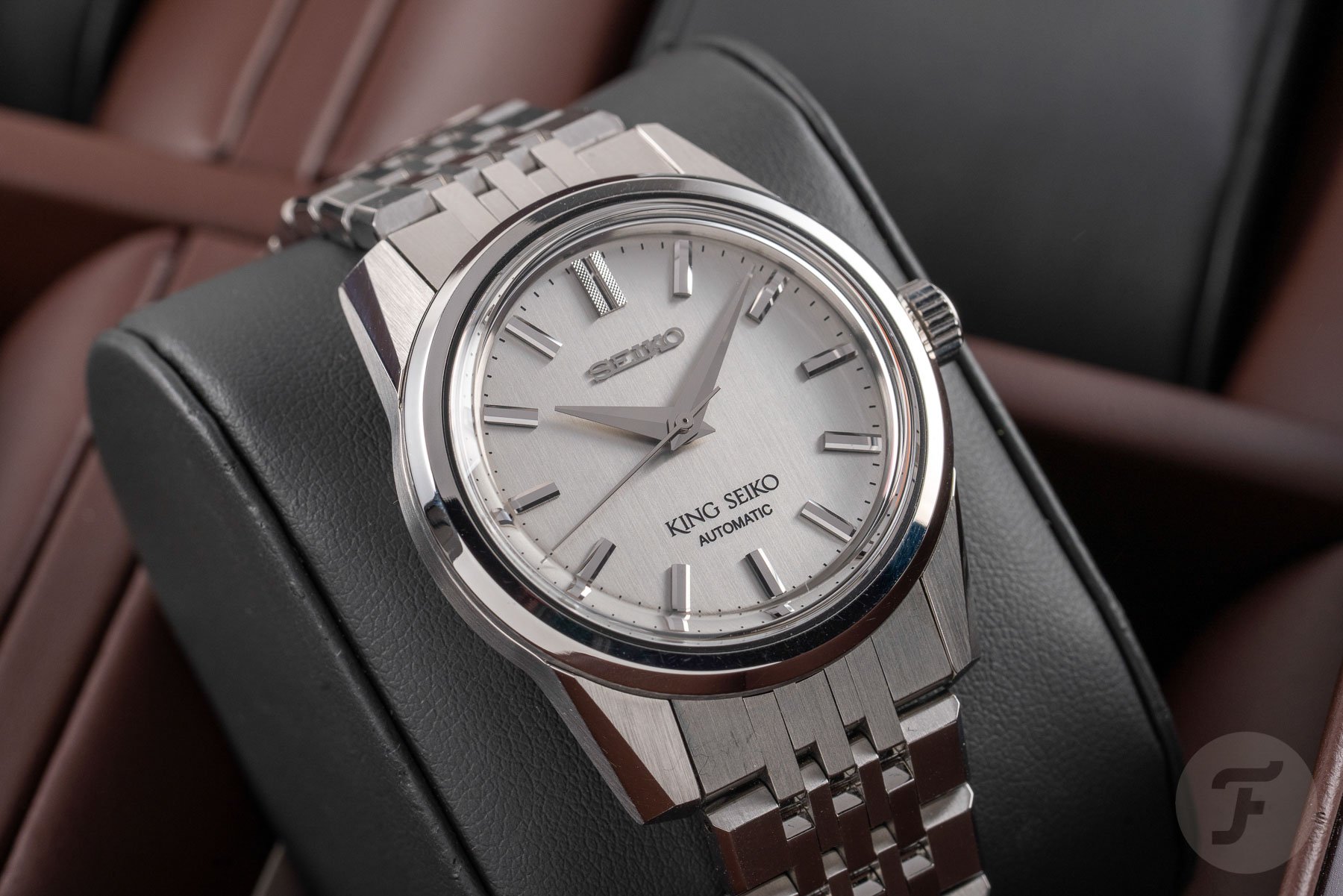 Seiko states that five new timepieces comprise the first collection. These will be available from February 2022 at Seiko Boutiques and selected retailers worldwide. The fact that Seiko calls it “the first collection” suggests we could well see more King Seiko goodness in the future! Let’s hope so!