When the Seiko Astron GPS Solar debuted in 2012, the light-powered, GPS-satellite-connected watch came in a hefty 47 × 16.5mm case. All that tech needed space, you see. But as you would expect, over time, Seiko managed to slim things — the high-tech quartz caliber, that is — down quite a bit. The latest four Astron iterations boast atomic-clock precision and recognize 39 time zones. They are slimmer, sleeker, and sharper than ever before. The Astron GPS Solar 5X53 Dual-Time comes in an edgy titanium case that measures a more moderate 42.7 × 12.2mm; numbers befitting an all-around, everyday (travel) watch.

To be honest, my Seiko Astron GPS Limited Edition 2012 SAST001 may be a 47 × 16mm watch, but it doesn’t feel too humongous on the wrist. That’s because of the shape, the use of titanium and ceramic, and the color black, which also slims things down visually. It’s fascinating to see my SAST001 next to the quartet of new, much more refined Astron GPS Solar 5X53 Dual-Time models; that’s what evolution looks like. All four new models feature more “mature” dials. There’s the silver SSH107 with darker sub-dials, the blue-gray SSH109, and the black SSH111, as well as the 10th Anniversary Limited Edition SSH113 with a dial that shows horizontal stripes in alternating shades of gray. The dials are pretty understated and subtle in their appearance with a hint of tradition thrown into the mix. This creates a style that won’t grow old. 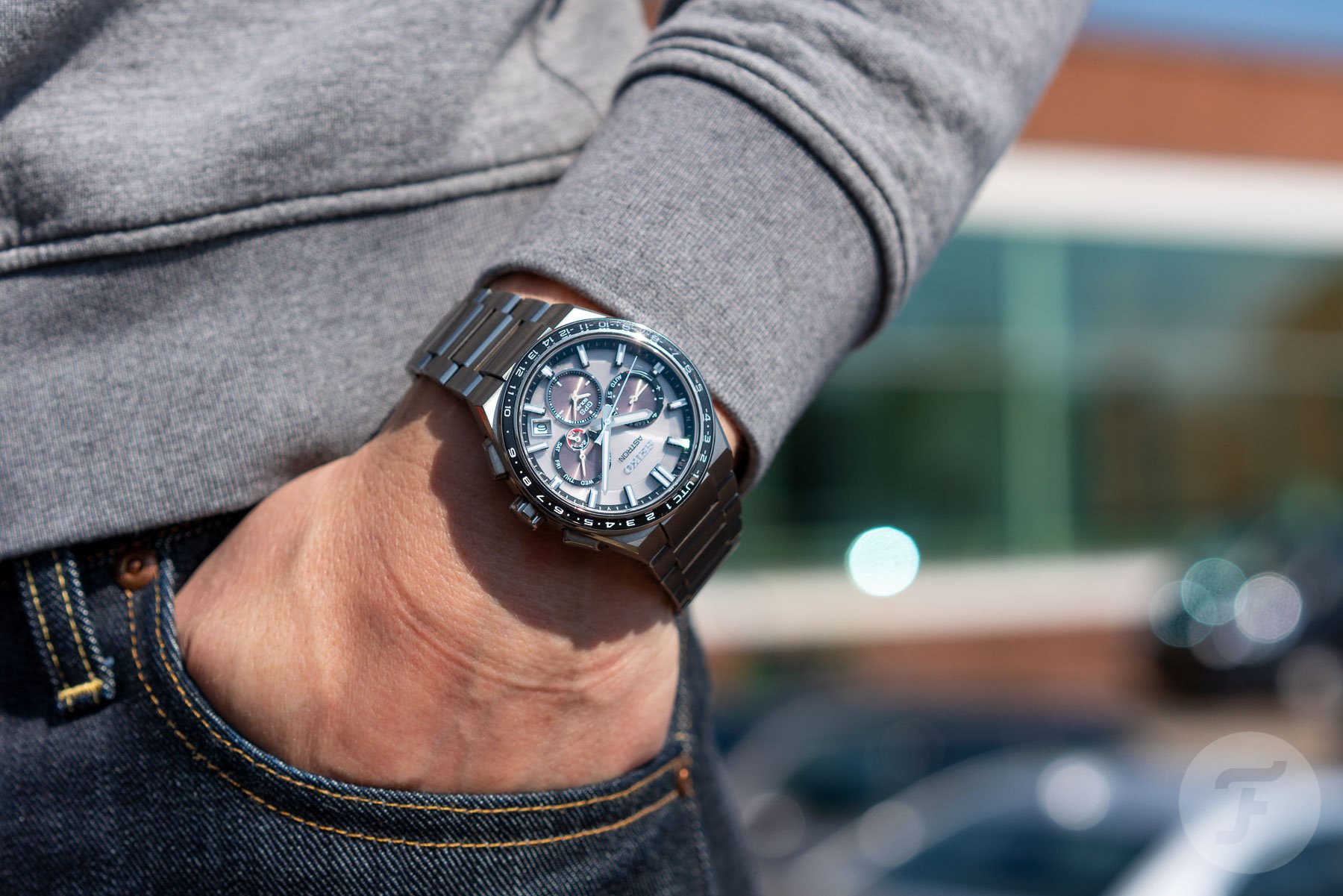 The indexes on the different dials are just as sharp as the case design, and just like the hour and minute hands, they have a received Lumibrite coating to guarantee legibility in low-light conditions. The sapphire glass with an anti-reflective coating ensures a clear view of the dial from any angle.

The four Astron models share the same 42.7 × 48 × 12.2mm cases in titanium with a sharp and angular construction that is both contemporary and refined. The titanium bracelet is equipped with an easy-adjust, three-fold clasp with a push-button release. And just like the case, it has a super-hard coating to keep scratches at bay. Another scratch-resistant component is the narrow sapphire bezel insert in dark gray or blue, against which the UTC zone markings stand out clearly. Because of the sapphire material, the bezel reflects the light with subtle brilliance. Seiko says the sparkling light reflections complement the Astron GPS Solar 5X53 Dual-Time’s technological uniqueness. 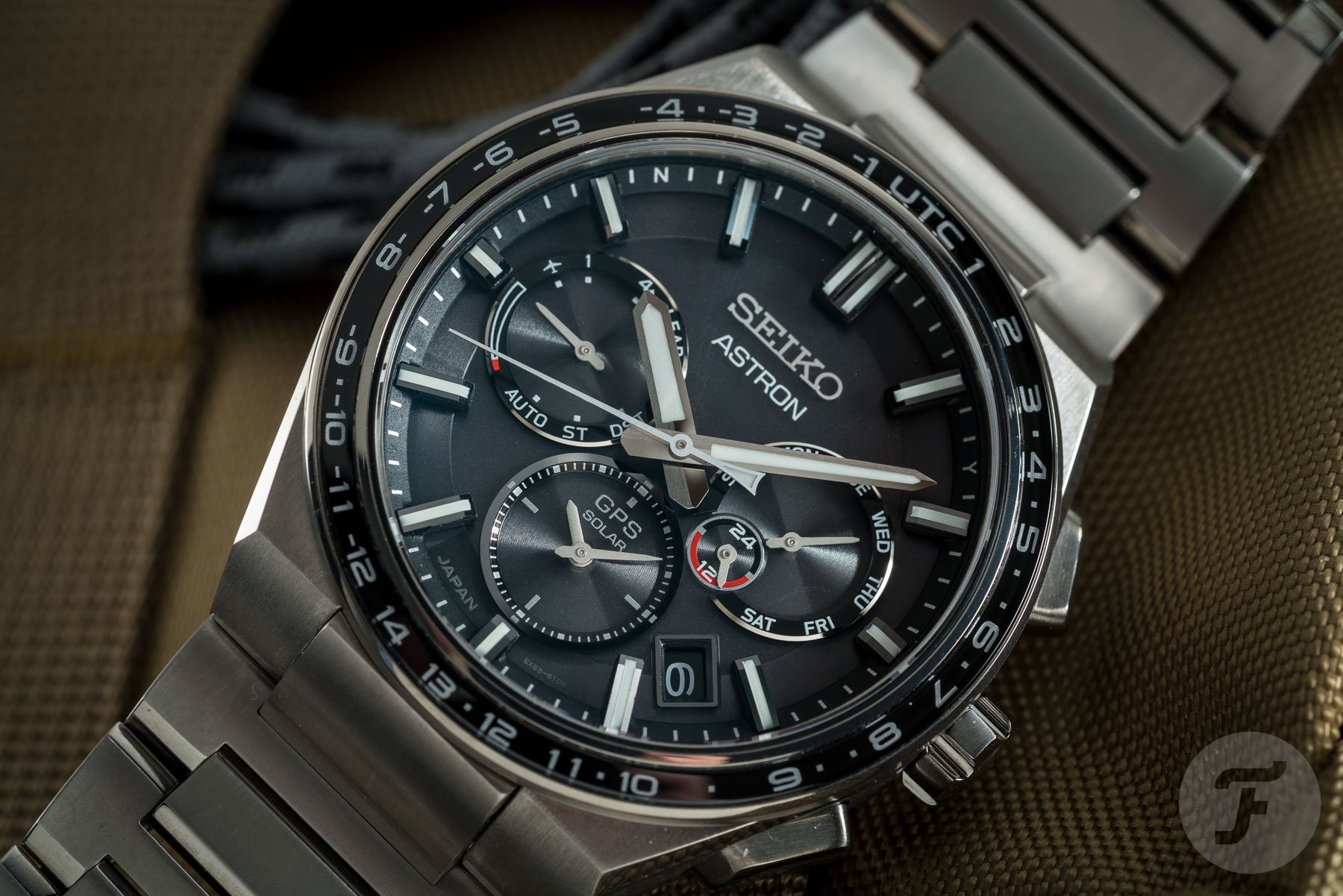 The wrist feel of the 5X53 is on point

The Astron GPS Solar 5X53 Dual-Time feels like a “normal” watch on the wrist. That might sound weird at first, but hear me out. An Astron is already something special because of the tech it uses to create a fantastic travel watch. But my black and gold Astron from 2012 shows in many ways that is a watch out of the ordinary. Apart from the massive case, there’s a very three-dimensional, architectural dial and striking red-gold-colored details. The new 5X33, however, with its sleek lines, slim profile, and subtle dial, has a less exuberant appearance.

The design language Seiko uses is modern, but the angles also give off a bit of a 1970s vibe. With retro styling at the center of attention these days, you could say that the design is 100% contemporary. On the wrist, the Astron GPS Solar 5X53 Dual-Time’s compact, angular design flows seamlessly from the case through the lugs to the bracelet, making it a wear-and-forget kind of watch. The lightweight titanium case and bracelet also have a hand in that, and so does the case’s low center of gravity. 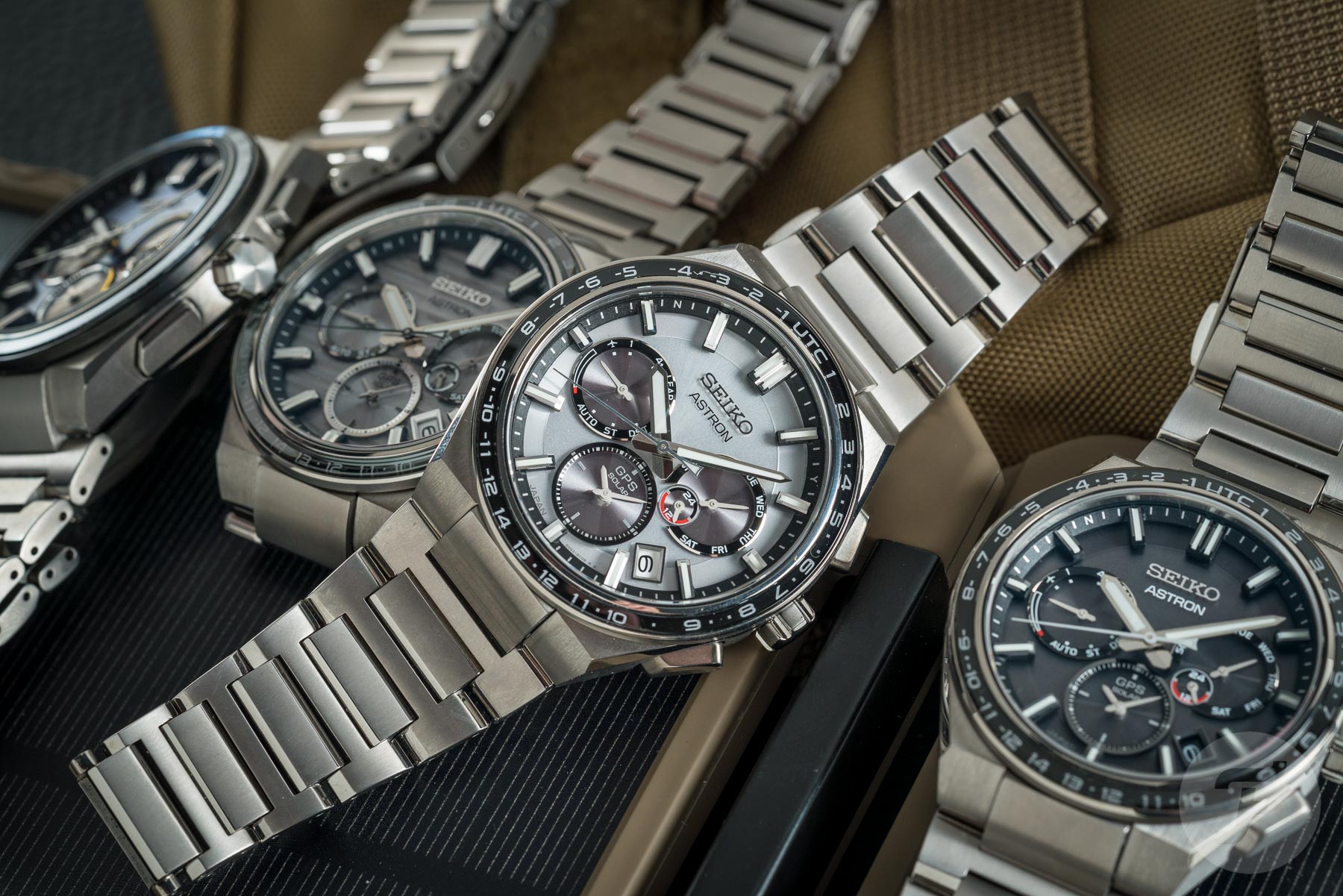 I touched on it earlier, but it’s the latest-generation caliber 5X53 GPS that does all the hard work. The quartz caliber is outfitted with a high-efficiency module that connects to the GPS satellite network. With just the push of a button, it effortlessly adjusts to any of 39 time zones with atomic-clock precision. Over the last 10 years, the movement inside the Astron has evolved, meaning it has become smaller, more energy-efficient, and easier to use. 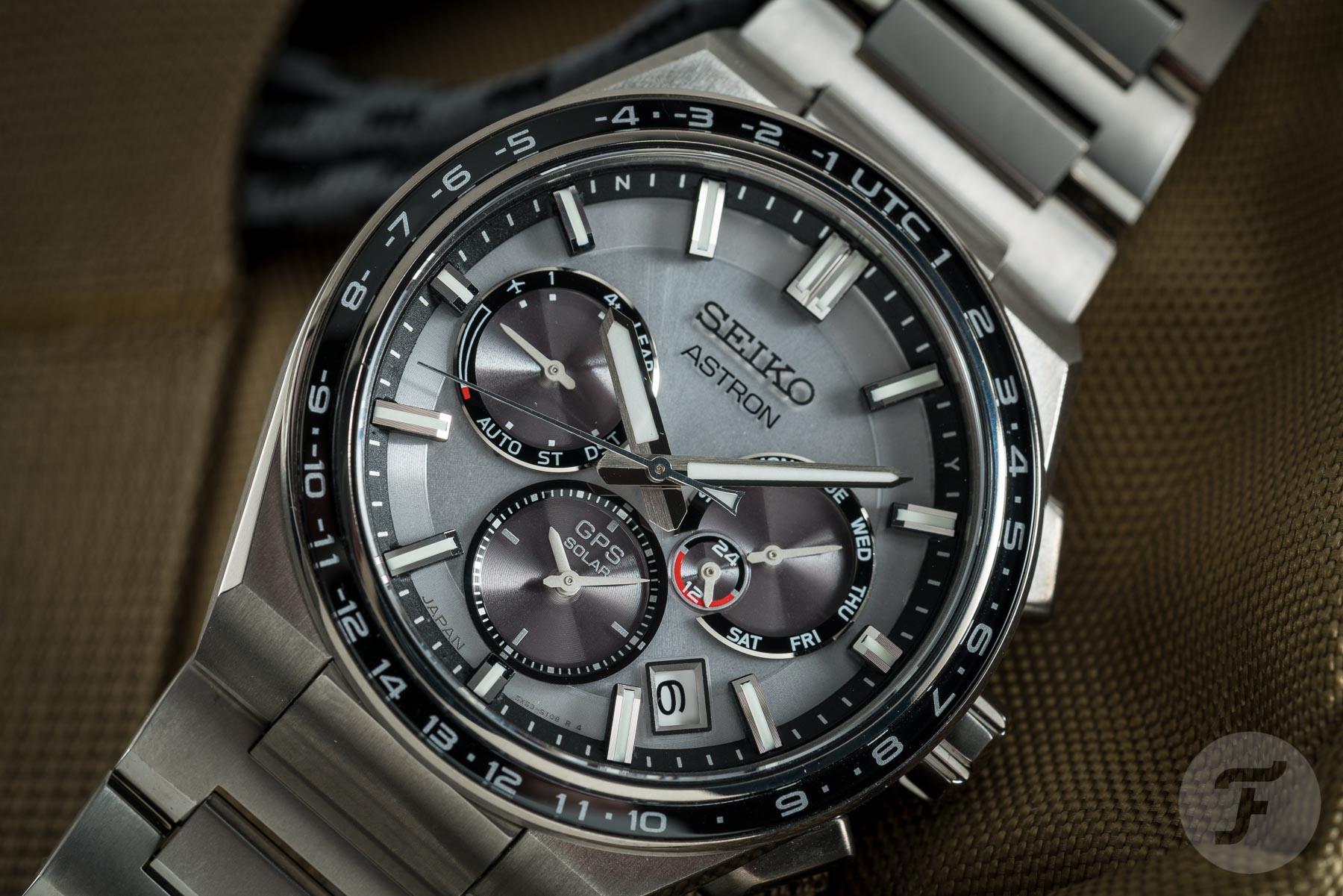 The caliber also provides a second timezone with AM/PM indication. When you need timezone adjustment, a single button push makes the hands spin faster than ever to adjust to the exact local time. This also happens when you engage Daylight Saving Time (DST) mode. Furthermore, the Astron GPS Solar 5X53 Dual-Time gives you a perpetual calendar that needs no correction until February 2100. And without receiving a GPS signal, the claimed accuracy is ±15 seconds per month — if you make sure to keep temperatures between 5°C and 35°C, that is. 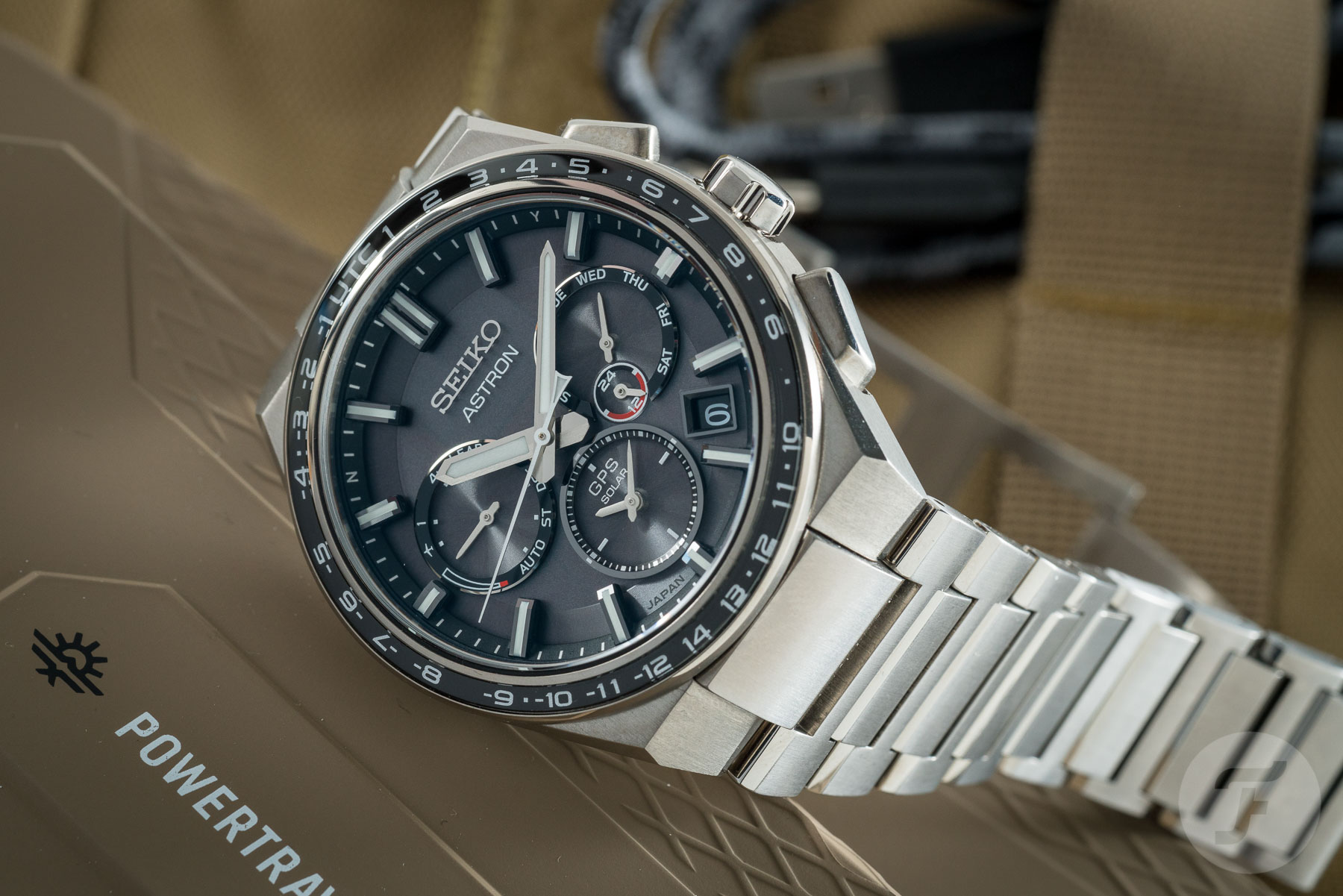 Straight through the dial

I wrote about the four different dials of the four new Astron GPS Solar 5X53 Dual-Time watches earlier, stating that they have a “mature” look. Aside from the “Solar” marking just south of the center, you’d never guess that any one of the traditional-looking dials can detect sunlight. But when it does, the watch connects to the GPS satellite network and automatically adjusts to the correct time. It’s a hidden story that is quite remarkable. Speaking about hidden, when the watch is kept in the dark, it remembers the time of its last successful manual connection. Only when you put it in the light again it will attempt to receive a fresh GPS signal.

The three non-limited Astron GPS Solar 5X53 Dual-Time watches — SSH107, SSH109, and SSH111 — join the main Astron collection and will become available in July 2022. The SSH113, a limited edition of 1,500 pieces, will be available from May. All versions of the new Aston come with a recommended retail price in Europe of €2,600. As always, let us know what you think of the new 5X35 Dual-Time models in the comments below.