NEW: The Nezumi Voiture × RUF 2 — A Scorching Hot Racer For The Wrist

If only I could have raced it myself...
Thor Svaboe
comments 9
Share

Nezumi, from my neighboring country of Sweden, is a tough fuel-infused brand with a penchant for colorful dials. Rob has professed his love for the brand and I get it. For me, it’s moved mecha-quartz up the ladder of cool, adding some super fresh dials along the way. Here is yet another bright piece of wrist candy, this time with a German racing inspiration. How on earth could this make me disappointed?

Well, for one simple reason: the new Nezumi Voiture × RUF 2 could’ve raced up the charts in our ongoing The Fast And The Fratelli contest… if only it had used a mechanical movement! The goal is to find the best mechanical racing chronograph of the last decade, and this new Voiture from our Swedish friends almost had what it takes. It’s got a brash dial and is named after a mythical RUF-tuned Porsche 911, making it a killer pick for racing fans in the market for mecha-quartz. 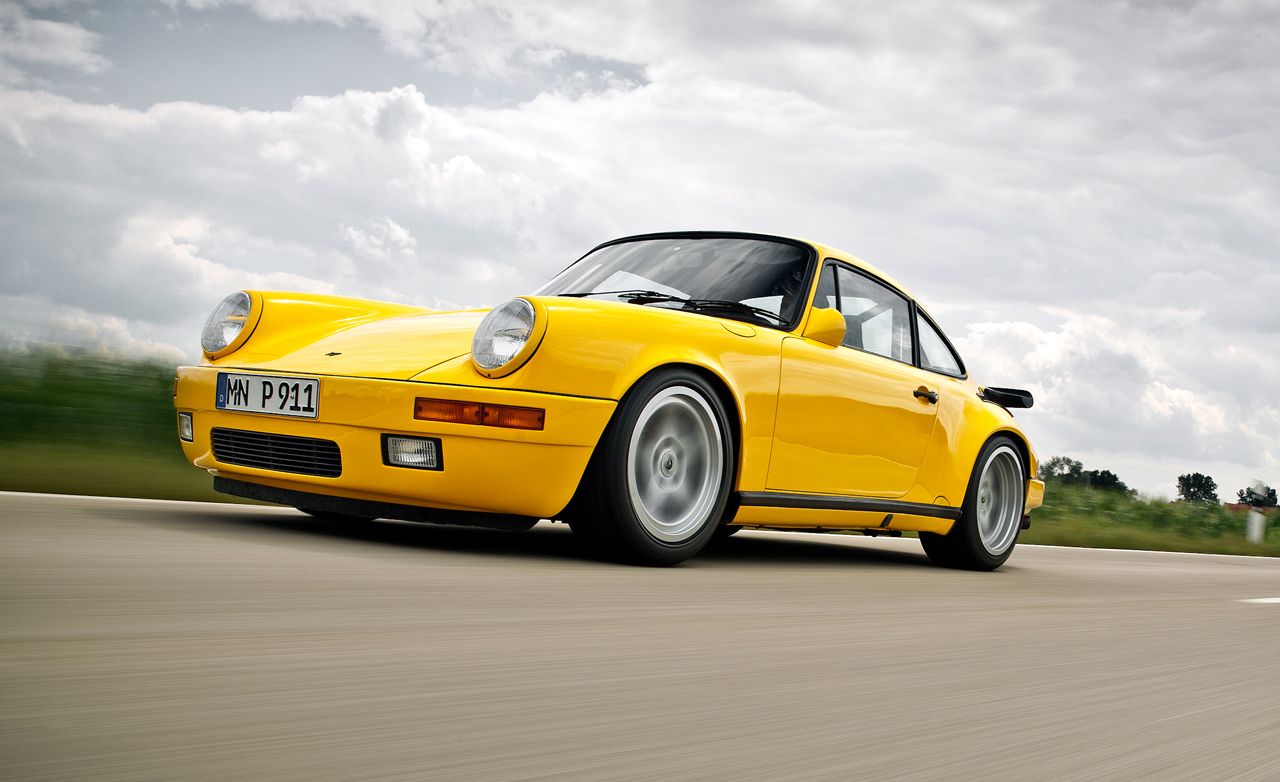 A bright dial and a racing Porsche

RUF is to Porsche what AMG is to Mercedes. As if Porsche needed it! I mean, the Porsche 911 is German racing perfection. But you’d be surprised what the engineering wizards of Pfaffenhausen can achieve. Founded in 1939, RUF Automobile blasted onto the scene in 1987, when the unhinged RUF CTR “Yellowbird” broke records at the Nürburgring, making it the world’s fastest production car at the time. With its liberal flash of yellow, the Nezumi × RUF is the second collaboration between these high-octane brands, and it’s one that feels deeply inspired indeed. 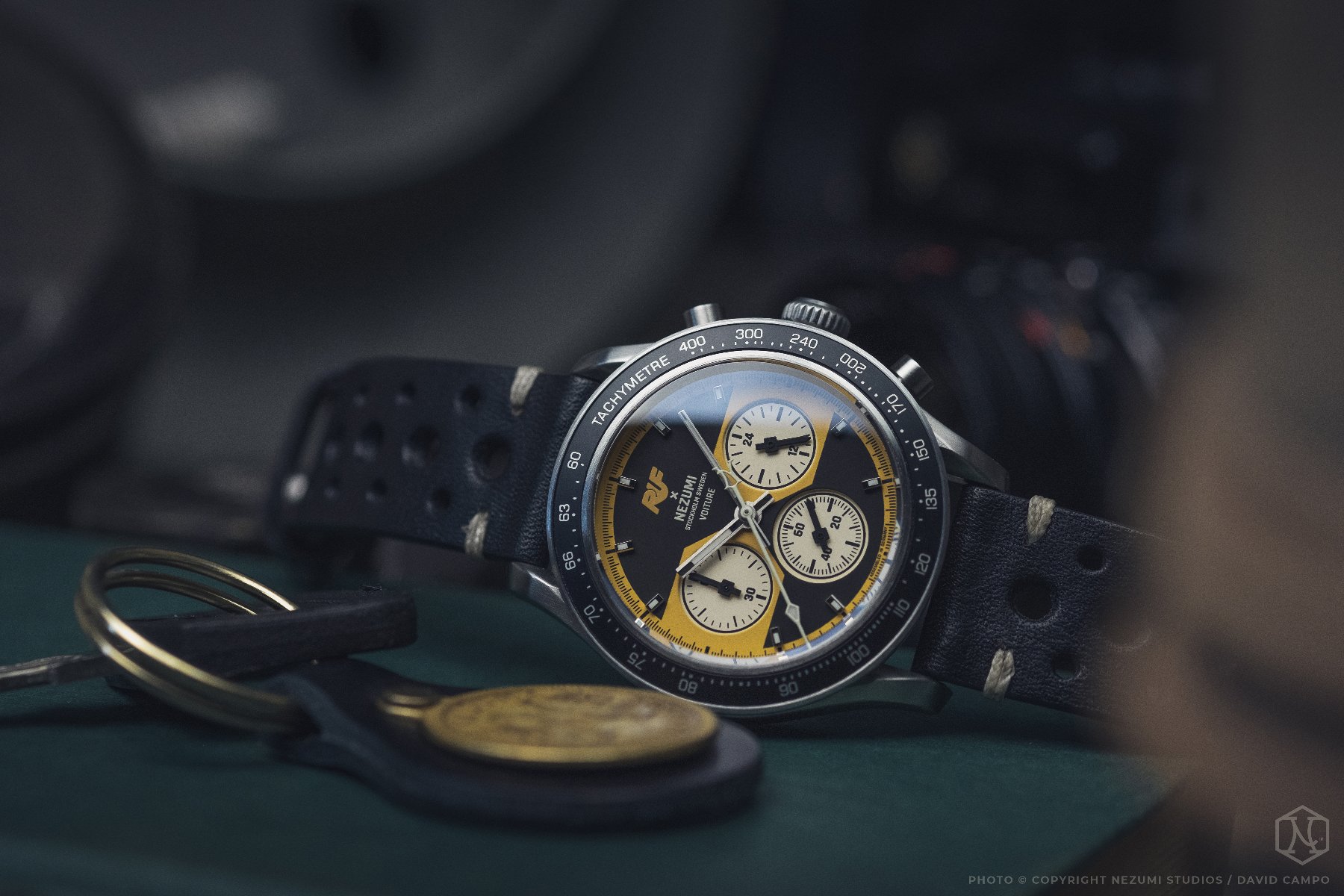 We know the quirky-cool dial language of the Nezumi Voiture, as well as the brand’s more recent Tonnerre. I have a suspicion it would do rather well in a duel against the Yema Rallye Andretti or the Breitling Top Time, if only had it been eligible for the race. There is a distinct lack of brands that charm us with the excess of colors from the late ’60s and early ’70s chronographs. The design sense of Nezumi Studios taps into this rich heritage and channels pure wrist-cool at rather accessible prices. Coupled with its connection to the classic Porsche club Roughneck Brigade, fuel runs in Nezumi’s veins, and it shows. 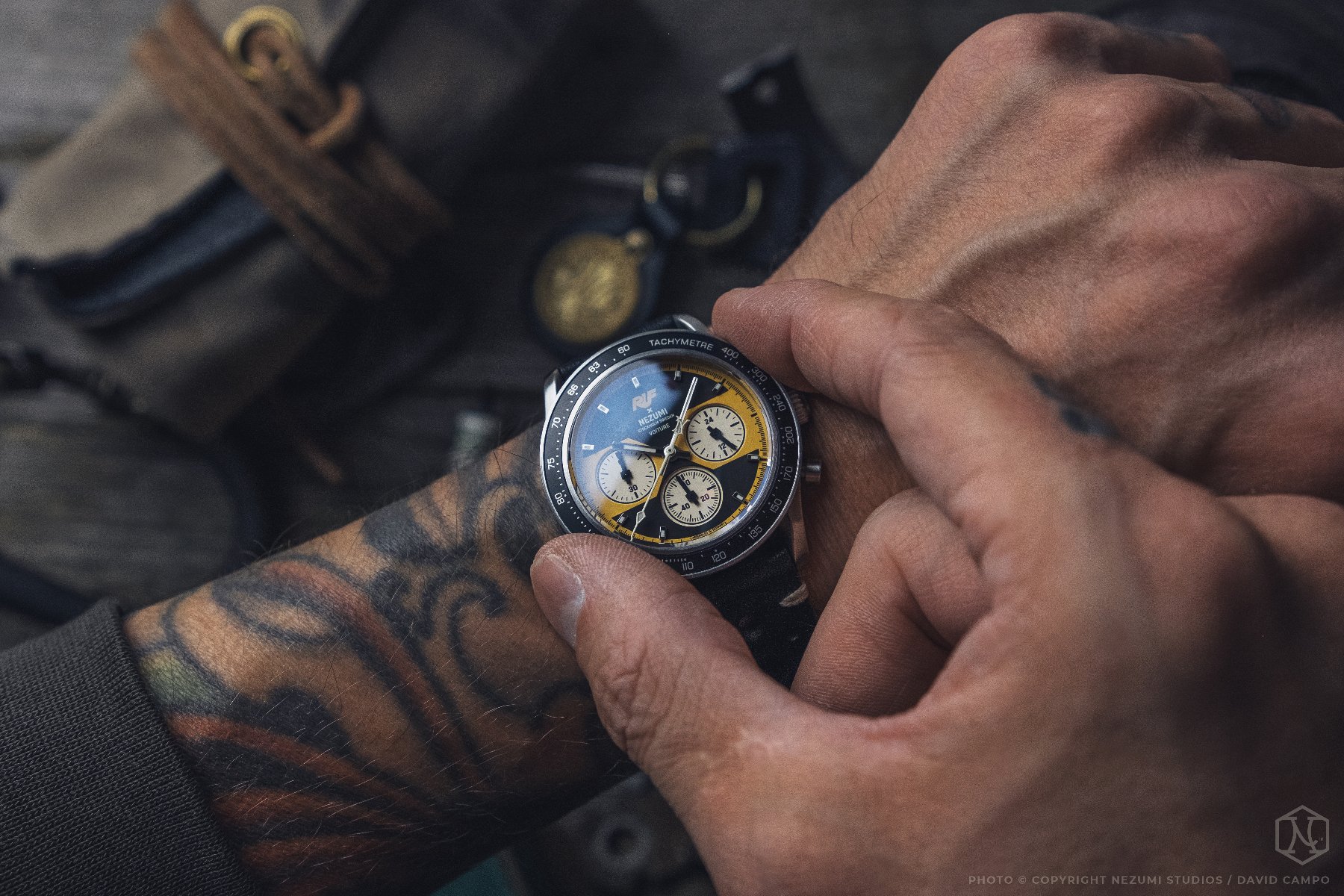 A “case” in point

An overused pun? Well, you got me there. But seriously, the case is superb for the price. With a sweet 40mm diameter and a goldilocks 47mm lug-to-lug span, Nezumi has passed its ergonomics exam. The solid Seiko VK63 mecha-quartz movement provides peace of mind, but also helps the watch stay reasonably slim. At an elegant 11.25mm + 1.75mm for the domed sapphire, it’ll match that frayed denim jacket or contrast a dressy shirt. The satin black tachymeter bezel is exactly what we want in a racing chronograph. The Voiture has Sinn-style polished steel rings framing the crisp tachymeter insert, making the already good 40mm size wear smaller. The lugs have an elegant sweep holding the perfect rally strap. At 20mm wide, it’ll be a boon for you strap swappers out there. But you’re already transfixed by that vivid dial, aren’t you? 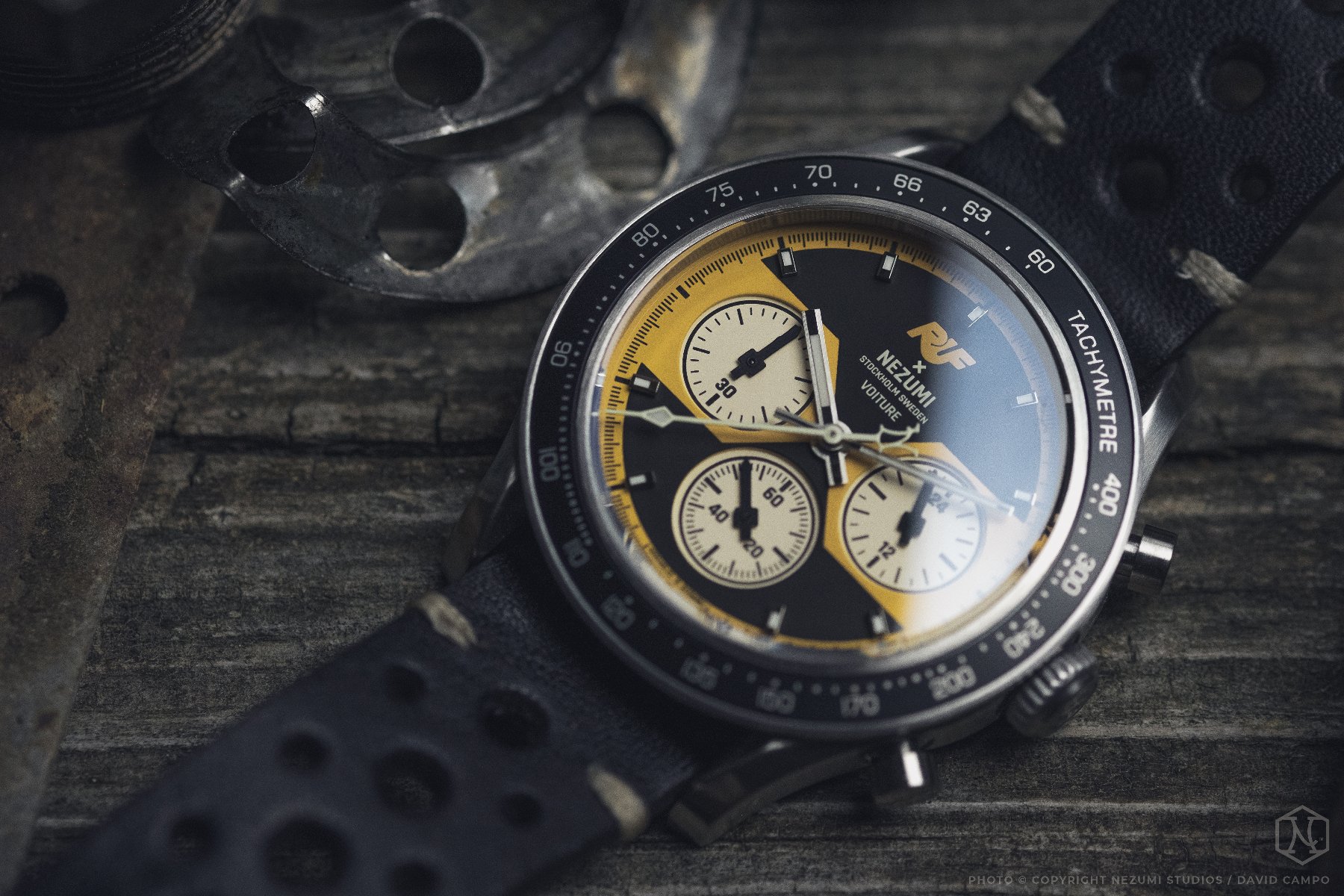 Race-fueled maximalism for all

The mask-like dial of the Nezumi × RUF is ’70s maximalism at its best. The RUF logo sits prominently at 12, making an important point. The world of automotive-themed watches is filled with examples of big brand faux pas and cringe-worthy dials. Here, it’s cohesive, and if you know, you know. The intense yellow works perfectly with the matte graphite black dial, superbly shown in these moody shots from Nezumi (bravo, they’re tasty). The off-white registers have chunky, almost rectangular stubby hands, and they look fit to race. I also do enjoy a bit of polished pop, and Nezumi doesn’t disappoint, with polished, lume-filled baton hands and a crisp white chronograph seconds hand. This matches the pure ’70s touch of small, polished applied indices with a dab of lume for that period check. 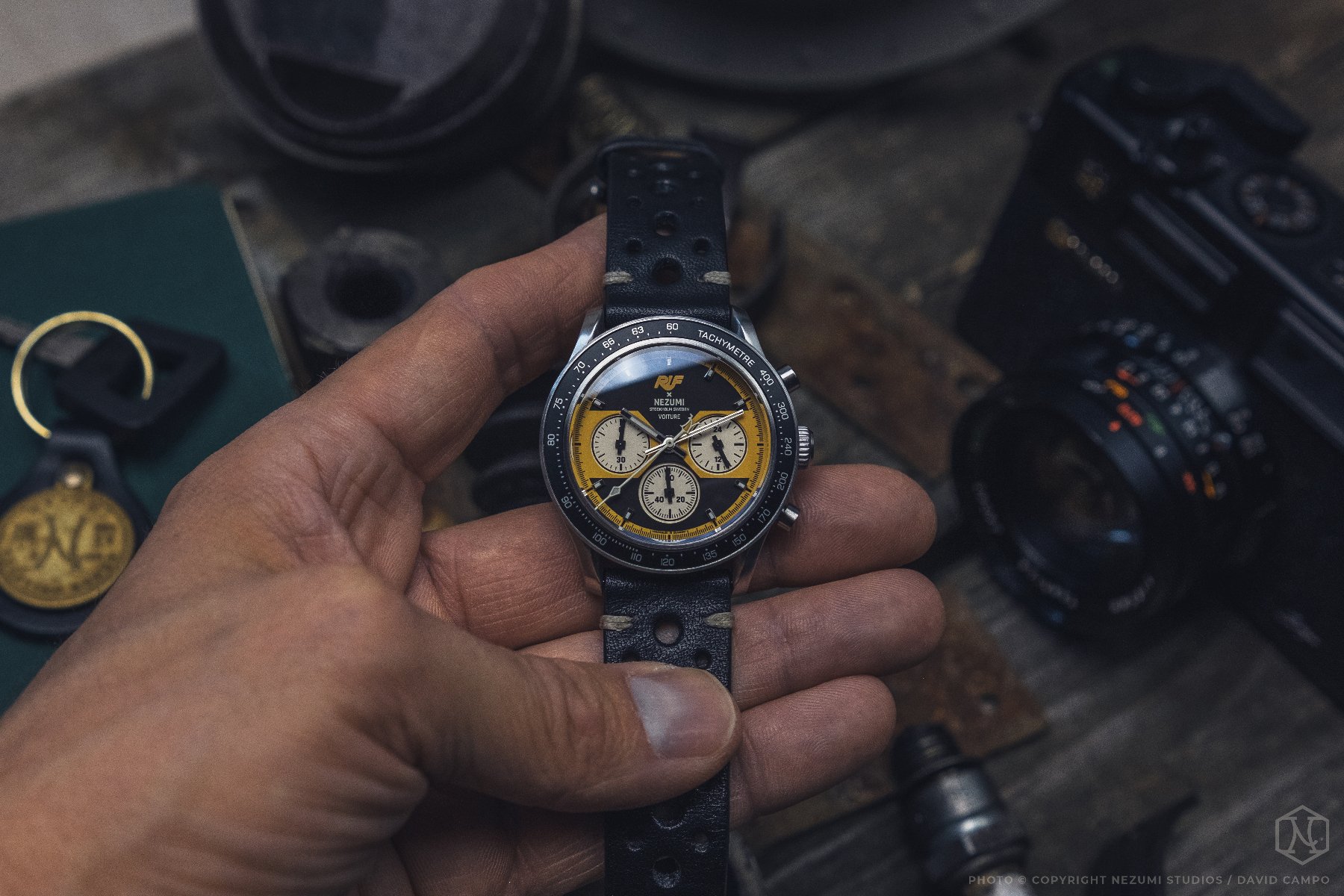 This is not for the shy-wristed, and that’s a big plus in my book. If you have a Porsche for hot laps on the Nürburgring with your mates, you’ll use electronic timing equipment. But this is all about the vibe. An inspirational vibe that almost makes you smell the petrol, and hear that boxer-engine, offbeat rumble from a modified exhaust on a 911. My home office feels like the Porsche pits at LeMans just writing this, so yes, it’s fair to say I like it a lot.

At SEK 5900 (roughly $590), the small output of Nezumi is rather tempting, so you’d have to be quick if you want one of these. Check out Nezumi Studios for more details on the Nezumi × RUF 2 and the rest of the Swedish brand’s colorful range.