The Fast And The Fratelli: Yema Rallye Andretti Limited Vs. The Yema Speedgraf

I believe I am the only one that ended up with a pretty unusual draw where two models from the same manufacturer face each other. The first round of The Fast And The Fratelli is slowly but surely coming to an end, and you get to decide which of these two French Yema chronographs makes it through.

The last Summer Splash series made me (in)famous because both watches that I nominated were against the rules. Slightly embarrassing, but I made it through without being fired. So, to make sure I am aligned this time, let’s repeat The Fast And The Fratelli basics. We (or you, to be precise) are about to vote for the best racing chronograph of the past ten years. Nominated watches must be able to track elapsed time for at least one minute. The watches must also feature a tachymeter scale and their movements need to be mechanical.

I guess someone (Rob, I assume) thinks I was not punished enough. Two of the four nominations I made were assigned to Balazs. The one I really wanted to see make it into the final selection was the Yema Speedgraf, and here it is. But Rob, the master of twists, made quite the unexpected move and pit the Yema Rallye Andretti Limited against it. And he assigned it to me! With four modern and about ten vintage Yema watches, I am now officially known as the Yema fan within the Fratello editors team. Now I feel like I’ve been asked which of my babies I prefer. But it’s time to man up, and you are the ones deciding at the end of the day. I hope this face-to-face battle of the two Yema watches will be a spicy addition to The Fast And The Fratelli. 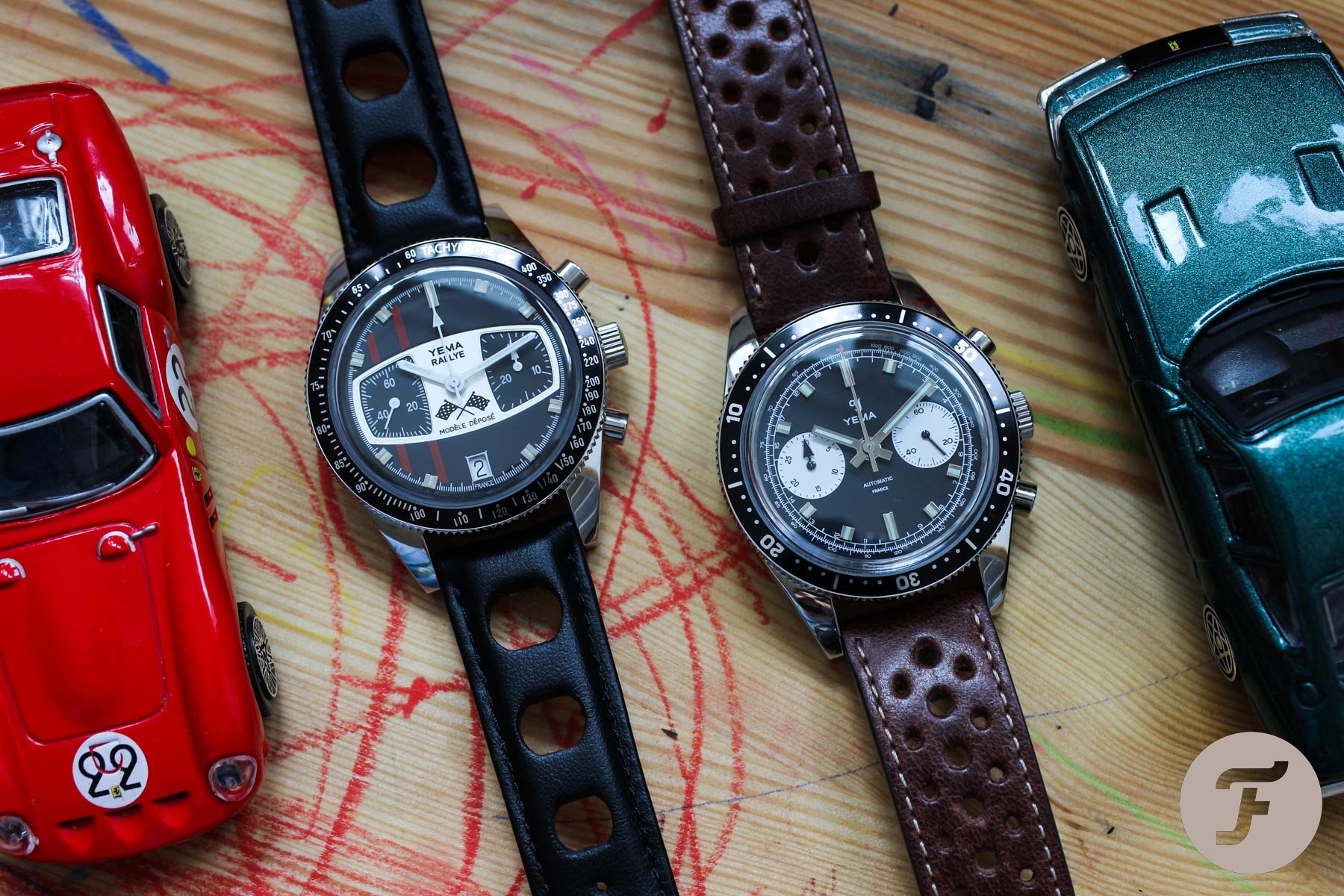 The same, but so different

I’ve spent the last few days with the Speedgraf on one wrist and the Rallye on the other. The Speedgraf is nothing new to me, as I wrote a hands-on review a few years ago, just when it was released. And it was one of the few watches that kept pestering my mind, so much so that I recently had to add it to my own collection. But I’d never seen or worn the Rallye Andretti in the flesh. So I asked Yema to ship one over for this live-or-die battle. Comparing a watch that I own to pictures just would not be fair, now would it?

After a few days, I was fascinated by how different the designs are, while still maintaining the Yema identity. I won’t pretend that there isn’t a lingering general public opinion on which might be the hot candidate for the next round. The striking, iconic, and really cool sub-register design, the racing stripes, and the era endorsement by 1969 Indianapolis 500 winner Mario Andretti are hard to kill. But the Speedgraf, whose role model rightly got the Yema “Daytona” nickname over the years, has something magnetic about it. Today, I will try to figure it out. 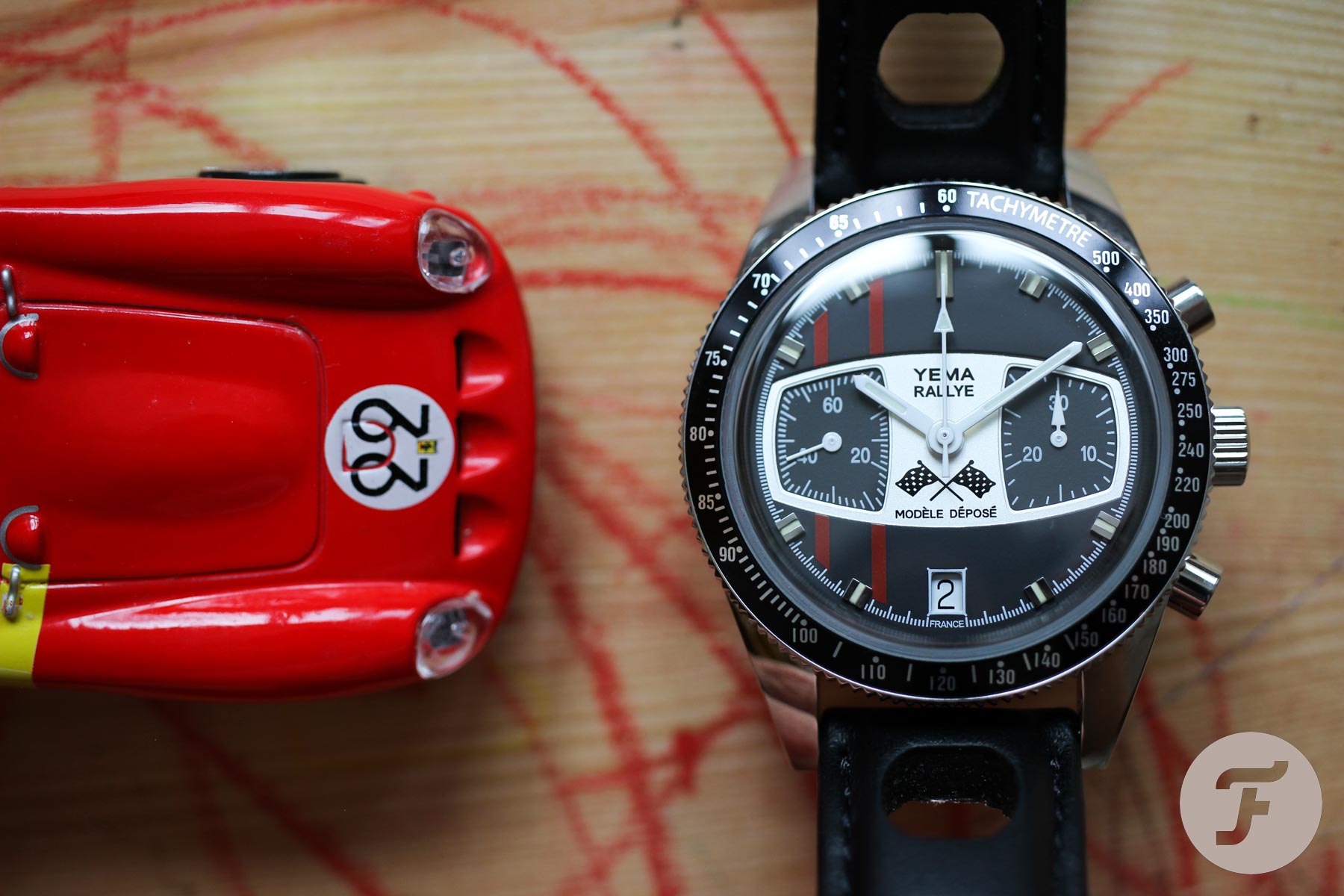 When you compare the Speedgraf to the Rallye Andretti from above, the cases, with their long, rabbit-ear lugs, seem to be the same. But put them into a burger formation, and you will notice that the Andretti seems way slimmer than the Speedgraf. This is funny, as it is all about the angling, and the total thickness is almost identical. That’s 1:0 for Andretti. Give the case another thought and a flick of your wrist, and you realize there is a different engine inside. The beat rate of 28,000vph is the same, but the Speedgraf counts 34 jewels against the Andretti’s 27. I have to say, despite the fact that I love the precise and endless rotor spin of the Valjoux 7753 much more, I vote for the Seiko NE86 movement in the Speedgraf. The score is now 1:1.

Before we move to the design, let’s take one surprising stop at the crowns. Again, they look almost identical, but the crown on the Yema Speedgraf is slightly recessed and screws down. Looking at the 100m water resistance rating shining in both model specs, maybe it’s an example of different engineering. But it makes me feel better, so that’s 2:1 for the Speedgraf. 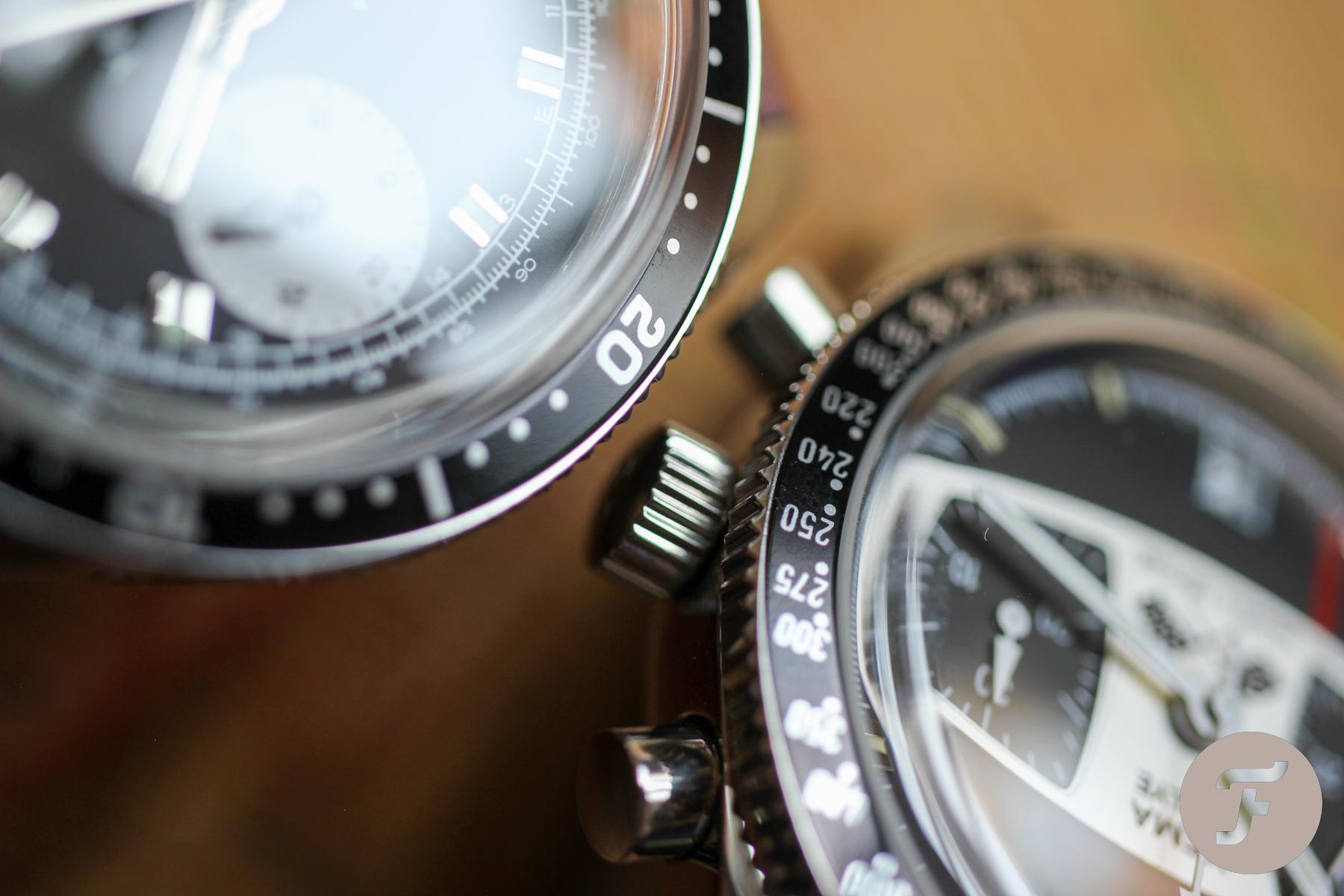 When it comes down to looks, the tachymeter bezel with miniature lettering is pure art. Especially when done on a black insert. But who of you uses it for calculating speed? Well, maybe it’s just me who votes on the practical side, as I find the countdown bezel the winner here. The sports jersey style of numbers is pretty cool too. Both bezels are non-clicking and have just about perfect friction. Sorry, Andretti, it’s 3:1 for the Speedgraf.

I already pointed out some of the Andretti dial highlights. The car dashboard-inspired sub-registers with chromed brass framing are a unique signature. The layout is functional, and the design is not grating. Even the checkered flags symbol doesn’t look childish or funny to me. Interestingly, my wife finds it ugly, and I find it just beautiful. We usually have similar tastes. 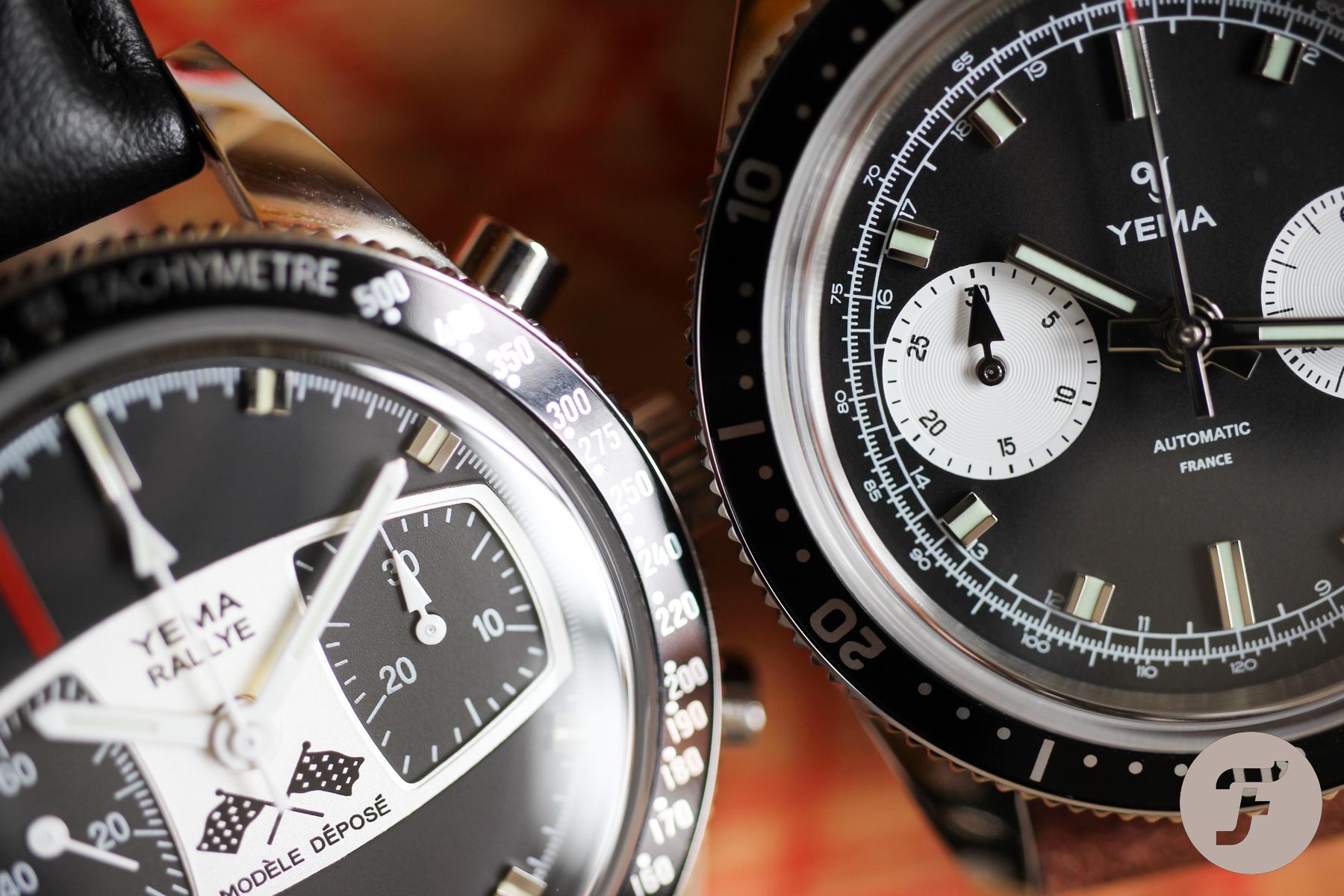 The Speedgraf’s minute counter is on the opposite side of the dial from that of the Andretti — and that of most other chronographs too, for that matter. But I find it refreshing, just like the style of the long arrow hands that inhabit the minute counters on both watches. The sub-registers on the Speedgraf have no edge, and at first glance, they look boringly normal. But the opposite is true. The small seconds register uses a different, “thin but fat” font that reminds me of markings on a race car from the era of black-and-white photos. A different but quite dynamic orientation of the numbers in the neighboring minute counter gives it another edge.

The Andretti has white and sportier hands, while the Speedgraf has wider and more legible lume on the otherwise identical polished, applied indexes. I am also in love with the Speedgraf’s old-school design that combines a countdown bezel and a tachymeter track. What’s my verdict on their designs overall? Both are winners in a different way, so I decided to grant points to both of them. The subtotal counts 4:2 for the Speedgraf. 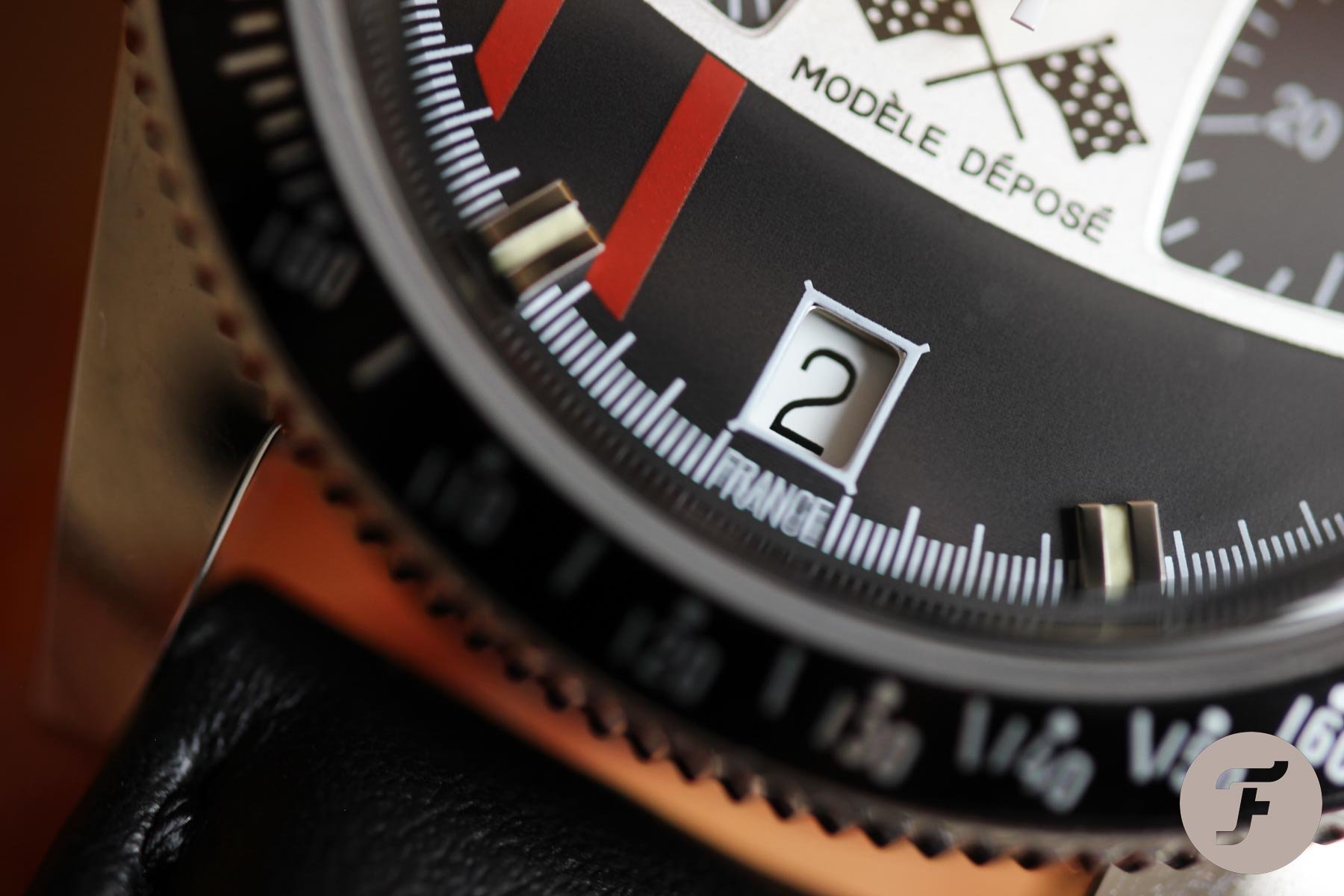 Oh, there’s one more detail to compare. Although really, there is not much to “compare,” per se. The integration of the date on the Andretti is fantastic, enriched with creative white printing in the corners of the window. And with no date on the Speedgraf, it makes the game closer — 4:3 for the Speedgraf. 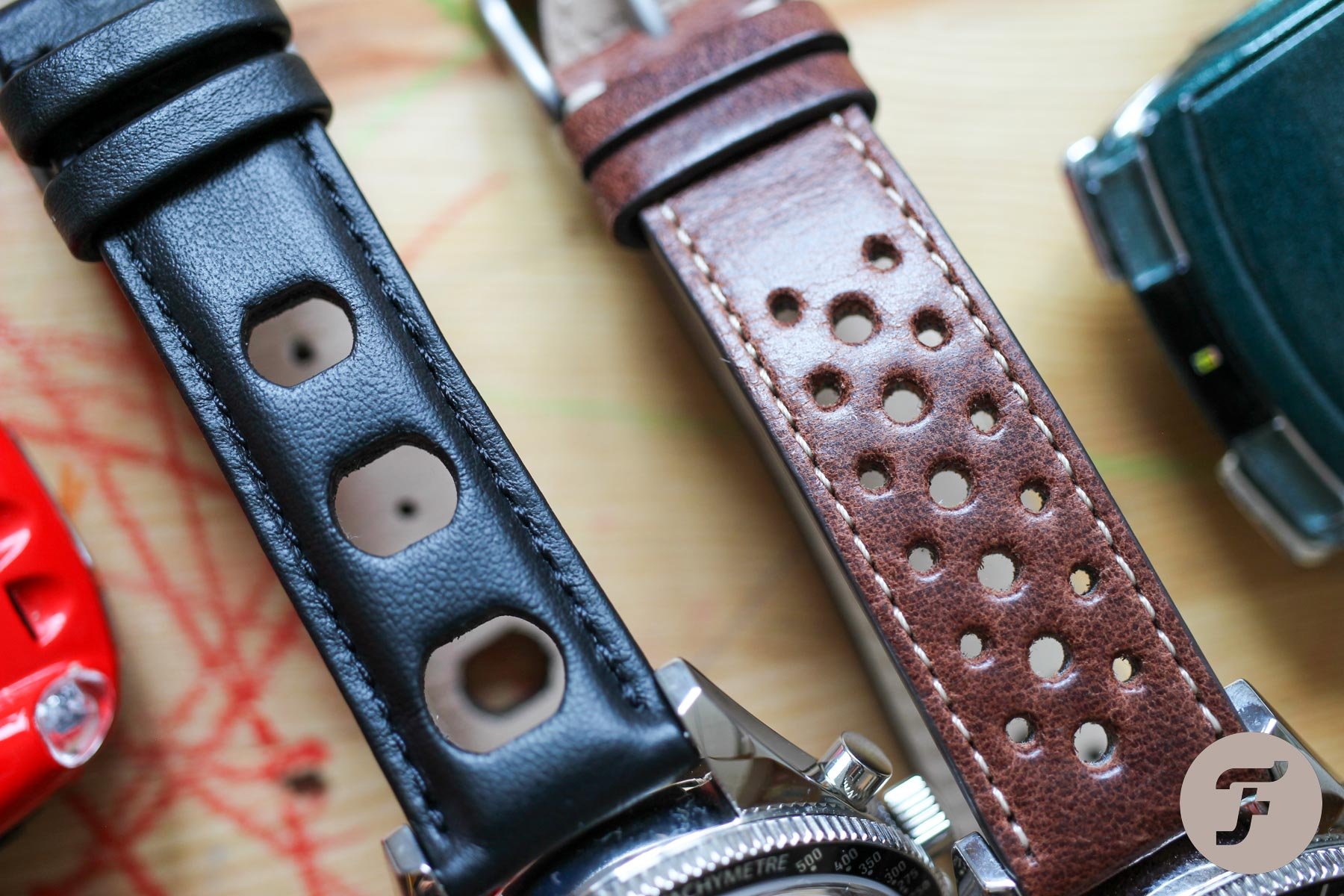 The case backs and straps

The case backs with the sculpted Yema emblem are pieces of art. There can be no winner there. The buckles are the same, and while the straps are different, they are both equally soft. You can change straps anyway, but I believe factory fit counts. The initial numbered run of the first 300 Speedgraf watches had a beautiful, vintage-inspired strap. I loved it much more than the brown strap seen here, which is indeed comfortable, though slightly distracting. So when it comes to straps, a point slides to Andretti. And that means we are tied at 4:4 points.

By the way, both of these chronographs are still available. You know what? I should probably not check the Yema website, because I feel like I am about to order the Yema Rallye Andretti too. Help me decide which to move to the second round of The Fast And The Fratelli, and let me know why in the comments below.