Feeling the vibes, the history, and the lifestyle
Lex Stolk
comments 8
Share

“Hey! You’re wearing the new Nezumi Voiture ref. VM1S.601 chronograph,” the neurobiologist enthusiastically said during last Saturday’s Fratello get-together. I was quite surprised by that. Nezumi is not a mainstream brand, and the lights in the bar were dimmed. Still, he identified the watch as soon as it met his gaze. Later, I found out that the neurobiologist has a scary knack for remembering reference numbers. I suspect, since he’s in the brain business and probably knows a trick or two to get the most out of the human brain, he also stunned some other attendees with his factual knowledge. Anyway, back to the blue Nezumi Voiture ref. VM1S.601 chronograph. I have been wearing it for a while and here are my thoughts and experiences.

My Norwegian colleague Thor already wrote quite extensively about the launch of this Voiture VM1S chronograph that celebrates ten years of Nezumi Studios. He raved about the watch, but not because of the Scandinavian connection. No, it was something non-geographical that came from the heart. “I am colored by my love of classic cars and the smell of oil and petrol, which infuse the chronograph,” is what he wrote. Let me quickly refresh your memory by telling you that Nezumi Studios is the brainchild of Stockholm-based designer, fashion industry veteran, and vintage car and watch enthusiast, David Campo. On the brand’s webpage, Nezumi Studios presents itself as a lifestyle brand. And by doing so, it doesn’t matter anymore that the Voiture ref. VM1S.601 makes me think of chronographs from yesteryear made by Breitling, Heuer, and Tudor. Clever move, David, clever move. 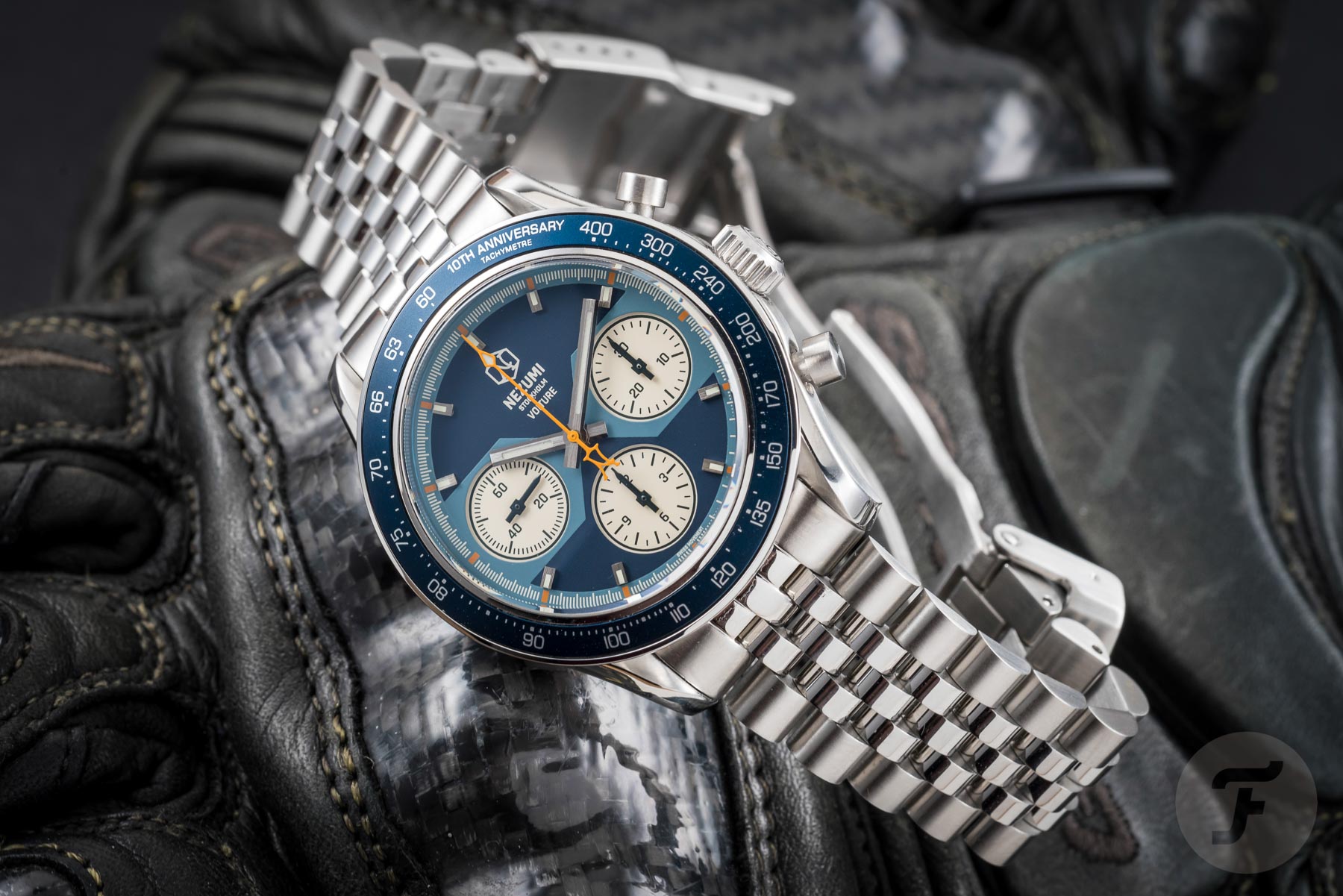 To celebrate the fact that David started Nezumi Studios ten years ago by releasing a limited line of fifty selvage denim jeans manufactured in Sweden, there now is a trio of mechanical chronographs. That doesn’t make any sense unless you’re an evolving lifestyle brand. Following the exclusive jeans, leather goods, accessories, and eventually watches came out under the Nezumi name. 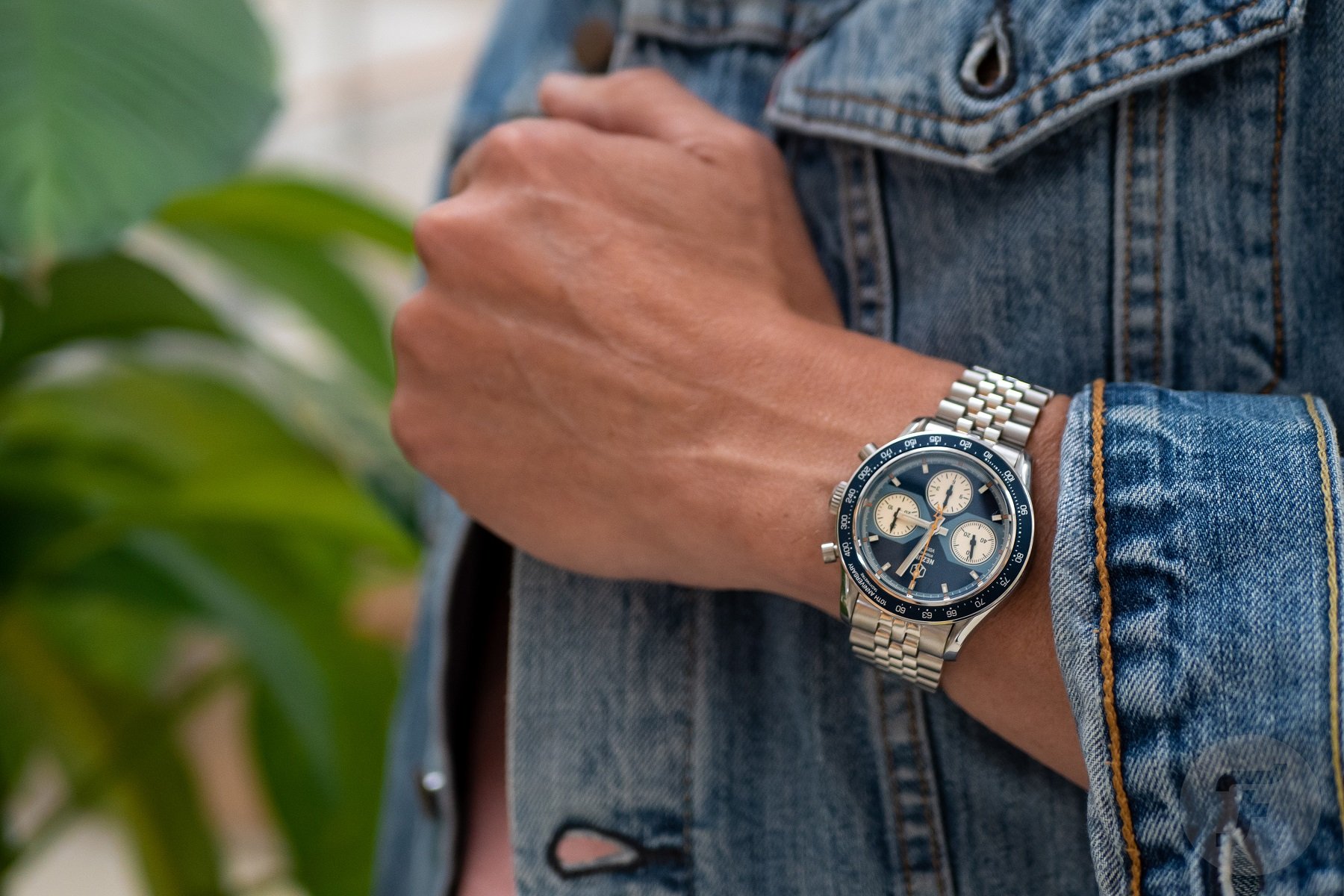 The mechanical Voiture chronograph is a big step up from the ones that come with a Seiko VK63 meca-quartz movement. The meca-quartz Voiture costs €372. On the other hand, the black, gray, and blue mechanical party pieces that come in a limited edition of 100 units each have a price of €1,679. It makes sense that Nezumi uses the Voiture to celebrate the brand’s ten-year anniversary since this car-inspired chronograph is the brand’s origin watch. 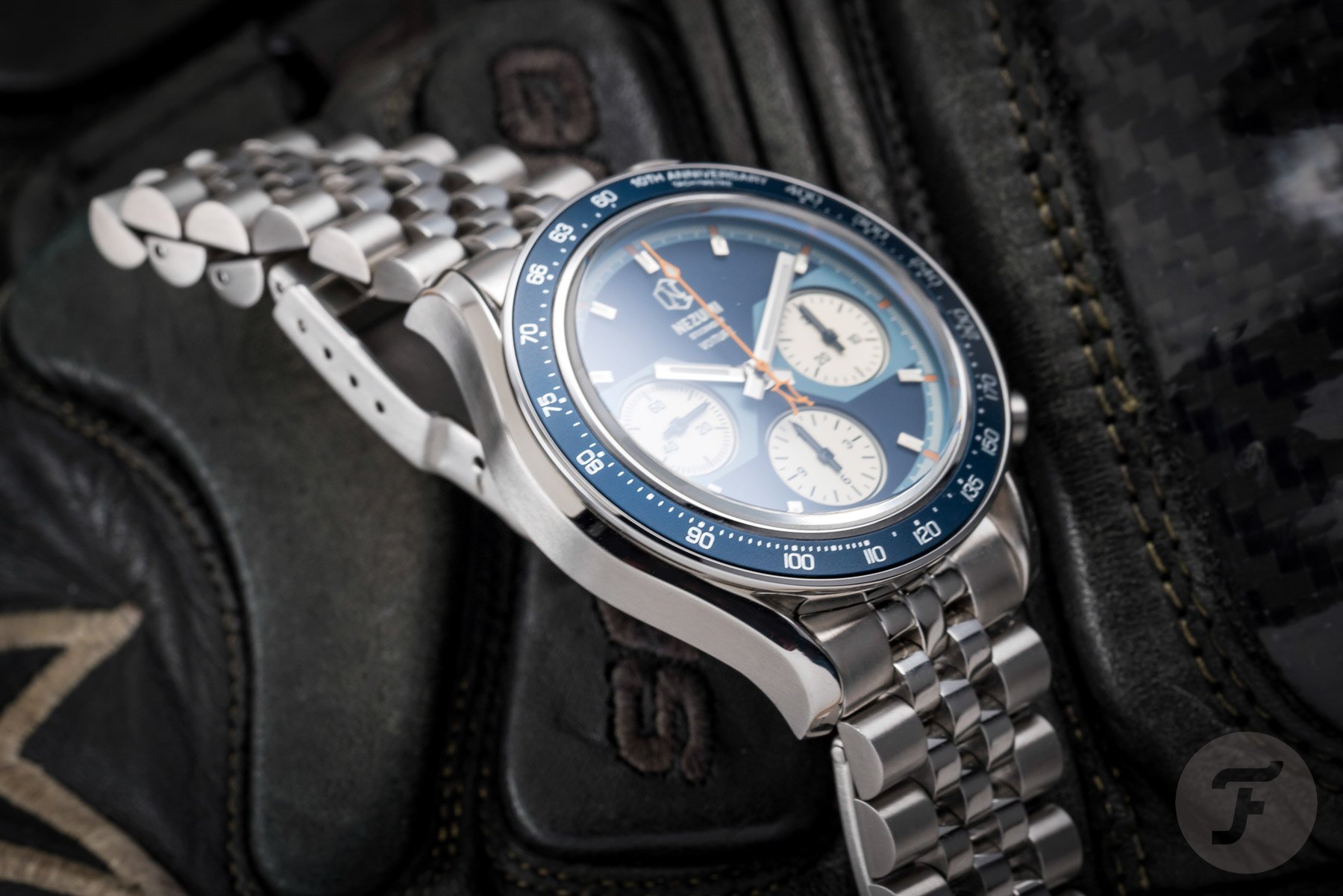 A chronograph with a resonating design

The Nezumi Voiture ref. VM1S.601 is conceived in Stockholm but assembled in Germany. Powering the watch is the Swiss Sellita SW510 Mb with a 58-hour power reserve. This manual-winding movement forgoes a date — did I just hear a “hallelujah”? Externally, the watch shows its 1960s and ’70s inspiration with total confidence. There’s a touch of racing utility — the tachymeter on the fixed bezel — and a lot of retro funkiness going on in just the right amounts. 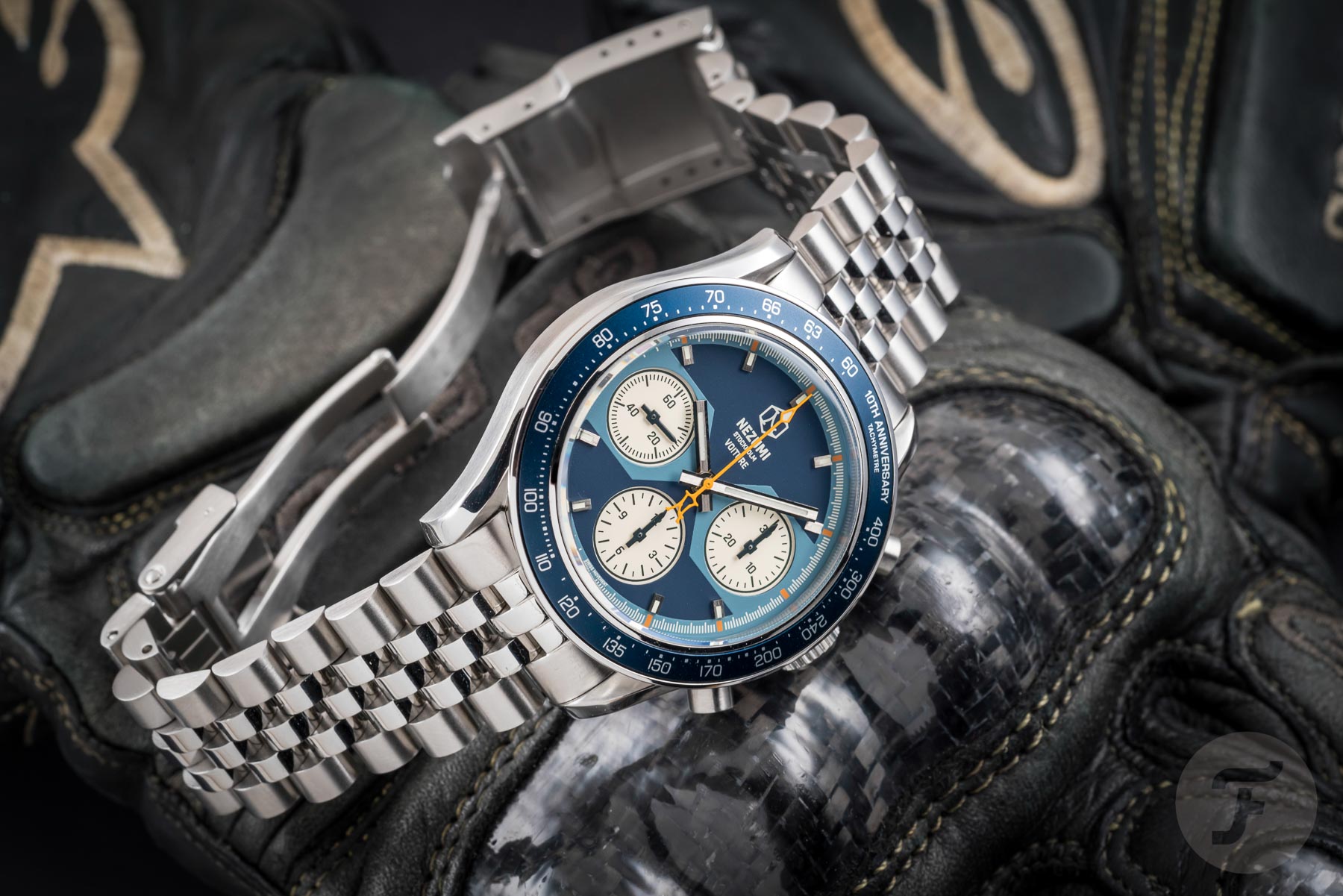 The Voiture is an eclectic homage to an era, a period in time that still gets people’s hearts racing. Classic cars are honest, charismatic, and captivating creations — analogical machines with a heartbeat. And the designs of the ’60s and ’70s — not just watches, by the way — still speak to us because they show a colorful sense of futuristic optimism. Just a side note, but maybe it resonates with us because we desperately need that back… 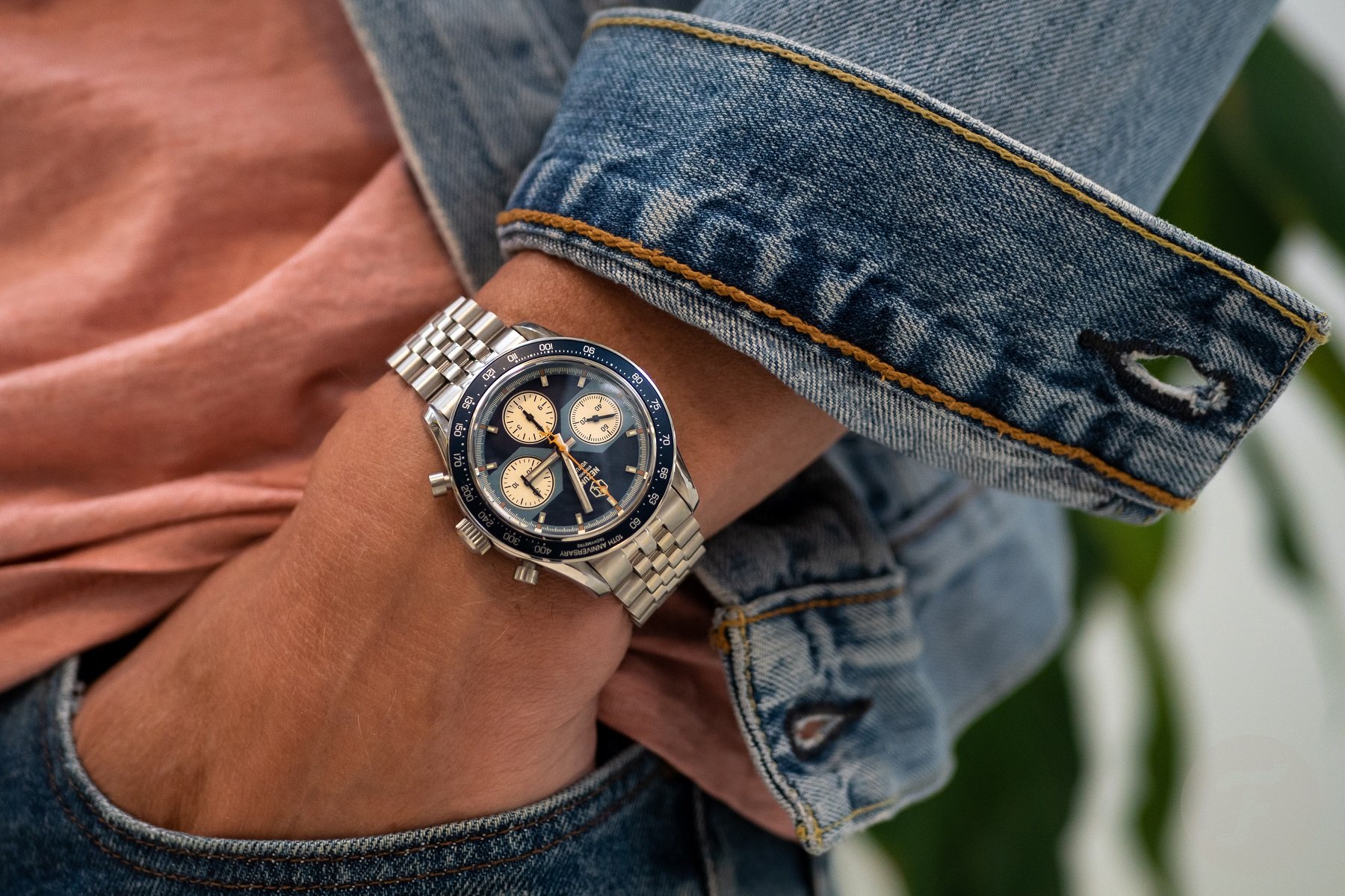 So, when I saw the Voiture Chronograph with two shades of blue and contrasting sub-dials, a matching bezel, and an easy-on-the-eye Jubilee-style bracelet, I immediately wanted to try it on… and I did! To my luck, the bracelet was already sized to fit me, and the watch felt right at home on my wrist. The case size is a medium 40 × 12.6mm — 14.5mm if measured at the center point of the domed crystal — with a lug-to-lug length of 47mm.

The watch I got to wear was a pre-production model. So, if you see a scratch somewhere it’s not supposed to be, a slight misalignment of the orange chronograph seconds hand, or a brushed surface that looks a bit crude, fear not; the production models will have those issues taken care of. The watch feels solid and looks the part. The colors are spot-on and tasteful, and so is the “Zorro mask”, the design feature that is probably the most retro element of the watch. 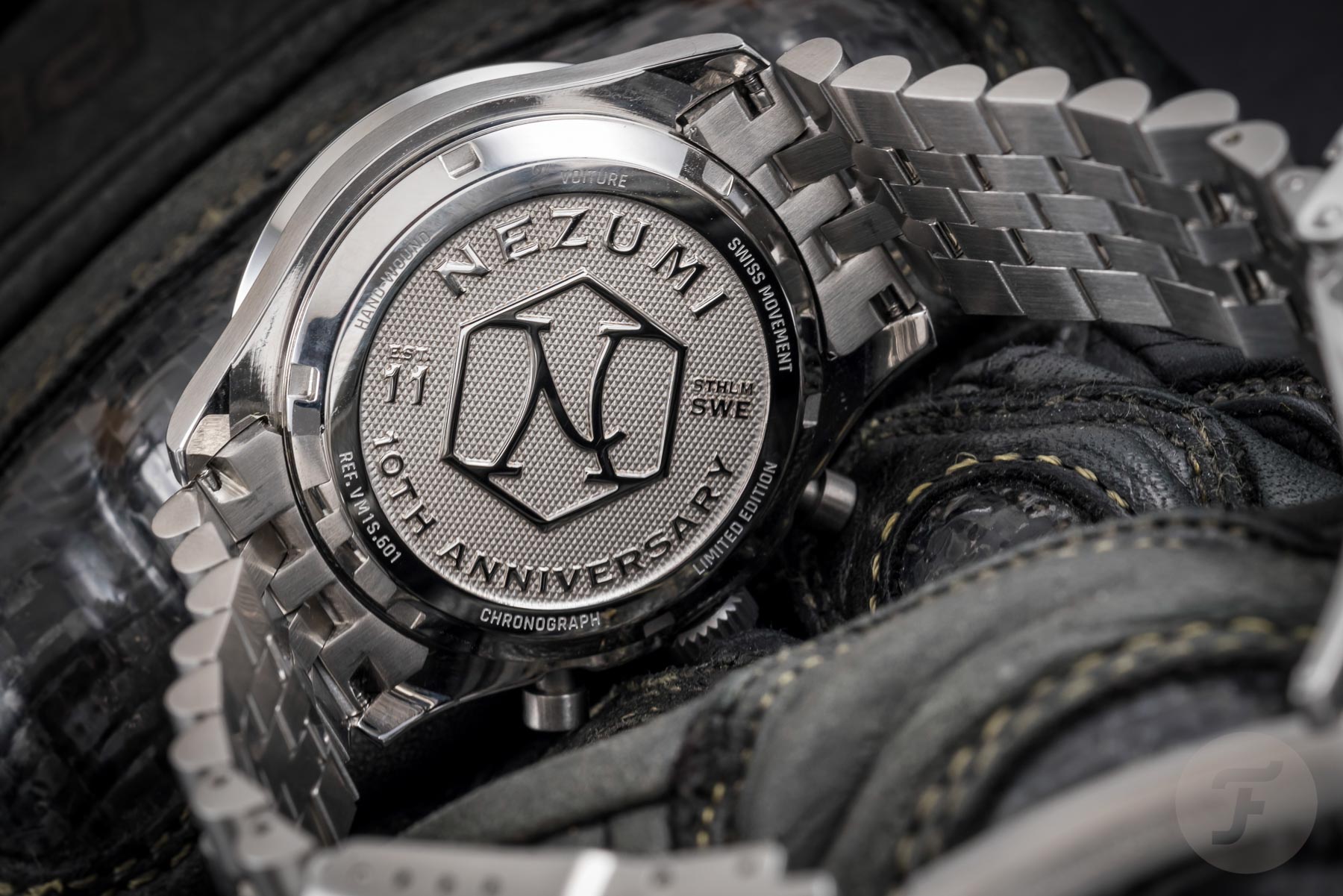 I can be really short and sweet when it comes to my conclusion. I like the Nezumi Voiture ref. VM1S.601 chronograph with its different shades of blue and tasteful retro-style details. It doesn’t try to be anything else but a vintage-inspired watch, and it accomplishes that objective with great ease. Is it worth the €1,679 asking price? Well, for that, you get a very decent 4Hz Sellita chronograph movement, a case that’s water-resistant to 50 meters, and also Swiss C1 Super-LumiNova on the indexes and stick hands. So, from a hardware perspective, the price is also not unreasonable. 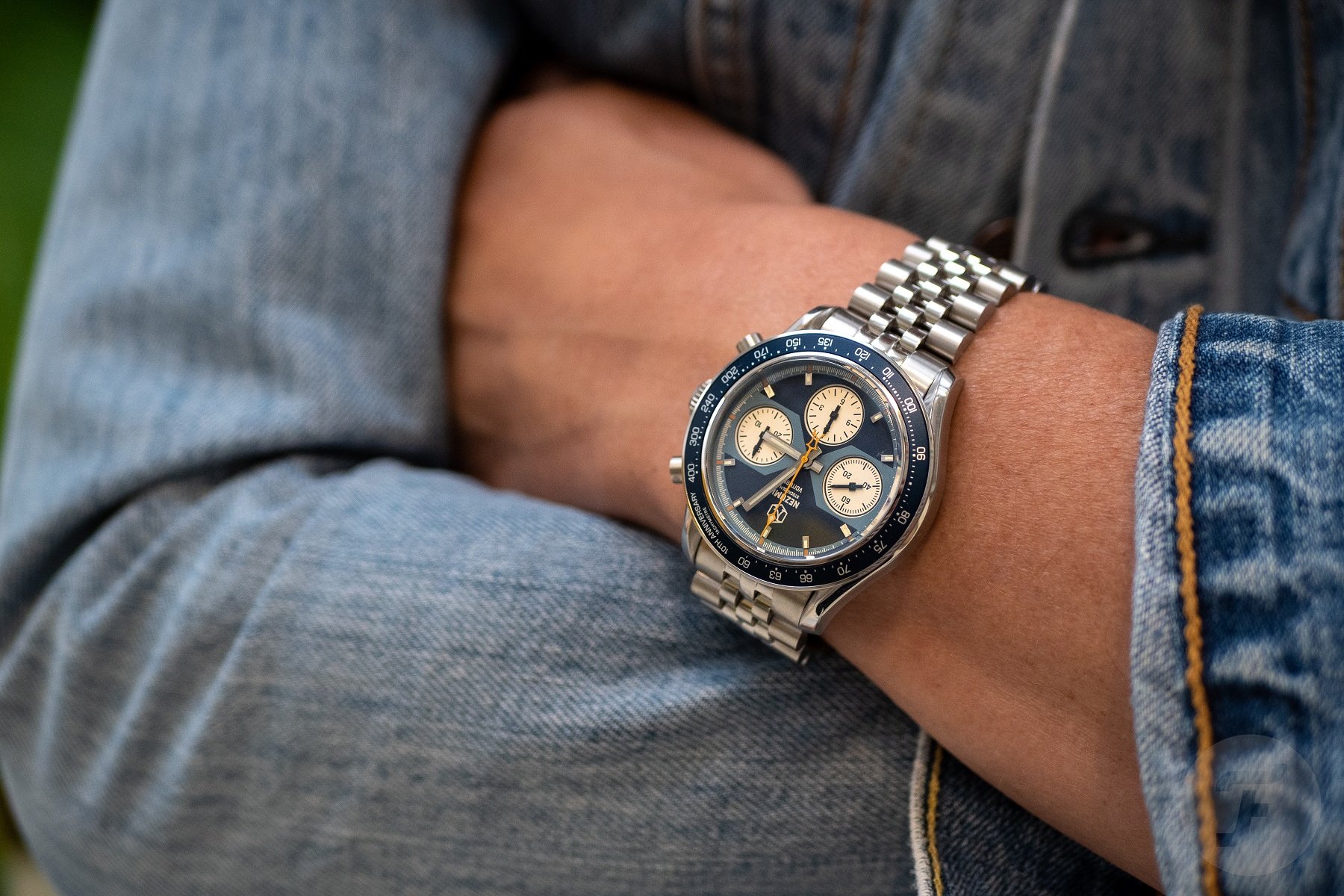 Yes, it may lack a big, prestigious brand name, but you can also look forward to explaining to people that your Nezumi Voiture is designed in Stockholm, built in Germany, and powered by a Swiss engine. And if that’s not enough, it only takes one coincidental encounter with a neurobiologist to instantly validate your decision to go for a Swedish retro chronograph. Not that you need it, though. The mechanical Voiture can handle satisfying you on its own.

Hot Topics
Are You Still After An Omega × Swatch MoonSwatch?
118 comments
Introducing: The Oris Divers Sixty-Five Fratello Limited Edition
111 comments
Introducing: The New Seamaster Professional 300M 60 Years Of Bond — With A Special Animated Case Back
110 comments
Rolex Is Going Certified Pre-Owned
71 comments
Why Do We Cling To The Evergreens From Brands Like Rolex, Omega, JLC, And Cartier?
47 comments
Popular
You Asked Us: Nomos Orion as a dress watch?
Gerard Nijenbrinks
9
Hands-On With The Seiko SLA019J1 Marinemaster
Robert-Jan Broer
4
Watch Brand Ambassadors – Does It Work?
Robert-Jan Broer
7