It’s no secret that we are fans of the eloquent design language of Nezumi Studios. Unfortunately for me, the new 10 Year Anniversary Voiture Chronograph is perfectly timed with my newfound chrono-love. From focusing on clean dialed diver’s watches and petite field-watch cool, the allure of a many-registered dial has proven too tempting.

As a writer for Fratello, I am already used to being ribbed for my lack of a Speedy. My answer to that is coming this year. But now, Nezumi Studios in Stockholm will only cause problems for me, yet again. I am in the middle of consolidating my collection and have already got a taste for the meca-quartz Voiture. Now, that petrol-infused reference has an even more captivating Swiss brother. Not that it makes a huge difference for me, as I’ve already accepted the fact that meca-quartz is great for a daily wearer. This, however, has serious potential to scupper my chances of a less populated watch box. Not only is the new Voiture VM1S trio mechanical, but it’s hand-wound as well. 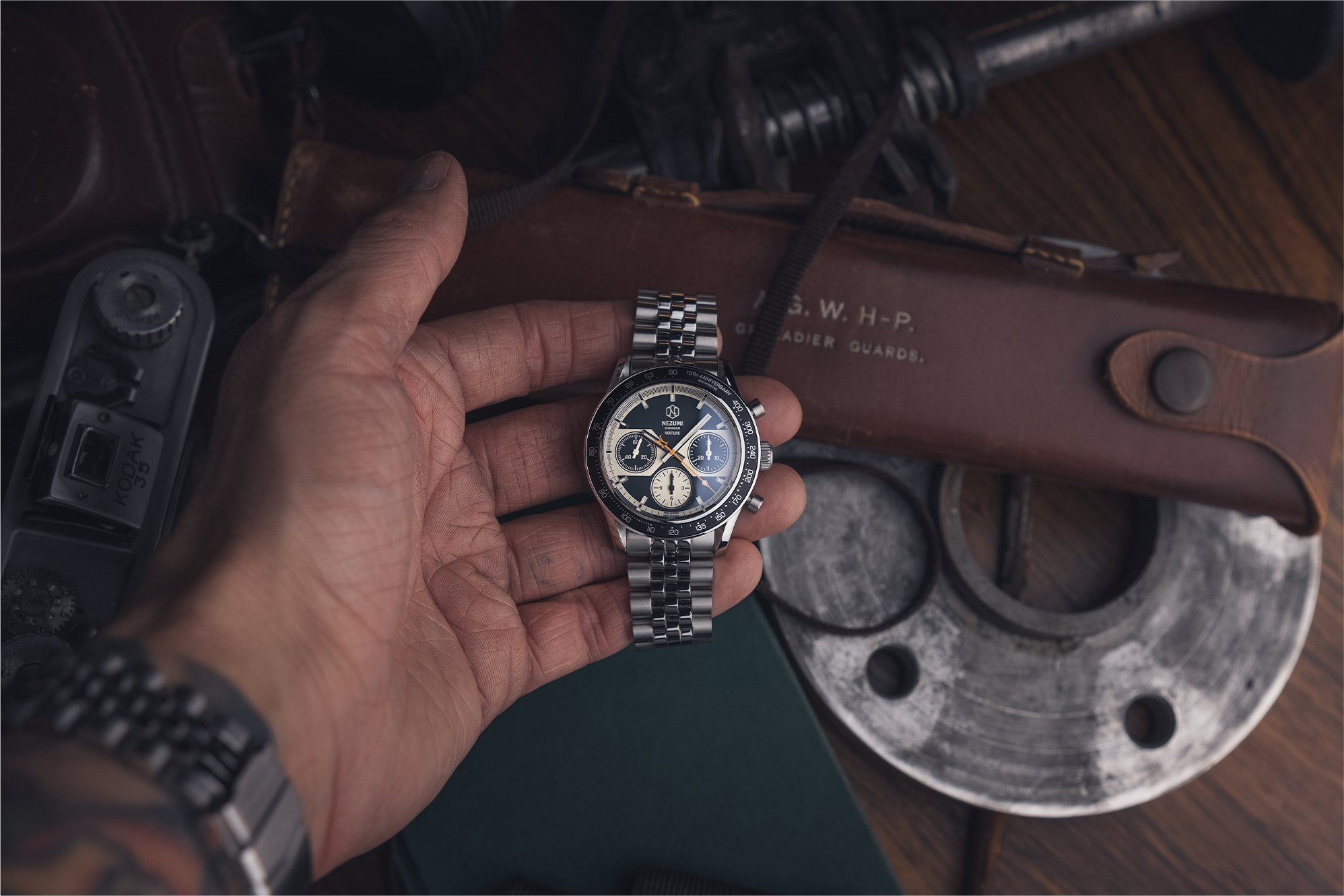 The smell of racing fuel

David Campo, the founder of Nezumi Studios, is a serious petrolhead and a vintage Porsche enthusiast. For anyone with a hint of interest in four wheels, this is obvious in the strong motor-racing clues of the brand’s lineup. For me, this adds spice to an already cool mix of influences born from the late ’60s and early ’70s. How I wish that colorful era of brash dial designs returned! It was a heady time of bold mechanical chronographs from Heuer, Breitling, and oddball Swiss brands like Sicura. Yes, we see reissues like the sweet Top Time from Breitling, but today, the era is kept alive mostly by microbrands. From its Stockholm base, Nezumi Studios delivers an enviable mix of design nous and integrity in design. 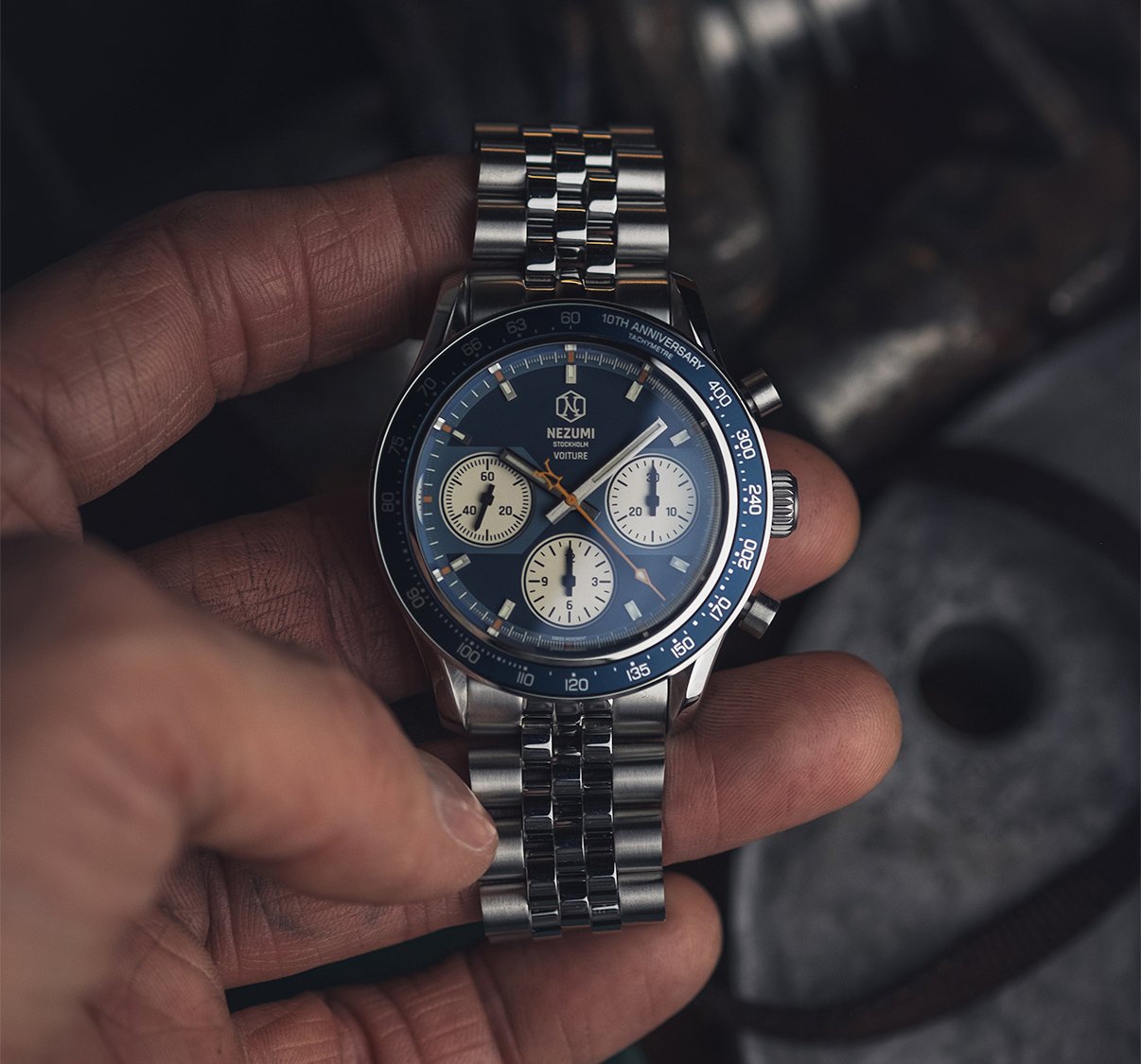 An established homage to the age of cool

The Nezumi Voiture series is an homage to an age of cool, but the watches have developed their own vocabulary. A meca-quartz Voiture is a stonking value at less than €350, with a superb case size of 40mm and an 11.25mm thickness, crystal included. The lug-to-lug hits the sweet spot at 47mm, which sure gets me hooked. My preference is for a balanced and tidy uni-compax layout, as you could tell from my stories last month. But the moody photography of Nezumi gets to me, even if this is a triple-registered affair. And especially with the delights of a jubilee bracelet. Come on, I know it’s a Rolex trademark, but it’s equally been a part of smaller brands like Zodiac, and it’s an extremely comfortable way of securing any watch to your wrist. 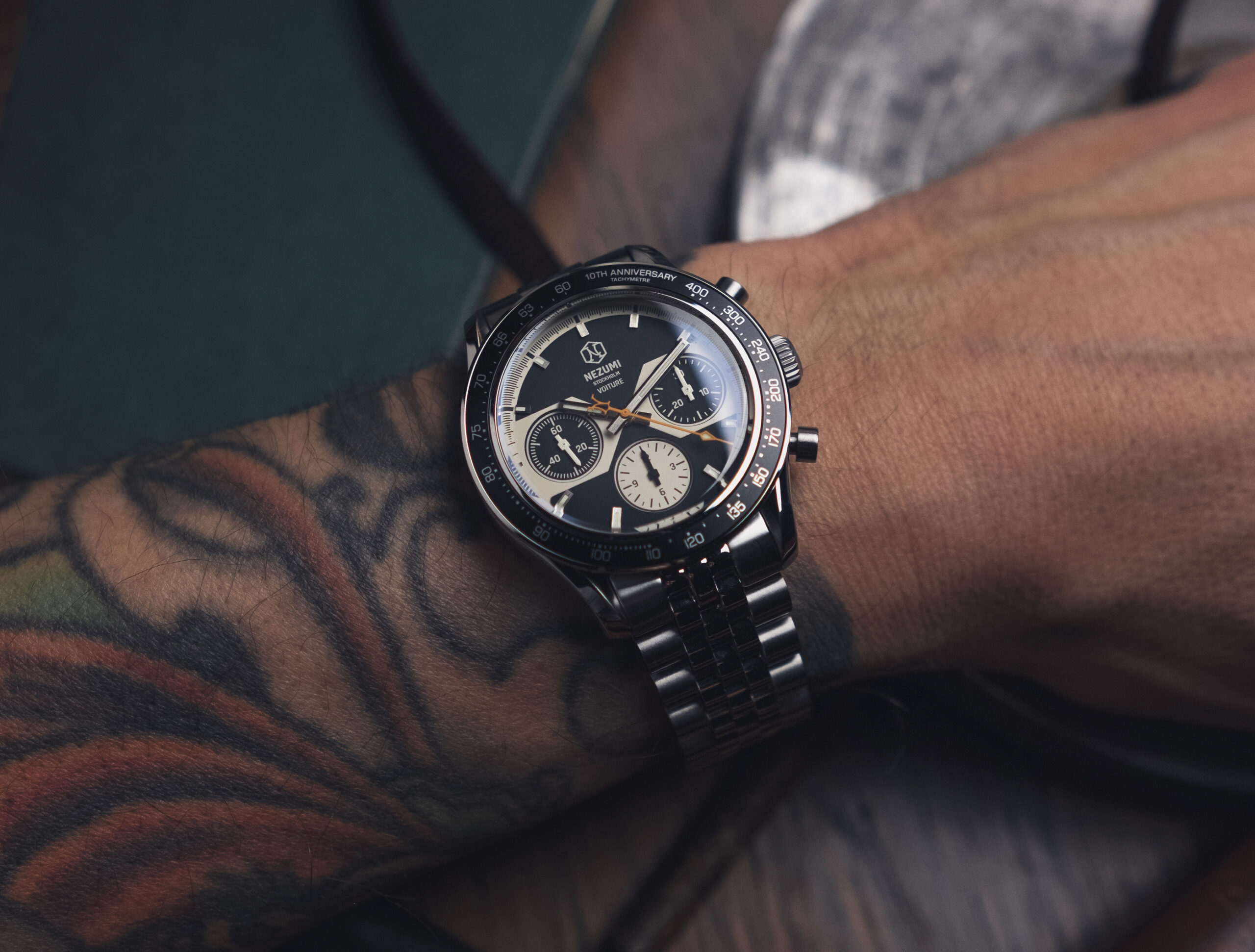 Details that matter in a Goldilocks case

Brushed outer links frame the smaller inner polished sections that make for a silky wrist presence. It’s simply a great way to mark an anniversary where Nezumi is flicking the overdrive button before overtaking several lesser microbrands. I enjoyed Nezumi’s last Voiture on the classic rally strap, and the sharp RUF edition awoke my desire. But this is moving up a big notch, as there is Swiss mechanical movement inside the slim case. That’s right, the 40mm Voiture case is still just right, and still slender at 12.6mm, but different. Under the engraved case back lies the Sellita SW510 Mb, a hand-wound chronograph movement, and it’s a sweetie. The sensation of winding a watch every morning brings a special kind of joy to a watch-obsessed soul. 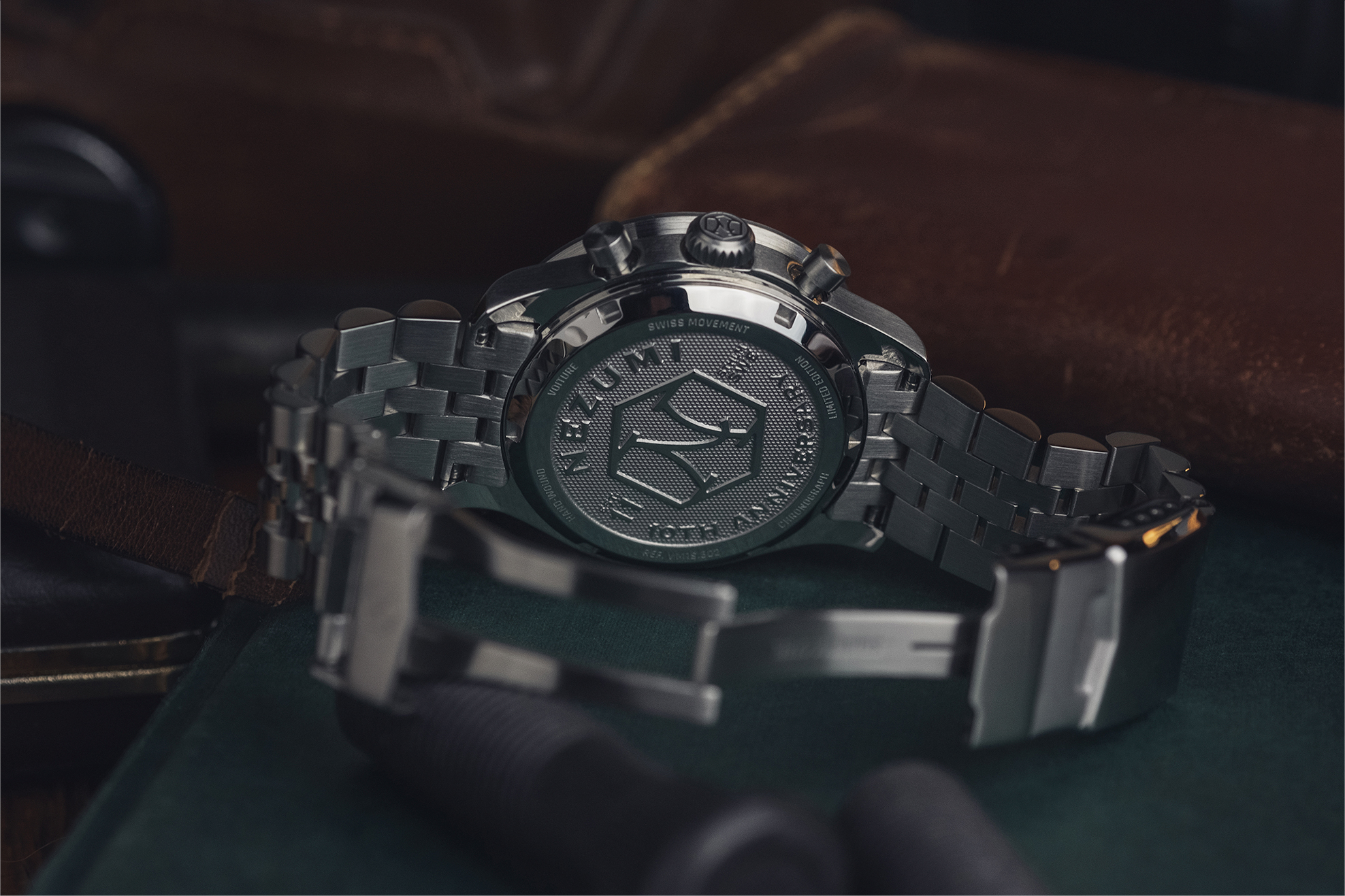 The Sellita SW510 Mb is a doozy

I have another watch with the SW510, and I’d say it gets the vintage vibe just right. Winding the crown elicits a smooth, reassuring solidity, and if my Hanhart 417ES is anything to go by, this will run close to COSC specs. It is a no-date caliber present in more expensive pieces like the Massena LAB Uni-Racer by virtue of its period-perfect feel. I used to be an ETA snob, but that attitude has long since fallen by the wayside. On the pure merit of the subjective feeling of setting the time and winding the crown, for me, Sellita runs equal to ETA, and ditto for the accuracy. Going back to the case, twisted lugs with polished, curved tops make the Voiture comfortably suave. But let’s be honest. I’m here for that Zorro-esque dial and the racing tachymeter. 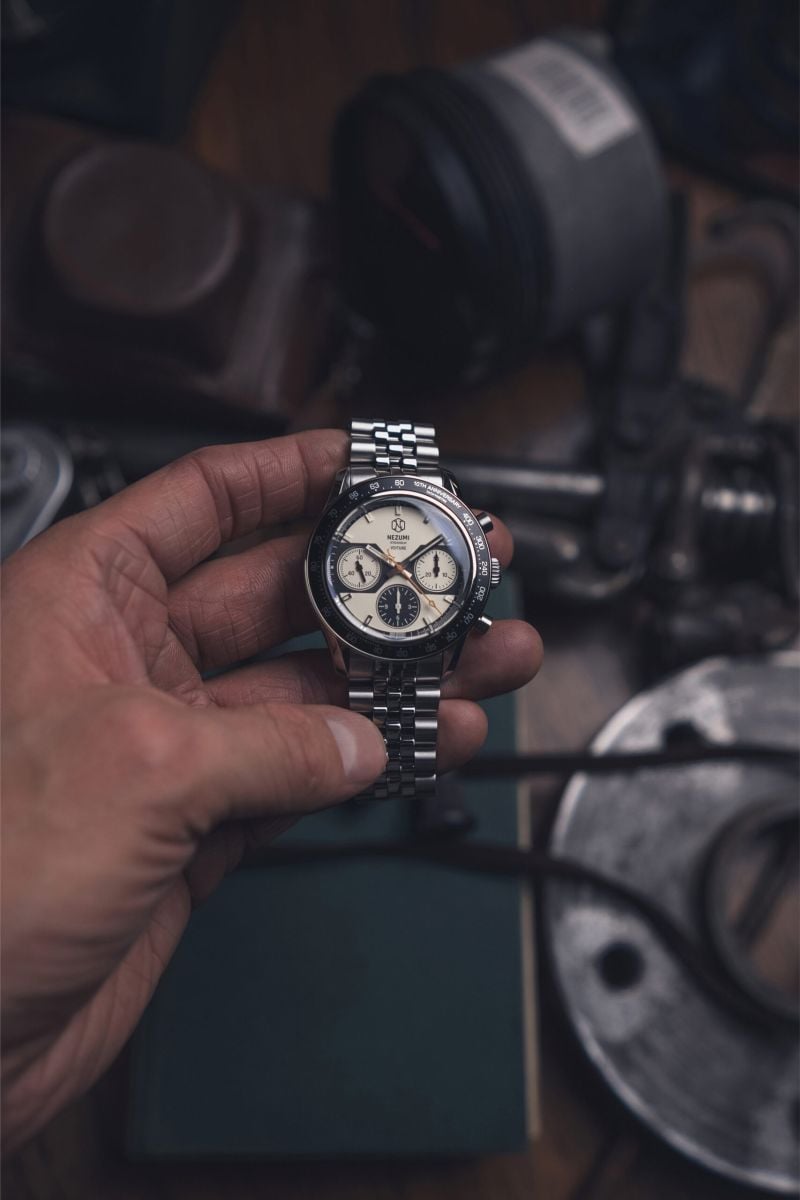 Are you too shy for a bold dial? Not everyone loves the dramatic graphics of the Voiture dial architecture, but I find it captivating. I am colored by my love of classic cars and the smell of oil and petrol, which infuse this chronograph. But what sets the Nezumi 10 Year Anniversary Voiture Chronograph apart from their established Voiture?

Not everyone loves the dramatic graphics of the Voiture dial architecture, but I find it captivating.

There is a slightly increased thickness of 12.6mm with a 1.9mm domed crystal. This is pretty slim for a mechanical chronograph, and that’s one of the benefits of the Sellita SW510 Mb caliber. Manual-wind means slimmer, and in this case, perhaps even svelte. Quite a few chronos out there have a 15-16mm thickness and sloping, swoopy lugs don’t help that much when the case back protrudes several millimeters. Here, the comfort is still present with the zen feeling of hand-winding. 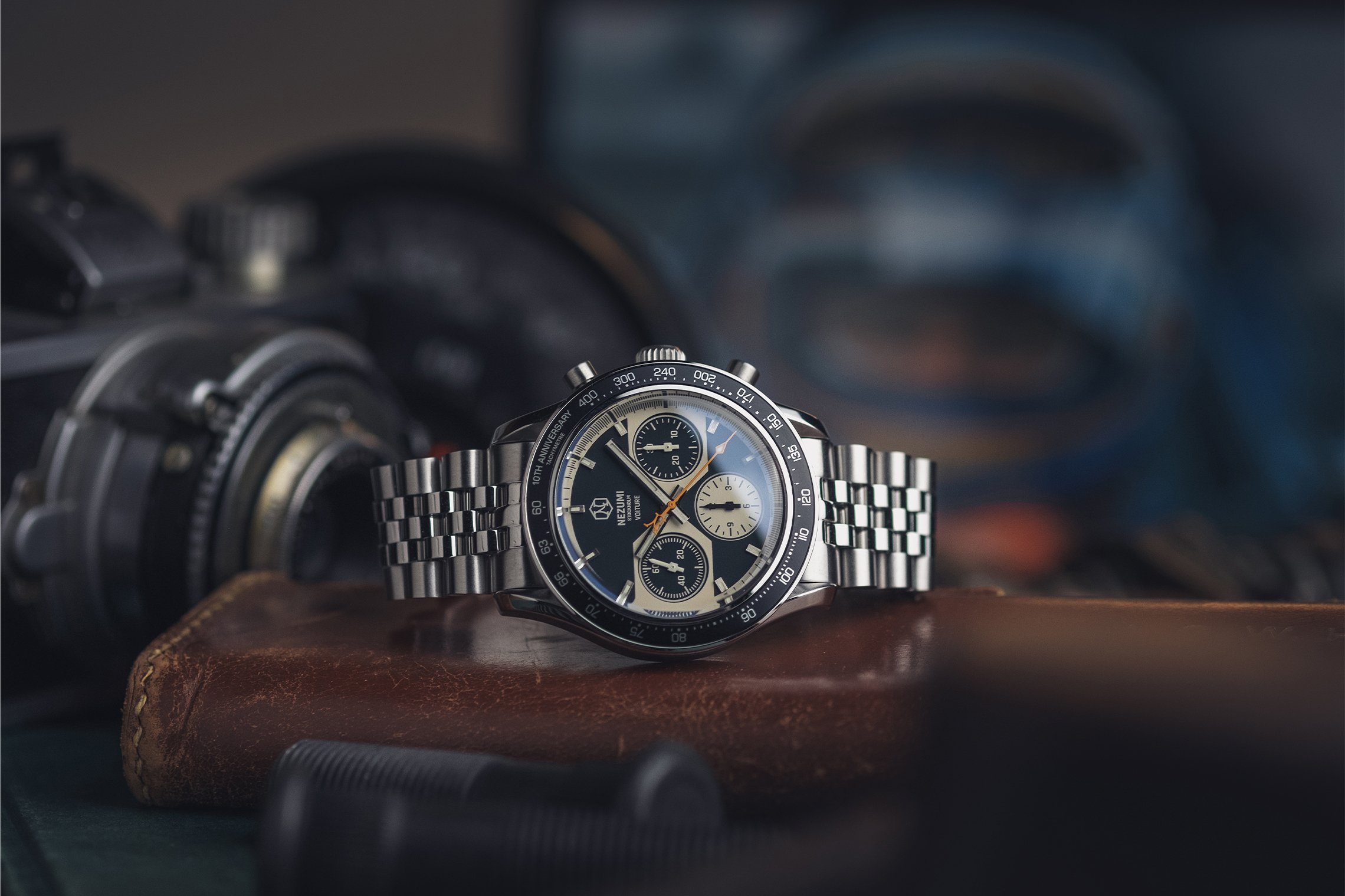 The dial looks nearly the same as any Voiture. The sharp Zorro-mask print is still here, as are the cool registers with their blocky pointers. But look closer. Gone is the 24-hour counter at 3 o’clock that marks any meca-quartz, replaced by a more functional 30-minute counter, and an hour counter at 6 o’clock. Small seconds remain at 9, and the dial is remarkably balanced and mature (Breitling et al, take note). One of my favorite details is the matte bezel insert with its well-judged mid-century font. Here, the tachy comes with 10th Anniversary text at 1 o’clock, and each of these 300 watches is individually numbered. 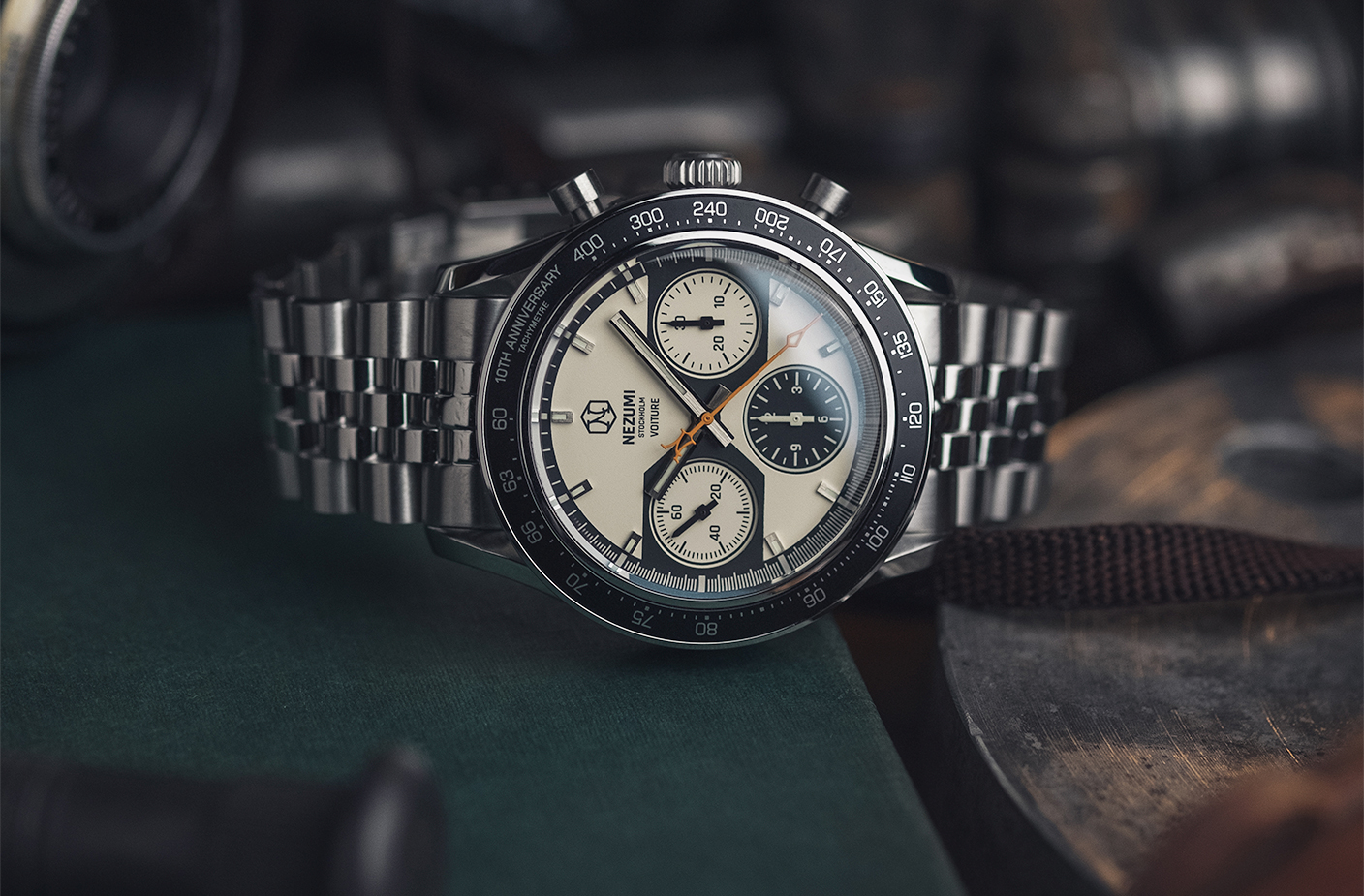 My favorite touch of orange

Whether you find the moody black, the sleek creamy white, or the blue dial with a matching bezel to your taste, all the variations have my favorite touch — that chronograph seconds hand. The world is filled with anonymous white or silver needle second hands, but this is a whimsical delight. The ornate Nezumi N from the hexagonal logo at 12 o’clock is repeated in a charming counterweight, and on all three models, it gives off a pop of smooth orange zest.

The only question you might raise is the substantial price hike. While a meca-Voiture will set you back less than €400, this 300-piece limited edition comes close to €1,700, taxes included. Is that too much? Well, not really. I have a deep respect for David Campo of Nezumi Studios for not compromising. 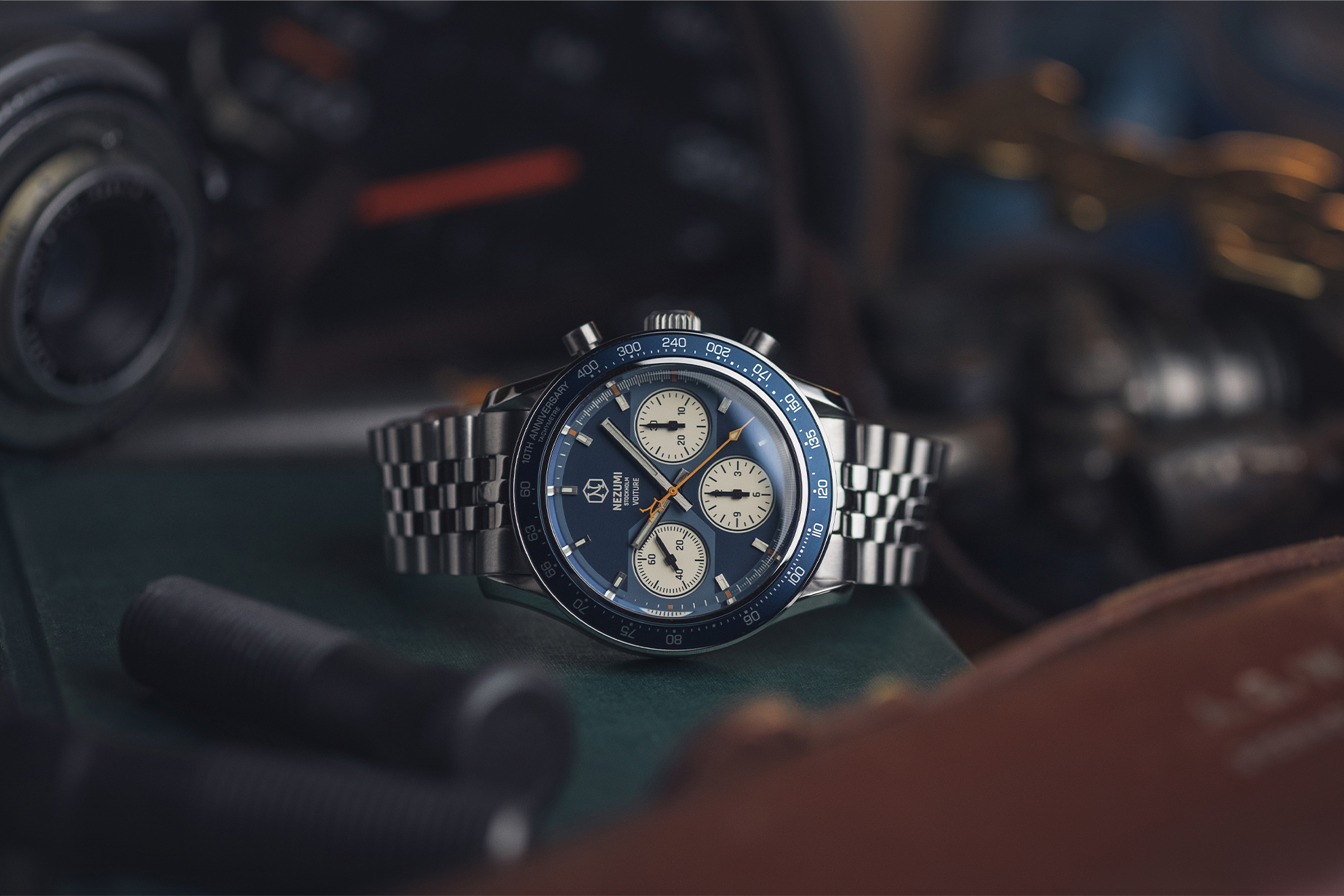 A limited piece of mechanical temptation?

Nezumi Studios could have opted for a less expensive non-Swiss caliber, but the brand held out for the best solution. The Sellita SW510 Mb has 23 jewels and 58 hours of power reserve, and the watches are assembled in Germany. At the price of SEK 14,800, which is around €1,396 + tax, this is less than the Farer Bernina and half the price the Massena LAB Uni-Racer. Why those two? Well, they both have a Sellita 510 and were duelists in my story here, so feel free to compare. Personally, I like the Nezumi Voiture a lot. Nezumi has moved both the Voiture model and itself as a brand up a serious notch with this release. Check out the Nezumi website if you want to be notified of the launch of the 10 Year Anniversary Voiture Chronograph on March 4th.

How about you? Are you a meca-quartz fan ready to upgrade? Or are you too wrist-shy for the mask of Zorro? Let us know in the comments.

Hot Topics
Introducing: The Omega Speedmaster Super Racing With Spirate System
165 comments
Design Vs. Specs — Which Is More Important To You When Buying A Watch?
87 comments
New Release: The Limited-Edition Seiko Prospex SLA067J1 Diver
63 comments
My Predictions For New Omega Speedmasters In 2023
58 comments
The Best Independent/Microbrand Alternatives To The Rolex Explorer In 2023
52 comments
Popular
Grand Seiko SBGA211 ‘Snowflake’ And Why I Didn’t Buy It
Robert-Jan Broer
23
New Hamilton Intra-Matic Auto Chrono – An Introduction (with live pictures)
Balazs Ferenczi
13
You Asked Us: Nomos Orion as a dress watch?
Gerard Nijenbrinks
10