Color has always been something NOMOS Glashütte deploys with the kind of verve it’s hard to teach. It may seem almost counterintuitive that one of the Bauhaus style’s foremost proponents has such a reputation, but, as with everything worthwhile in watchmaking, it is the subtle applications of flare that can turn a simple piece into a showstopper. The new NOMOS Glashütte Club Campus models in Absolute Gray and Future Orange are perfect examples of that.

If you’re looking for a classy, timeless dress watch, you could do much worse than to start your search with NOMOS. Similarly, if you want something vivacious and fun, the German manufacture has you covered also. How NOMOS has established itself as a master of subtlety and the color spectrum beggars belief. And yet, even in the brands most traditional models, deftly deployed flashes of color have played their part. That’s been true from the get-go, and now, three decades after its foundation, the plucky underdog is getting more and more comfortable flexing that ability with every passing release. 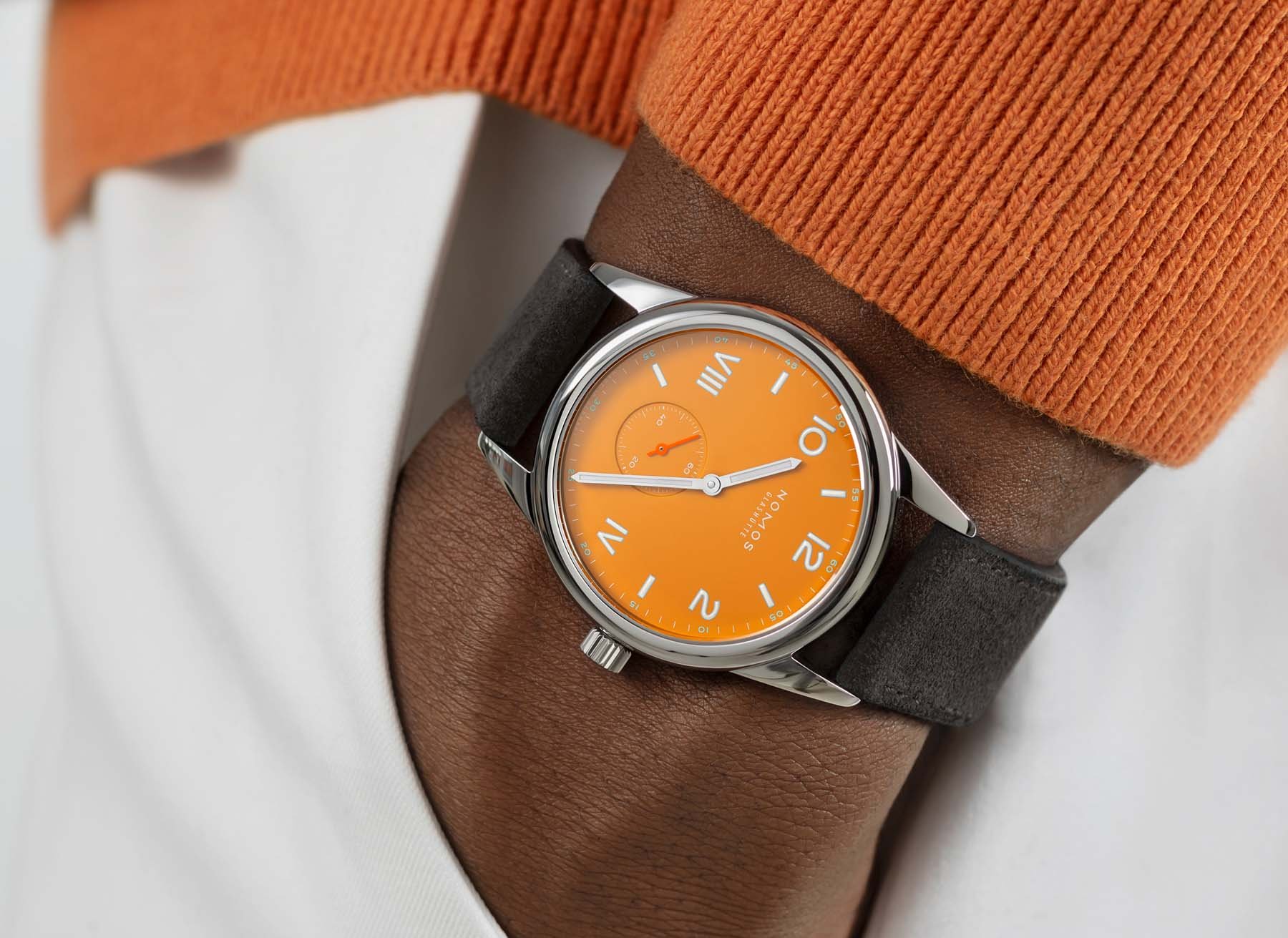 Don’t sleep on the early blue

When NOMOS Glashütte debuted the Tangente, Orion, Ludwig, and Tetra models in the early ’90s, you could have been forgiven for thinking color played no part in those releases’ subsequent success. But set against the silvered dials that have come to define the brand’s core range, were heat-blued hands that brought the watches to life in natural light. 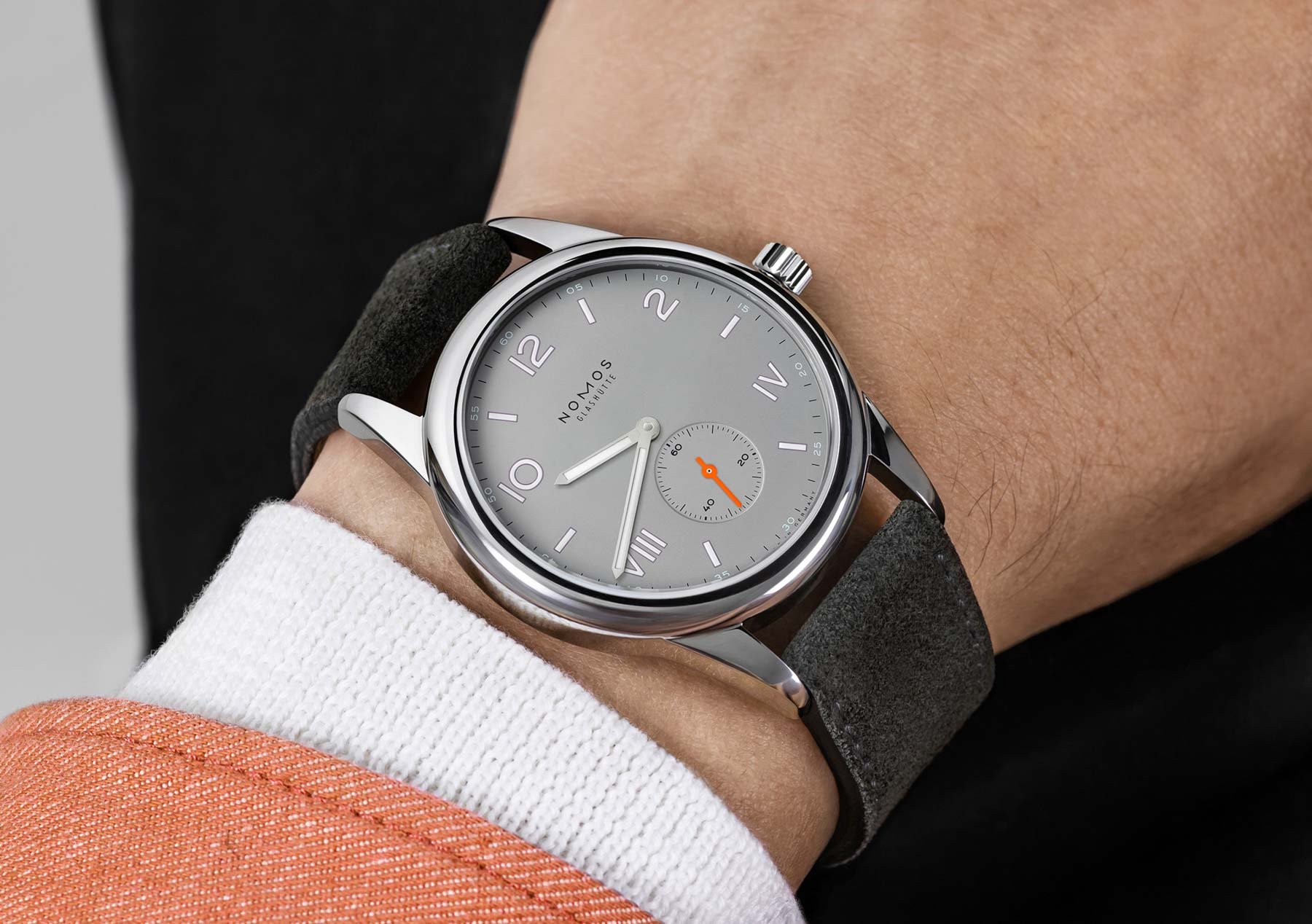 Browsing through the NOMOS catalog has never been the best way to experience these watches. Rarely, is that true of any brand. However, with NOMOS Glashütte’s watches, the difference between their appearance on paper and their appearance on the wrist is stark. In fact, I would go as far as to say there are few watches as surprising as those produced by NOMOS when they are first tried on. The interplay of the surface finishes — the grainy silver-plated dials and the polished blue hands of the traditional models — makes for a constantly shifting and endlessly enthralling wearing experience. 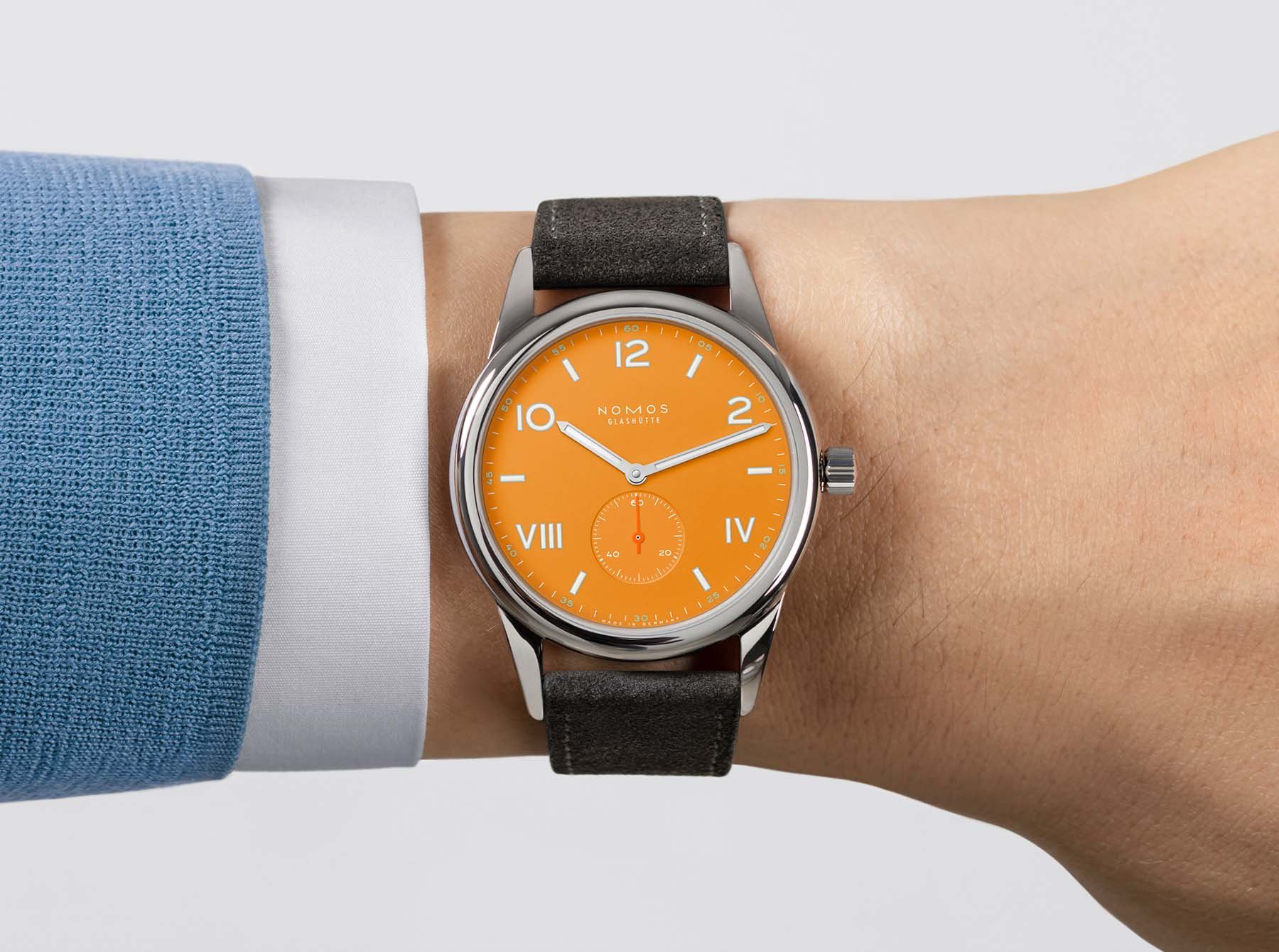 If these elements and the way they combine with one another seems like a small thing, you would be right. But so is an escape wheel. So is a pallet fork jewel. So is everything that matters in watchmaking. Details and their execution are everything. A brand must first master these nuances before it can move onto bigger (and much brighter things). NOMOS earned its stripes the hard way. Now, it would seem, the gloves have come off. The new additions to the Club Campus 38 line are fizzing examples of that. This is a sign of a mature company having some fun with the cache of respect it garnered through hard work and patience. And we, lucky watch fans that we are, get to enjoy them in all their radiant glory. 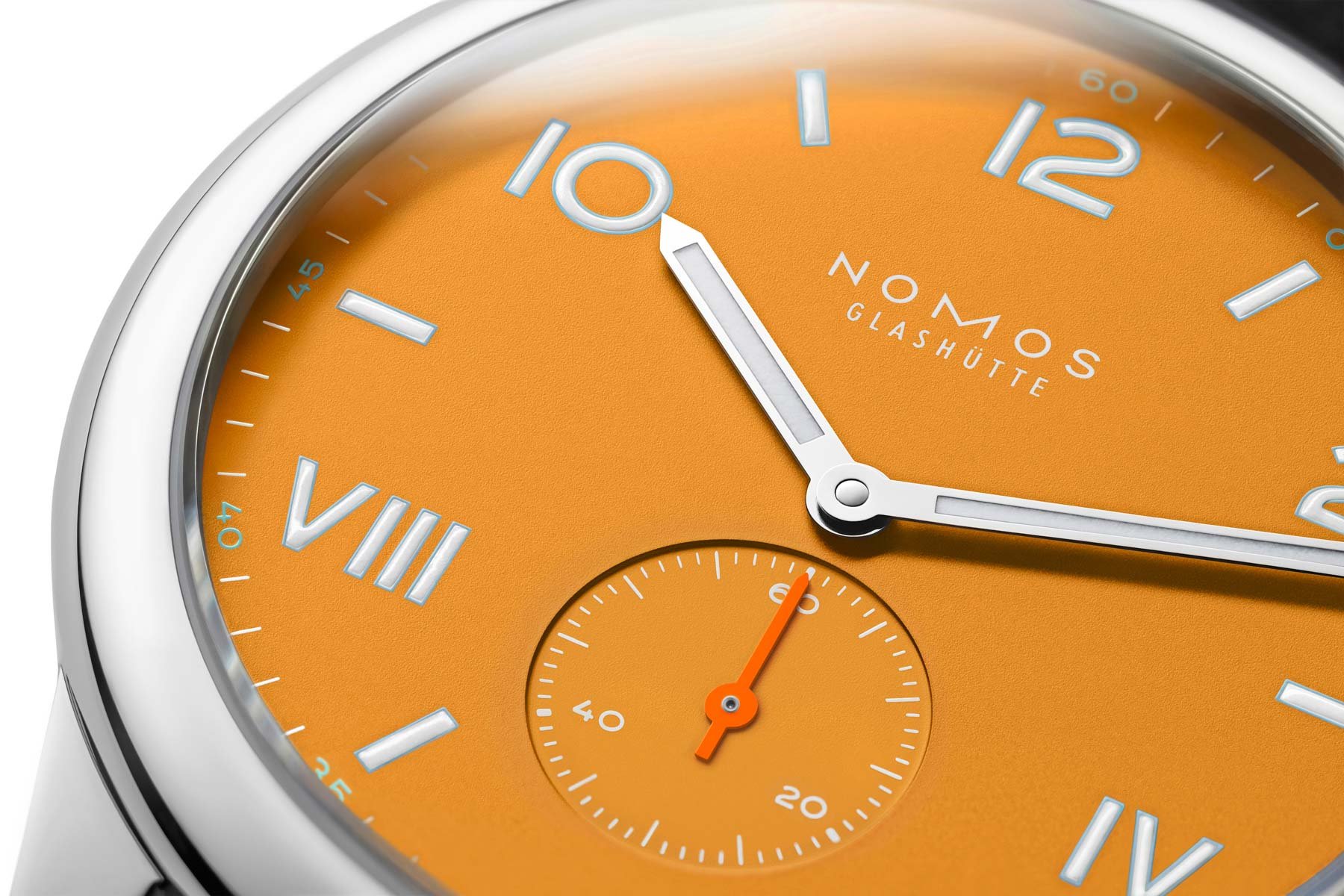 For anyone that remembers the old British cellphone network Orange, that slogan will be permanently seared on your brain. While it didn’t end up ringing true for the now extinct operator (after merging with T-Mobile UK to form EE), it certainly could for this typically frivolous pair. The Club family has always been the perfect canvas for expression. Ever since it launched, the Campus has had the reputation of the brand’s most youthful line. Its chunkier, curvaceous font and case coupled with its accessible price tag made it the ideal gateway drug to luxury watch collecting.

In very recent times, NOMOS has really pushed the color boundaries with the Club’s Campus offshoot family (distinguished from the regular Club by the Roman numerals at 4 and 8 o’clock). Last year saw the almost immediately sold-out Pride-inspired limited edition for Cool Hunting. We saw a rainbow of colors debut in runs of just 22 pieces per shade. They were gone in minutes. NOMOS must have taken that as a sign that the Campus and Colors go together like orange slices and half-time (obligatory Rob Nudds sports reference alert). 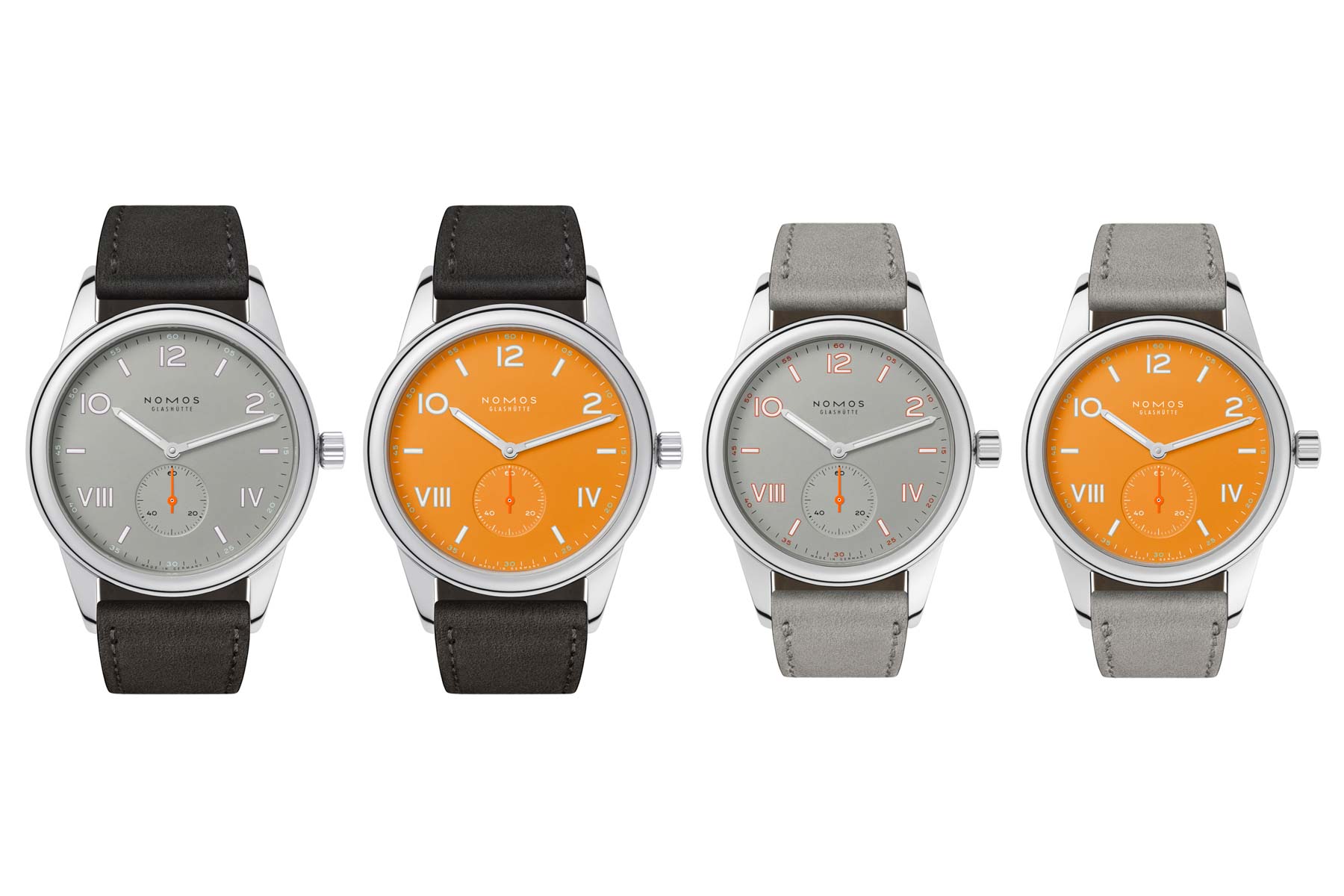 More grays than meets the eye

So while there may only appear to be two watches on offer here, there are actually four. There are two each of the typical Club Campus sizes. We have a pair in 38mm and a pair in 36mm. While the colorways of the Future Orange watches are identical across sizes, there is a subtle difference between the 38mm gray and the 36mm gray. I would assume this is because NOMOS has itself identified that the 38mm gray is “clearly” intended for a male audience, while the 36mm gray is more “female”, whereas both orange watches are so vivid and special that they transcend typical gender definitions and exist as pure unisex options.

The larger gray model has slightly darker gray outlines for the numbers. In contrast, the 36mm Absolute Gray model has the numbers outlined in orange. The five-minute numerals on the larger model are printed in what looks to be the same very pale “mint” used for the same numerals and all outlines on the Future Orange dials, while the smaller model has the five-minute markings printed in a slightly darker orange. Amazingly, for such tiny changes, the overall effect is quite noticeable. What can I say? That’s NOMOS for you!

Which NOMOS Glashütte Club Campus should you buy?

I think if this colorway drop appeals to you right off the bat, it is hard to make a bad choice in the end. I like all of the models very much. My personal preference being a small-wristed chap (16.5cm) would be the 36mm diameter. I already own the standard Club Campus 36mm and I wear it more than my 38mm Amsterdam Limited Edition because I find the size to be very versatile. I actually think my favorite of the three colorways displayed here is also the one found on the 36 Absolute Gray. While I find the 38mm Gray very cool, it is easily the iciest visage of the three. It’s a super professional-looking watch that has the silhouette to work well in a dressed-down environment also.

The Future Orange dials are sharp, for sure. These watches go with nothing and therefore everything, which will appeal to a lot of people. Personally, I like the crispness and yet quiet warmth of the 36mm Absolute Gray, but which do you, the Fratelli, prefer? Let us know which of these in-house alpha-caliber-driven watches you would pick in the comments section below. The German retail price of these beauties is €1,200 for the 38mm models and €1,100 for the 36mm pieces. That represents a premium over the standard models of exactly €0. Nicely done, NOMOS. Learn more here.

Hot Topics
RJ’s Top Five Alternatives To The Omega Speedmaster Professional
96 comments
We Need Luxury Solar-Powered Quartz Watches From Rolex, Omega, Breitling, And Grand Seiko
84 comments
The Omega Speedmaster On The Big Screen — Watch Spotting At The Movies
69 comments
Above And Beyond: When And Why Paying Over Retail For A Watch Makes Sense
63 comments
The King Seiko Collection Debuts With Incredibly Wearable Watches
56 comments
Popular
Top 10 Rolex Watches – Overview of Models Favoured By Our Readers
Fratello
17
Hands-On With the Seiko Prospex SRPC91K1 – Save The Ocean
Robert-Jan Broer
14
Why Are There No Stainless Steel Rolex Watches Available?
Robert-Jan Broer
116