When NOMOS Glashütte first began selling watches in the early ’90s, few would have predicted the brand’s longevity and growth. After a stellar first decade, during which it witnessed the rebirth of hometown heroes like Glashütte Original and A. Lange & Söhne, NOMOS was already regarded as a stalwart of German watchmaking. And now, 30 years into life as a cornerstone of the craft, NOMOS Glashütte is better prepared than ever for its next 30 years.

The first time I ever had the chance to talk to NOMOS Glashütte‘s representatives in person was at SalonQP in 2015. The passion for the brand and its products was palpable. I’d rarely been as impressed as I was then. Listening to the young, engaged, vivacious team talk about technical developments was unusual and inspiring.

At that time, NOMOS Glashütte had just announced the DUW 3001 neomatik caliber. It is an ultra-slim, highly efficient movement measuring just 3.1mm thick. Most importantly for NOMOS, however, is the fact it was 95% in-house. 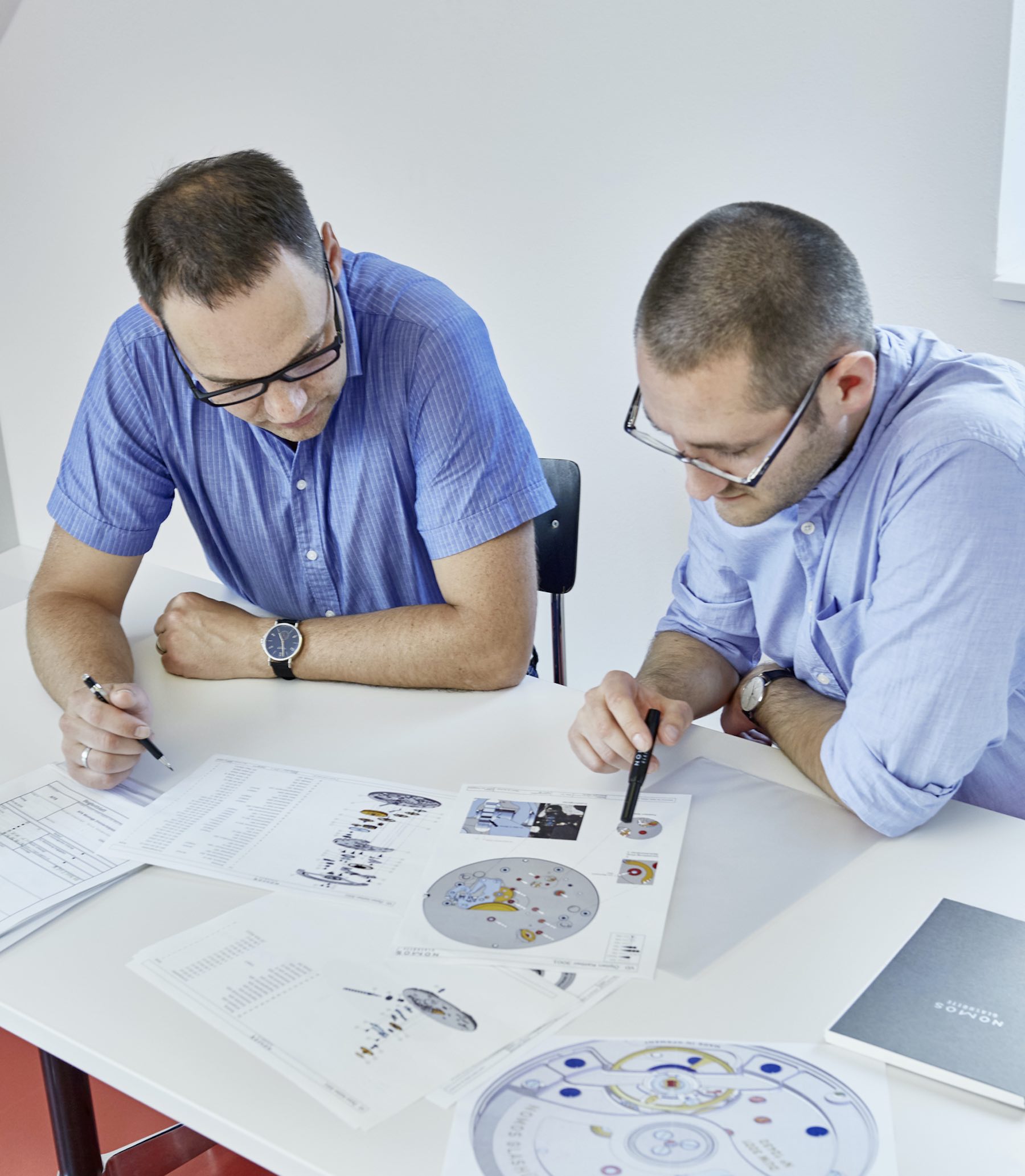 Since the turn of the millennium, NOMOS Glashütte has been pushing hard for absolute independence. It was a move that few could have expected. It was award-winning design for which most people knew the brand. True nuts-and-bolts watchmaking was the preserve of the older, more established Maisons. But NOMOS had different ideas. Perhaps motivated by the increasingly hostile attitude of suppliers in those days, the independent Saxon brand starting working on bringing as much of the production process as possible under one roof. 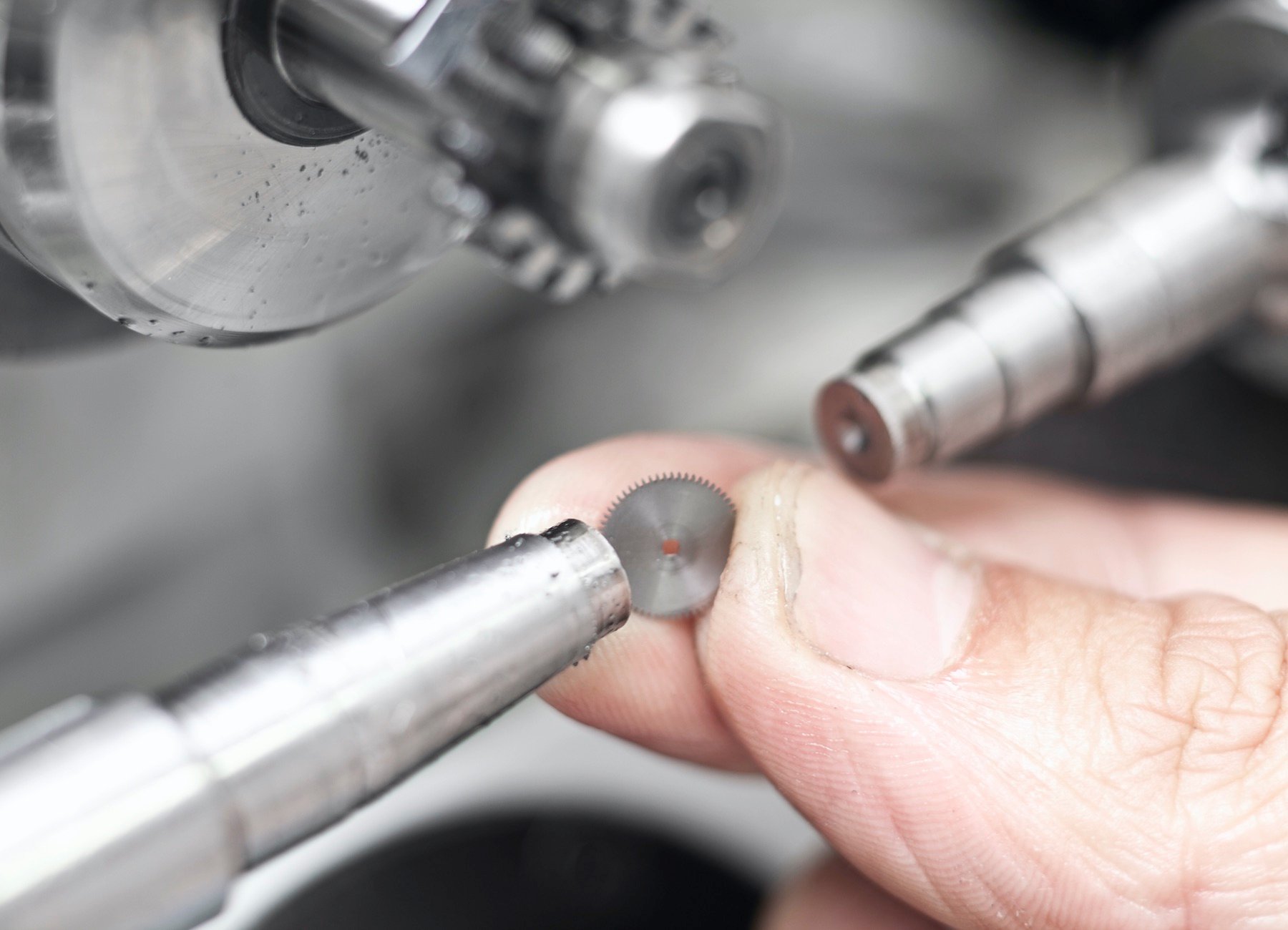 In-house movements followed. The script was starting to be rewritten. For a decade, NOMOS Glashütte retooled and redesigned its existing calibers adding a neat GMT function to its automatic base along the way. And then, in 2015, just before I ran into NOMOS in the Saatchi gallery, the neomatik caliber series was launched with the DUW 3001 movement. It was, to say the least, a stirring statement of intent.

What was surprising about the movement (aside from its slimness) was the fact it was entirely new. It wasn’t based on anything. Understandably, it was inspired by plenty of existing movements and zeroed-in on what the optimum performance specifications for a slimline automatic movement should be, before attempting to better them all. The 3001 was the opening salvo of a new era. An in-house automatic era that retained the design language of NOMOS Glashütte’s early days. 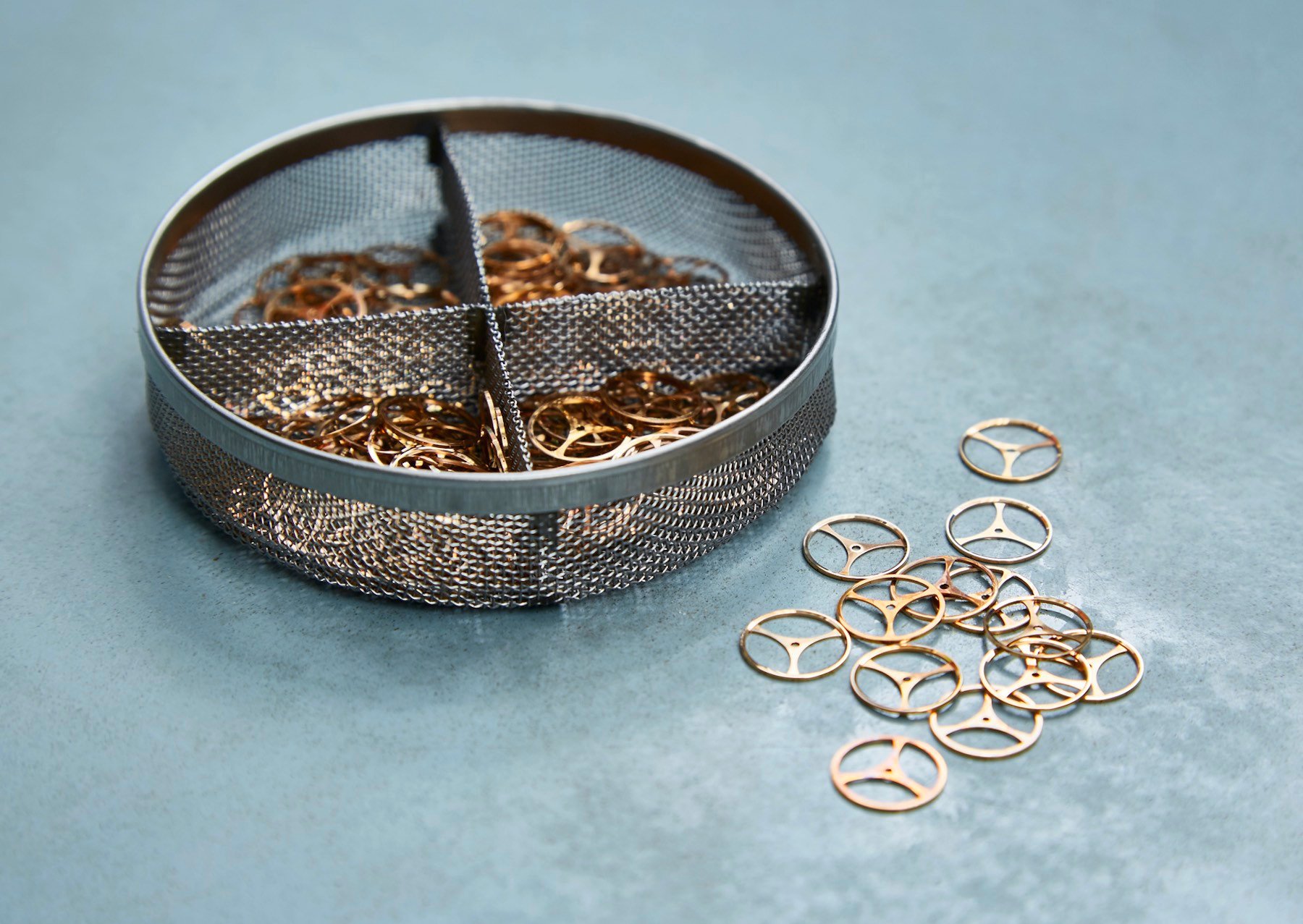 A perfect time to celebrate time

Case in point: 175 years ago, watchmaking arrived in Glashütte. Ferdinand Adolph Lange set-up shop and set about defining an internal and external aesthetic that still resonates today. To celebrate this milestone, NOMOS has selected perhaps its most classical model, the Ludwig.

Three new Ludwig models, each produced in limited runs of 175 pieces, have been released. Each model featured a different movement. A 35mm version is powered by the brand’s most basic caliber — the hand-wound alpha — while the 39 and 41mm versions both feature movements from the neomatik family. The 39mm model is powered by the DUW 3001 from 2015, while the 41mm date (which I had the chance to go hands-on with here), utilizes the latest movement from the brand, the DUW 6101. 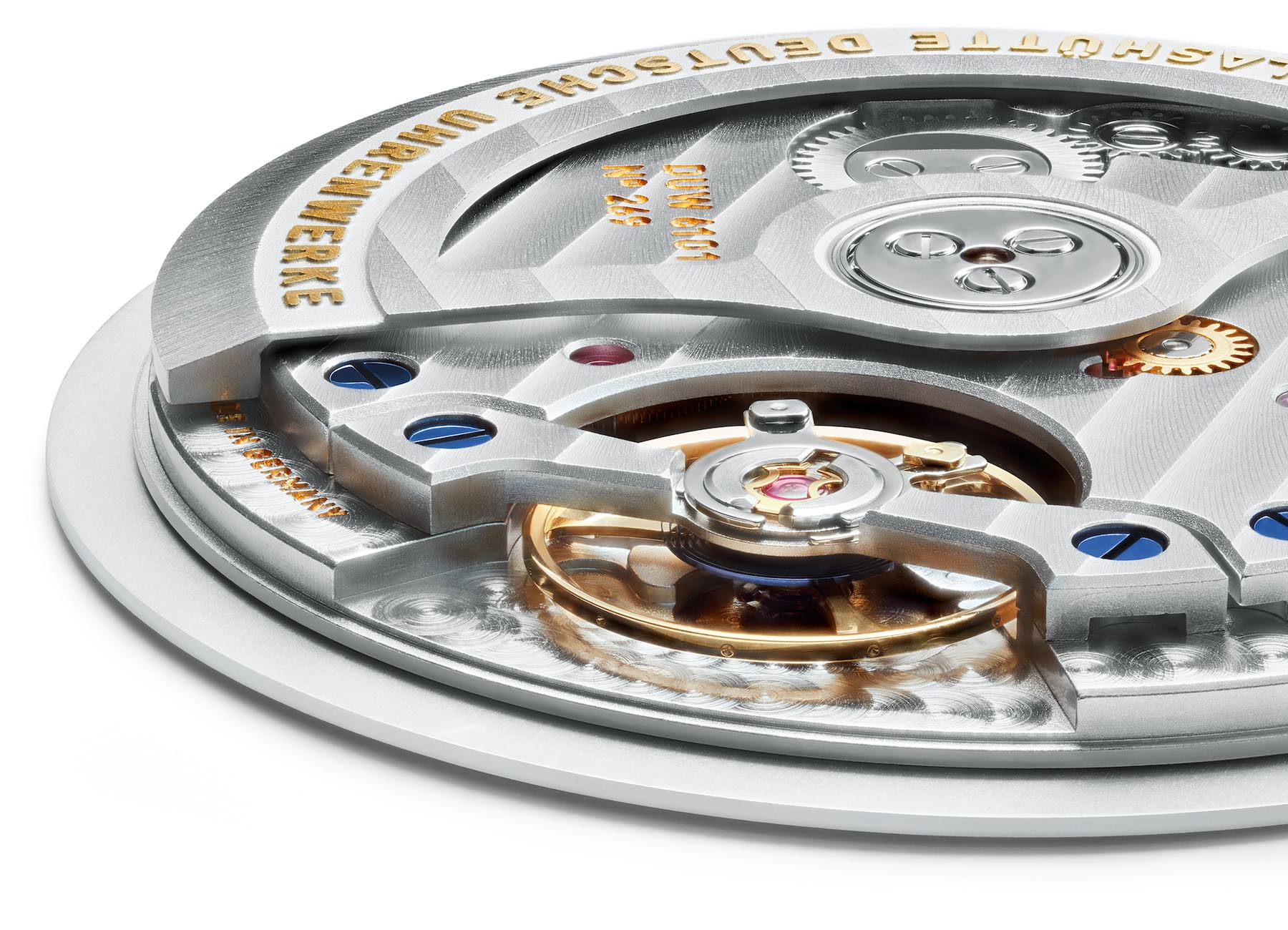 Aesthetically, the design of the Ludwig dial (especially with the addition of leaf-shaped hands made of polished and blued steel set against an enamel-white background for the limited edition) is reminiscent of the early pocket watches for which Glashütte watchmakers first became famous. This link to the past in what is otherwise an intensely modern timepiece is tough to achieve. It is a balancing act that NOMOS is becoming ever more proficient at striking. 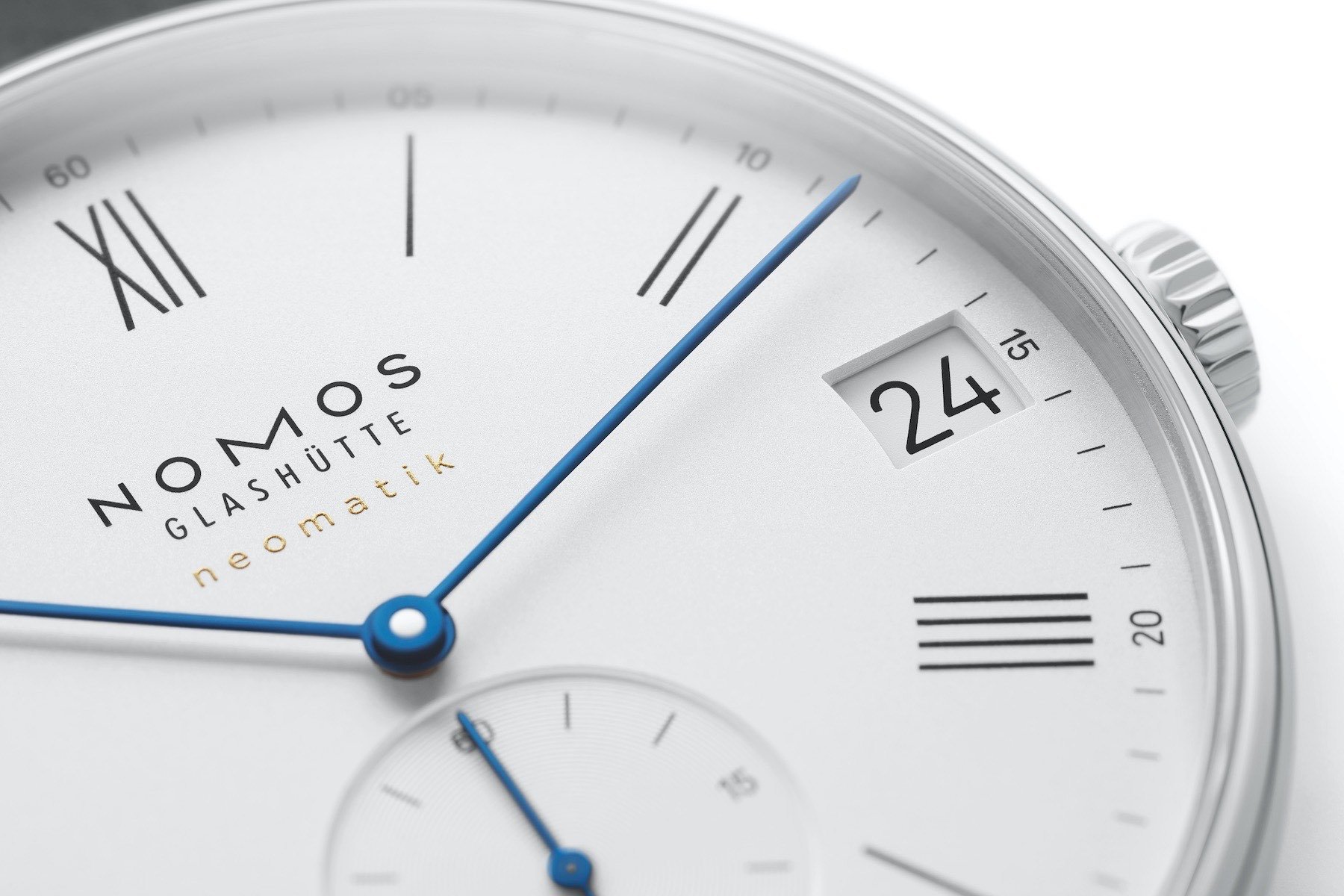 Although those pieces are incredibly limited, NOMOS also makes core collection counterparts (with more contemporary stick hands and an Arabic date window for the 41mm version).

The incredibly large date window only made possible by the massive amount of space within that window made possible by the exceptionally wide date wheel of the DUW 6101. In fact, the date wheel of the 6101 is so big, it overhangs the edge of the caliber itself! Consequently, watches powered by the 6101 have a very contemporary presence. Quite unbelievably, however, the 3.6mm thick neomatik date caliber, which can be quick-set in both directions, ensures the Ludwig 41mm neomatik date is just 7.7mm thick… 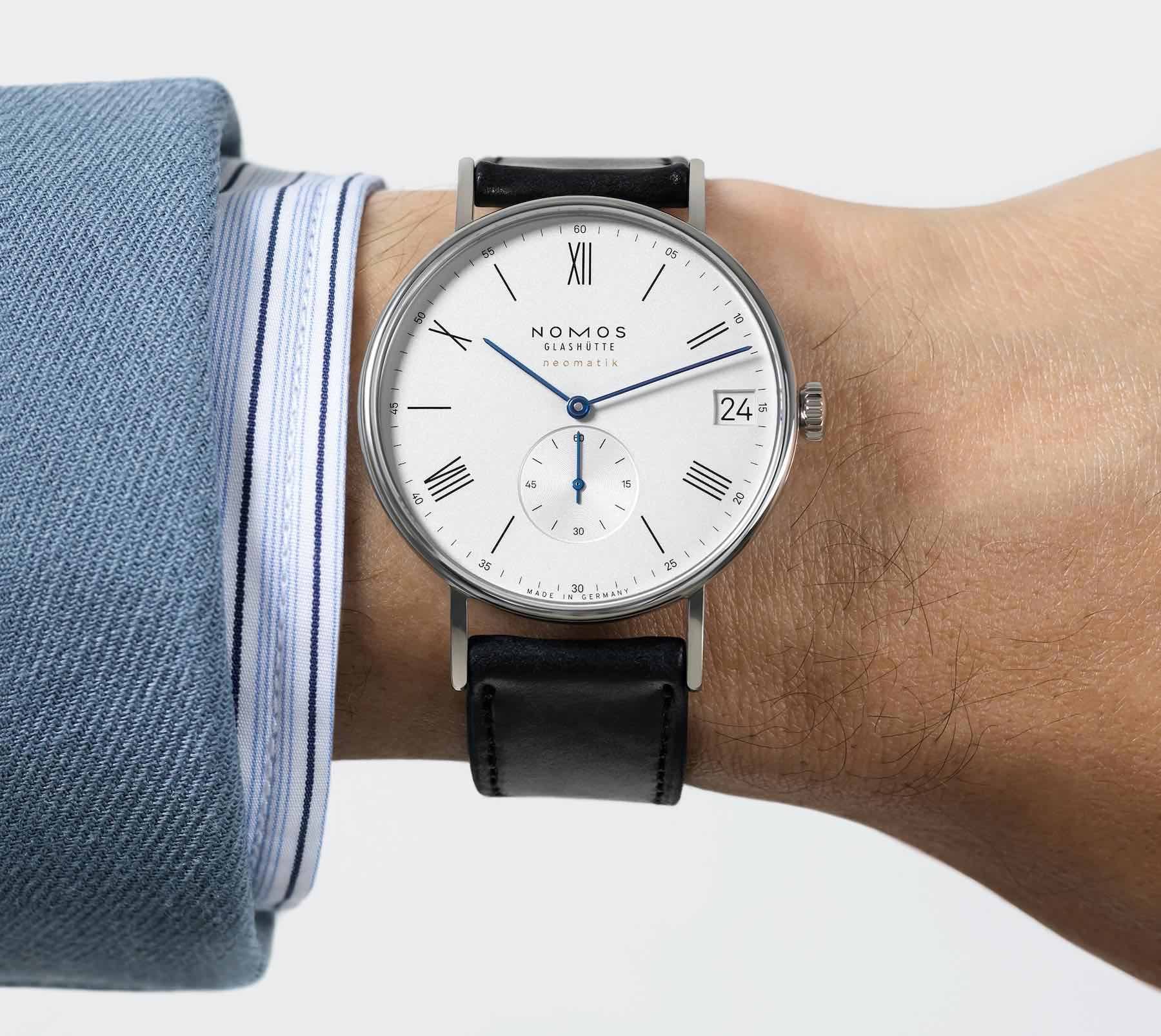 Both the DUW 3001 and the DUW 6101 represent a new technical benchmark for the brand. Designed with an eye on the future, updates are possible. It is possible to add new complications if necessary. Having that kind of control makes a big difference. The brand has gone as far as to develop its own escapement — the NOMOS Swing System. That alone is a testament to the brand’s vision.

…the motivation has been to increase quality. To build something sustainable. And to ensure that customers keep on coming back to the same sleepy Saxon town for more.

NOMOS Glashütte has these innovative in-house calibers locked and loaded for the future. For many brands, growth is the main driver. For NOMOS the motivation has been to increase quality. To build something sustainable. And to ensure that customers keep on coming back to the same sleepy Saxon town for more. Learn about NOMOS Glashütte here.