With the town still celebrating 175 years of watchmaking excellence, the Ludwig arrives at the right time
Rob Nudds
comments 15
Share

The 175th anniversary of watchmaking in the small Saxon town of Glashütte may have been two years ago in 2020. The celebrations, however, are still rolling, well into the 177th year of horological activity taking place in the Müglitz valley. With the release of the limited-edition Ludwig 33 in solid gold, NOMOS Glashütte looks to honor the history of the town it has called home since its foundation in 1990.

I was born in 1985. I have it in mind that I am very used to being told just how young I am by anyone even slightly older than me. However, it is only recently that I began to realize it happens rather infrequently these days. Throughout my twenties, I was uncommonly fresh-faced. Even in my early thirties, I still seemed to give off an air of someone younger than my years. Suddenly, somewhere around the age of 32 or 33, things changed, and I stopped being a “young” man and became just a man.

Now, that might not seem very shocking at all from the outside. That’s normal! That’s aging! It happens to us all! Of course, it does. But, crucially, it happens to us all only once. There comes a point in our lives — and it is a different point for everyone — that we go from being defined by our youth to being defined by our character. The frivolities of nonage evaporate almost instantly, and the cavalcade of misdemeanors a younger man, woman, or entity could shoulder with ease suddenly become burdensome. We lose the ability to “get away with it”. Suddenly, we are forced to grow up. It is at this point, that the content of our character can truly be judged. And this doesn’t just happen to people. It happens to companies too. 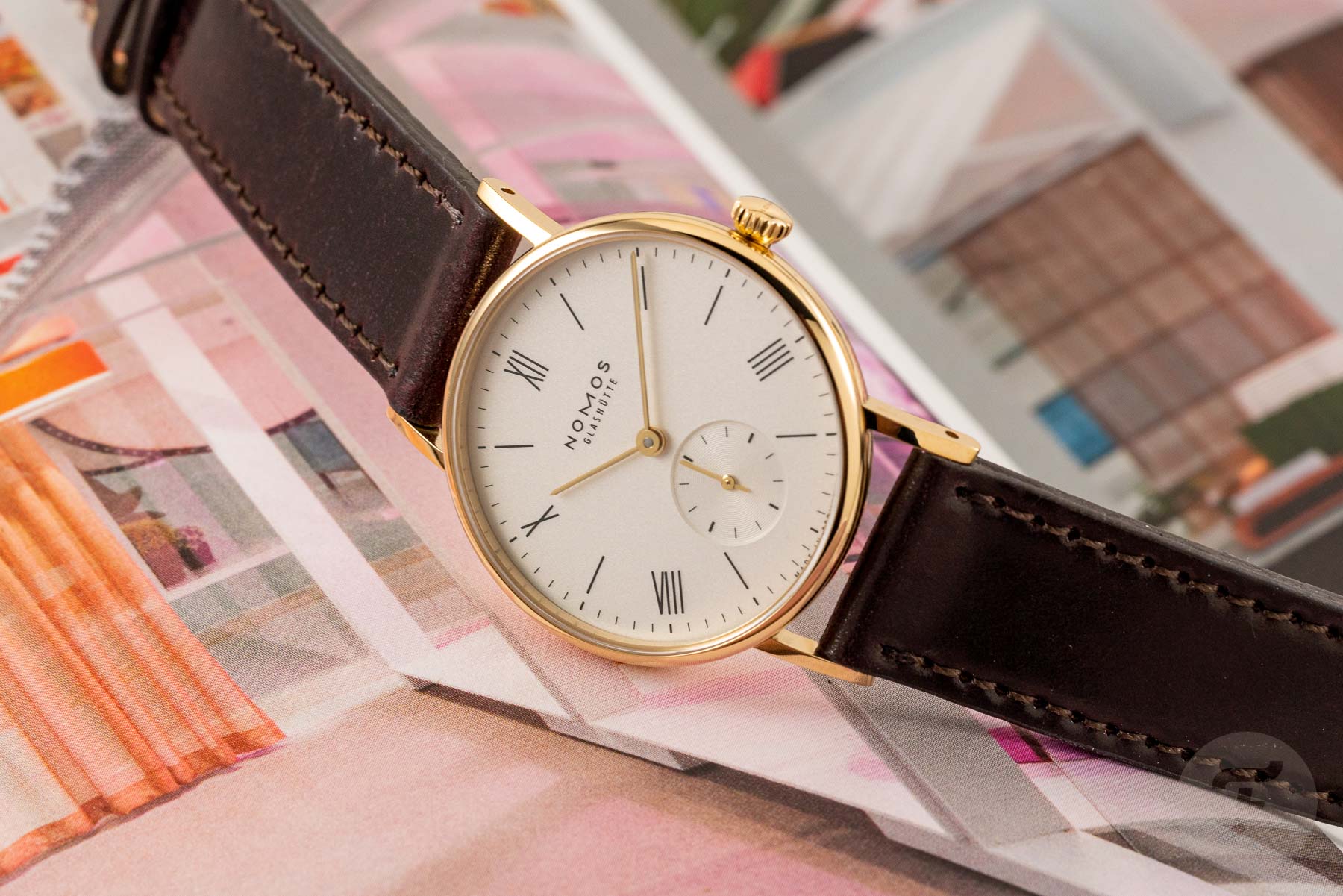 If you would be so kind as to read that heading aloud in the voice of Mufasa (the big daddy lion from The Lion King), I’d be much obliged.

NOMOS Glashütte is almost 32 years old. Ever since I’ve been aware of the brand’s existence, I’ve referred to it as “the young upstart”, the “youthful jester”, the “playful newcomer”, or something along those lines. Those monikers have seemed appropriate despite NOMOS having released some very serious watches and made some very impressive movements during its time. Perhaps those nicknames were born of the brand’s relative youth, surrounded by stony-faced legends of the game whose legacies tower above its own like the mountains that cocoon the town from the outside world.

Nomos uses both the “IIII”…

But as relatively accurate as those affectionate pet names may have been, they are starting to feel a little beneath the brand and all it has accomplished. Is NOMOS still an upstart? Yes, I imagine it always will be. Does NOMOS still have a sense of humor? Indeed, I’m sure hell would freeze over before that changed. Has NOMOS demonstrated an ability to be simultaneously silly and scholarly? Yes, it has, in ways few other brands could. However, as the brand continues to extol the history of its hometown as it canters toward two centuries of Saxon watchmaking, it’s starting to feel like it has ascended to full maturity. All I can say is that this is certainly a good thing for lovers of fine German watchmaking. 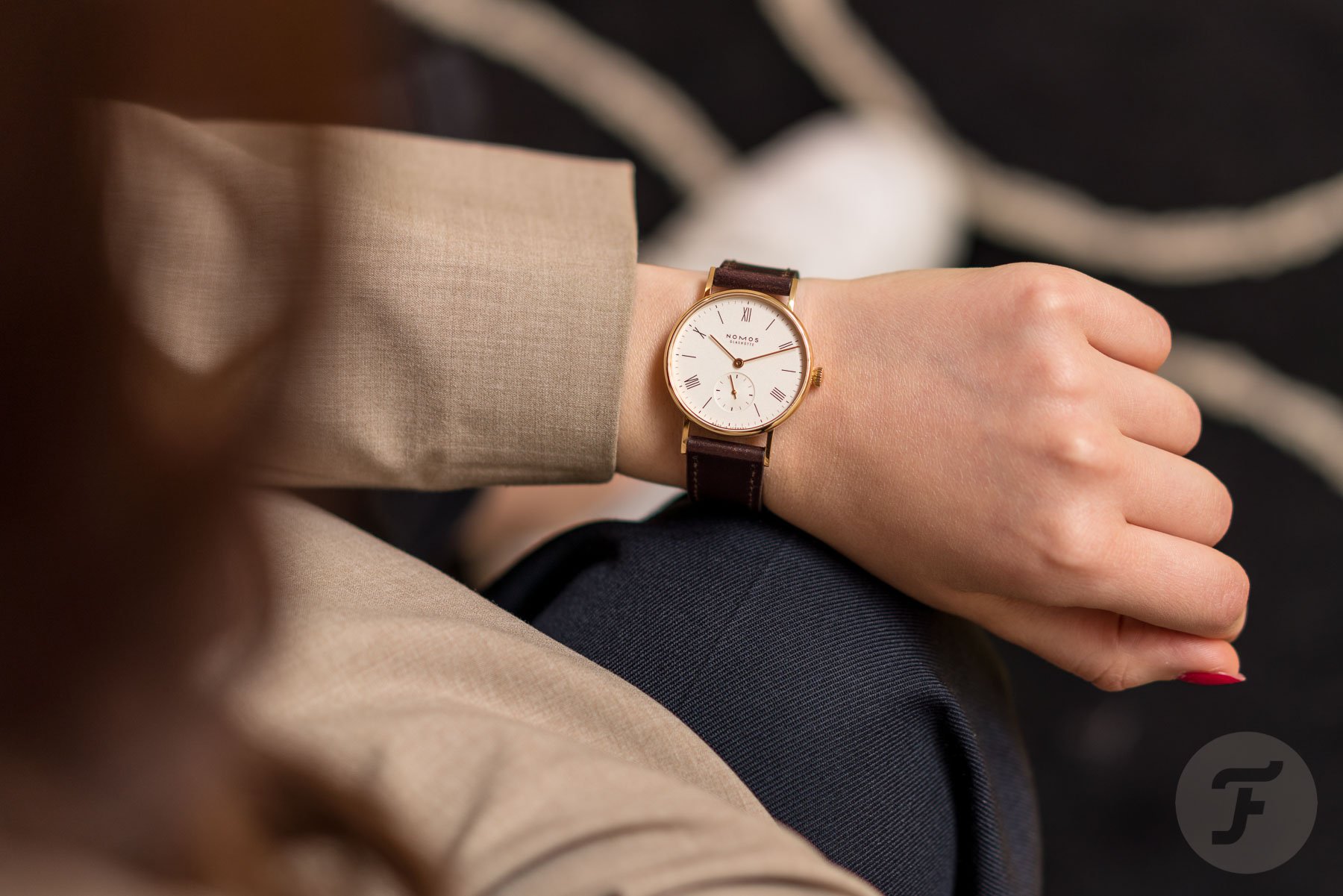 The gloves are off

This Ludwig 33 Gold, which is the watch that inspired my current shift in perception, is not the first gold watch the brand has ever produced. It isn’t even the first gold Ludwig. In many ways, this is a soft remake of a 35mm model that tested the waters 15 years ago (reference 211, for anyone who’s counting, available with either a white dial or a Mocca dial).

This smaller, arguably even more classical interpretation draws its design from the past, and the use of precious metal — yellow gold, no less — is a mark of reverence from a very German and generally quite utilitarian brand. Now, I know 33mm sounds small, but reserve your judgment until you’ve had a chance to try it on. The long, straight lugs of the Ludwig make it wear a lot bigger. Case in point: I wear a NOMOS Weltzeit, which is around 40mm in diameter, an Orion in 38mm, and, you guessed it, a Ludwig in 33 (I also wear a Tetra at 27.5mm, but the less said about that the better).

So why has it had such a profound effect on me? Truthfully, this watch is just the icing on a cake that NOMOS has been baking for six and half years since it first released the DUW 3001 caliber. That release was seminal. It marked a turning point in time for the brand. If NOMOS managed to pull off the shift to in-house manufacture, the brand would forever be free. It would have complete control over its direction. The visions of its leaders would be manifestable because of such autonomy. It wasn’t guaranteed, however. And the times immediately following the DUW 3001’s statement release were not always smooth. 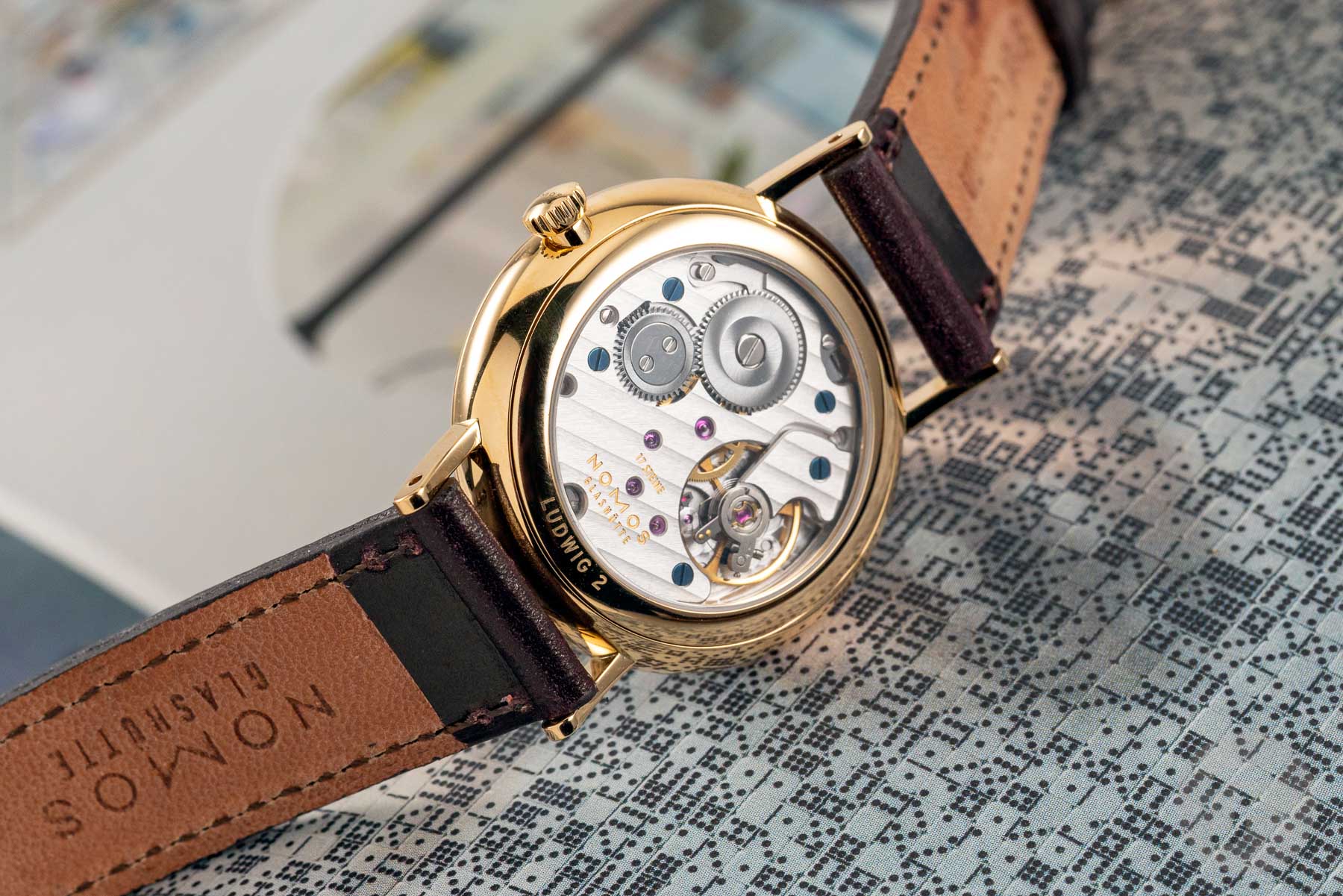 The road to maturity

A push for international expansion came on the 3001’s heels. The brand experimented with that strategy for about five years. Since then, just before and during the pandemic, NOMOS has chosen to focus on already-booming markets and refine its internal processes to become even more streamlined, agile, and dynamic. What that means in a theoretical sense is that models like this €7,800 33mm 18K gold Ludwig (water-resistant to 30 meters) and the bright pink- and purple-dialed Club Campuses (or should that be Campi?) can exist side-by-side and still make sense. Practically, it means NOMOS can do whatever it wants, and it will feel as if it’s always been doing the same thing because that’s what the brand is known for. It’s an exceptionally powerful situation for NOMOS to be in considering that it began its journey from a standing start just over three decades ago.

This release is a really nice way to mark the 175th anniversary of watchmaking in Glashütte (that already passed two years ago…). But it alone is not what gives me this sense of immense satisfaction when I look back upon the path NOMOS has traveled these past few years. This release smacks of a brand in the groove. NOMOS has figured out the lanes in which it can drive with its foot to the floor and is shifting between them with ease. Within every watchmaker’s catalog, there should exist invisible but tangible threads, knitting the collections together. These threads needn’t be explicit — perhaps the subtler the better — but they should be there, spinning a wordless narrative from one page to the next. 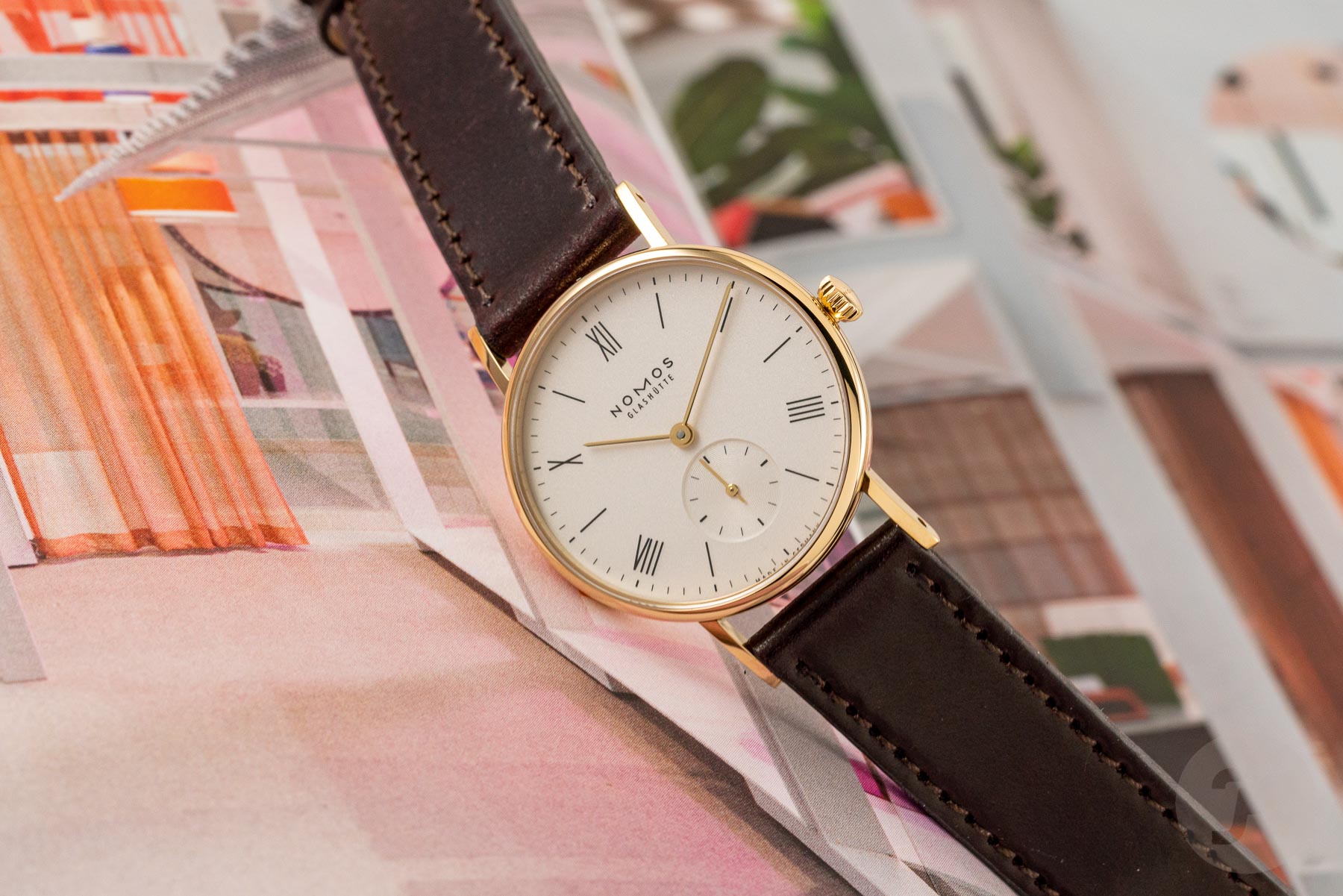 There have been outliers, missteps, and moments of downright madness along the way. The new NOMOS Glashütte Ludwig 33 Gold is not one of them. It is a watch built to the brand’s exacting modern standards with its heart in the past that laid the foundations for NOMOS’s creativity to truly flourish. Yes, this is one of the younger brands in Glashütte’s 175-year history, but it is also one of the oldest in its modern history, with operations commencing before the re-foundation of both Glashütte Original and A. Lange & Söhne became official.

In its emerging role as, if not an elder statesman, certainly a stately presence at the top table, NOMOS Glashütte could, after another 32 years of operations, find itself the best-known brand Germany has to offer if it continues to play its cards right. Right now, however, it seems likely the brand is content. Perhaps it is no longer the punk of the scene. Perhaps it has cut its mullet and removed its piercings. But when it comes to keeping an audience on its toes, few brands do it any better. Learn more about NOMOS Glashütte here.