Since we are in the middle of the Olympic Games 2016 I thought it would be nice to publish a Watches & Pencils special with a gold angle. We take a look at a few (historic) ‘Olympic watches’ and try to reveal their sportive ‘core’. Most of these watches are quite rare so I needed to look up for pictures on forums and shops. I would like to thank everyone who gave permission to use their pictures in this article. 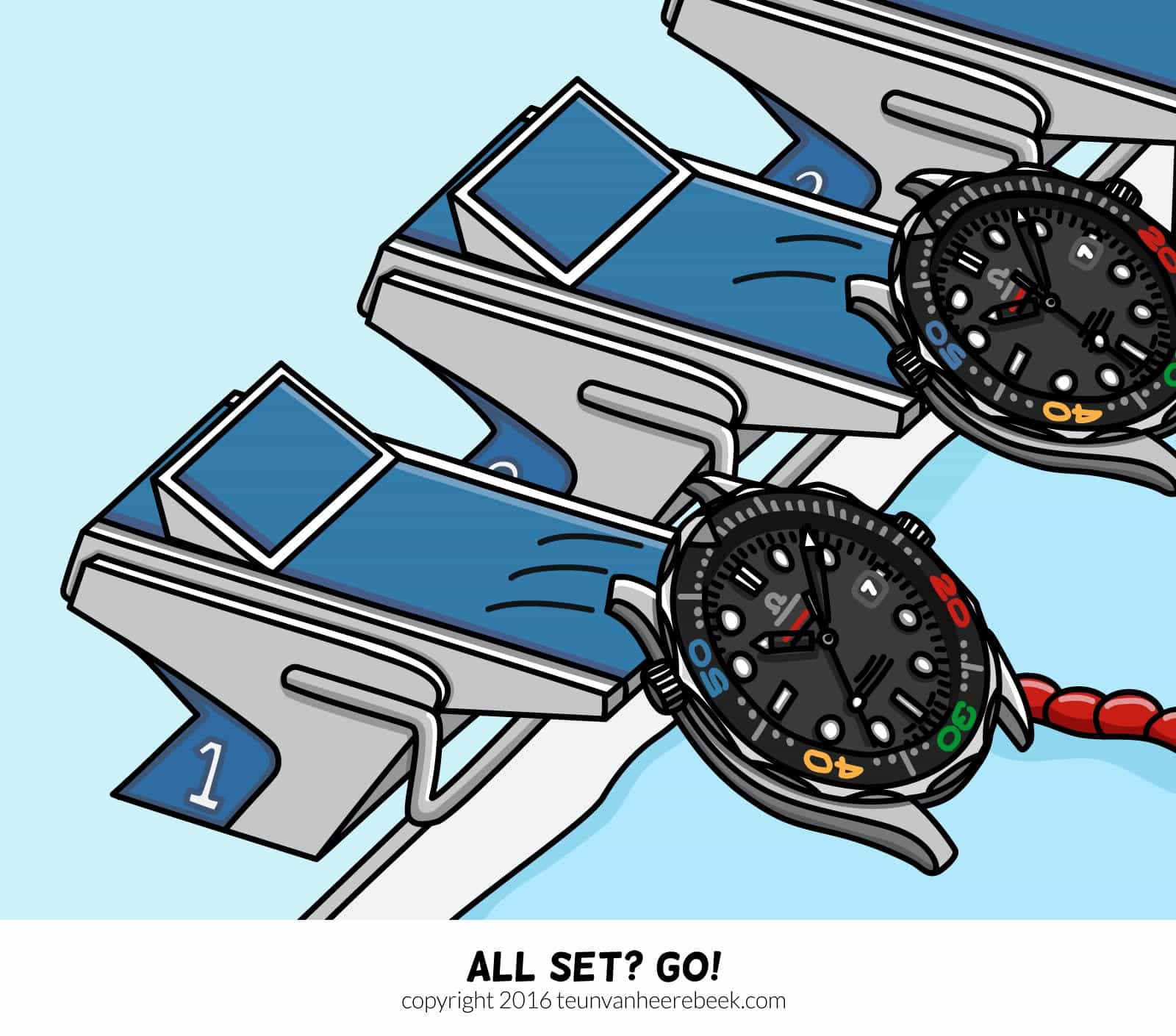 When you do a random search on the web for a sport related watch you will hit one which is related to the Olympic Games sooner or later. Most of the time the watch will be an Omega. If we take a closer look into the history of the Olympics it is actually quite logical. After all, Omega is official timekeeper since 1932. Although there are other brands who have been partner of the games, Omega is the overall ‘winner’. Let’s discuss Omega a bit later on and focus on some less obvious Olympic watches first. Some with photos, others not but I would not let you miss it.

The nice thing about the Olympics for watch aficionados is the fact that almost every timekeeping partner releases a limited edition with this big event. Sometimes the watch is a complete new model, but most of the time the brand releases an existing watch/series with adjusted color schemes. Some interesting years with Olympic watches are:

A very distinctive egg-shaped stainless steel chronograph with the famous ‘bullhead’. A design for comfortable and accessible time keeping and chronograph operations. With the typical vertical tapered case in terms of thickness. Like many other bullheads, this watch also has hidden lugs. Flavored with funky colors it commits to what was hot in the seventies.  Vibrant white / carrot accents together on a sunburst smoke-grey center. The orange faded to a more brownish color. Since the manual wound Valjoux 7734 movement (caliber Junghans 688.10) is rotated by 90 degrees we find the sub dials at 12 and 6 o’clock. Unlike many Olympic watches, this watch isn’t overexposing the fact that it is bound to the Olympics. The only subtle reference we find just below the logo on the dial: ‘olympic’. This probably isn’t the ultimate pick for everyone, but it is funky, sportive and distinctive.

Although there is often one primary official timekeeper in most Olympics nowadays, that was not always the case. In 1972 for example. Junghans was the official timekeeper together with Longines. But Certina also launched a few watches with an Olympic flavor. The Certina chrono DS2 “Chronolympic” to name one (ref. 8501800).

Longines released this 36mm mono-pusher especially for the games. Like the Junghans Bullhead this watch is also colorful with cobalt and pumpkin tones. It displays elapsed seconds with the contrasting needle shaped hand and minutes on the sub dial. Due the absence of an hour counter and the minute counter at 3 the lay-out becomes asymmetrical. Inside ticks the manual wound Longines caliber 334, based on the Valjoux 236 movement (column-wheel). I like to call the case a semi-tonneau. It isn’t a standard barrel shaped case, but the round head connects almost seamless into the (hidden) lugs-part on both sides. Also when viewed from the side, just like most of the barrels do. The only reference to the games can be found on the caseback. Not extravagant, but all the elements of 20th the Olympic Games are there.

Besides the Olympic games there are a few other big sport events with watches involved. The Asian Games and Winter games for example. While I was searching for pictures, Ken of Wannabuyawatch.com did speak about a Longines for the Winter Games of 1960.

It is a special model from the Conquest series with a unique case back. A true rare piece which I couldn’t find on the web until this day. It’s definitely dressier than most of the Olympic watches we’ve seen this far. With 35mm it is moderately sized for the 1960’s. The crown is signed with the brand name on a circular text-path. It is modest and in proportion with the case. The dial has a classic lay-out which falls in the same category as other dress watches from that period (e.g. Omega Constellation (ref. 14381) and IWC Ingenieur (ref. 56662).

A quick breakdown: mirror polished dauphine hands on a white spatial dial with very decorative and three dimensional raised hour markers. The markers create a nice depth to the dial and add a bit of excitement in terms of light and shadow. Though, it still is a bit of a sports watch. Hence, the applied luminova at the hour markers and on the hands. As indicated on the dial, it is driven by an automatic movement (probably caliber 290).

The front is balanced, clear and dressy but the main uniqueness is located on the back of this watch. In the center Longines placed a gold medal with enamel colored parts for the 1960 Squaw Valley Winter Olympics. We immediately recognize the Olympic rings into the logo for the games of the 1960 Winter Games. Unfortunately, the rest of the history of this watch is unknown to me. Was it for sportsman or coaches? Did everyone get a watch or just the winners with a gold medal? If you have more information we would love to hear from you!

Present and Past of Omega and the Olympic Games

This year Omega is the official timekeeper again. For the 27th time to be exact. With it’s 450 tons of equipment they are definitely one of the vital parts of the Olympics. To compare it with the first time: in 1932 Omega did send just one technician with 30 chronographs (Olympic Games in Los Angeles). What a difference!

Omega released lots of limited editions through the years of partnership. This year isn’t an exception. They released a handful limited ‘Rio’ editions based on existing cornerstone models. Often with color alterations or gold accents to make a connection with the Olympic symbol/colors or the true winning color: gold. They like to call it the ‘Olympic collection’. View the “2016 Rio” collection as well as past/future games collections.

To conclude I want to leave the stage with a special Omega which was introduced to me by Jacco of Amsterdam Watch Company. A small (33mm) gold Seamaster to celebrate the Olympic games from 1956 (XVI or 16th edition). With a production of only 100 Olympic watches this piece is a rare watch. In the middle of the dial we find the ‘Olympic Cross of Merrit’ which is applied with Chinese lacquer. There are two variations made: one with multi-color rings and one with only red ‘Olympic’ rings. The illustration is a reference to the medal which was given to Omega during the previous 15th Olympic Games in Helsinki as a reward for outstanding service to the world of sports. On the snapped case back we find a simplified version of the Olympic Cross.

I hope you’ve enjoyed this episode and have a great Olympic Games!

Questions, comments or nice anecdotes? Please leave your comments below.