Starting today, July 23rd, 339 events in 33 sports will take place in the host country of Japan. Including some new additions to the usual list, like karate, sport climbing, baseball, softball, and skateboarding. All of which, will also be timed by Omega. The Swiss manufacturer will provide 400 tons of equipment. Below you will find a little infographic on the numbers. 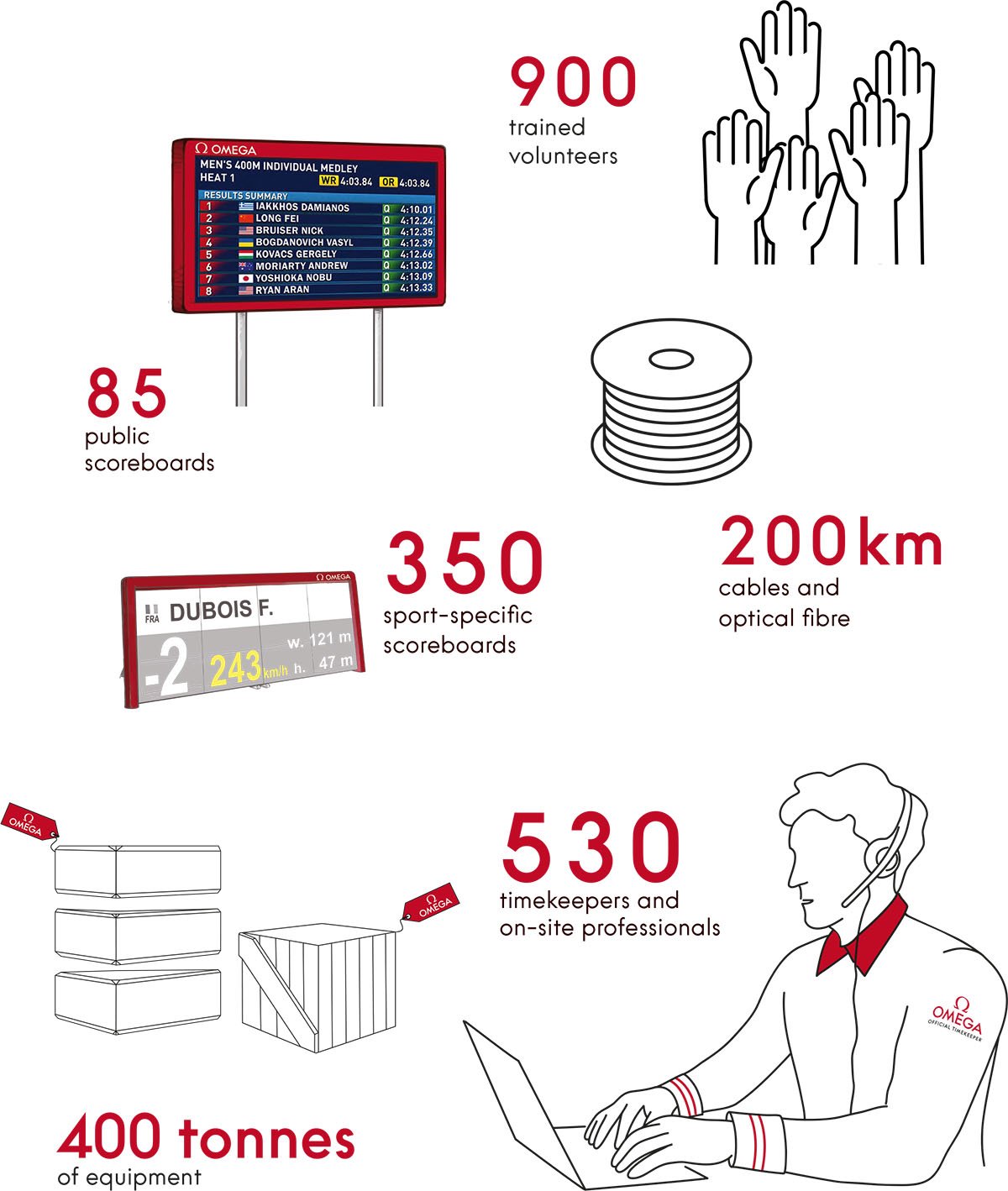 In total, Omega has now taken charge of the timing for 29 Olympic Games. As I mentioned in the introduction, it all started at the Games in 1932, in Los Angeles. No computers or other digital equipment was available back then, so Omega traveled to the USA with 30 high-precision stopwatches able to measure with an accuracy of up to 1/10th of a second. These stopwatches were used to time the 14 sports which made up the event back then. Olympic records were set in all of the athletics and in 10 of the 11 swimming events. It is interesting to know that Omega used its caliber 1130 stopwatches, which also feature a split-second complication. 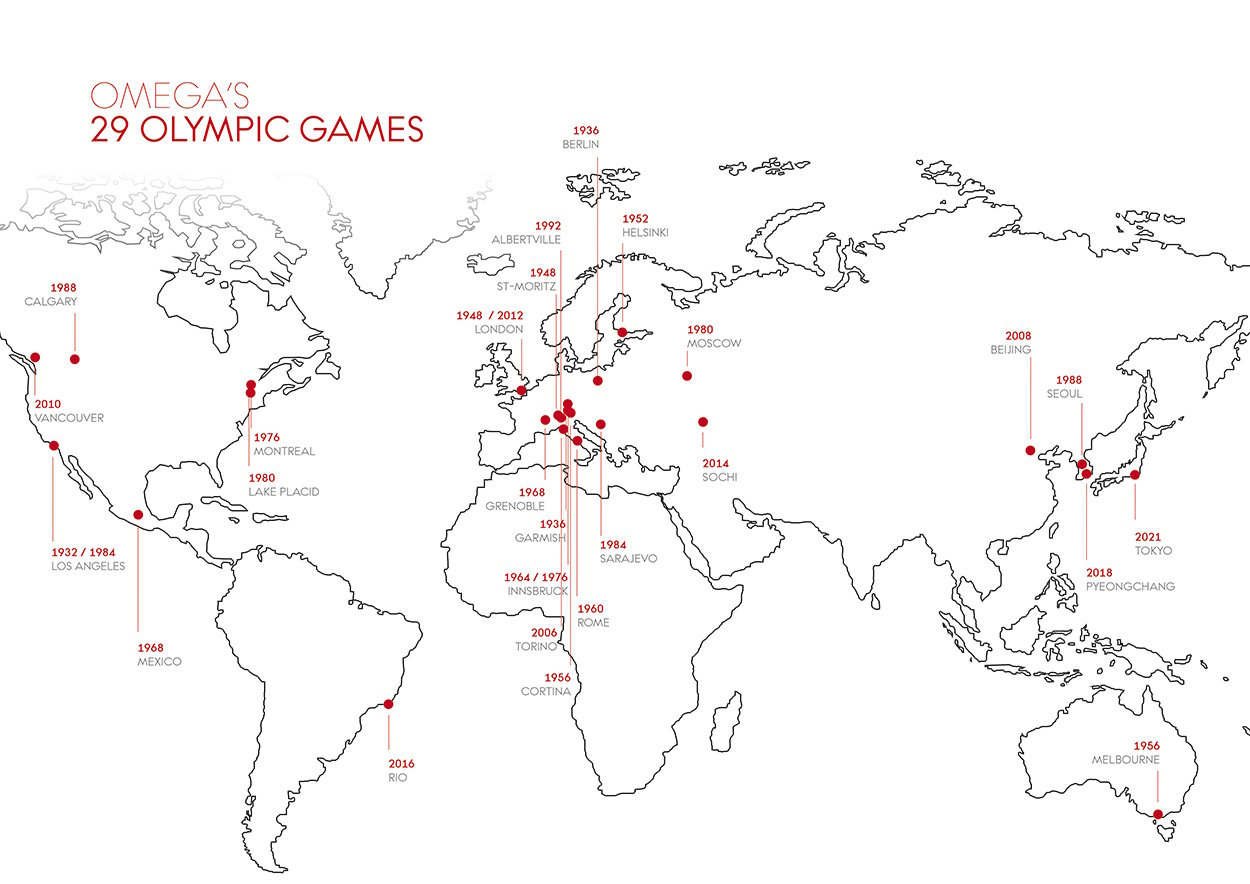 Omega has come a long way since 1932, and as you might imagine, a lot of things have changed over the years when it comes to timekeeping. From hand-wound stopwatches to measuring time with real-time data measurements using photocell technology, touchpads, and quantum timers that time to one-millionth of a second.

Let’s take a closer look at the modern technology that Omega will be using during the Tokyo 2020 Olympic Games. Perhaps you will even be able to spot these when you are following the Games on television. 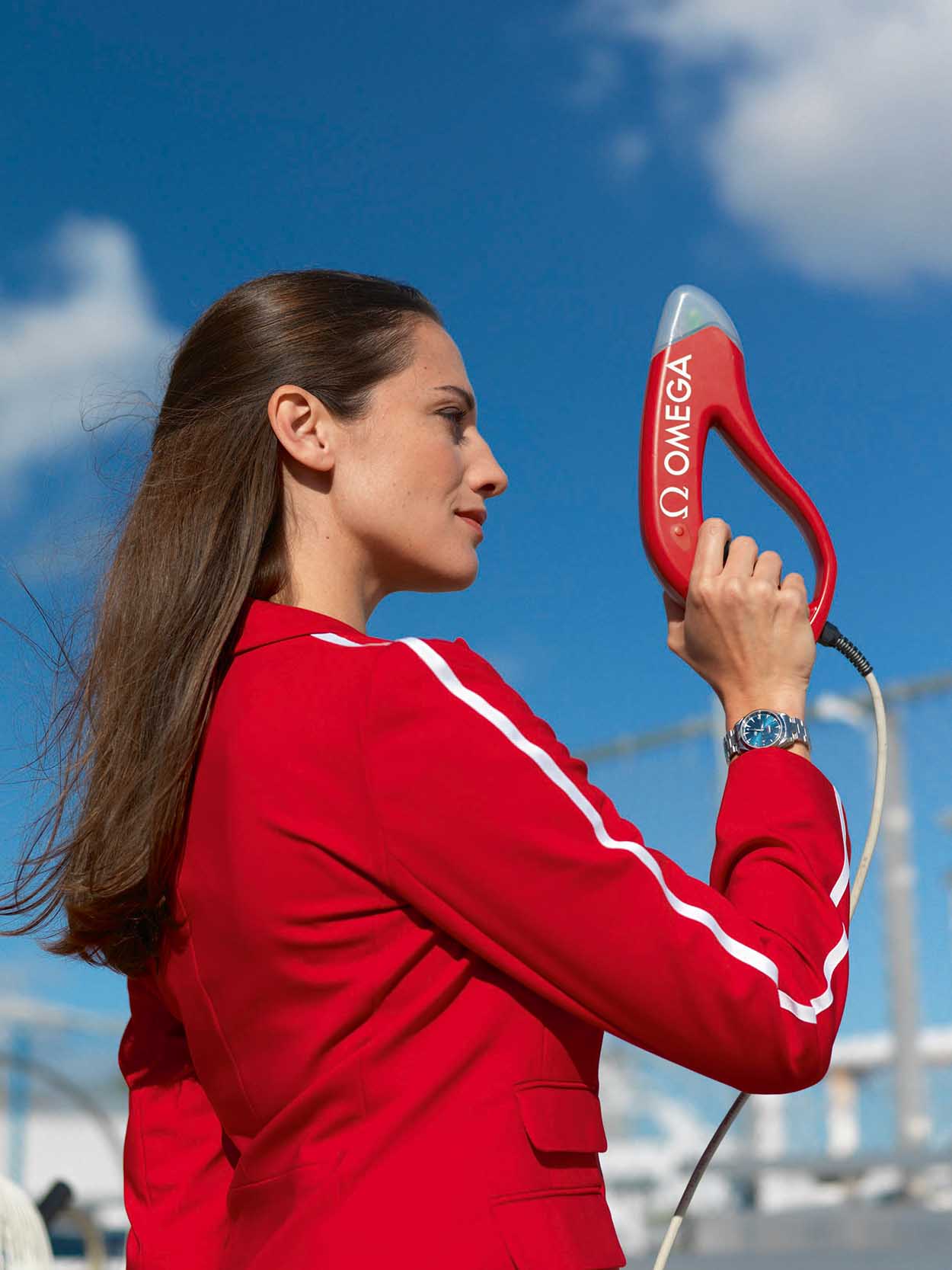 The issue with starting pistols in the past was that those who were furthest away from it were the last to heard the sound. You probably also know that light travels faster than sound. So, what Omega did, was to develop an electronic starting pistol that transmits a signal through a flash of light, which triggers the speakers located behind each participant. Ensuring that all of them will hear the starting sound at exactly the same time. 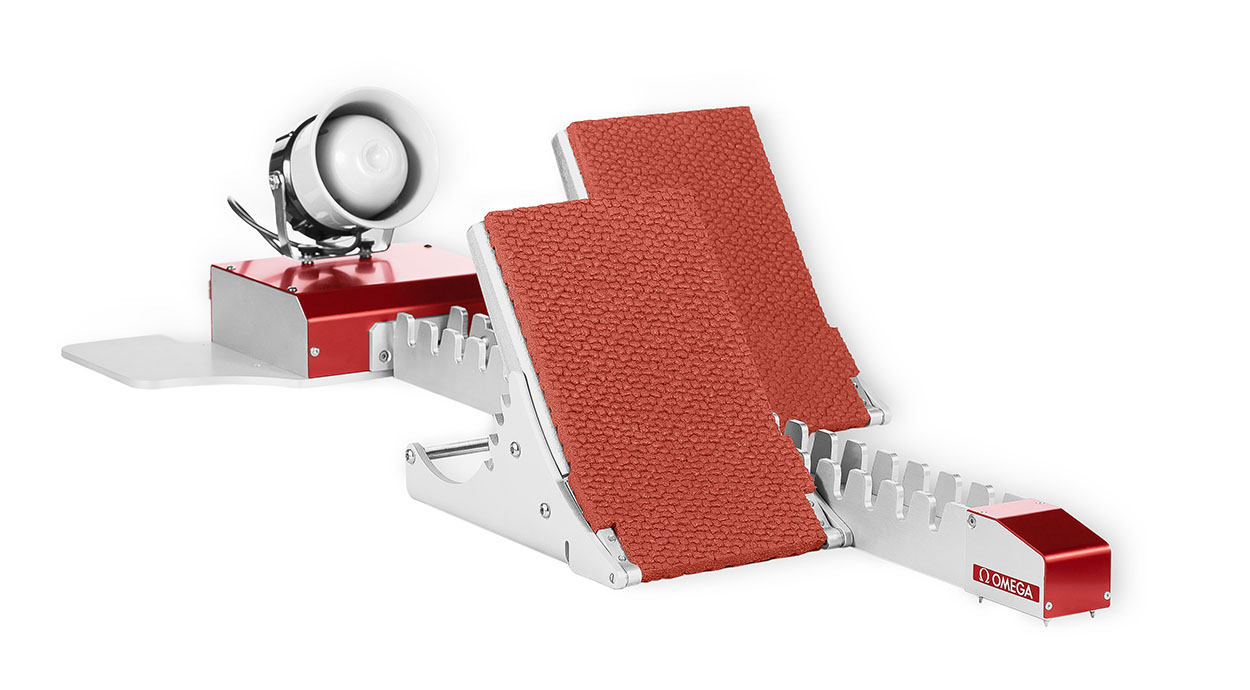 Besides the starting signal via each individual participant’s speaker (shown in the image above), there’s also an “intelligent” starting block. These are equipped with sensors, which measure the athlete’s force on takeoff against the pad no less than 4,000 times per second. This system helps to detect a potential false start, as the force measurement data is instantly sent to one of the on-site computers. To put it into numbers, any reaction from an athlete under 100 milliseconds to the starting signal is considered to be a false start. 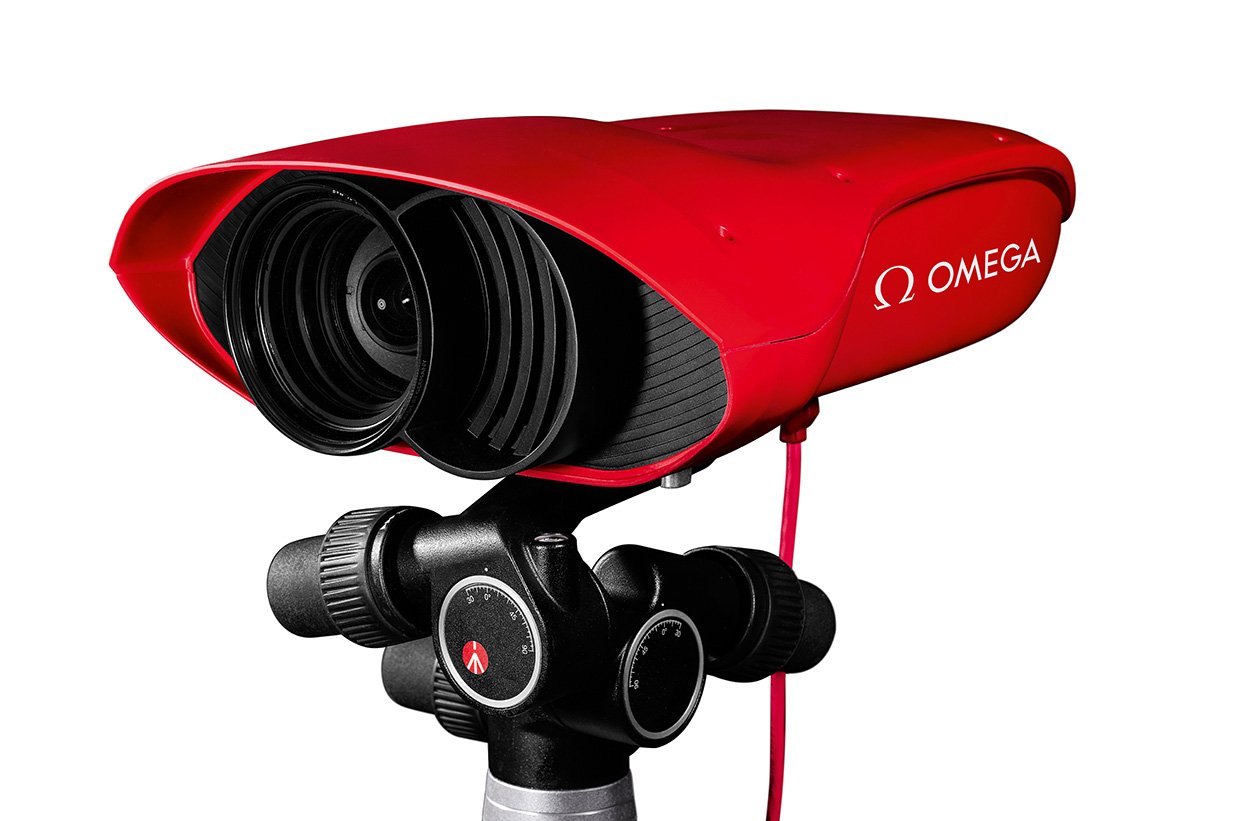 If you pay close attention to the screen when you’re watching sprints, hurdles, or other races, you will probably see a number of these futuristic-looking red cameras. These are the Scan’O’Vision MYRIA photo-finish cameras. They are able to record up to 10,000 images per second, producing a composite photo that enables the judges to analyze the rankings and times of each event. They provide the incredibly accurate data necessary for a clear decision in the event of a close call. 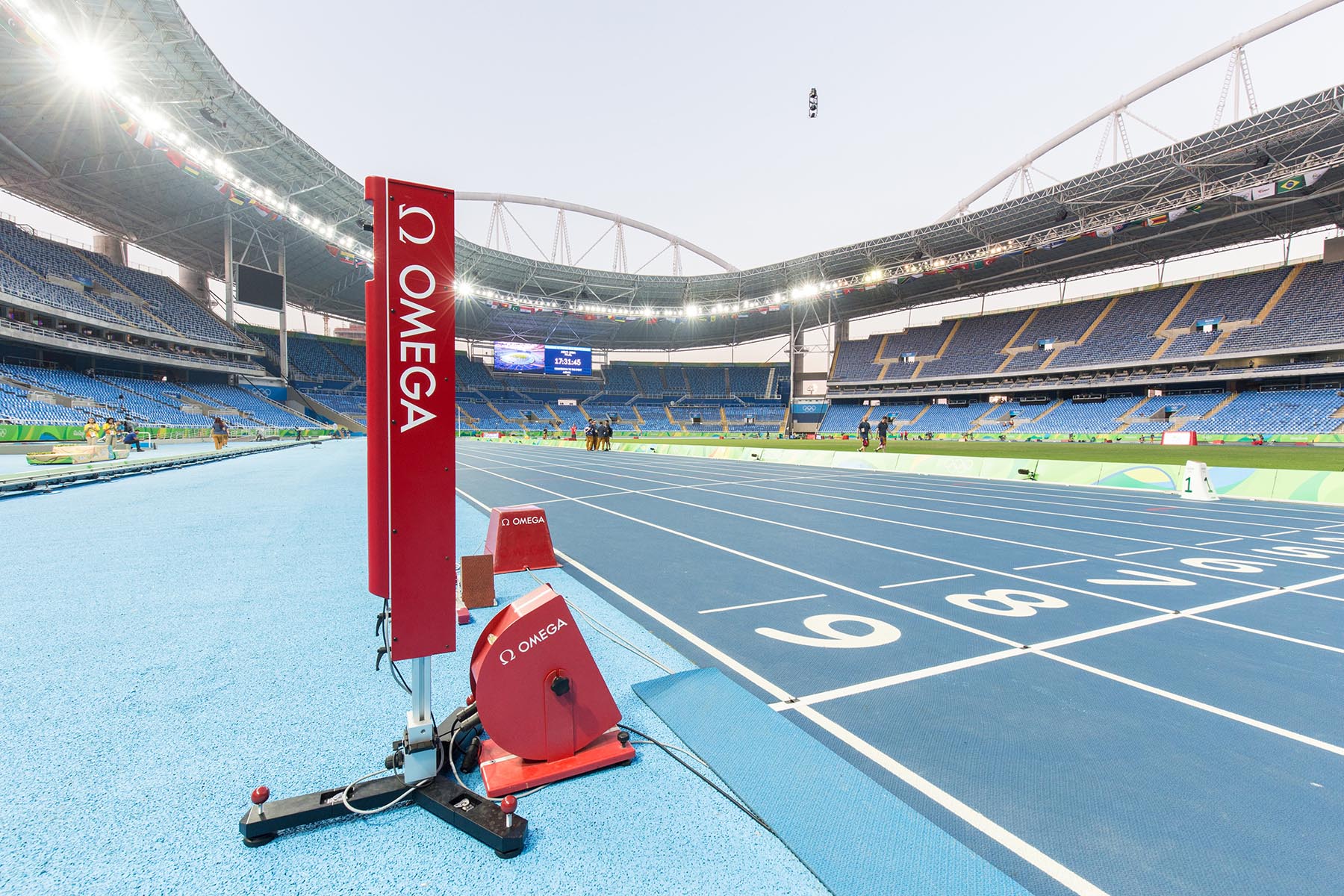 A photocell camera located on the finish line uses four beams of light to detect an athlete’s body. It then immediately stops the clock and presents the official time. 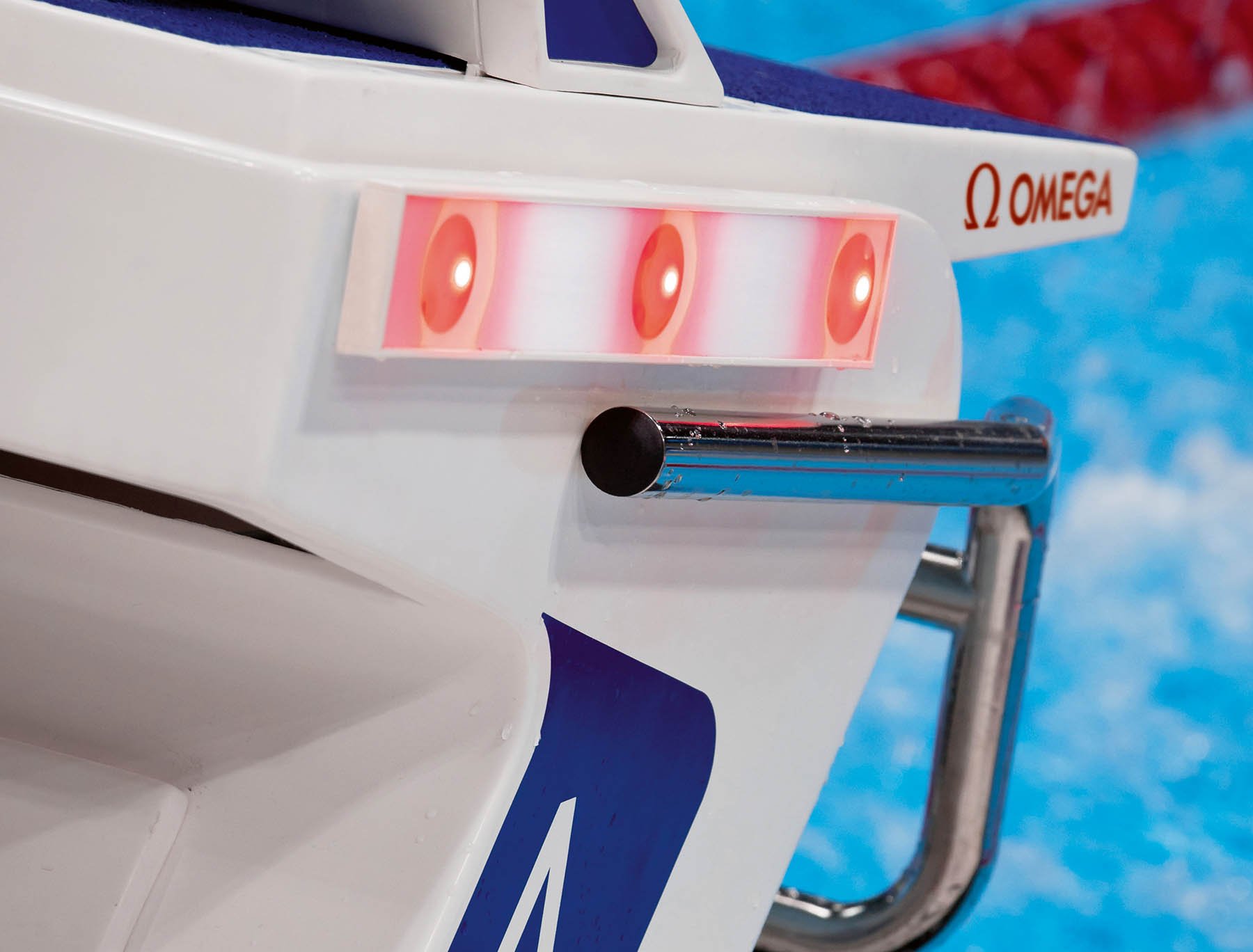 This system has been put to use to clearly present the outcome of the swimming races. It is an innovative piece of equipment mounted on the starting blocks and given the name “Swimming Light Show”. When a race is over, the winner is indicated by a single large dot on the starting block. Two medium-sized dots show who came in second, and three smaller dots show who came in third (still no small feat). This way, both the athletes and the spectators of the race can immediately see the rankings. 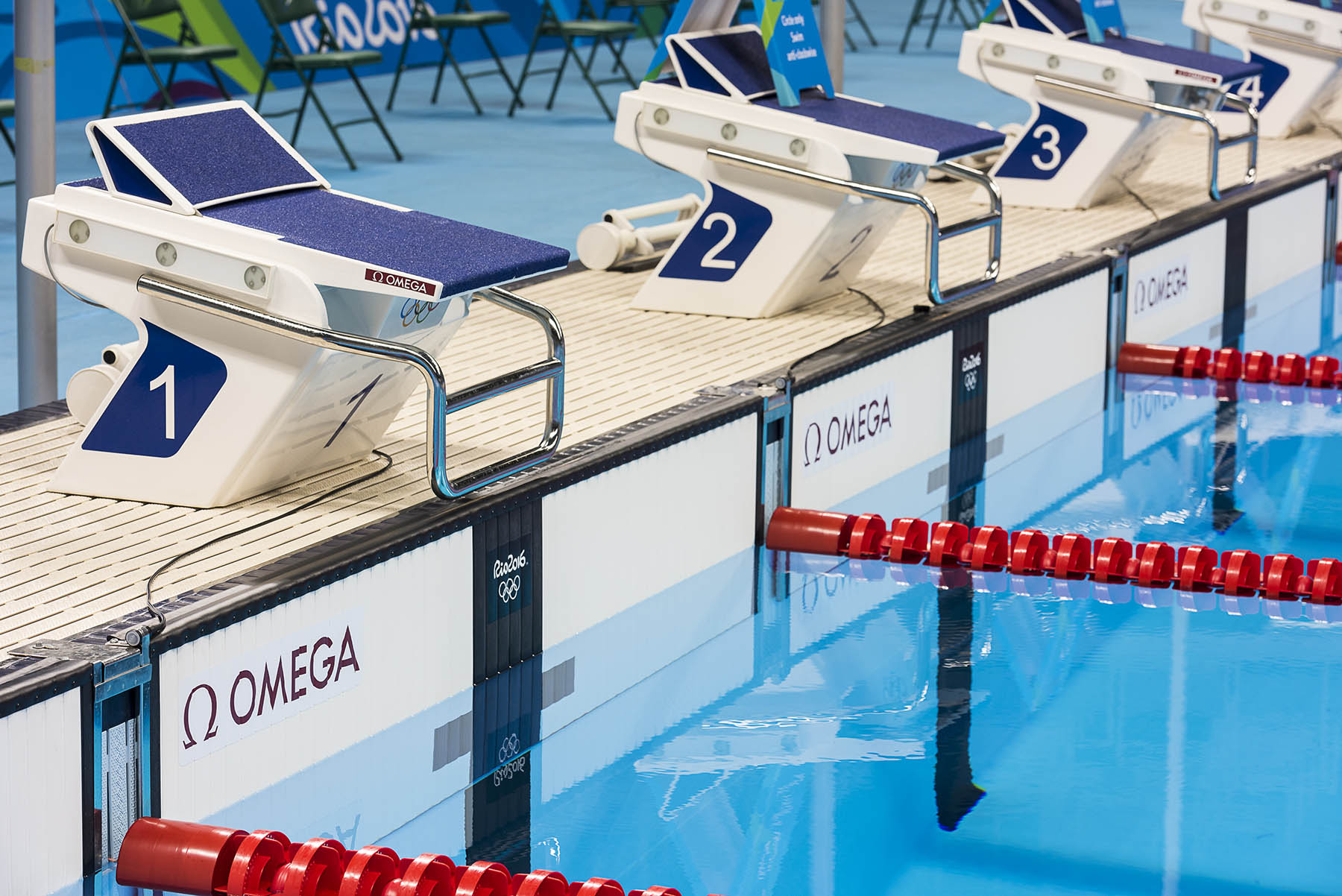 That’s all well and good, but how exactly does the “Swimming Light Show” know who won? Well, if you look in the image above, you will see that in each lane there is a large black & white touchpad in the water. These swimming touchpads are located at both ends of the pool and each time they’re touched by the swimmer, it records the time. At the end of the race, the time is stopped by the final touch of the swimmers’ fingertips. The pressure required to activate the pad is between 1.5kg/3.3 pounds and 2.5kg/5.5 pounds) It might all sound rather high-tech to you, but Omega had aready introduced this technology back in 1968 during the Olympic Games in Mexico City. 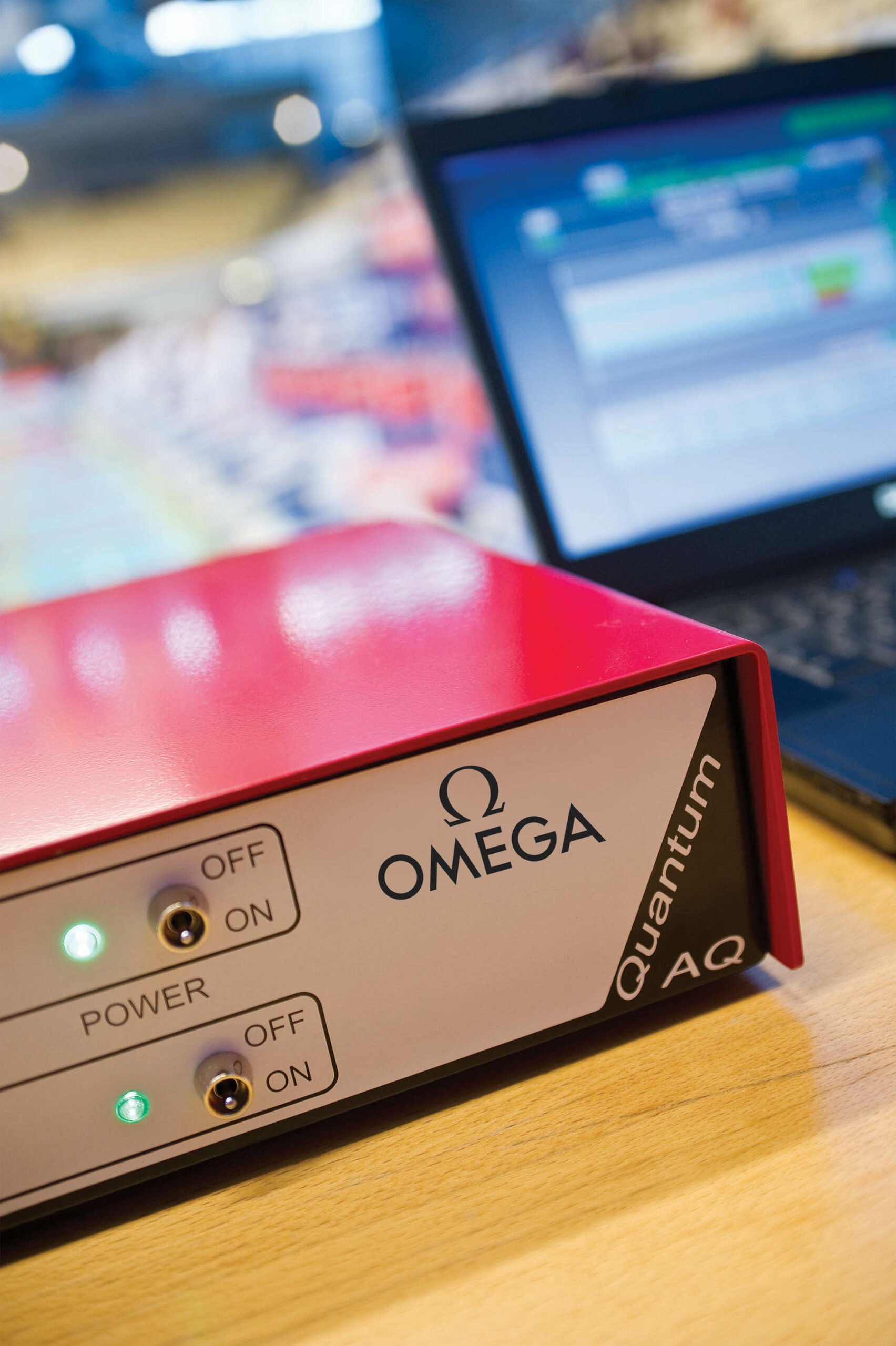 This may just be my favorite timing solution, mainly because it is the modern version of the mechanical stopwatch that was used in those early 1930s Olympic Games. With Omega’s Quantum Timer, it is possible to measure one-millionth of a second. Using a microcrystal component in the timer, the resolution (1/1,000,000 of a second) is 100 times greater than previously available measuring devices. Sure, it has nothing to do with anything mechanical, but the precision of this equipment is just mind-boggling.

But that’s not all. For the Tokyo 2020 Olympic Games, Omega has some new timekeeping tricks up its sleeve. In Japan, Omega will introduce motion sensing and positioning technologies.

Thanks to the wide range of data collected in real-time, each race can be precisely followed from start to finish. Using this data, athletes and coaches can analyze exactly why they won (or lost) time in the event. Additionally, all this information gives commentators and analysts more details to use for their articles, presentations, and stories. Let’s have a look at some of the sports and what these new motion sensing and positioning technologies add to the table. 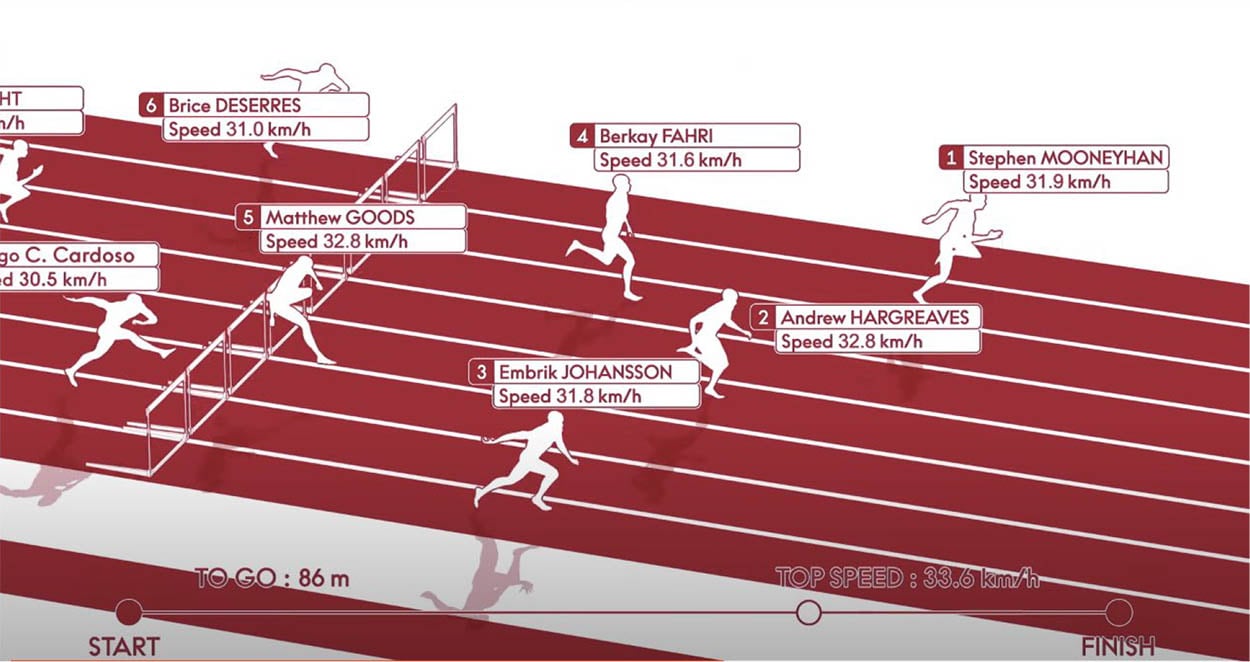 No intermediate times anymore, but live positions! That’s what Omega is able to measure using the sensor tags affixed to the start numbers on the athletes. This is called the RTTS, Real-Time Tracking System. The sensor tags communicate with a number of receivers on the track and send all necessary information to Omega’s on-site computers. Besides the usual live positions — live speed, acceleration, deceleration, and distance information will also be available. 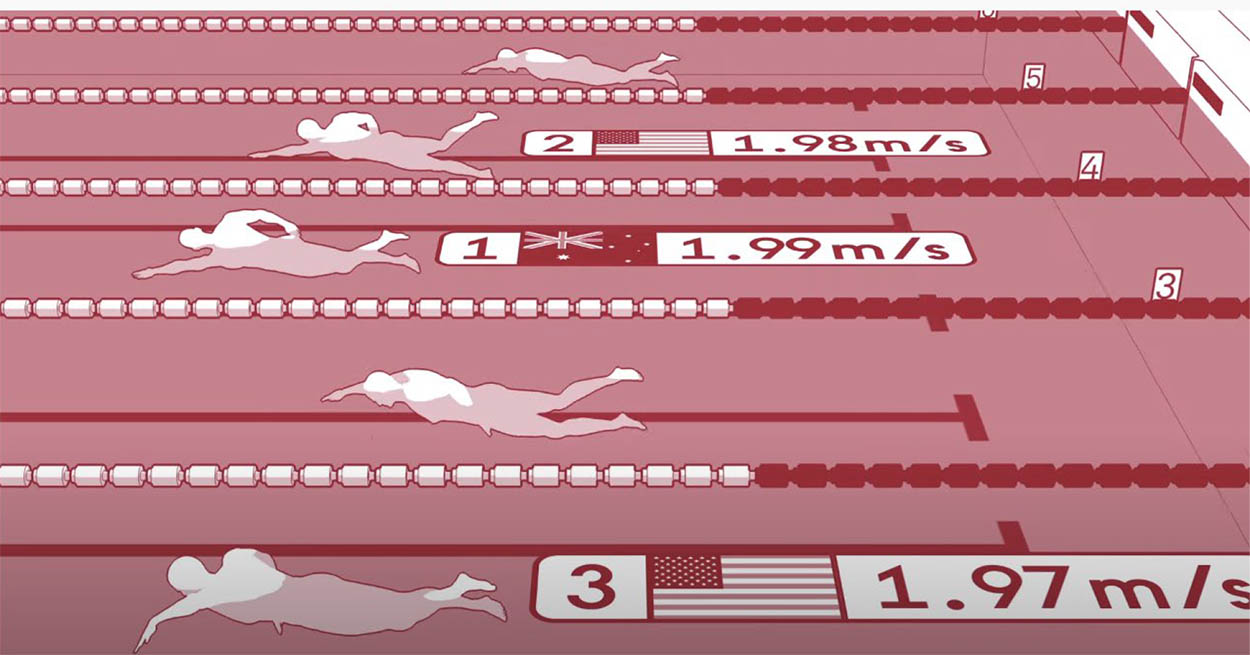 As the swimsuits leave little space for sensor tags, the swimmers are tracked using cameras located around the pool. These will track the movements of each swimmer. Again, live positions, live speed, acceleration, deceleration, the distance between swimmers, and even the number of strokes will be measured.

Something completely different from sprints, hurdles, or swimming. Beach volleyball is a team sport, and besides playing time, there’s a lot more to keep track of. Using image-tracking cameras around the playing field, Omega is able to capture every single moment of action. All players, and of course the ball itself, can be tracked individually during the game. So what does that mean for us? Well, with the gathered data, the distance that each player covers throughout the game can be shown, also the movement speed of the players and the ball, for example. But even more amazing is the tracking of unique player’s techniques, including the number and height of their jumps. Last but not least, Omega gets all insights on the type of shots, from smashes and blocks to spikes. This new system provides the commentators a lot of key data which they can use while reporting live on the game.

For this sport, Omega uses the Pose Detection system. This highly advanced system is made available to the judges, to review an athlete’s technique, for example. E.g., reviewing the synchronicity of performers, and even the horizontal displacement in the trampoline events. It is all made possible using the Pose Detection system’s ability to track the complete movements of the athletes. 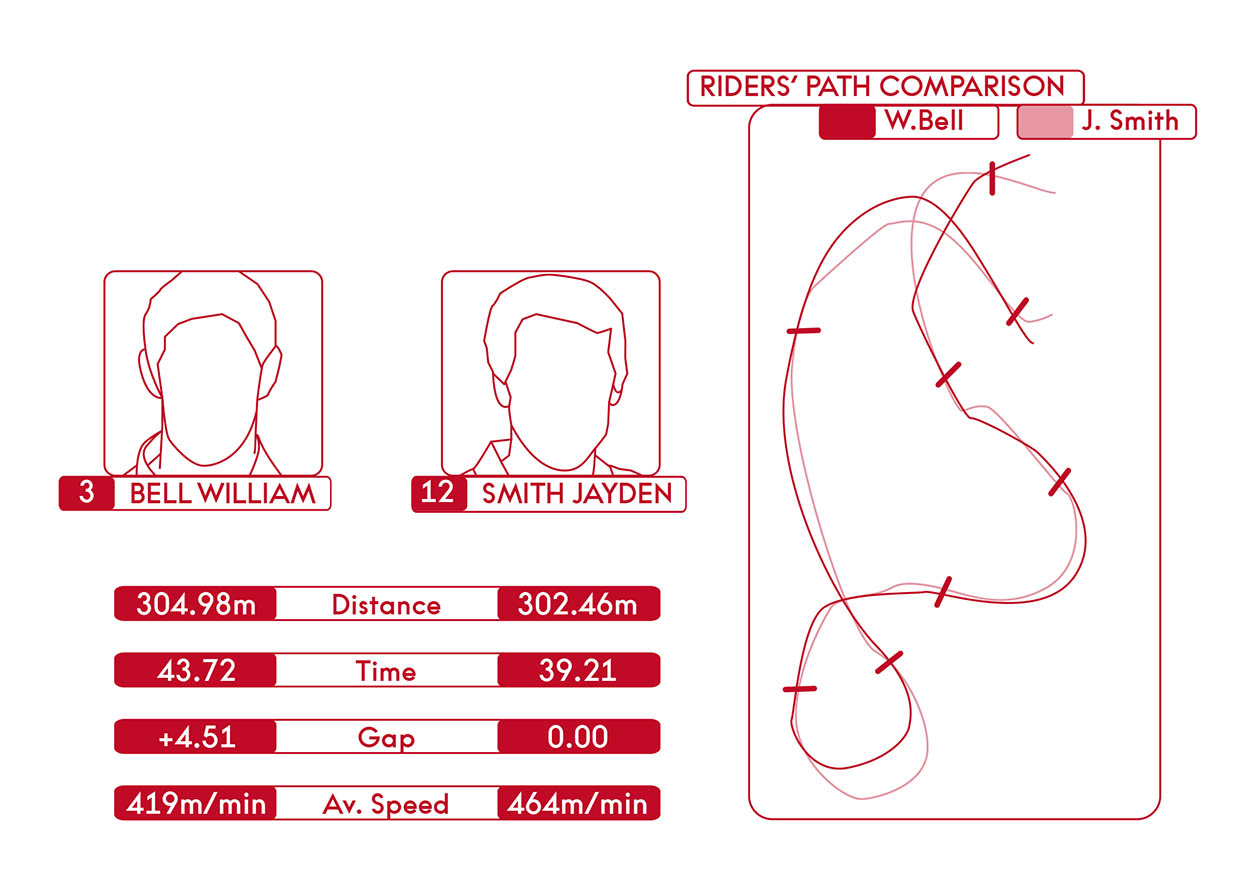 I recently witnessed some jumping action at the CHIO in Rotterdam (timekeeping there is in hands of another Swatch Group brand: Longines). Timekeeping itself is one thing, but with Omega’s latest technology, they’re capable of tracking the distances, live and average speeds, time of the flight over a jump, the exact path on the course, and the trajectory over a jump. By using this image-tracking technology, Omega will be able to follow all the action in the equestrian events. To top it all off, laser detection is also used to follow the horse’s movement.

An exciting new addition to the Tokyo 2020 Olympic Games is sport climbing. It will come in three different disciplines. The first one is Speed, where the athletes have to reach the top of the 15-meter climb as fast as possible. It will be a competition where two athletes go head-to-head in a race to the top, where a set of touchpads that stop the timing await activation. This method of stopping the time means that other than in the swimming events, climbing is now the second sport where athletes are responsible for stopping their own time. The second discipline will be Lead, where the athlete gets just 6 minutes and one attempt to climb a 15 meters wall. The ranking will be based on the height they are able to reach on the wall. Last but not least, there’s Bouldering. Athletes will compete with each other on 4.5m high structures, known as boulders. Each boulder has its own challenges for the athlete, who will need to solve them within a set amount of time.

Want to know more about Omega and the Olympic Games? Click here.