Having initially been postponed due to the coronavirus crisis, the Tokyo 2020 Olympic Games have been announced for 2021. Following last year’s limited edition Olympic Games releases, Omega just has announced the Seamaster Diver 300M Tokyo 2020.

Exactly one year ago Omega introduced two modern sports watches — the ichimatsu-moyo-inspired Aqua Terra and the Planet Ocean with the red lollipop central seconds hand. Both models turned out to be a remarkable success even though Tokyo 2020 has been carried over to this year. Will this Seamaster be as successful as its predecessors? Let’s see what it’s got going for it… 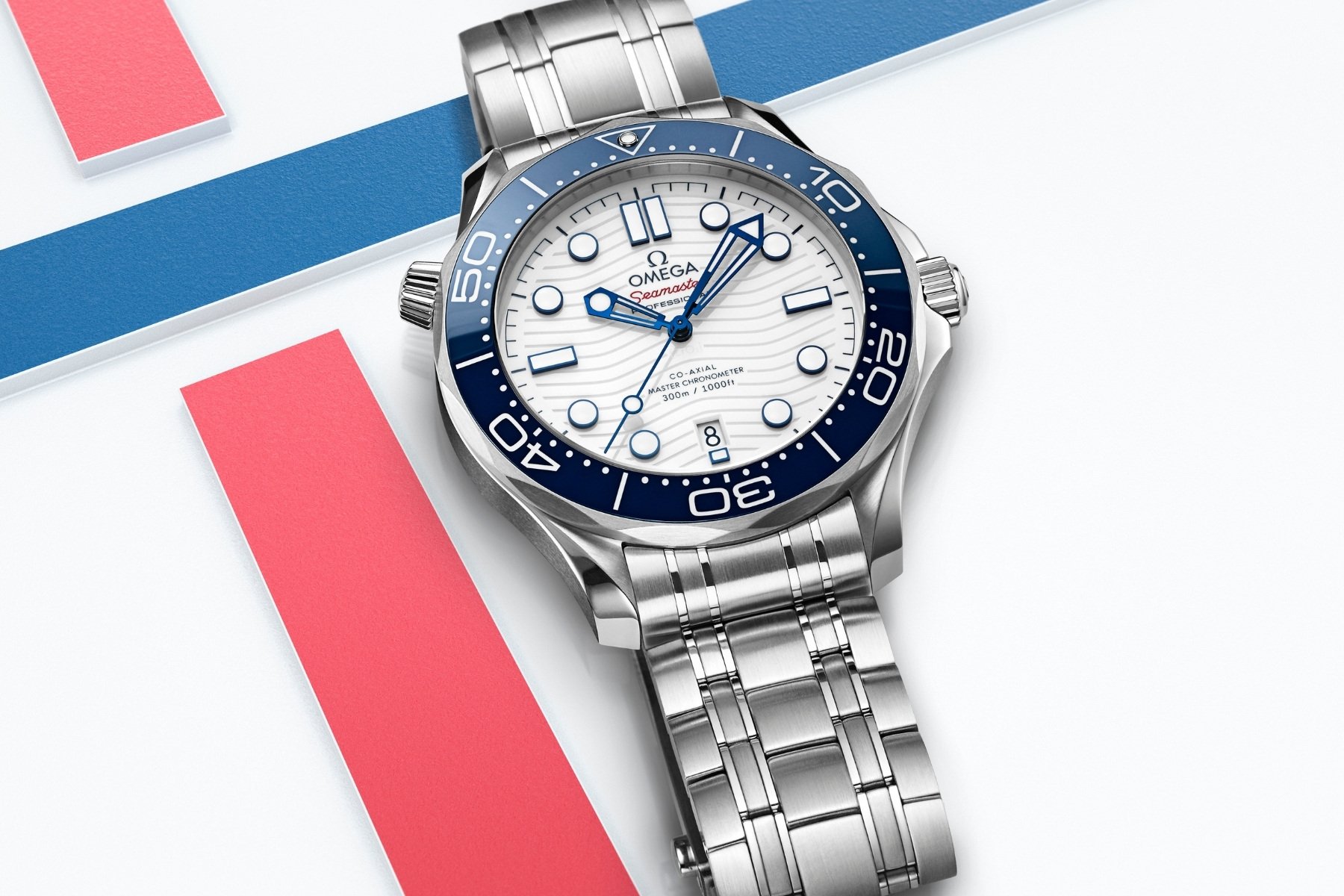 The inspiration behind the design

Just like the Aqua Terra, the design of Seamaster Diver 300M Tokyo 2020 is inspired by the Tokyo 2020 Olympic Games emblem. However, instead of creating a chequered emblem design with the Olympic Games logo, this time Omega opted for the colors. One thing’s for sure — this was the right decision to make. Firstly, you can never go wrong with blue and white. Secondly, this concept feels a lot more timeless. That’s often a concern for would-be buyers of event-themed limited editions: beyond the significance of the moment, how will the piece age? Surely a watch needs to be attractive in its own right to be desirable. Sometimes these partnerships fail to appreciate that. Omega, however, is becoming the master of striking the right balance. 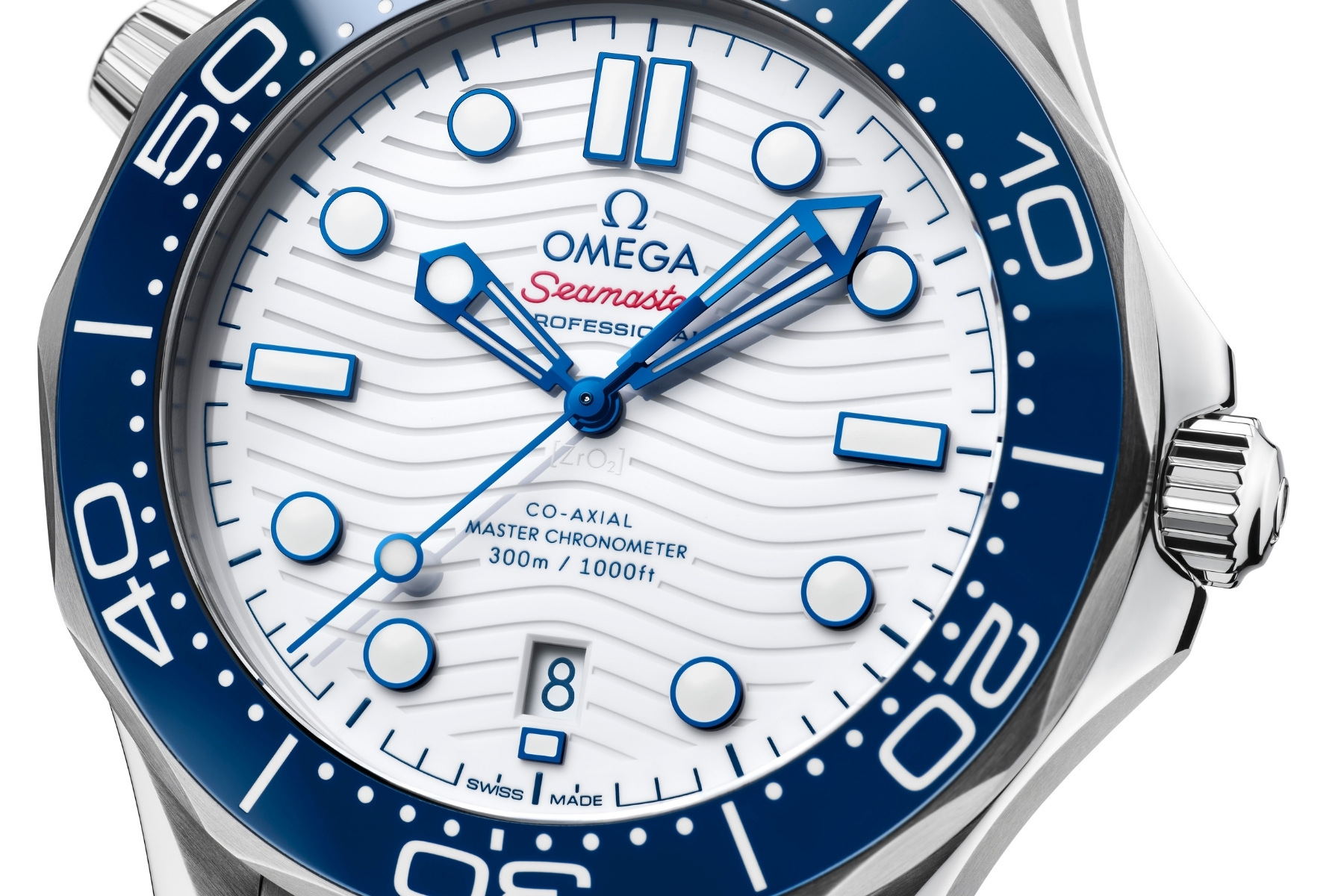 There is a reason heritage brands like Omega have been making different variations of the same dive watches for years. Combining a sporty look with supreme performance, the Seamaster 300M is stylish, timeless, and functional. The essence of this commemorative Seamaster is not only the appearance but also its usability. 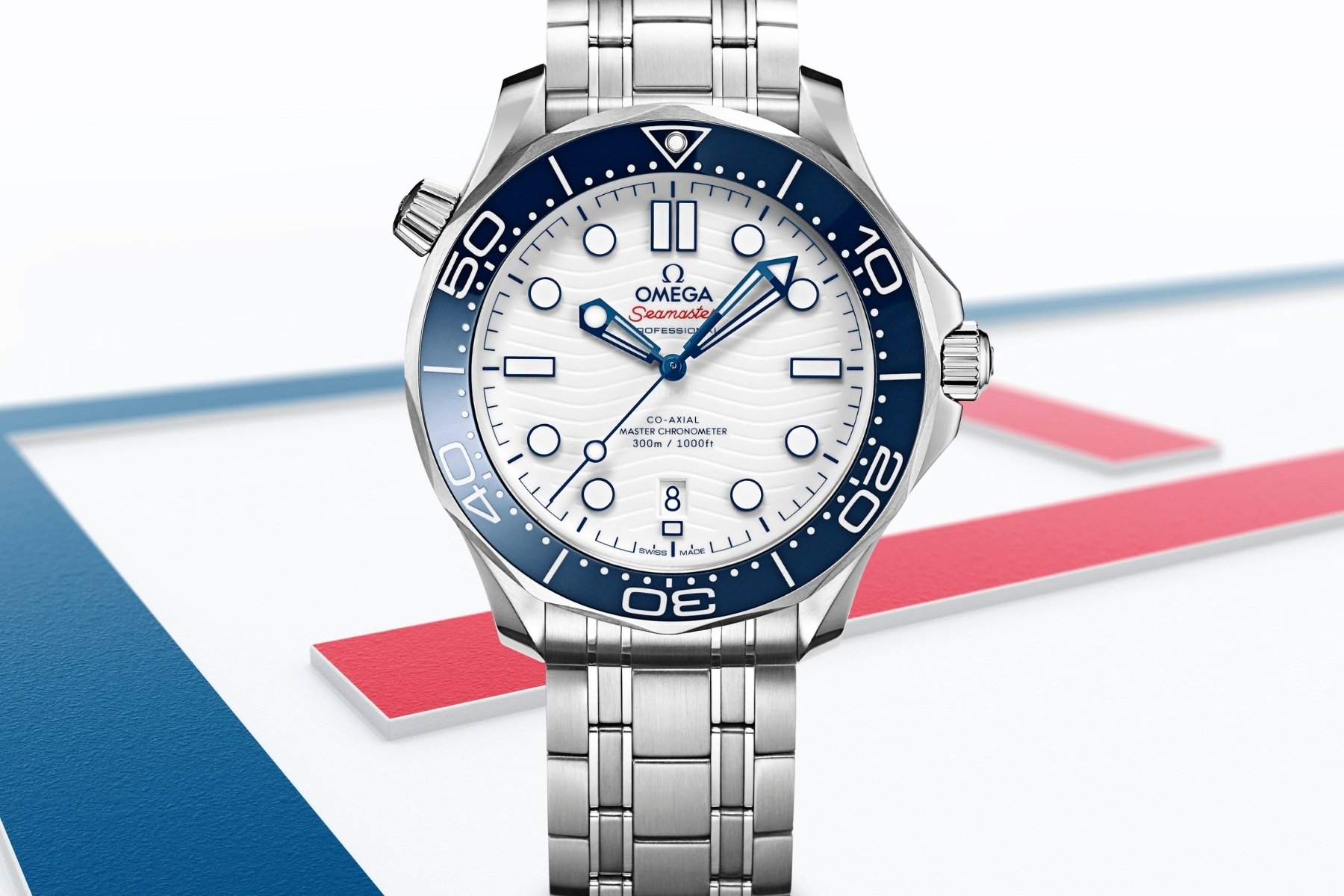 The stainless steel case measures 42mm. A blue ceramic bezel with a white enamel diving scale is simultaneously sufficiently sporty and smart. To keep things fresh, Omega chose the polished white ceramic dial with laser-engraved waves. To add some contrast, the Seamster wordmark is in bright red, making this interpretation even more special. The polished-brushed nine-line bracelet makes an appearance and does a nice job of letting the dial steal the show. 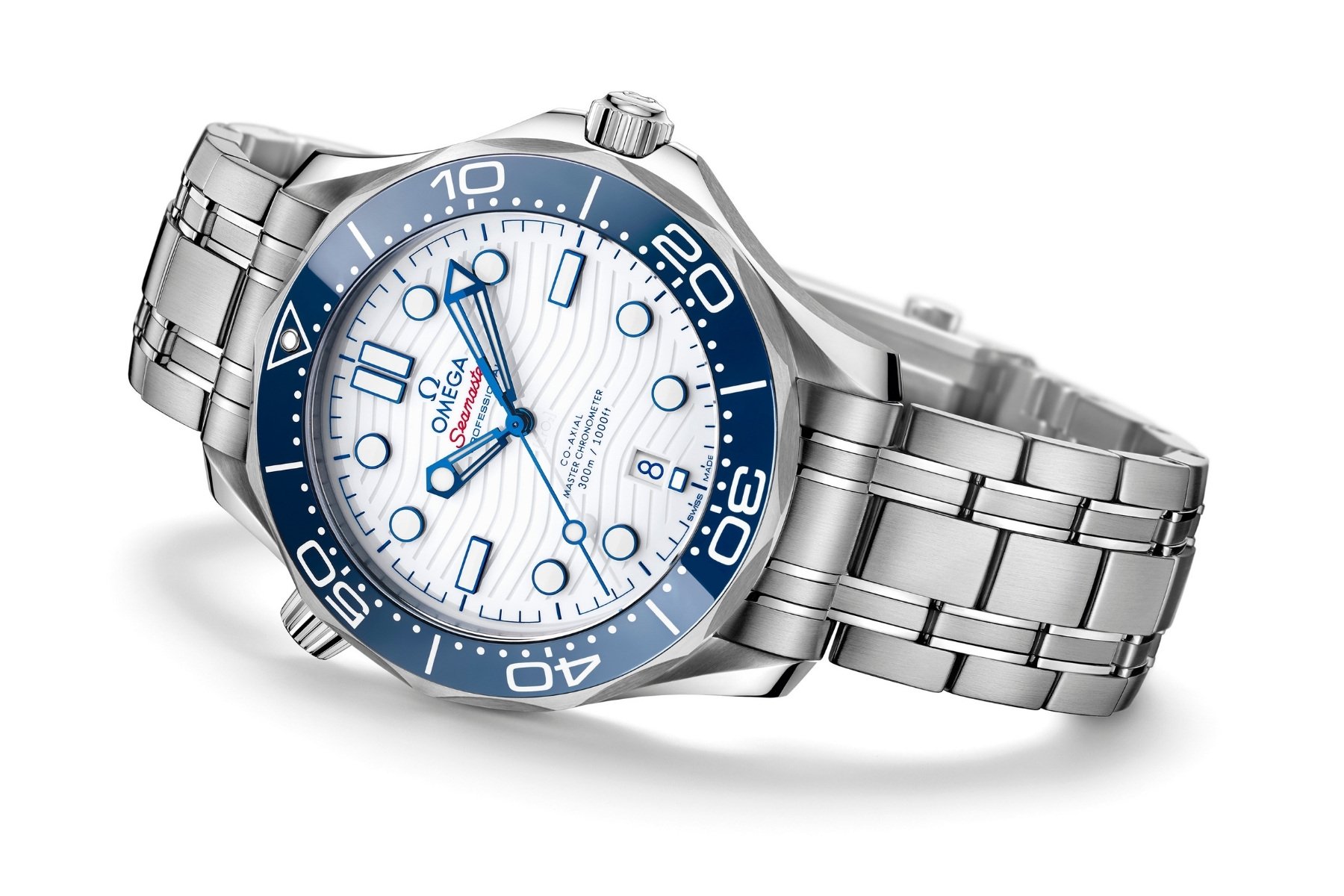 Indeed, there’s a playfulness behind this Seamaster not only visible from the front. Overlaying the scratch-resistant sapphire display window, we find the Tokyo 2020 Olympic Games emblem. The NAIAD locking system guarantees water resistance down to 300m and ensures that all the case back engravings remain correctly oriented.

The Seamaster Diver 300M Tokyo 2020 is installed with the Co-Axial Master Chronometer Calibre 8800. This in-house movement features a Co-Axial escapement and a silicon balance spring, resistant to magnetic influences of at least 15,000 gauss. Moreover, the Calibre 8800 can generate a power reserve of 55 hours. 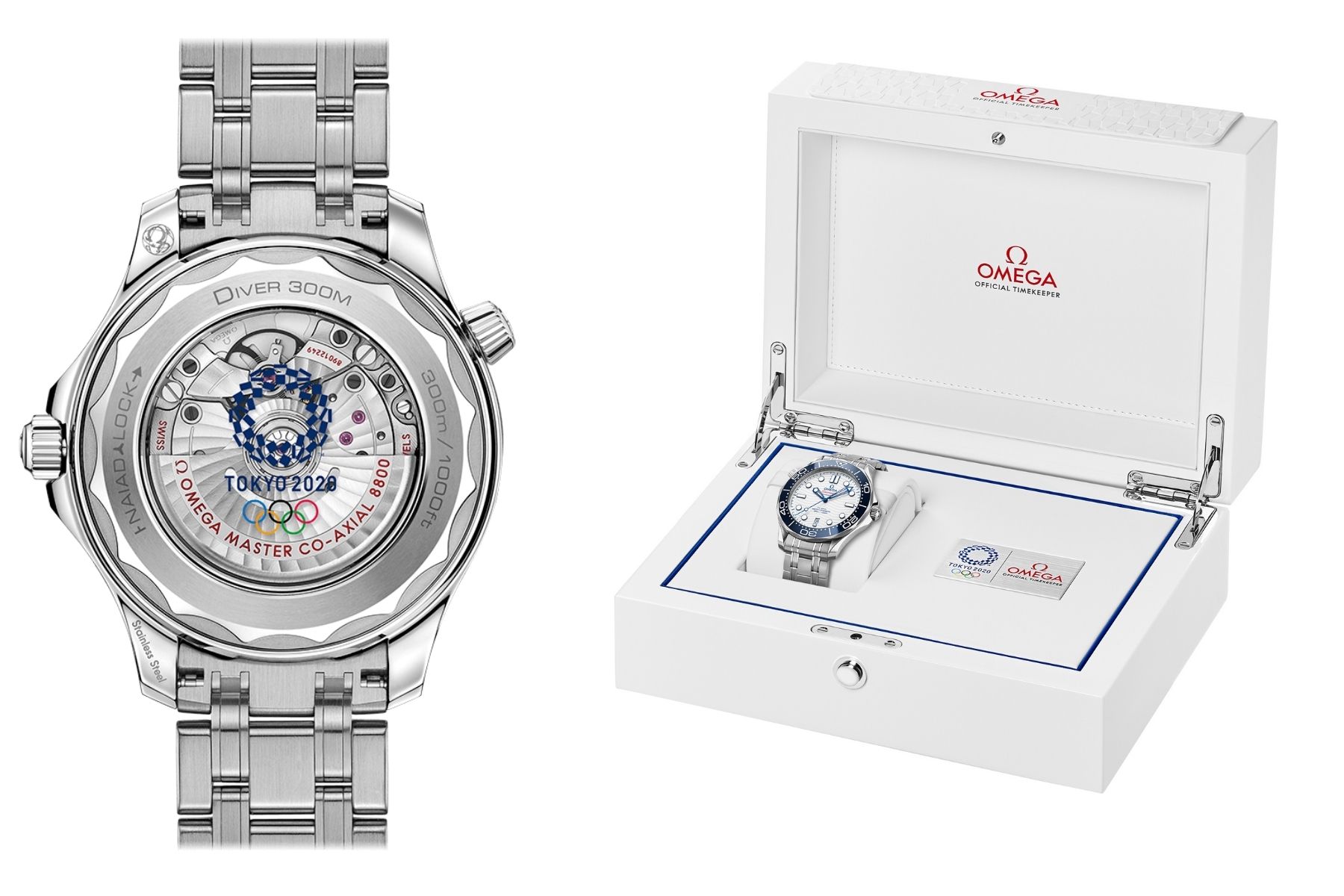 Price, availability, and a special box

The Seamaster Diver 300M Tokyo 2020 reference 522.30.42.20.04.001 has a retail price of CHF 5,200 Swiss Francs. Buyers will receive it with a special Olympic Games presentation box, much like the other Tokyo 2020 timepieces. According to Omega, the new release is already available in Japan. It will appear in boutiques worldwide toward the end of this month. You can find more information on the Omega website.