Whether you’re in the mood for The Land of the Rising Sun during cherry blossom season, or the sensory-overstimulated jungle of neon lights, manga, Maneki-Neko cats, and video games, Tokyo speaks to one’s imagination. These new limited editions for the Tokyo 2020 Games also have a unique vibe to them, which might speak to specific customers.

The Tokyo 2020 Olympic Games are getting closer. I’m quite sure that everyone has heard that this time, the International Olympic Committee (IOC) emphasis on making the upcoming games more sustainable, thus IOC has developed innovative solutions such as the medals made from recycled mobile phones, and electronics, or Accessible People Movers (in partnership with Toyota). But how can IOC afford all the innovations they bear in mind? The Olympic Games are a money-making machine, Tokyo 2020 has generated sponsorship revenues of more than $3 billion so far (it’s three times more than the previous summer Olympics, and this time 62 companies signed sponsorship agreements). Joint marketing structure ensures effective implementation of the goals that IOC has established. Following the tradition, Omega becomes the official sponsor and Timekeeper of the Olympic Games. How did the relationship develop over the years?

Omega sustained support aimed to build up a long-term partnership with IOC and has opened up a big frontier for the development of technology used during the Olympics, but what is even more important, the Swiss watchmaker changed the Olympics forever. By considering Omega just as a watch brand, it might cause losing sight of how much impact the brand had on the sports industry. When Omega developed an autonomous photoelectric cell called the Magic Eye in 1945, the new invention replaced the limited sight capabilities of the human eye and started the era of modern timekeeping. The Olympics types of equipment such as finishing tape, or hydropneumatic tube were no longer necessary. Another revolutionary solution that Omega has invented was the first on-screen clock called Omega Scope for a television audience that has enabled people all over the world experiencing the games with athletes. What’s more, the second generation of the Omega Scope contributed to consider the Olympic Winter Games in Innsbruck as the first fully electronic games.  For the first time, it was possible to compare the performance of several competitors at the same time. Particularly impressive is the fact that Omega was working on this scoreboard with multinational information technology company – IBM, and another Swiss watchmaker – Longines.

The latest innovative solutions that Omega came up with were designed especially for Rio 2016: the upgraded photocell technology that defines more precisely the performance of athletes; the golf scoreboards equipped with radar measurements system that follows the action from the speed and estimated distance of the stroke, to the height of the stroke; and the archery targeting system with a built-in scanning. As you can see, the relationship between the two giants is something more than just a marketing strategy – it’s the singular vision of the future that both players are pursuing. What is the Omega’s vision for Tokyo 2020? 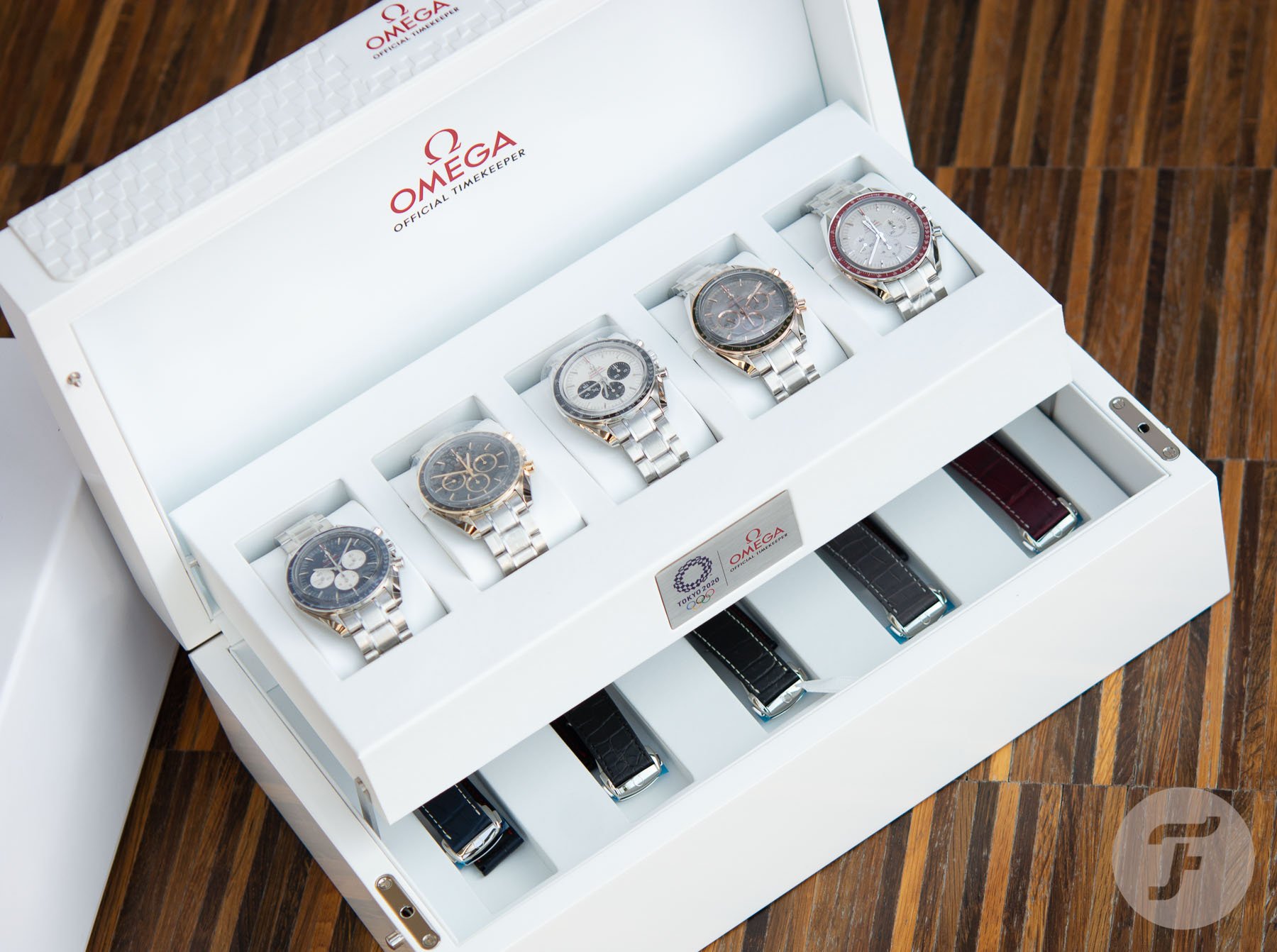 Except for the unveiling of the official countdown clock, the collection of five Speedmasters and these two commemorative watches, Omega hasn’t revealed its plans yet. I believe this is a good reason to focus on these two new watches for now. The Speedmasters designed for Japanese market came as a surprise to all of us – mostly due to the lack of press release (luckily we got a tip from a reader and covered them here first) and the fact that it isn’t available outside Japan. 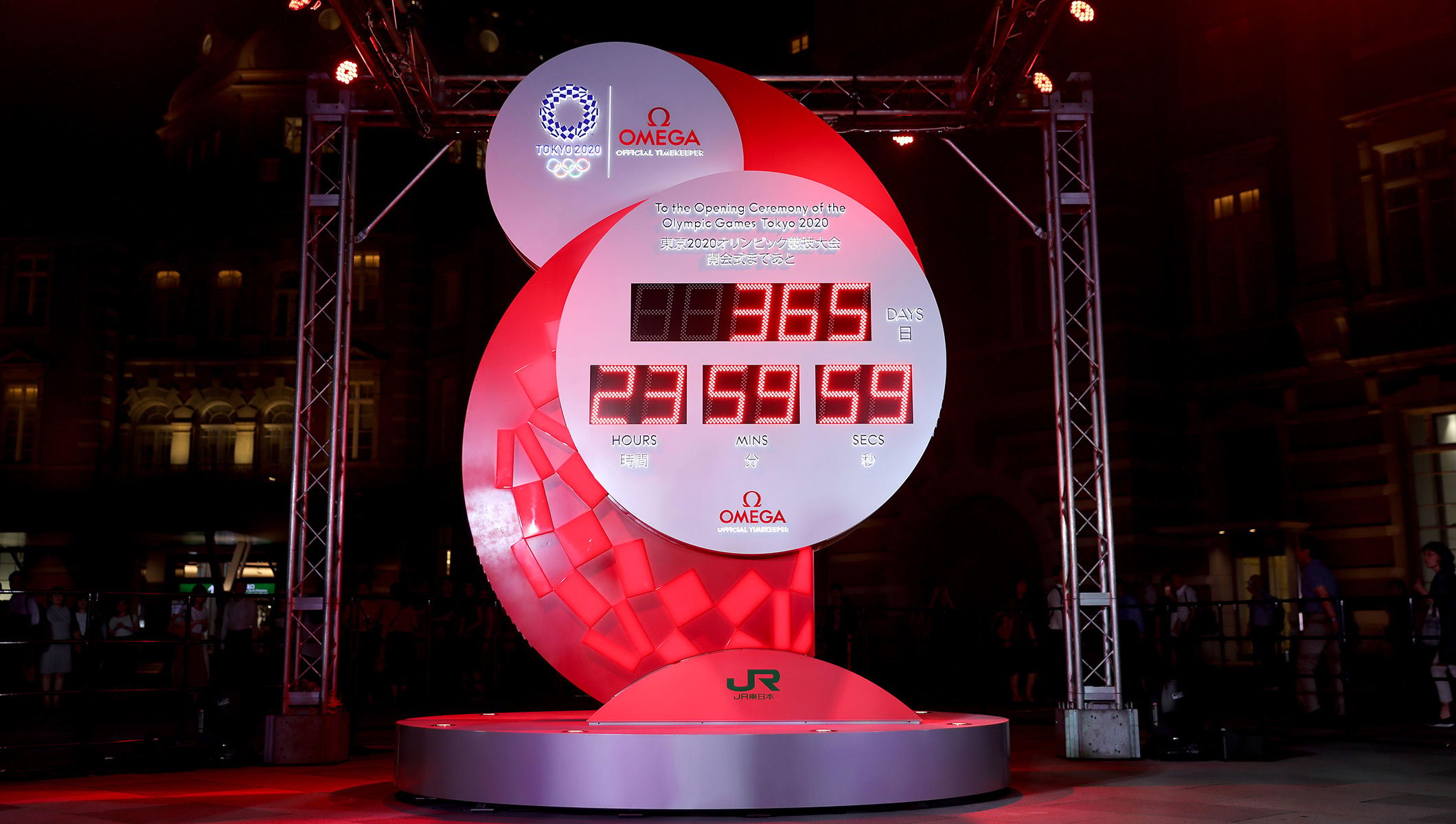 The countdown clock that Omega unveiled a few weeks ago was decisively pitched at the rich Japanese culture, and it is in line with the famous contemporary art influence. In this long-awaited concept that was presented in Marunouchi Central Square (downtown Tokyo), Omega demonstrated that its vision focused on the convergence of traditional Japanese values and contemporary art had fostered creativity. The biggest boom has been in the inspiration that stands behind the design of the four meters high countdown clock – the rising sun of Japan, and ichimatsu moyo (traditional Japanese pattern) got my heart. Omega’s focus has been on creating these special limited edition watches that highlight the brand heritage, but this time their new venture delivered us something more – the value of the critical reflection on art, culture, and nature. I’m passionate about art so perhaps my words might appear to be subjective, especially when we talk about the electronic countdown clock – but I believe (or I want to believe) that the concept behind it was fully-thoughtful. That Omega’s team took the cultural aspect into account when developing the strategy for Tokyo 2020. The same Japanese inspirations were used for the two new limited edition watches. Let’s explore how these traditional motifs were used to develop unique specialities: Seamster Planet Ocean and Seamster Aqua Terra. 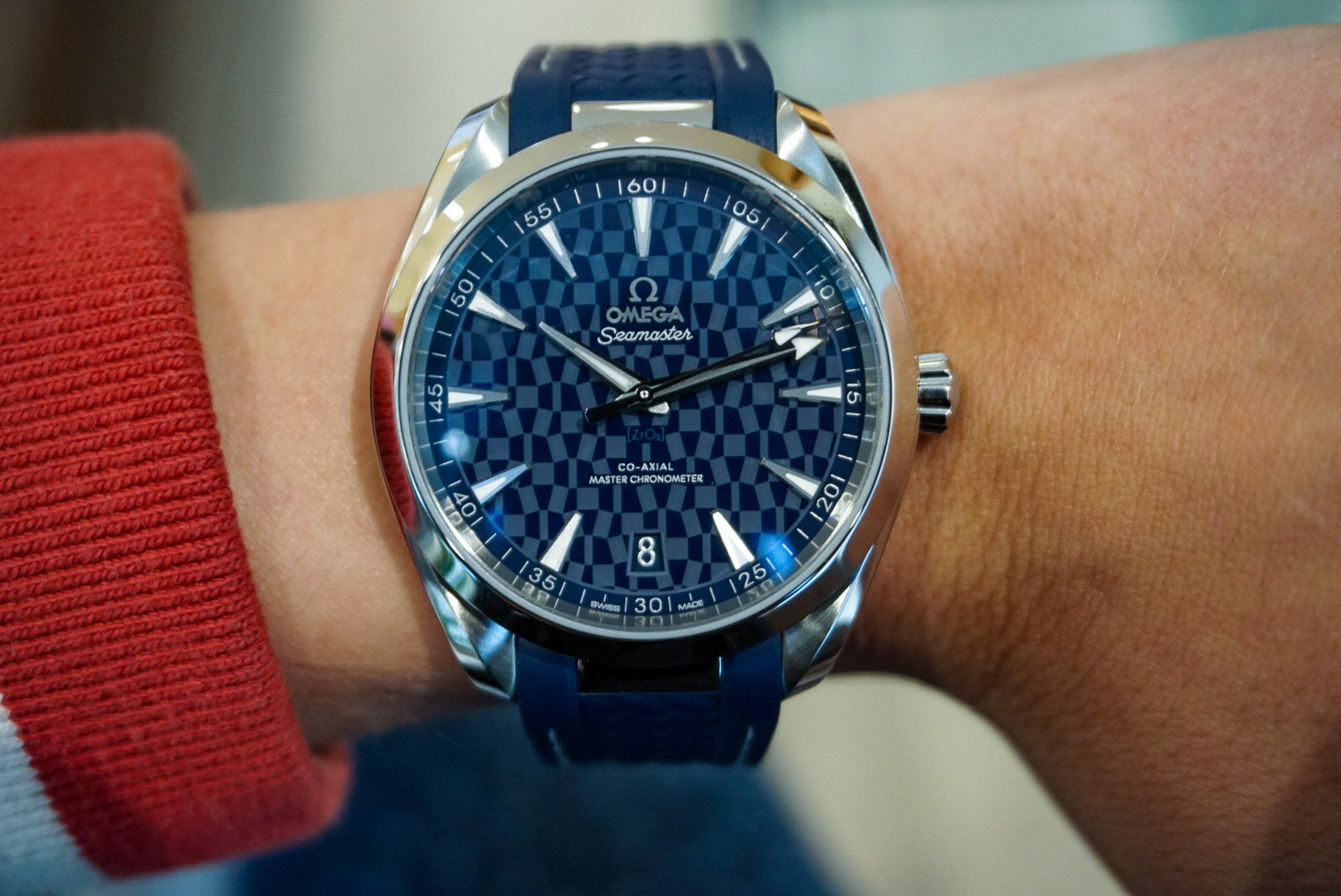 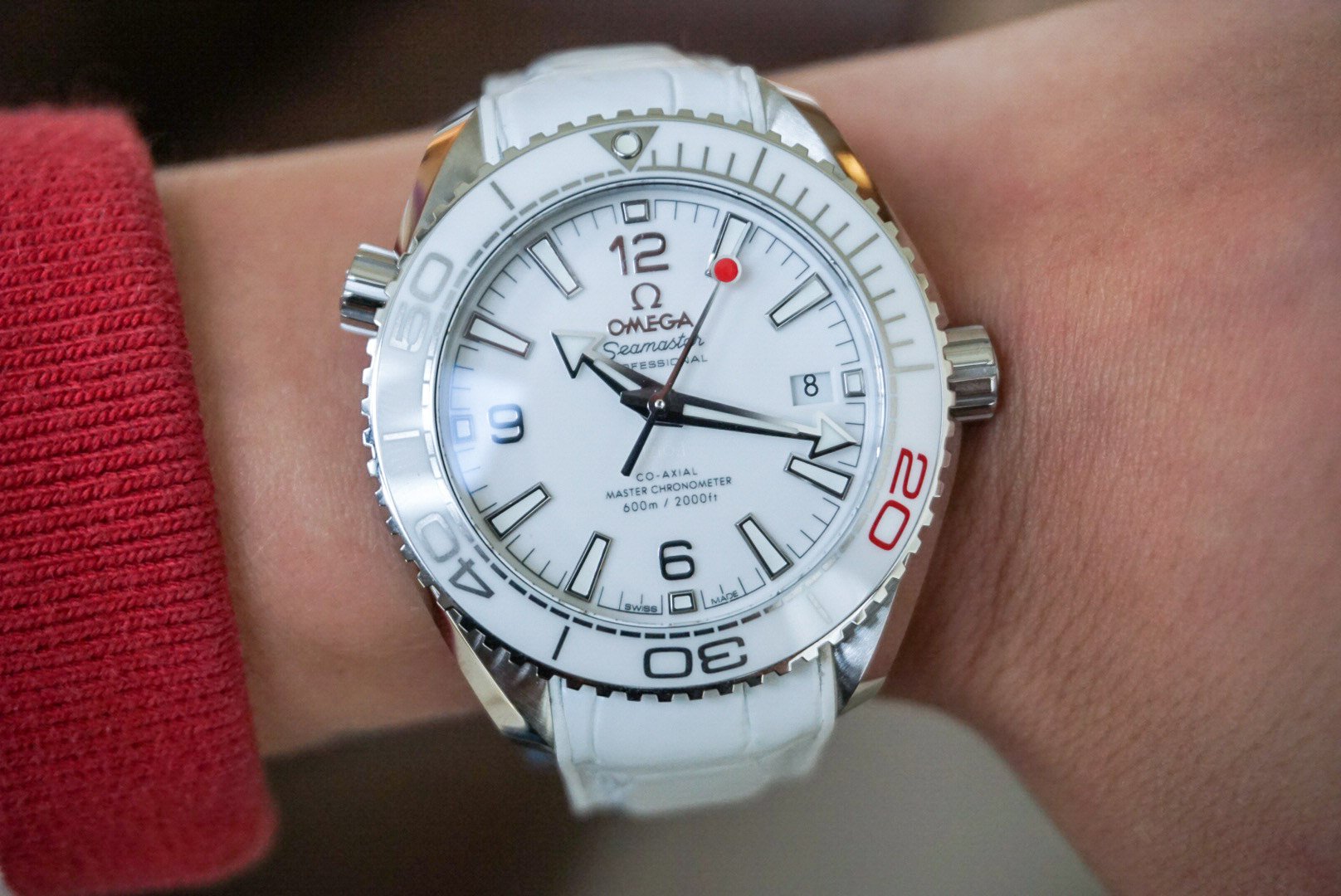 It’s no secret that I generally love Omega watches, but this specific model – Seamaster Planet Ocean, has never been my favourite. So if someone would tell me that Omega is going to make this model the Tokyo 2020 limited edition without showing any pictures of the watch, it probably wouldn’t make a difference for me. When I saw the watch for the first time, I thought that this one might also be problematic for me. Don’t get me wrong, because I adore this watch. It is well-executed from a technical and design standpoint. The Seamaster Planet Ocean Tokyo 2020 takes inspiration from the flag of Japan and has a number of details to mark the special occasion. The polished white ceramic dial perfectly highlights the red lollipop central seconds hand and the sporty aesthetic. The Omega Planet Ocean Tokyo 2020 has a white ceramic bezel with a LiquidMetal diving scale. The number 20 on the scale is in red, to mark the 2020 occasion. The watch has a sapphire crystal case back with the Tokyo 2020 logo, which is a beautiful nod to the Games. But it’s the diameter of the case that is playing the blinder here. The 39.5mm case is quite chunky and wide, but it perfectly fits most wrist, even very thin ones. 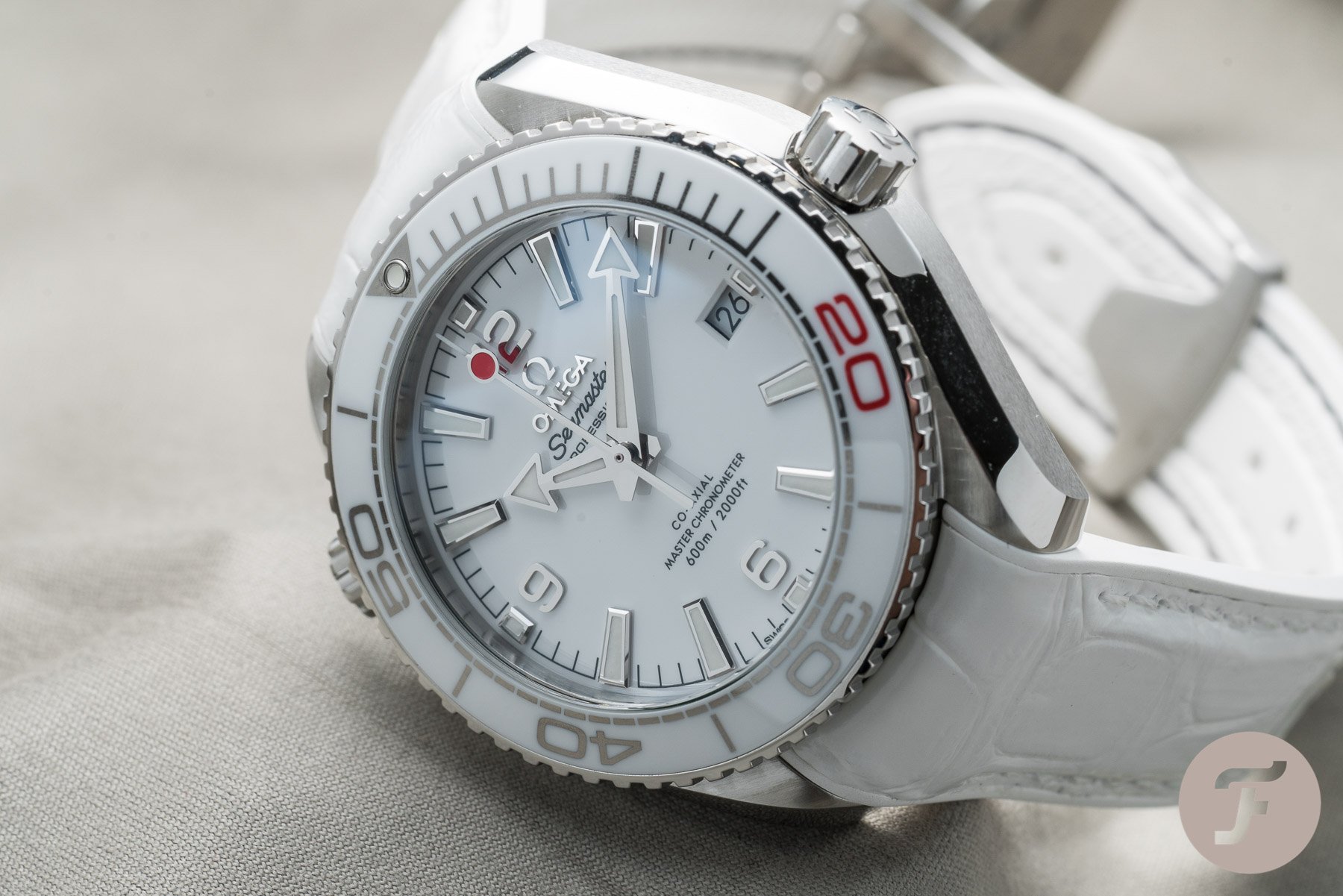 This special edition comes with two strap variations. There’s the leather one, and you’ll get the additional grey nylon NATO strap with white borders as well – and there’s the classic Planet Ocean’s steel bracelet. Omega’s website states the first strap is made of leather while it is made of white rubber covered with impregnated white leather. This might suggest that the strap is suitable for diving or at least swimming. No matter how strongly the leather is impregnated, I doubt it’s suitable for swimming as the fabric attracts water and the impregnation is not enough to to make the strap fully waterproof, and therefore the colour may be changed over time. Beyond that, the strap is very comfortable, for my small wrist is a bit big as you can see above, but still, the whole design captivates. It’s worth noting that the adjustment holes are reinforced with an extra layer of rubber which might be extremely practical. 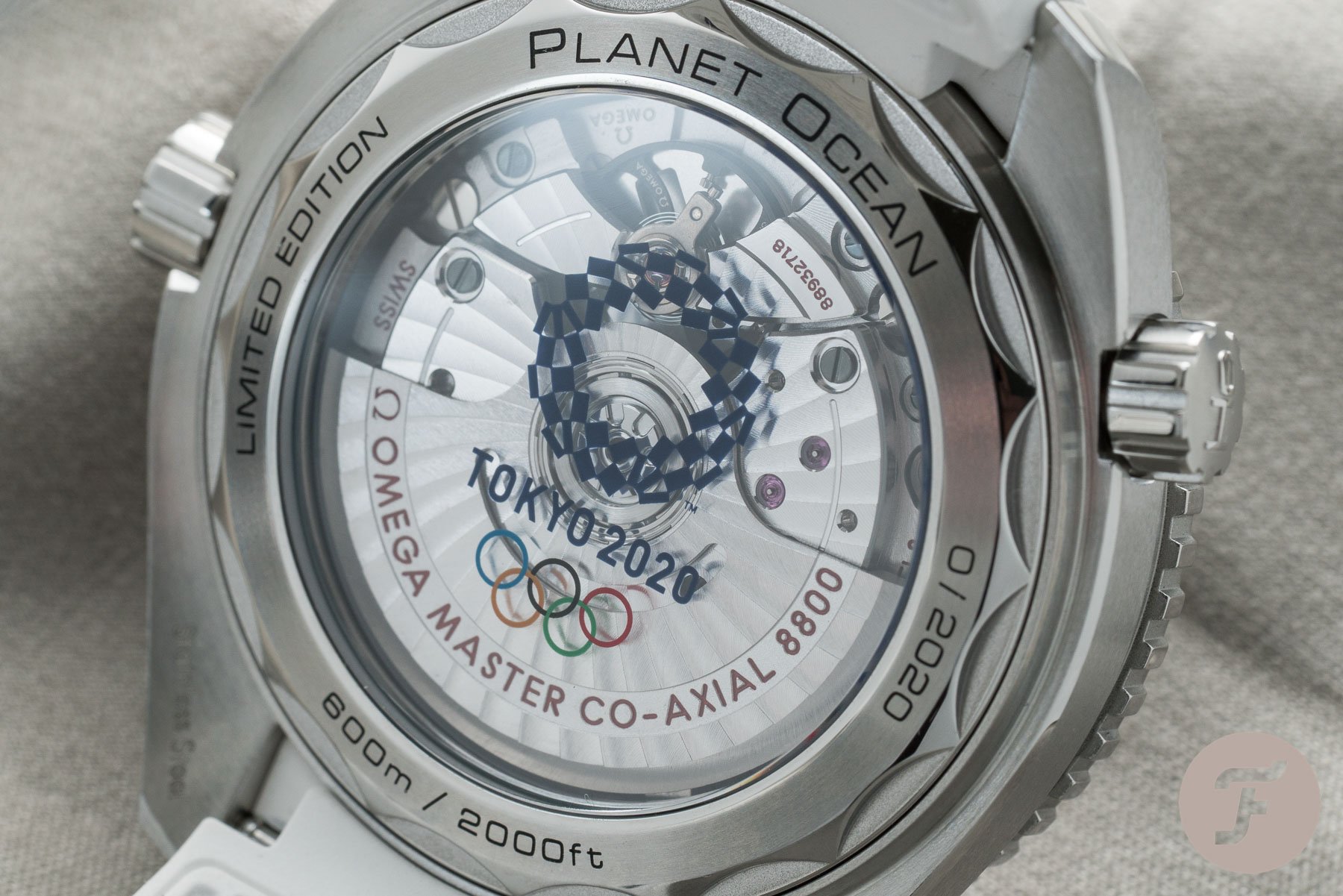 At the heart of this watch is the Omega Master Chronometer Calibre 8800, certified by METAS. As you probably know, this movement is self-winding with a power reserve of 55 hours. It’s also resistant to magnetic fields up to 15,000 gauss. The movement with its Co-Axial escapement has an accuracy of 0 – +5 seconds a day. Not important for a dive watch, the water-resistance of a watch is 60 bar (600 meters). 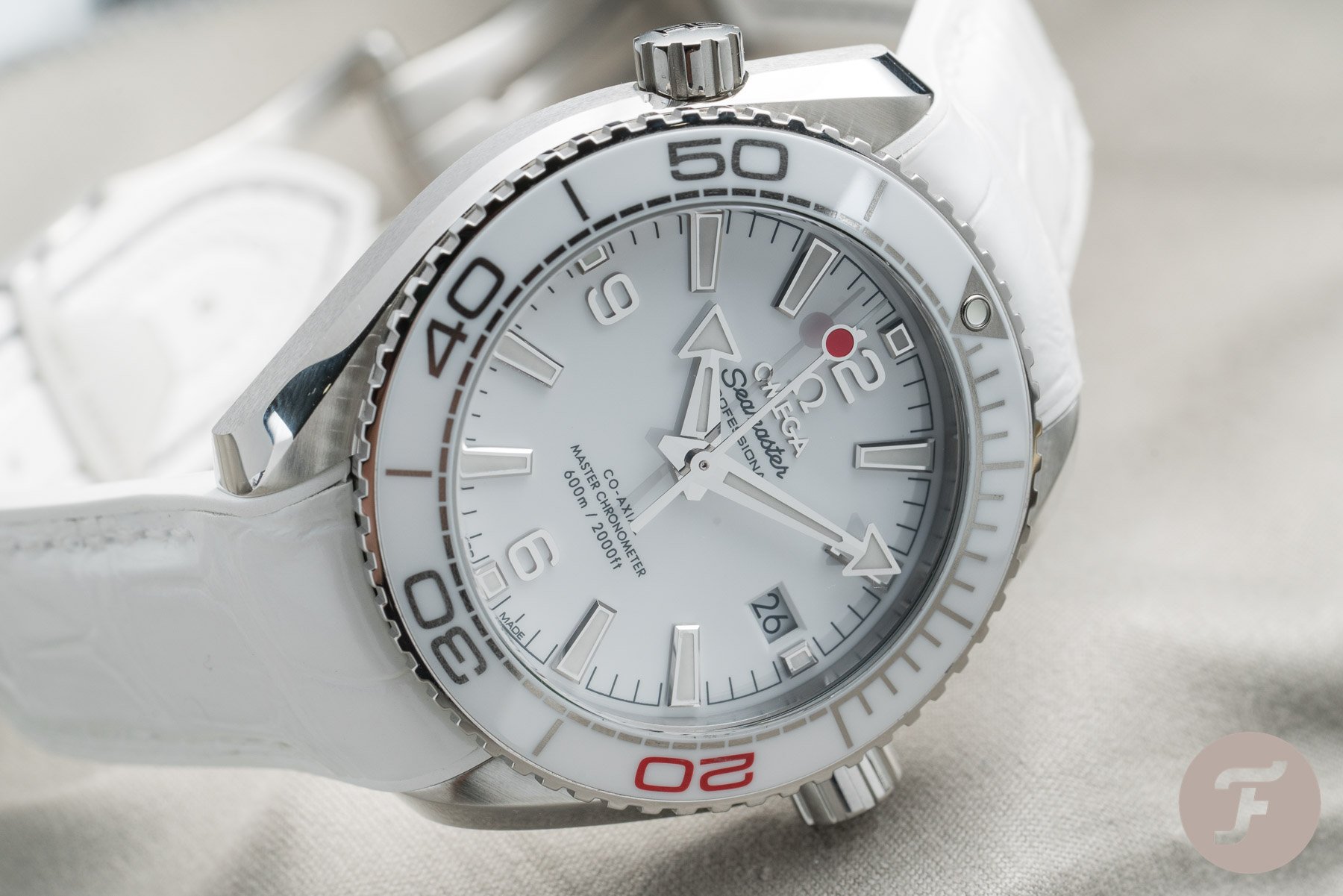 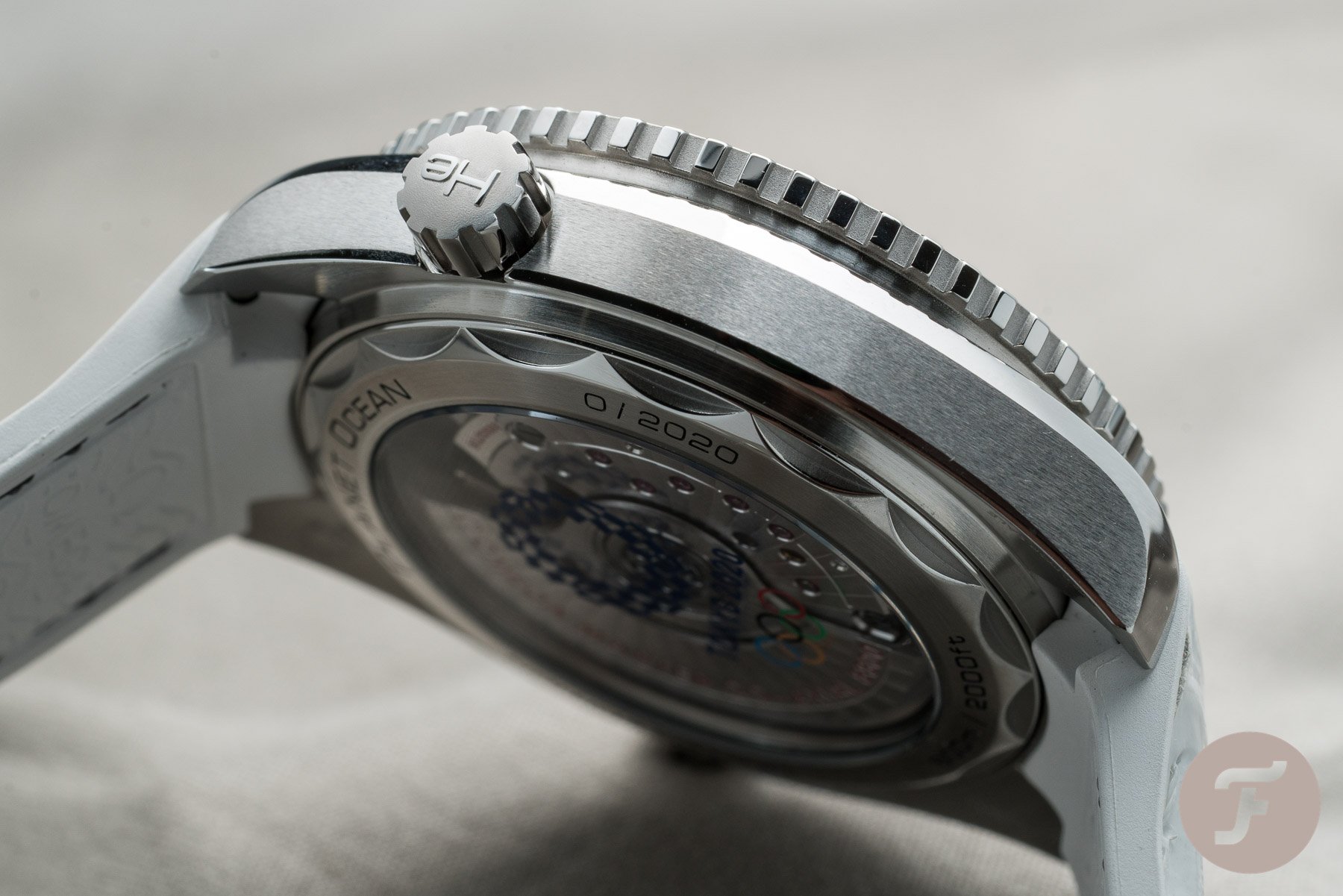 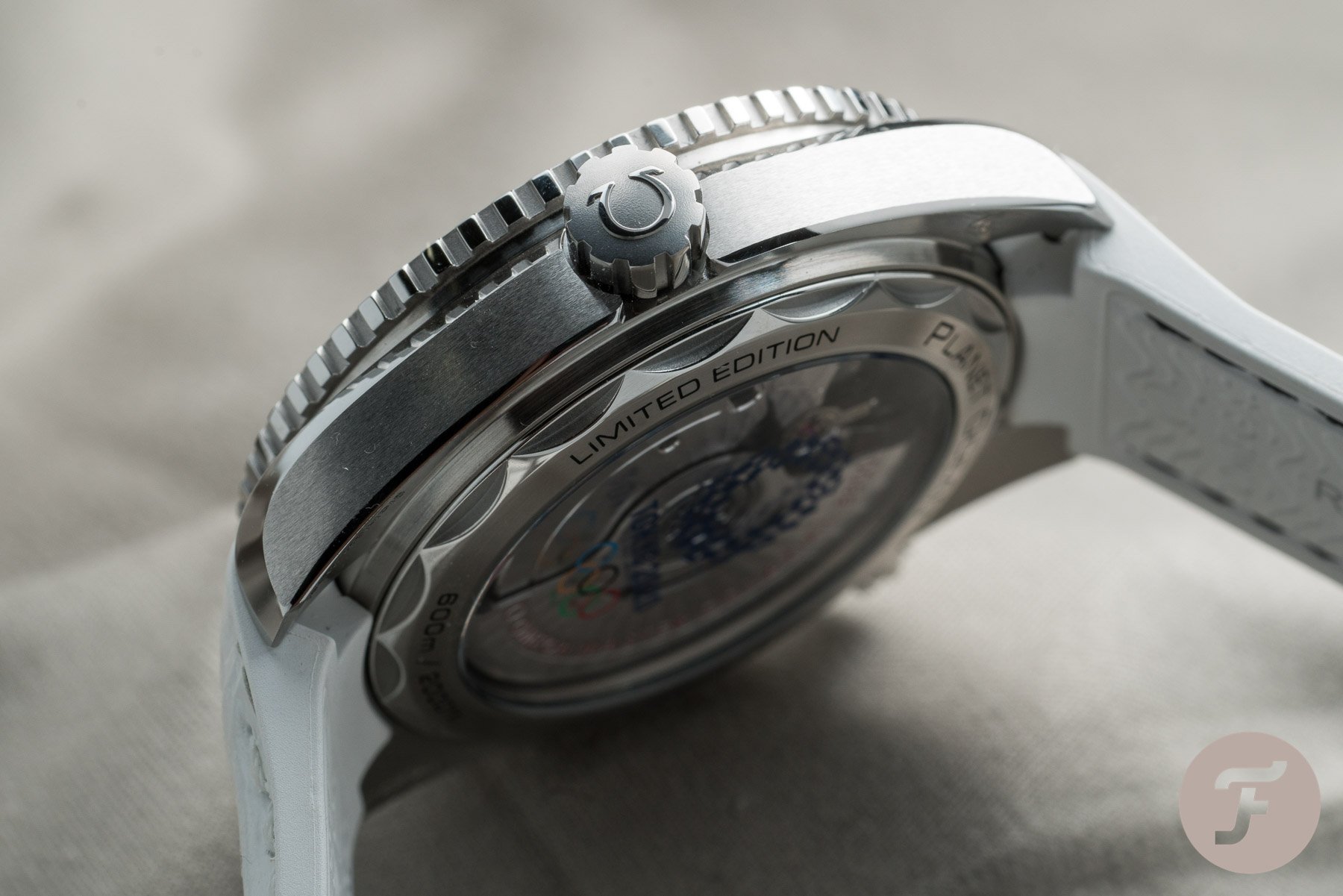 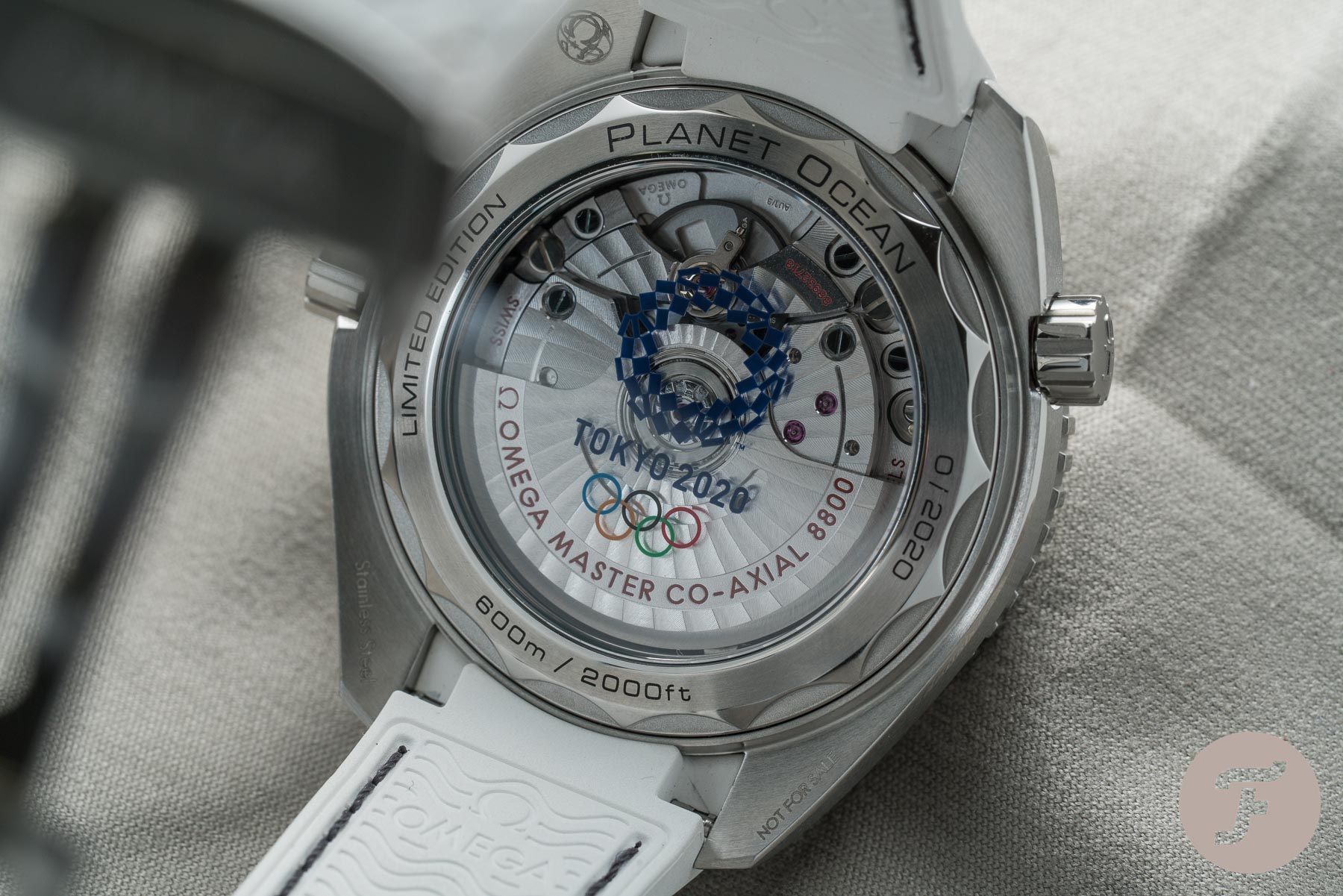 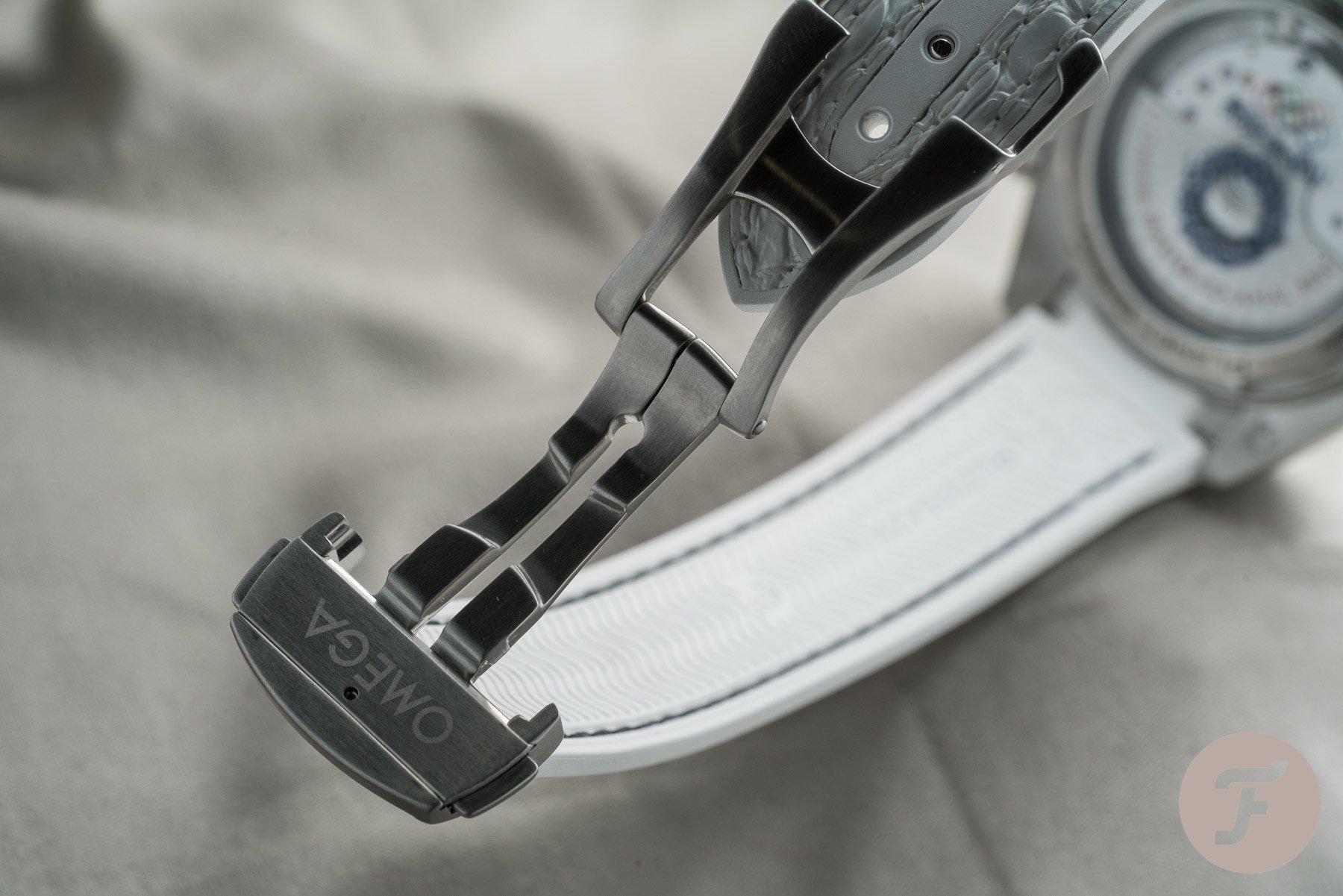 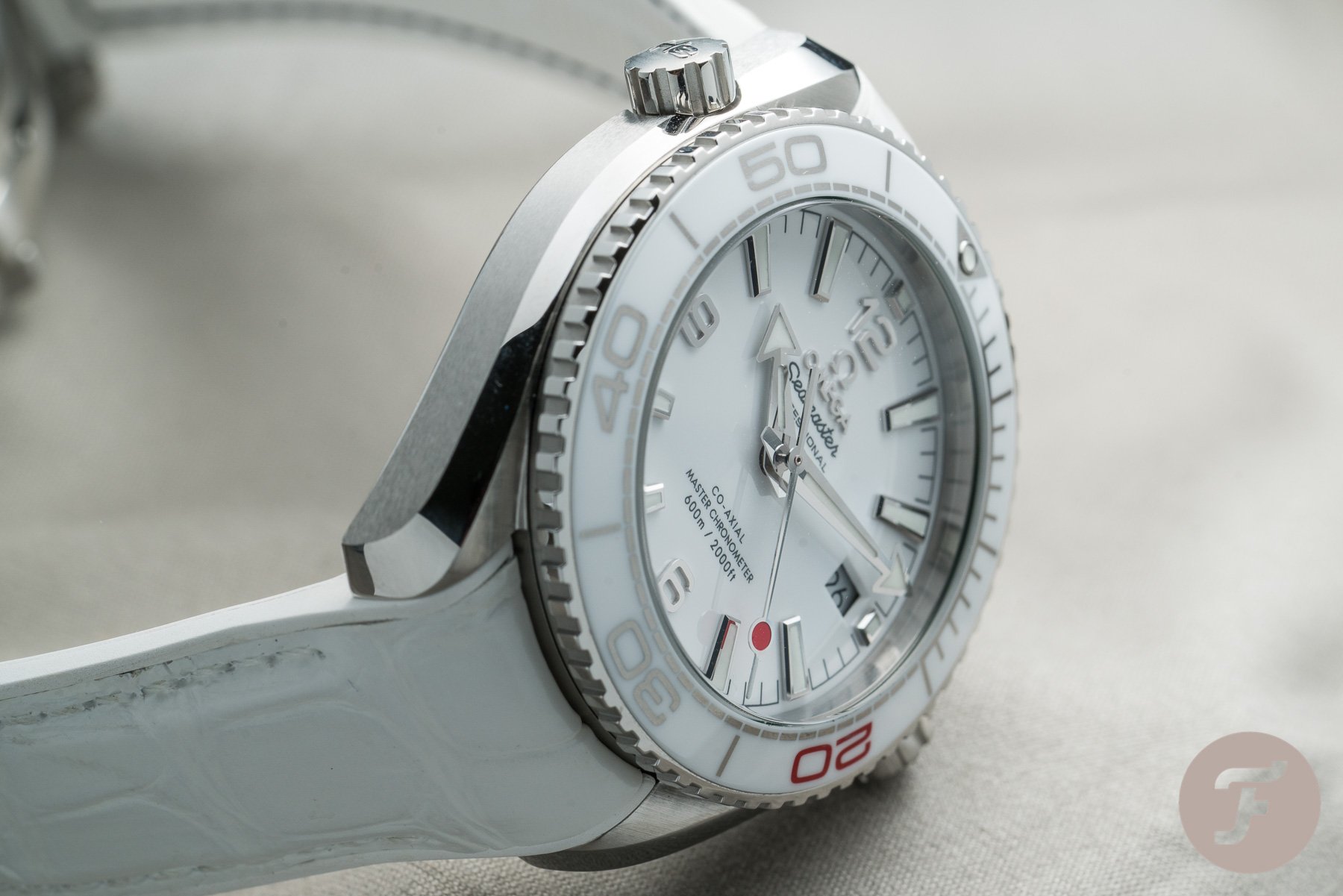 So what are my final thoughts on this piece? It has a lot of swag, and I simply love the design. There are some flaws like the half-leather/half-rubber white strap, but at least the presentation box includes two other options. As I said previously – I’ve never been obsessed with Planet Ocean, but this piece is intriguing and feels fresh!

The other watch designed for the Olympic Games didn’t sweep me off my feet like the first one. The stainless steel Aqua Terra based watch gives us spectacular blue ceramic dial with laser-engraved ichimatsu moyo pattern (which is the part of Tokyo 2020 emblem) – and apparently, that’s the only thing that lures me. The Japanese-inspired design has the lumed hands and markers, and a date display at six. 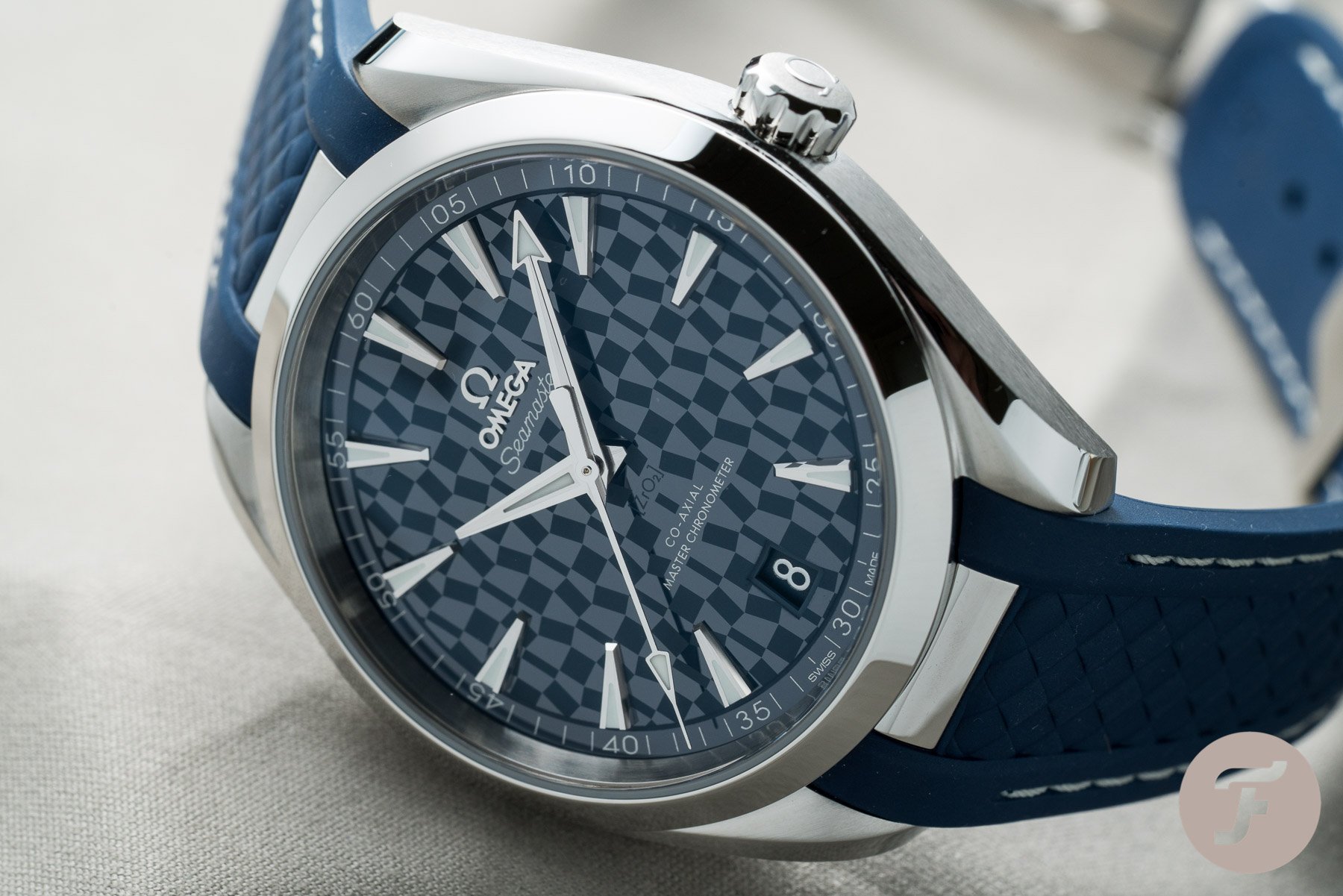 This everyday sports watch is larger than the Planet Ocean – measuring 41 mm, and also the concept is more elegant, even on the navy blue rubber strap. Thanks to its thickness (12 mm) the contemporary and more classic looking case might be undoubtedly a perfect choice for those who love simple lines, and symmetry. Although the dimensions of the case are pretty big, the watch sits superbly on the wrist. 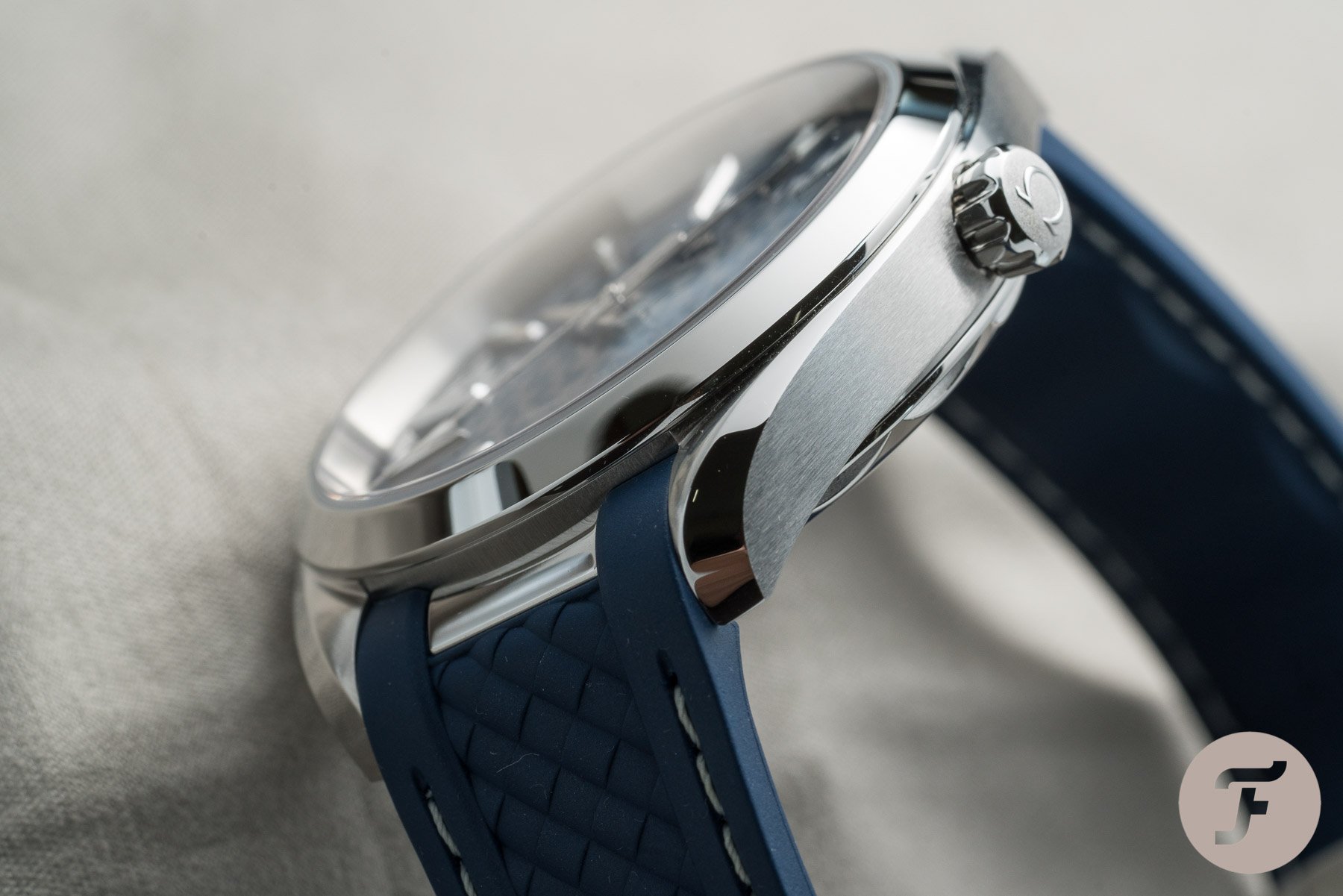 The Seamaster Aqua Terra Tokyo 2020 comes with the navy blue rubber strap and the additional stainless steel bracelet. The bracelet with polished center links, as well as the rubber strap is typical for this model. The first one has a stunning finish and modern spirit – it’s fitted with the clasp with a release button, while the rubber strap with a patterned crosshatch center and white stitching is equipped with folding push-button clasp. For me, the blue navy strap emphases the ocean spirit ethos, which in this case doesn’t exactly fit the concept behind this watch. Also, this strap is far too large for thin wrists, so for those who struggle with too loose straps – try this model with the bracelet. 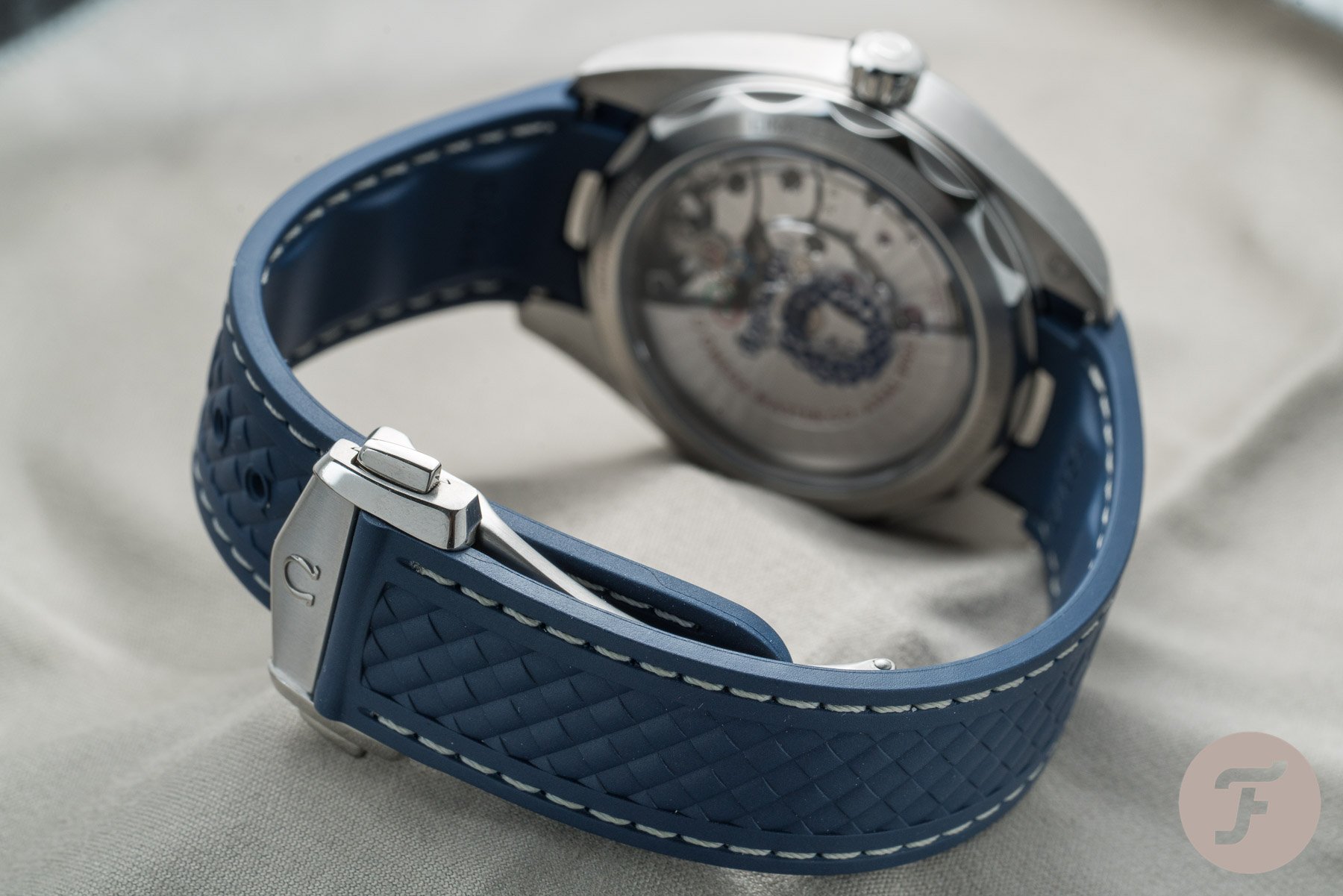 The Aqua Terra Tokyo 2020 is rocking Omega’s caliber 8900 Master Chronometer movement (also used in the Globemaster for example). Identical to the Planet Ocean, the specifications of this movement are excellent – 60 hours of power reserve, the average deviation of 0 – +5 seconds a day, can withstand magnetism up to 15,000 gauss. But what makes this one get a slight advantage is the independent hour-hand. It’s a convenient feature for people who regularly travel. Additionally, the movement has an astonishing design, so it looks lovely through its display back. 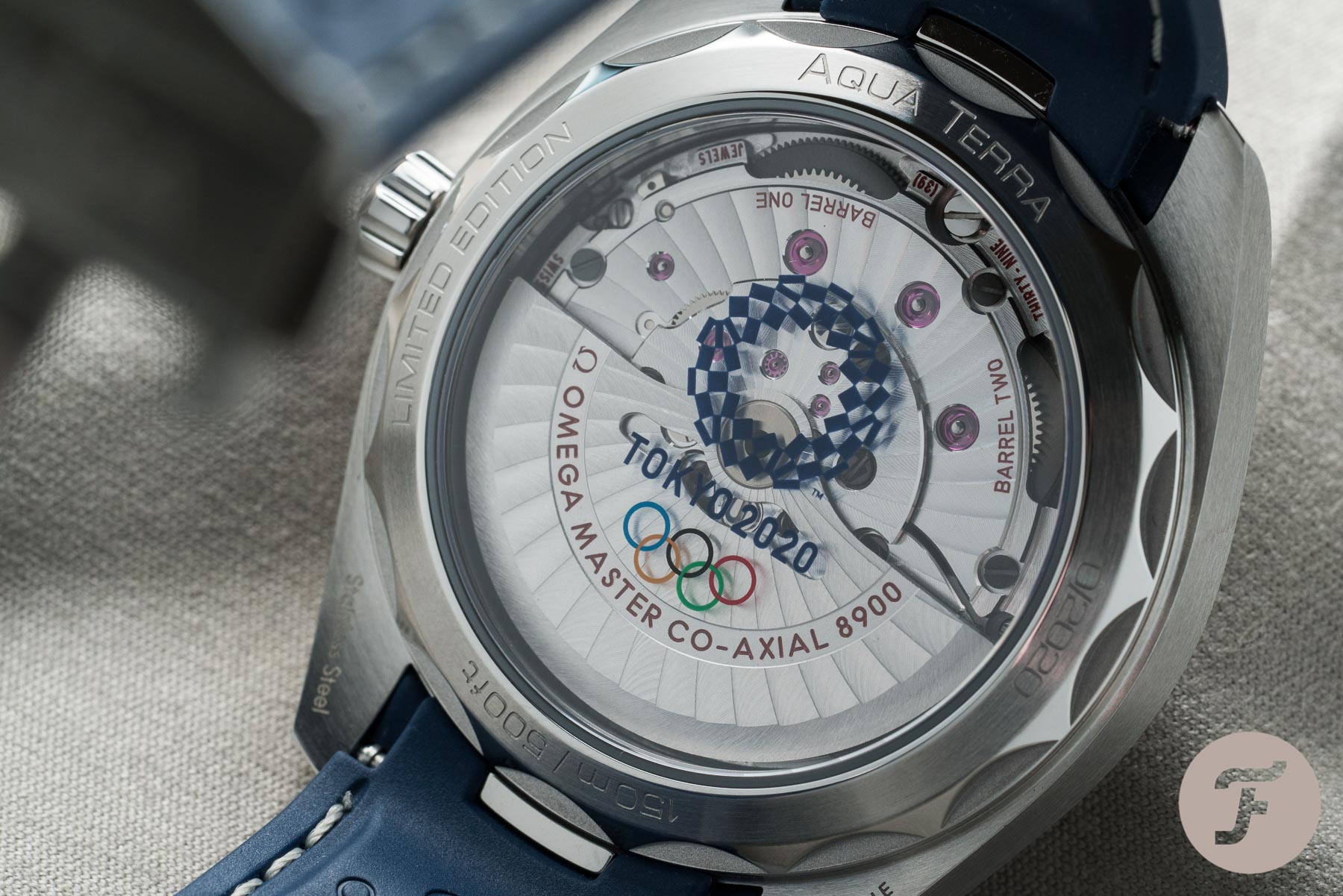 What were my initial thoughts when I try this one on? Indeed, there’s a playfulness behind this Seamaster. As the art has the power to change the world, for me empowering the concept by taking inspiration from traditional Japanese pattern and culture is the essence of this commemorative watch. Unfortunately, this familiar (and way too big for tiny wrist) strap is something that I cannot handle – it doesn’t accentuate the Japanese-inspired design. But, maybe it’s just me and my “watch-lover/art-enthusiast” perspective. 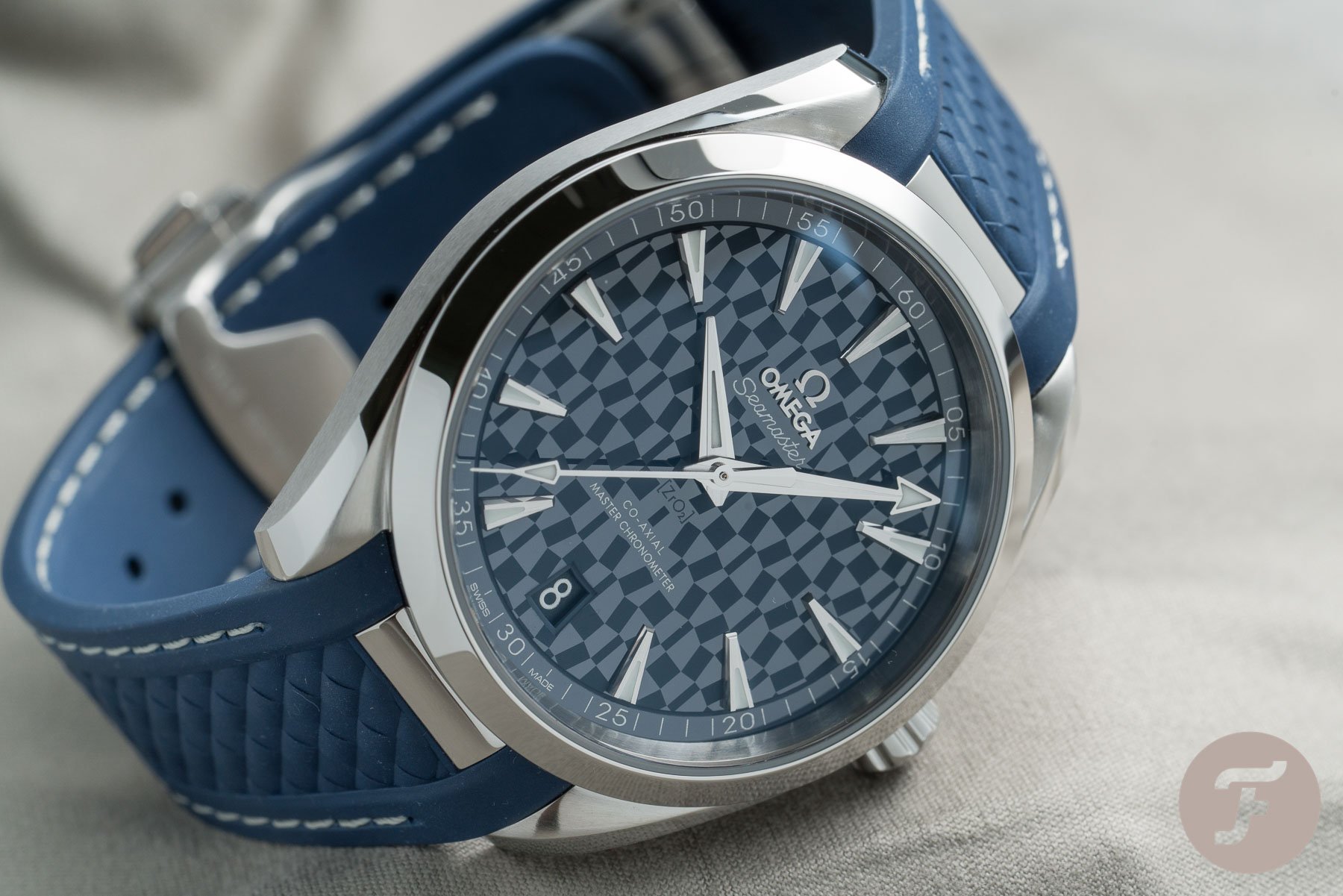 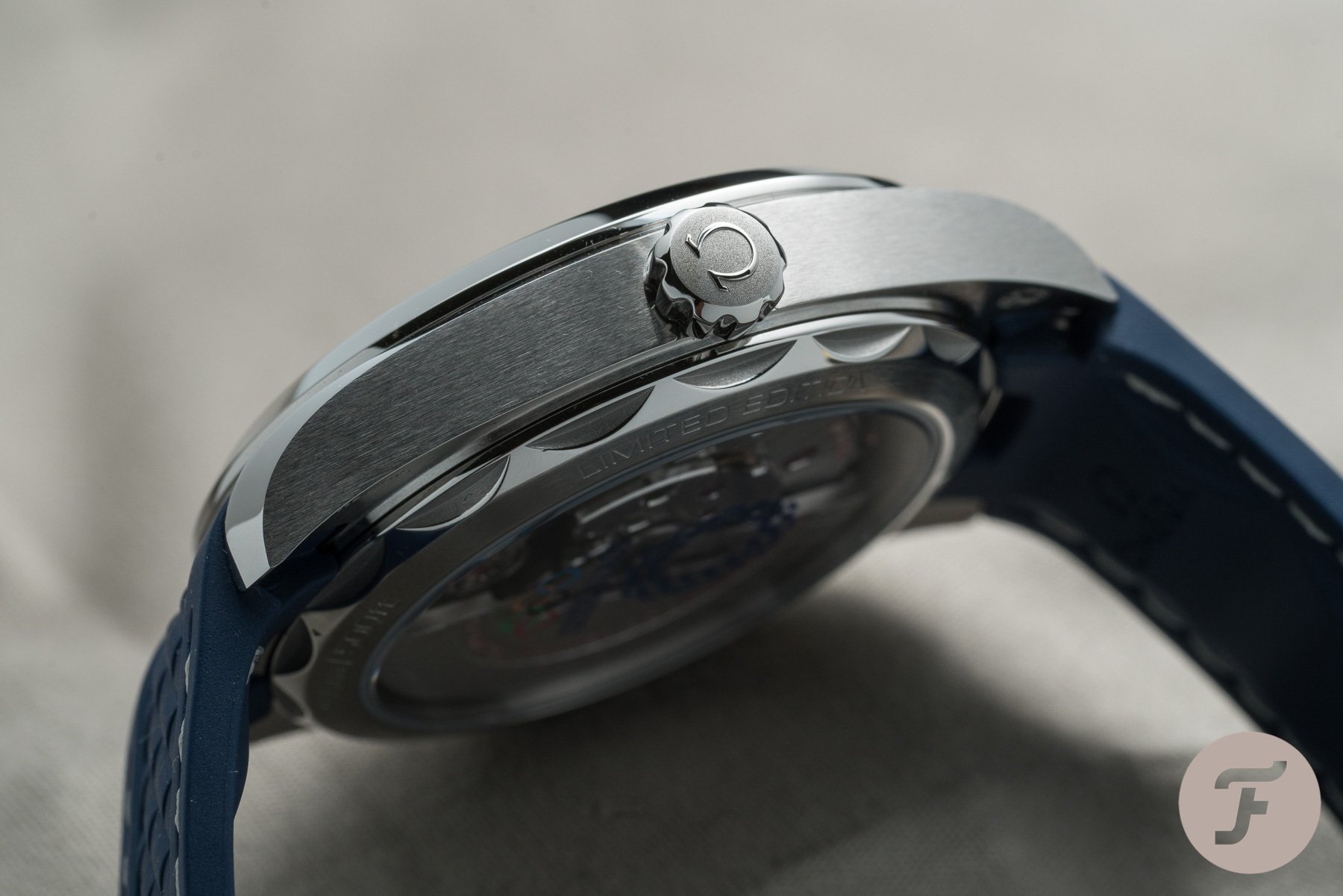 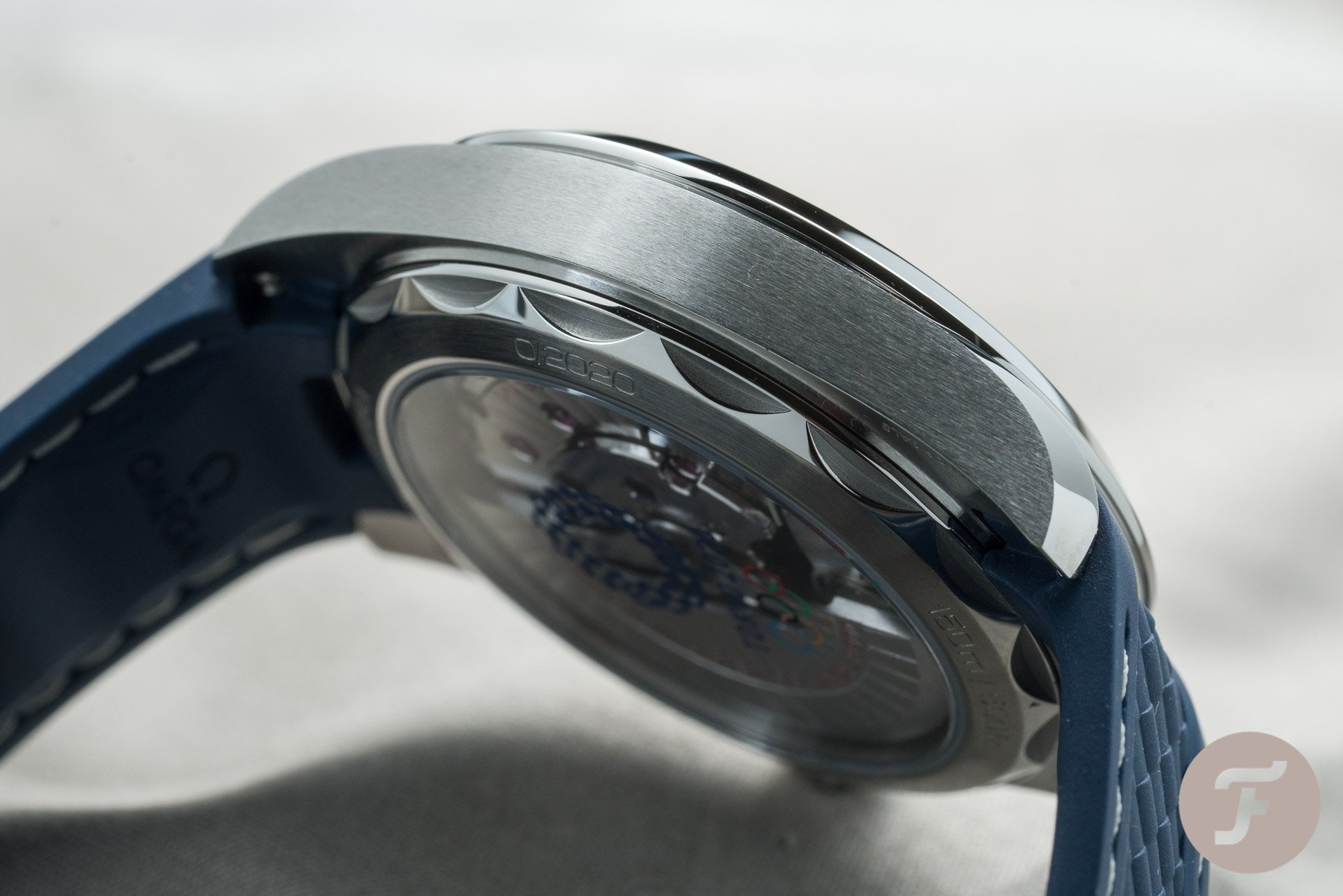 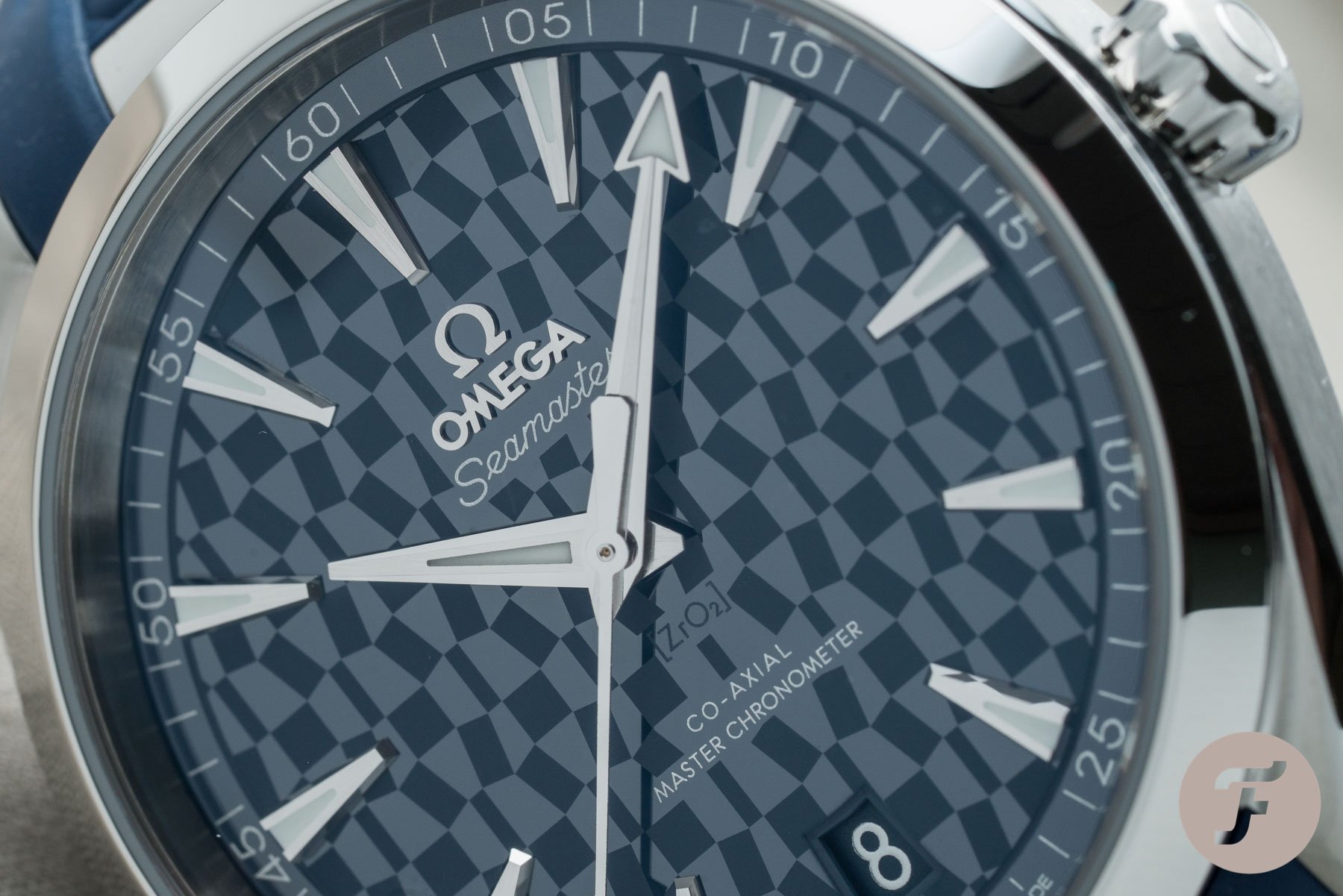 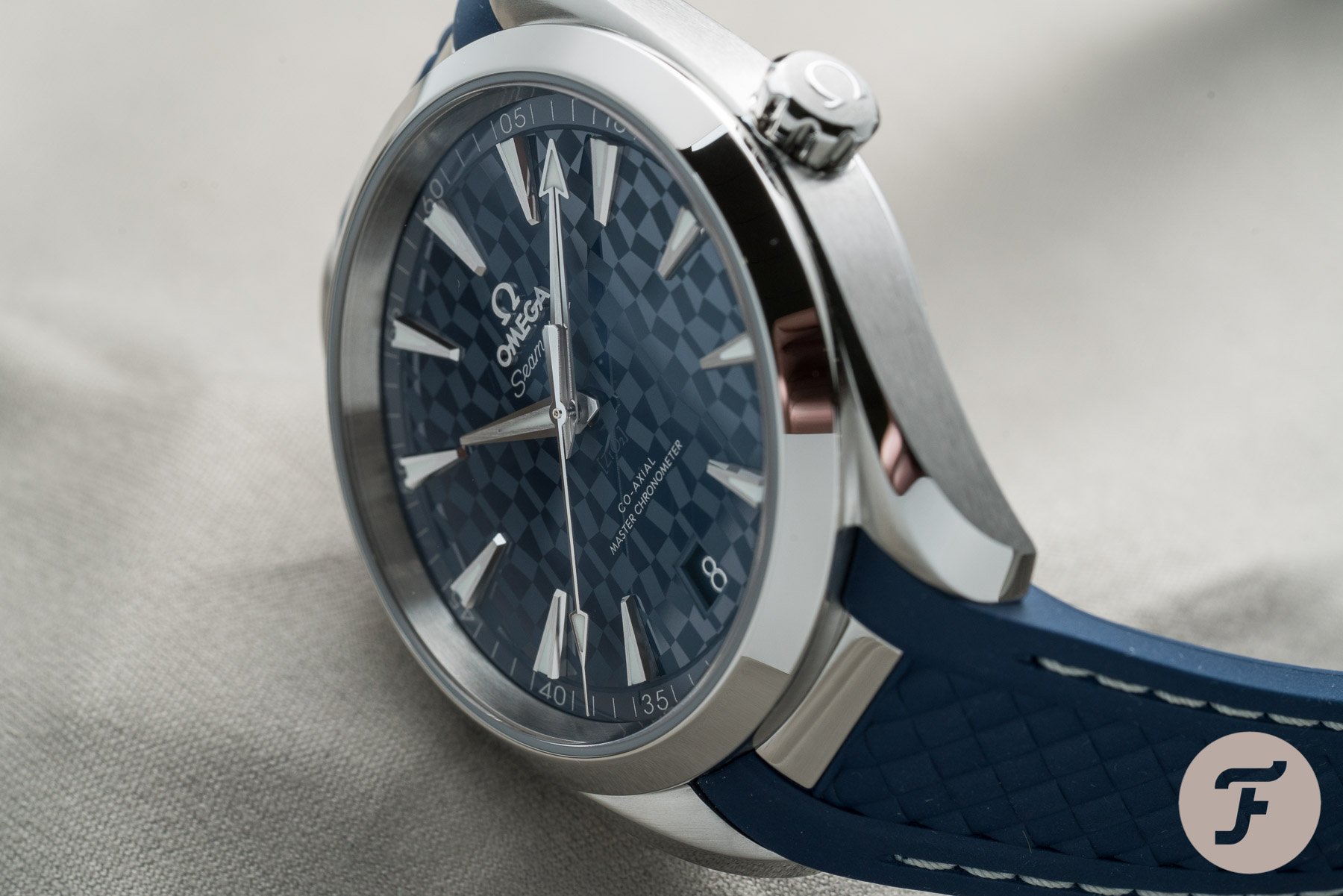 Both, the Seamaster Planet Ocean and the Aqua Terra Tokyo 2020 with their Olympics-style presentation box are produced in 2020 pieces each. Whether you agree or disagree, the quantity of limited editions is part of Omega’s enduring success. And I must admit I’m totally into it – not only for a symbolic interpretation of this number but also for the price that comes with these timepieces. The Aqua Terra carries a retail price of €5900, while for Planet Ocean the price to be paid is €7100. Comparing to the regular editions of these models, the price tags on the limited edition versions are very favourable. Both watches are available only in Omega boutiques.

More information can be found on the Omega website.

Hot Topics
Introducing: The New Seamaster Professional 300M 60 Years Of Bond — With A Special Animated Case Back
105 comments
Are You Still After An Omega × Swatch MoonSwatch?
85 comments
It’s Time To Invest In A Dress Watch — Our Picks From Breguet, Omega, Grand Seiko, And More
72 comments
The Rolex Waitlist Conundrum — How Much Will The Price Of Your Watch Increase While You Wait?
50 comments
The Best Omega Speedmaster Watches Of 2022
40 comments
Popular
Top 10 Rolex Watches – Overview of Models Favoured By Our Readers
Fratello
24
10 Tips For Better Watch Photography
Bert Buijsrogge
11
Hands-On Grand Seiko SBGR311 Limited Edition Review + Overview of GS Service Costs
Robert-Jan Broer
5