It could be argued that since Baselworld 2017, the most highly anticipated new watch releases are actually a trio of very old watches. If you’ve been living under a proverbial rock I’ll help to bring you current; I’m referring to Omega’s 60th Anniversary group of near carbon copies of the original Speedmaster, Railmaster and Seamaster. Perhaps it’s disheartening to new watch designers that these reissued pieces are the talk of the town, but I can assure you that they’re very very good. Personally, and I’ve mentioned this, I have ordered the Speedmaster, but I could be happy with any one of the three. For testing purposes, though, we thought it wise to ask Omega to send different anniversary pieces to different Fratello team members. Naturally, Robert-Jan drew the Speedmaster, Balazs went simple with the Railmaster, and I chose the Omega Seamaster 300 60th Anniversary edition. I wore this watch extensively for several weeks (I even jokingly threatened our friends in omega Germany that I’d keep it until my Speedmaster is ready – the joke fell flat sadly) and I think I’m now in a good position to share my thoughts. 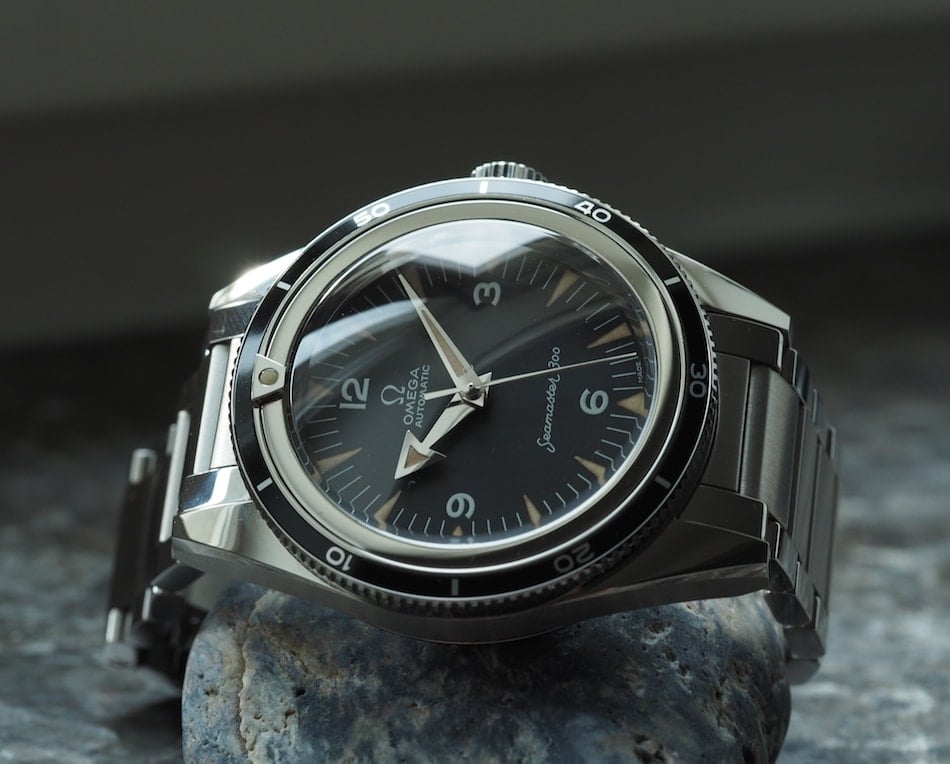 The Omega Seamaster 300 60th Anniversary was Love from the Start

I’m going to write about the Omega Seamaster 300 60th Anniversary in detail, but because I think it’s appropriate to be clear from the beginning, here’s something you need to know. I loved having this watch on my wrist for the roughly three weeks that it was with me. The trio of Anniversary pieces “had me at hello” and little has changed since that time. I saw them several times in Basel, saw them in Frankfurt at the road show, and after wearing it, the watch hasn’t become tiresome. Did I uncover any shortcomings? Let’s see… 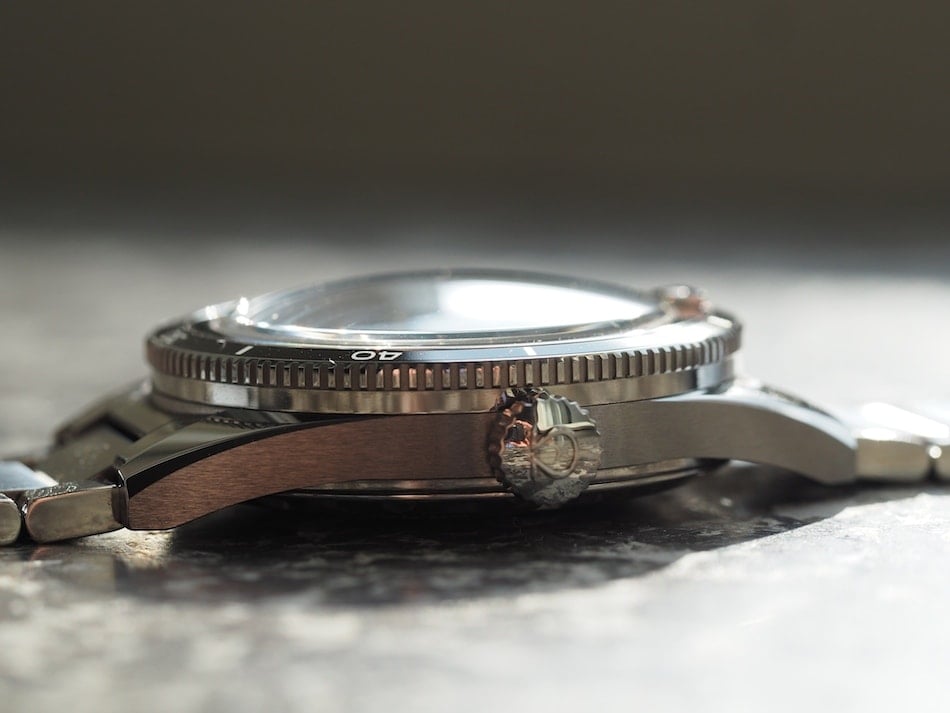 When Omega first showed us the trio of pieces at Baselworld 2017, they explained that they had used scanning technology in order to create watches with the exact same dimensions as those from 60 years prior. Despite the dimensional exactness, the Omega Seamaster 300 60th Anniversary, based on the original CK2913, does make a concession to modernity. The highly domed crystal with boxed sides is made of sapphire instead of sticking to the original’s acrylic. Some might decry this, but since the Seamaster is a dive watch capable of 300 meters of water resistance, the modern material makes sense. Plus, it’s probably one of the best examples of a sapphire crystal taking on a complex shape to mimic plastic. 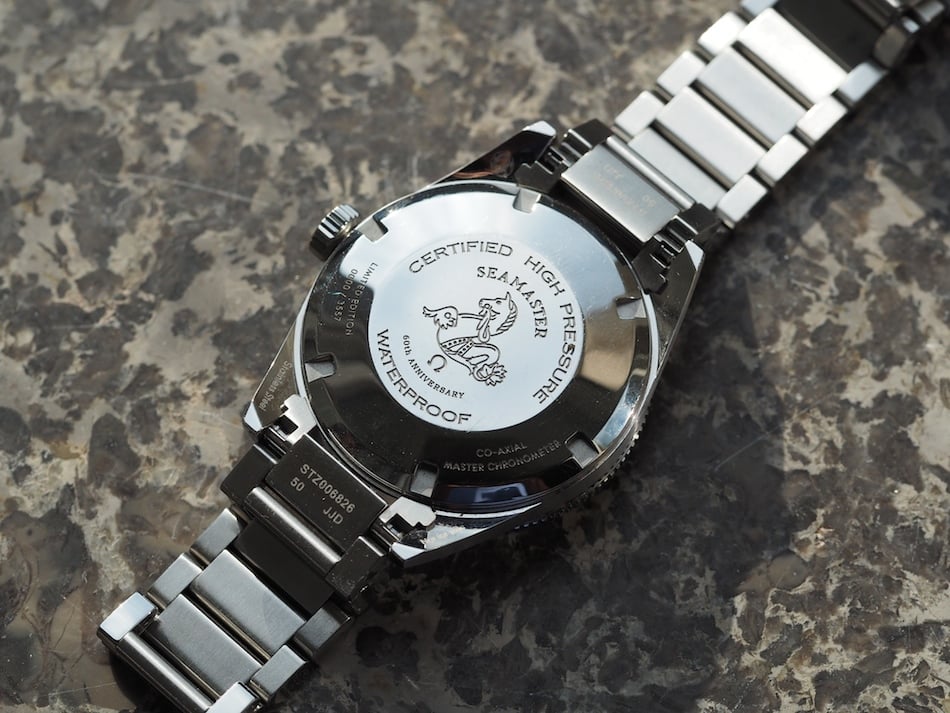 A less noticeable attribute of the Omega Seamaster 300 60th Anniversary is the fact that the case back always aligns the seahorse logo perfectly. Omega introduced this closure across most of its new pieces this year and it’s a nice touch. Speaking of closures, the Seamaster has a screw-down complete with the old logo and a small “T” in the middle indicating the old “NAIAD” closure. Using this crown was a smooth and high quality experience when I hand wound the movement and set the time. 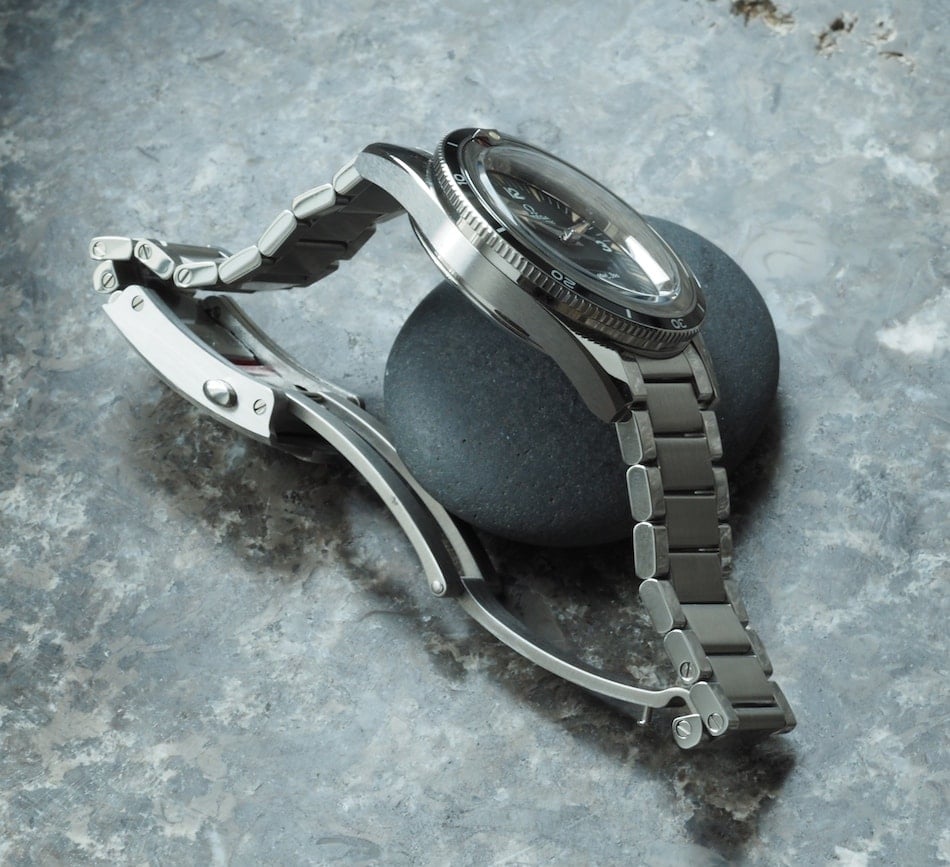 Movement-wise, Omega chose the modern 8806 calibre automatic with co-axial escapement. It’s a Certified Master Chronometer complete with 15,000 gauss METAS approval. This was a nice choice as the movement fits perfectly into the original size case. Plus, Omega chose only to adorn the case back with any movement information and resisted any temptation to populate the dial. 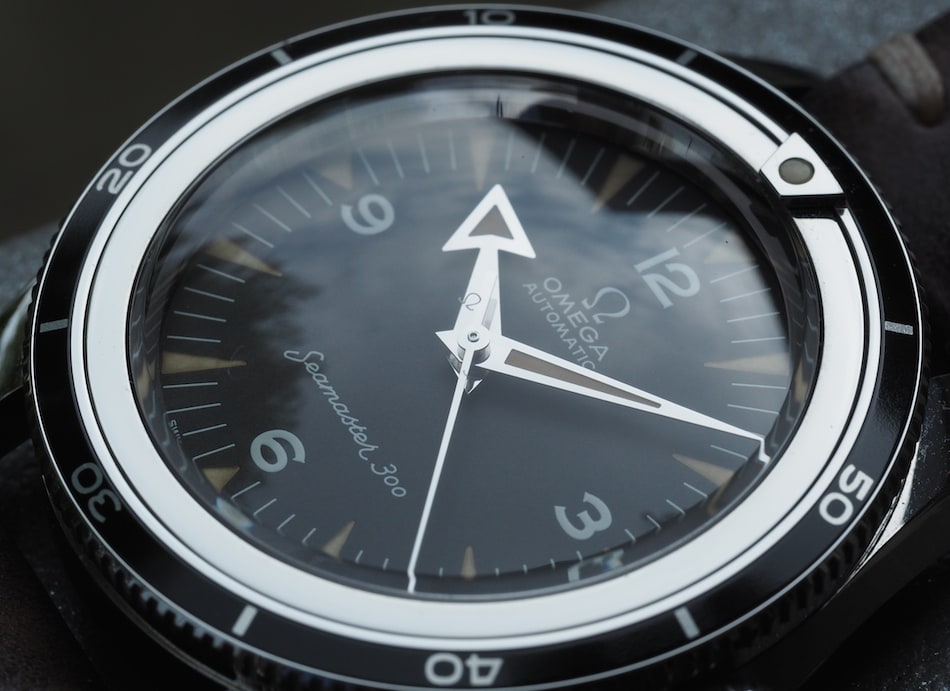 The dial, and the hands for that matter, is a controversial topic. There are plenty of people who seem to hold some serious hatred for the cream-colored Super-LumiNova. To me, though, this is a thing of beauty and it’s done so well that it honestly looks old. 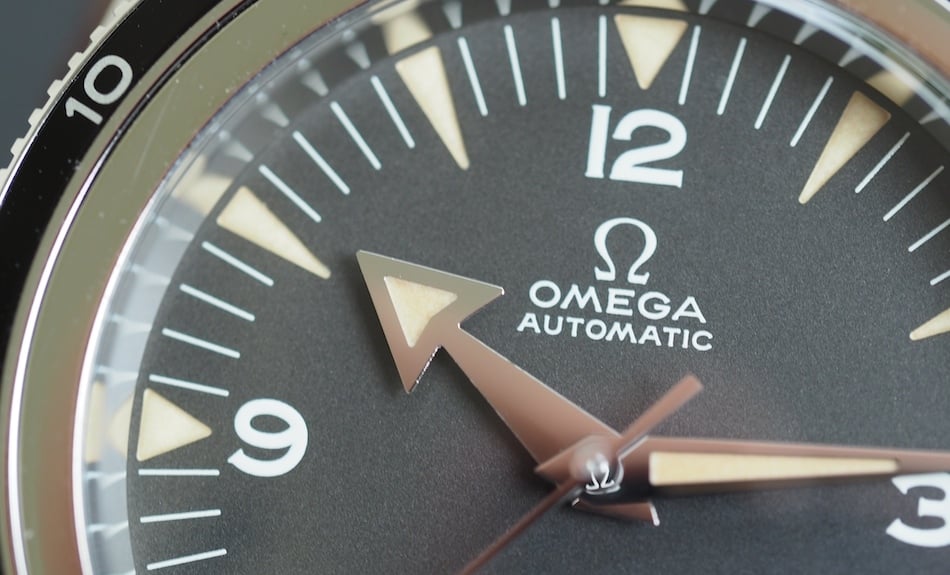 Credit the application of the lume and its slightly rough surface for looking so authentic. Like it or not, this watch is supposed to look old and it’s done very well. 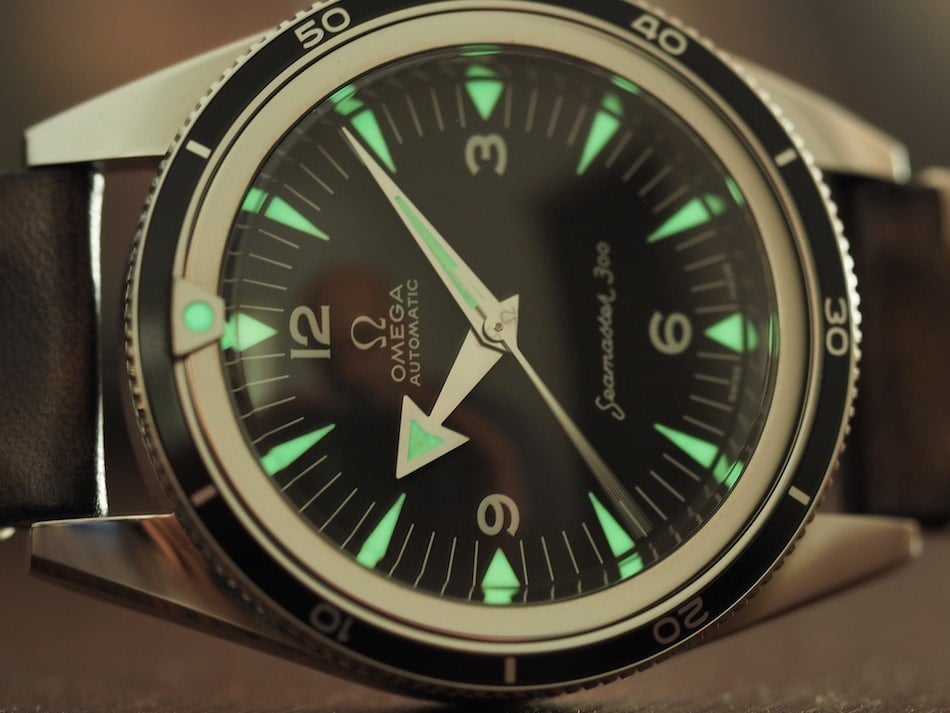 As you can see, it lights up well in dark too. 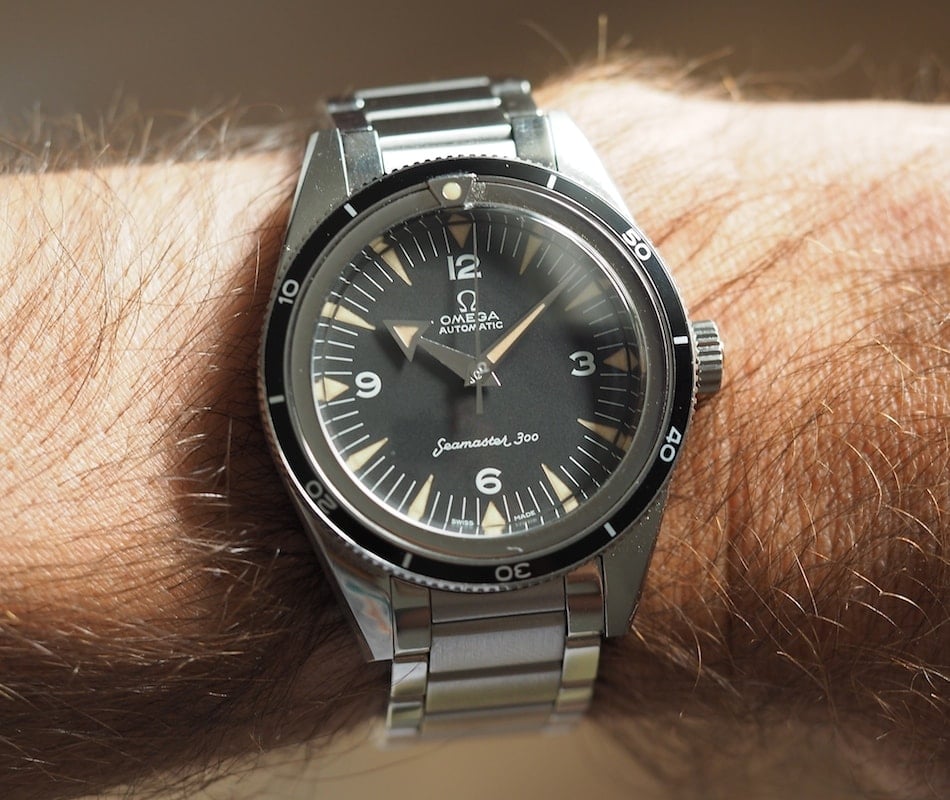 An Easy Watch to Wear

I mentioned that I really enjoyed wearing and having the Omega Seamaster 300 60th Anniversary. It felt amazing on the wrist and, despite coming in at 39mm in diameter, it reminded me of something very wearable such as an older Rolex Explorer. And due to the watch’s slim diving bezel, it even fits well under any style of shirtsleeve. It looked great with everything; it was the only watch I had with me on a weeklong business trip. Colleagues who like watches asked about it and I traded a knowing glance on the subway with a person who was wearing a 1960’s Seamaster 120. But not everything was perfect with the Seamaster. 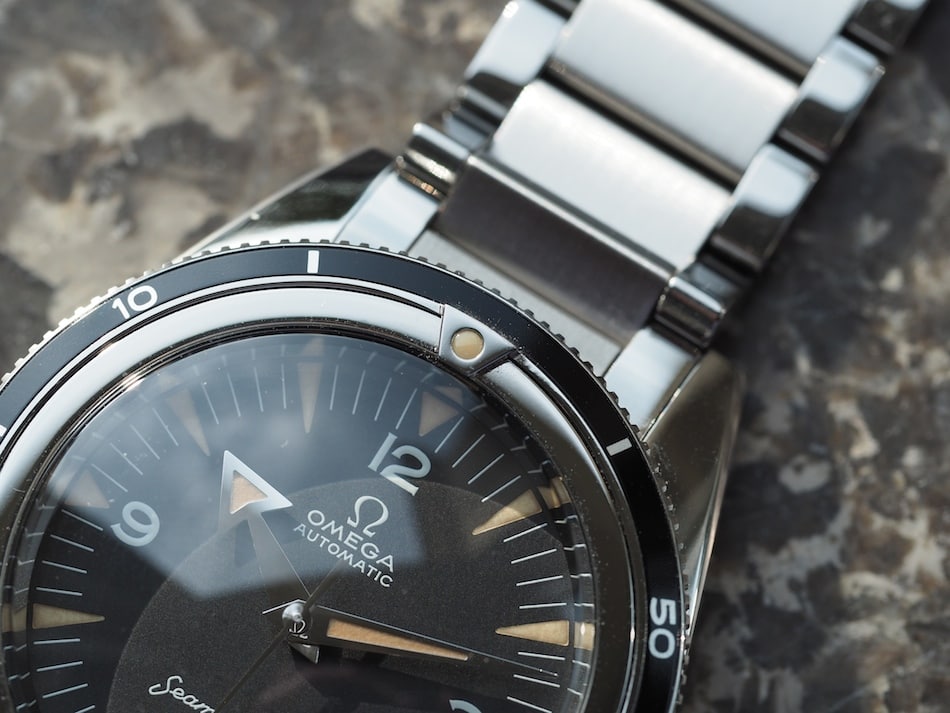 The bi-directional dive bezel on the Omega Seamaster 300 60th Anniversary carries an iconic look. Yes, the polished inner portion is a magnet for fingerprints, but that’s not what bothers me. It’s the fact that the bezel has some rather light action. I wouldn’t call it rickety, but it is a little less solid than I would have expected. A big deal? Not really, but it feels a little too easy to mistakenly move if bumped – something to avoid during a dive. And then there’s the bracelet… 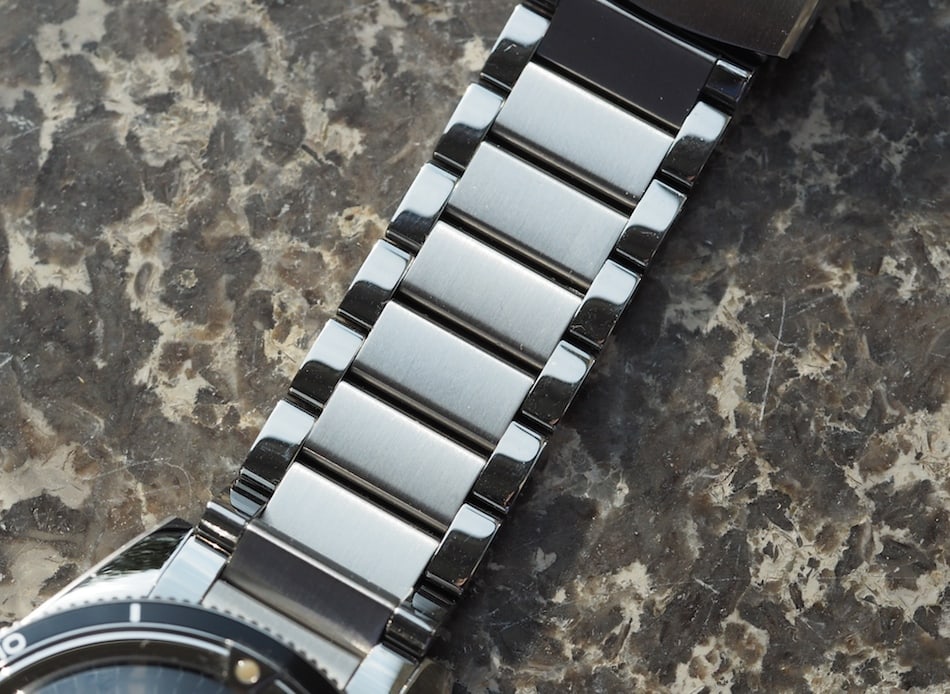 The Bracelet Was the Only Question Mark

Fans of watches have been awaiting the arrival of a modern rendition of Omega’s famed early bracelet with flat links. On the positive front, I think people will be pleased with the finish quality and the suppleness of the links. 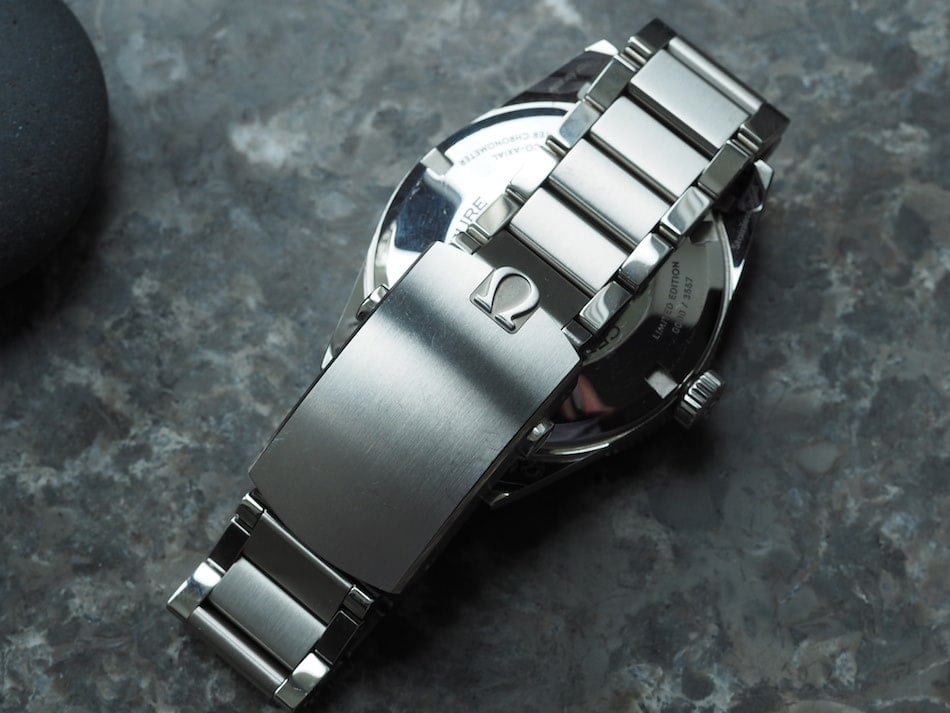 On the challenging side, the bracelet doesn’t taper at all like the original. It’s a strange move, but I suppose it does add rigidity and strength. Unfortunately, when viewed from certain angles, the bracelet doesn’t follow though with the same elegance of the case. Still it’s not my largest niggle. 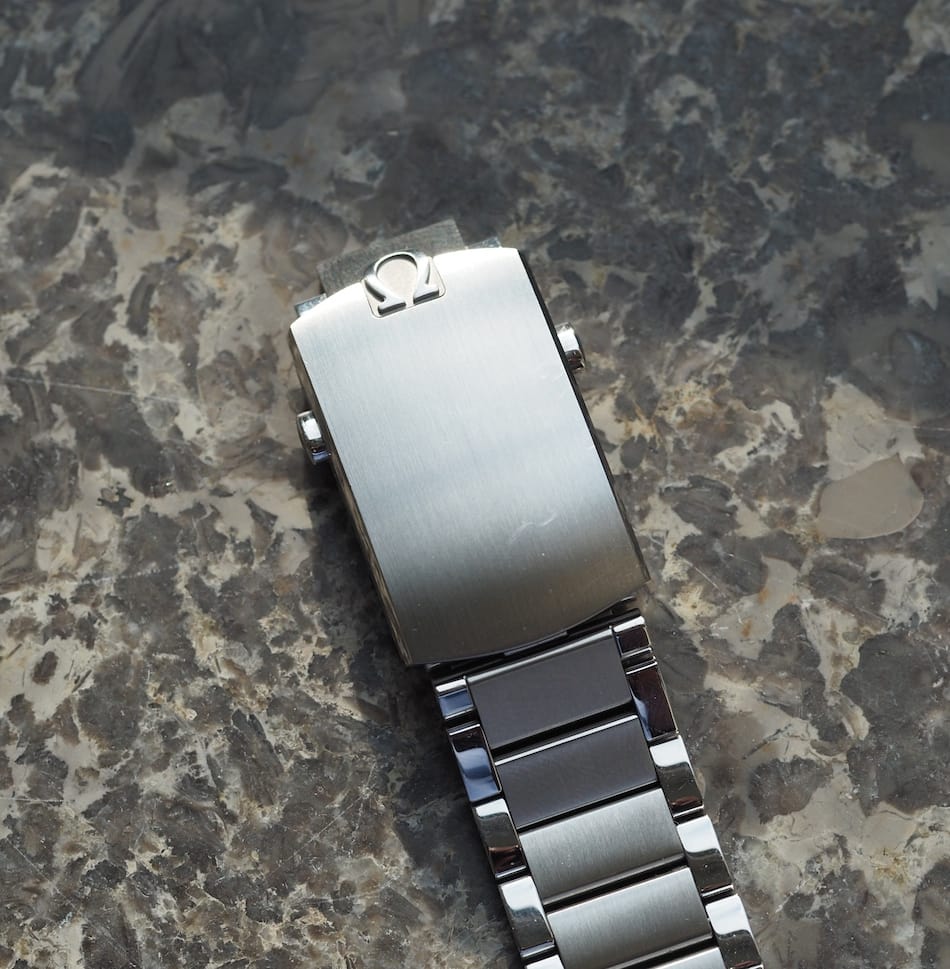 No, that would be the large and blocky bracelet clasp. Yes, the clasp contains a nice push-down microadjust feature, but the clasp just feels big and clumsy. It works, is nicely finished, but I long for something slimmer and, again, more elegant. 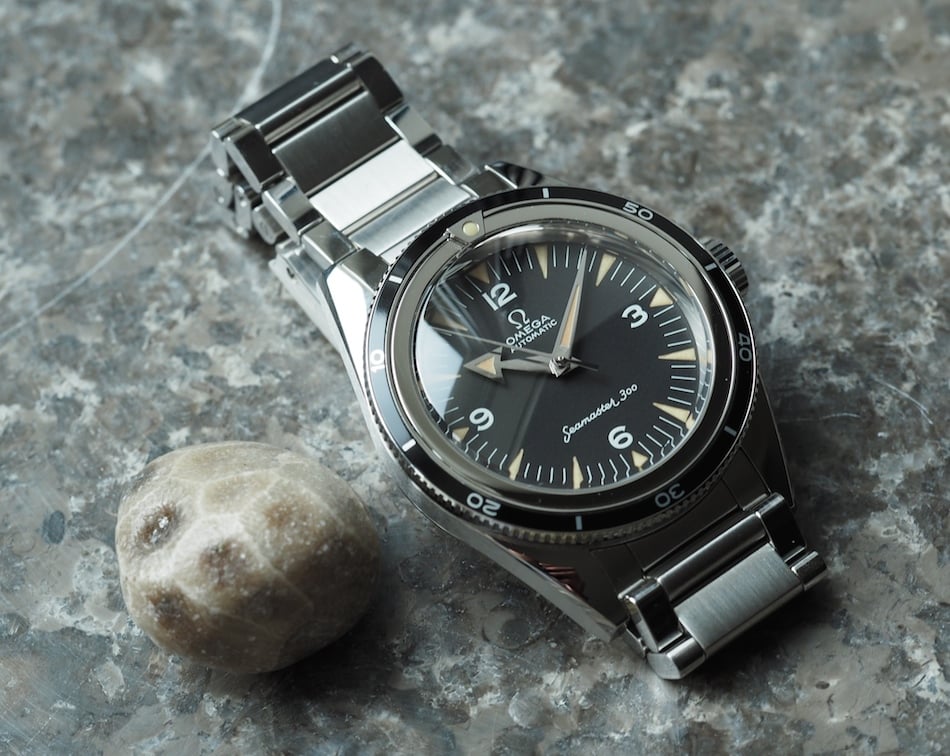 I like to shoot using natural light and I have to say that the Omega Seamaster 300 60th Anniversary is one of the more difficult watches I’ve ever had the pleasure of photographing. The highly polished case, the polished bezel and the crystal are all highly reflective and it made life difficult.  It did make me appreciate the fine finishing on the case, though. 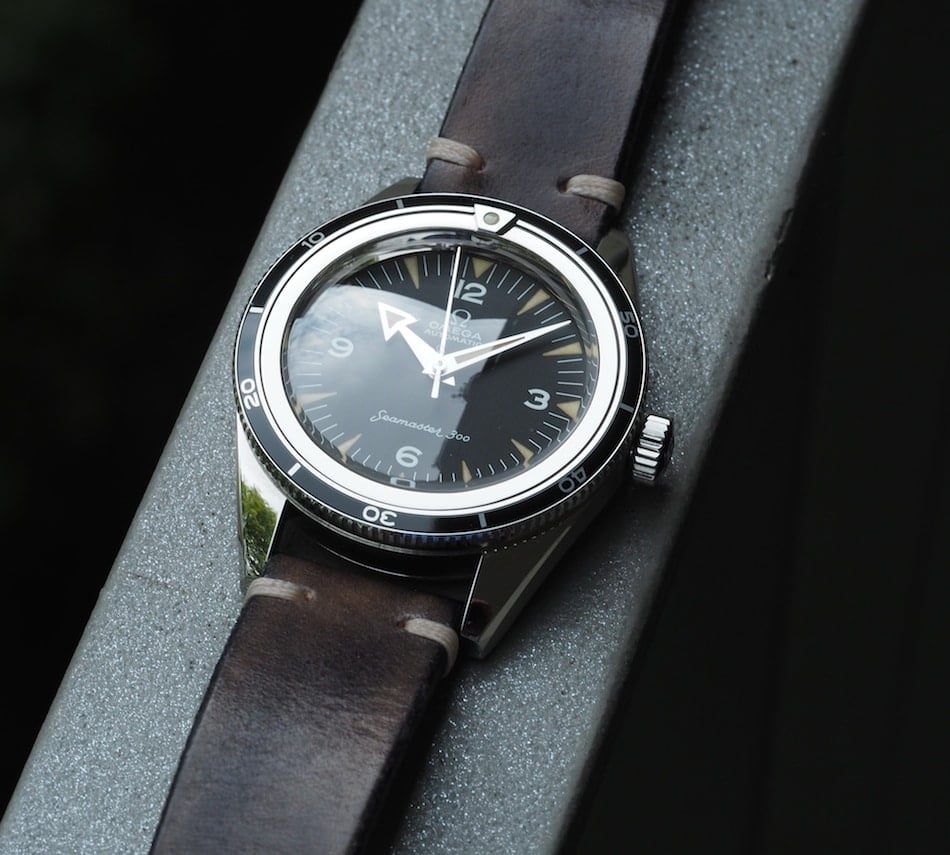 I’ve said to others that the trio of anniversary Omegas would make a great collection to the aspiring new collector. If you were a fan of the vintage look, the three would cover all the bases. On its own, the Omega Seamaster 300 60th Anniversary is a highly capable diver that could very easily serve as one’s only watch. Plus, if the bracelet does bother you, it fits nicely on a 19mm strap and gives the watch a totally different look. 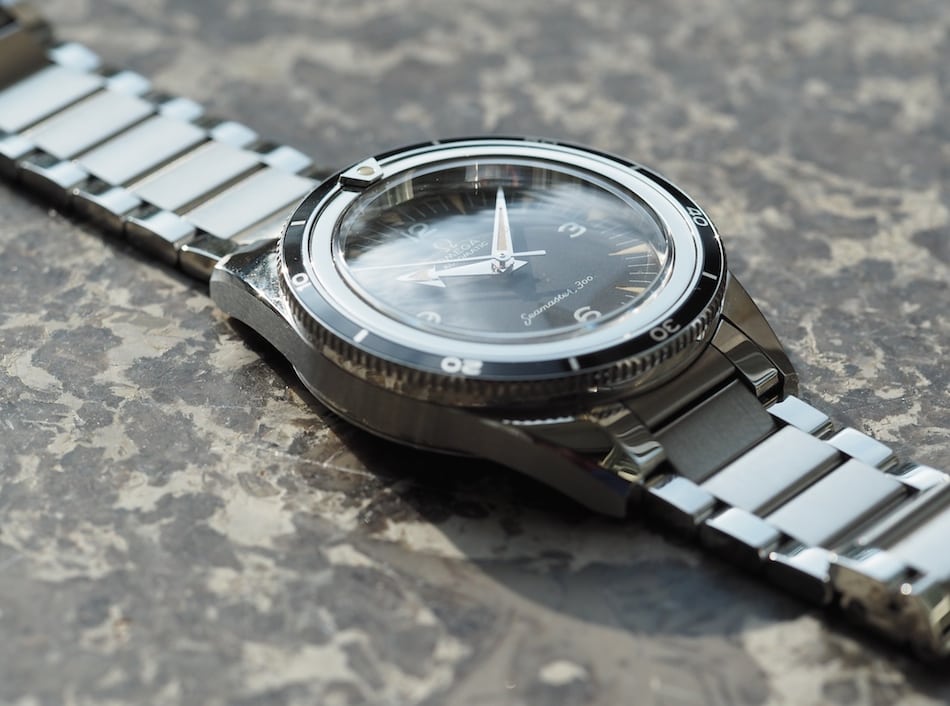 At 6400 Euros, the 3,557 piece limited edition Omega Seamaster 300 60th Anniversary presents an interesting proposition. Its legend certainly ranks lower than that of the Speedmaster, but it is a famous name in watch history. Price-wise, it comes in lower than, say, a Submariner but it comes in at 900 Euros more than the 41mm current say Seamaster 300. For me, the size was absolutely perfect, I know I’ll never find an original CK2913 (and couldn’t afford one anyhow), and I like the relative exclusivity. Omega produced a winner with this release and they should be out soon – I’d highly recommend keeping in touch with your local boutique in order to try one. 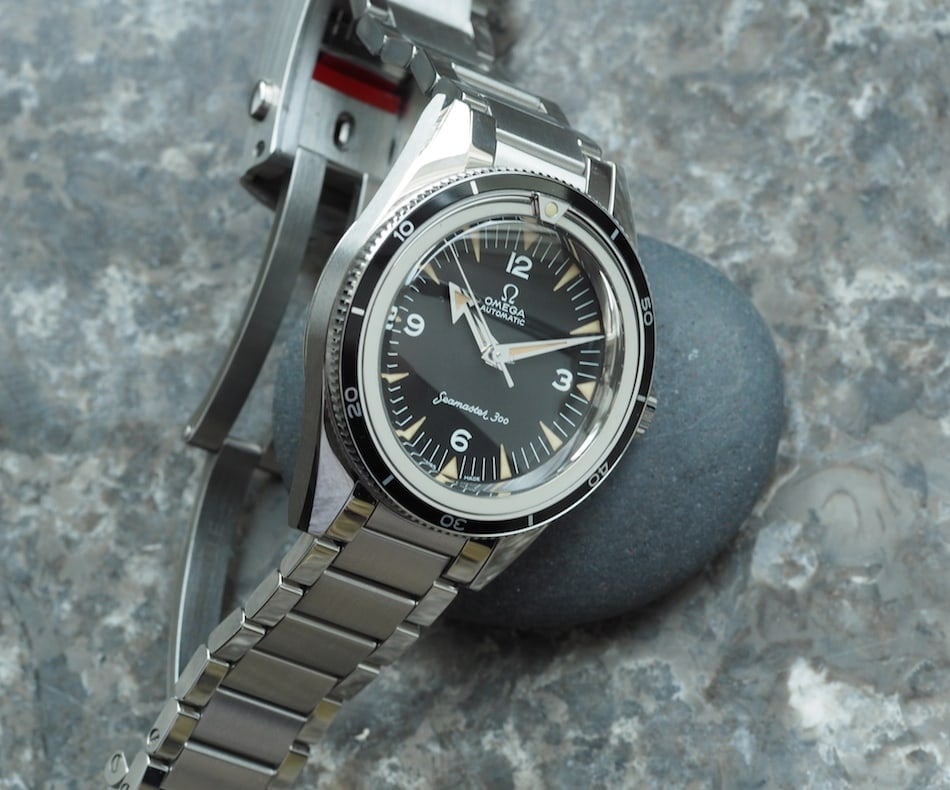 For more information, head to the official Omega site.

Hot Topics
Introducing: The New Seamaster Professional 300M 60 Years Of Bond — With A Special Animated Case Back
104 comments
Are You Still After An Omega × Swatch MoonSwatch?
79 comments
It’s Time To Invest In A Dress Watch — Our Picks From Breguet, Omega, Grand Seiko, And More
71 comments
Sunday Morning Showdown: The Tudor Pelagos Provocation — Pelagos Vs. Pelagos 39
55 comments
The Rolex Waitlist Conundrum — How Much Will The Price Of Your Watch Increase While You Wait?
48 comments
Popular
Certina DS PH200M – Hands-On Review
Balazs Ferenczi
23
Grand Seiko SBGA211 ‘Snowflake’ And Why I Didn’t Buy It
Robert-Jan Broer
22
The Omega Seamaster Diver 300M Returns – On The Wrist Of Daniel Craig
Paul Dezentjé
17