When I was spending my holidays in Italy last summer, I couldn’t resist doing some watch window-shopping in Verona. I came across a big retailer that carried a lot of brands, including Omega. I noticed that they had a number of Speedmaster Professional watches on display, so I went inside and asked about them. When the salesman carried in a couple of trays with Omega watches, there was also a tray with Seamaster Aqua Terra watches. One of the watches from that particular tray that caught my attention was the PGA Golf edition: a beautiful, sleek looking watch with green accents on the dial featuring Omega’s caliber 8500 movement. I thought that this might be a perfect watch for everyday wearing, as my collection tends to shift towards vintage pieces these days.

I didn’t pull the trigger, as the price was the same as in The Netherlands and my fear was that it was, more or less, an impulsive purchase. Frankly, I needed some time to think it over, as I had never before considered an Aqua Terra.

Back home, I looked around for the Aqua Terra PGA edition and realized that the model I had viewed in Italy was actually the previous model. There was a new model in town with the new Master Co-Axial movement (anti-magnetic) that also had a bracelet with a different finish.

I wasn’t too sure which one I liked better to be honest. Some elements of the former model were more to my liking, but the new piece had the Master Co-Axial movement upgrade and no frame on the date aperture (which I prefer).

The demand for a Seamaster Aqua Terra was put to the background when I did another – more or less – spontaneous purchase of a vintage gold Speedmaster Professional last October. My bank account at the time didn’t allow me to add a new Seamaster Aqua Terra on top of that. 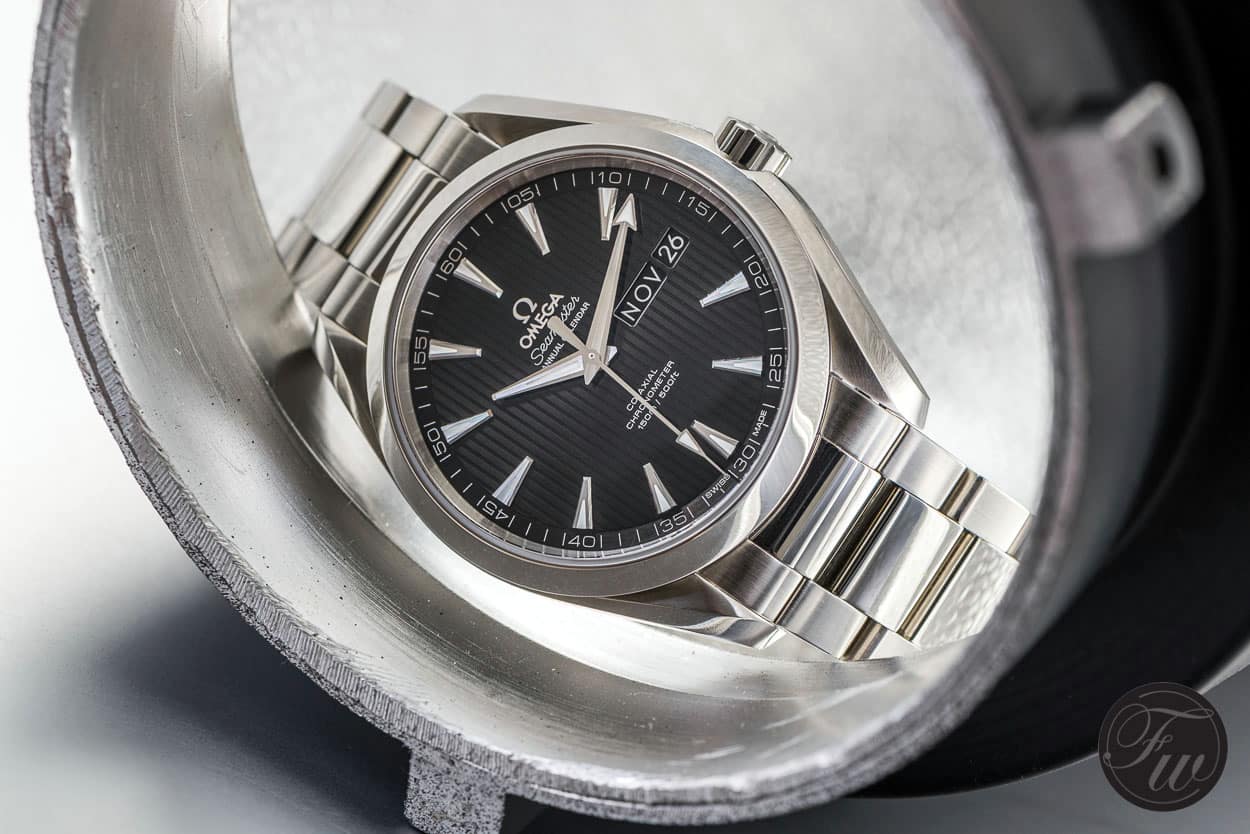 The official model name is even longer, but I will stick to this one. According to Omega, the Seamaster Aqua Terra pays tribute to their rich maritime heritage. Interpreting this marketing direction from Omega is difficult for me. While the Seamaster is water resistant, this particular Aqua Terra collection, with its lyre lugs, reminds me more of the Speedmaster, Railmaster and Seamaster 300 models that were introduced in 1957.

Upon closer inspection, I have to admit that the dial of the Seamaster Aqua Terra Annual Calendar resembles the teak deck of sailboats, which perhaps does link it to the maritime theme. A beautiful dial, in my opinion, as it gives the watch a bit of depth. 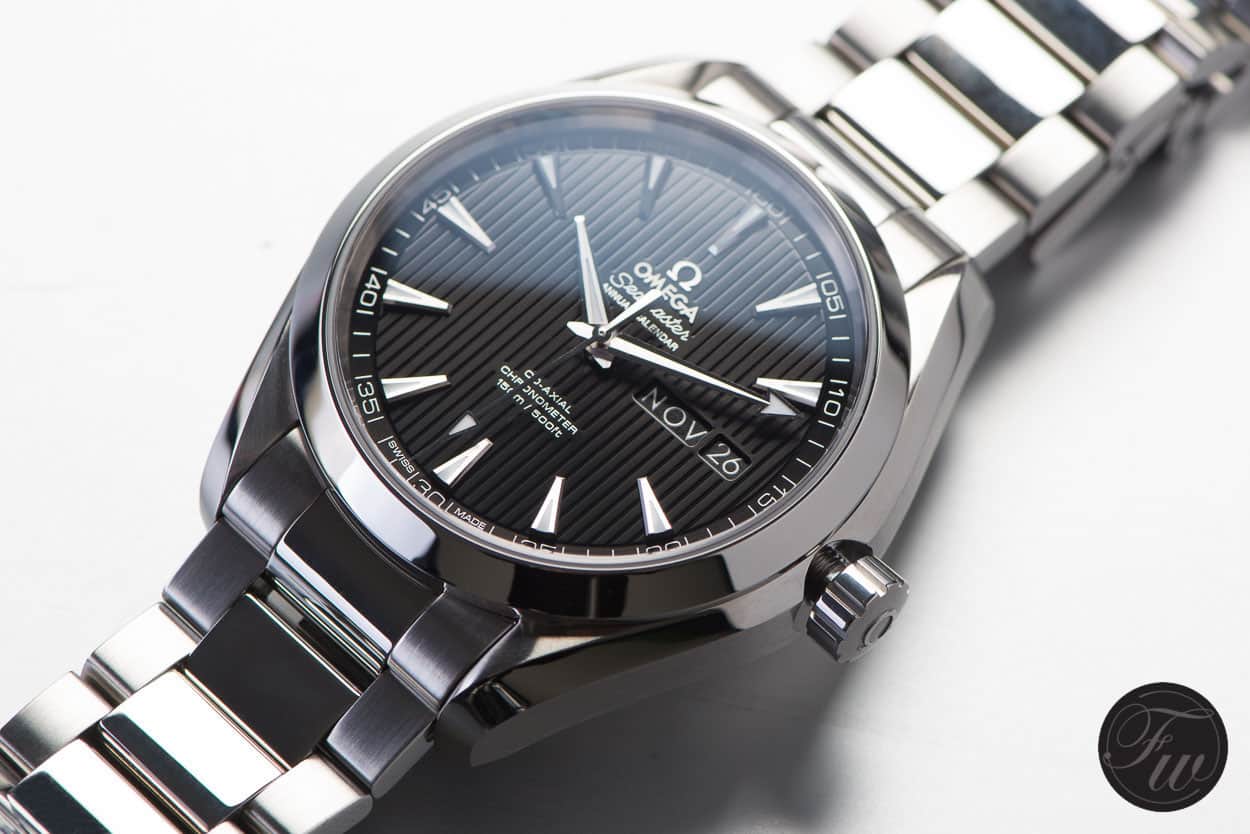 On the outer ring of the dial you will find the minute markers. This part doesn’t have the teak-deck pattern and therefore creates another level of depth. The polished hour markers are applied to the dial and are filled with Super Luminova. Although the hands are not 100% the same as the Broad Arrow hands that Omega used in the past, there is a strong resemblance due to the big arrow on the minute hand and second hand.

The day and date aperture at 3 o’clock is nicely integrated with the dial by using discs in the same color. The printing on the discs is in white and gives it great contrast.

Turning the watch around, you will immediately notice the beautifully finished Omega movement. You are looking at the Omega caliber 8601, a Co-Axial movement with an annual calendar feature. This means it will do the correct jump from the last day of the month to the first day of the month, except on the 1st of March. This is a useful complication that only requires adjustment on the last day of February (or the first day of March).  The Aqua-Terra may not be a perpetual calendar, which requires no adjustment, but these movements are far more expensive than annual calendar watches. 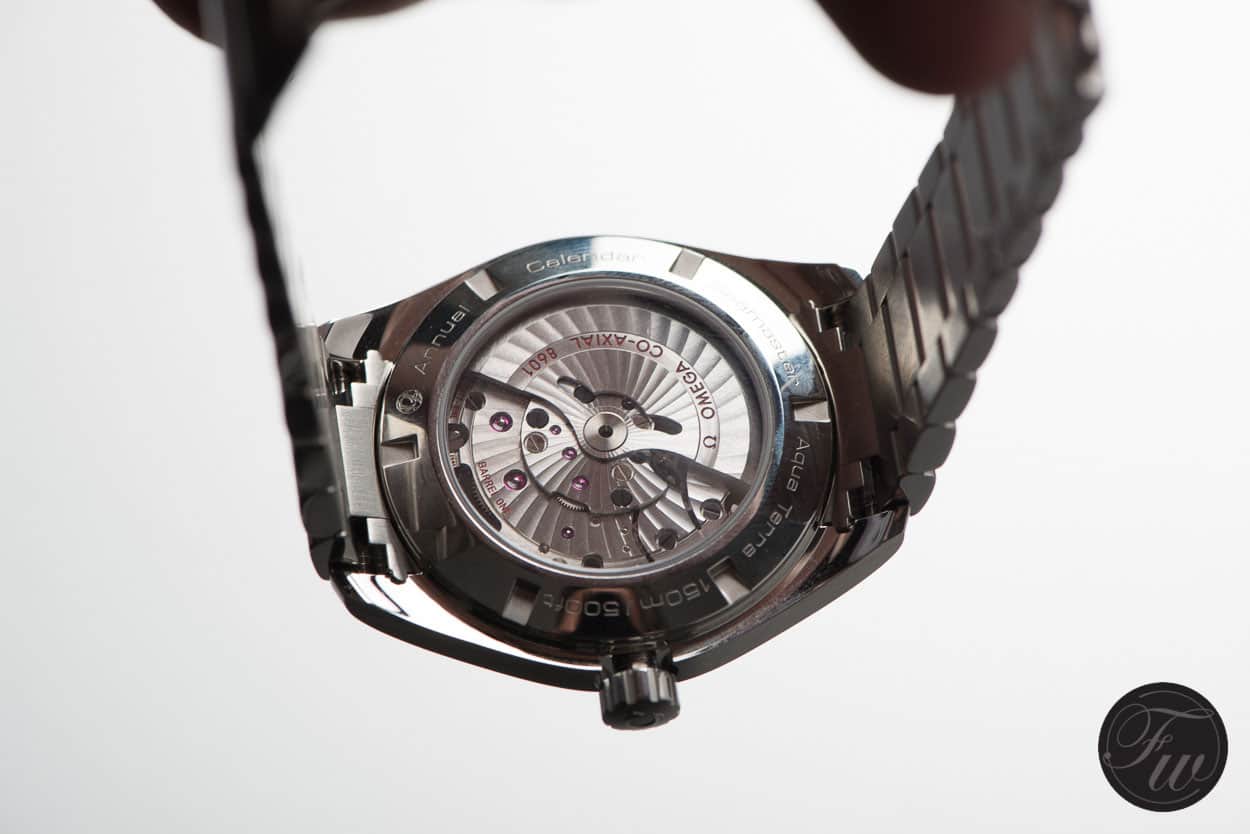 The Omega co-axial caliber 8601 movement was developed in-house and is based on the caliber 8500 movement. It isn’t a Master Co-Axial movement like the one in the PGA edition I tried on earlier, but I assume it soon will be as Omega is gradually making sure all Omega calibers are Master Co-Axial. I expect that the “Chronometer” indication will also make room for “Official Certified” as per their METAS certification (read all about METAS here). I do not know whether this means that there will also be a new caliber indication in the future.

There is a power reserve of 55 hours for this movement that uses two barrels in series. The movement has a beautiful Geneva wave finish in arabesque. The Omega caliber 8601 (and 85xx and 93xx series in general) is a pleasant movement for the eyes in any case.

Omega’s bracelet for the Seamaster Aqua Terra feels solid, has a folding clasp with pusher mechanism to release and has screwed links. The center link has been polished, in the same style as those old flat and flexible reference 103x bracelets that Omega used in the 1950s and 1960s. Although not everyone is fond of the polished center link – and I have to admit I had to get used to it as well – it does add some nice ‘play’ to the watch. It isn’t a tool watch by any means, despite the maritime heritage according to Omega, but the watch is perfect for formal occasions (you can also put a nice alligator strap on it if this suits you better) and for casual wear. 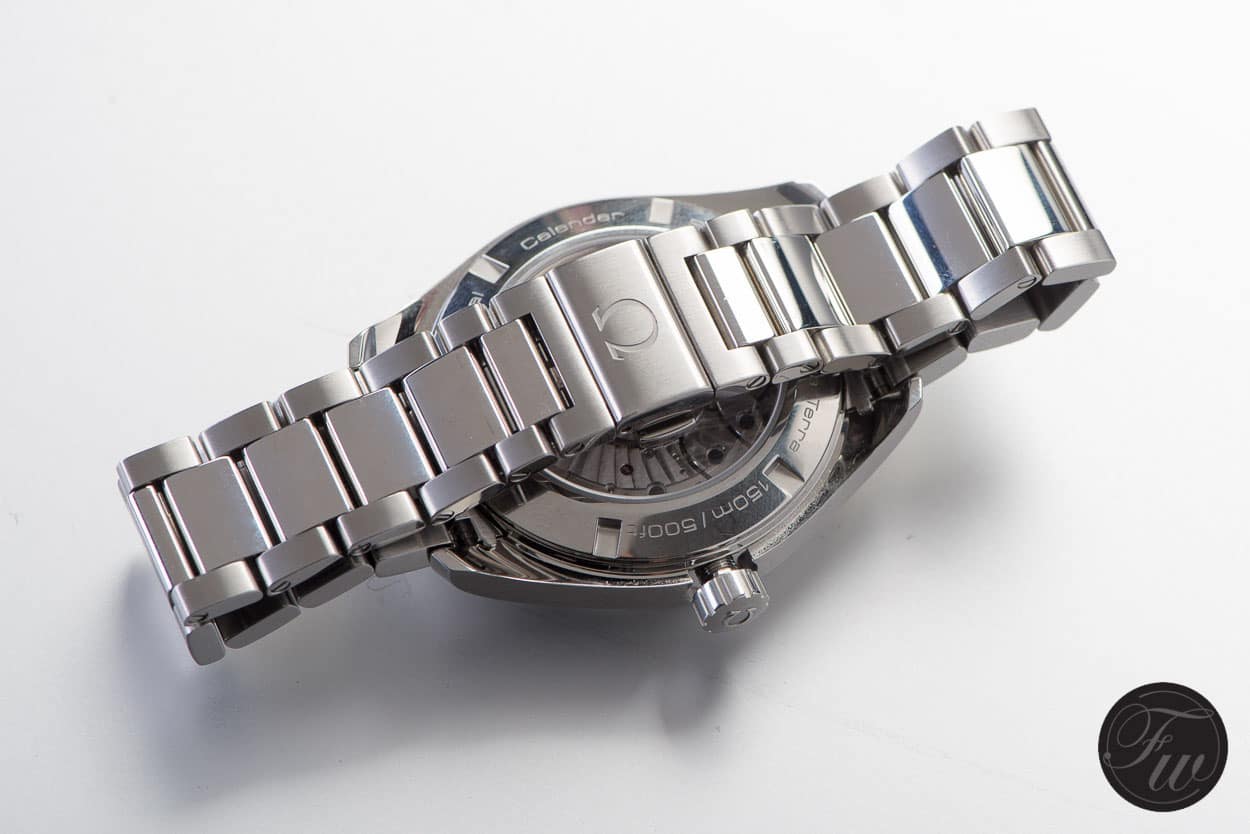 In actuality, the 43mm case, with its lyre lugs and smooth slim bezel, felt quite good on the wrist. I expected that it would wear so much bigger than the 41.5mm Seamaster Aqua Terra I had tried on or the 42mm Omega Speedmaster Professional watches that I often wear. While it wore comfortably, it is by no means a small watch, so make sure to try it on before you buy.

After a few weeks of wearing, I love the look of the Omega Seamaster Aqua Terra. I can definitely say that this model is high on my wish list for a modern watch. It is a modern watch with modern features like proper water resistance, solid stainless steel bracelet, sapphire crystal and so on. It’s a perfect watch that I can put on when having a 3 week holiday in Italy or France in the sun and keep it on my wrist during all activities (like swimming). The Omega Seamaster Aqua Terra is also – more or less – not so different from the vintage watches I like to wear so much in terms of aesthetics. Except for the size and the sapphire crystal, the shape of the case and look of the dial has quite a resemblance with Omega watches from the past. 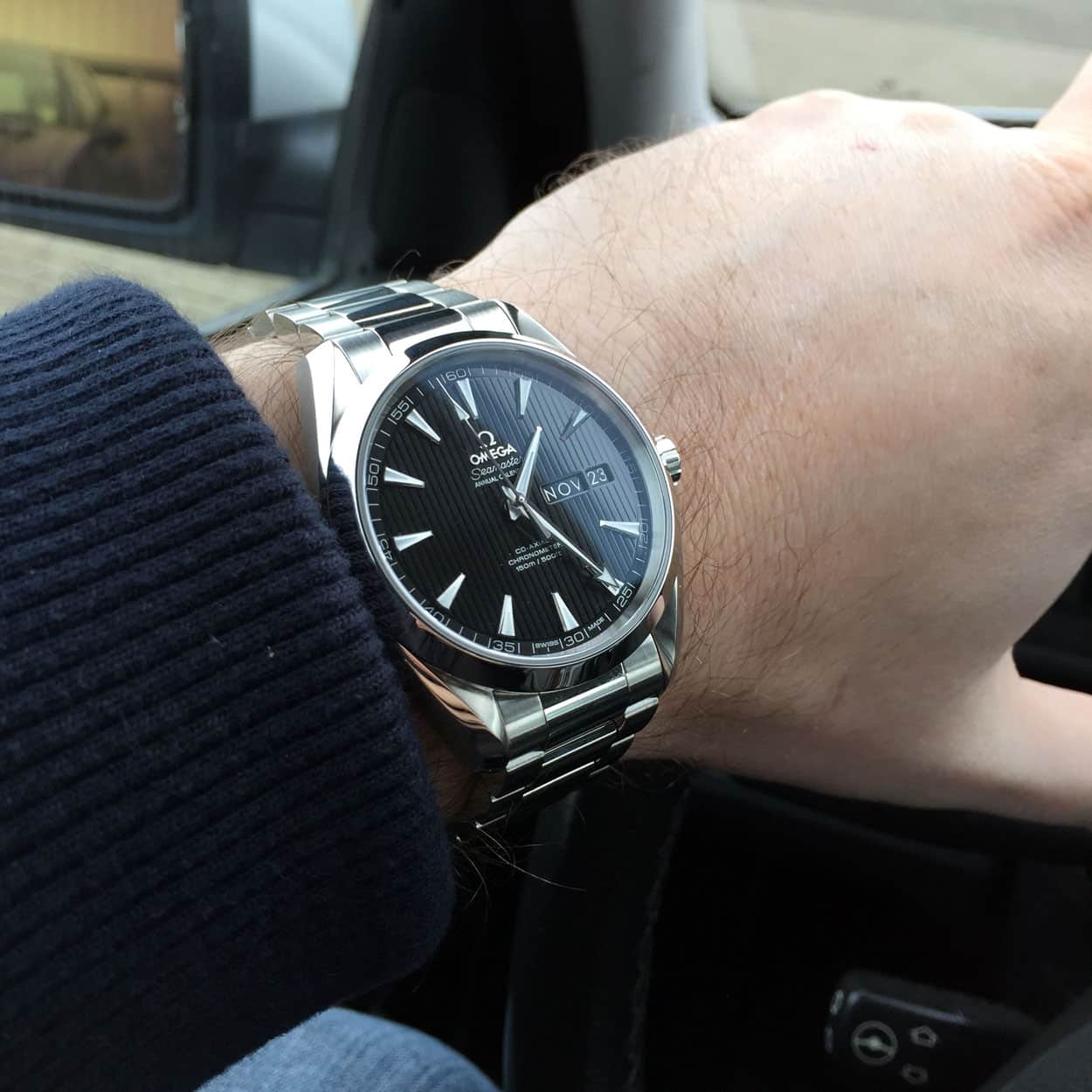 Due to the caliber 8601 movement in this watch, which uses a silicon balance-spring and the Co-Axial escapement, the watch comes with a 4 year (international) warranty (instead of the normal 2 year warranty).

Hot Topics
Introducing: The New Seamaster Professional 300M 60 Years Of Bond — With A Special Animated Case Back
104 comments
Are You Still After An Omega × Swatch MoonSwatch?
81 comments
It’s Time To Invest In A Dress Watch — Our Picks From Breguet, Omega, Grand Seiko, And More
72 comments
The Rolex Waitlist Conundrum — How Much Will The Price Of Your Watch Increase While You Wait?
48 comments
The Best Omega Speedmaster Watches Of 2022
40 comments
Popular
Rolex GMT-Master History And Overview Of All Major References
Robert-Jan Broer
18
Rolex Submariner Hulk versus Seiko SLA019 : Shades of Green
Michael Stockton
27
Speedy Tuesday – Omega Speedmaster Professional 145.022 Buyer’s Guide Part 1
Robert-Jan Broer
14