Boring goes a long way. As a kid, I wanted nothing more than to eat pancakes every day. One day, my mom couldn’t handle my nagging any longer and made me pancakes in the morning. And in the afternoon and the evening too. Guess what? The next day, the kitchen smelled like pancakes again. And I was done. I wanted toast. What do pancakes have in common with the best boring but brilliant watches in the world? Well, a watch with an exuberantly, multicolored dial is a pancake. The Omega Seamaster Diver 300M Chronograph, with a black one, is the toast you can have any day and every day.

The good thing about fresh toast is that you can dress it up with sweet or savory stuff. And even just with a little bit of butter, it’s plain but undeniably good. Toast is not exotic or exclusive, and it’s hard to look at it as something extraordinary. But you know what, its capacities most definitely are.

Toast may be innately boring, but because of its versatility, you never really get tired of eating it. Enter the Omega Seamaster Diver 300M Co-Axial Chronometer Chronograph, the horological equivalent of toast. It’s definitely not the most exciting work of horology you ever lay your eyes on. But once you start wearing one, your initial reluctance to warm up to this watch, slowly, but surely, dies down. And in the end, you will embrace this diver’s chronograph.

The only thing that could truly cause some controversy is its size. The Seamaster 300M Chronograph is a considerable watch. Measuring 44×17.2mm and with a 52.2mm lug-to-lug, it’s a watch that sits prominently on the wrist. The size makes sense because we’re dealing with a watch that has a water resistance of 300 meters. A diver’s watch has to have a sturdy case to cope with the challenges that come with the job. However, its size makes the Seamaster Chronograph anything but inconspicuous. The black rubber strap (210.32.44.51.01.001) or the bracelet (210.30.44.51.01.001) it comes on, can definitely not be held accountable for attracting attention. But the more and more you wear, and the more and more you think about this watch, the more and more you start to appreciate it.

Subtleties on the dial

One of the secrets of the Seamaster Diver 300M Chronograph’s attractiveness is right in front of you. Spoiler alert: it’s the dial. Yes, it’s black, but it’s so much more than just black. The laser-engraved waves create just the right amount of texture and depth to keep things interesting. The design with two horizontal sub-dials and a date window at 6 o’clock makes for a balanced composition. It lends the watch a serene and distinguished presence.

A nice touch is that the open-worked sword hands stem from the original 1993 Seamaster 300M models.

The presence of a ceramic unidirectional rotating bezel and broad indexes filled with Super-Luminova are reminders that this watch is first and foremost a diver. A nice touch is that the skeleton sword hands stem from the original 1993 Seamaster 300M models. And in case you need some more pointers to the origins, please have a look at the helium valve at 10 o’clock. 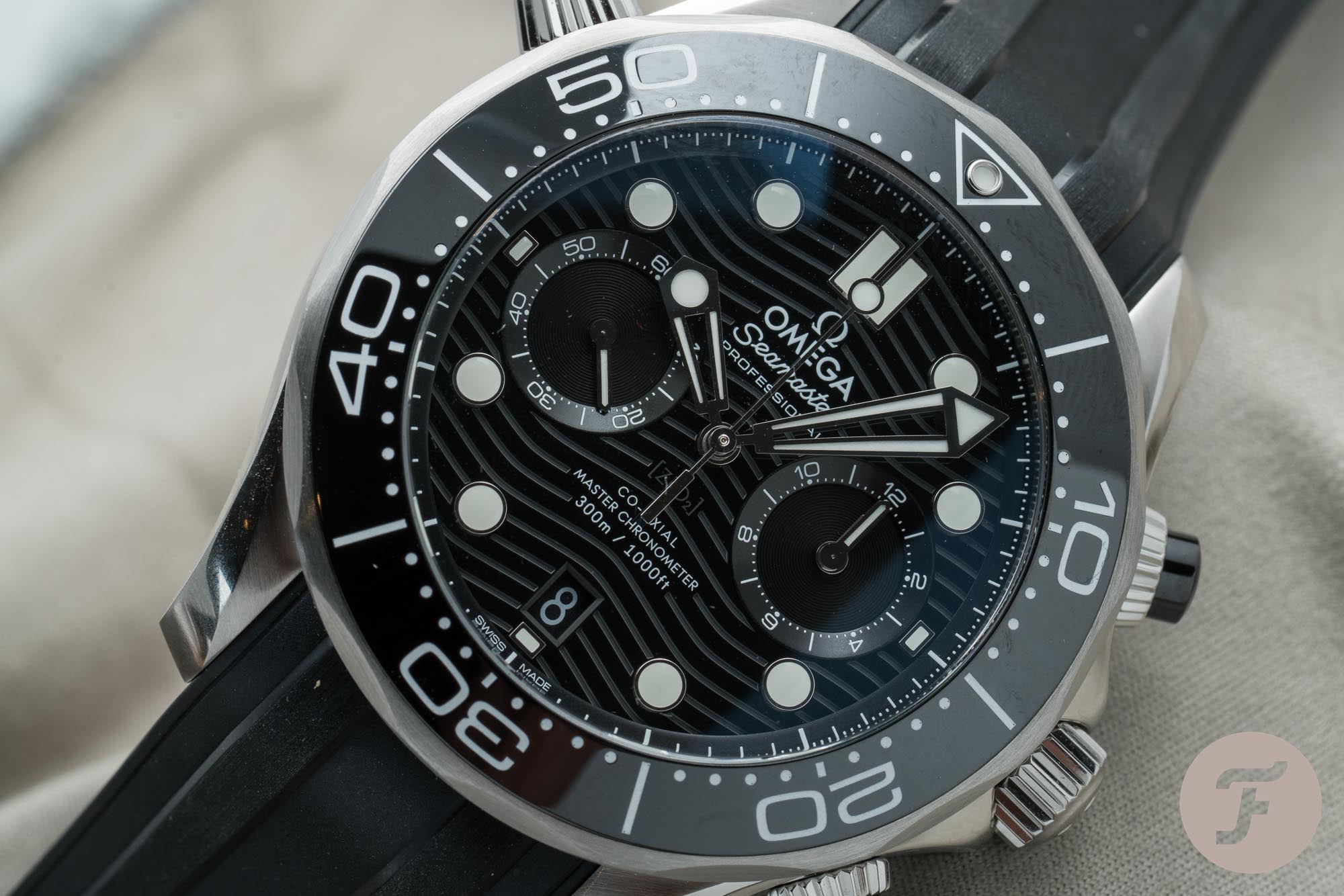 Turn it around for excitement

The name is ridiculously long. No one will ever use it in a full sentence. “Hey, have you noticed I’m wearing my new Omega Seamaster Diver 300M Co-Axial Chronometer Chronograph?” Well, of course people have noticed, it’s a big watch! But that’s not the point I’m trying to make. The name may be almost endless, it does hold some vital information about its quality. And it’s Omega’s caliber 9900 beating within that is responsible. The 9900 is an automatic, 54-jewel movement outfitted with a silicon balance spring, Co-Axial escapement, and a column-wheel mechanism — that’s covering the “Chronograph” part in the name. The “Chronometer” in the name stands for the fact that this watch is a METAS-certified Master Chronometer and resistant to magnetic fields up to 15,000 Gauss. Stuff that truly counts.

A cocktail vs. a shot of tequila

Apart from the performance, the 9900 is also quite the looker. The movement shows rhodium plating with Geneva wave decoration in arabesque. That’s also one of the aspects that make the Seamaster Diver 300M Chronograph such a timeless watch, the subtle decorations. I’m not just talking about the movement decoration, but also about the waves on the dial. Looking at them gives you a soft sense of fulfillment. You’re not blown away by it, but because it takes a little effort to notice it, the visual extra’s sink in better. And last longer. It’s like sipping a well-made cocktail, and the complete opposite of slamming down a tequila shot like a kick to the head.

What do you expect?

That’s also why I like the black Seamaster Diver 300M Chronograph much better than some of the more colorful executions. Sure, the colorful chronograph in the America’s Cup livery looks very much alive. Yes, the version in Tantalum, titanium, and Sedna Gold is hugely impressive. And the blue and gray version (210.30.44.51.06.001) has a very attractive nautical appearance. But could and would I wear these two on a daily basis? Nah, that would get old quick, just like the pancakes. And that’s the cool thing about the sober black version.

Instead of living off your watch for excitement, you charge the watch with your excitement; your trips, experiences, and adventures. You don’t expect entertainment from a black chronograph, but what you get in return is a timeless companion that never gets old. And I mean that quite literally. Because its quality and finishing are of the highest level, the watch can take a beating, and when something is wrong, it comes with a 5-year warranty to keep you covered.

The origins of the Seamaster Diver 300M Chronograph go back as early as 1993. This was the year Omega introduced their newest addition to the family, the Seamaster Professionals. James Bond wore it and got us excited. And now, almost 30 years and some updates later, the fundamental design still holds its own. It’s a modern classic and maybe a future legend. Thanks to the fact that the Seamaster Diver 300M Chronograph is durable, functional, recognizable, sporty, and the right amount of boring. It goes to show that boring goes a mighty long way and is mighty exciting if you develop a sense for that.

For the record, I eat toast almost every day and like it. But I also still enjoy the occasional pancake very much. With apple and cinnamon for instance and melting butter on top and powdered sugar. But it’s not an everyday thing. I know now that some watches are like pancakes, and some are like toast, and I couldn’t imagine a world without either of those things. There is so much to discover in the wonderful world of watches.

If you want to check out Omega’s collection of Seamaster Diver 300M watches, please visit the official website.

Hot Topics
Introducing: The Omega Speedmaster Super Racing With Spirate System
162 comments
Design Vs. Specs — Which Is More Important To You When Buying A Watch?
86 comments
The Time To Buy Is Now: How The Current Economic Climate Influences Watch Buying And How You Should React
51 comments
My Predictions For New Omega Speedmasters In 2023
48 comments
A Regret-Free Guide To Buying Your First Luxury Watch — Part Three: Higher-End Options From Omega, Rolex, Grand Seiko, And More
48 comments
Popular
Speedy Tuesday – The Original Omega Speedmaster Ultraman
Robert-Jan Broer
7
You Asked Us: Rolex or Tudor
Gerard Nijenbrinks
9
Why You Can’t Go Wrong With The Rolex Datejust
Robert-Jan Broer
5