The renewed edition of  Omega’s iconic diver’s watch received a lot of positive critics and has become one of our favourites as well. A little over twelve months later Omega has not been a part of Baselworld in 2019, and the focus has shifted to the Speedmaster. That doesn’t mean that there are no Seamaster novelties to discuss for 2019. At the Swatch Group’s Time to Move event, Omega introduced three new Seamaster novelties. First, there is the all-new Omega Seamaster Diver 300M Chronograph, second a 43.5mm black ceramic and titanium version of the Seamaster 300M and third the brand also introduced a new colourway for the Omega Seamaster Diver 300M with a white ceramic dial. Let’s take a first look at this new colourway that might become a hit for Omega. 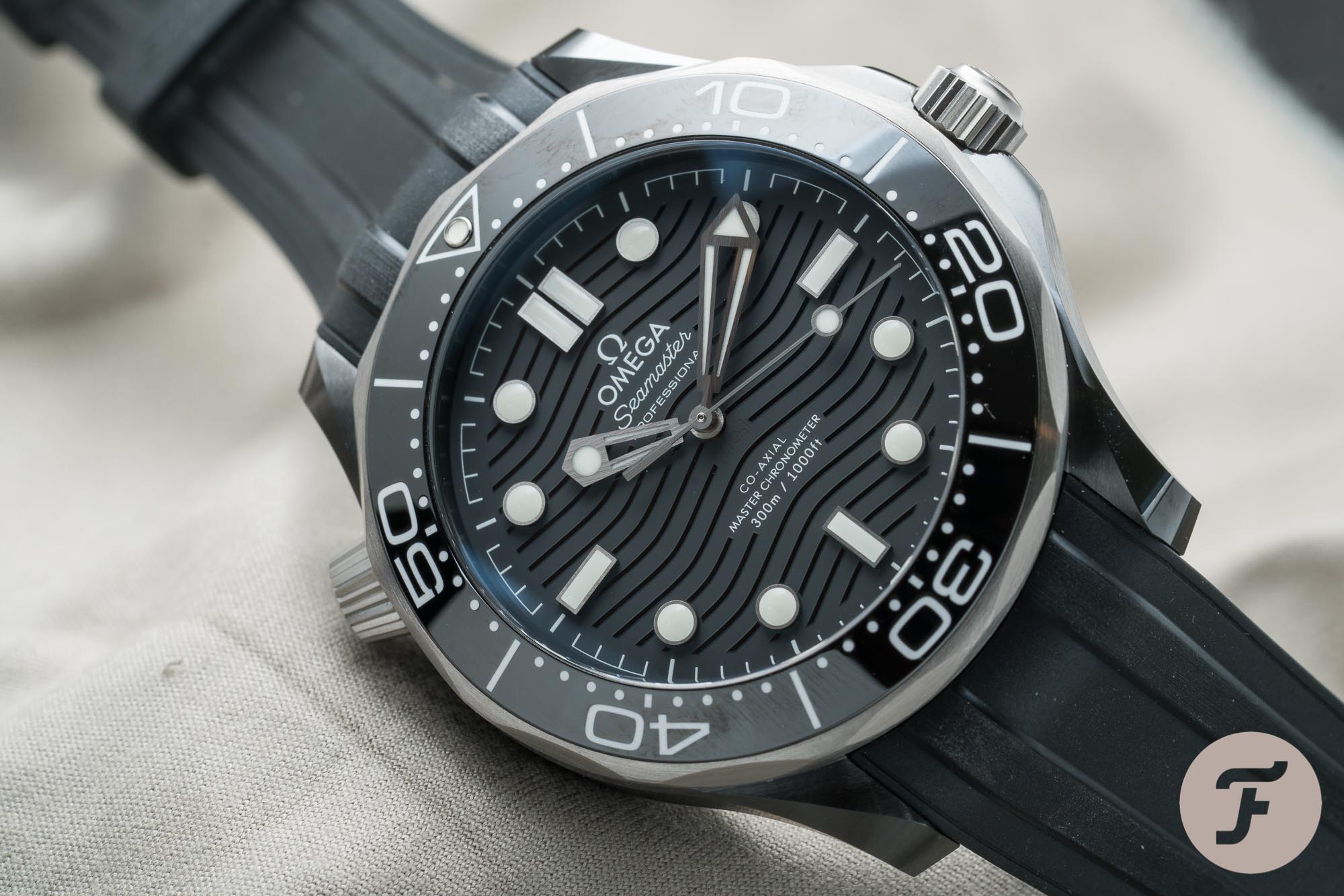 The first Seamaster 300M with a white dial was part of the first collection of the iconic Seamaster that was introduced in 1993. Although the watch was mostly seen in the iconic blue colour configuration as it was made famous by Pierce Brosnan in his role as James Bond, the 41mm Seamaster with a white dial was available with the self-winding Omega caliber 1120 movement (2532.20.00) and the Omega caliber 1538 quartz movement (2542.20.00). 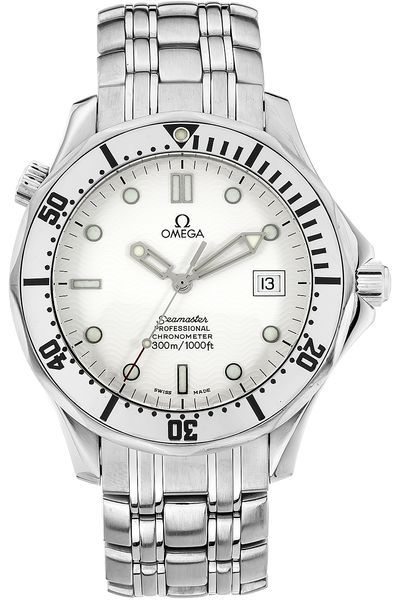 If you look for a pre-owned automatic version, you will find a couple but not many for around €2.000,-. And I understand why. The one thing that stands out most about this version is that it has not aged very well. In total honesty, the watch is rather unexciting as there is hardly any contrast to be found, especially on the dial. There is only a hint of colour with the orange end of the seconds hand, and for the rest, it’s a rather dull execution of the watch. The luminescent hour markers on the pre-owned version have changed colour over time, making the dial look a bit smudgy, and the silver hands hardly contrast with the white dial. Although it is a rare version of the watch, it certainly is not the version I would focus on when searching for a first-generation Seamaster 300M.

Another version of the Seamaster 300M with a white dial is the Seamaster Diver 300M GMT (2538.20.00) also known as The Great White. The other available colourway of the watch was a version with a black dial that also features a two-tone black and aluminium coloured bezel insert (2534.50.00). I have to say I have always preferred the white version over the black version as it is easier on the eye and has enough stand-out details that make it a very lovely watch. The first thing that stands out is the wavy dial that gives the watch its character and can also be found on the current version of the Seamaster 300M. There are subtle hints of colour with the red GMT hand and red GMT lettering on the dial. 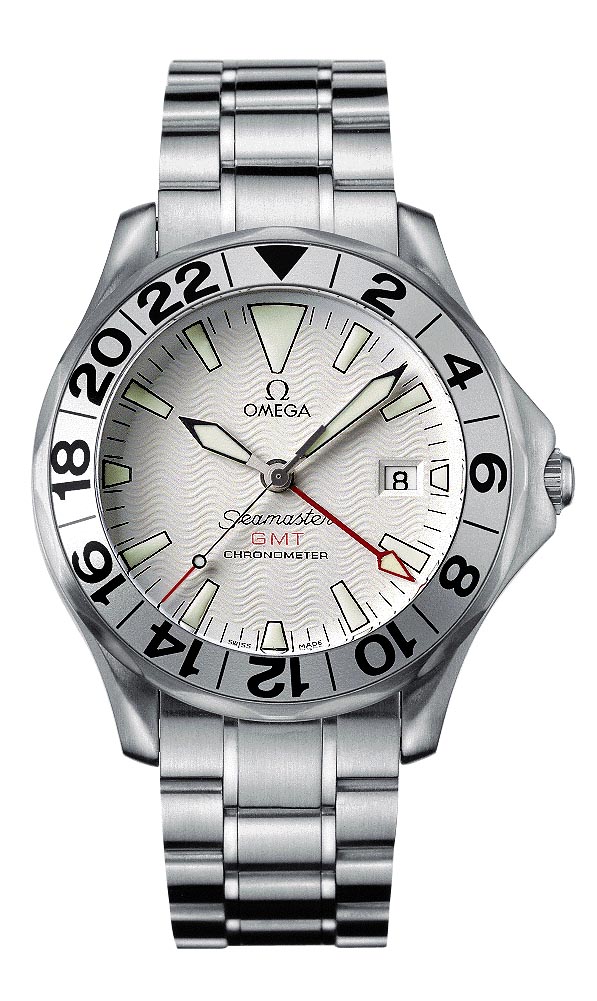 Further details that stand out are the oversized 24-hour numerals on the bezel insert, the black hands that create contrast with the white dial and the distinct shape of the hour markers. The watch is powered by the Omega Caliber 1128, which is an automatic movement with additional 24-hour hand based on the ETA 2892 movement. You can find a pre-owned version for around €2.500,- and overall this is still a very nice watch, and although this might not be many people’s first choice, it could still be a very nice daily wearer.

The third and last of the previous Seamaster 300M models with a white dial I want to touch upon is the limited edition Seamaster Diver 300M ‘Commander’s Watch’ (212.32.41.20.04.001) that was released in 2017. This tribute to James Bond’s naval rank and regalia stands out by the use of red white and blue that represent the ensign colours of the British Royal Navy. The watch comes with a 41mm stainless steel case, white ceramic dial and blue ceramic bezel with contrasting red rubber covering the first 15 minutes of the diving scale. The polished white ceramic dial is distinguished by the twelve blue indexes, the red and blue hands and the word ‘Seamaster’ written in red. The watch is powered by the automatic Omega caliber 2507 movement that has ‘007’ engraved on the rotor to give it a special touch. You can read more in detail about the watch in Robert-Jan’s article on the Seamaster Diver 300M ‘Commander’s Watch. 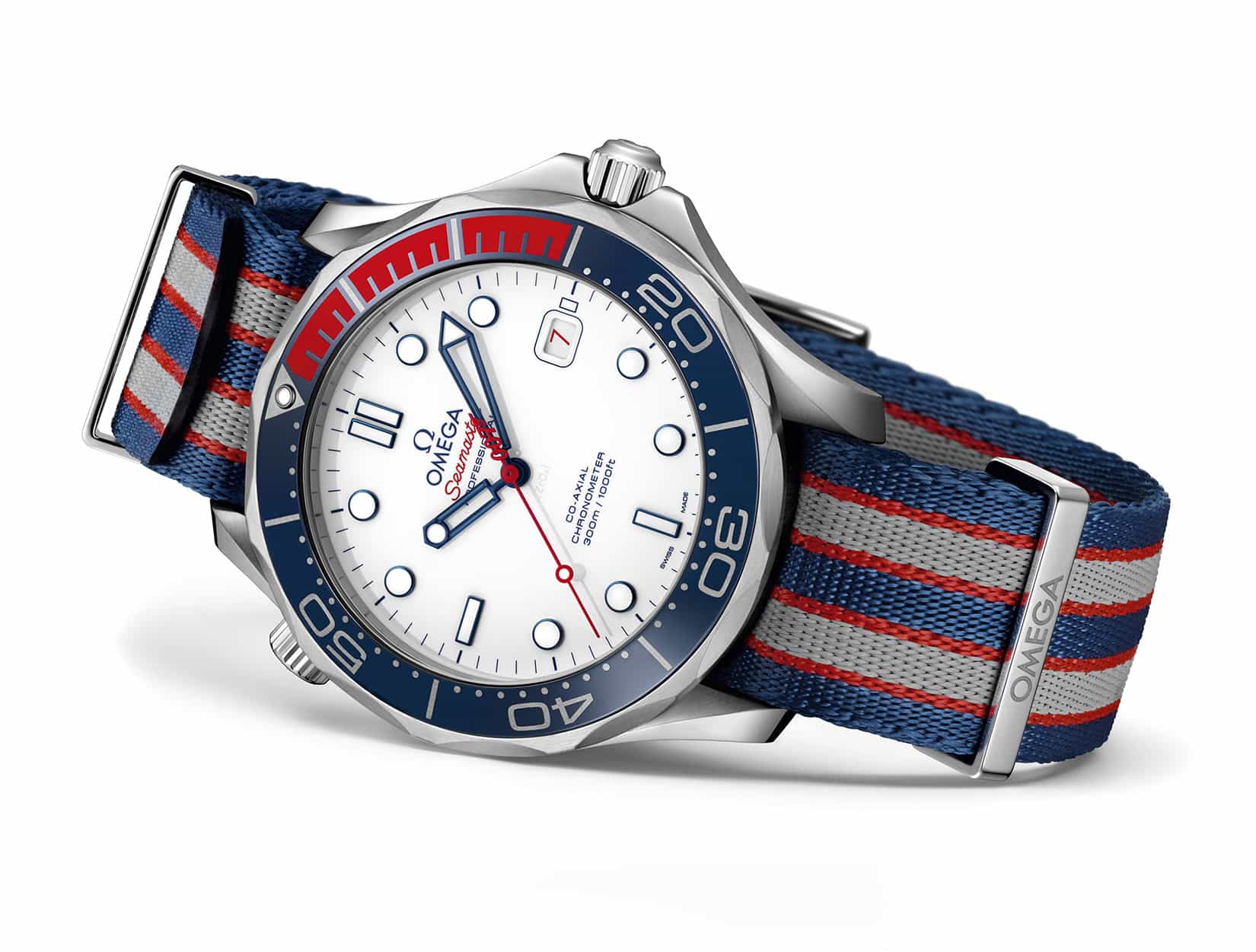 Although it’s a limited edition, there were 7007 pieces produced which is quite a large number for a limited edition watch. So it’s not that surprising you can get your hands on one easily for somewhere between €3.500,- and €4.500,-. But wait before you start looking for one. I wouldn’t go for the Commander’s Watch if you are looking for an Omega Seamaster 300M with a white dial. And it’s all because of the version Omega introduced recently.

The all-new Omega Seamaster Diver 300M with white dial is simply a beautiful watch. It’s in line with the new Seamaster Diver 300M models that were introduced last year. You get the same 42mm stainless steel case with the large helium escape valve at 10 o’clock and the new ceramic bezel with enamel-filled scale. The watch is powered by the Omega in-house produced Calibre 8800 Co-Axial Master Chronometer movement with date indication at 6 o’clock and a power reserve of 55 hours. So far, so good, but the exciting news starts with the colours and execution of the different elements. Because what Omega has done very well with this watch is creating a stunning contrast between black and white to optimise readability and create something beautiful for the eyes. 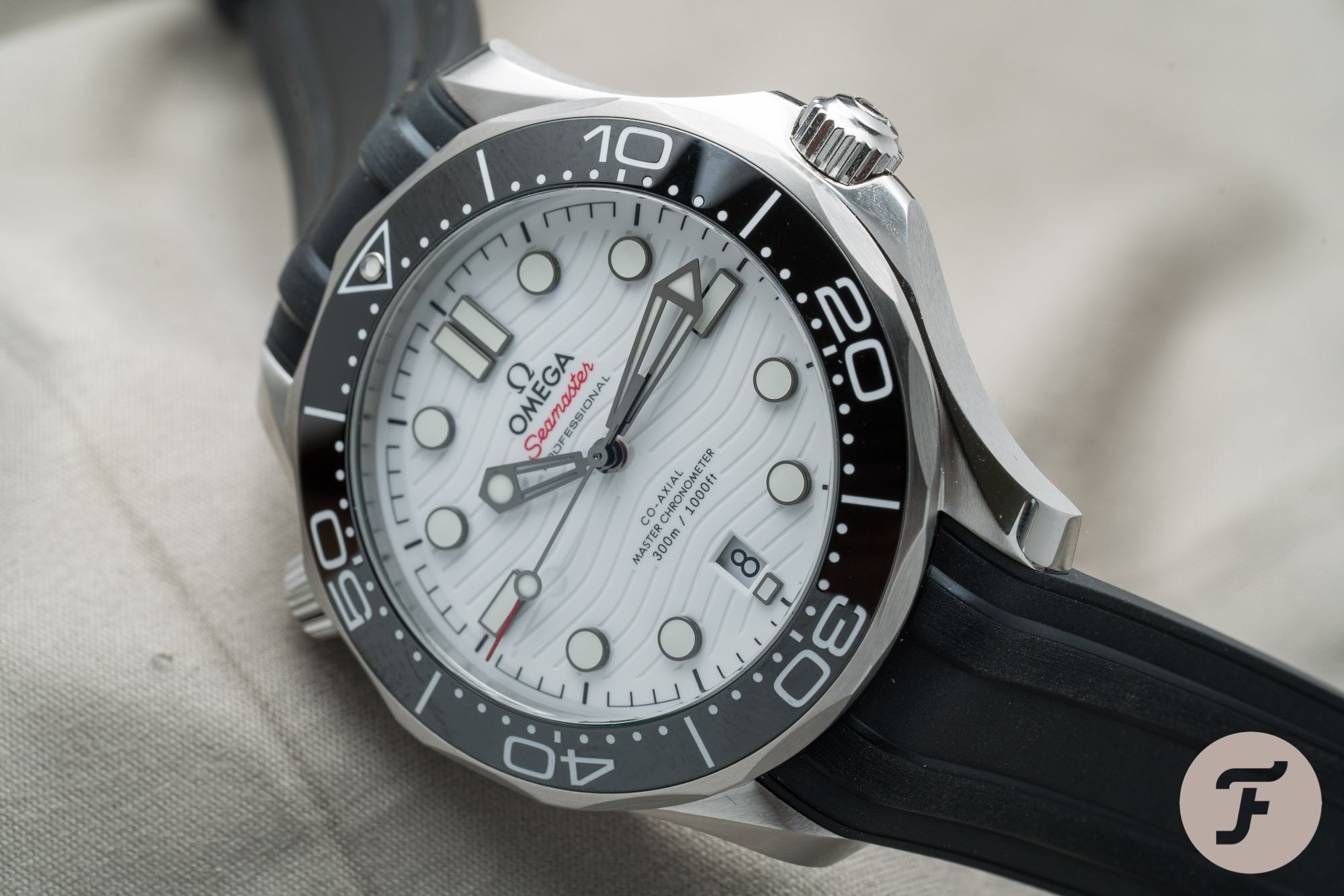 It starts with the white ceramic dial that has the same laser engraved wave pattern as all the other current Seamaster 300M models. The dial is perfectly contrasted by the blackened hour markers and blackened hour and minute hands. The seconds hand is also black but has a red varnished tip to create a subtle hint of colour once again. The mix of black and white elements make sure the readability is absolutely on point. The white dial is also contrasted by the black ceramic bezel with a white enamel diving scale, a combination that is also very easy to read. To finish things off, you can choose between a stainless steel bracelet or a black integrated rubber strap. The second option might be the winner here as it makes the watch look more stylish though being sporty. Besides, it creates an even bigger overall contrast between black and white. The version with rubber strap will cost €4.600,- and the version with the stainless steel bracelet will cost €4.900,- and both versions will be available starting November 2019.

Omega has made another smart move by introducing just one new colourway in 2019 to the existing Seamaster Diver 300M line-up. The high contrast black and white configuration creates a watch that has the potential to become very successful in the Seamaster 300M line-up. Whether it will be a big success remains to be seen as it is not the iconic colourway people might favour and the previous versions with a white dial have not always been big hits. Despite that, I think Omega has made a beautiful watch that further strengthens the iconic Seamaster Diver 300M collection.

For more details, head to the official Omega site.

Hot Topics
Introducing: The Omega Speedmaster Super Racing With Spirate System
162 comments
Design Vs. Specs — Which Is More Important To You When Buying A Watch?
86 comments
The Time To Buy Is Now: How The Current Economic Climate Influences Watch Buying And How You Should React
51 comments
My Predictions For New Omega Speedmasters In 2023
48 comments
A Regret-Free Guide To Buying Your First Luxury Watch — Part Three: Higher-End Options From Omega, Rolex, Grand Seiko, And More
48 comments
Popular
10 Tips For Better Watch Photography
Bert Buijsrogge
12
The Omega Seamaster Diver 300M Returns – On The Wrist Of Daniel Craig
Paul Dezentjé
17
Hands-On With the Seiko Prospex SRPC91K1 – Save The Ocean
Robert-Jan Broer
15