The Omega Seamaster Titanium Tantalum – Two Weeks on the Wrist

Under the bright booth lights at Baselworld, it’s far too easy for a watch like the Omega Seamaster Titanium Tantalum to disappear into the ether. With its soft colors, the watch blends into the light earth tones that Omega employs within its confines (or did, as 2018 was the last year for the brand at the show). And so yes, I consider this to be a bit of an already-forgotten piece despite the fact that it hasn’t shipped to boutiques yet – it’s planned for March. Therefore, I thought it wise to bring this Seamaster back to the forefront with a hands-on review. I kept and wore this watch for nearly two weeks and took a lot of pictures because, with this watch, the details are key. 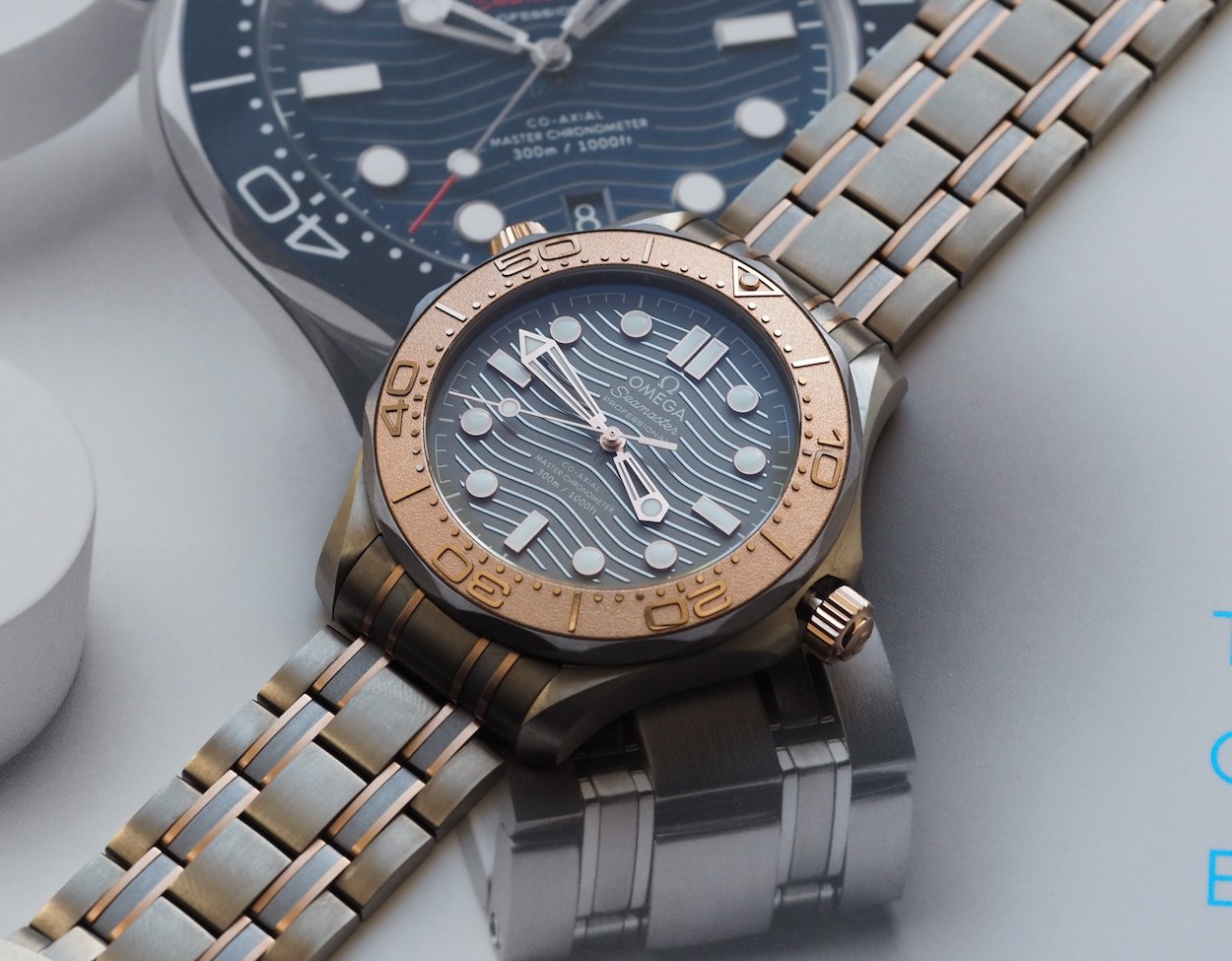 Omega seems to pick a major line as its theme each year and 2018 was most definitely the year of the Seamaster.   With anniversary pieces introduced that heralded the original model from back in 1948, it was a big year for the brand’s seminal diver. More importantly, though, a brand new 300M was released in many flavors. The watch brought back the “wave” dial made famous back in the Pierce Brosnan 007 days and likely due to that, competitive pricing, and fantastic build quality, it’s been a resounding success no matter the variant. But there on the side, and somewhat quickly discussed, we saw another addition to the 300M line in the Omega Seamaster Titanium Tantalum. 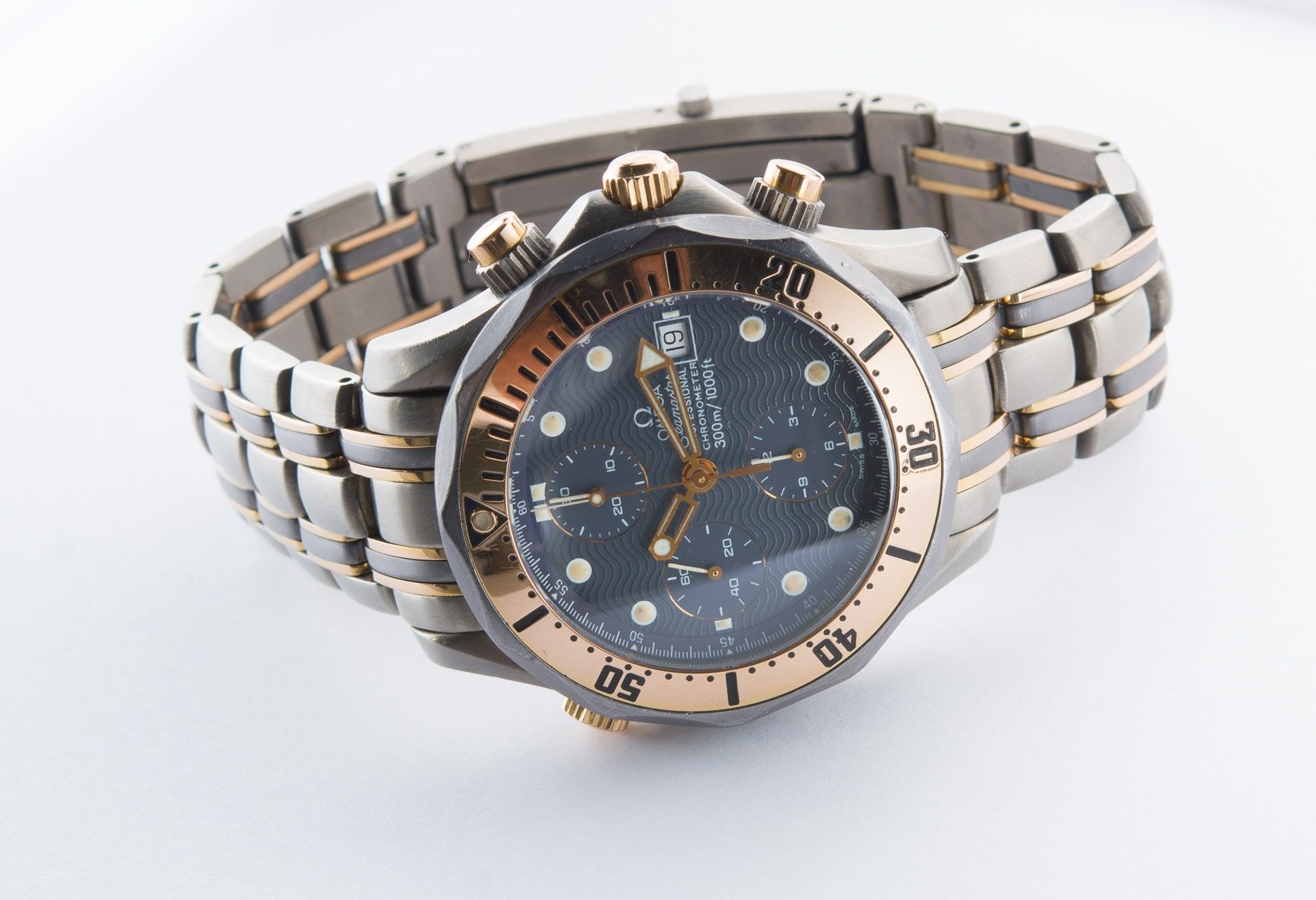 As a limited edition of 2500, the Omega Seamaster Titanium Tantalum is a curious piece; in fact, most suspect that its very existence is a consequence of it being a leadership passion project. The release is a somewhat unexpected curveball from Omega because it pays tribute to a 1993-era Seamaster Chronograph (ref. 2296.80 and seen above) that also contained tantalum: a watch that was notoriously expensive and, as a result, quite unpopular. Time heals many wounds, though, and the chrono has become a bit of a quirky cult classic – Robert-Jan owns one and it is most certainly a unique watch. Watch geek fave or not, though, it’s not a watch that most would deem as a likely candidate for some sort of a renewal. But, renew it Omega did and it’s these kind of unexpected treats that still make things fun. 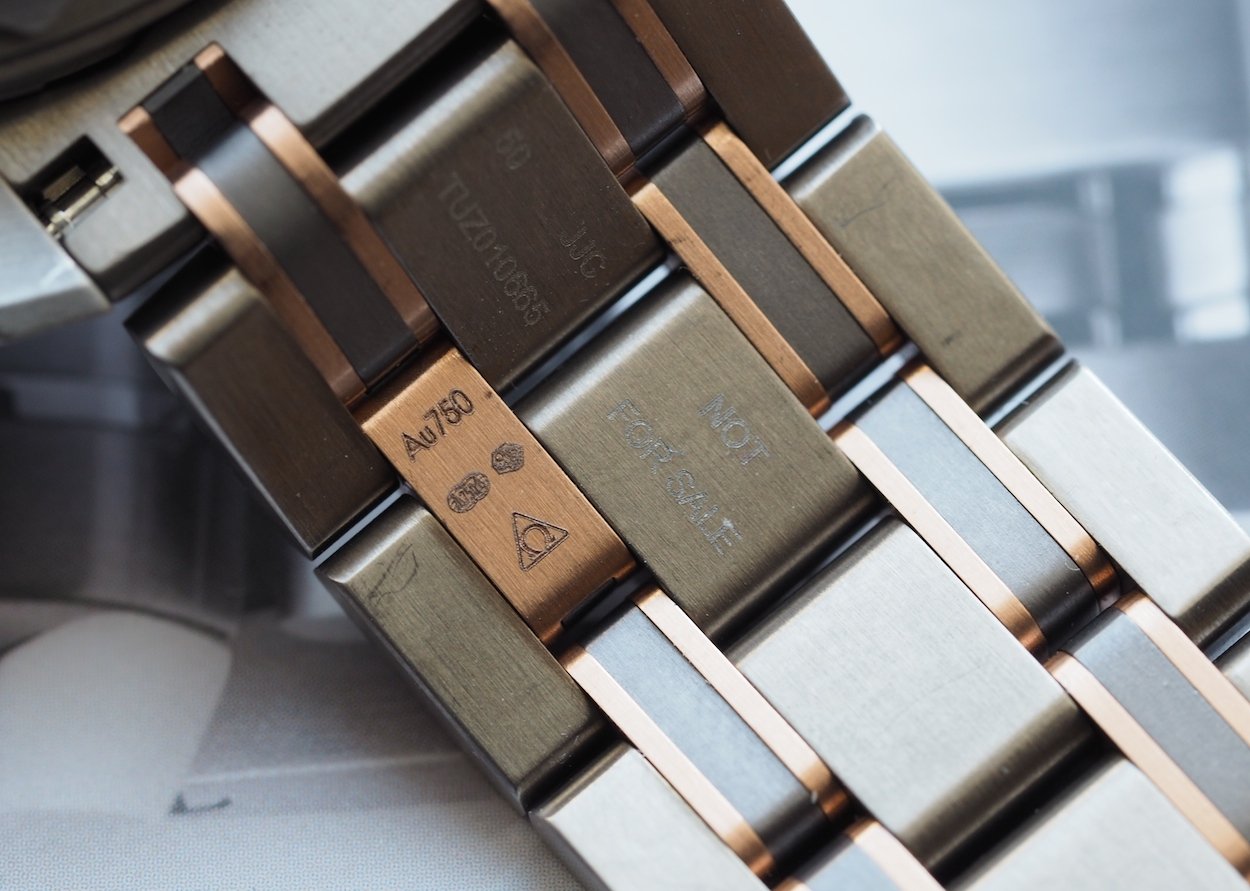 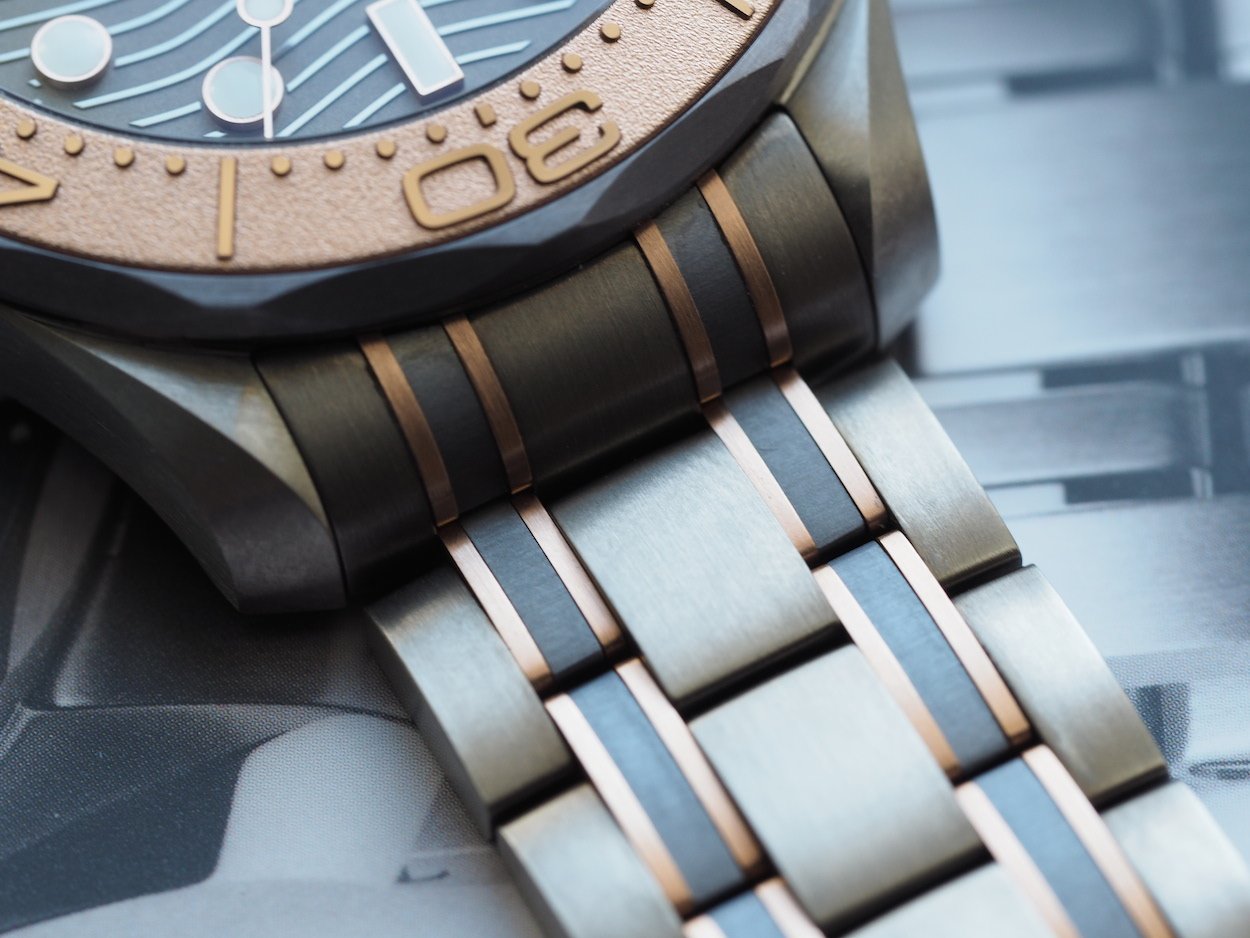 Titanium, tantalum, and Sedna gold all come together to create a very unique diver. Titanium dominates as the metal of choice for the case, most of the bracelet, and the dial. 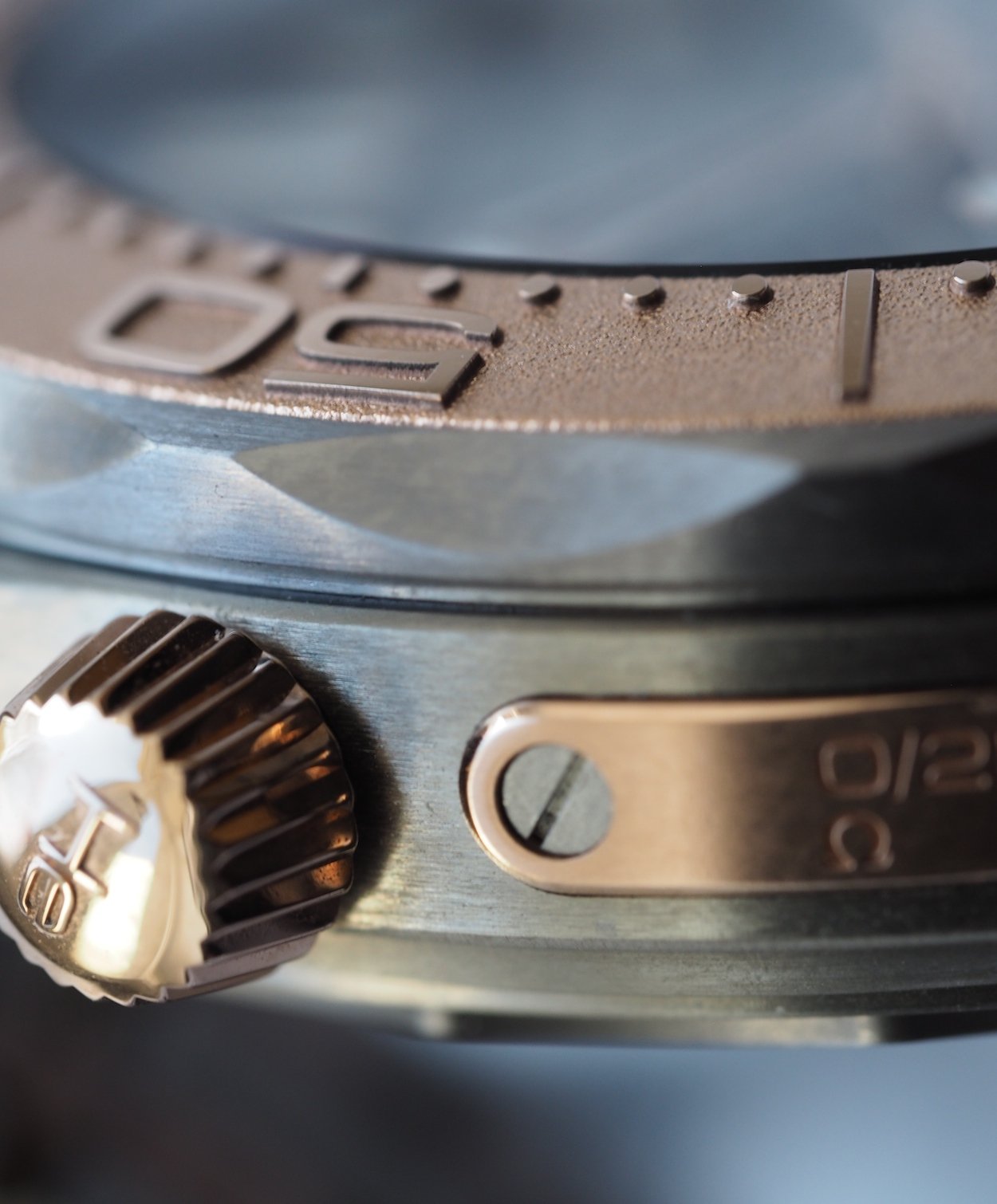 Tantalum comes into play as the darker metal found on the smaller bracelet links and is underlying material of the bezel. Finally, Sedna is used on the bezel insert, crowns, the bracelet, the hands/indices, and on a side-mounted applique showing the LE number. 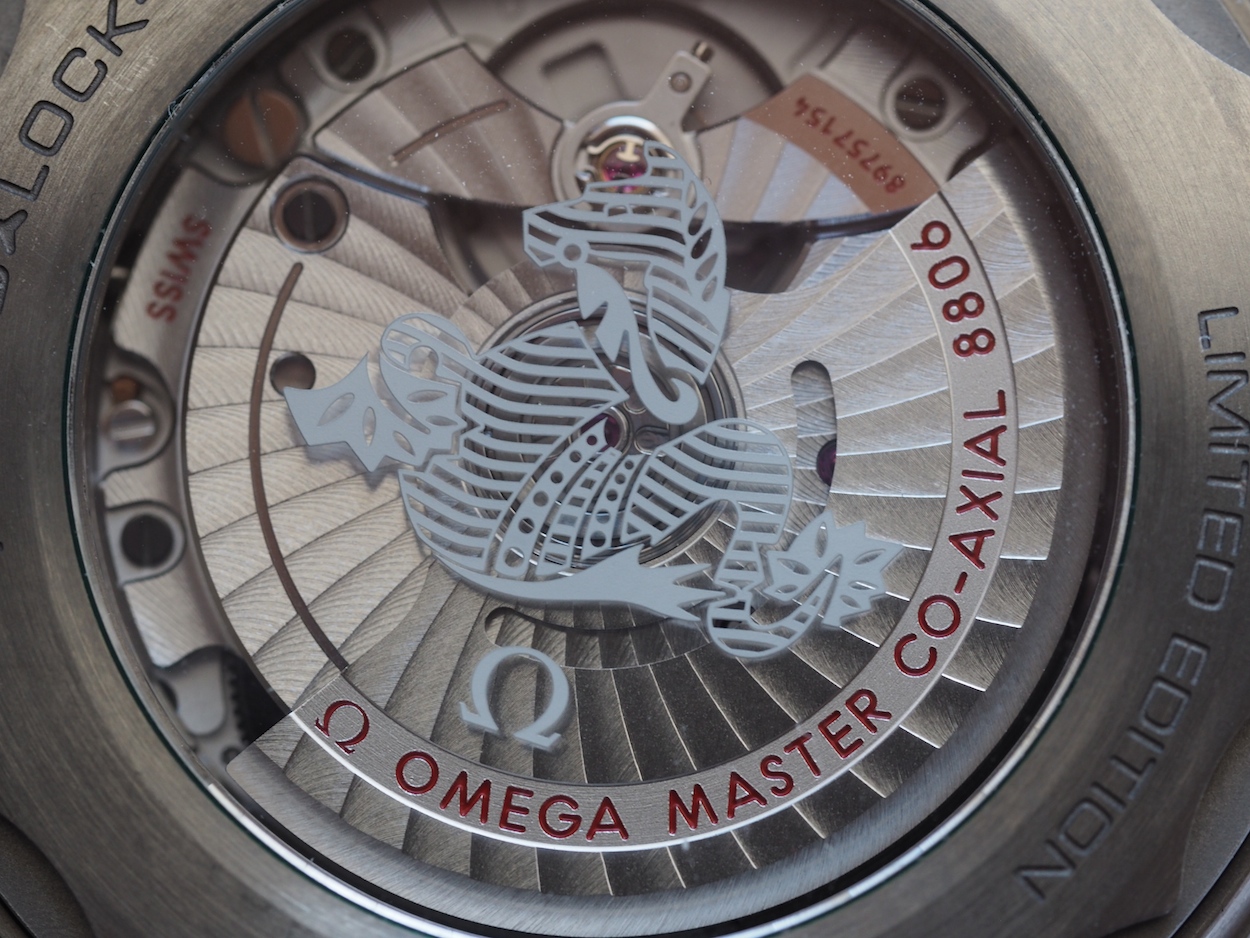 Continuing on with the formalities, the Omega Seamaster Titanium Tantalum shares its 42mm diameter case with the rest of the 300M series and employs the same clasp with underside push-button wetsuit extension. Inside, and visible through the NAIAD display back, we have the in-house ref. 8806 co-axial automatic. The 8806 is METAS-certified as a Master Chronometer. Unlike the other 300M models, the Limited Edition eschews a date function. Naturally, it hacks and can be hand wound via the Sedna screw-down crown.   The bezel is uni-directional and the Superluminova checks in with a soft greenish-blue color. 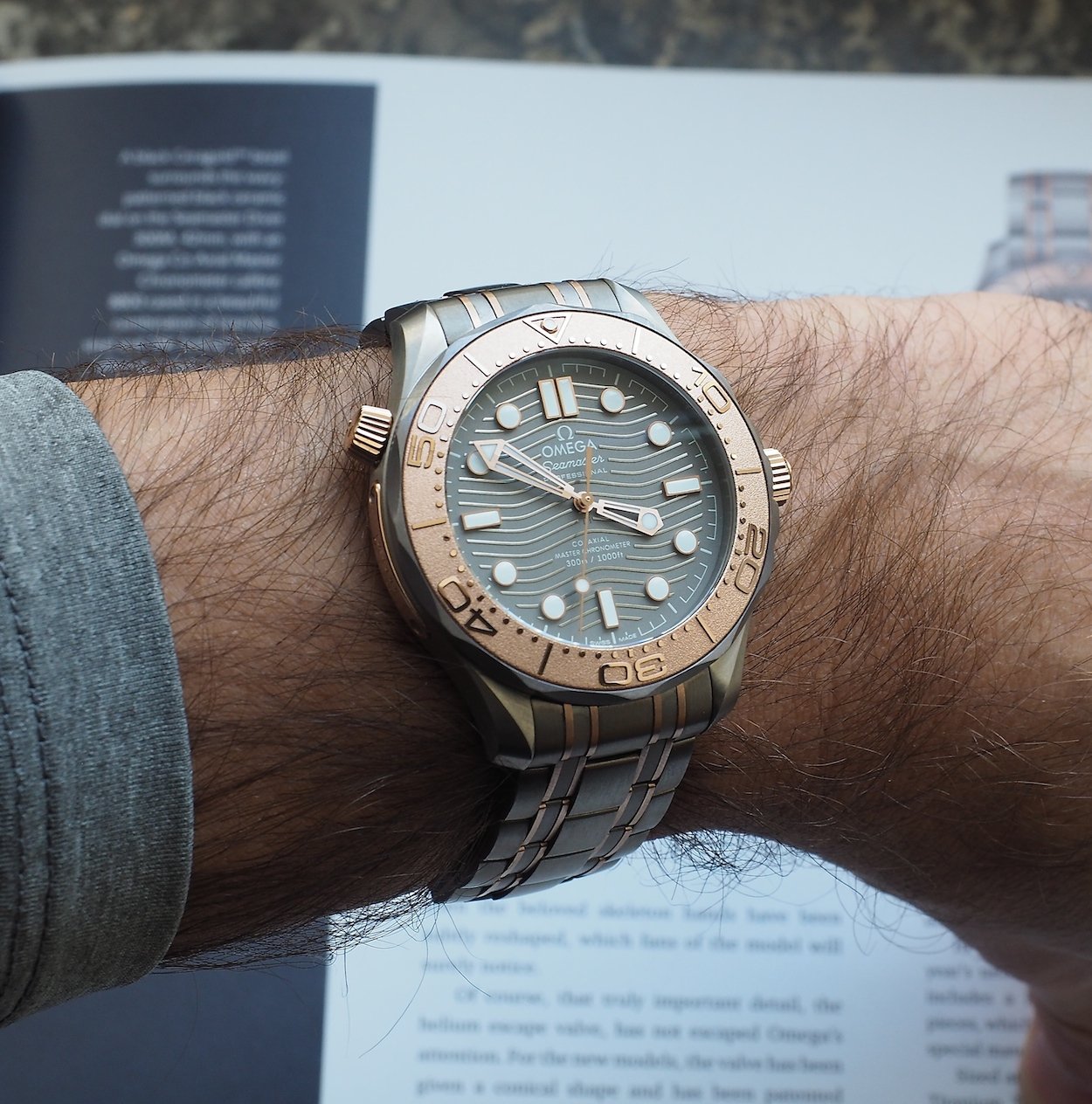 So you can tell that I’m deeply attracted to the new Omega Seamaster Titanium Tantalum, but why? I’ll start with the bracelet. I’m a vocal critic when it comes to most of Omega’s designs for its sports watches. First, off, I find the clasps too large, thick and blocky. Yes, I have a notably small wrist, but I find that Omega clasps span the entirety of the underside of this part of my anatomy. 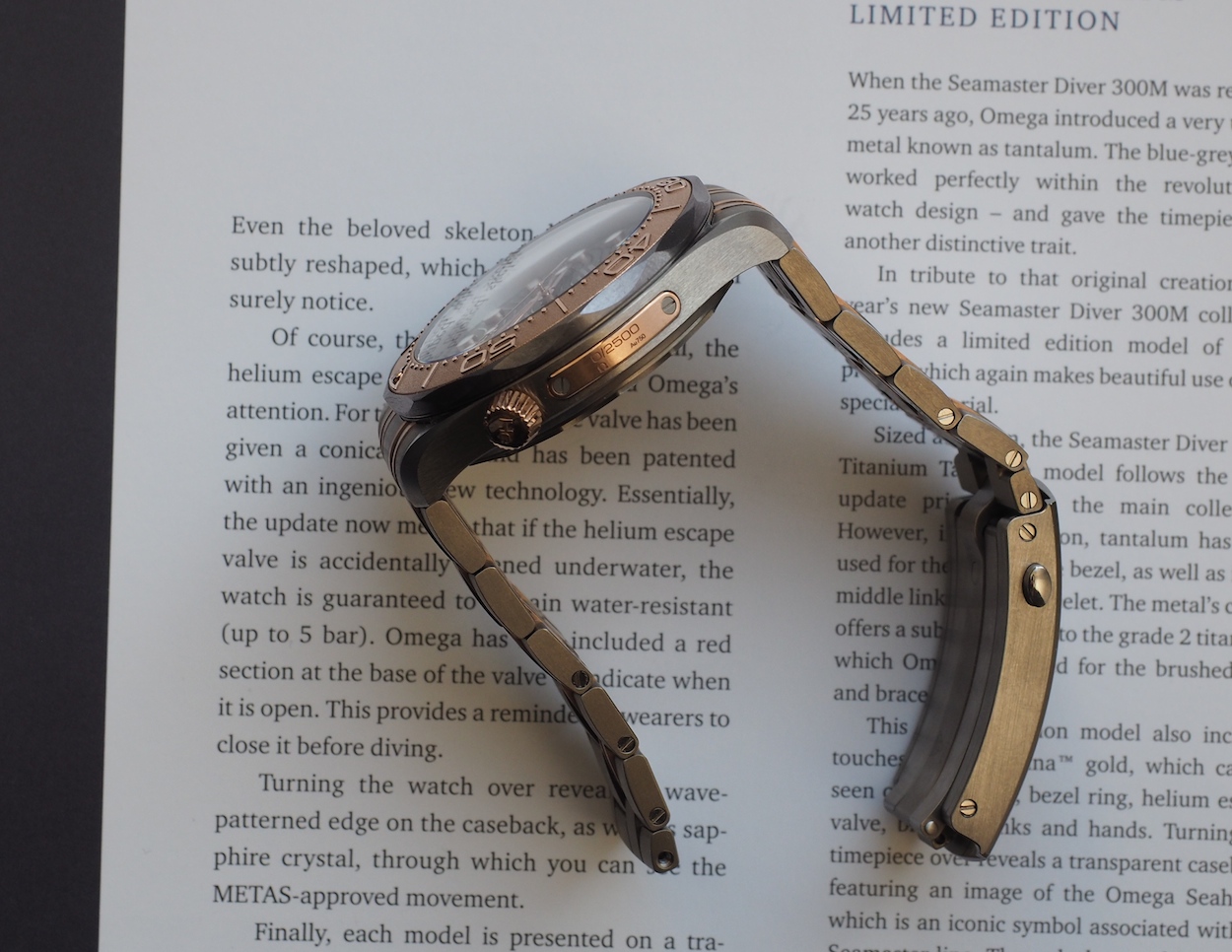 That’s no different on this model and I still think there’s room for improvement despite the smooth functionality of the push-button microadjust. I can live with that, though, because I know there’s zero chance that a nice lightweight stamped clasp will make a comeback – and, the front of the watch fits so well. But what is almost always a non-starter for me is the design of the links on an Omega bracelet. Those little shiny sub links just don’t look “tough” enough or functional to me. They’re not quite beads of rice and they’re certainly not Oyster. It really has little to do with the comfort level because the links are smooth enough and articulate well. Well, it was a revelation that the bracelet on the Limited Edition is a stunner. 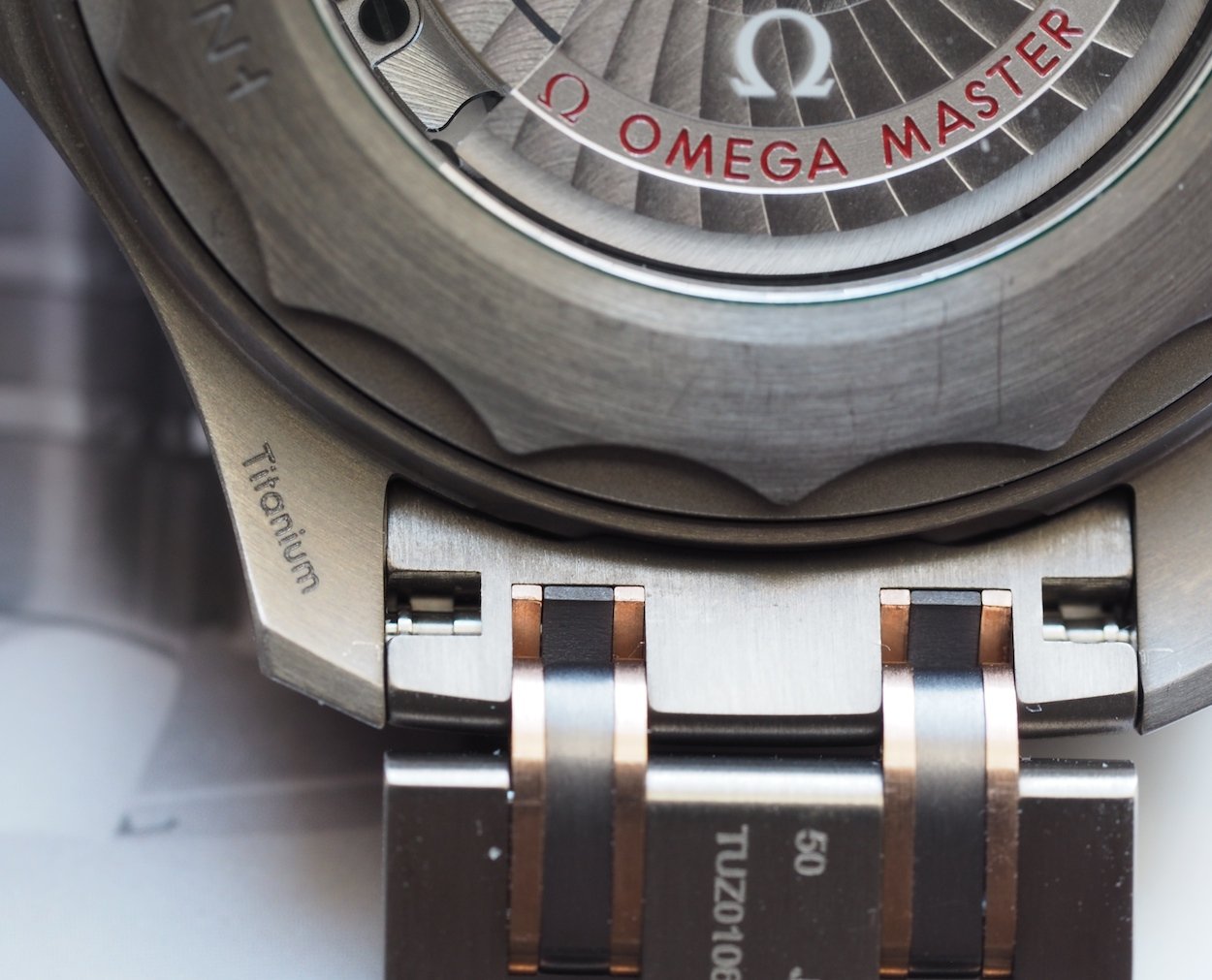 No, the overall design isn’t an aberration, but the execution of it in the three different metals is fabulous. The tantalum appears to be clad or rolled into slots made up by borders of Sedna gold. In fact, it’s when examining the end links – especially from the backside – that the detailing can truly be seen. There’s even one sub link that only contains tantalum and gold on its front in order to properly exhibit the gold hallmark on the all-gold reverse side. Plus the tantalum within the links contains a very – almost graphite pencil-like – interesting surface finish when juxtaposed against either the gold or the titanium. While I’ve done my best to capture these details photographically, there’s something to be said about holding it in person. 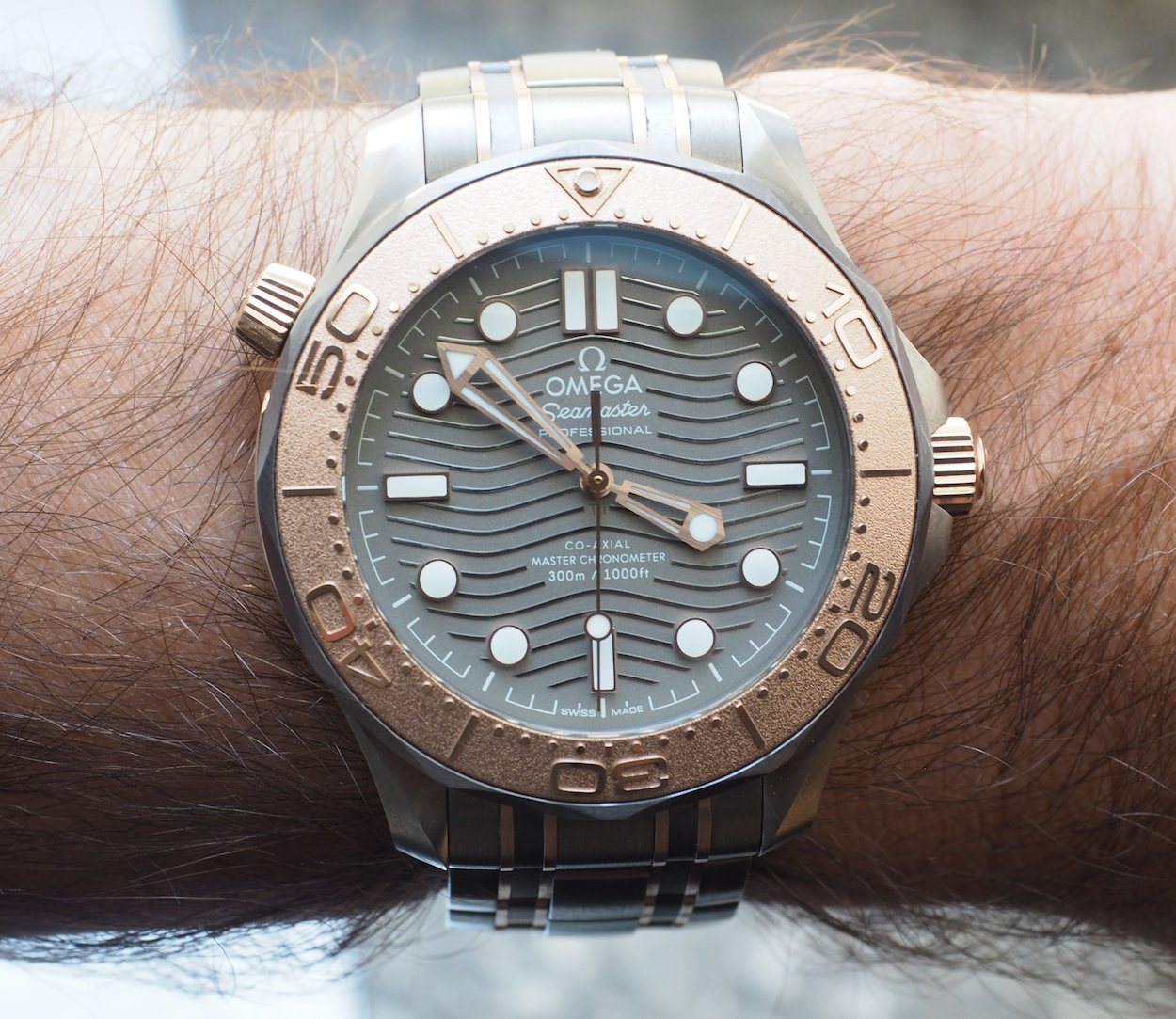 Color Choices that Work on the Wrist

I’m also a huge fan of the bezel on the Omega Seamaster Titanium Tantalum. Whereas the normal models have opted for what is quickly becoming the industry standard in ceramic, this watch uses Sedna gold. Here again, the finishing makes it eye-catching. The raised numerals, minute track and arrow are polished and are set against what is best described as a sandblasted background. I’d posit that such a material choice isn’t an obvious choice for a capable dive watch and it definitely lacks the lume of some competitors, but it sure as hell looks classy. One could also state that this is the most ostentatious feature of the watch, but the rose gold becomes subtler once the watch is on the wrist. Sedna, especially in matte format, is almost skin-toned. 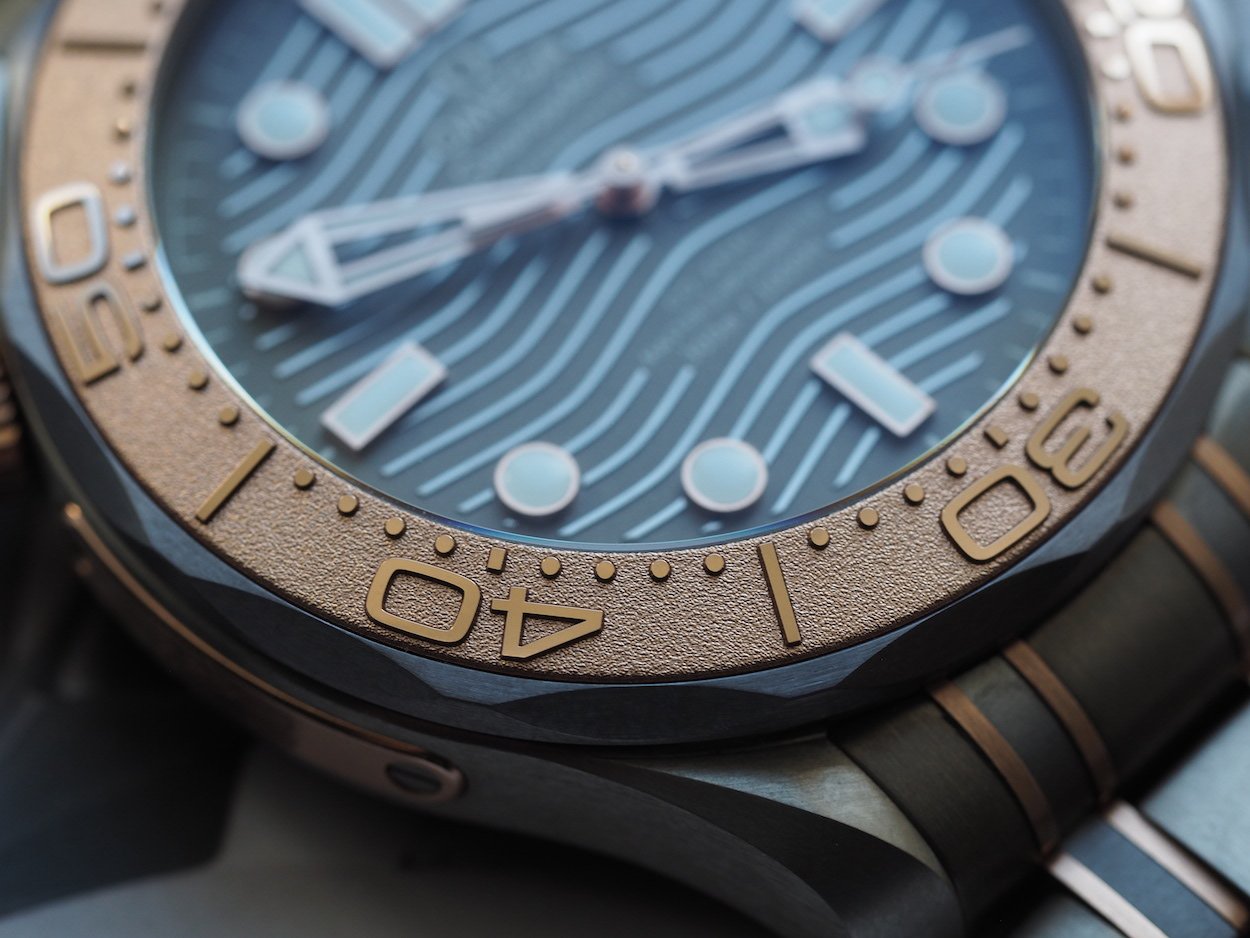 As mentioned, the Sedna bezel insert sits within a rotating tantalum bezel. The darker metal isn’t obvious in some lights and if it wouldn’t have ruined the purity of the Sedna, I’d say that some of the dark grey stuff should have found its way into the insert. In the right lighting, though, it contrasts nicely against the titanium case. 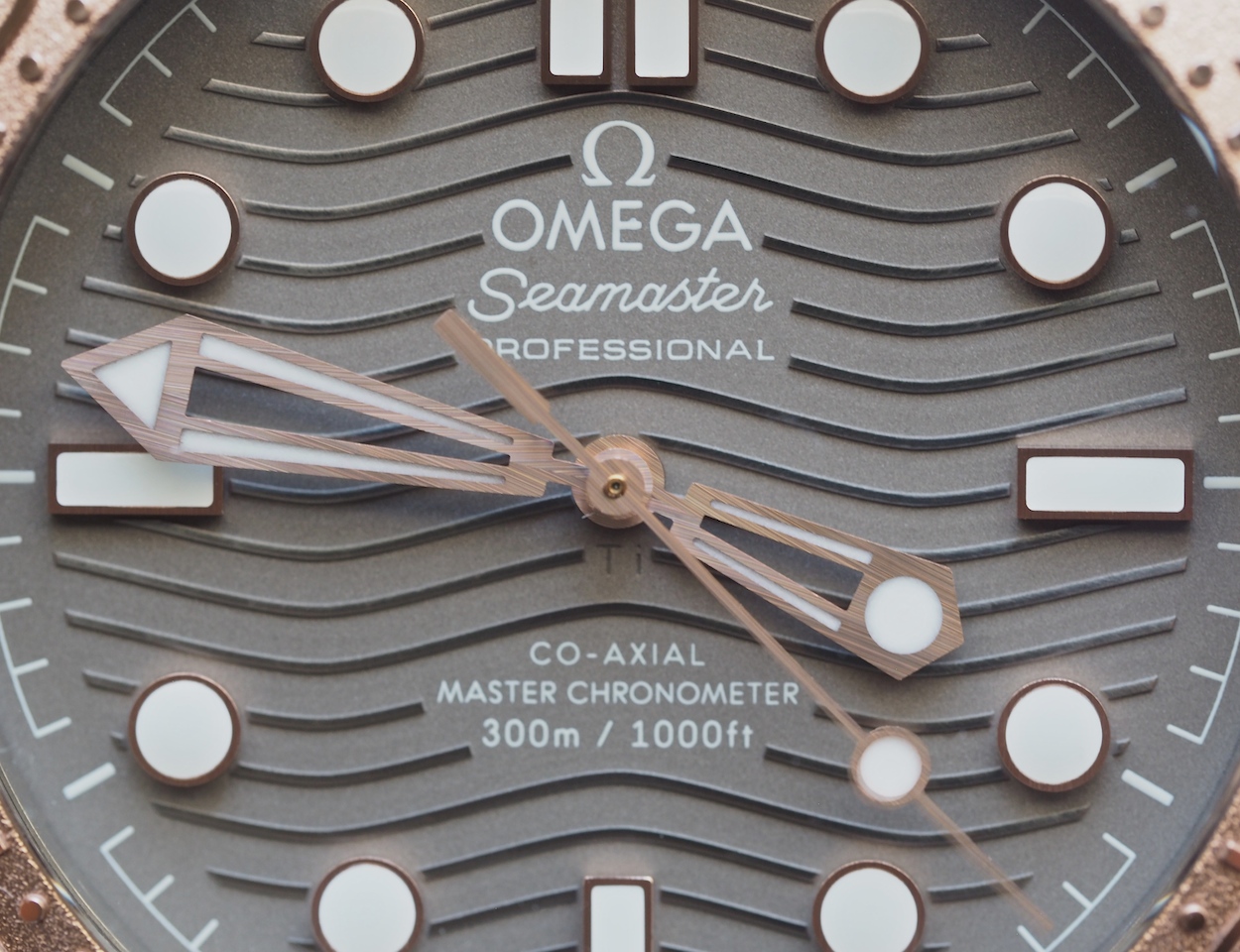 Dial-wise, the Omega Seamaster Titanium Tantalum diverges from the rest of the steel-based 300M collection by using titanium in lieu of ceramic for its dial. Also, whereas the ceramic-dialed pieces have wave lines that are set into the dial, the LE’s waves are actually raised. In fact, it’s similar to what you’ll find on the newly released 43.5mm titanium/ceramic models texture-wise. Here, though, the titanium dial shows in a case-matching grey hue, which contrasts nicely against the brushed Sedna hands and applied indices. For those who enjoy the look of an uncluttered face, you’ll be pleased that Omega decided not to fit this Seamaster with a date wheel. Some might be displeased with the choice, but I like the differentiation when compared to the regular models. 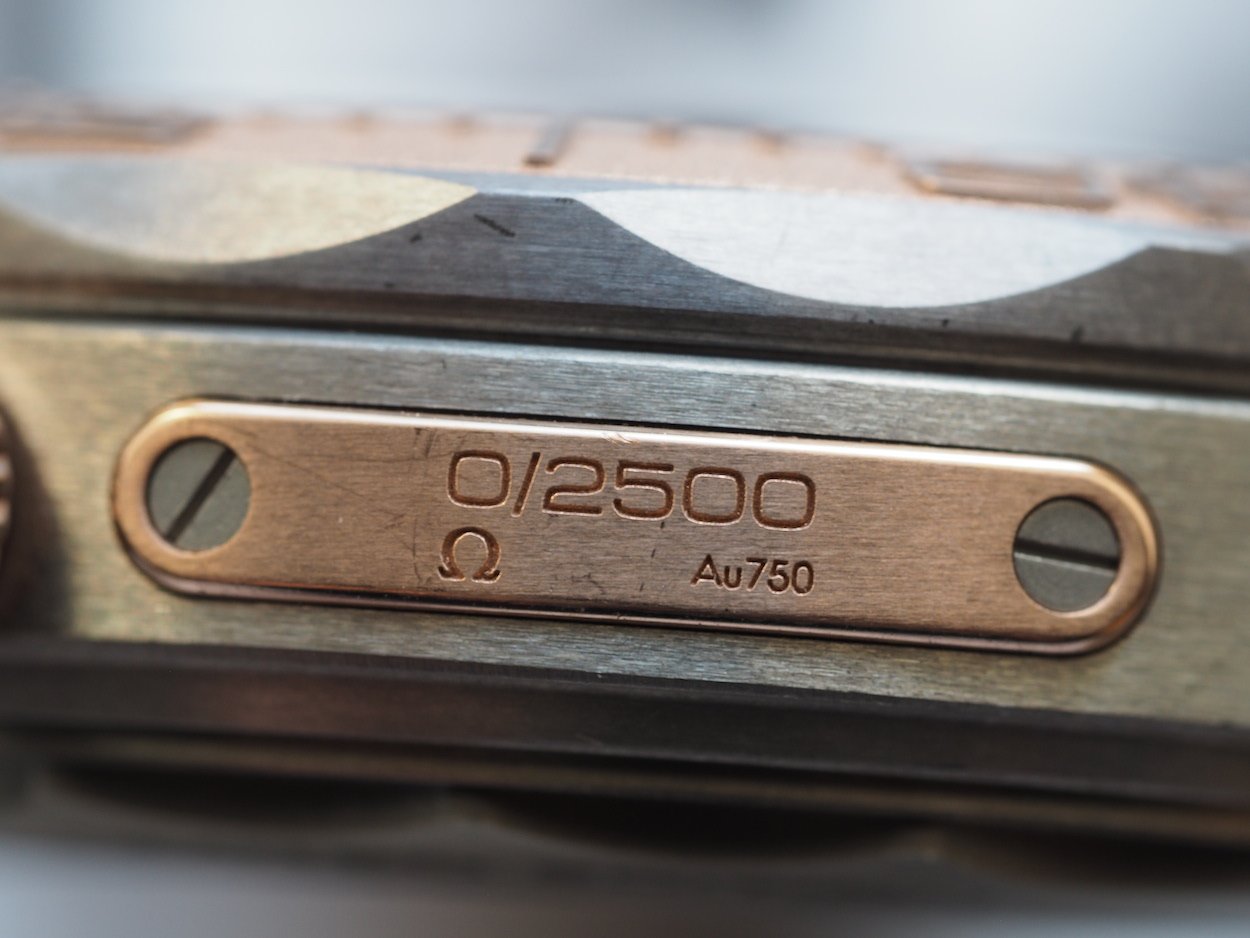 There were a few design choices on the Omega Seamaster Titanium Tantalum that I wasn’t sure about when I first received the watch. After a week or so, I softened my stance. First, you saw that I ended up liking the bracelet for the most part. Next, this Seamaster contains an applied tag on the side of its case showing the serial number. It’s attached with a couple of screws and while it’s nicely executed, it’s kind of showy. It reminded me of something one might see on a dress watch. Fortunately, it’s largely obscured when on the wrist, but I’d be happier to see the LE number inscribed on the back of a lug instead. 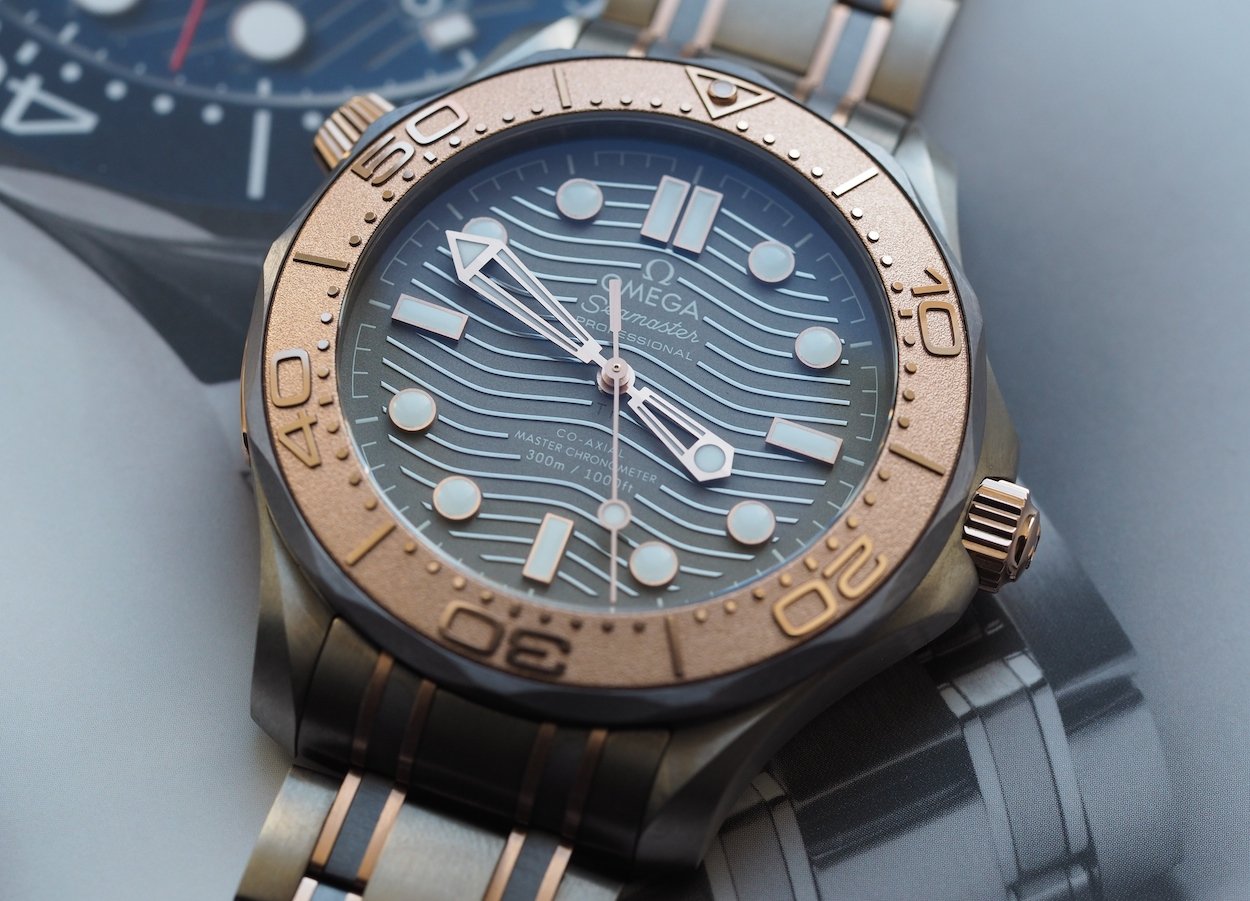 Next, I know that the inclusion of a helium valve crown is a hallmark of the 300M line, but I still consider it superfluous and it breaks up what would otherwise be a nearly perfect case design. I will admit, though, that the new conical crown design does make it less noticeable. Furthermore, the Sedna disappears against the wrist. So, in the end, it wasn’t a big deal for me, but I did enjoy putting my thumb over it to see what the watch would look like without the protrusion. 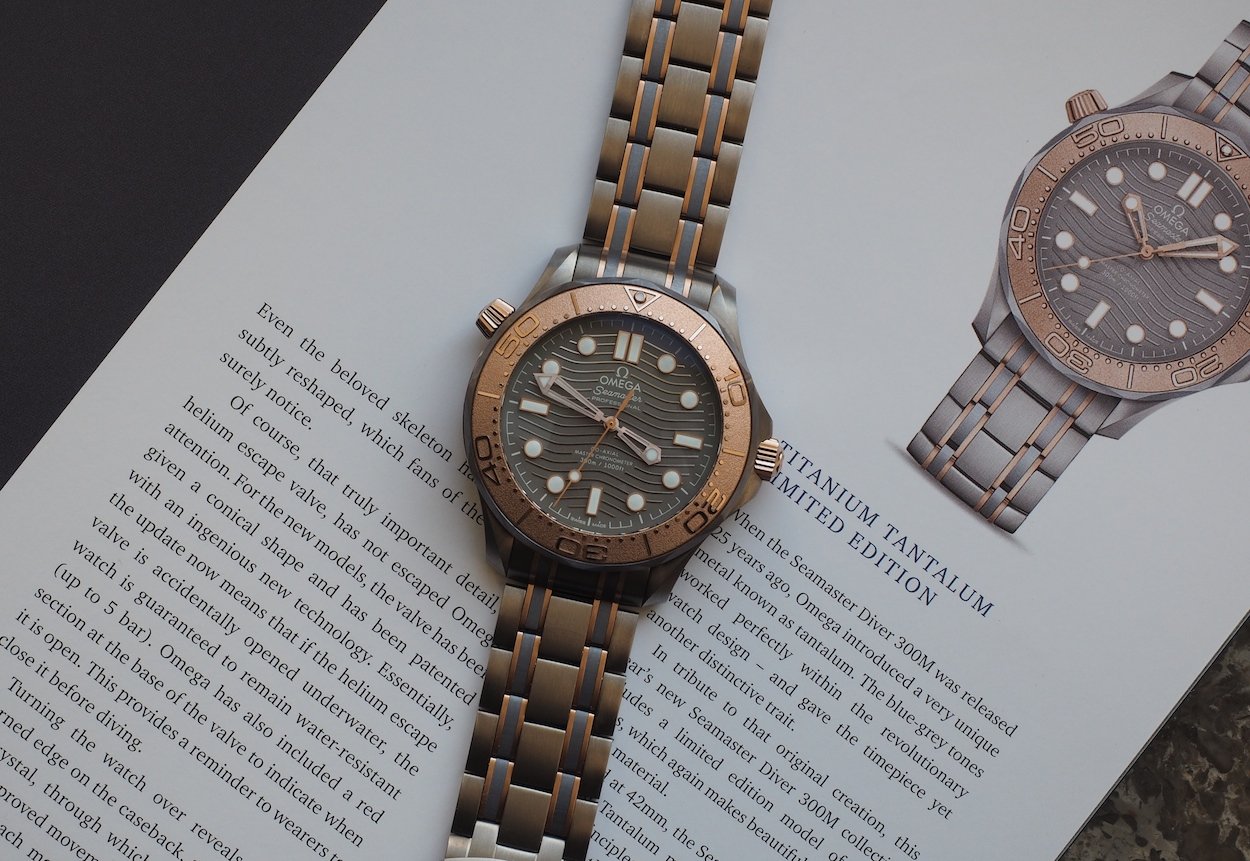 So, now we get to the most controversial part of the Omega Seamaster Titanium Tantalum and that’s the price. At 12,100 Euros in Germany, I’ll admit that’s rather eye-watering. In fact, it’s just like the original Titanium Tantalum chronograph from years back: very, very expensive. Now, I gave it real thought and what’s interesting is that a gold and steel 300M on bracelet comes in at 8,900 Euros and that might be the biggest concern. A two-tone Rolex Submariner, by the way, comes in at 12,700 Euros. So, at 12,100 for this Limited Edition Omega, perhaps it won’t shock everyone, but it’s a lot of money. 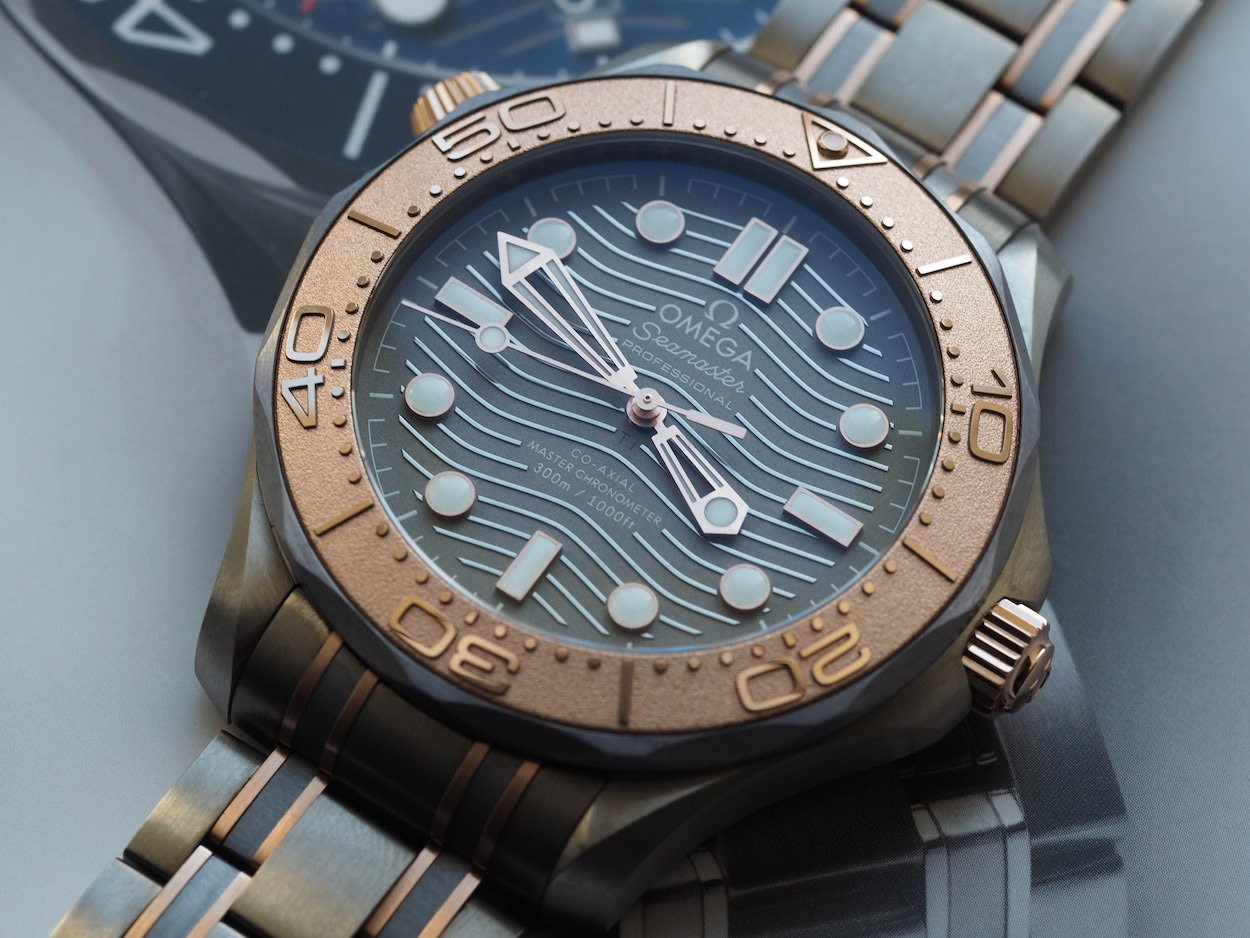 The Omega Seamaster Titanium Tantalum is easily one of the most distinctive and enjoyable new watches I’ve had on my wrist in a long time. I know that the color scheme is a bit controversial and, heck, some may even find it more suitable for females (my wife loves it). If one can get past the price of entry, I think they’ll be left with a very different type of diver that boasts sublime finishing and detailing. Now, let’s hope Omega gets these to boutiques soon and puts them in the front window.