It's up to you which Speedmaster will proceed to the quarter-finals.
Gerard Nijenbrinks
comments 18
Share

Welcome to Group F of the Speedmaster World Cup. In the absence of Euro 2020, we thought our beloved readers might enjoy a tournament of a different kind. We’ve assembled eight groups (A–H), each governed by a different Fratello team member. Each writer has been assigned four watches, which they will pitch to you during the group stages.

All we need you to do is vote for your favorite to move on in the competition. The next round will be the quarter-finals, which will see the eight group winners go head-to-head for your votes. The four winners progress to the semis. Following that, a third-place play-off will precede the final round, due to be held on Sunday, December 13th (get the wine in…). 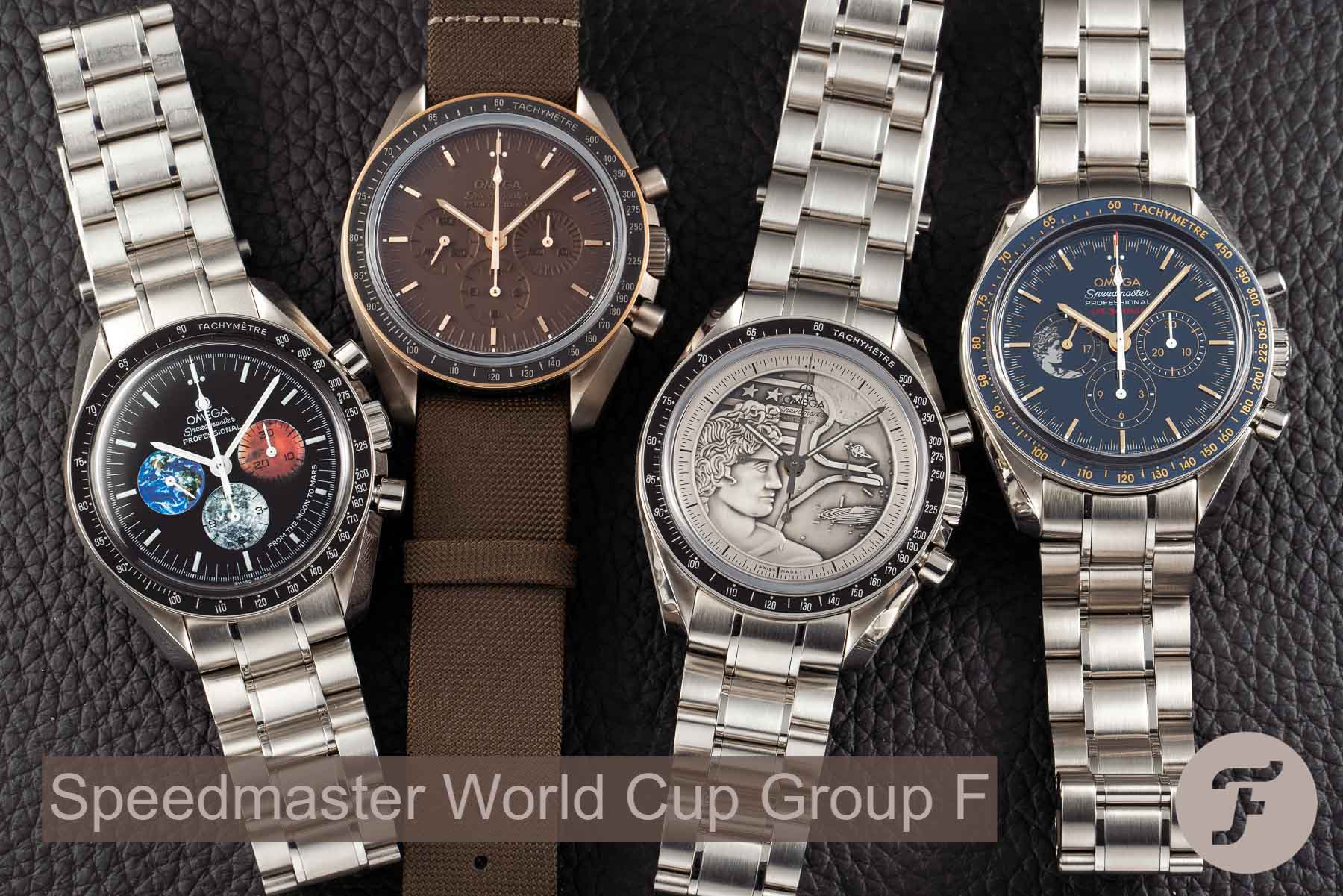 So here are three limited Omega Speedmaster Professional models and one numbered edition to choose from. Only one of these four can make it to the quarter-finals, so please judge wisely. 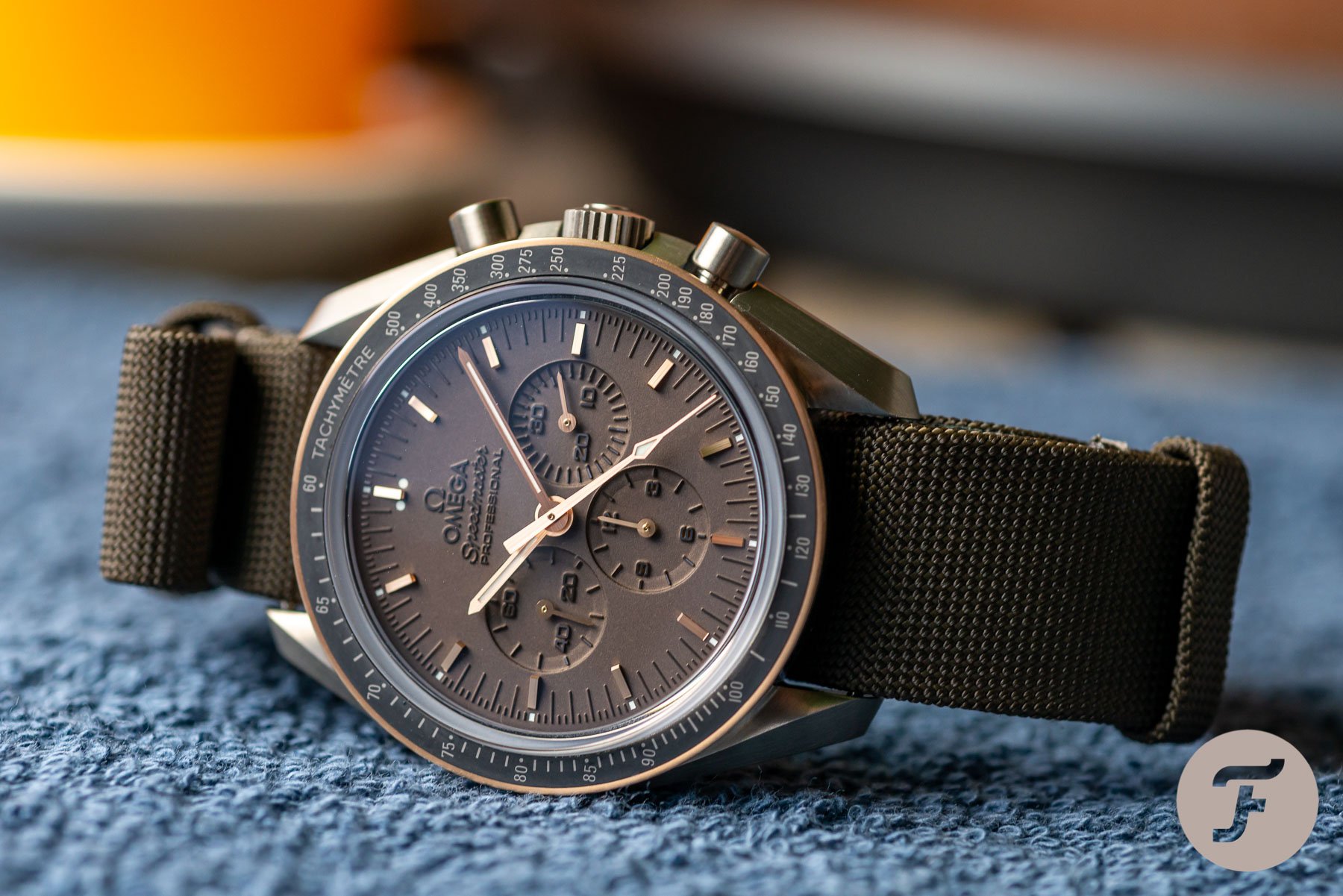 The first one is my personal favorite in this group, the 45th-anniversary edition of the Apollo XI moon landing. Omega started with regular moon-landing commemorative editions back in 1989 (20th anniversary). This model, introduced 25 years later in 2014, is the current penultimate Apollo XI edition. Last year, of course, we saw the 50th-anniversary model.

Most intriguing about this 45th-anniversary model is its brownish dial. The logo and wording have not been printed like we are used to but were created using a special laser, cutting it out from one piece of material. This created the nice-looking dial by removing all material surrounding the logo, model name, sub-dial numerals, minute markers. The use of 18-carat red gold for the indexes and hands contrasts nicely with the brown dial. 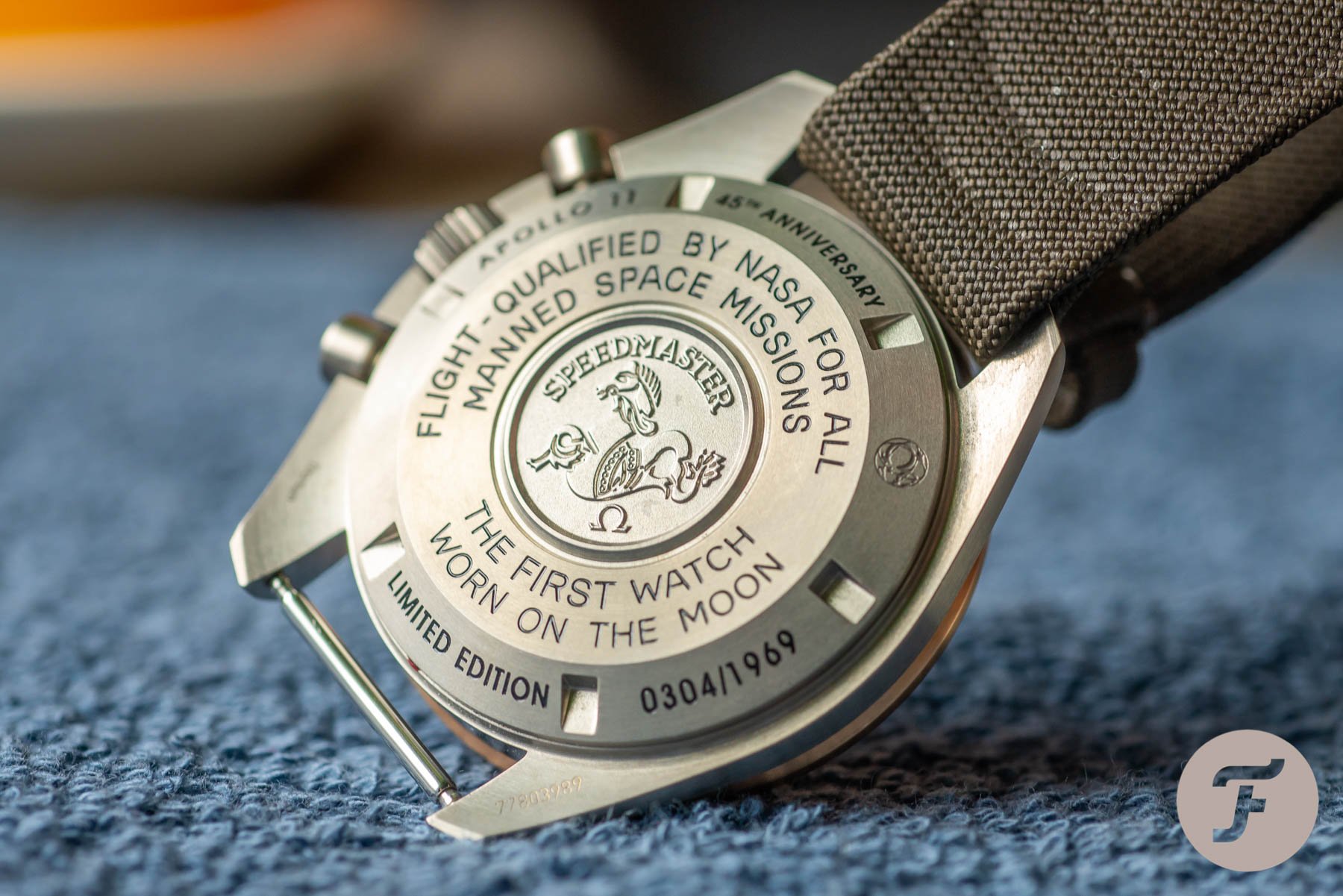 The second-most important feature is the brushed case, made from grade-2 titanium. Using titanium for this type of Speedmaster Professional casing was a first for the 45th-anniversary model. Omega produced 1,969 pieces of this watch. A full review can be found here. 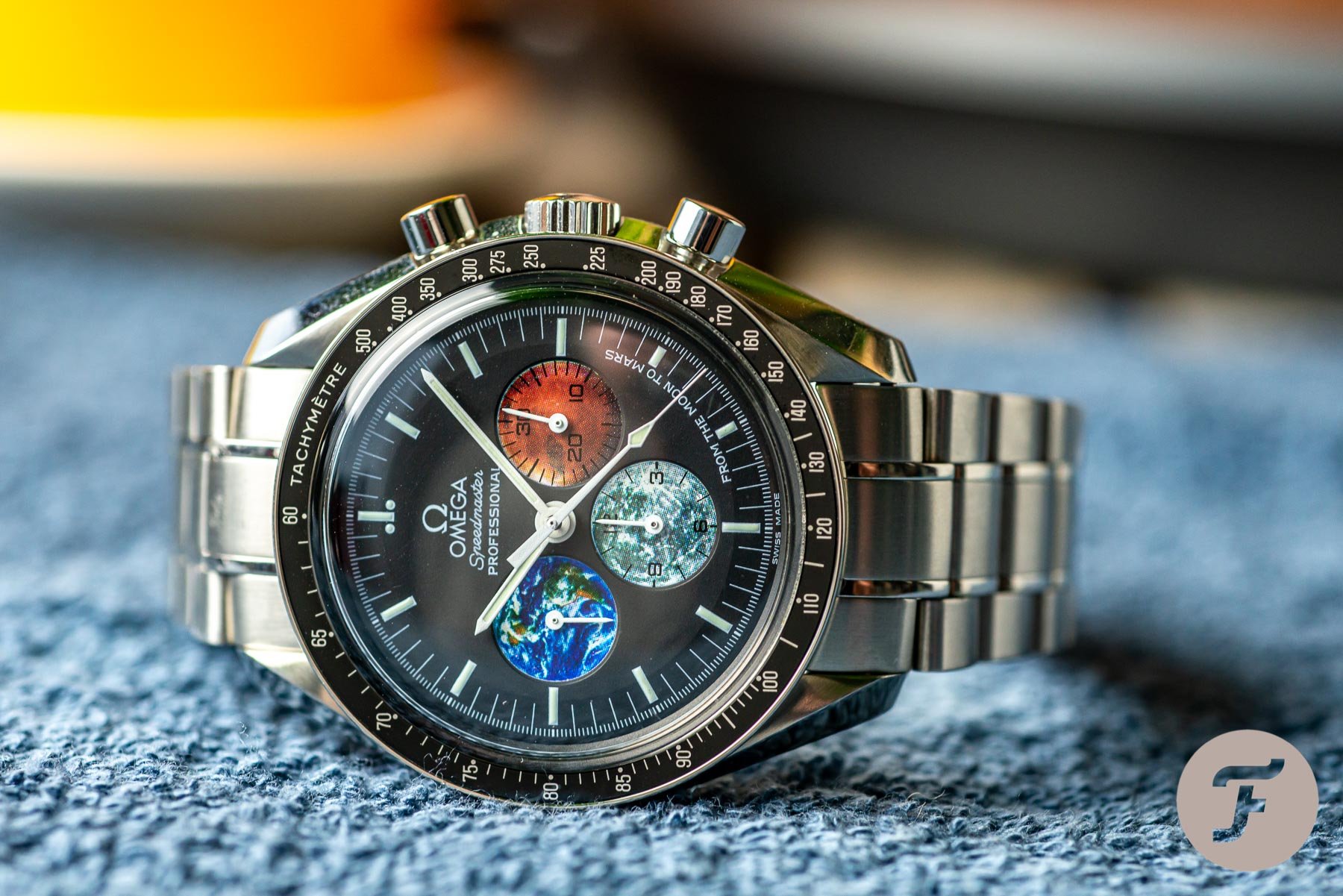 Omega Speedmaster From the Moon to Mars

In this Group F, the second Omega Speedmaster is a model that many consider an ugly duck. It’s the From the Moon to Mars numbered edition. I still remember the introduction on April 17th during Baselworld in 2004. There was a special press conference with astronaut Gene Cernan, Omega CEO Stephen Urquhart, Nick Hayek, Nicolas Hayek, and Swiss astronaut Claude Nicollier. 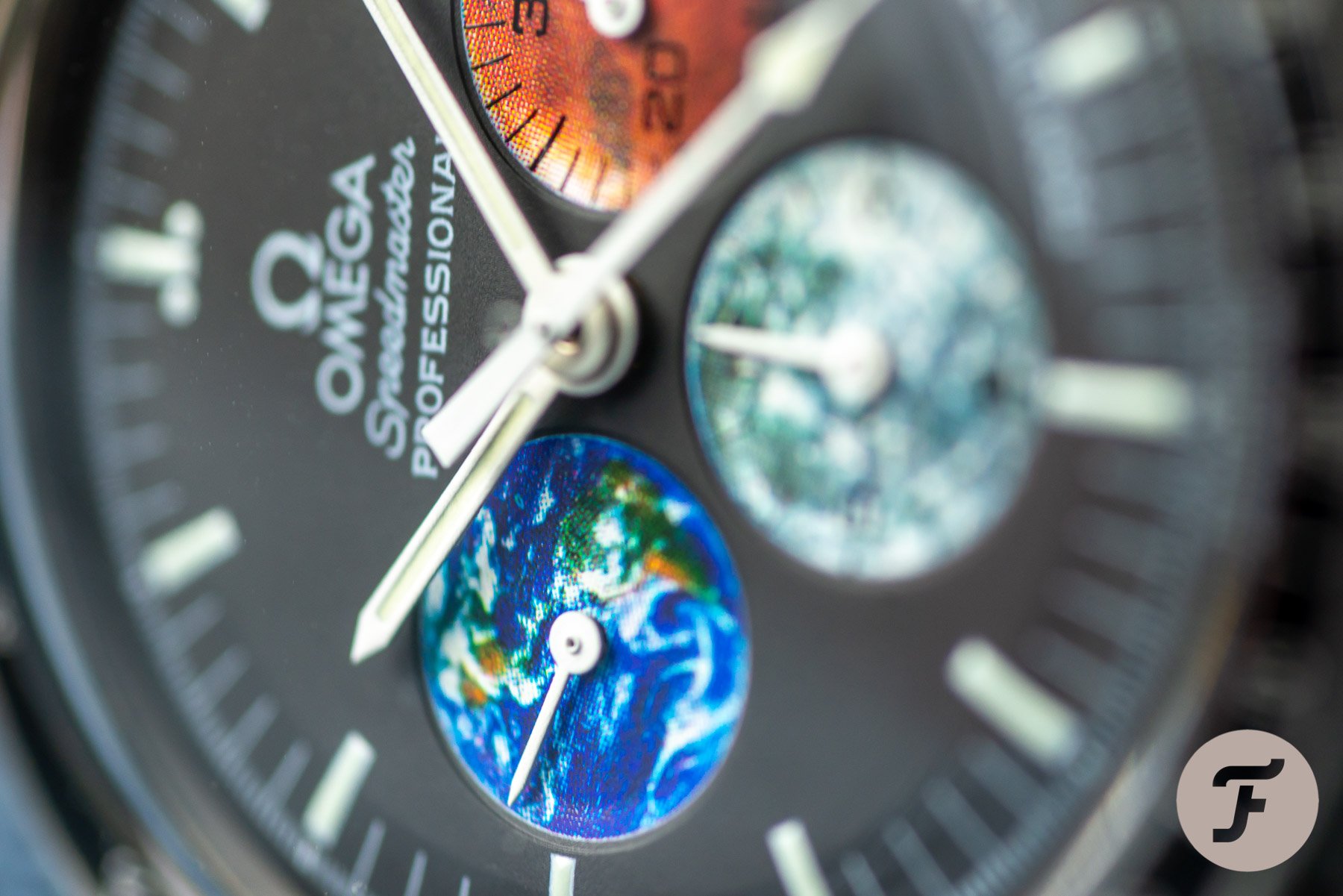 The main reason why many people consider From the Moon to Mars an ugly duck is because of how the printing of the subdials was done. Not only because they’re so colorful, but also for the quality of printing. The more or less photo-realistic planets – earth, moon, and mars – have quite a grainy resolution. 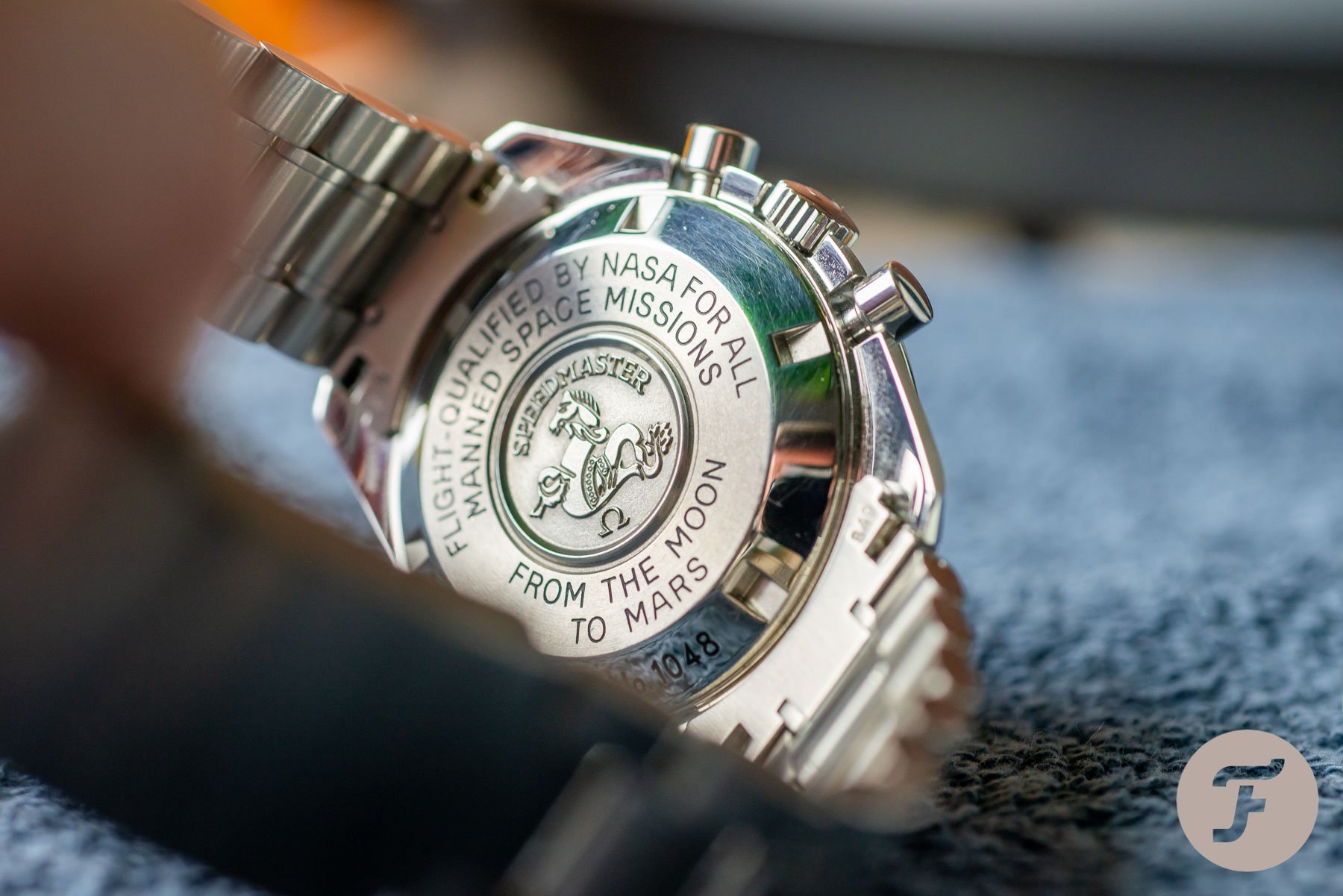 The Omega Speedmaster From The Moon to Mars — ref. 3577.50 — was in production from 2004 and discontinued around 2012/2013. An exact number of the total production is unknown, but the consensus is that over 6,000 ongoing numbered pieces exist. Our review on the From Moon to Mars edition is here. 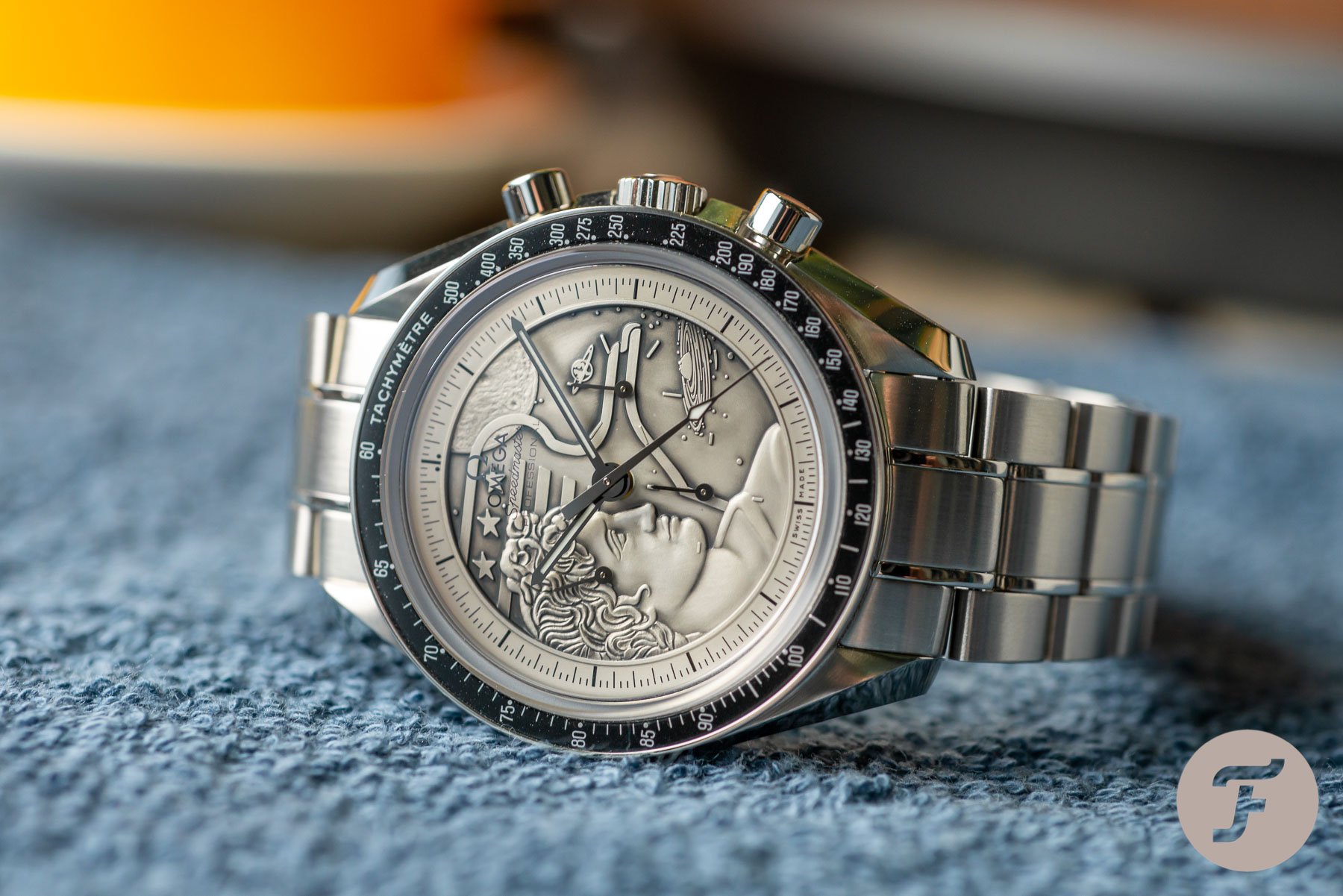 The Speedmaster Apollo XVII uses an engraved, hand-patinated coin of 925 silver for its dial in the mission patch’s guise. There’s no real sign of sub-registers, and the watch is pretty useless when it comes to being used as a chronograph. The main pull of this watch is its dial, considering it is a “piece of art”. I do understand that for many, this watch as a Speedmaster is out of their comfort zone. But let’s not forget the marvelous skeletonized models by Armin Strom that Omega made for their looks rather than for functionality, as well. 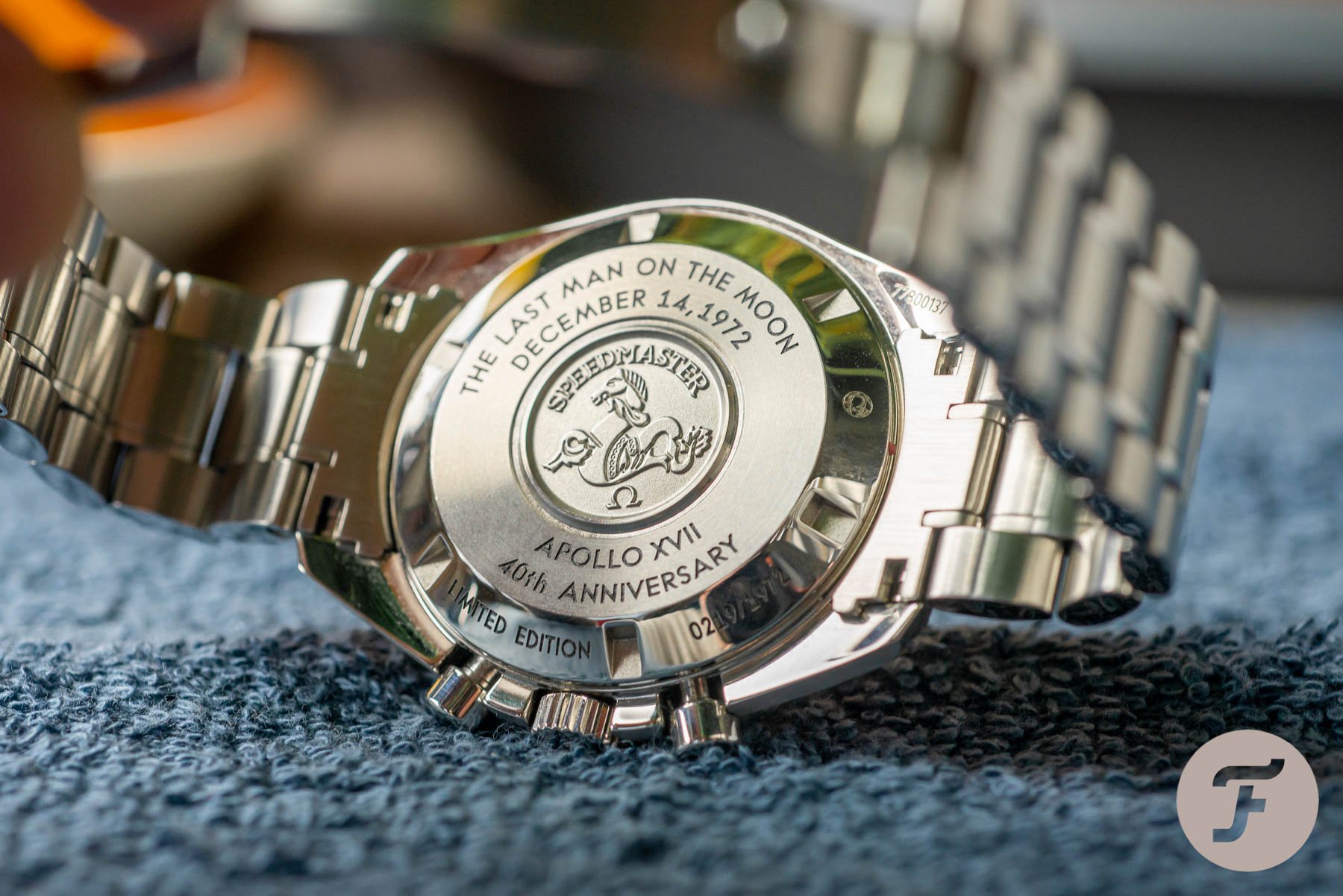 1,972 pieces of this Omega Speedmaster were produced, and I must admit, it took a little while to sell them all. I must urge you to see this watch on your wrist before judging it. It probably doesn’t won’t remind you very much of the Speedmasters, you know, but it’s a beautiful piece of art. We didn’t do a true review of the Speedmaster Apollo XVII 40th anniversary yet, but Mike wrote an entertaining Wrist Game or Crying Shame article here. 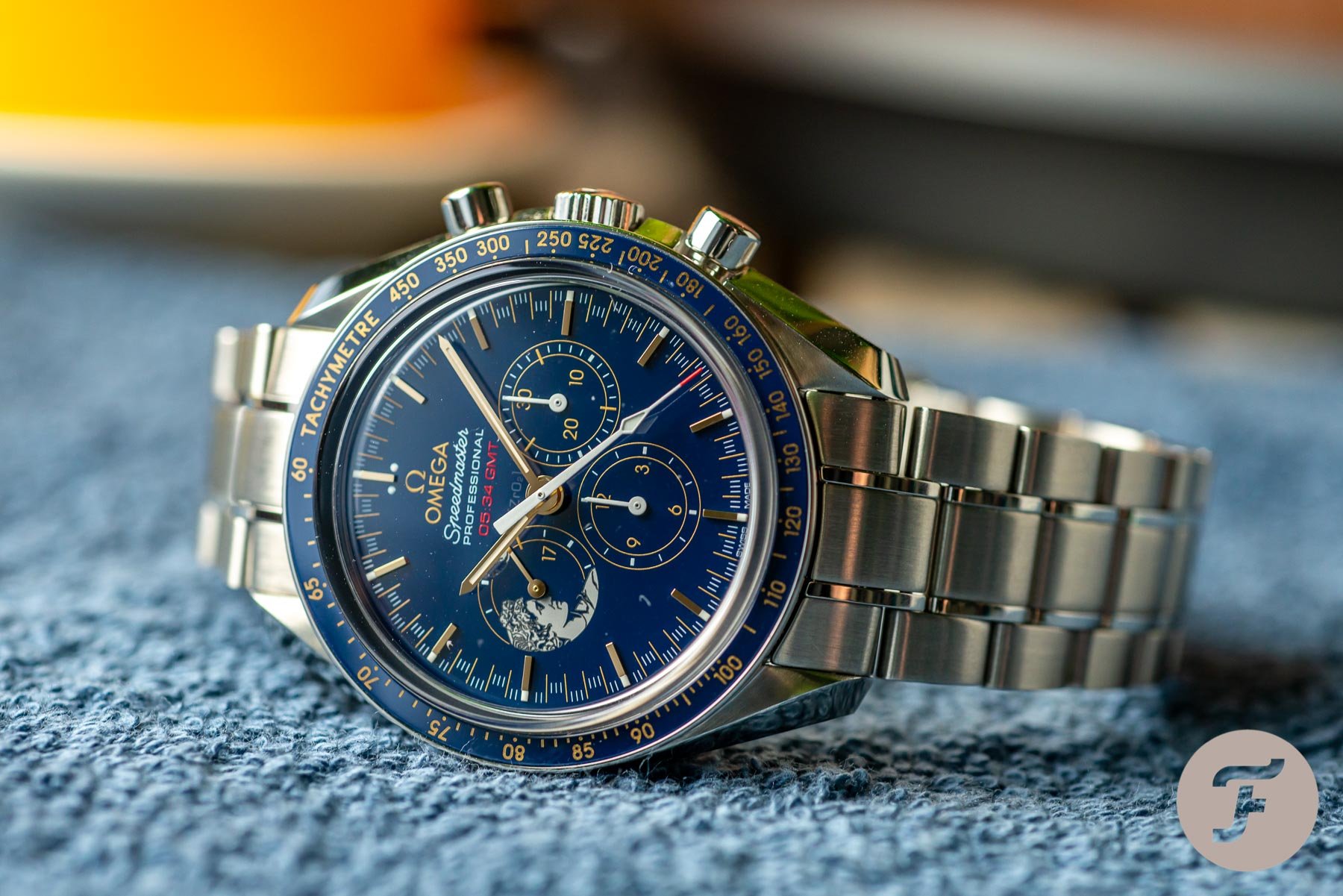 Last in Group F, but surely not least. Yet another Apollo XVII commemorative edition. This one is a tribute to Gene Cernan, who unfortunately passed away in January 2017. That year it was 45 years ago that he became the “Last Man on the Moon”. Again, the dial is what immediately attracts to this model. The Apollo XVII 45th edition uses blue ceramic for its dial and bezel. The blue bezel uses Ceragold for its tachymeter scale, a patented process to create a seamless integration of ceramics and gold. 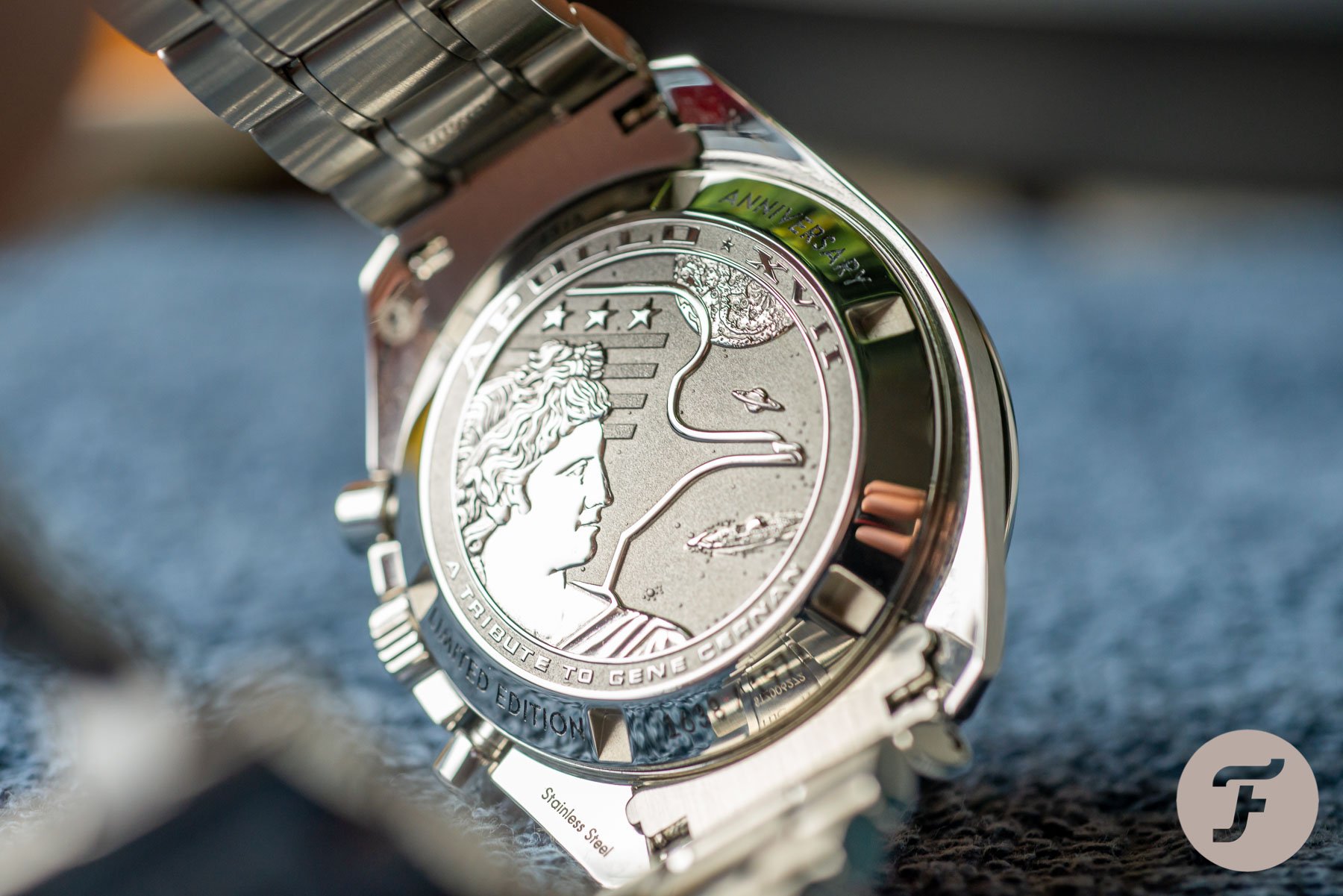 Below the name and model indication in the dial, you’ll find 05:34 GMT printed in red. It refers to the exact time when Eugene Cernan, just before he steps up the lunar module ladder to leave the Moon, knealt down to scribble the initials of his daughter in the Moondust. Both the 40th and 45th anniversary Apollo 17 editions have a 42mm case made of stainless steel and feature the Lemania based caliber 1861 movement (Lemania 1873). Both use a sapphire crystal as well. Omega produced 1,972 pieces of the Apollo XVII 45th edition again. You’ll find our hands-on review of this model here.

Which Speedmaster will be Group F’s winner?

Now it’s up to you; please leave your vote below to decide which of the above four Speedmaster models will enter the quarter-finals!

Make sure to vote in the other groups as well, click here.