Omega has a long time partnership with the Emirates Team New Zealand (ETNZ). In 1995, Omega started with the Sir Peter Blake’s American’s Cup campaign and again in 2000. You might remember the Omega Seamaster 300M America’s Cup edition with white gold bezel from that time (see below). Also after Sir Peter Blake’s untimely death in 2001, Omega kept on supporting the ETNZ. 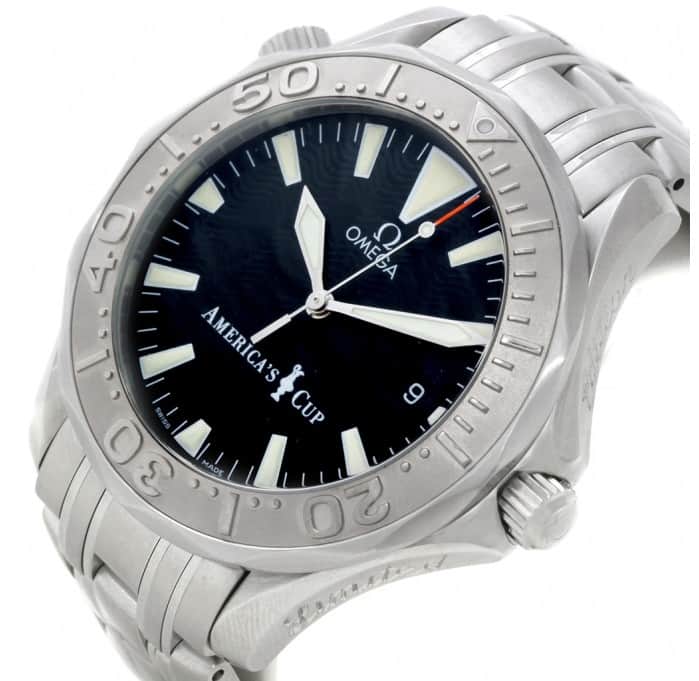 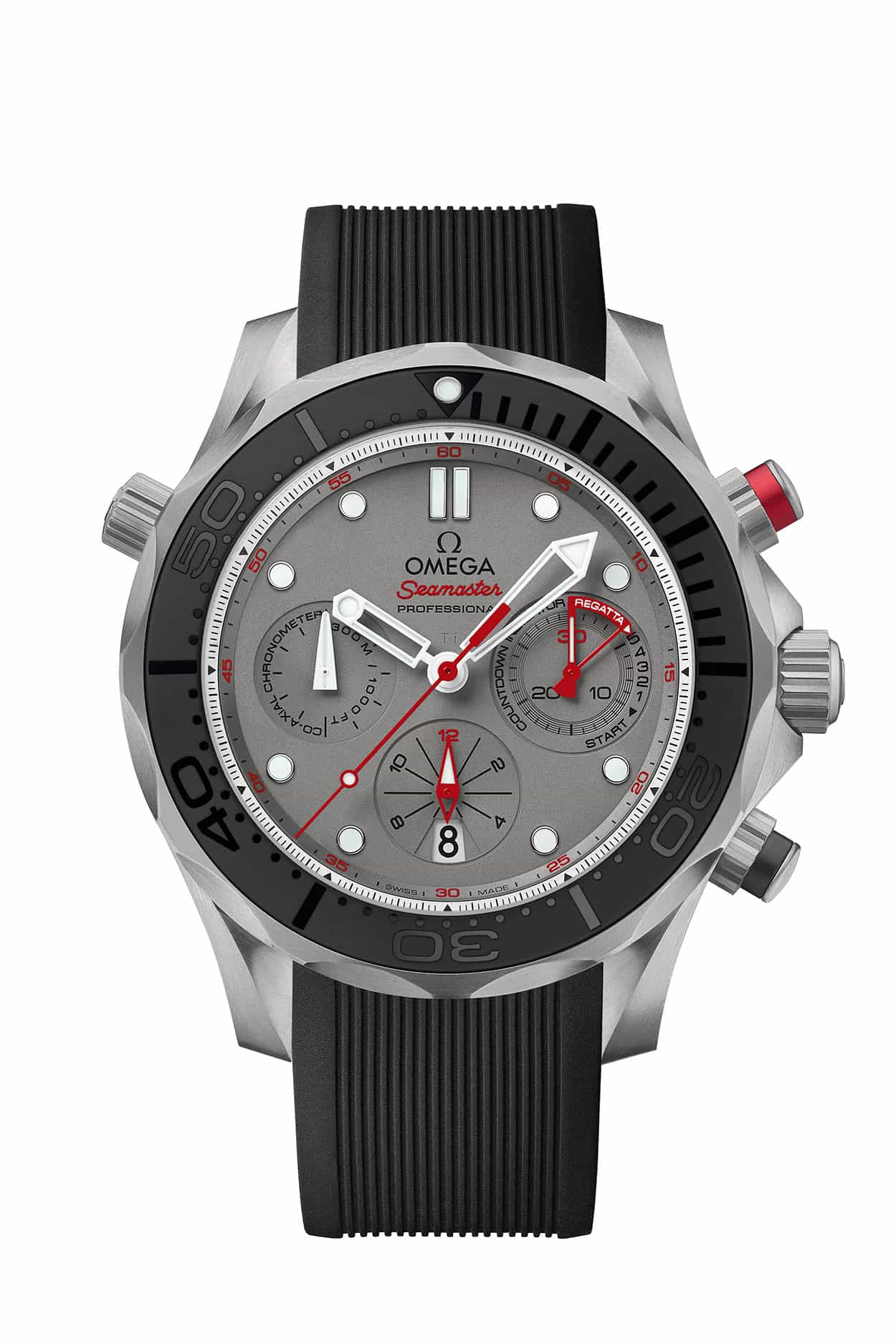 This rugged sports watch has a number of typical Omega Seamaster 300M features, like the unmistakably case shape that Omega uses since 1993, a black ceramic unidirectional rotating bezel and a crown located at 10 o’clock to operate the helium valve. The case is made of Grade-5 titanium and measures 44mm in diameter, a tad bit bigger than the older Seamaster 300M 41.5mm models.

At first I though the dial was made of platinum due to the color and the very fine grain. However, you never know from press images, it is actually made of Grade 5 titanium. Just like the case.

As you can see on the dial of the Seamaster 300M ETNZ , the minute counter at 3 o’clock has a 5-minute indicator for the regatta countdown. A very simple but effective way to start the regatta timer. So, no specific countdown mechanism is needed, just a push on the button and the scale will tell you when the race will start. The hour recorder at 6 o’clock has a neat shaped hand, which resembles one of those sailing flags. 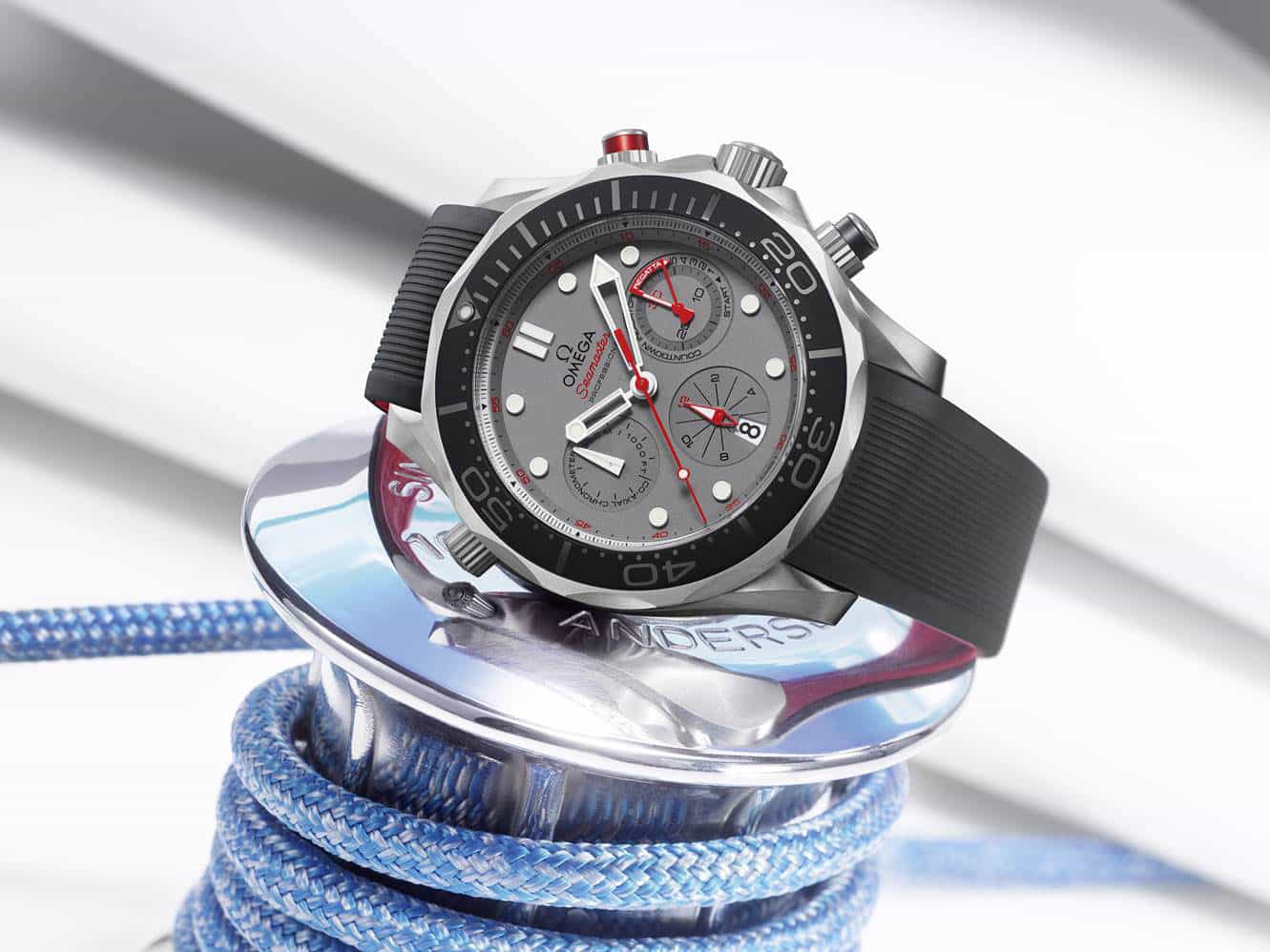 Inside this Omega Seamaster Diver 300M ETNZ is the caliber 3330 movement, featuring the Co-Axial escapement and a Si14 silicon balance spring. The movement is chronometer certified (-4/+6 seconds a day deviation allowed). The caseback doesn’t show the movement but instead has been embossed with the official ETNZ logo.

The Omega Seamaster Diver 300M ETNZ has a retail price of CHF 6500 Swiss Francs and will be delivered this month to the markets.

We already showed you the first model of the Omega Seamaster 300M America’s Cup with the white gold bezel. That one is pretty sought-after right now but can still be found once in a while with an interesting price tag, some times for even lower prices than the original Omega Seamaster 300M ‘Bond’ 2531.80 (we discussed this piece recently here as the ‘Sleeper Watch’). This reference 2533.50.00 Seamaster 300M America’s Cup model was limited to 9999 pieces world wide and introduced in 2000. Sir Peter Blake (skipper of the winning Team New Zealand at the time) was already an Omega ambassador since 1995. 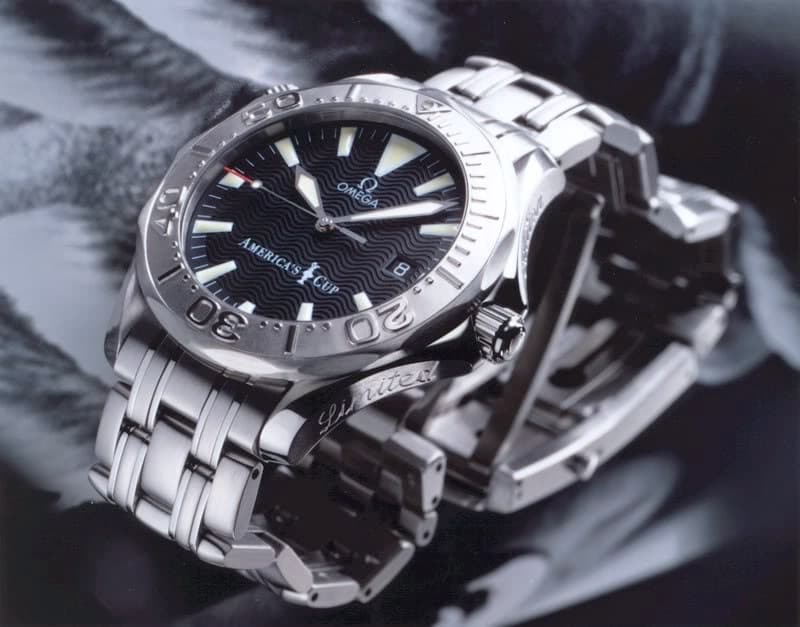 Clearly based on the original Seamaster 300M that was introduced by Omega in 1993, the America’s Cup already had a matching date disc wheel that you see now so often and was engraved in the case band. At that time, the Co-Axial movement was only found in the De Ville model (caliber 2500). This Seamaster 300M was based on the caliber 1120 movement, the same as used in the ‘base’ model 2531.80.

The next Omega Seamaster 300M America’s Cup was introduced in 2002 and was the reference 2594.50, a stainless steel chronograph model (caliber 3303 with column-wheel movement). There was also a titanium model and a titanium/tantalum/gold model. See the image below from Jean-Michael Mala for the all stainless steel version. This model was still more or less based on the original Seamaster 300M Chronograph series, but with an upgraded movement (no longer a Valjoux 7750 in the chronographs) and a Speedmaster-style bracelet. The diameter was also 41.5mm. 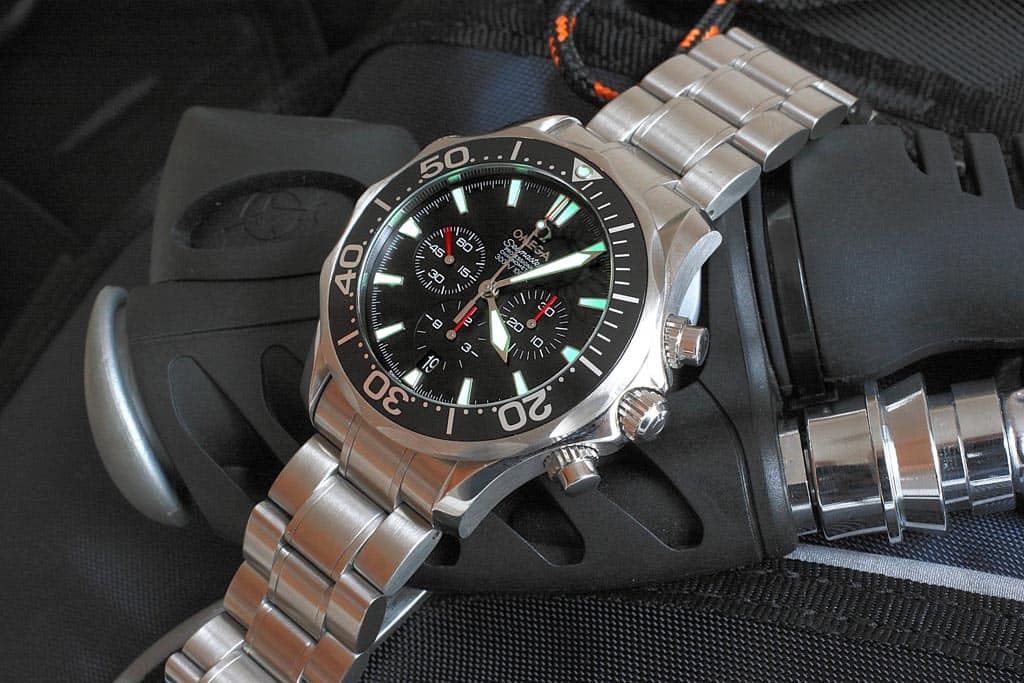 Not long after, Omega introduced the Seamaster Racing Chronometer (click here for the original product page). A watch with a real regatta countdown timer (10 minutes, the preparation signal with blue 5 minute indicators and the starting signal with red 5 minute indicators). This particular watch was co-developed by the Team New Zealand and introduced in 2003/2004. Even though this watch isn’t marked as an America’s Cup watch, it was used in several advertisement stating ‘The America’s Cup Choice’. This model had a caliber 3602A movement and the case measured 44mm. Available in stainless steel with a steel bracelet or with a rubber bracelet and available in titanium with titanium or rubber bracelet. Image below is from the original press release. 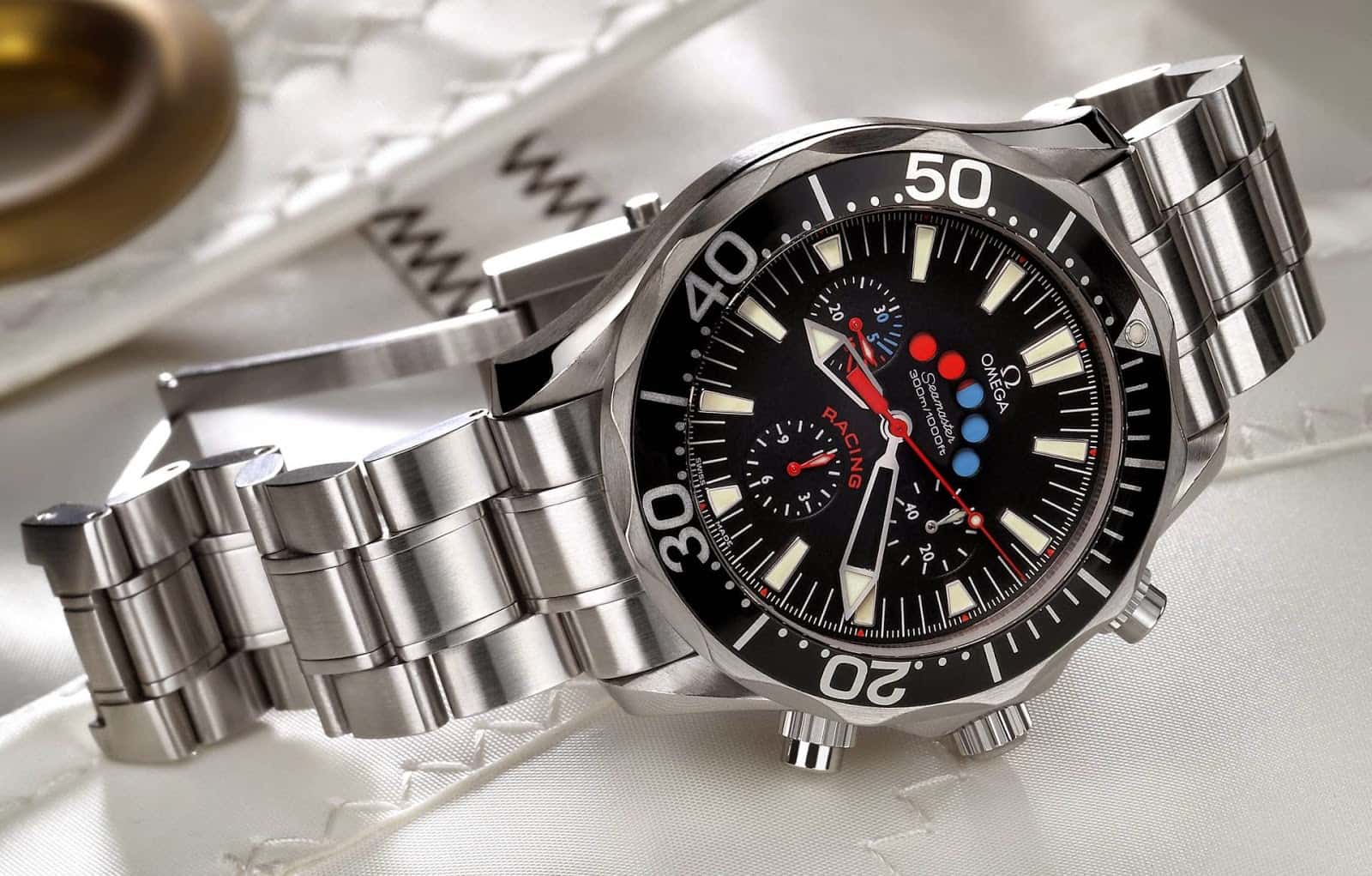 In 2013, Omega introduced the Seamaster Diver 300M ETNZ America’s Cup. Similar to this year’s model, but with a different look. In stainless steel and either with red and black or yellow and black color schemes. Fitted with Omega’s caliber 3330 Co-Axial chronograph movement and limited to 2013 pieces only. The watch came on a stainless steel bracelet and with the rubber strap (as pictured below). This 44mm model is basically identical to this year’s model for the 35th America’s Cup World Series in 2017. 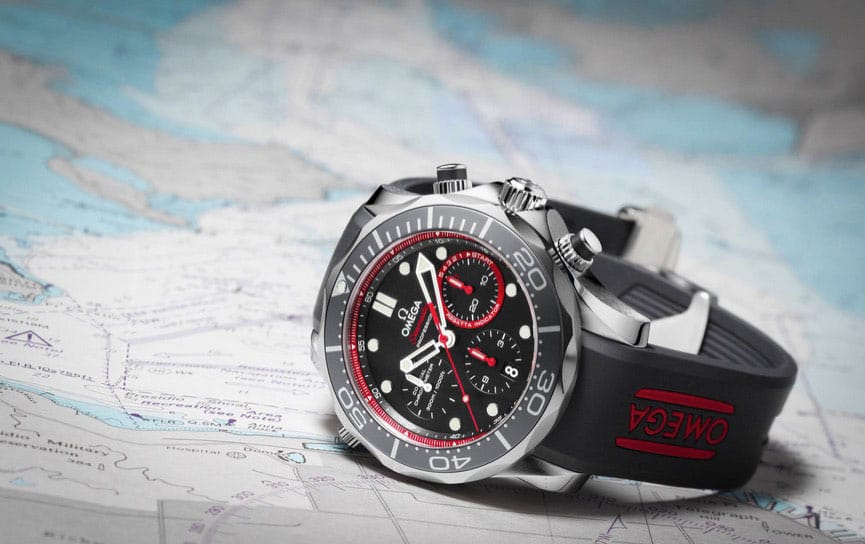 Between 2004 and 2013 there have been ‘sailing’ models in the Seamaster collection, but not specifically addressed as an America’s Cup watch. An interesting overview of Omega’s watches with regatta functionality can be found here.

More information can be found on the Omega ETNZ page.