With the introduction of the hand-wound Oris Big Crown Calibre 473, another important step in the evolution of the long-running Big Crown Pointer Date makes its appearance. The watch also shows Oris’s determination to stand out from a movement perspective once again. The Oris Movement Creation Program outdid itself with the introduction of Calibre 473. The movement, featuring a five-day power reserve, elevated anti-magnetic characteristics, and a 10-year warranty, also has a neat trick up its sleeve in the form of a movement-side power reserve indicator that looks very neat indeed.

The new Oris Big Crown Calibre 473 is a reinvented Big Crown Pointer Date. The recently introduced Big Crown Waldenburgerbahn Limited Edition (€2,100) represents the previous generation. That watch shows the typical coin-edge bezel, and its 40mm case houses the automatic Oris 754 movement. It’s based on the Sellita SW200-1 with a 28,800vph frequency and a 38-hour power reserve. The 2021 Big Crown Pointer Date Calibre 403 (€3,300) is, just like the new Calibre 473, the new generation. These Oris “BCPD” watches feature movements made to the exact specifications of the brand. Oris takes care of the engineering concept, finances tooling development and prototyping, leaves the manufacturing to third parties, and shares assembly. That results in a higher-priced movement than a Sellita-based one, but for the extra money, you get more mechanical uniqueness and beauty. And Calibre 473 is the best-looking one so far. 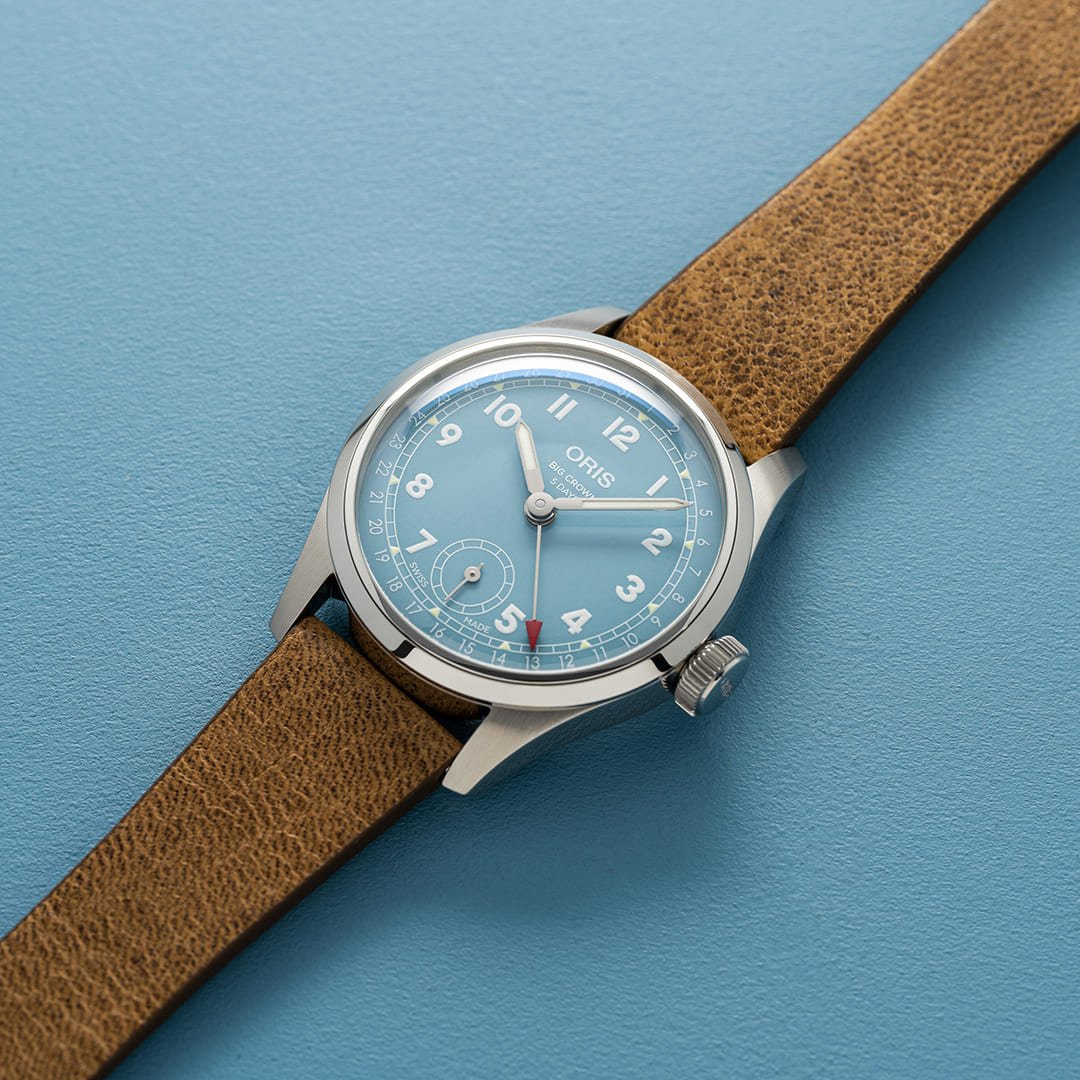 The hand-wound Oris Big Crown Calibre 473 — Smooth, not edgy, but every inch a BCPD

One thing immediately sets a Sellita-equipped Big Crown apart from an in-house conceived one — the bezel. Swiss designer Lukas Bühlmann, who has been working at Oris for seven years, made a risky decision in outfitting the new-generation Big Crowns with a smooth bezel instead of the characteristic coin-edged one. But I think he did a good job. Not only does it work aesthetically, but it also distinguishes the Sellita-powered models from their evolved counterparts.

The oversized crown, which can be operated with a gloved hand, stayed, and so did the central hand that points to a date scale around the edge of the dial. And because that stayed the same, the smooth new Oris Big Crown Calibre 473 looks every inch a BCPD. Yes, this is true even if the central seconds hand was replaced by a small seconds sub-dial at 6 o’clock. 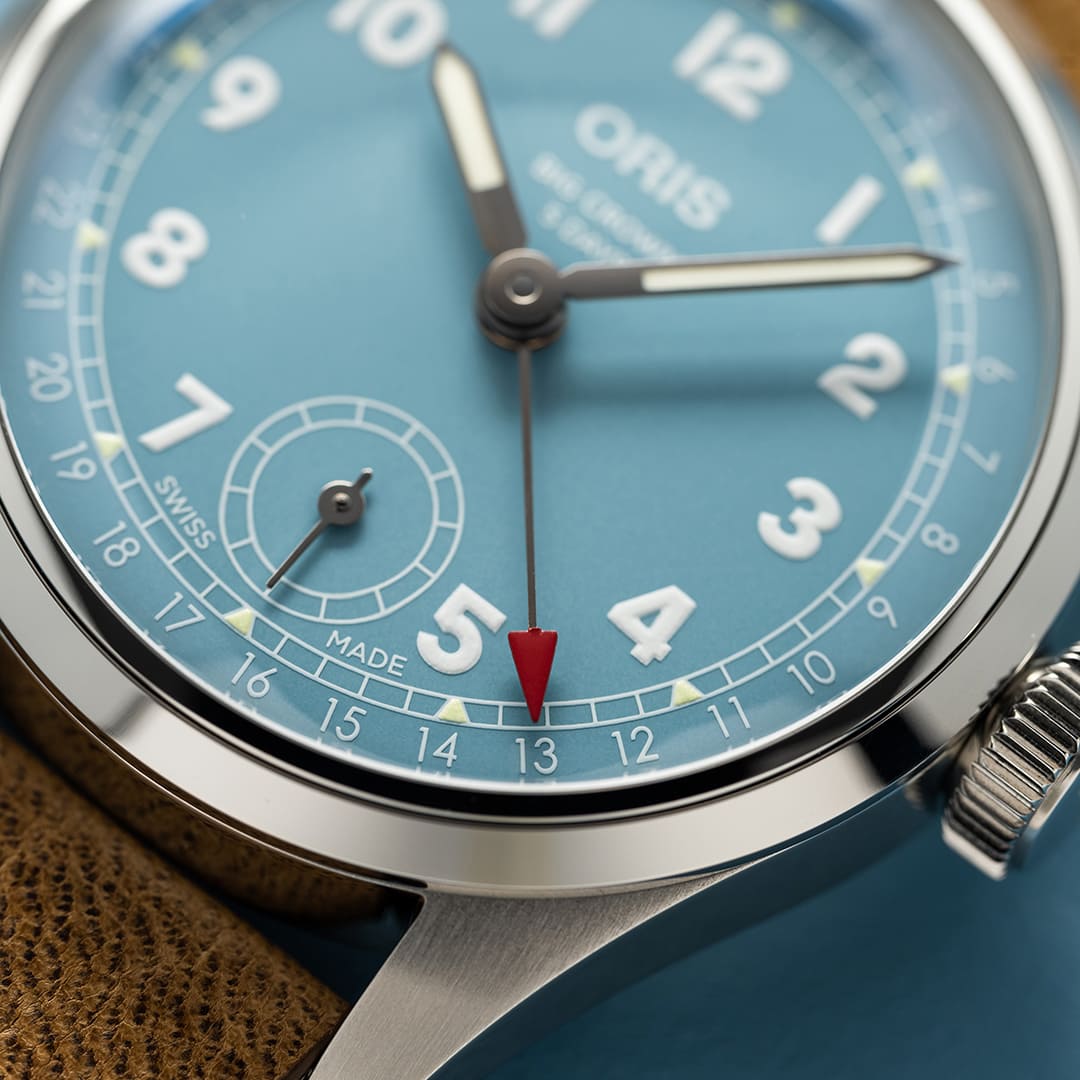 Different, but the same

For some, including me, having four central hands is a nice touch. But despite the new dial layout with small seconds, the newest versions of the BCPD are unmistakably BCPD watches. And that’s quite an achievement, especially when you pay closer attention and notice that the cathedral hands have been replaced with pencil hands. Furthermore, the pointer-date hand with its crescent-shaped tip returned to its more original arrow shape of many moons ago — it still does the same thing but does so with a different shape. These little changes make a big difference, but in the end, they don’t harm the charm and typical looks of the BCPD. But the best is yet to come in the case of the new Big Crown Calibre 473, and that’s the movement that shows itself proudly behind a transparent case back.

The hand-wound Calibre 473 has, just like every movement in the Calibre 400 Series, elevated levels of magnetism resistance, a five-day power reserve, and a 10-year warranty (join MyOris to extend your warranty to 10 years). It’s also accurate to +5/-3 seconds a day — which would comfortably pass chronometer tests —and has 10-year recommended service intervals. 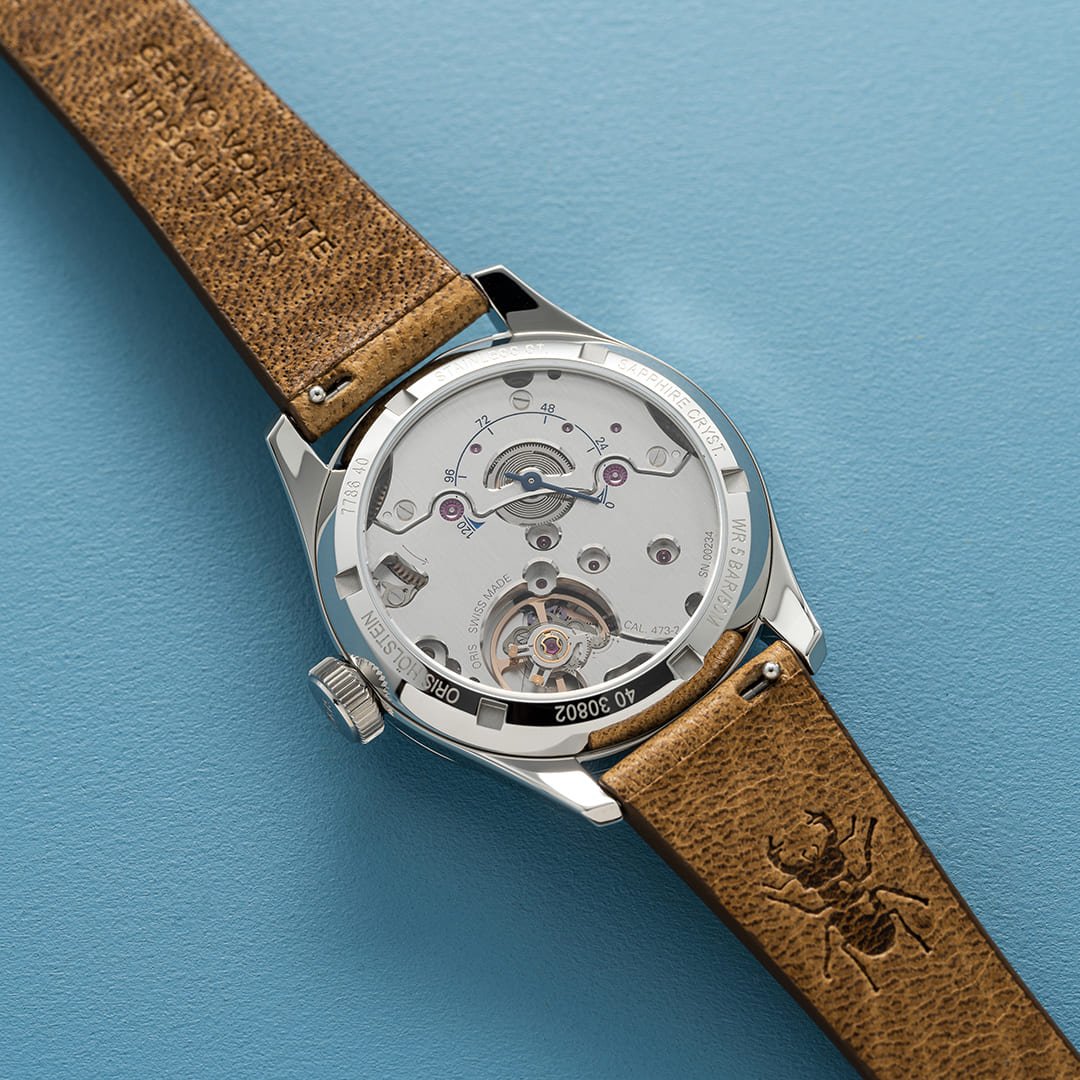 Out with the rotor, in with the power reserve

The new Big Crown Calibre 473 houses a movement built on the same base as the automatic Calibre 403. As such, you get hands for the hours, minutes, small seconds, and the pointer date. It also revives an important complication for Oris, the power reserve indicator. Oris developed a 120-hour power reserve indicator that sits not on the dial, but on the back of Calibre 473. It’s not only a useful function that clearly shows when it’s time to take action, but it’s also developed with practicality, simplicity, and durability in mind. On top of that, the power reserve indicator looks very appealing. It’s well-integrated into the look of the rotor-less movement and adds a touch of technicity. The patent-pending indicator is simple to produce and assemble, and it is extremely durable — everything you want from an Oris. 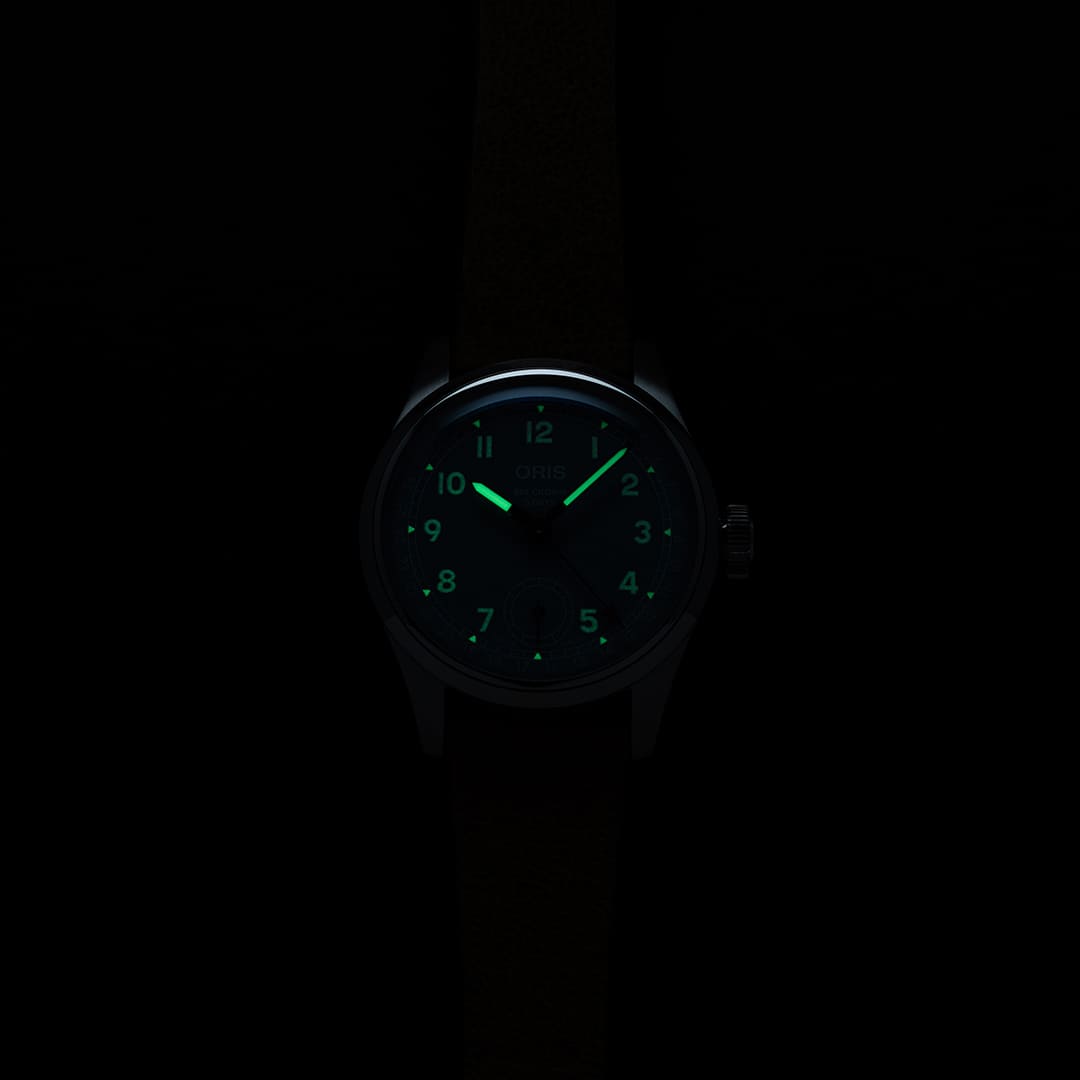 Clearly, Oris has listened to the call for smaller watches. The multi-piece steel case of the Big Crown Calibre 473 measures a traditional 38mm in diameter. Because of the shiny, smooth bezel, the watch appears slightly bigger. Also, the light blue dial with Arabic numerals, triangular indices, and hands treated with Super-LumiNova create a light and open look. The domed sapphire glass with an anti-reflective coating on both sides allows a clear view of the nicely detailed dial with just one red accent to catch the eye (and the date). Because of the screw-down case back, the watch is water-resistant to 5 bar.

The olive-brown strap, crafted from sustainably sourced deer leather, is made by Oris’s Swiss partner Cervo Volante. The stainless steel butterfly clasp with a fine-adjustment system is new. It allows adjustment as your wrist expands and contracts, which happens as environmental conditions change. 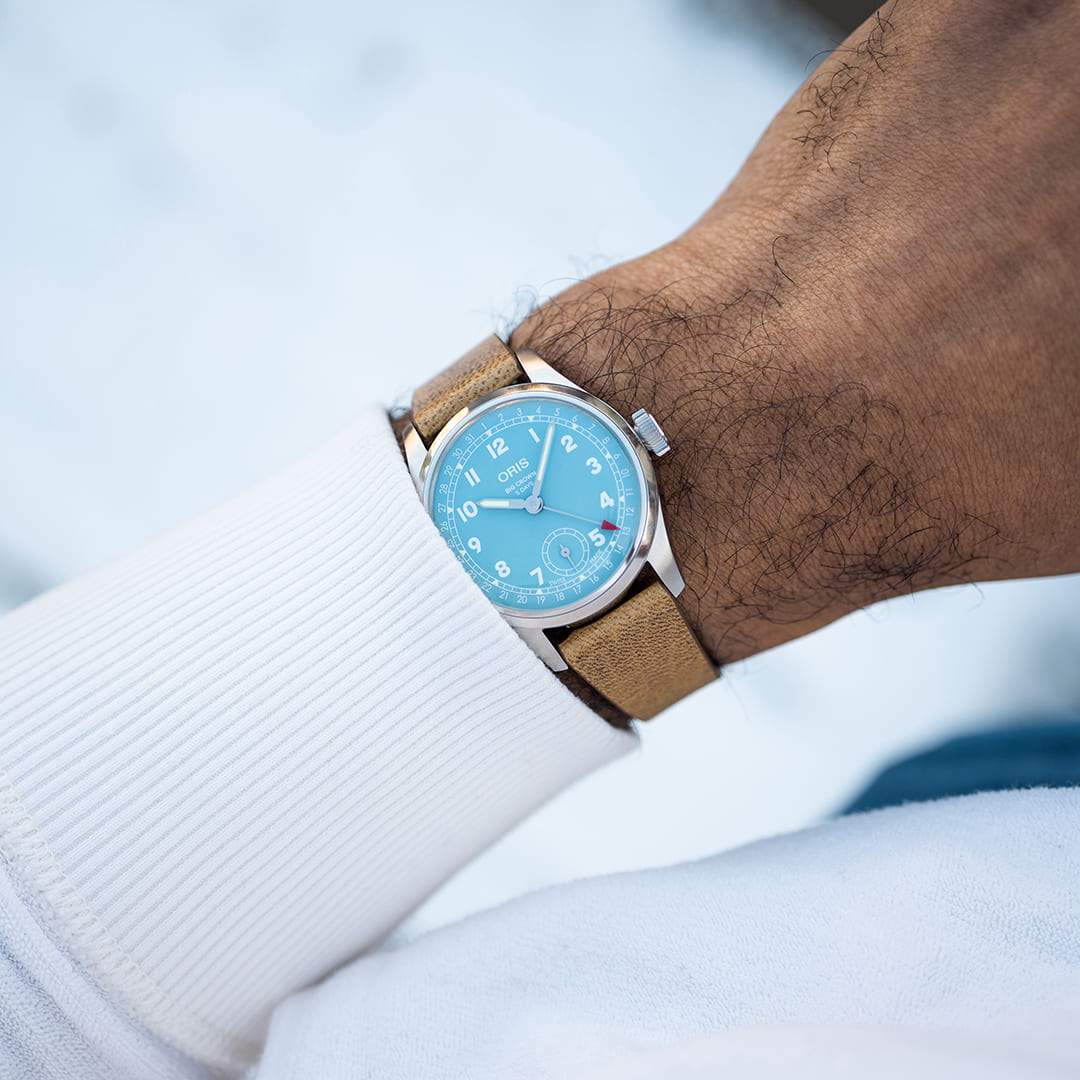 Price and availability of the Oris Big Crown Calibre 473

The hand-wound Oris Big Crown Calibre 473 will become available this month. It has a Swiss retail price of CHF 4,200. That’s twice the price of a Sellita-equipped BCPD and CHF 1,100 more expensive than the automatic Big Crown Pointer Date Calibre 403. Losing the rotor and adding a power reserve indicator costs quite a bit of cash. I do think the more purist Calibre 473 is the nicer watch, but it takes real and deep love for hand-wound movements to overcome the price difference, I believe. Yes, the new movement took four years to develop, and yes, it looks the part, but it will cost you.

More information about the Big Crown Pointer Date Calibre 473 and Oris can be found on the brand’s official website.