Blue Monday is not just any Monday. In fact, it’s the third Monday in January. UK travel company Sky Travel characterized that particular Monday as the most depressing day of the year. And according to the company, the remedy would be a trip to a sunny destination, of course. But playing the 1983 song “Blue Monday” by New Order always worked for me to turn a dispirited, gloomy Monday into an energetic one. Wearing the right blue jeans also does the trick for me, especially when I can have double-denim joy with the Oris × Momotaro Divers Sixty-Five Special Edition. I didn’t want to wait until Denim Day, the last Wednesday of April, to write about my special-edition Divers Sixty-Five. And that’s why I hereby declare the fourth Monday of November Blue Jeans Day. Talk about it in the coffee corner, and spread the word!

The Oris × Momotaro Divers Sixty-Five Special Edition was a spring 2020 release, but it took me two and a half years to get one. That’s because looking at the watch on a computer or phone screen didn’t turn me on. I remember being enthusiastic when the watch was released because my favorite pair of blue jeans is made by the Japanese brand Momotaro. Still, in the pics, the combination of a sea-green dial, a black bezel with a bronze outer ring, and a denim strap with the two characteristic white Momotaro stripes seemed off and even a bit awkward. Boy, did I misjudge that watch! 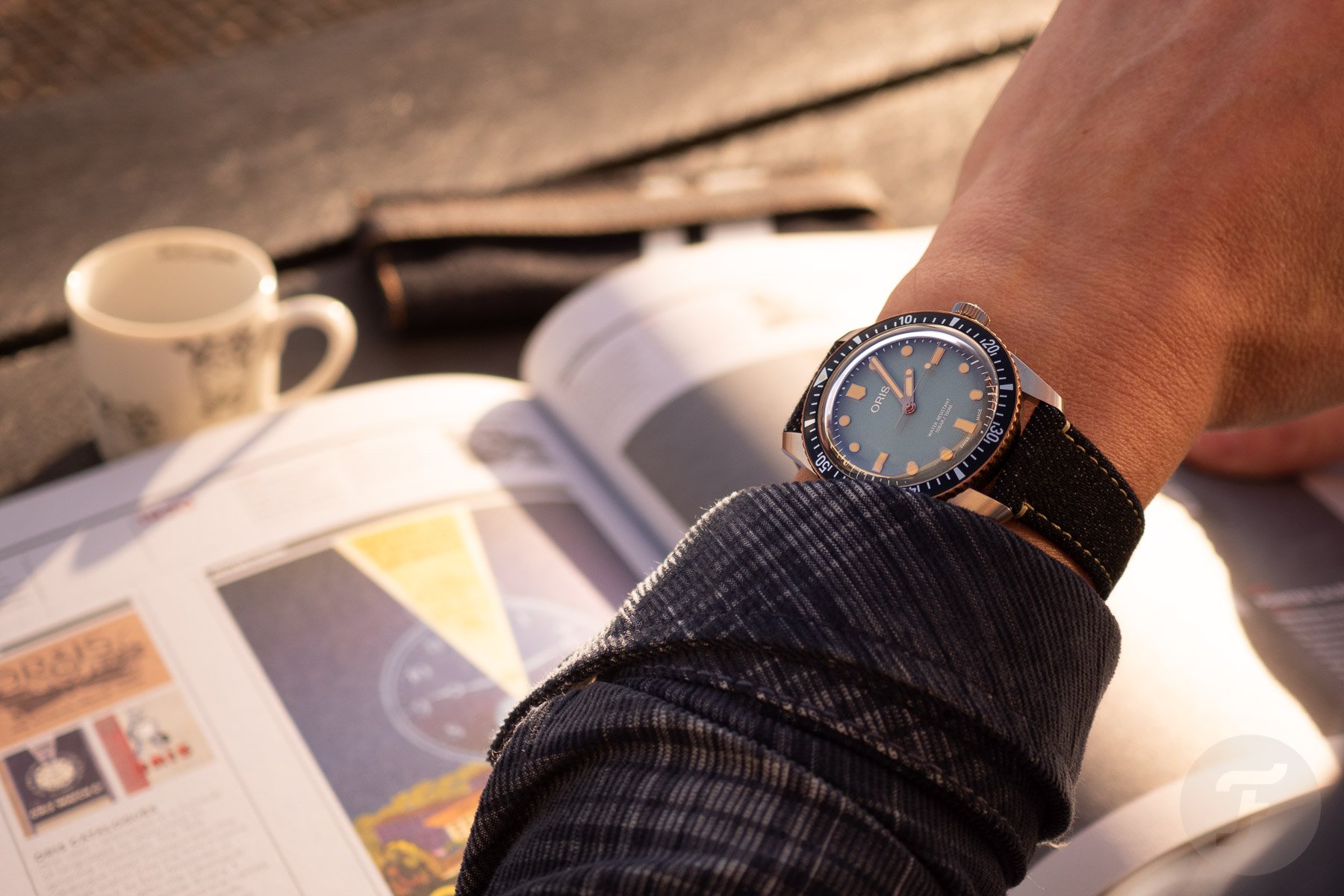 The Oris × Momotaro Divers Sixty-Five disappeared from my radar for a long time, but last year, completely unexpectedly, I came eye to eye with one at Fratello HQ. I had experienced watch love at first sight before. When Gerard showed me a picture that he took of the Grand Seiko Tough Quartz SBGX341, I was instantly smitten. I basically bought that watch based on the picture. The Oris, on the other hand, was one that I had to see in reality. But once I did, and especially after putting it on my wrist, I wanted that watch in my life. In the metal, the slightly odd pairing of steel and a touch of bronze looks luxuriously instrumental. And the combination of almost-pastel sea green and the dark blue color of raw denim with white stripes also just worked. What a surprise. 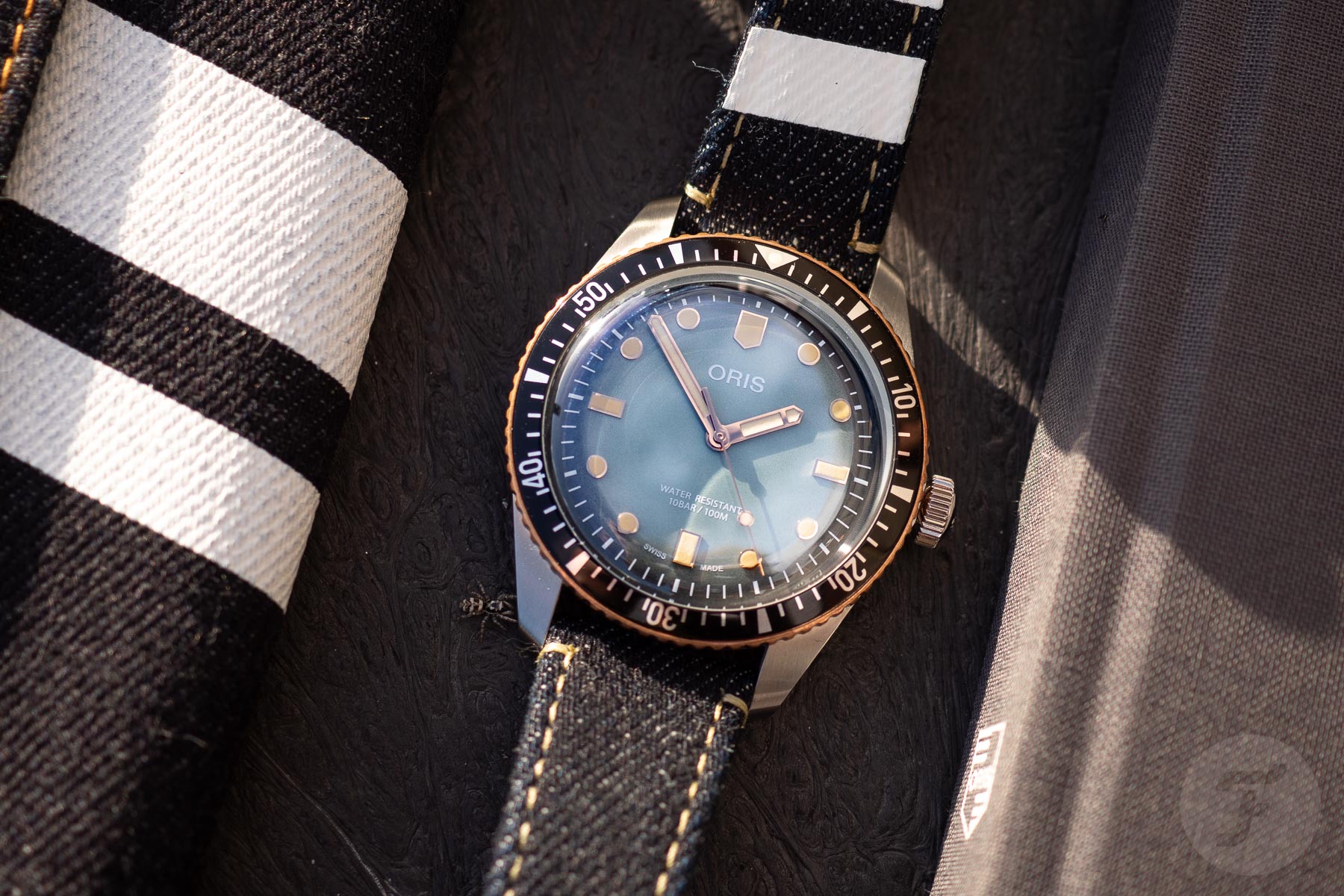 A collaboration that worked out just fine

What you should know about the discontinued Oris × Momotaro Divers Sixty-Five Special Edition is that it was not a limited edition. There was no cap on the production quantity, only on the amount of time that the brand wanted to spend making it. The watch started life as a Divers Sixty-Five with a 4Hz caliber Oris 733 based on a Sellita SW200-1 inside the steel 40 × 47 × 13mm case. There was no Calibre 400 inside, so the price of this watch was an agreeable €2,000. This is the type of watch that doesn’t need an in-house movement to shine. In this case, it’s all about the looks, the result of a collaboration that worked out just fine.

I heard a story about an Oris guy buying a pair of Momotaro jeans and that the purchase led to a collaboration. There’s also the version of Oris CEO and denim fan Rolf Studer meeting Momotaro CEO Katsu Manabe in Japan and how that eventually led to a collaboration. Hell, even if it was a marketing or PR agency that brought the Swiss and the Japanese brands together, I don’t mind. In the end, it’s about the final product. And the final product is what you wear on your wrist, with joy in this case. 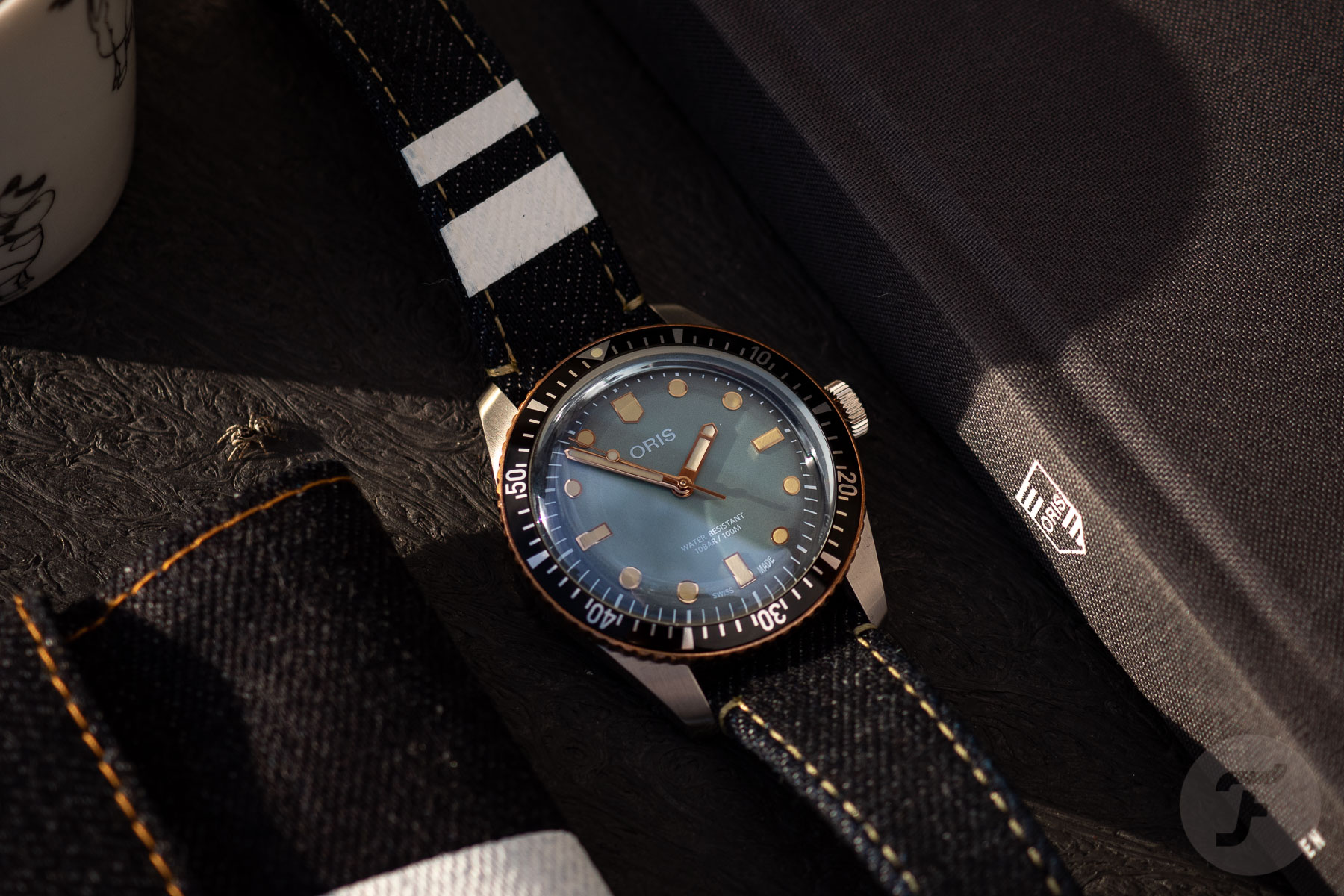 Since you’re on a specialized watch website, I won’t bother you with the story of Oris. I will also not touch upon the history of the Divers Sixty-Five today. Please find out all about the classic diver by clicking here, and you will see a plethora of models and all there is to know about them. But maybe it is a good idea to introduce Momotaro.

Back in the 1960s, the youth of Japan wanted to wear the American blue jeans they got to see in Hollywood movies. It’s not that there wasn’t any Japanese denim, but the quality just didn’t match the American-made fabric. Two decades would pass before the denim makers in the Kojima district of Okayama started to use ring-spun and rope-dyed denim that equaled the quality of American denim. In the 1980s, the Japan Blue Company was created, and under it, Momotaro. The latter debuted as a brand in 2005. 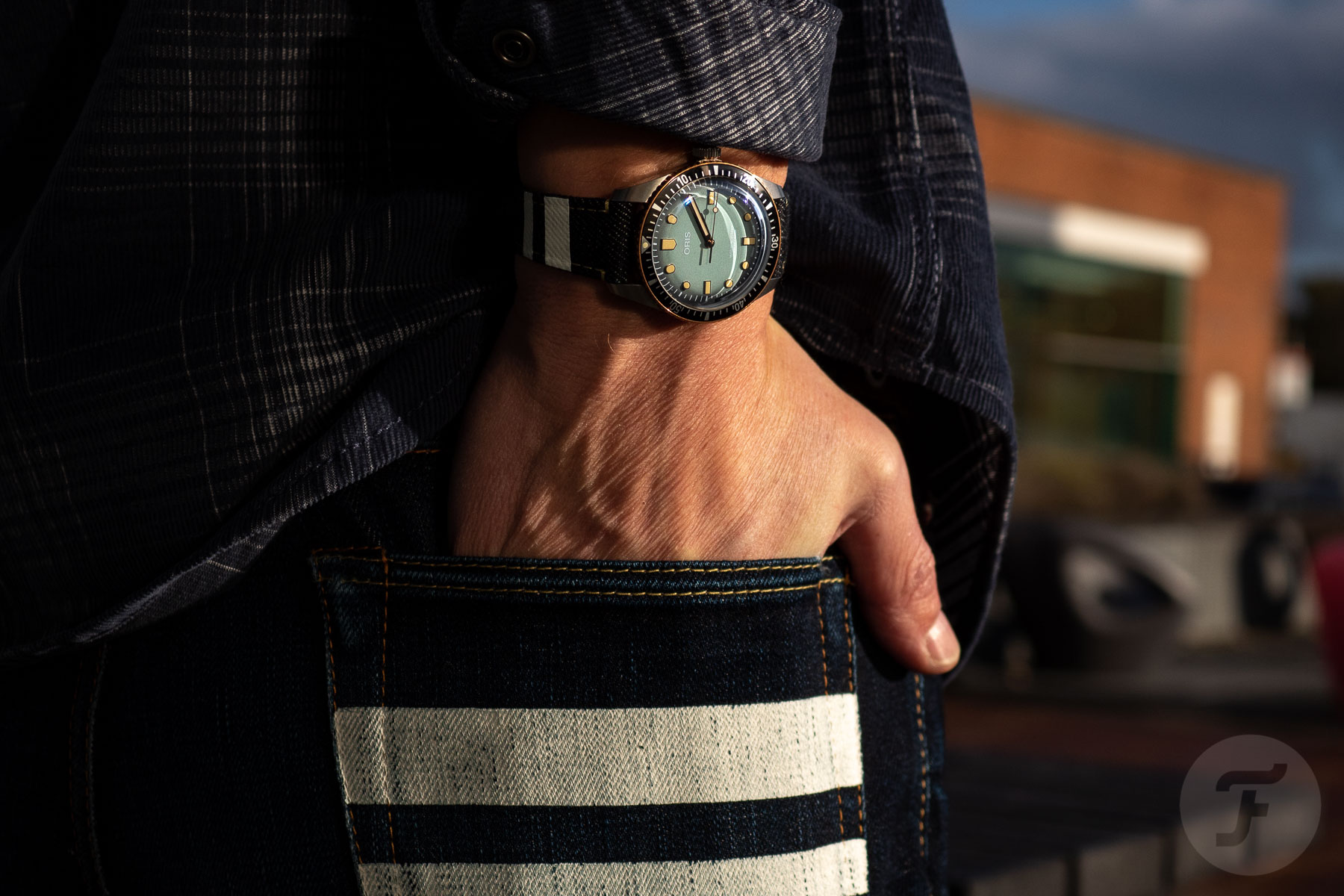 The name Momotaro stems from Japanese folklore. Momotaro, according to Japanese legend, is the name of a small boy born from a giant peach who descends to Earth to be the son of an elderly couple. The peach boy rejuvenated the old couple, made them feel young again, and encouraged them to follow their dreams. Momotaro also fought off a band of ogres terrorizing the village that he lived in. And his “peachy” origin and that ogre story explain the pink selvedge and inseam of a pair of Momotaro jeans. The pink represents the peach, and Momotaro’s signature battle stripes are an homage to the war flag that the boy carried into battle. Other nice details are the leather patch and rivets that bear a picture of the peach boy. 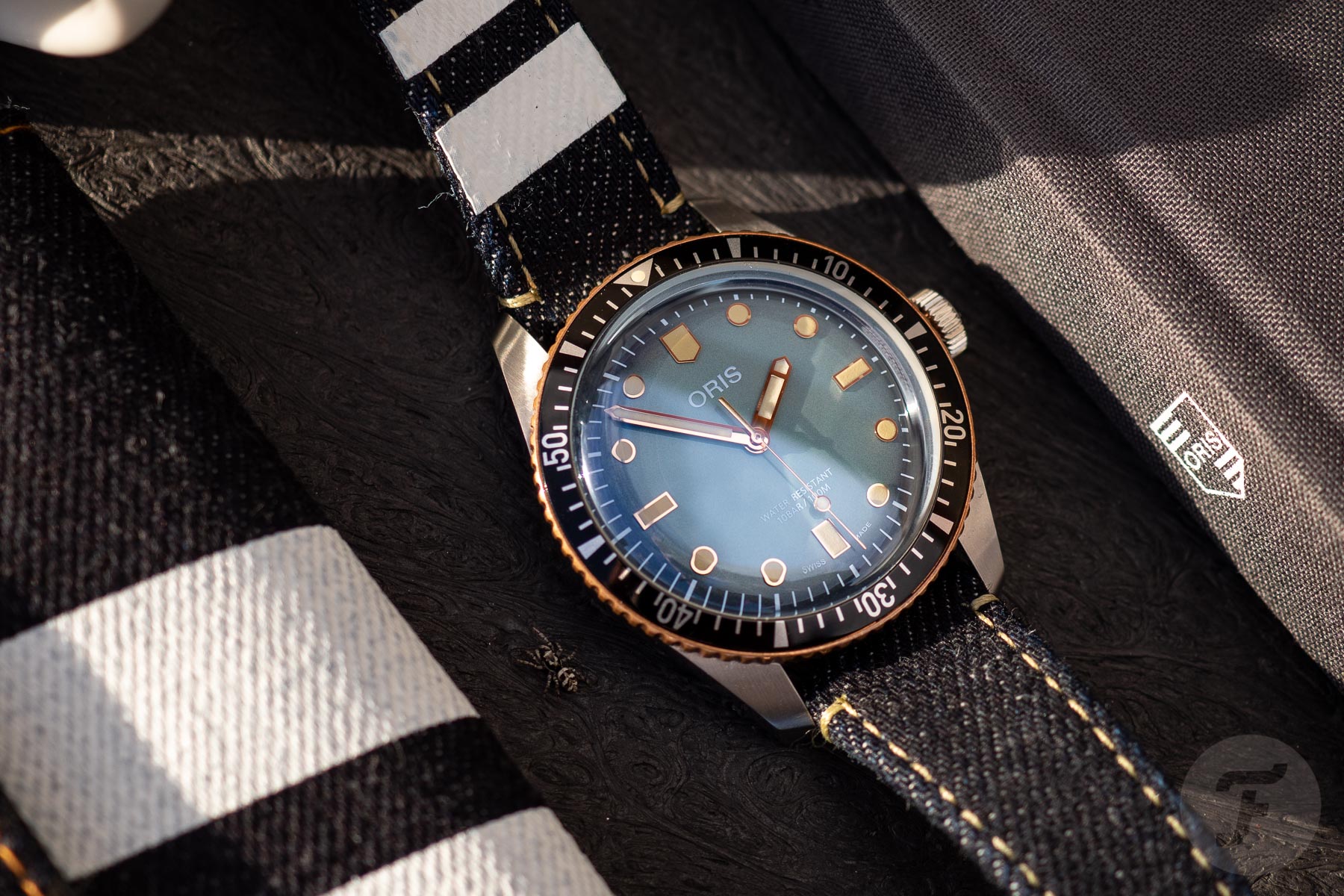 In the Momotaro production facilities in the Kojima district, the brand makes denim constructed from 100% Zimbabwean cotton. This type of cotton is famous for its quality, durability, unique fading characteristics, and ability to hold indigo dye. All Momotaro jeans are handmade and embody attention to detail and the quest for perfect quality — values that resemble those of high-end watch brands like Oris. 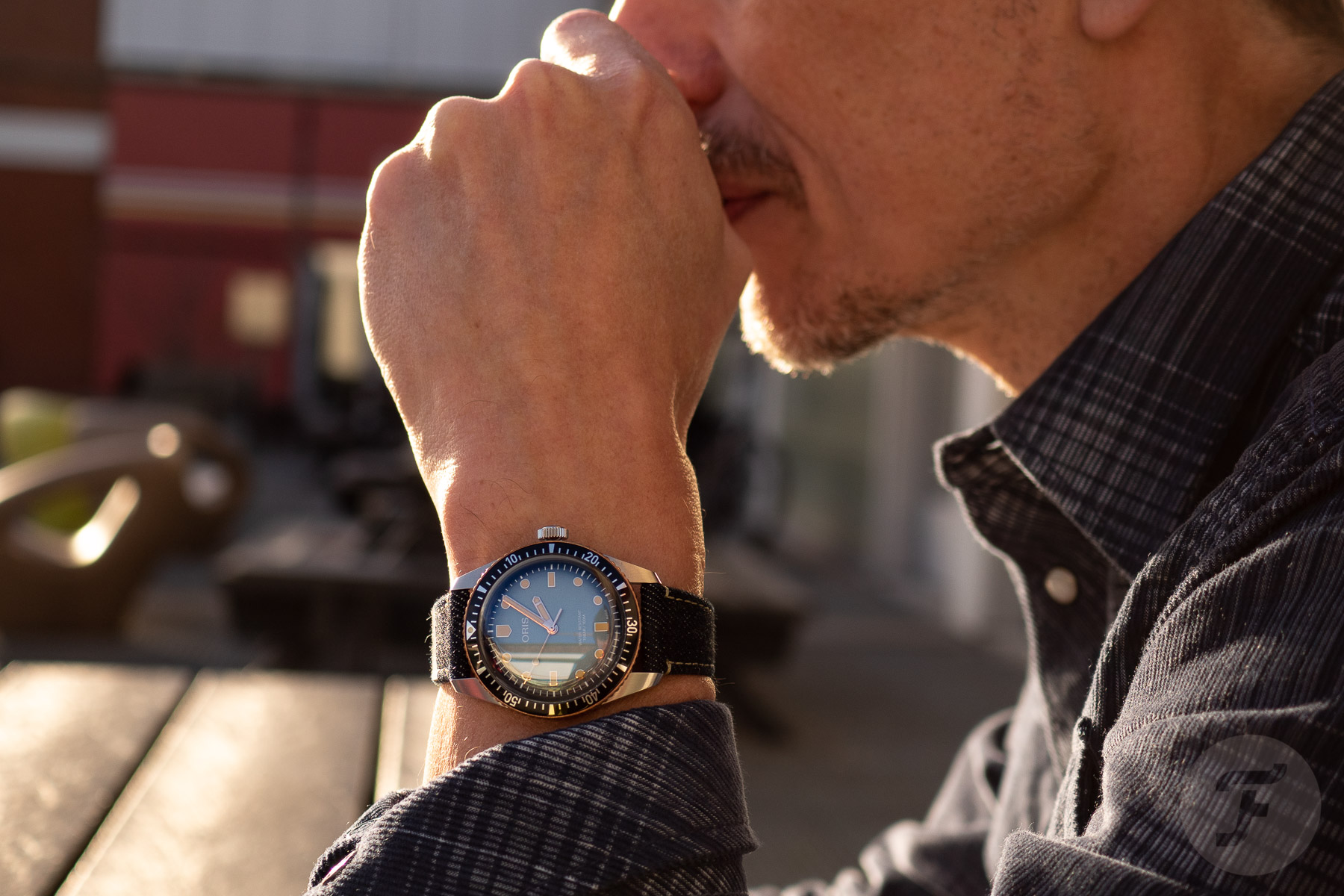 Why I love the Oris × Momotaro Divers Sixty-Five

It’s actually quite simple to explain why I love this watch. I could tell you about the applied bronze indexes with creamy Super-LumiNova, creating a vibe that’s borderline faux patina while staying just on the right side of it. Maybe it’s because the beige indexes are placed on a mysteriously greenish dial that it doesn’t look like it’s trying too hard to be vintage. The combination of the steel case and the bronze bezel is another highlight and possible answer. And so is the quality, look, and comfort of the dark blue denim strap with its leather insert and lining.

But in the end, it’s all about the combination of details. The Oris × Momotaro Divers Sixty-Five Special Edition is greater than the sum of its parts. And when I say parts, I also mean the cool denim pouch with battle stripes that the watch comes in. Oh, and the denim warranty card holder that could also double as a business or credit card holder. And when you combine the watch with a pair of Momotaro jeans — any other denim also works, of course, but please make it selvedge — everything falls into place. Is this too much of a fashion-orientated approach for Fratello? Maybe it is, but in the end, a watch is also a piece of jewelry. It’s something you wear because you want to look and feel good. And the Oris × Momotaro Divers Sixty-Five sure delivers on that. Also, it’s just perfect for the newly established Blue Jeans Day. 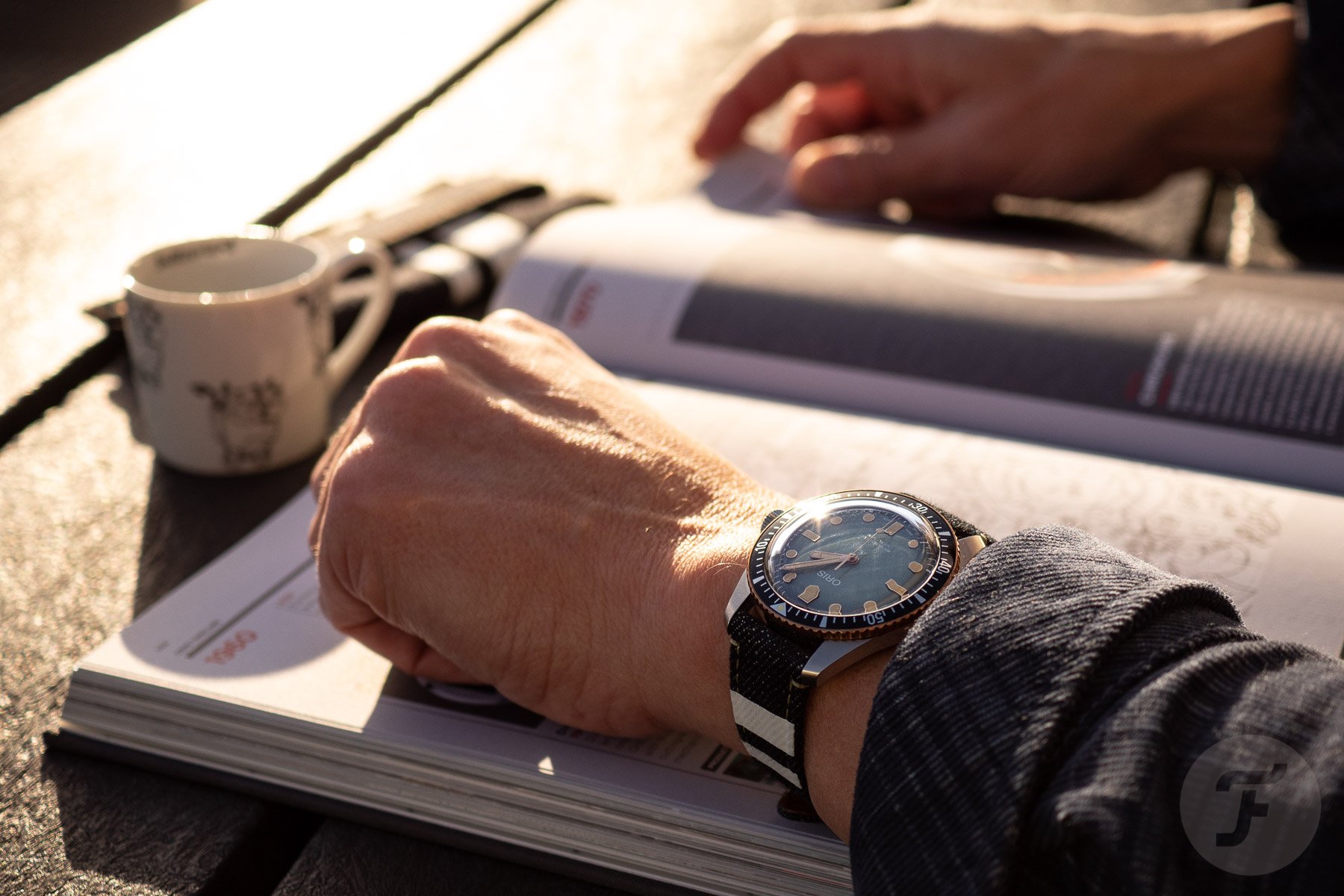 The Oris × Momotaro Divers Sixty-Five Special Edition is no longer in the Oris collection. At the time of publishing, though, a quick search on Chrono24 produced 22 results. If you want to check out the current collection, please go to the official Oris website for more info. And for information about Momotaro, you can click right here.

Enjoy a coffee, discuss fashion and watches, and have yourselves a great week. Also, find and follow me at Lex Stolk • Instagram.