I’m trying hard to follow Sébastien Reichenbach (33) on a descent. The former Swiss champion was French cycling hope Thibaut Pinot’s trusted lieutenant, but now Reichenbach is with the Tudor Pro Cycling Team as a captain. He descends smoothly and fluidly, seemingly without touching the brakes. It would be foolish to think I can do the same, so the distance between us grows steadily. How did I get here? Well, the Tudor Pro Cycling Team has invited a small group of journalists to learn about the motivation, philosophy, and goals of Tudor Pro Cycling and to meet and talk to the riders and staff as well. That’s why I’m in Altea, Spain. I’m riding a Swiss bike with Swiss wheels while wearing Swiss kit that shows a Swiss sponsor. And the team is wearing a Swiss-made Tudor Black Bay Chrono that’s exclusive to the squad. It’s Swissness on wheels.

“Lex, come have a look,” Fabian Cancellara (41) says while pointing at a bike on top of the Tudor Pro Cycling team car. Dressed in the team kit made by Assos, a Swiss cycling brand that makes high-quality apparel, I walk over in my cycling shoes to take a look at the black Swiss-made BMC Teammachine SLR bike that the former multiple classics winner, four-time world and two-time Olympic champion is standing next to. “You see this?” the owner of the 20-strong squad that will compete at the UCI’s Proteam level asks me while pointing at the subtle writing on the downtube of the bike. “Mpc stands for ‘masterpiece.’ This bike is very much like a high-end luxury watch. It’s a mix of functional art and technical innovation.” 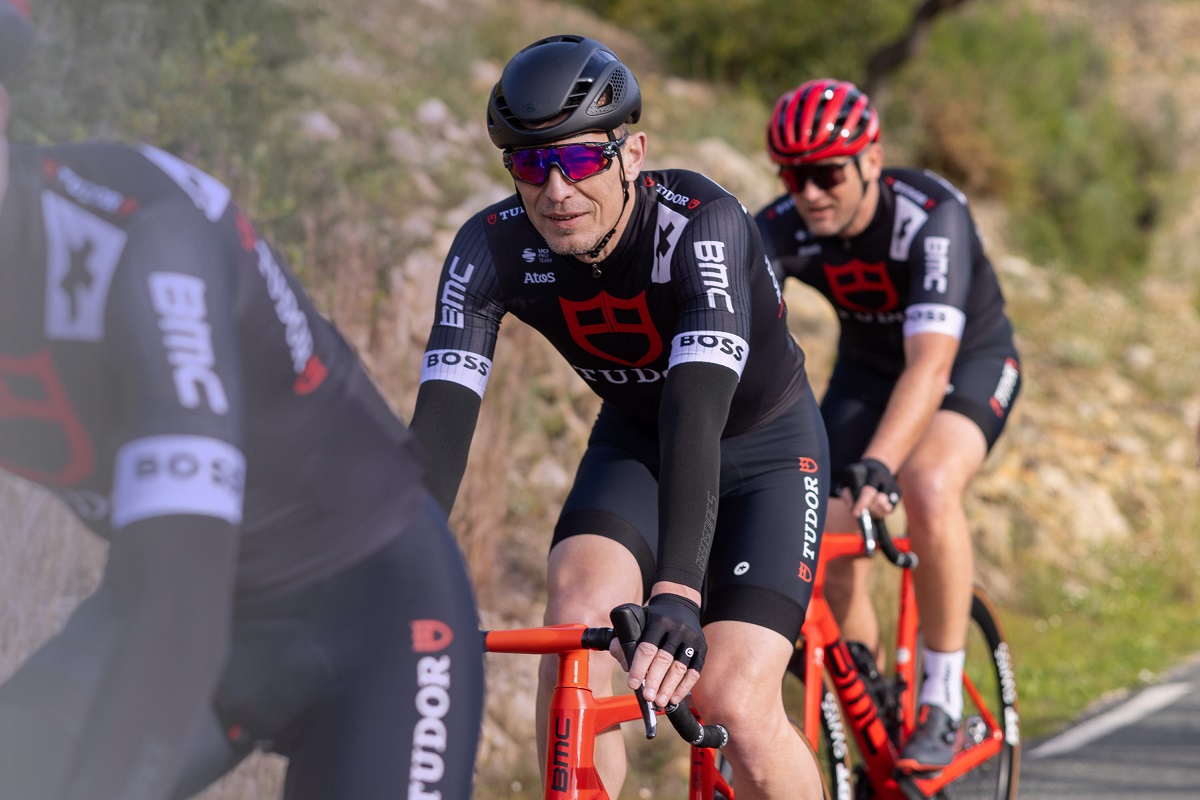 Cancellara does have a point when he compares this specific handmade BMC bike frame to a mechanical luxury watch. Both the watch and the bike have a functional heritage that, through evolution, has remained relevant to this day. And on top of that, there’s a luxurious layer that’s all about emotion. To enrich the instrumental foundation of both objects, there’s a special decorative finishing, the production numbers are limited, and using either the watch or the bike will result in looks of either recognition or envy from your peers.

“Because they’re handmade, there’s not a lot of these special BMCs available,” Cancellara continues talking about the stealthy black bike that has polarizing white Schwalbe Pro One × Spartacus tires, named after the champ’s very applicable nickname. “The carbon fiber frame is completely handcrafted, and not only is it very light and technically advanced, but it’s also very beautiful. It may appear completely black, but you can see the structure of the carbon when the light hits the frame, and the logos and lettering are also done very tastefully. It’s just pure class. And very exclusive in every sense. The Teammachine SLR Mpc frame module costs €12,000, and for that money, you also get a VIP tour of the BMC headquarters in Grenchen and a test ride with one of the staff members. It’s all about the experience.” 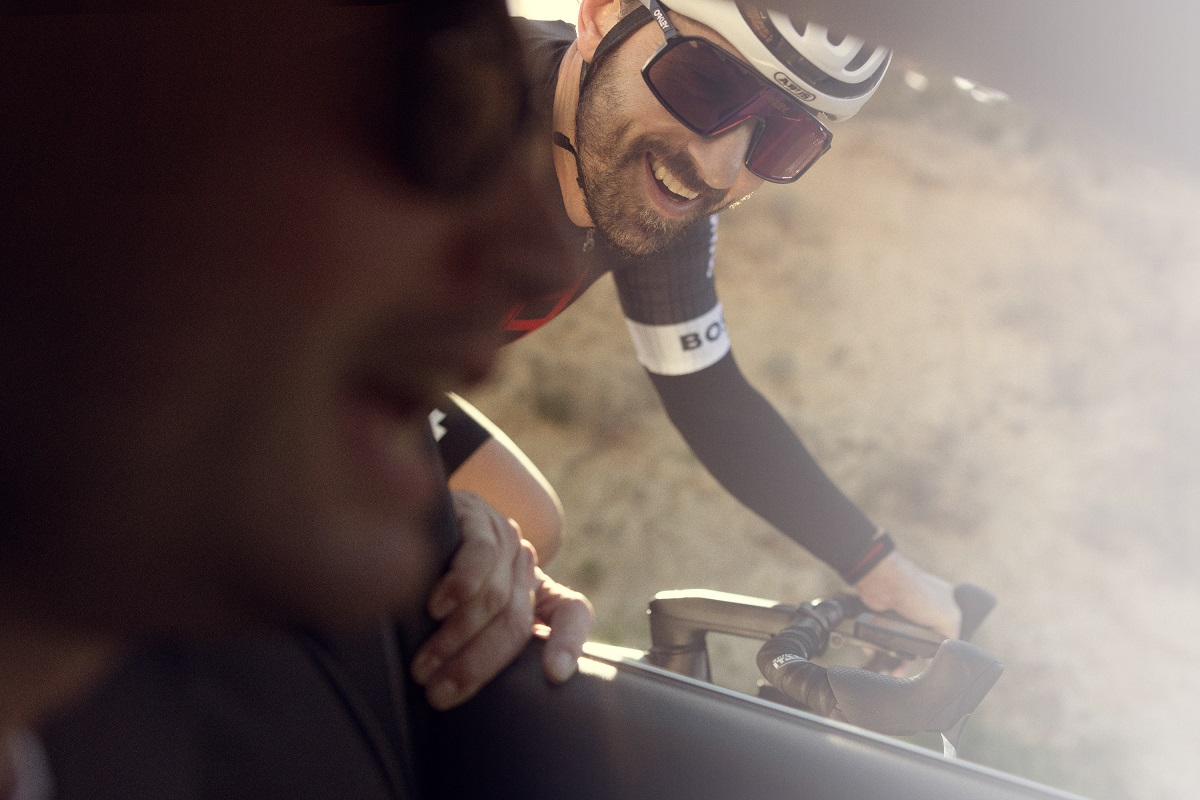 Fabian Cancellara, the founder and owner of the Tudor Pro Cycling Team

The Tudor Black Bay Chrono team watch you can’t have

So you can buy the bike that Cancellara is riding. After building up the frame with the high-end group set and wheels of your liking, the total amount will easily reach €20,000. To put this into watch perspective, that’s over €12,000 more than you’ll pay for a Black Bay Chrono S&G on a bracelet. 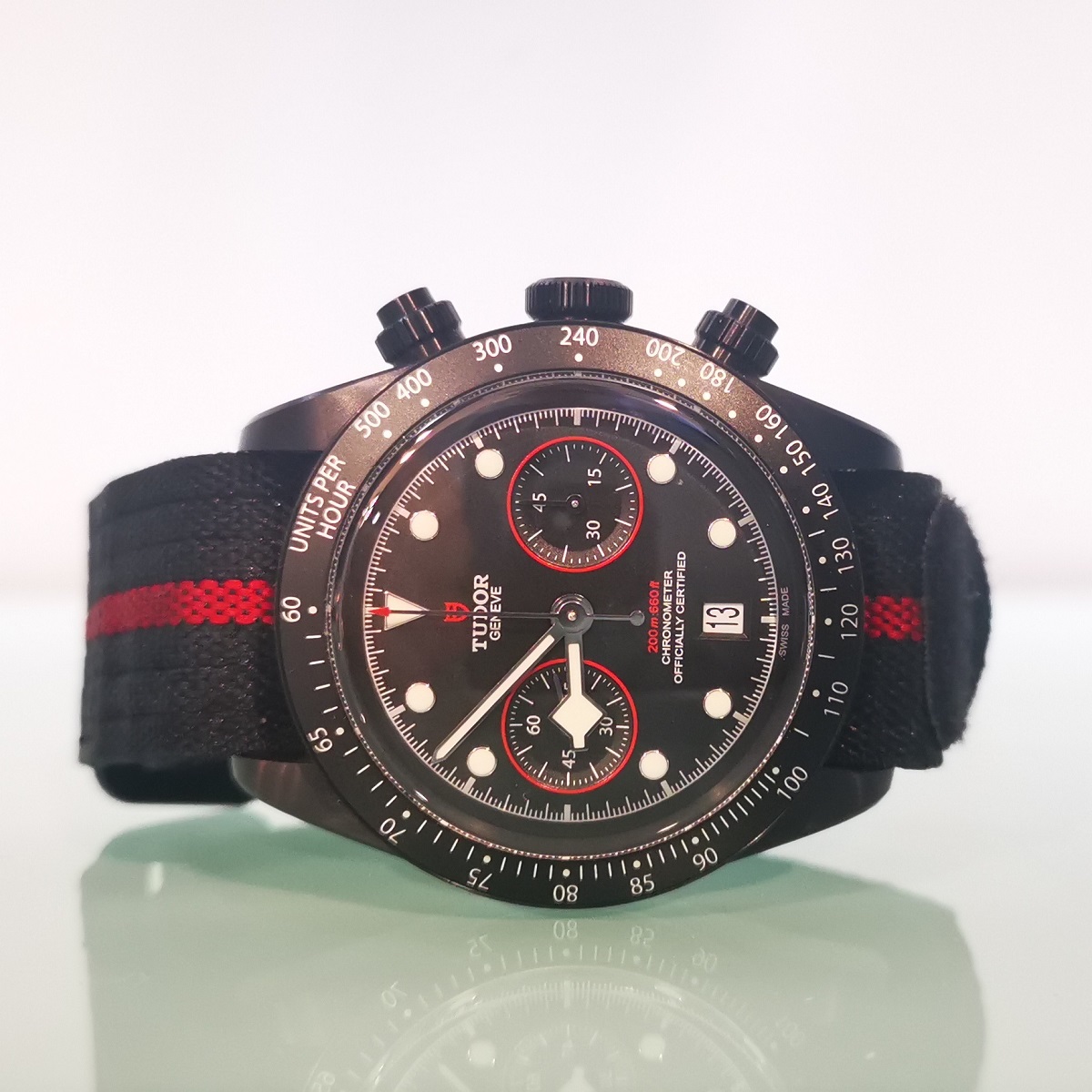 But if you want to wear the watch the Tudor Pro Cycling Team is wearing, you have to deal with real exclusivity, and that’s unattainability. The 41mm version with a black steel case, a black dial, and a black and red NATO strap is exclusive to the team and is not for sale. For now, the only way to strap one of these very sporty-looking, COSC-certified chronographs to your wrist is to train like crazy, win races, and pray that the management of the Tudor Pro Cycling Team signs you. I know, the chances are slim, very slim.

Ambitious and humane at the same time

Before the descent back into Altea, we have to ride uphill, of course. On any given day, trying to follow Sébastien Reichenbach on a downhill is still easier than holding his or his teammate’s wheel on a climb. Luckily, today is a rest day, and cycling with a small group of guests is easy — for the pros, that is. The Tudor Pro Cycling Team is a mixed group of seasoned pros and upcoming talent. Also riding with us are a couple of young lads from the development team that competes at the continental level. Having both a development and a pro team says something about the partnership between founder Cancellara and sponsor and name-giver Tudor. The vision behind the team emphasizes the human aspect of cycling. 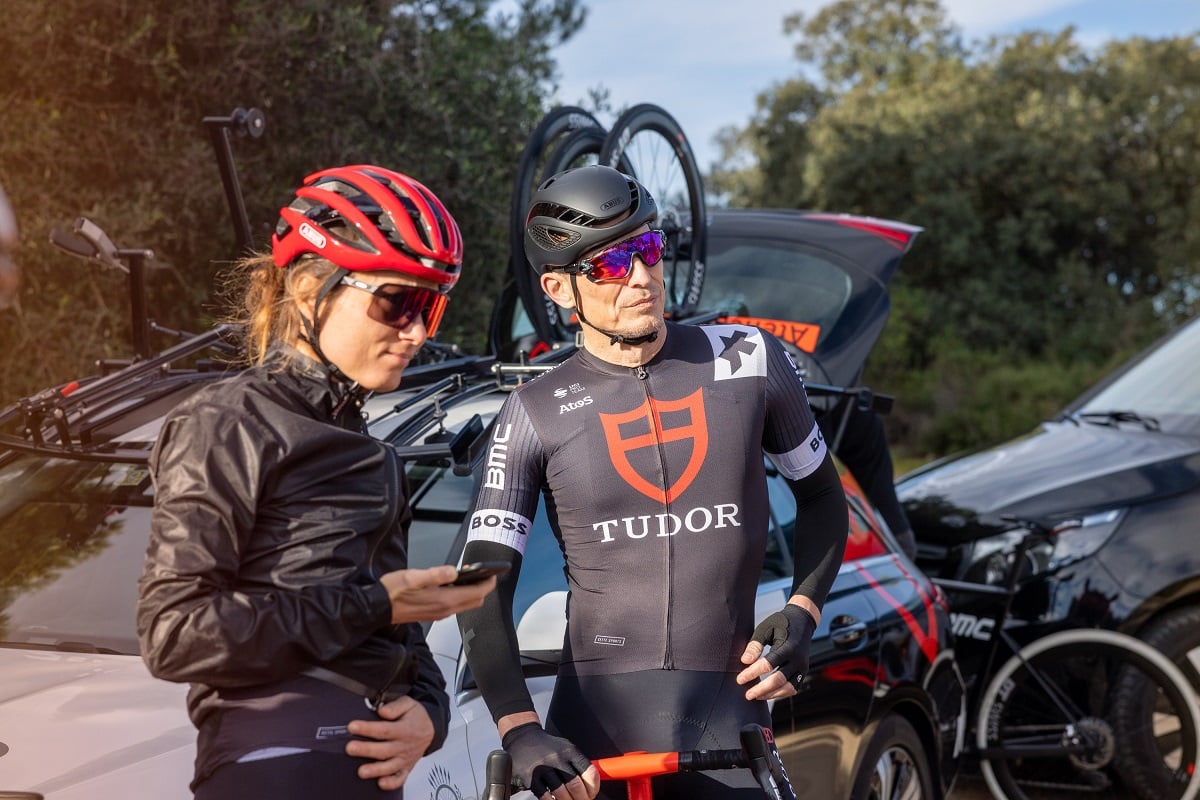 Cancellara explains the team’s philosophy to me soon after we leave the hotel for an afternoon ride: “The cycling world is a tough world. In our team, we don’t have a cut-throat approach. Sure, results matter — we’re a professional cycling team — but the way we manage the team is with empathy. We very carefully selected all the riders, and we think they perform best when treated with respect and in a safe environment. I believe that riders who have to push themselves every day, who are fully committed to their sport, can be the best they can be in the way we run the team.” 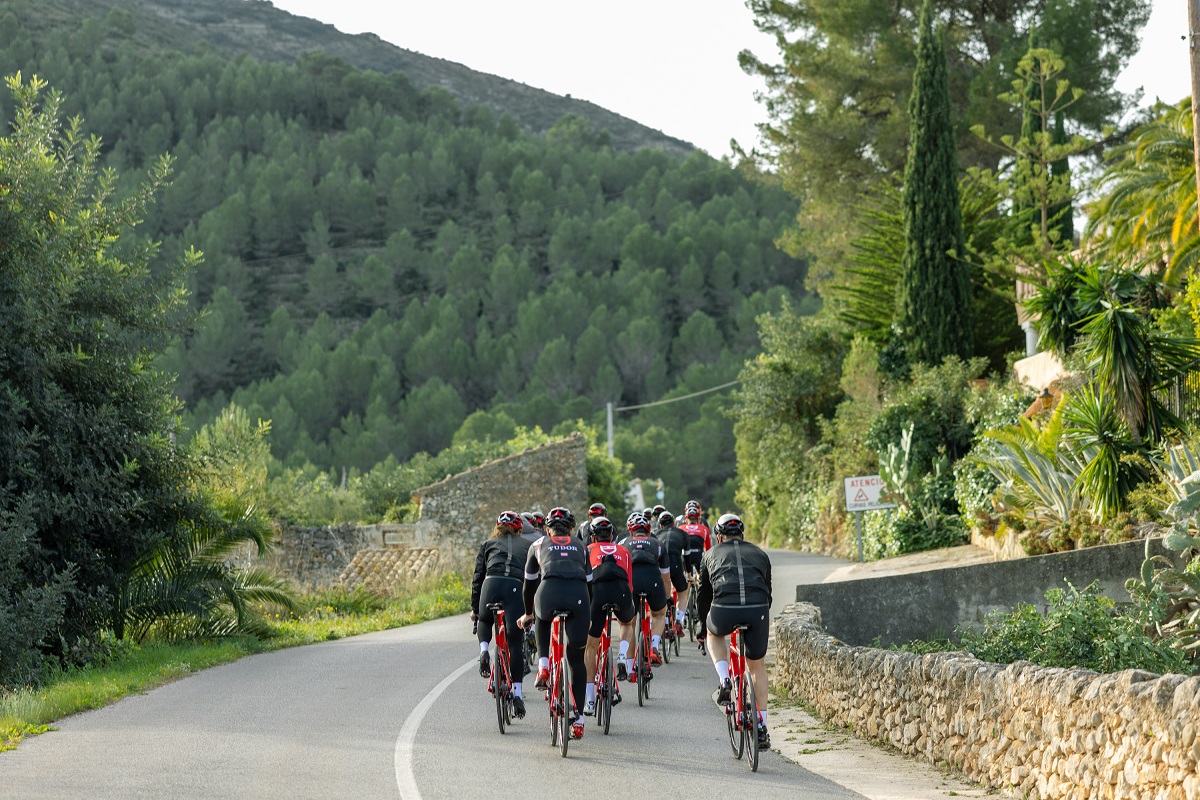 Tudor is in it for the long ride

Since Tudor is under the Rolex umbrella, the partnership between the watch brand and the cycling team is not a superficial one. “You can have your brand logo on the sleeve of a pro team for the right kind of money,” Cancellara tells me on the rolling roads outside Altea. “Spartacus” is a bit heavier than he was six years ago when he left the world of pro cycling with a gold Olympic time trial medal around his neck, and that’s why he’s eating a salad when I enjoy lasagna during lunch. Still, his physique is as impressive as ever, and he’s one with his bike. And the way he pedals is pure class. 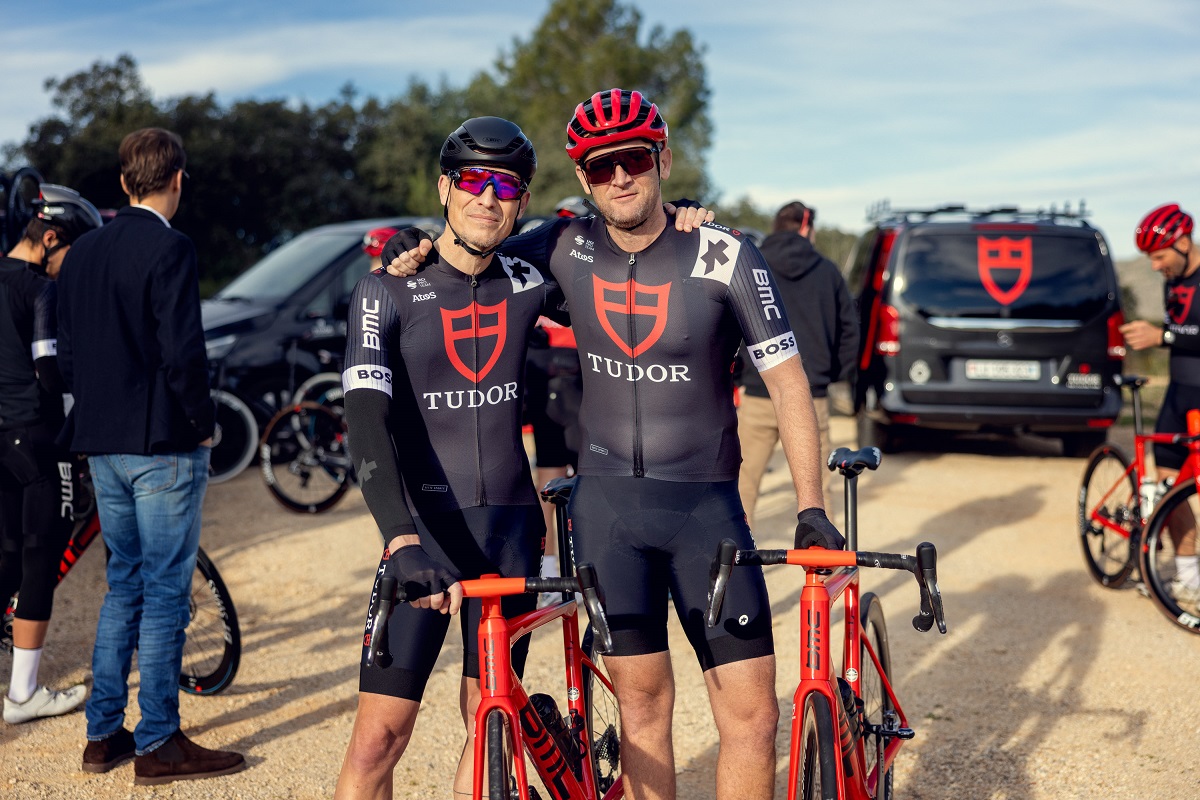 “You can sign a contract with a sponsor for two years or so and that’s it. The sponsor will see his brand logo on the television, but there’s no real deep connection or involvement with the team. Tudor is different. We’re in this project together, and we’re in it for the long ride, so to speak. That’s also why we have a development team. We want to sustainably develop talent that eventually will win big races. Commitment, ambition, respect, and responsibility will lead to success. I firmly believe that.” 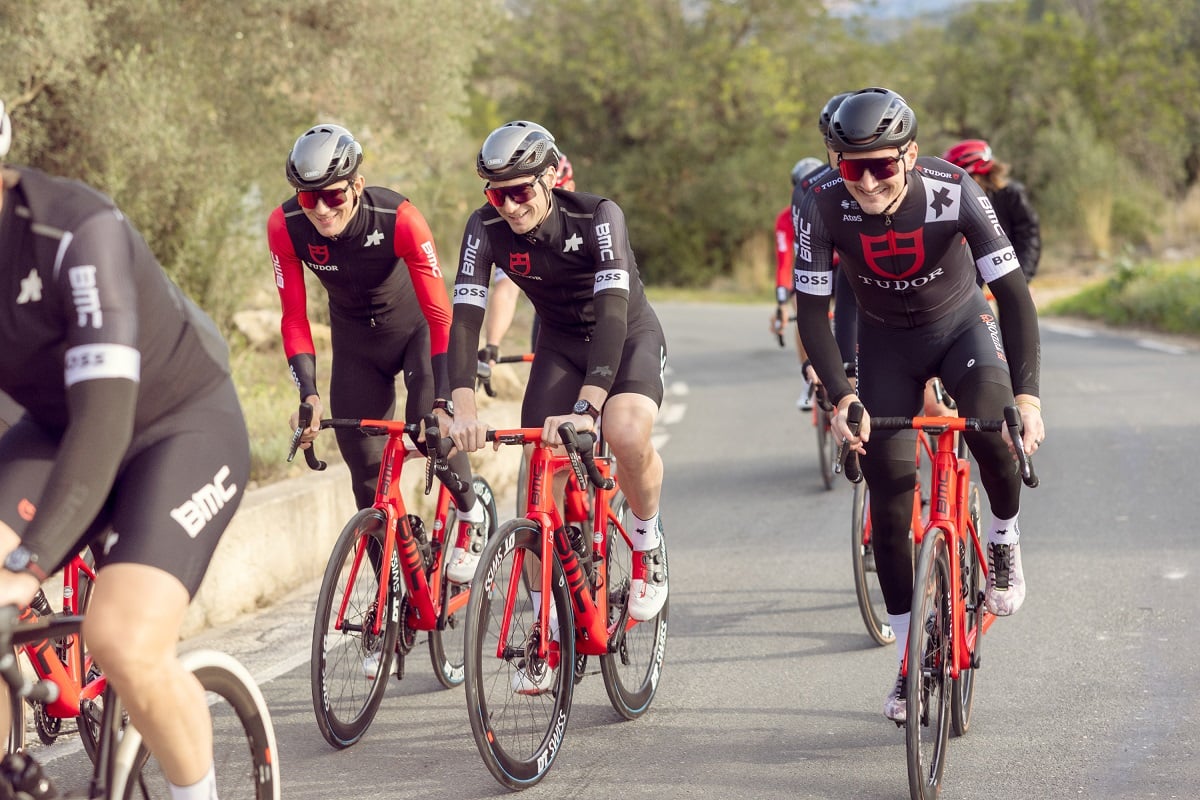 One way to see if a cycling team is doing well is by looking at the jerseys. The special jerseys, I mean, the championship ones, not the regular team jerseys. And the Tudor team has plenty of aerodynamic Lycra in a different color scheme. In the pro ranks, there’s the current Swiss road racing champ Robin Froidevaux (24). There are also the Swedish and Danish elite road racing champions, Lukas Eriksson (26) and Alexander Kamp (29). Also present are Nils Brun (22), the under-23 Swiss champion, and Fabian Weiss (20), the U23 Time Trial Swiss champion.

The shiny and still-pristine team car

The mix of eager young riders, experienced and ambitious pros, and a development program to ensure a flow of talent will have to lead the ProTeam to WorldTour level, the Champions League of cycling. For now, the team will ride smaller races and hopes for wild card invitations to, for instance, the Tour de Romandie and the Tour de Suisse. Having Fabian Cancellara — in a way, the Roger Federer of cycling, a former, multiple TdF stage winner, and 29-time yellow jersey wearer — as the team owner will certainly help to get wild cards. But in the end, a WorldTour license for the team is the goal. Because when a cycling team has a WorldTour license, all the grand tours, including all the big classic races and the biggest race of all, the Tour de France, are a certainty. 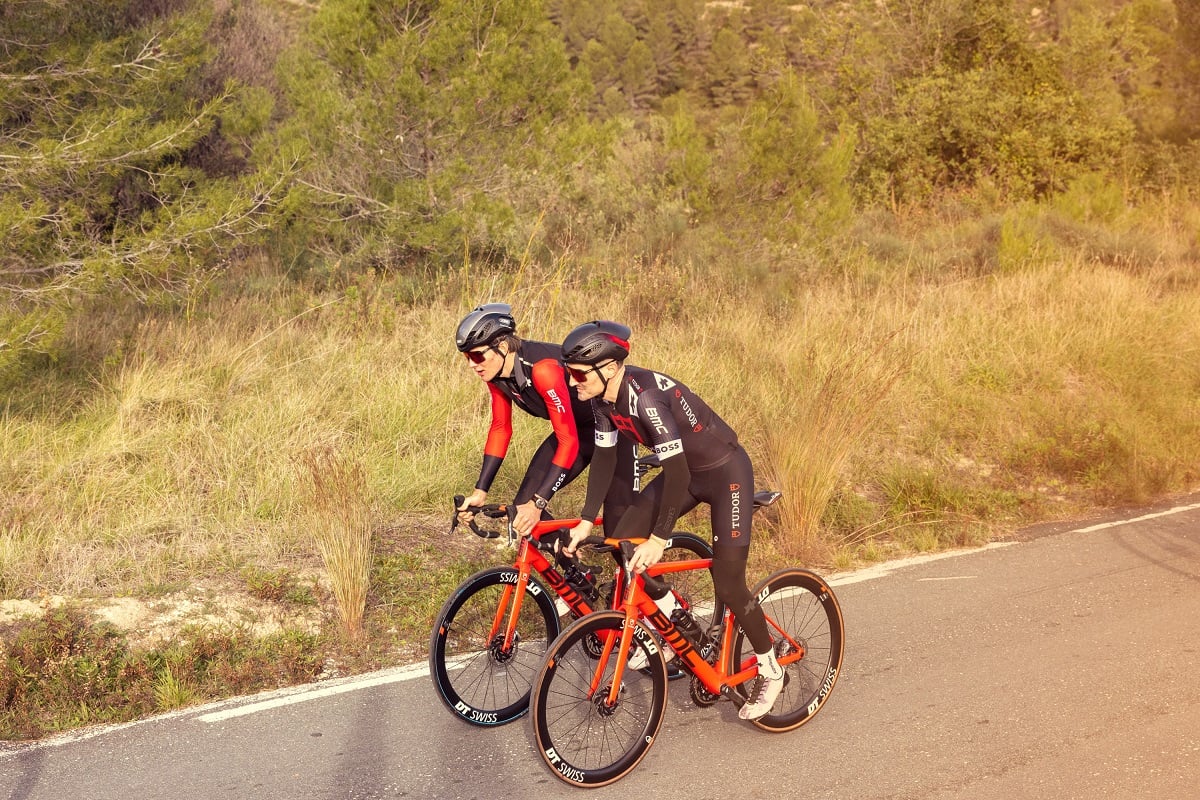 The road to the top is colored red

It might come across as a cliché when I say that the Tudor Pro Cycling Team works as precisely as a Swiss watch. Still, just from the looks of it, everything is perfect and very, very Swiss. The all-new BMC bikes in striking “Tudor Red” are outfitted with light, aero DT Swiss wheels and ridden by riders wearing Swiss Assos kit and Swiss Suplest shoes. All the equipment the team uses is cutting-edge technology from leading manufacturers, and the staff surrounding the riders is also top-level. “We are representing Switzerland,” Cancellara tells me just before reaching a desolate-looking little town on top of a low hill we reach after a gradual and not-too-straining climb. 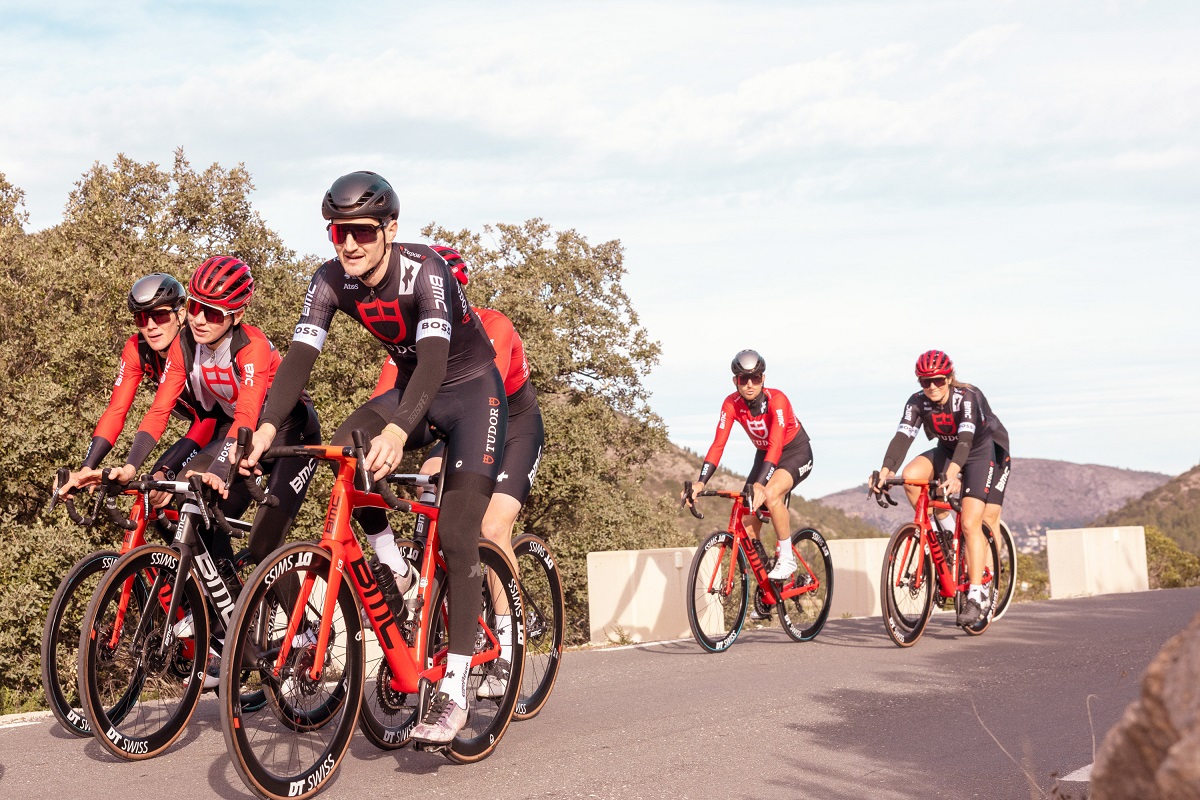 “As you very well know, Switzerland is known for its excellence. We have to live up to that expectation. We are, in a way, ambassadors. And yeah, ‘Swissness on wheels’ sounds about right. The fact that we represent Switzerland and Swissness also means there’s pressure on us. Yet, at the same time, it also brings us inspiration and motivation. What we’ve built together so far makes me proud, and I believe that our philosophy and our way of doing things are right. When the racing starts this year, we will find out if that brings us the results we all strive for. I just can’t wait for the season to begin.” 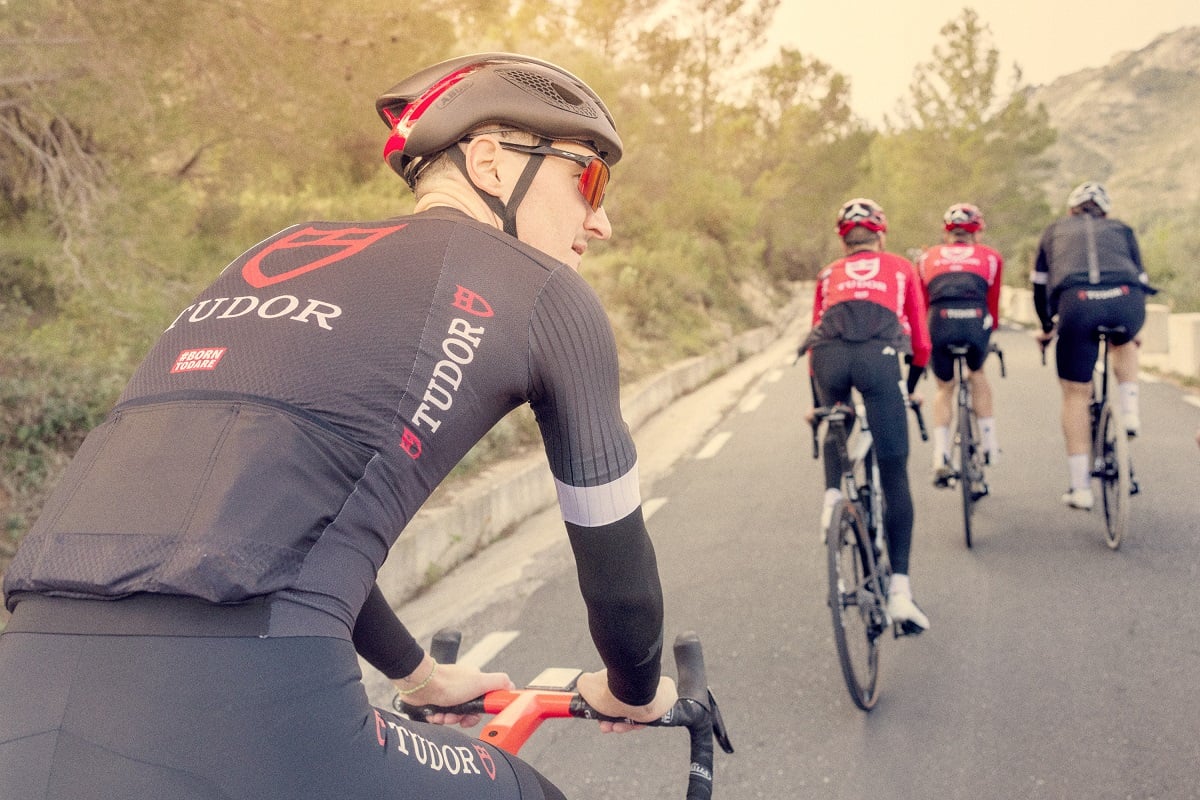 With Sébastien Reichenback ahead of me, I make it safely to the bottom of the hill. And on the flat part to the café/(pro) cyclist hang-out where we are going to have lunch, I catch up with him for a little chat. An easy chat, cyclist to cyclist. We talk about bikes, races he was in, and what it’s like to travel and train all the time — stuff like that. It’s just like the easy conversations I had with the other members of the team, be they full pros or an 18-year-old from the development team. All of them came across as grounded, serious, smart, passionate, and happy guys, living their best lives and ready to race hard. 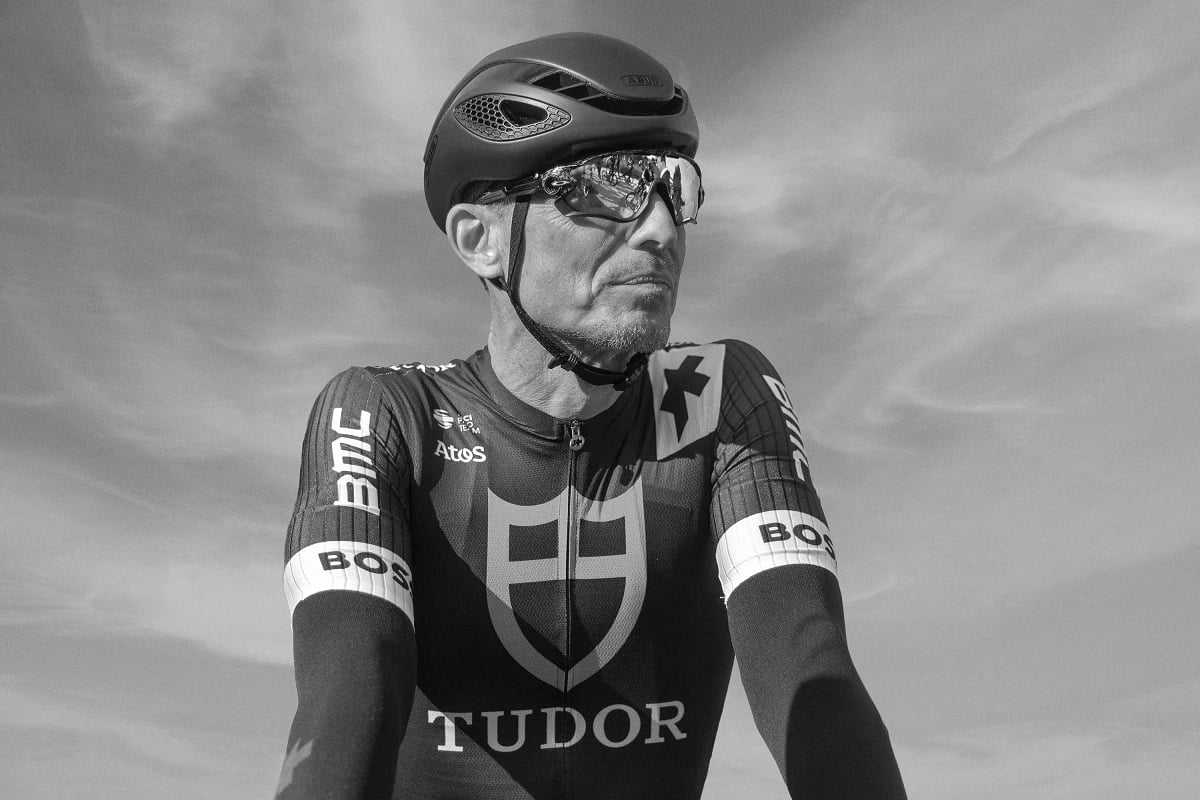 For two days, I was lucky to see and partially experience what it’s like to be part of a pro cycling team. From the backseat of the team car, I saw them speeding uphill on a training day when they were taking it “easy,” and was in awe. I had a laugh with them about doing yoga before training starts. And I was on the wheel of Swiss rider Roland Thalmann (29), who guided me back to the hotel after lunch, admiring his coup de pédale and enjoying his company. For two days, I was a pretend pro, and for an avid amateur cyclist/weekend racer, that’s the experience of a lifetime.

For more info and to follow the races and results of the Tudor Pro Cycling Team, you can click here. And to check if there’s a “civilian” version of the Black Bay Chrono in black and red, you can visit Tudor’s official website.