We seem to love giving nicknames to watches and color schemes where possible. I mean, it makes sense — it’s easier to remember the Rolex Pepsi GMT rather than Rolex GMT-Master II 126710BLRO. Some of the nicknames make sense and are logical. Other’s are a bit tenuous at best. One such nickname which perfectly fits the use is the classic “panda dials”. These dials became incredibly popular during the late 1950s and 1960s, and their popularity hasn’t waned since.

I don’t feel it really needs too much explaining. A white (or perhaps off-white) dial with black subdials. It’s quite an obvious homage to the most famous of all panda bears, the giant panda. Over the years, this dial setup has become iconic and is a timeless classic. If you think of any of the top brands in the industry, they’re likely to have at least a couple of panda dialed watches in their archives. 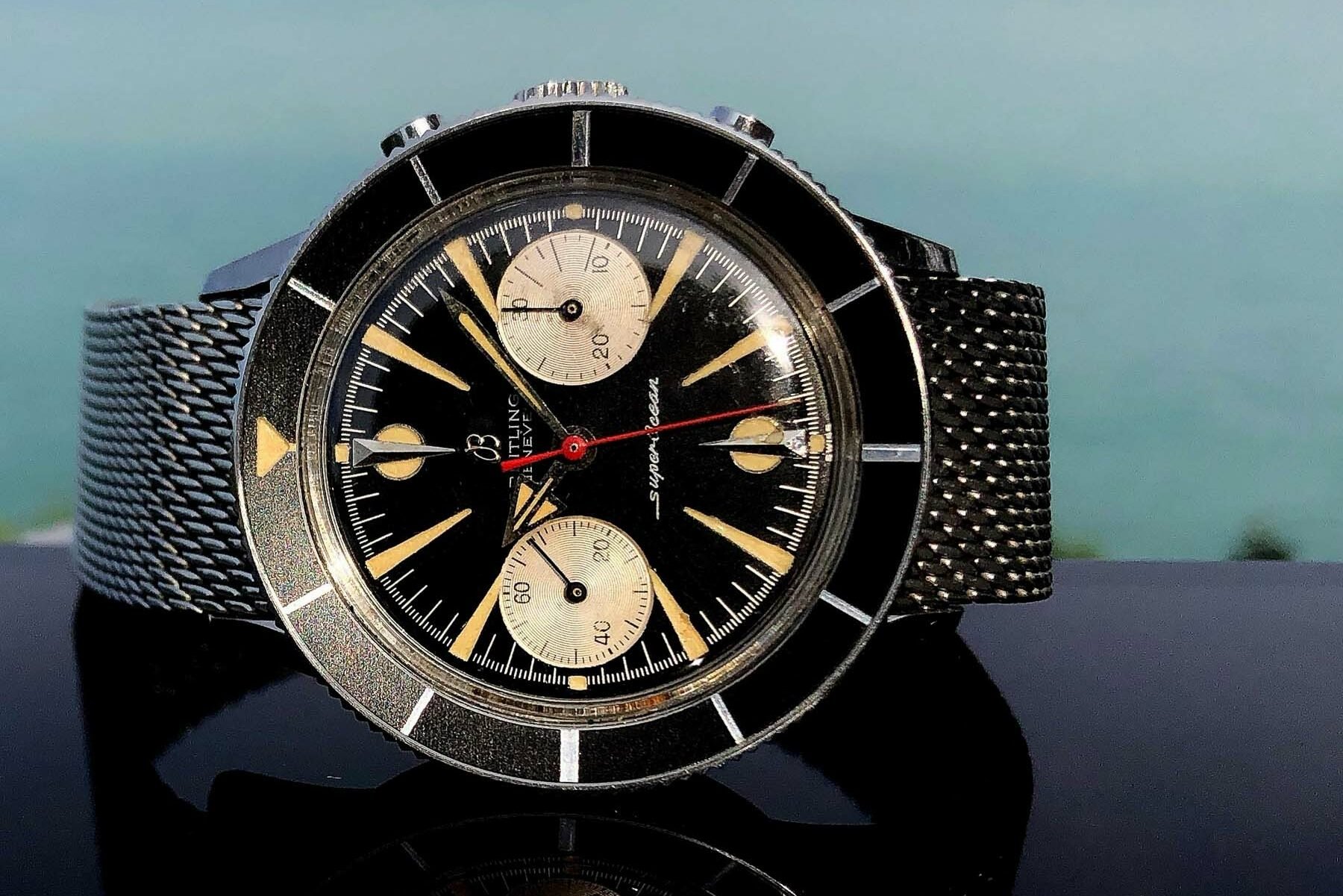 The contrast of the black subdials on the white dial offers incredible legibility. Indeed from my research, the earliest iteration of the panda dial I can find came in the form of the Breitling Superocean Ref. 807. Although technically not a true panda dial and more of a reverse panda dial, the Superocean 807 was a dive watch and, as such, designed to be legible underwater. Hence, the contrast factor is so important. Over the next five to ten years, the industry started seeing more and more panda and reverse panda dials from Breitling, Rolex, and Tag.

Me? I love the look of the panda dial. Especially the classic panda dial rather than the reverse version. Those black subdials on a nice white or silver dial really add a touch of class to a watch. As such, I thought it’d be nice to perhaps compile a list of my favorite panda dials of all time. I rather like writing these articles because it’s always interesting to hear what you guys would put in your “Top 5” lists. Make sure to let me know in the comments!! 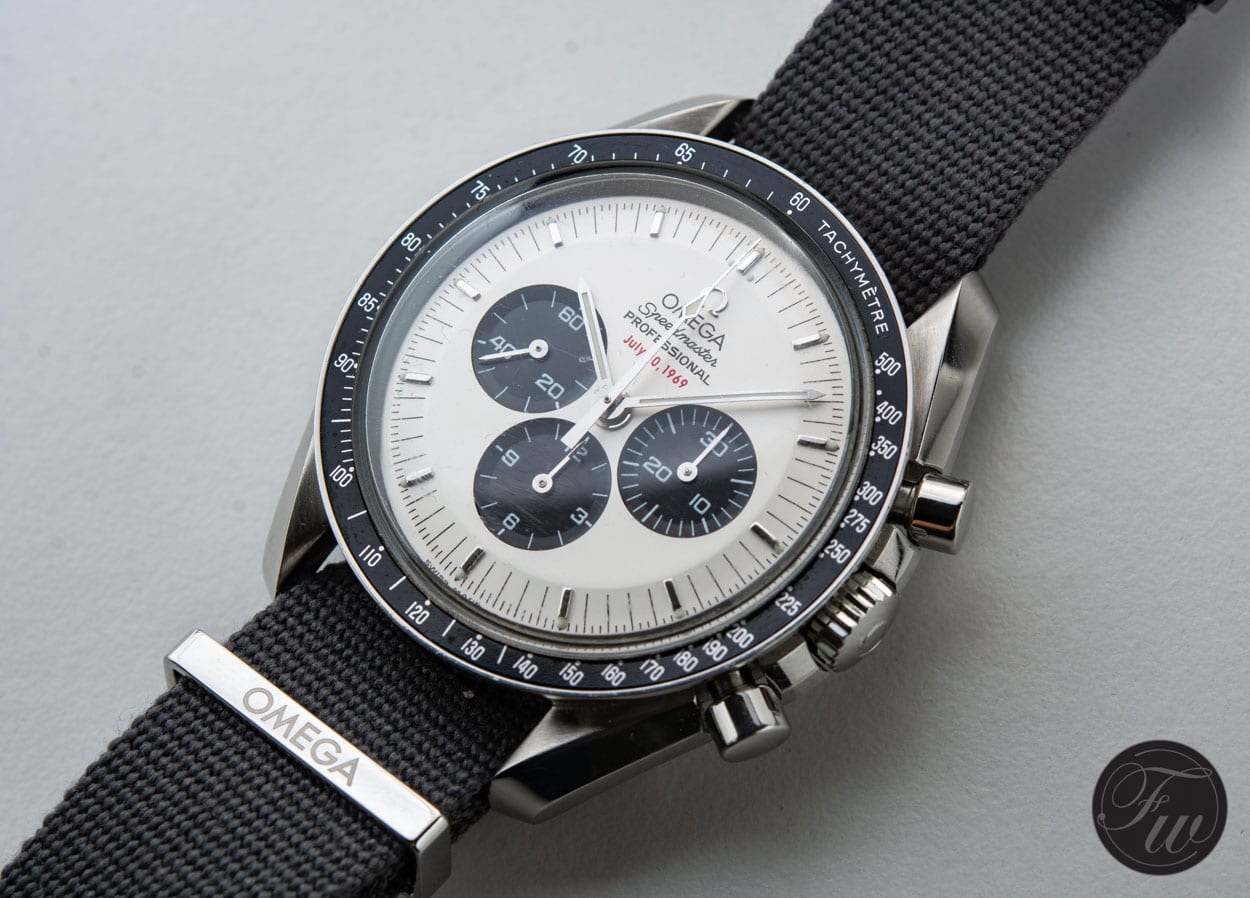 I have to start with a Speedy, really, don’t I. After having spent the last couple of weeks with one of RJ’s Speedmasters on my wrist, I’ve really been bitten by the bug. Omega is no stranger to a panda dial and has released a few different variations over the years. Still, my favorite is the Apollo XI 35th Anniversary, released in 2004. I have a fantastic Omega #SpeedyTuesday poster in my home office. It has 62 different Speedmaster models on it, in order of release. I love looking at it, but my eyes are often drawn to this model. It has such a clean and classy dial, and it watches like this that really make it clear why panda dials became so goddamn popular. 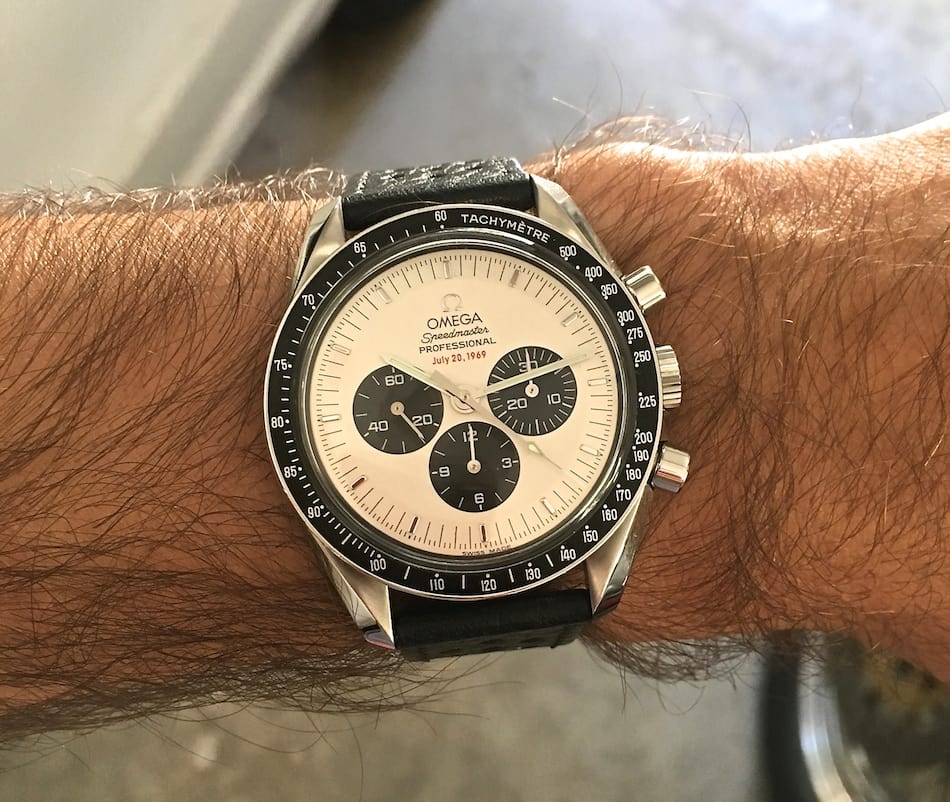 Released as a limited edition of 3,500 pieces in 2004, the gorgeous panda dial isn’t what makes the Speedmaster Apollo XI 35th Anniversary so special either, even if it certainly helps! The attraction, for me, is that this model was only the first widely available panda dialed Speedmaster Omega ever released. Admittedly, Omega made 300 similar watches back in 2003 for a Japanese department store called Mitsukoshi. Still, the Apollo XI 35th Anniversary was the first time this dial combination was available worldwide. Oddly enough, the brand has never circled back round to the panda theme either, despite the fanbase clamoring for a bit of black on white. 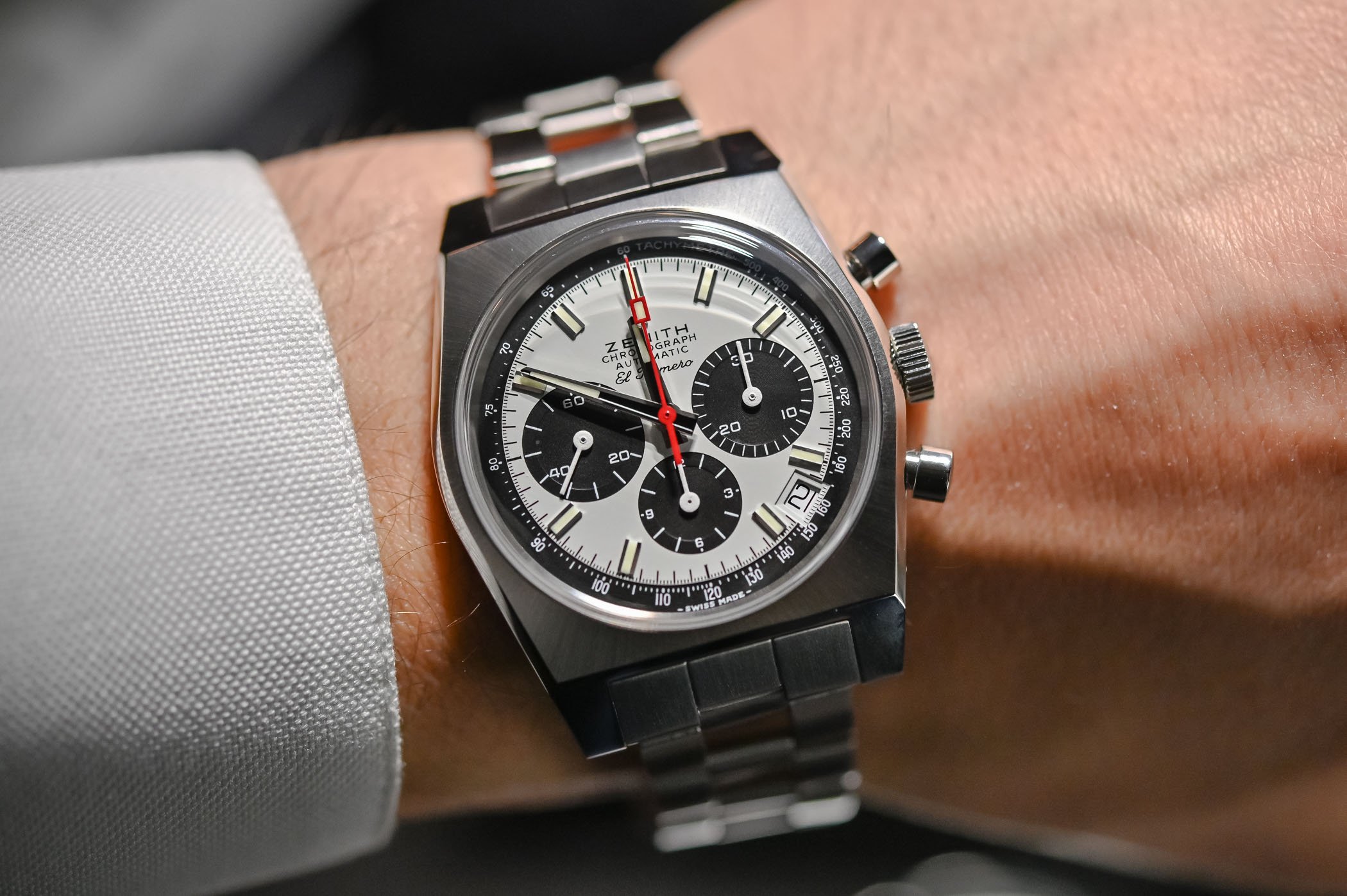 Ah, another much-beloved watch among the team at Fratello HQ. Zenith introduced the Chronomaster Revival A384 to celebrate the El Primero movement’s 50th anniversary back in 2019. Back in 1969, Zenith was one of three brands to release automatic chronograph movements that year. The El Primero came with several exciting features: its integrated automatic winding assembly, a column-wheel/horizontal clutch architecture, and an emphasis on precision and buttery-smooth sweep thanks to the 5Hz frequency.

Zenith decided to showcase this special new movement in three watches, the A386, A385, and the A384. As many of you may well know, the A384 and A385 were practically the same watches, just with different color schemes. It was the A384, however, which got that special panda-dial with its sporty, red accents.

Long-time fans of the brand will be happy knowing that the Revival A384 stayed pretty darn faithful to the original, with Zenith adopting a “reverse-engineering” approach to recreating the iconic model. Each part of the original El Primero A384 from 1969 was digitally captured for accurate reproduction, resulting in a genuinely authentic watch. I love the 37mm cushion-shaped case of the A384, and of all the models that Zenith has used this case for, the A384 is probably my joint favorite with the Revival Shadow. I really need to get one of these on the wrist soon as I’m still to get hands-on with one! 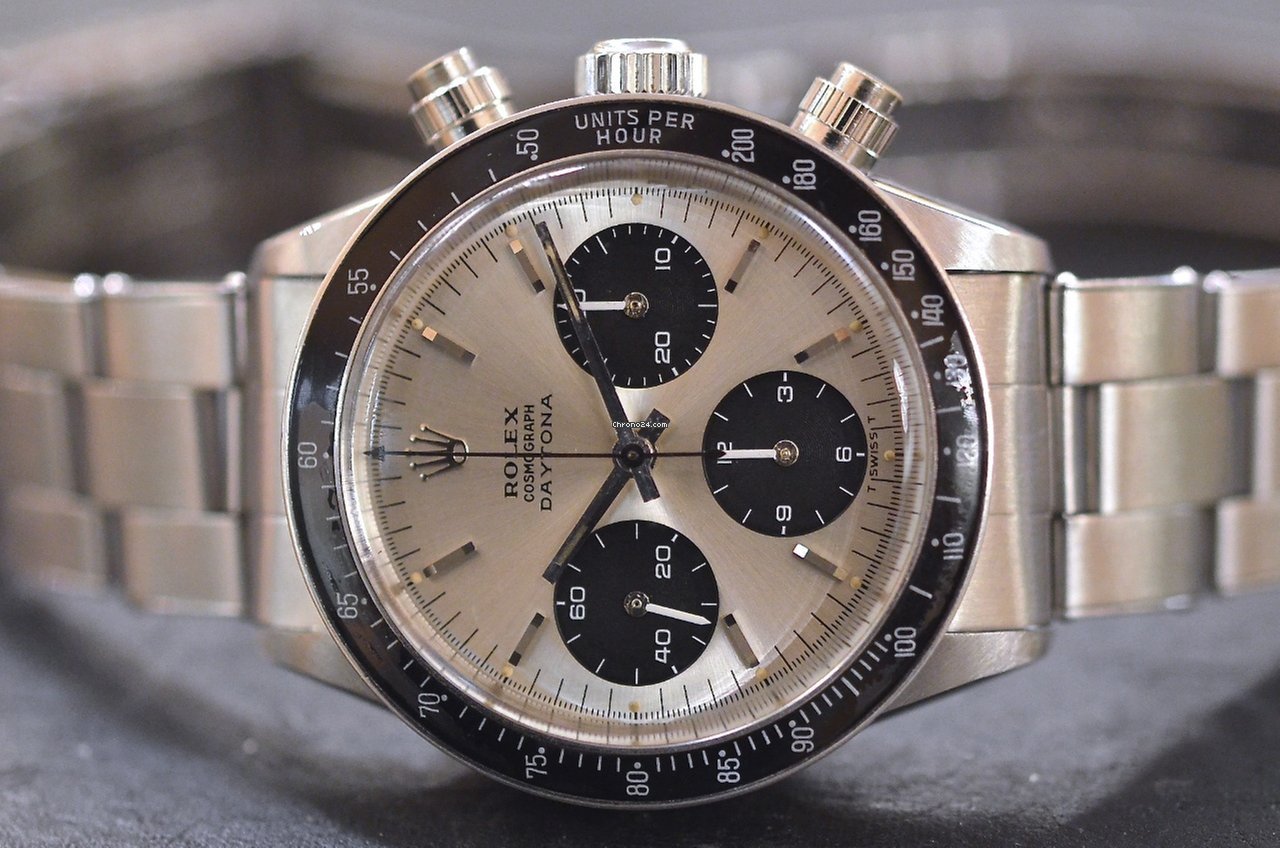 It’d be hard to write a list of top panda dials and NOT include a vintage Rolex Daytona. I have a bit of a mixed opinion about Rolex as a brand. Still, even I cannot deny how downright sexy the vintage Daytonas were. Rolex released the first official Daytona in 1963, the Cosmograph Reference 6239, in a “reverse panda” dial configuration with a steel bezel. It was the first Rolex chronograph to feature the “Daytona” moniker on the dial. The Crown made a few different versions of the panda dial Daytona in the 60s and 70s, with different bezel material and dial designs. It’s tough to pick a single victor here, so I have narrowed it down to two. The “Paul Newman” Daytona and the Reference 6240. 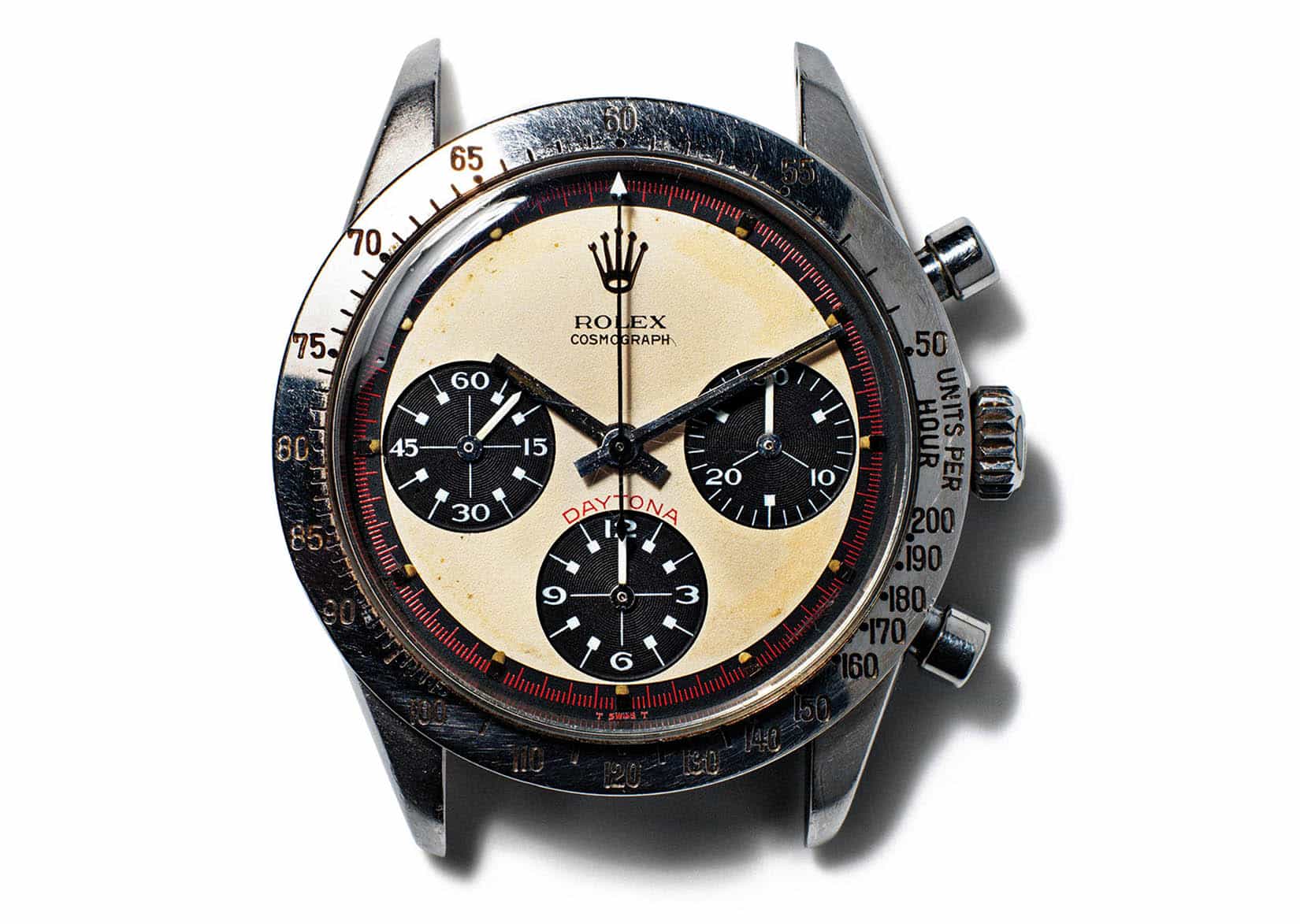 The name “Paul Newman” has practically become folklore when it comes to the world of vintage Rolex Daytonas. It’s very easy to get confused by the multitude of reference numbers and the addition of the Newman name. Paul Newman’s name usually refers to the dial, an “exotic” art-deco-inspired panda dial variant rather than the standard dial. Paul was always seen wearing it, and it kind of became his trademark of sorts. It’s not uncommon to see various reference numbers with the Newman name attached. However, if we’re talking about “The Paul Newman Daytona”, the one that sold for $17.8m at Phillips auction house in 2017. In that case, that is a reference 6239 with the art-deco panda dial and a classy steel bezel, and simple pump pushers. It was a gift from his wife, and what a gift it was!

Released in 1965, the 6240 was the successor to the 6239. It marked the introduction of the screw-down pushers, offering water resistance not found on its predecessor. That said, it wasn’t until 1967 was considered fully waterproof, and the word “Oyster” was added to the dial. The 6240 also moved away from the steel bezel and featured a black acrylic inlay instead. Possibly my favorite thing about the 6240, though, is the stunning silver sunburst dial. Combined with the black subdials, this is one heck of a watch. It’s not hard to see why these watches have become so collectible — this kind of style never goes out of fashion. 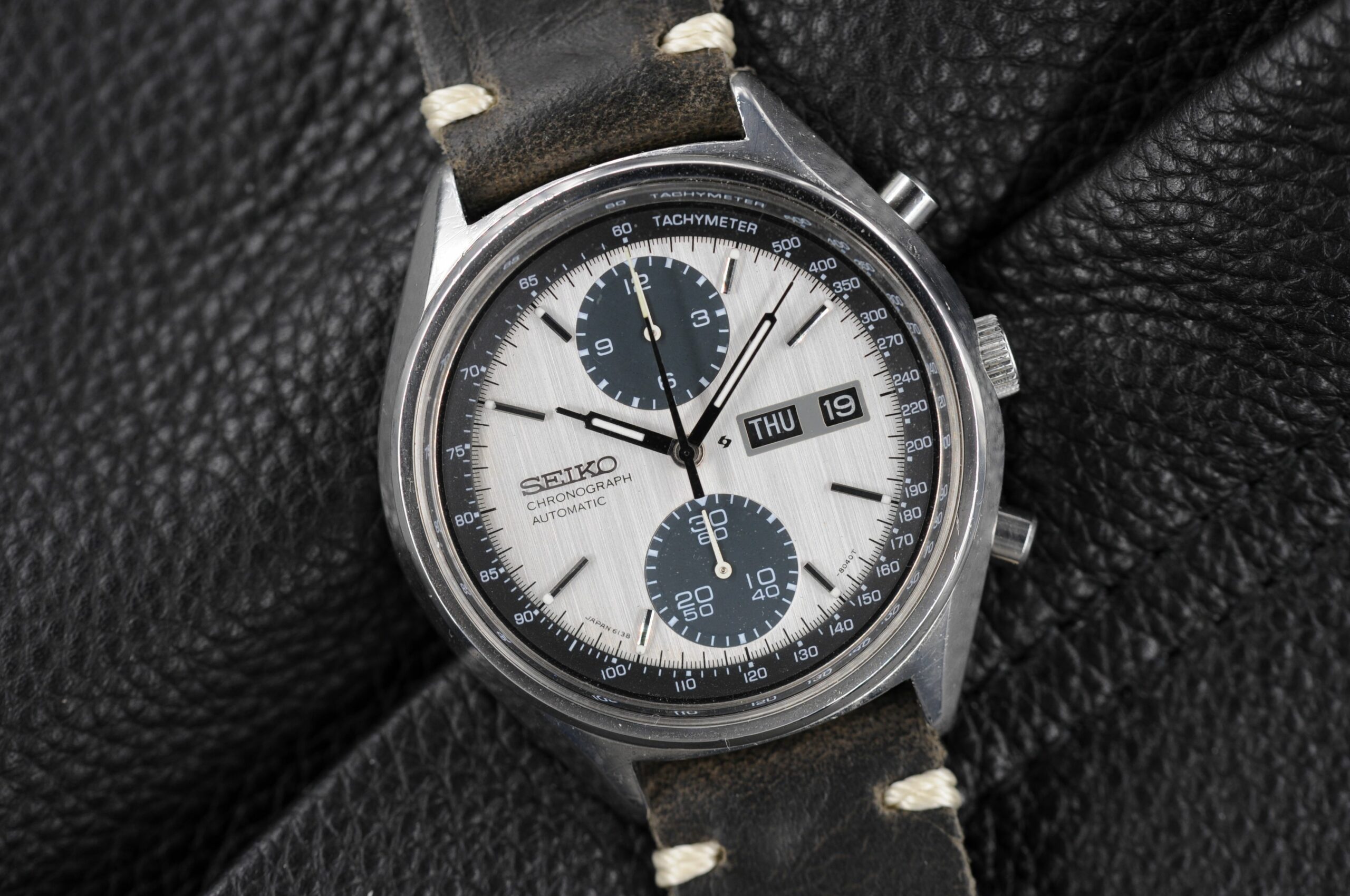 I previously mentioned that Zenith was one of three companies to release an automatic chronograph movement back in 1969. Well, one of the others was the much-loved Japanese brand, Seiko. The 21-jewel Seiko 6138 was Seiko’s first fully-integrated two-register automatic chronograph with a column wheel and vertical clutch. Seiko’s 6138 line of chronograph watches were designed to be affordable watches at their release. As a result, they were well used and abused. That means that most vintage examples are well-used, and many of them have gone through some type of restoration or polishing.

Of all the different variations Seiko released, the panda-dialed 6138-8020 is one of the all-time favorites among collectors. Sadly, these watches are rife with fakes and “Frankenstein” examples, cobbled from various donor watches. That said, the 6138-8020 is one of the coolest watches on this list because, design-wise, it was way ahead of its time. The other watches on this list so far all perfectly capture the Zeitgeist for when they were launched. The Speedy is a bit of an exception to that as it was released in 2004, but its dial perfectly captures the essence of 1969. However, Seiko’s dial design looks like it could quite as easily have been launched just last week. 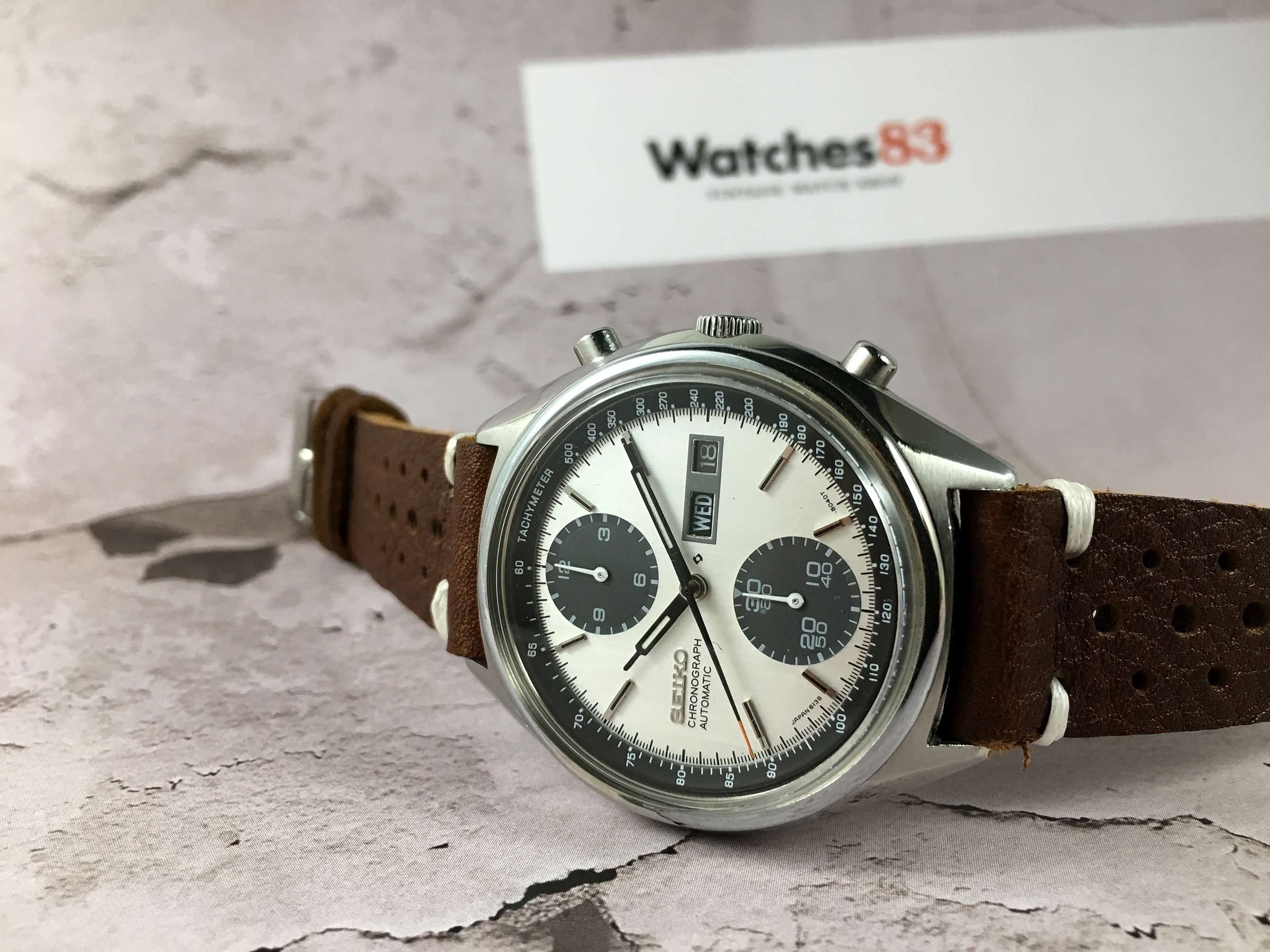 The only watch on this list not to feature the standard 3/6/9 sub-dial arrangement, the 40mm 6138-8020 has a rather unorthodox 12/6 dual sub-dial layout. It’s worth noting that Seiko also produced a “Baby Panda” model, marked 6138-8000. While this version also had a 40mm case, it had smaller subdials than its sibling. This model is scarce, with the chances of finding a working example in good condition as rare as hen’s teeth. Thankfully the 6138-8020 looks better (in my opinion) and is easier to come by. 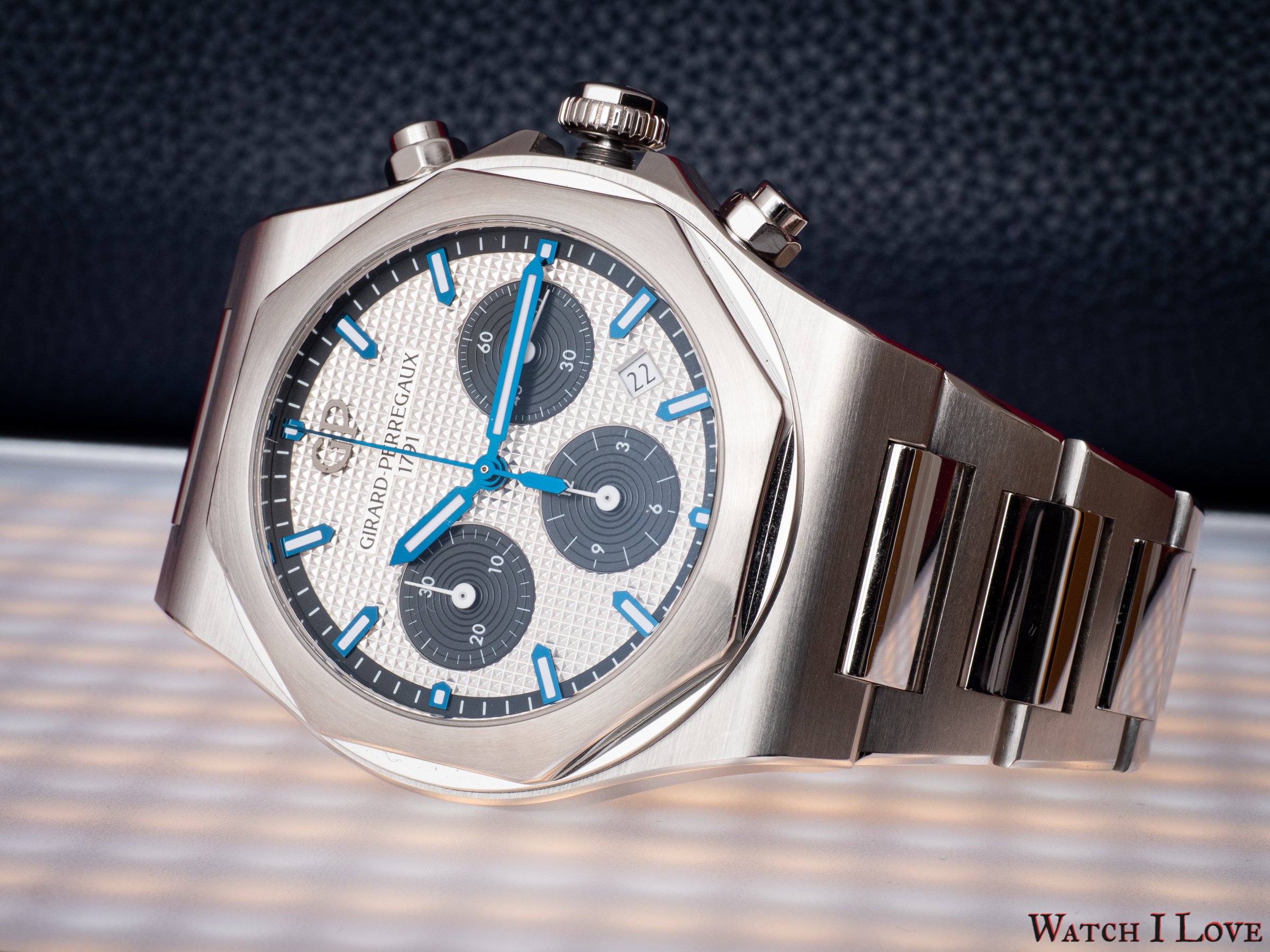 Finally, we have a modern watch to cap off this list. It’s probably not one that too many people would choose, which is possibly why I love it even more. The Girard-Perregaux Laureato Chronograph Reference 81020-11-131-11 is 42mm of 904L steel goodness. 904L steel is differentiated from regular 316L steel by its higher chromium content. This gives the material higher corrosion resistance and allows it to take on a radiant sheen during finishing. This is no more obvious than on the beautiful integrated bracelet, showing off alternate brushed and polished surfaces.

The Laureato design was initially born during the height of the Quartz Crisis in 1975. The signature bezel design was inspired by a Florentine cathedral, the Santa Maria del Fiore, with the octagonal bezel sitting atop its circular base. Unsurprisingly the Laureato design has endured many claims it copied from the work of renowned watch designer Gerald Genta. Still, I’ll leave you to make your own decision on that one. The Laureato case is really a thing of beauty, but, for me, it’s the dial of this particular reference that takes it to a whole new level.

Saving the best until last?

The dial starts with a beautiful silver hobnail pattern. I love textured dials, and I also love combining black sub-dials on a silver base. Hence, the Laureato Chronograph is already off to a good start. The black subdials are slightly recessed into the pattern, which helps emphasize the depth created by this 3D hobnail dial pattern. The one thing I do not like about this model is the date window. I would have preferred the date wheel font to use a more modern font as used on the subdials — I’m not a fan of the serif font that the brand chose to use. The white wheel also slightly detracts from the silver dial. Hardly a deal-breaker if I were looking to buy, but a minor dislike nonetheless.

Panda dials are known for their high-contrast and extreme legibility, but the Girard-Perregaux Laureato Chronograph goes a little further. It adds a subtle pop of color to the usually monochromatic color scheme. The hands and hour markers are polished blue steel. I’m not sure if they’re heat-blued or IP-coated (a quick Google search didn’t give me an answer), but the effect is quite striking. I’ve seen various images of the watch where the color really changes from a dark and muted blue to quite bright and vibrant. Add that to the silver texture dial, and this is a watch that will really change character in different lighting conditions.

So there we have my list of top 5 panda-dialed watches. How does it match up to your list? Make sure you let me know in the comments as I want to know!