The Panerai Submersible QuarantaQuattro Bianco PAM01226 — Will This Be My Re-Entry To The Brand?

The new Submersible QuarantaQuattro Bianco PAM01226 brings back memories of the first Panerai watch that pulled me into the brand. It must have been sometime in the summer of 2004, and I was visiting Antwerp with my then-girlfriend (now-wife). As I always do when traveling, I also stopped by a few jewelry stores in the area to check out some watches. One of them was a Panerai dealer, and I noticed a model in the window that immediately caught my interest. It was a white-dialed Panerai PAM00113 on a tan leather strap.

At that point, I had never owned a watch from Panerai. However, I really liked the PAM00113’s large case, big numerals, and, at that time, uncommon white dial. I had seen and tried on the Panerai Luminor and Luminor Base models with black dials, but never in white. Normally, I’m not a huge fan of white dials, as I find them to be too hard on the eyes. And especially with my pale skin tone, they just don’t look very good. But I went for it anyway, as wearing the PAM00113 on the tan leather strap softened the white dial somewhat. I did not buy it on the spot, but rather, I ordered it through my then-regular watch dealer. 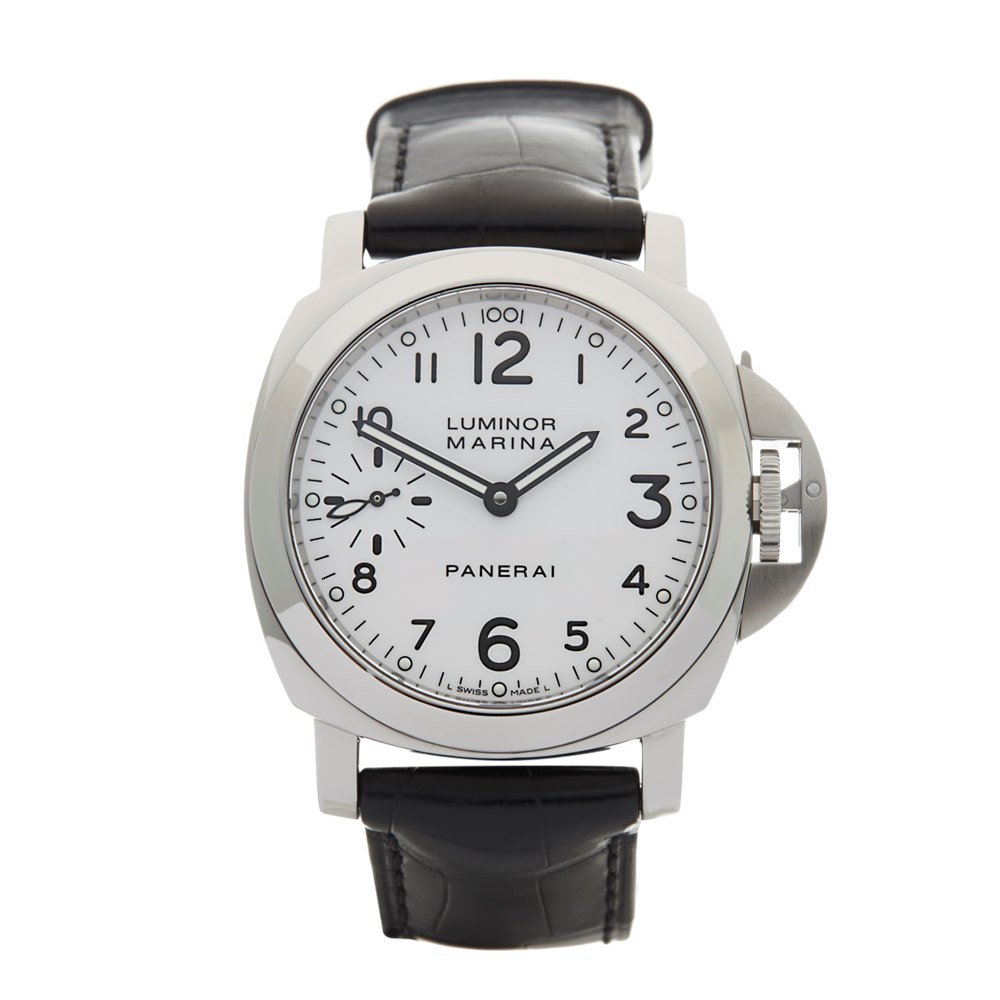 A Panerai with a white dial

When the watch arrived, the big wooden box made an instant and lasting impression on me. Inside was the watch, an additional rubber strap, and a screwdriver to change the strap yourself. It was a dangerous thing to do yourself; alas, the quick-change systems we see today weren’t that common back in the early 2000s. With a bit of 3M tape, you could at least somewhat protect the lugs from incurring scratches while changing the strap.

I never ended up wearing it on the included rubber strap. I did, however, get my fair share of other straps suitable for the immense 24mm Panerai lugs. Alligator, denim, calf, and even beaver tail — I had them all. Swapping straps always resulted in a new (or at least a different) look for your watch. There was seemingly no need — at least for a while — to buy another watch to scratch that ever-present itch watch enthusiasts have. 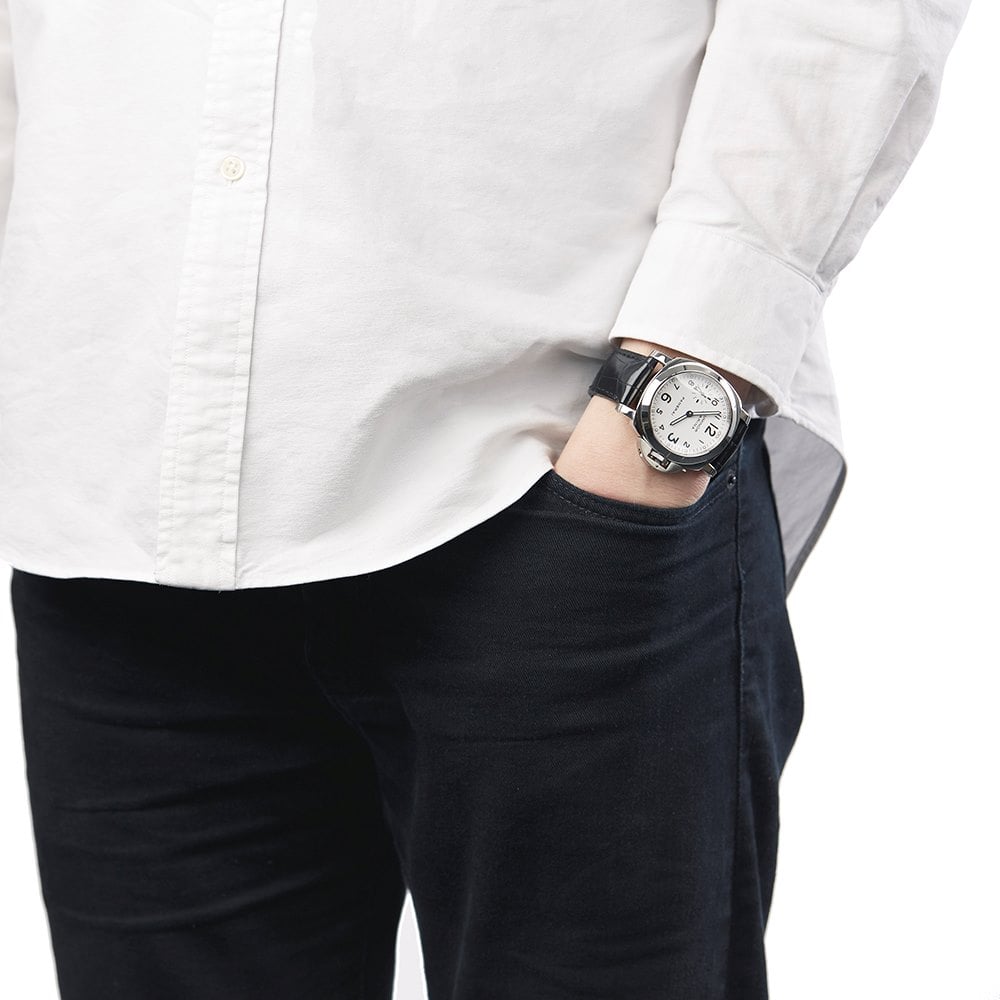 But, as always, new things arrive on the horizon. Eventually,this Panerai PAM00113 had to make way for something new. I can’t even remember what watch it was specifically. However, I wouldn’t be surprised (and neither would you) if we were talking about some kind of Speedmaster here. That said, at the time, my focus was on watches that had this little crown on the dial.

Some years later, a black-dialed Panerai Base Logo followed (PAM00000, if memory serves), but that was a short-lived adventure. I kind of lost my interest in Panerai from a collector’s perspective, but always followed the Florence brand in the years that followed. Though I have not always liked what Panerai has made or presented to us during the SIHH shows (now Watches And Wonders), that also applies to many brands. First and foremost, I am an observer, and I write about the watches I find interesting. Whether they end up in my personal collection or not is not that important. 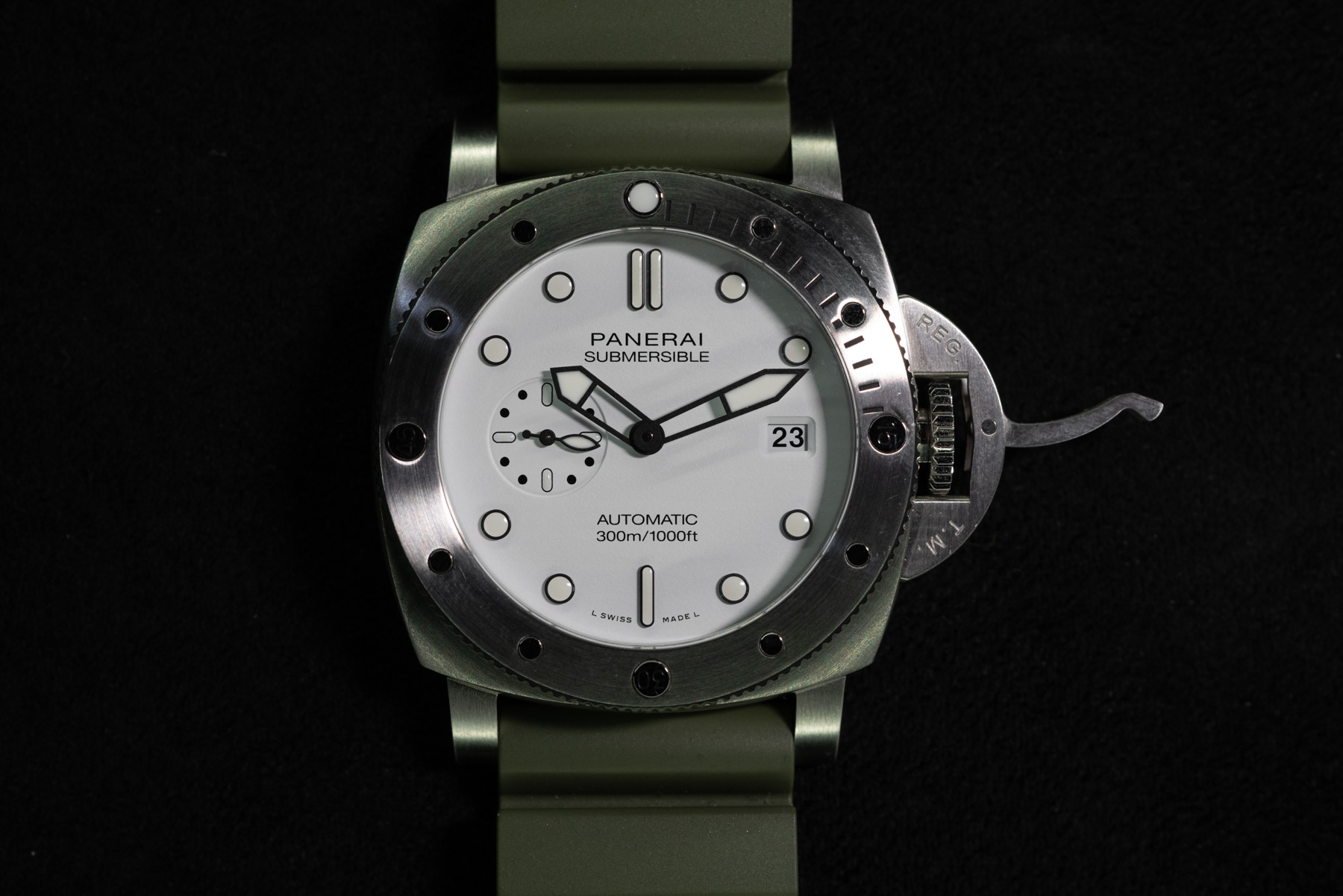 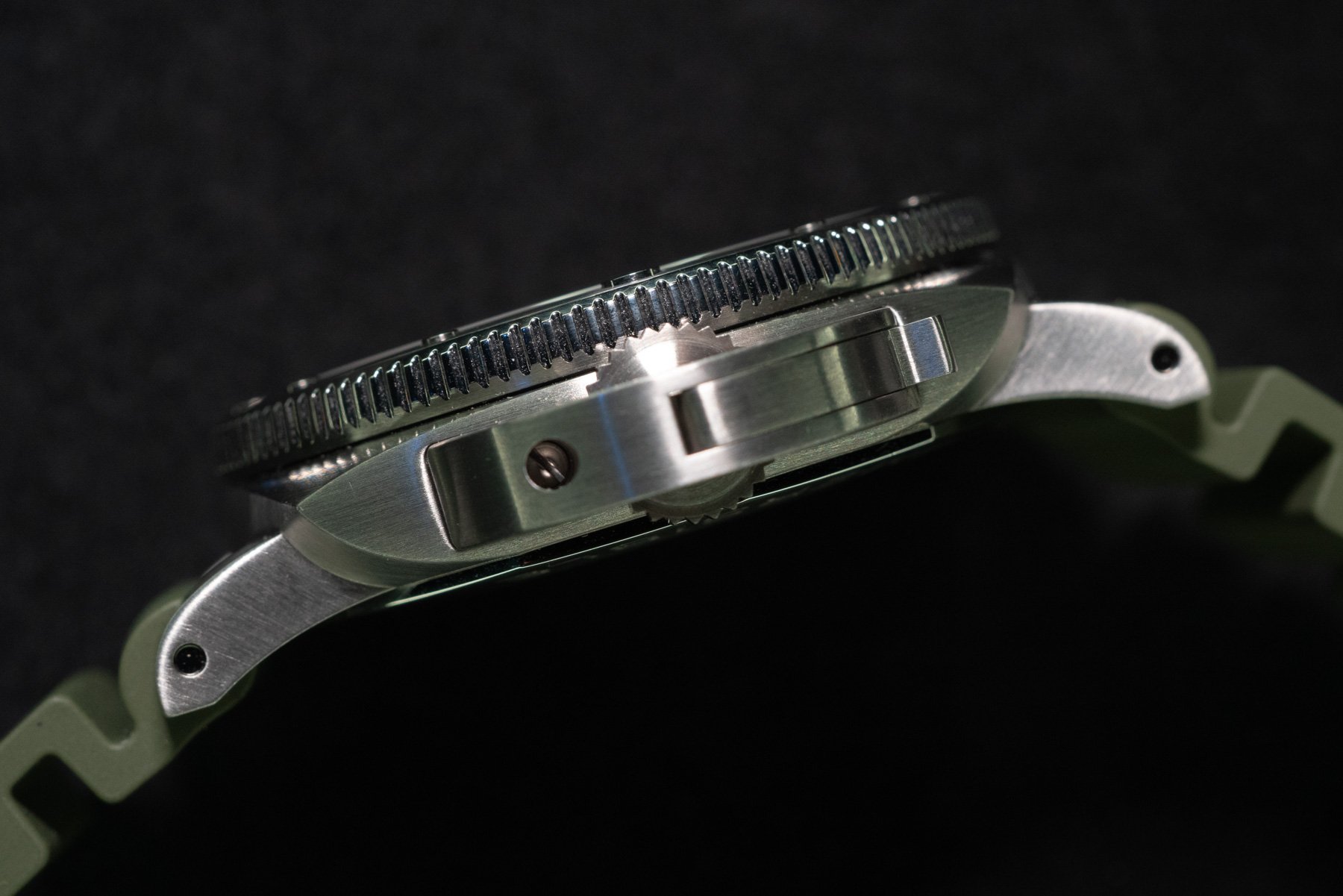 In fact, this case size is not totally new for the Submersible. The first ones from 1998 also came in 44mm cases. In the past, however, I completely ignored the Panerai Submersible, as the design was just not for me. At least, not at the time. When I look back now on the PAM00087, or even the fairly basic PAM00024, I think that they’re pretty cool and handsome watches in hindsight. 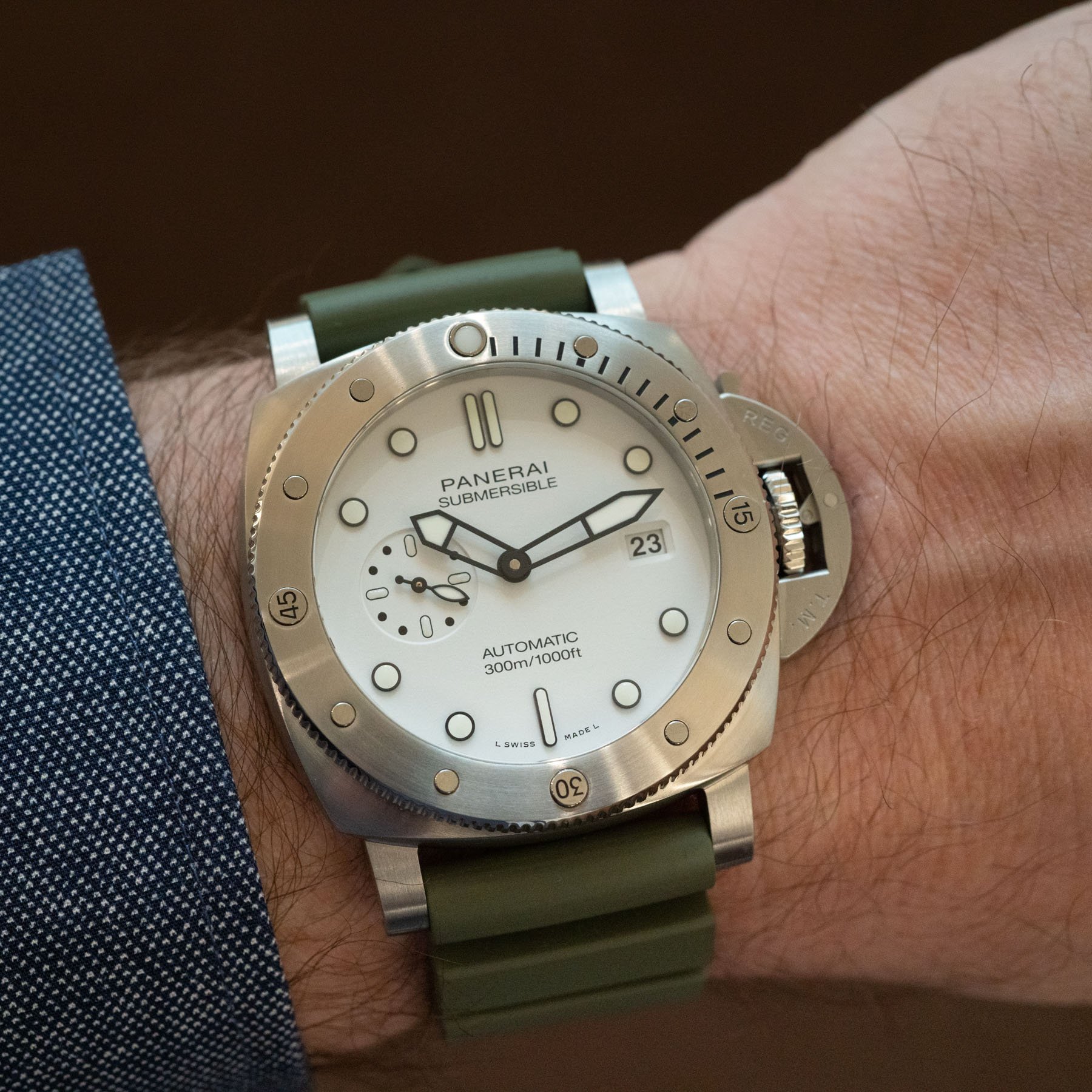 Strapping on the Panerai Submersible QuarantaQuattro Bianco PAM01226 had an effect I didn’t expect. From the get-go, I liked it a lot. And it’s funny because, normally, I tend to stay away from white dials (with some exceptions, of course). But the combination of the steel bezel, the green strap, and the white dial simply works for me. It would probably have been different if the bezel were black ceramic or another contrasting color. The size works perfectly on my 19cm wrist, and I can’t understand why I didn’t try the Submersible watches before. In the past, I would have always picked the Luminor or Luminor Marina, as those models are so tied to the brand’s history. The Submersible, however, looks good and robust, and frankly, the history of Panerai is so “all over the place”, that my purist’s view on this brand has faded a bit. 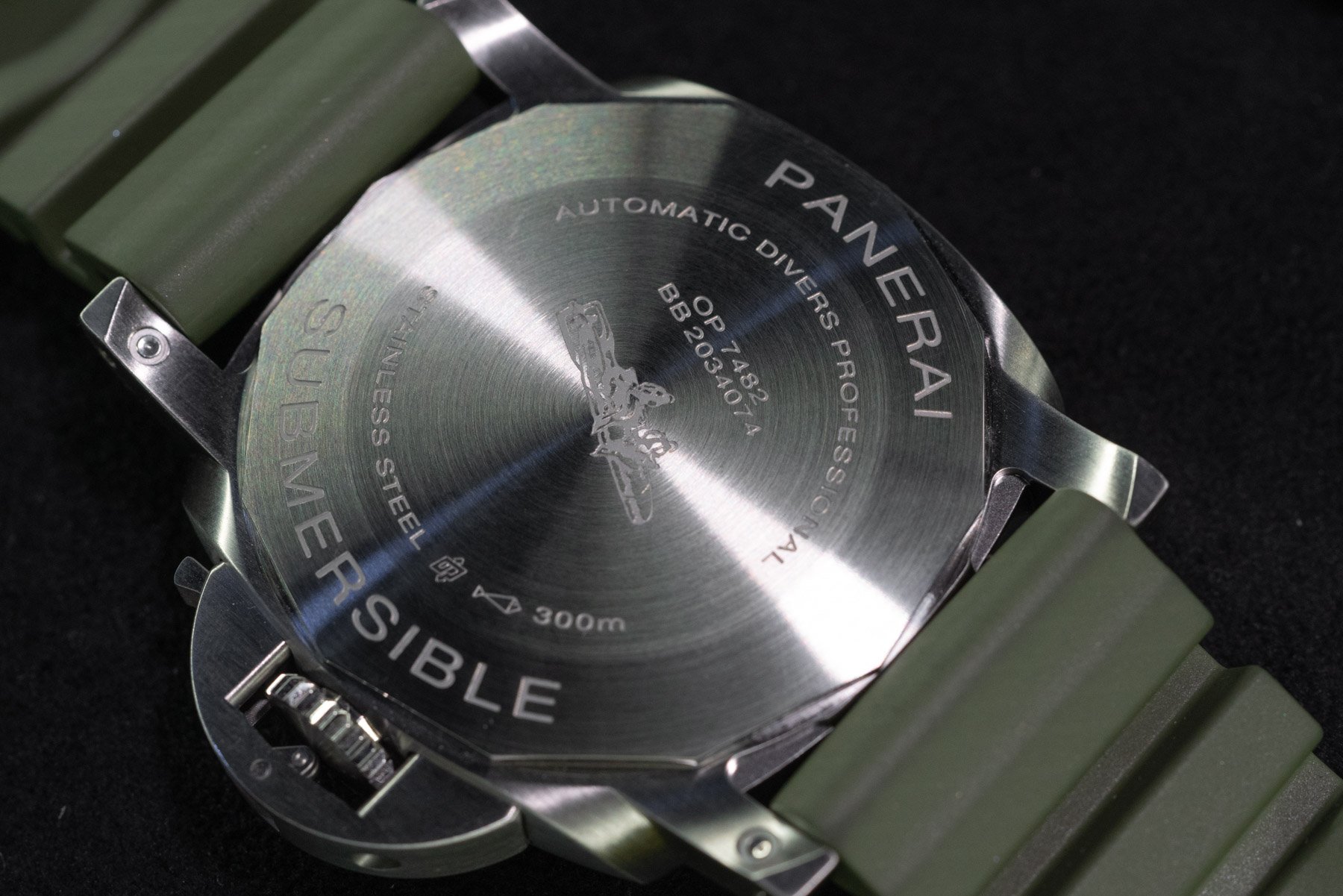 Panerai’s PAM01226 comes on a green rubber strap, which is easy to swap for a different-colored rubber strap or a 24mm leather strap of choice. You don’t need screwdrivers anymore, risking scratches on the case. Just use the quick-release button under the lug to take off the strap. 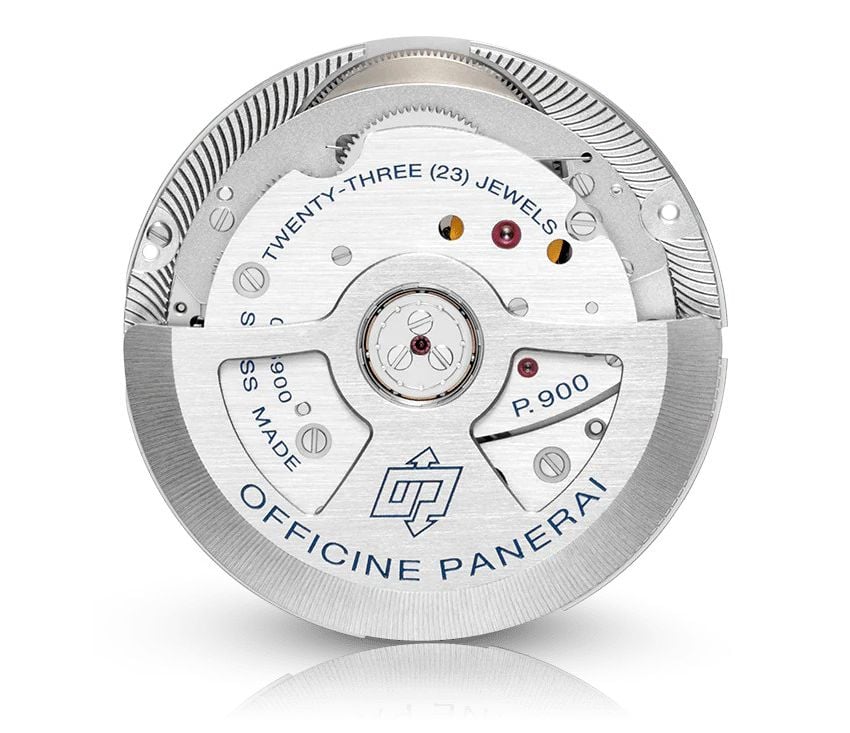 Inside the PAM01226 is Panerai’s caliber P.900. This is not an in-house-developed movement, but rather a Richemont Group movement found in other watches from the group’s brands. At this price point, a true in-house movement would have been nice, but I am also of the opinion that the whole “in-house” thing is rather overrated. During the introduction of this model (but this also applies to some other Panerai watches), the biggest complaint was that Panerai is using the P.900 in a watch with this price tag.

Small update: Perezcope let us know an important “detail”. The movement inside this PAM01226 is apparently not the decorated one that I showed first. The movement is not visible anyway, and the performance of the movement will not be affected, but (especially) at this price point, you should expect some proper decoration on the movement. It doesn’t change my verdict on the watch, as I simply like the aesthetics of the watch, and I feel that this is what Panerai is mainly about in the first place anyway. I didn’t care about it when they had the hand-wound Unitas movements, and I don’t do now. When a movement is of importance to you, this watch might not be for you then. 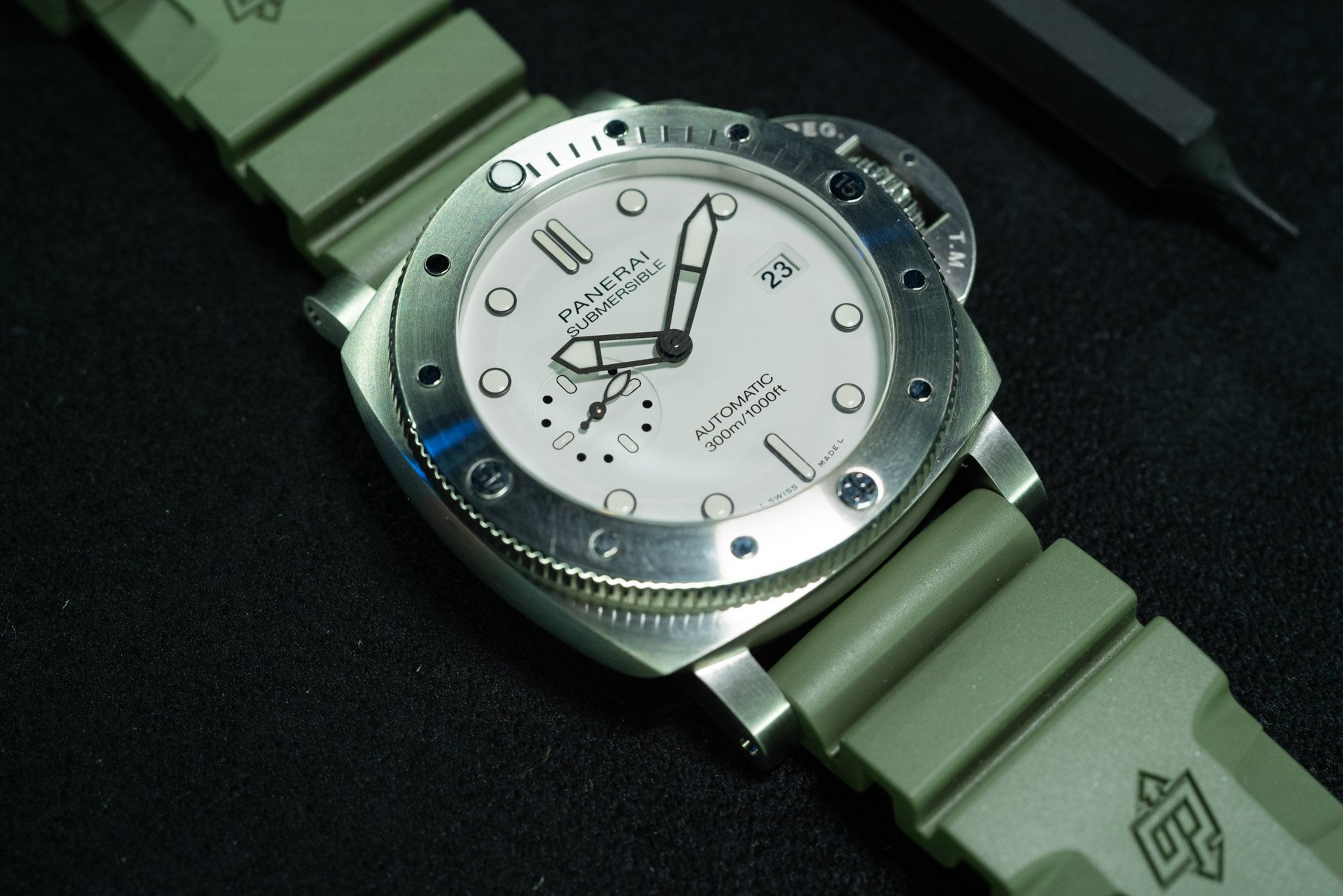 Not really bothered by it

But aside from the movement, and in the case of Panerai, the P.900 caliber is not something I am truly bothered by anyway. I simply love the looks of this watch. I do feel the price tag of €9,200 is a bit steep, but purely based on aesthetics, this was a nice surprise for me from the Florentine brand. During Watches And Wonders, we (our team) joked that nearly everything there had a price tag of at least five digits. Suddenly, €9,200 sounded like a bargain. 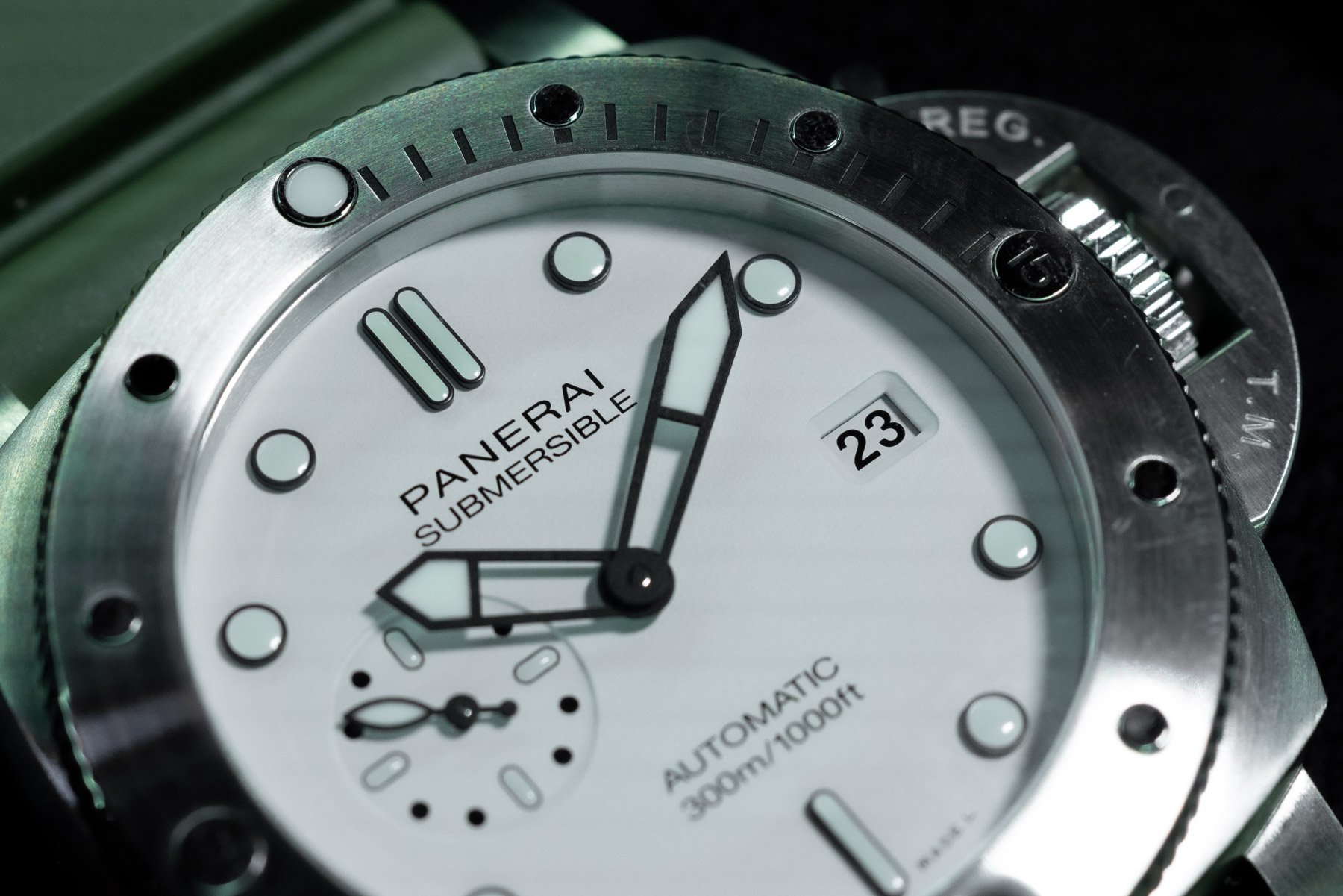 It’s mainly the clean white dial in combination with the large case and bezel in 316L steel that makes me want to wear the PAM01226. The green rubber strap adds a bit of that military or utilitarian flavor. The only thing I am not sure about is the date aperture. There’s a little beveled step around the date window, probably because the date disc sits deeper than on other models. I could have done without a date altogether, but to me, it’s a minor thing and definitely not a dealbreaker in this case.

Just as the white-dialed PAM00113 pulled me in nearly 20 years ago, this white-dialed PAM01226 might be my re-entry into the Panerai brand. As always, we’d be interested to hear what you think of this model. Feel free to drop your thoughts in the comments below.