A watch like a Schubert piano sonata: perhaps a bit dull at first, but just give it some time
Lex Stolk
comments 19
Share

I talked about the black Omega Seamaster Diver 300M Chronograph in the previous installment of “The Best Boring But Brilliant Watches In The World”, but now it’s time for something completely different. The Patek Philippe Calatrava. The Calatrava started out as a humble dress watch, but it also has a more outgoing and exuberant side that might surprise you. However, at heart, a Calatrava remains a very traditional and soft-spoken creation.

Forgive me for sounding pretentious, but a classic Patek Philippe Calatrava reminds me a bit of a Schubert piano sonata. If my dad reads this, he would be proud, because it’s proof he didn’t play me all that classical music for nothing when I was still a young lad. Anyway, Schubert’s piano sonatas were discarded for a long period of time because they were not of the same (extremely high) standard as the piano music Beethoven composed. As a kid, I preferred Beethoven to Schubert by a long stretch even though I was by no means an expert or could tell exactly why. To the music world, Schubert’s work lacked the structural complexity and emotional substance Beethoven put into his sonatas. To put it plainly, it was considered boring. 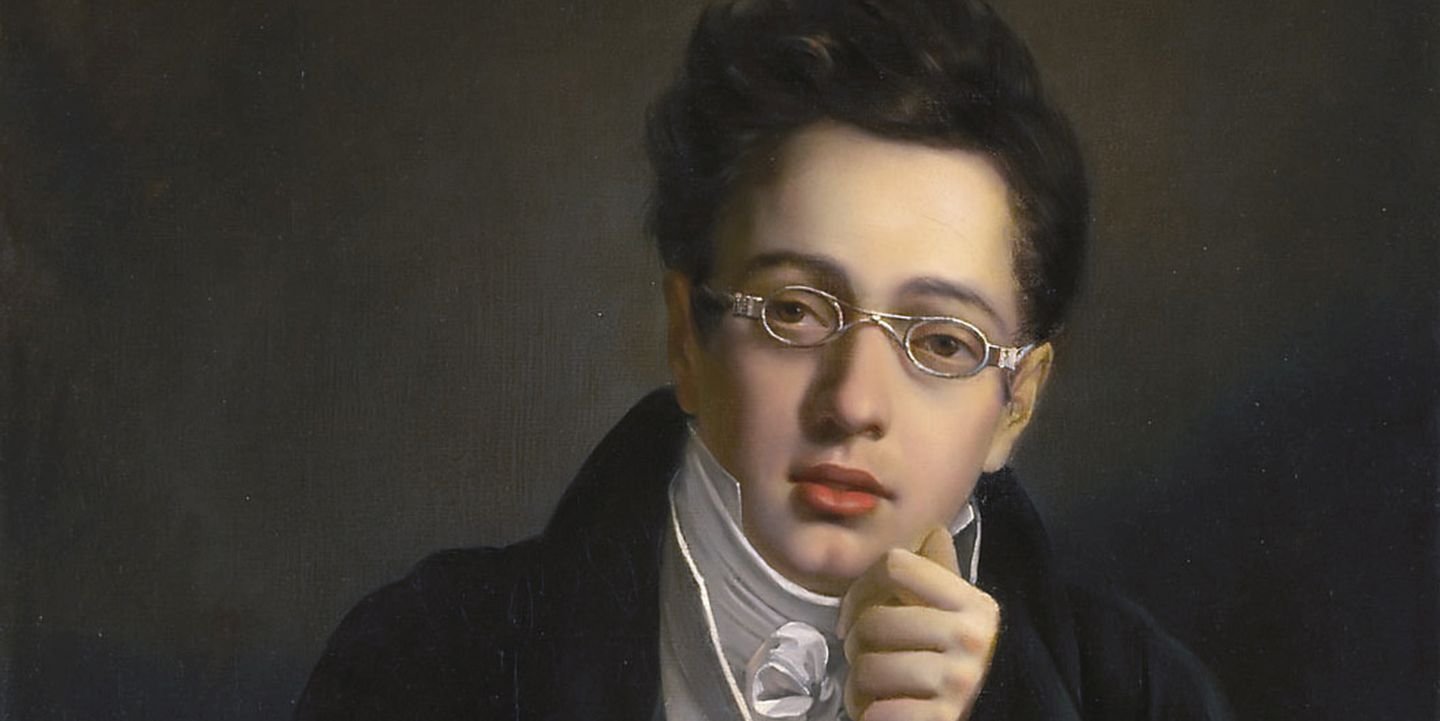 Still rambling on about Schubert?

Please allow me to continue about a long-gone Austrian composer just a bit longer, just to make my point regarding the Calatrava. Schubert’s last three piano sonata’s he wrote a couple of months before his death in 1828, D. 958, 959, and 960, were not even published until about ten years after his death. But times change. And so by the late 20th century, Schubert’s piano sonatas — particularly those last three — were considered masterpieces and important milestones in piano music.

Some people are easily bored, and seek entertainment and fulfillment in large theatrical statements.

Times change and people change too. Maybe someone stubbornly kept playing Schubert, discovered the hidden geniality, and became an avid advocate for the composer’s work. Some people are easily bored, and seek entertainment and fulfillment in large theatrical statements. Schubert fans find beauty in the little things. 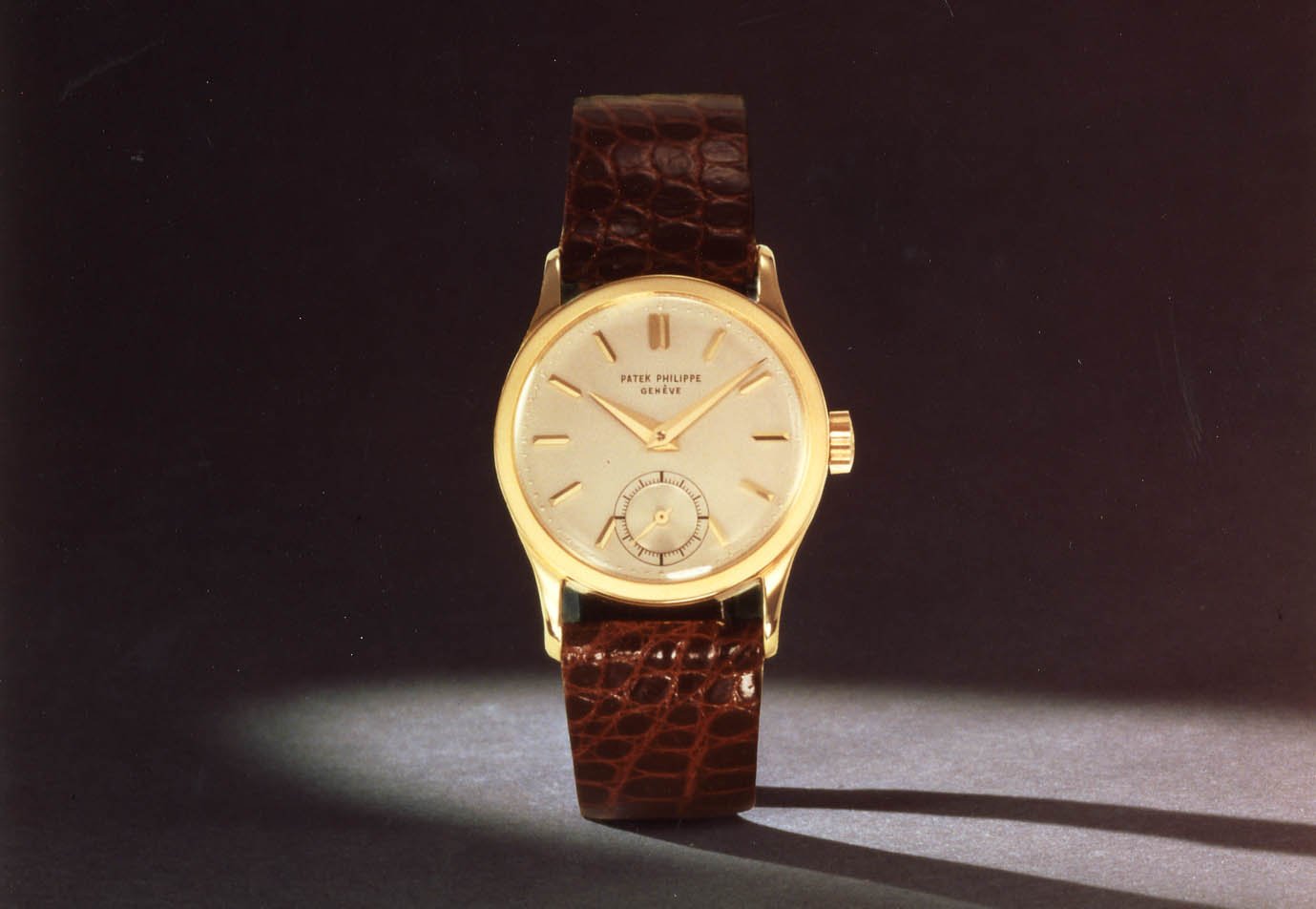 The Patek Philippe Calatrava is not a theatrical Beethoven piano sonata because it doesn’t blow you away instantly. The Calatrava’s beauty is more subtle, it’s a soft whisper instead of an in-your-face scream. It requires a bit more perseverance and training to appreciate this more subdued beauty. But once you do, you will never lose your love for it. Savoring a soft-spoken Calatrava is a slow process. A private and intimate affair. If you put a little effort into it, the classic dress watch will slowly get a hold of you and capture your horological heart forever.

… this watch set the tone for introvert, sublime, and elegant timepieces made for discerning gentlemen.

There’s no denying the allure of the watch that was first launched in 1932. The Philippe Calatrava Reference 96 is the first dress watch ever — though the experts have yet to agree about that. This watch set the tone for the introvert, sublime, and elegant timepieces made for discerning gentlemen. A watch that works best with formal attire, but which can also hang loose once you are familiar enough with it. 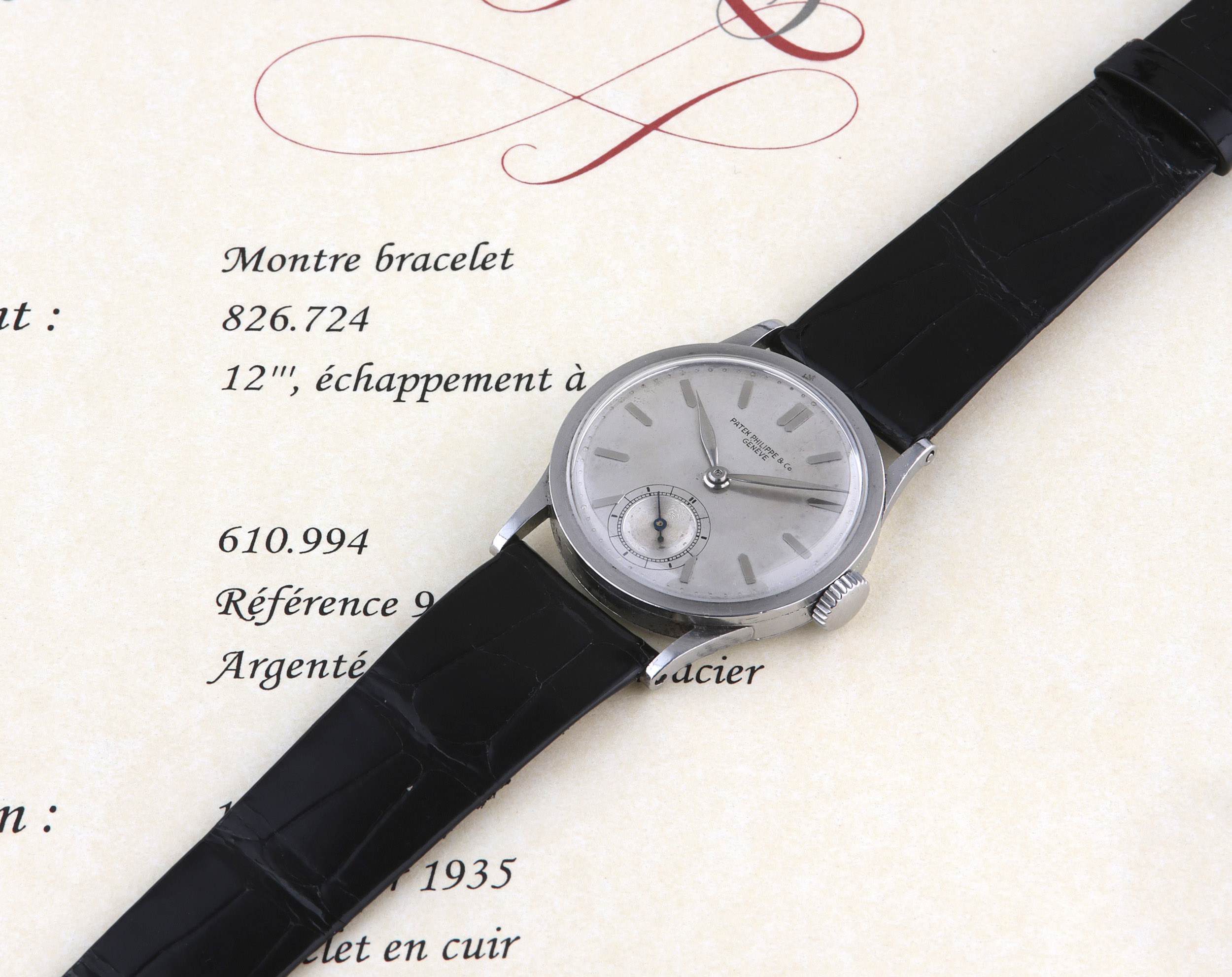 A 1933 Reference 96 in steel – Picture courtesy of Antiquorum

Believe it or not, Patek borrowed the Bauhaus principles of form follows function, to end up with a minimalist watch design. When David Penney designed the Calatrava, he tried to find the essentials of time and display them in their purest form. And he succeeded. The resulting reference is a no-thrills watch without distracting finery. A whole 89 nine years later, the concept at the core of the classic Calatrava dress watch has remained basically the same. 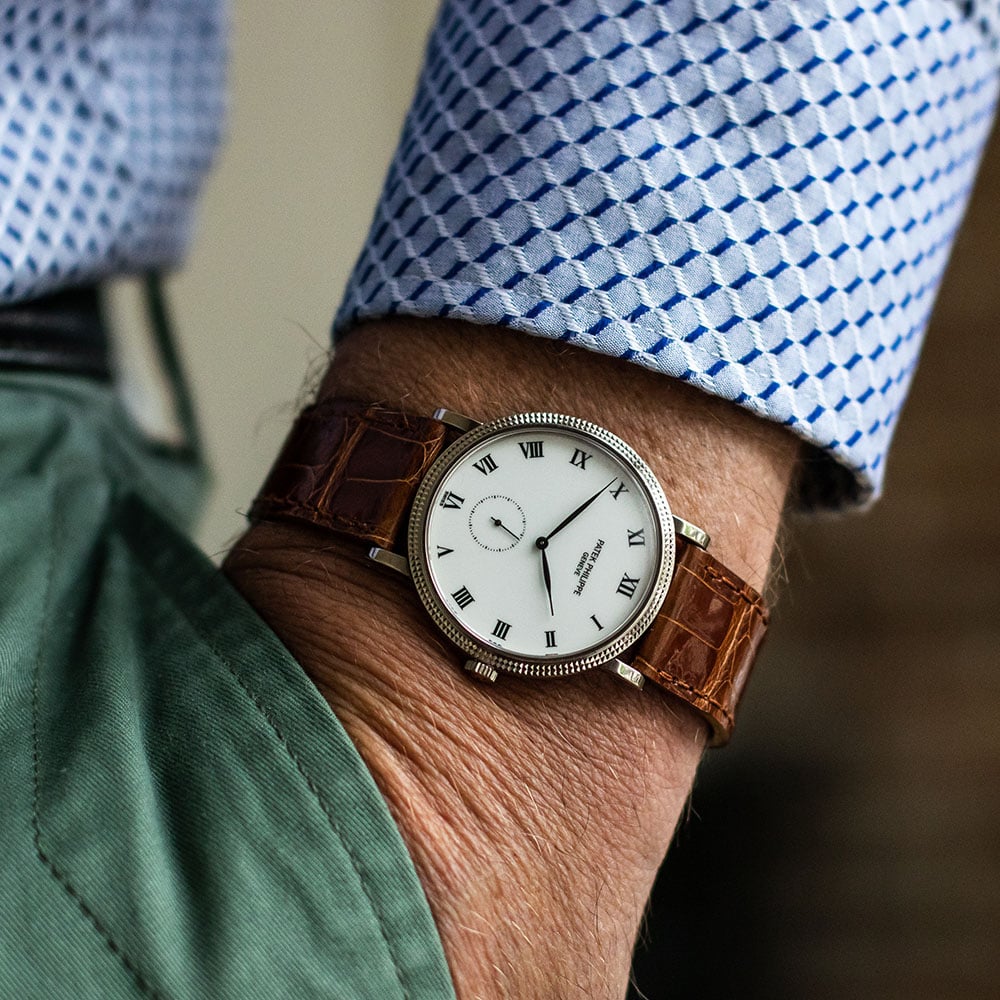 One of the greatest Calatravas ever

Amongst the greatest Calatravas ever is the Ref. 3919 with its bezel decorated with a Clous de Paris pattern. This 33.5×6.5mm iteration came to the market in 1985 and was in production for over twenty years in three different shades of gold. It has a certain old-fashioned look, but using that terminology would imply being outdated. The Ref. 3919 is certainly not outdated — it’s timeless. A term that has been abused too much in the watch industry to still carry any real meaning. Still, 33.5mm is not a common size nowadays. That’s why Patek recently introduced the two versions of the 39mm Ref. 6119. 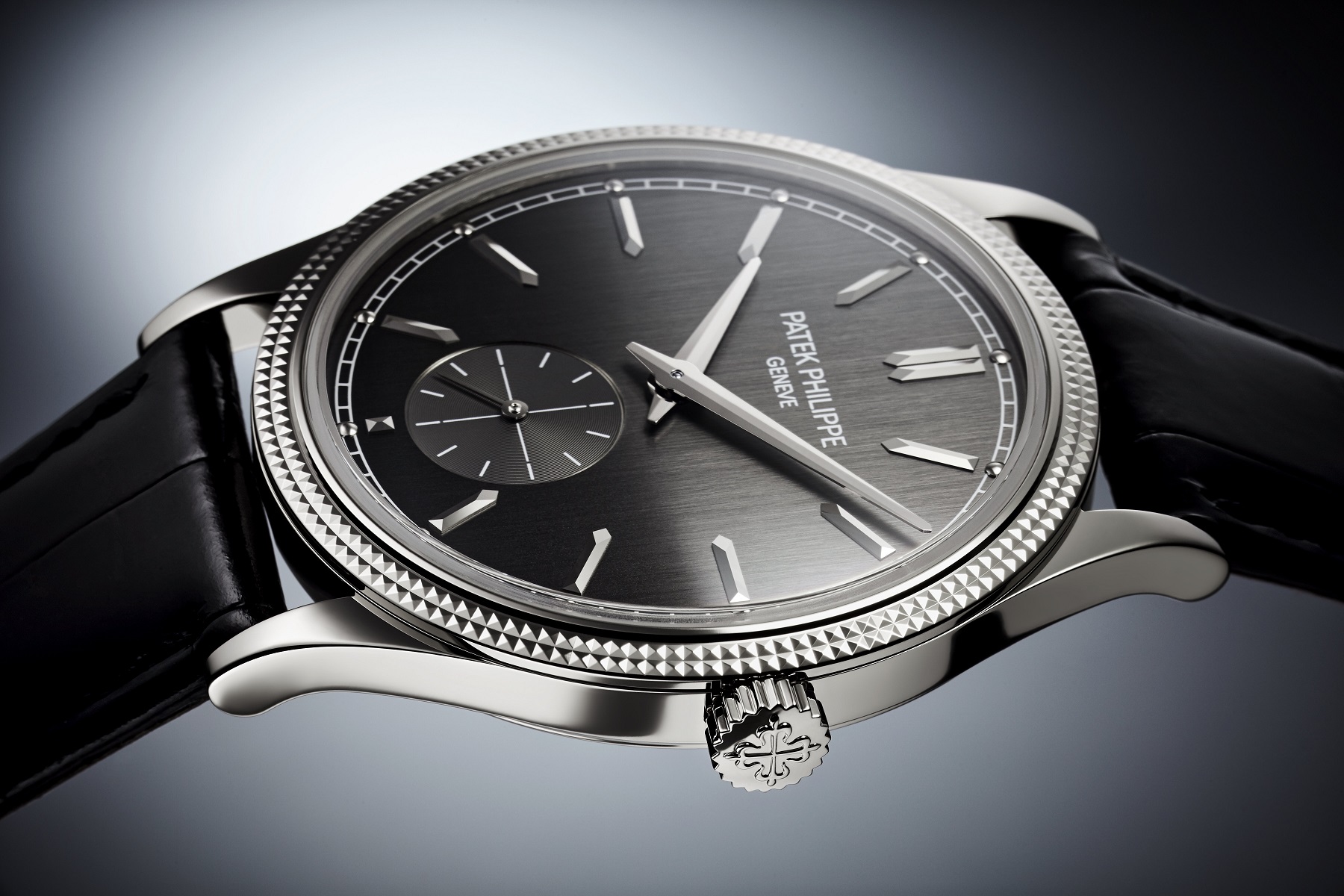 Both new Calatravas are direct descendants of the illustrious Ref. 3919. The Ref. 6119R-001 in rose gold has a silvery grained dial with applied hour markers and hands in rose gold. And the Ref. 6119G-001 in white gold features a charcoal gray dial with a vertical satin finish, a snailed small seconds dial, plus applied hour markers and hands in white gold.

And because the love for the Calatrava goes deeper than just what’s on the outside, it’s good to know that the hand-wound movement inside the 8.43mm tall case is the new 30.4×2.55mm caliber 30-255 PS. Because of its two barrels, the power reserve is 65 hours. Aside from being beautifully finished to the highest, self-imposed Patek Philippe standards, it’s also functional thanks to the “hacking”, or seconds-stop function. 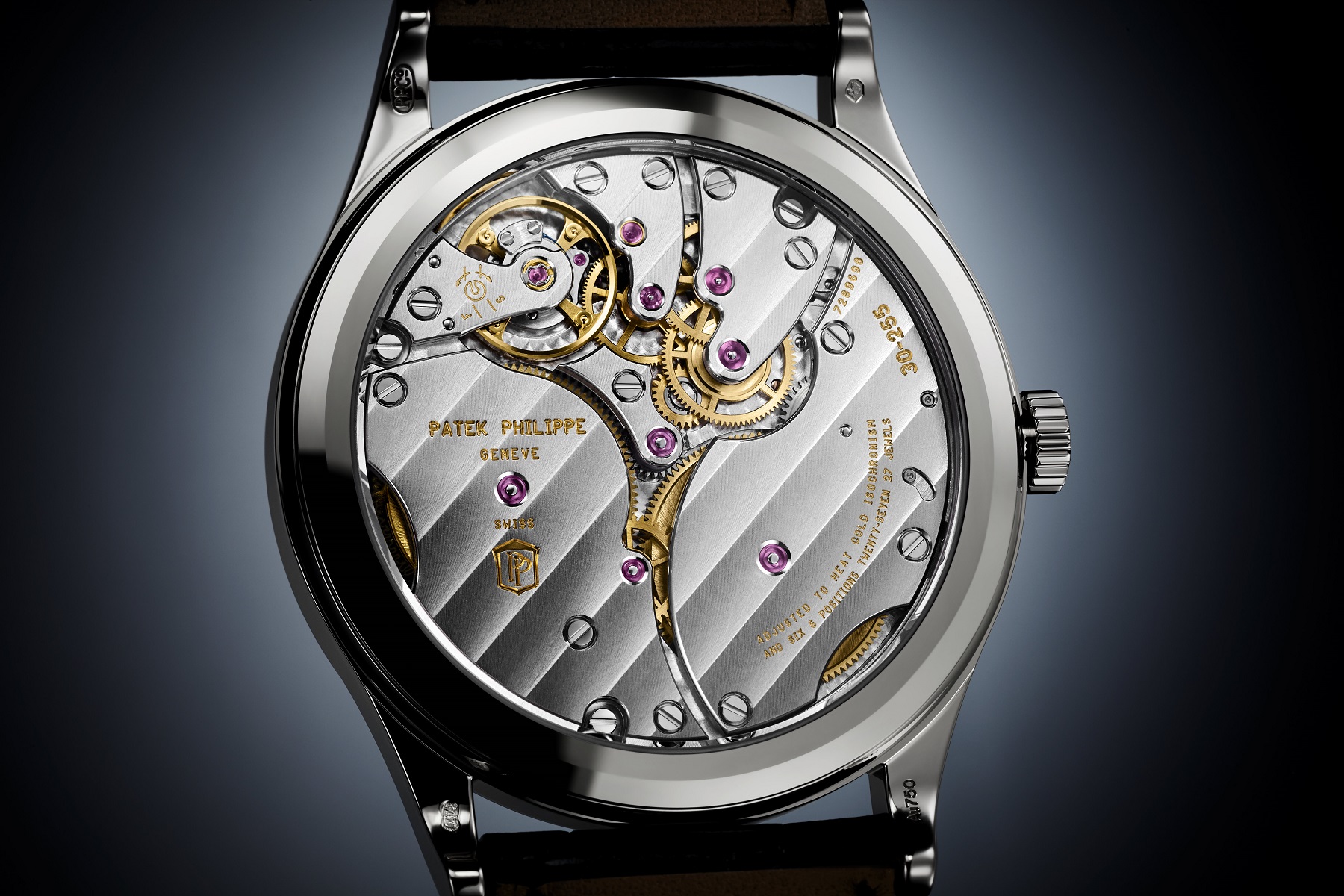 An intermezzo in steel

In 2020 Patek Philippe presented the steel Calatrava Ref. 6007A-001. A limited-edition of 1,000 pieces — that’s right, a veritable limited edition and not a limited production you would expect from Patek — to commemorate the opening in 2019 of the company’s latest addition to its manufacture in Plan-les-Ouates, in the outskirts of Geneva. In comparison to a regular Calatrava, this blue-dialed model is pushing the envelope when it comes to not being boring. 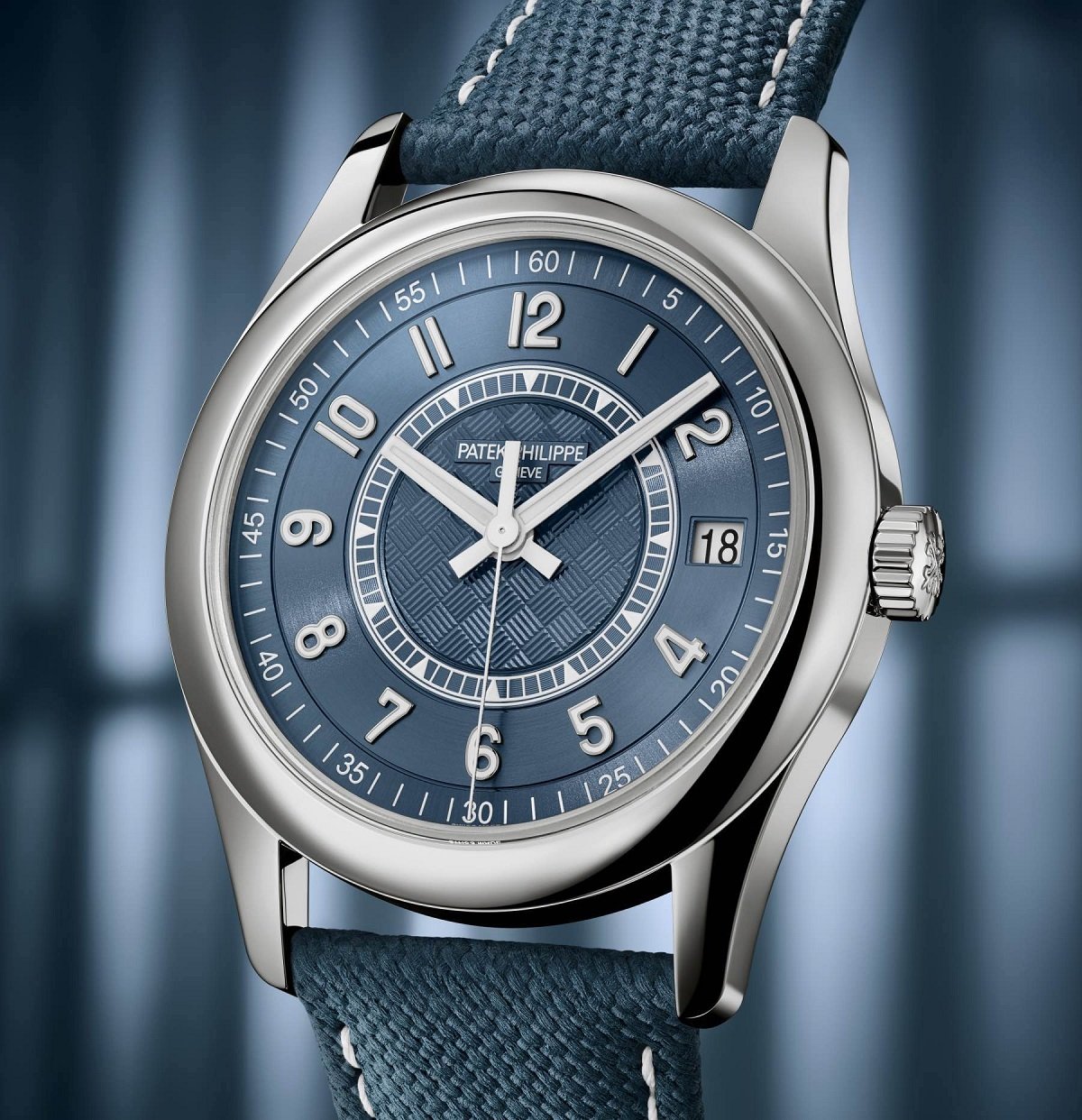 Hell, there’s even Super-LumiNova in play! But Patek Philippe can do much wilder stuff when it comes to taking the Calatrava out of its comfort zone. I don’t hear Schubert when I look at this fresh-faced and even sporty-looking Calatrava. What do you hear? “Rhapsody in Blue” by George Gershwin? A rather jazzy composition with a wild piano arrangement, but classical music nonetheless. 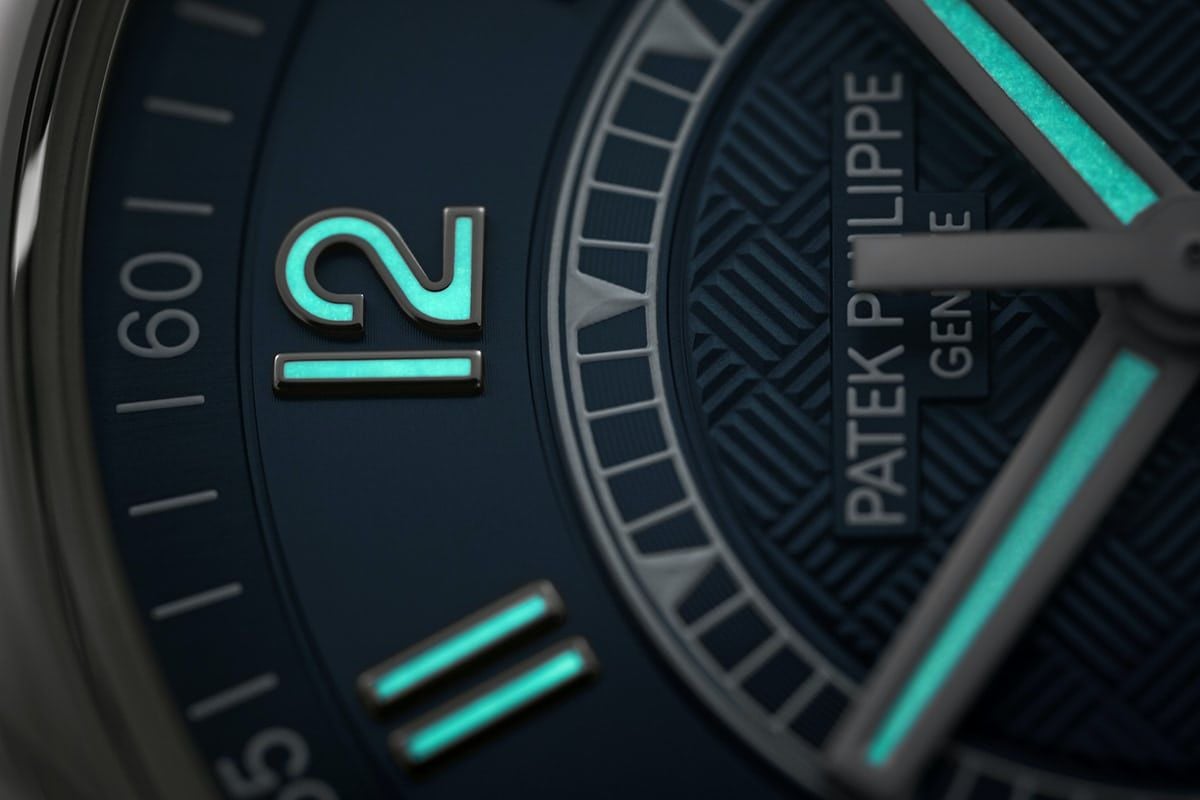 A glow-in-the-dark Calatrava, but still a Calatrava

Presto Agitato on the dial

Beyond blue is the following trio of colorful Calatravas Patek Philippe presented earlier this year in the Métiers d’Art Collection. These watches have more in common with the third movement, the Presto Agitato, of Beethoven’s Piano Sonata No. 14 in C-sharp minor, marked Quasi una fantasia, Op. 27, No. 2. We all know this piece of music by the name “Moonlight Sonata” given by a critic after Beethoven’s death. The first part of the sonata is calm and highly hypnotizing and is the most played part. The third part is wild, fast, and very virtuous. Playing this music is as complicated as crafting the enamel-dialed Ref. 5089G-10 “School of Fish”, but as majestic (when properly executed) as the synchronized movements of a large shimmering school of fish. The dial, with gold filament separating the different-colored enamel-filled compartments, is a visual explosion. 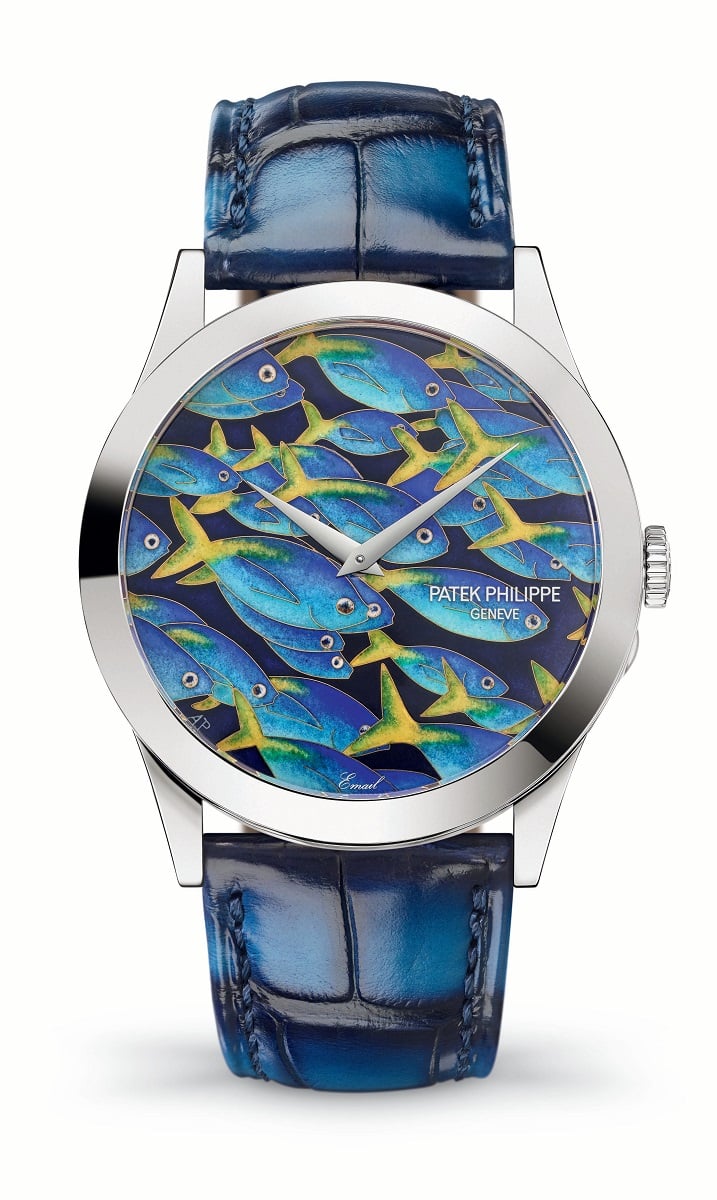 Going Medieval on your Calatrava

Patek Philippe’s Rare Handcrafts department went Medieval on the Calatarva and that resulted in the hypnotizing Ref. 5177G-023 “Medieval Ornaments I”. The dynamic shapes on the cloisonné enamel dial are extremely delicate and complicated. This white gold Calatrava is equipped with the in-house caliber 240 with a micro-rotor, just like the one that beats within the Ref. 5089G-10 “School of Fish”. 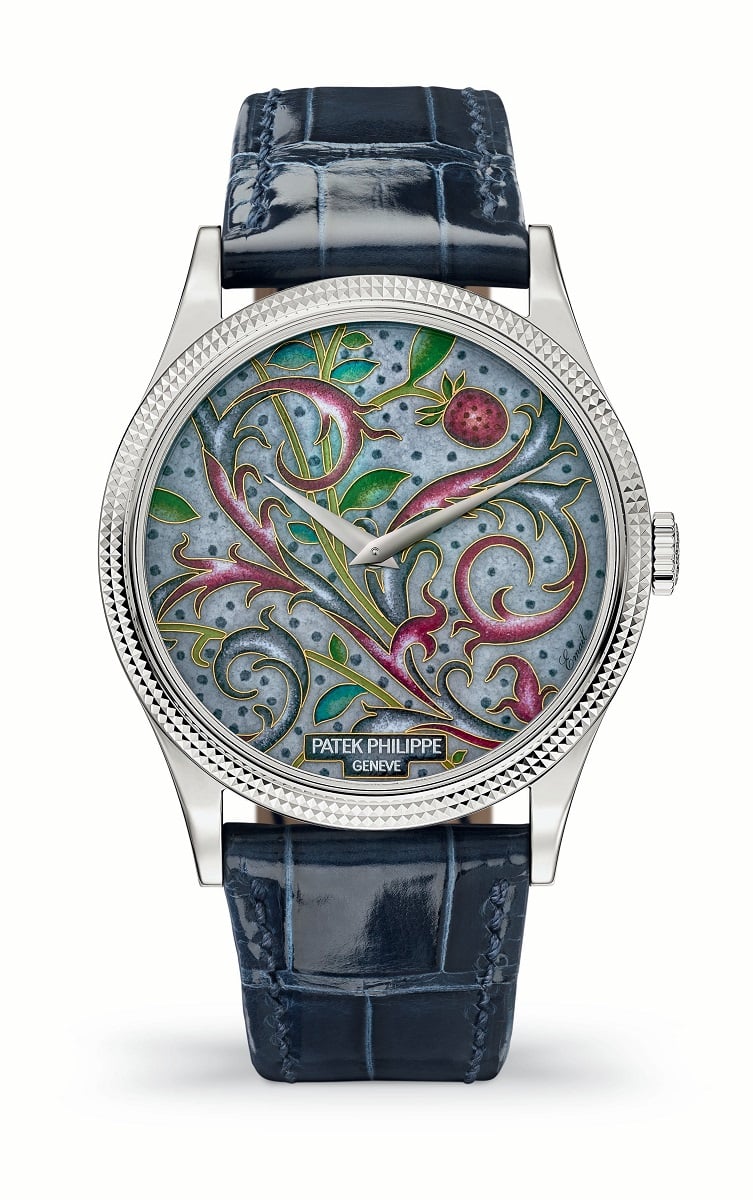 This movement also beats in the Ref. 5177G-024 “Falcon Head”. No enamel this time, but wood marquetry to create a very lively looking bird of prey. It takes 168 minuscule pieces of wood and 200 inlays using 20 different types of wood, including maple, boxwood, bur walnut, and gray poplar, to create the image of the falcon. 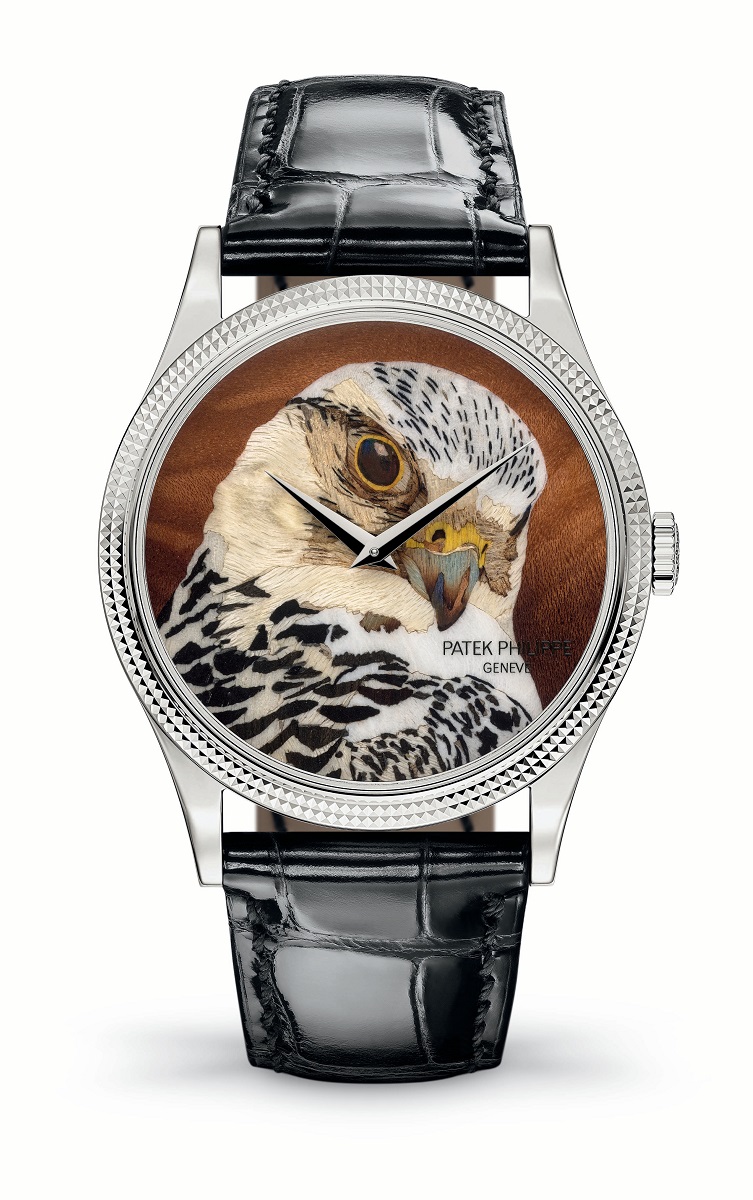 Shifting the mood from classical music to symfo

After comparing the ultimate dress watch we know as the Patek Philippe Calatrava with Schubert, I now think it’s safe to say that at least some Calatravas can be like Beethoven. And after looking at the latest extravert and intricate creations from the Rare Handcrafts department, I feel like listening to some Dream Theater. Who would have thought?

To found out exactly which Calatrava’s are part of the current collection, please visit the official Patek Philippe website.