I thought the Royal Oak Jumbo (or “Extra-Thin”) had hit its peak a few years ago, but it clearly hadn’t. Prices are going through the roof, as you will see in this article.

I’ve been writing about the Royal Oak (and the Jumbo in particular) a lot over the years here on Fratello. It was my dream watch for a long time, I had a few Royal Oak variations, including the 15202 “Jumbo” and I saw the development of the market value from roughly €7,000 to €40,000. In a period of 15 years, I have to add.

For this series, we select pre-owned watches from Chrono24, the largest online marketplace for watches in the world. In today’s article, I included the 15202 similar to the model I had in my own collection, the same 15202 with a white dial, the 15202 that is still in the collection today, the 14802 that was the jubilee version from 1992 and a very special execution of the 14802 with a salmon dial. These references are all direct descendants of the original Royal Oak designed by Genta, the reference 5402.

Since 2012, Audemars Piguet has the Royal Oak “Extra-Thin” (instead of Jumbo) in the collection with its logo positioned at 6 o’clock. Before, the AP logo was at 12 o’clock. Only the very first 5402 models (A-series and early B-series) had the logo at 12 o’clock). I think AP got rid of the “Jumbo” because “Extra-Thin” connects more with today’s customer. Jumbo was never a name the brand used in its catalog but used by collectors and enthusiasts. Jumbo also doesn’t cover the load anymore, with a diameter of 39mm the watch isn’t that enormous. But it was in 1972 when AP introduced it. The price was (and is) as well, AP never made a secret about that. At the time, you could buy 10 Rolex Submariners for the price of one Royal Oak 5402. 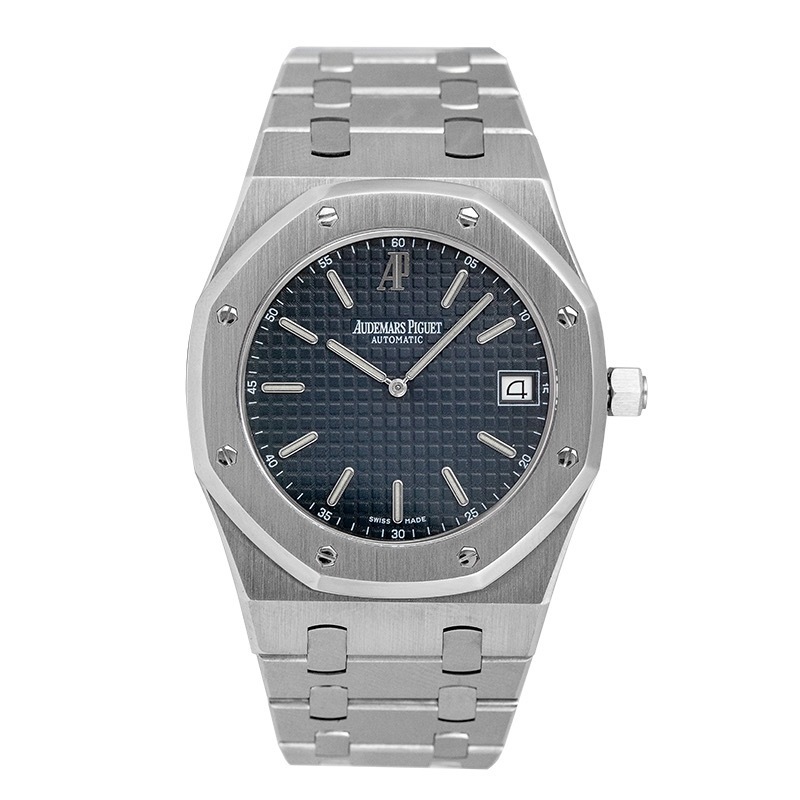 This watch is the model I had as well, exactly the same. The watch has the logo at  12 o’clock. the thin bracelet (single folding) and with the charcoal dial.  It has AP 2121 movement, which we covered in full here. I believe it is one of the best and most beautiful time only movements, period. This watch is in good condition, without scratches or dings. And believe me, if you properly wear it, scratches will appear sooner than later. This particular watch is offered by a seller in the UK, and it comes without paperwork. Now, here’s the thing. You can get a certificate of authenticity from AP, but you need to send the watch to them. The official paperwork is a booklet, that they will only hand out once. So once that is gone, the certificate is the only way to have some official paperwork with your watch. Click here for the offer on this Royal Oak 15202. 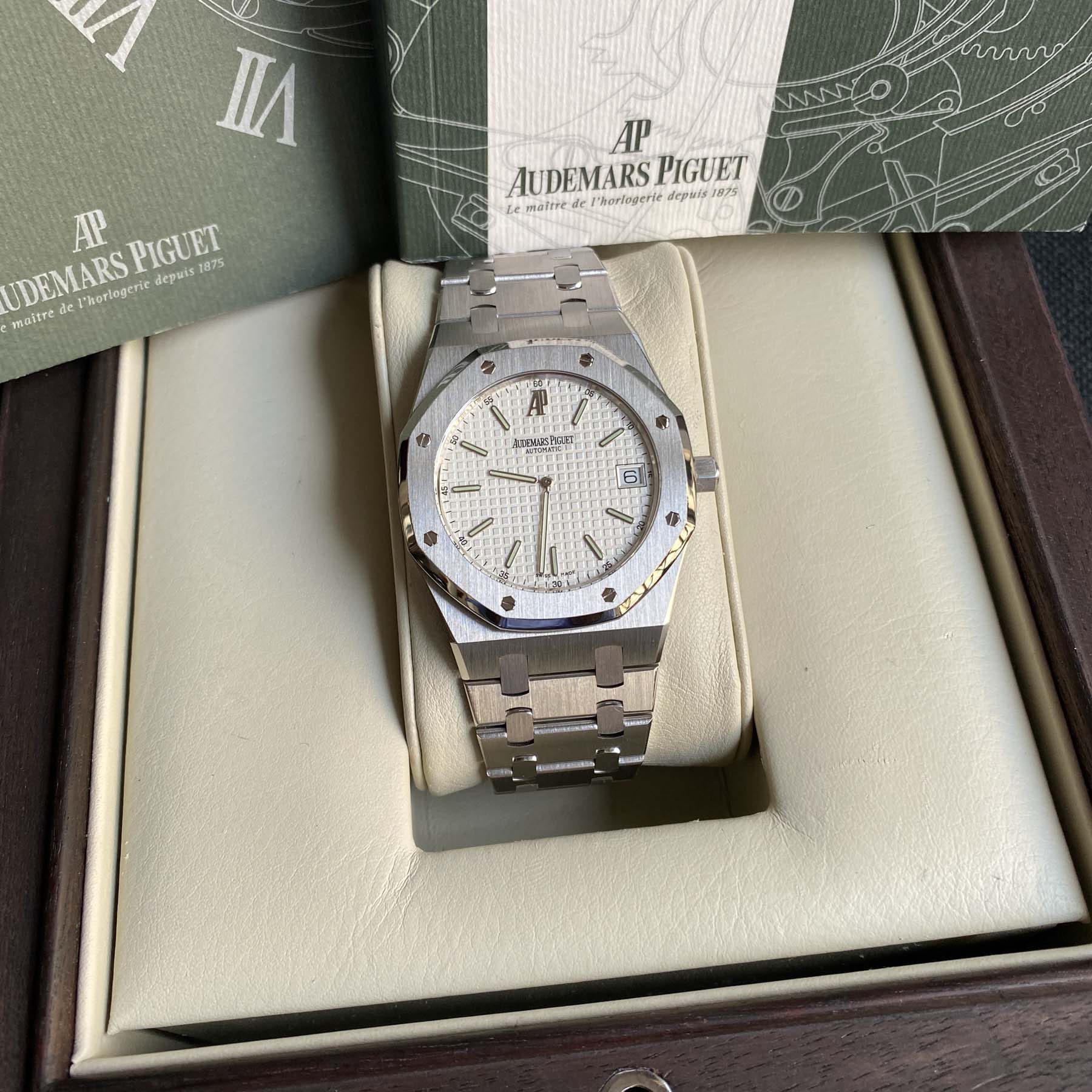 One of my watch buddies had the 15202 with a white dial, but he sold it long time ago. A pity. as I really liked the white dial variation. This particular one comes with box and papers (actually bought at Chronopassion in Paris, an amazing store) from 2008. Aside from the dial, the watch is identical to the one above. I have a weak spot for this white dial version, and I believe AP should make another one in the current line-up of the Royal Oak Jumbo models. It looks good. Unlike the 15300 model from that period (with second hand), this dial is matte white and not the silvery-white you’ll find on other models).  This particular watch is offered by a dealer in France and it is described to be in very good condition. Click here for the offer on this white dial Royal Oak. 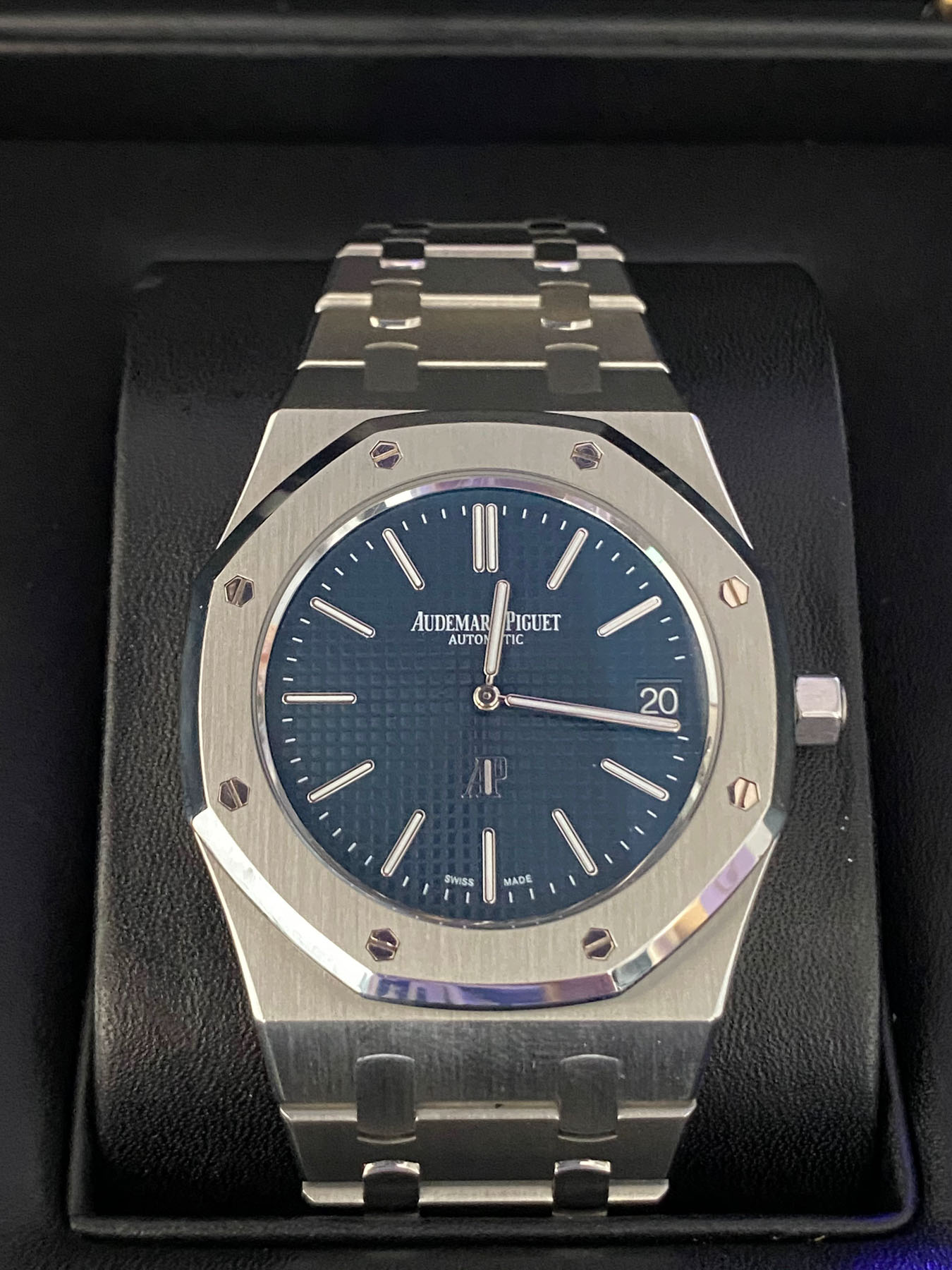 As I wrote earlier on, the Royal Oak Jumbo received an update in 2012. The logo is located at 6 o’clock. but also the dial pattern (“Clous de Paris”) became a bit smaller than before. Much like the 5402 references, or even the 14802 (below) that was introduced in 1992. This particular watch is a pre-owned Royal Oak from the current reference. It looks great, but purists might prefer the older bracelet. This newer bracelet has a double folding clasp, instead of a single fold. The movement is still the 2121, but with minor changes applied. Mainly aesthetical, so no worries. This watch dates back to 2014 and comes as a full set. Click here for this offer on the modern Royal Oak 15202. 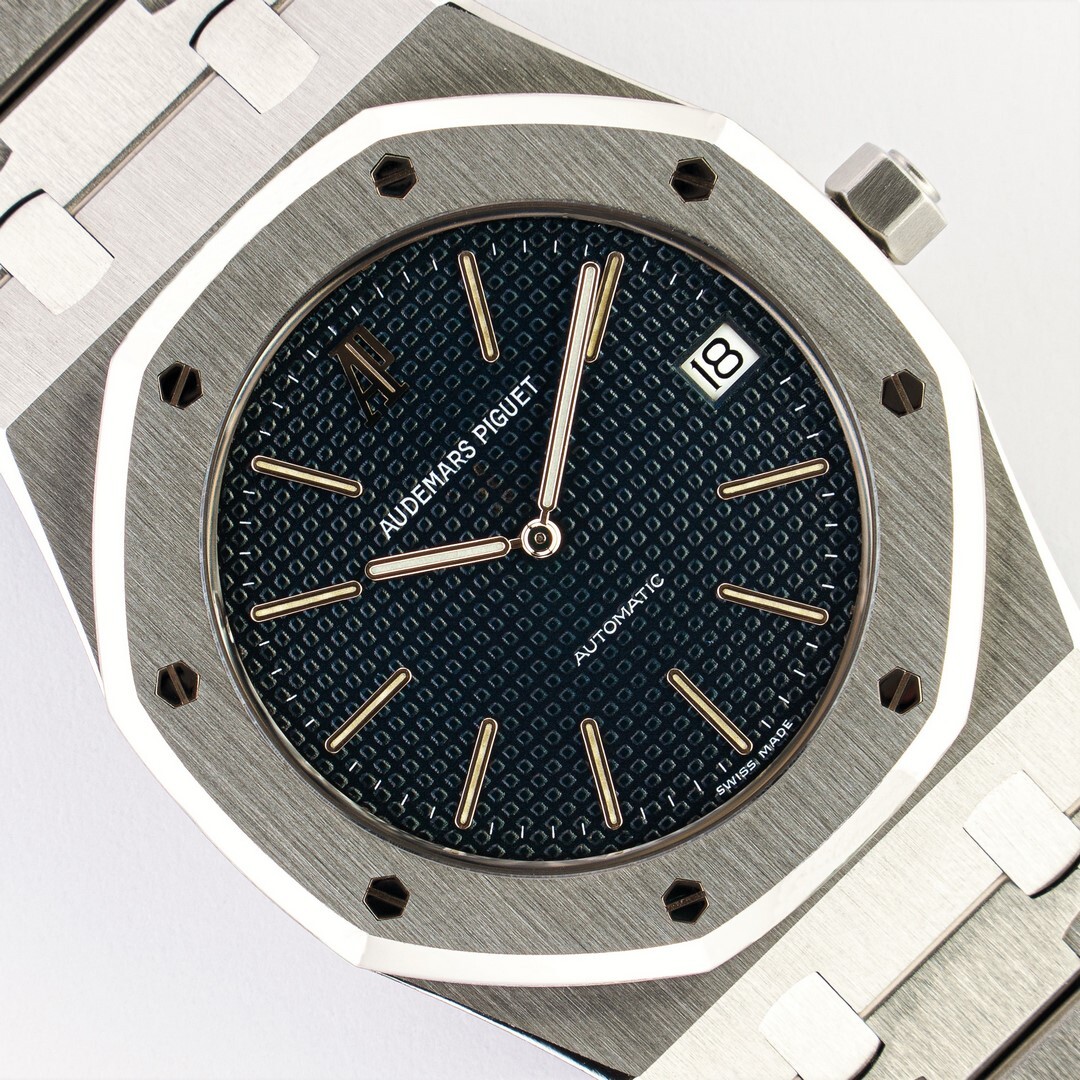 Only 1000 of these watches were produced (starting in 1992, during the 20th anniversary of the Royal Oak), 700 in steel, and 290 in white gold and 10 in platinum. Compared to the current Royal Oak Jumbo, it has different printing on the dial, and the logo at 12 o’clock. The movement is also caliber 2121, but with a special rotor. This watch comes in the wooden octagonal shaped box, and with paperwork (dating the watch to 1993). But, not the original papers, but the certificate of authenticity I mentioned before. This might be my favorite version, although the 5402 would be awesome as well, of course. The downside is that many 5402 watches have seen the unforgiving polishing machine. Click here for the offer on this beautiful 14802. 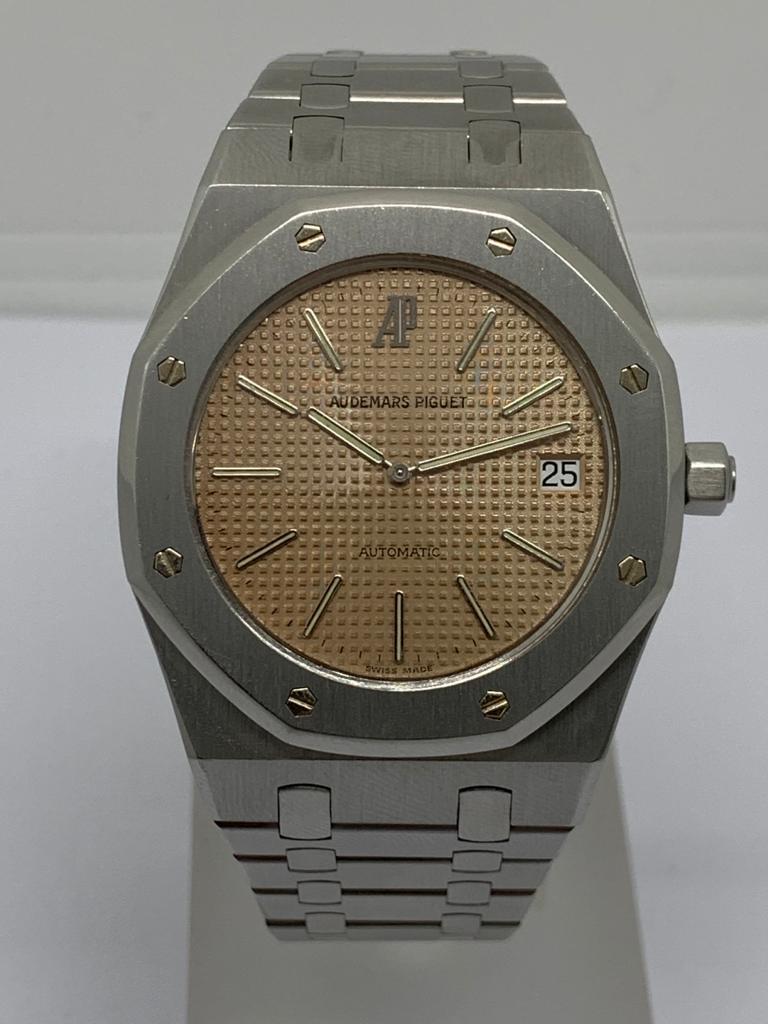 There was one for ages on Chrono24, many years ago, for €15.000,- and it wouldn’t sell. So no, there’s no 0 too much at this price. The asking price is really a  6-digit number for this 14802 in steel with a salmon dial. All specifications are the same as the 14802 with charcoal dial. I included this watch because I simply love this salmon dial. But, and there’s a big but, if you — as a dealer — are asking prices like this, you could at least provide more pictures. And more information. The offer states it comes with box and papers, but they couldn’t add the production year? That’s just lazy. The seller has a high rating though and lots of feedback, but just ensure you do your homework on this one. Click here for the offer on this salmon dial beauty.