QlockTwo by Biegert & Funk – It Is A Quarter To Three

Only once in a while we cover quartz or other electronic watches. We don’t have anything against them, but it should be something interesting or special to give them any coverage on Fratello Watches. We love mechanical watches, but some times there are quartz watches that deserve a bit of attention too. Whether it is about their functionality or their design, or a combination of these two, it has to be something special. Watches (and clocks) we ran into a couple of times that fall into this category are those made by designers Biegert & Funk, called QlockTwo.

Their watches and (wall) clocks work according to the same principle: to indicate time in written words. The dials of these watches and clocks appear to be a matrix with words, or better yet, letters. On the side of the watch you will find a pusher that will illuminate the words needed to indicate the time. Below, you see an example of one of their watches, the QlockTwo Golden Words. All of their watches have a 35mm x 35mm case and are 9mm thick. They are either delivered on a metal Milanese bracelet or a strap. 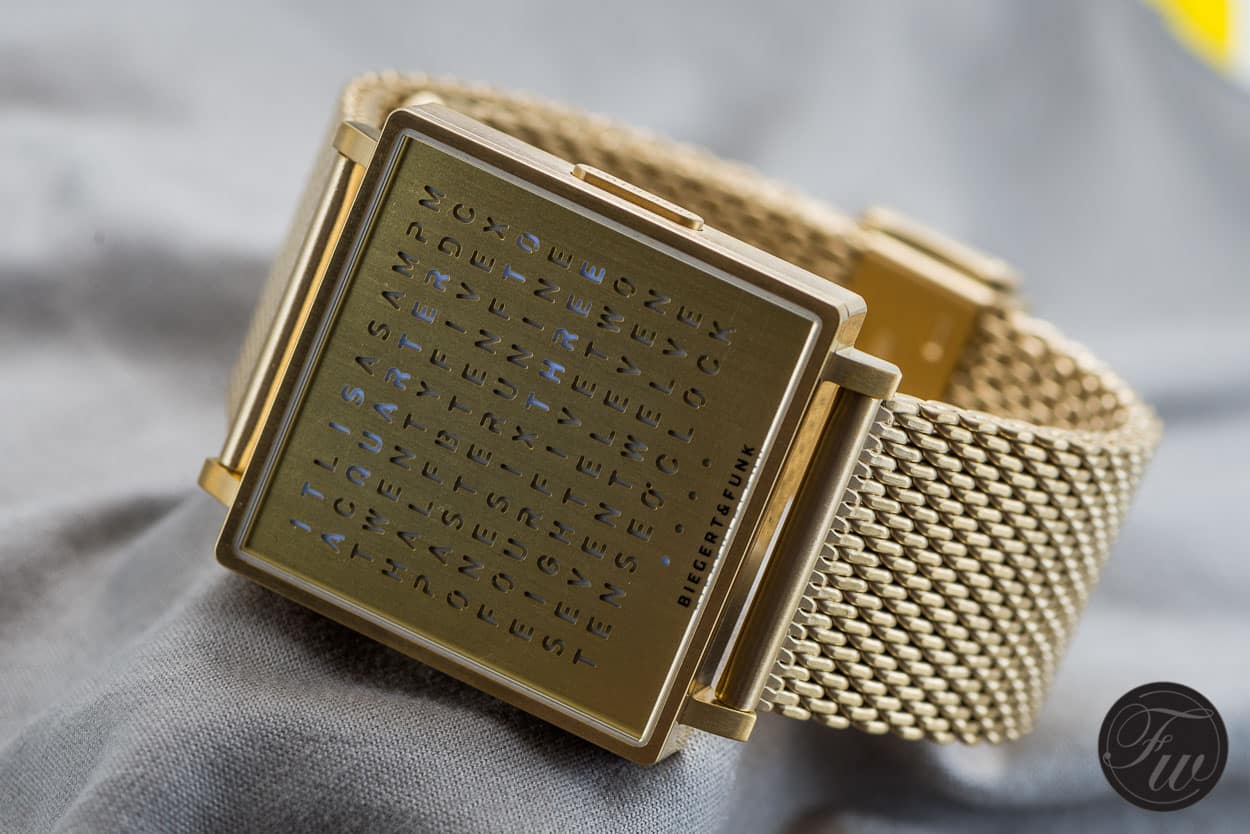 A quarter to three – QlockTwo

Biegert & Funk’s wrist watches are called QlockTwo W. Where W stands for watch, we assume. There are a bunch of variations out there, from stainless steel to rose gold and version in entirely white or black. The time is being indicated using 114 illuminating units using LED technology and there are 110 letters on each dial. As you’ve probably noticed on the image above, the time is being written in increments of 5 minutes. This does not necessarily mean you will miss your bus, train or appointment. The 4 little dots at 6 o’clock (which is an analogue way to indicate something is on the lower part of a dial) indicate the minutes. Not only that, but the watch is also capable of indicating the date in words (press the pusher twice) and to indicate the actual seconds (press the pusher three times). The dials are available in German, English, French, Spanish, Italian, Dutch and Arabic. 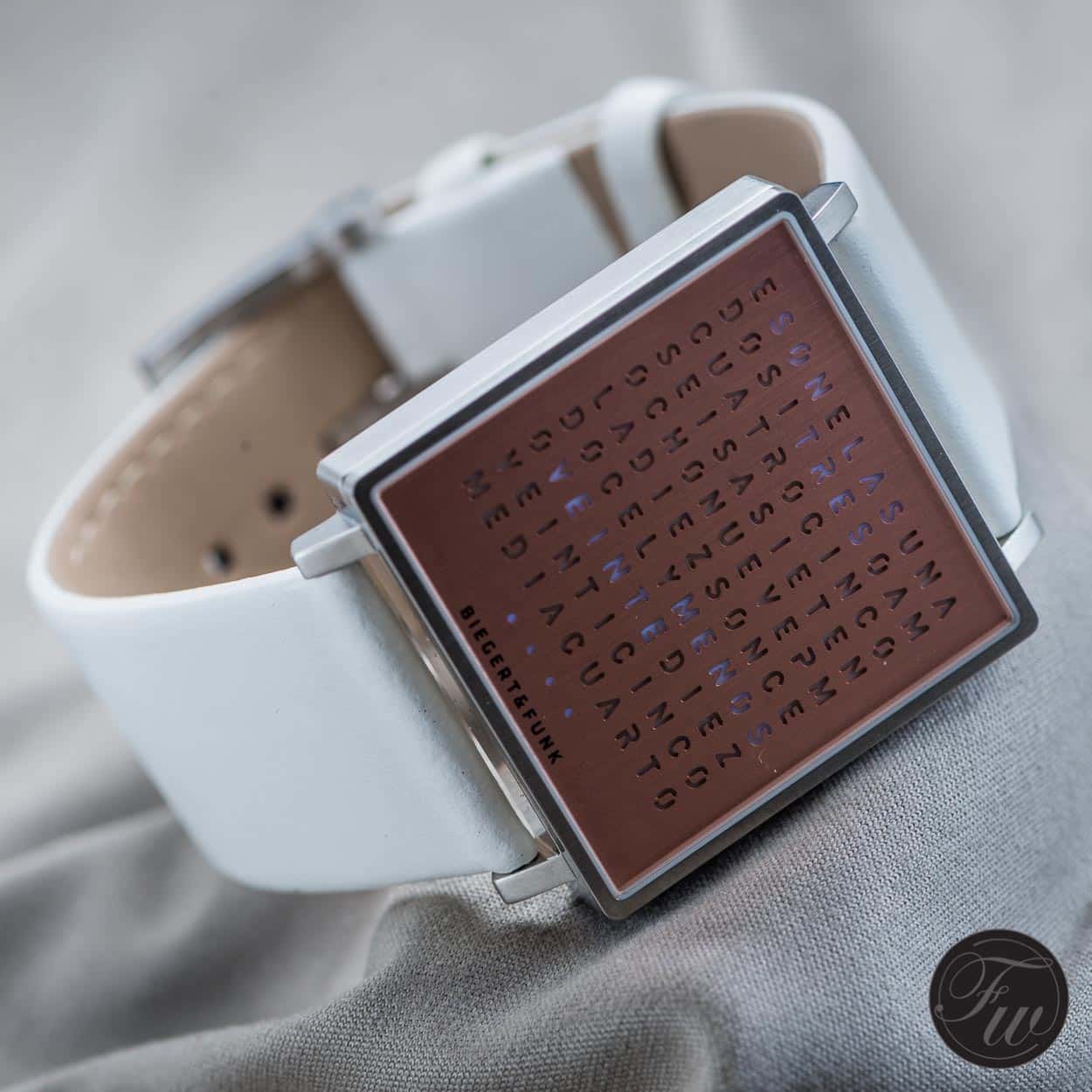 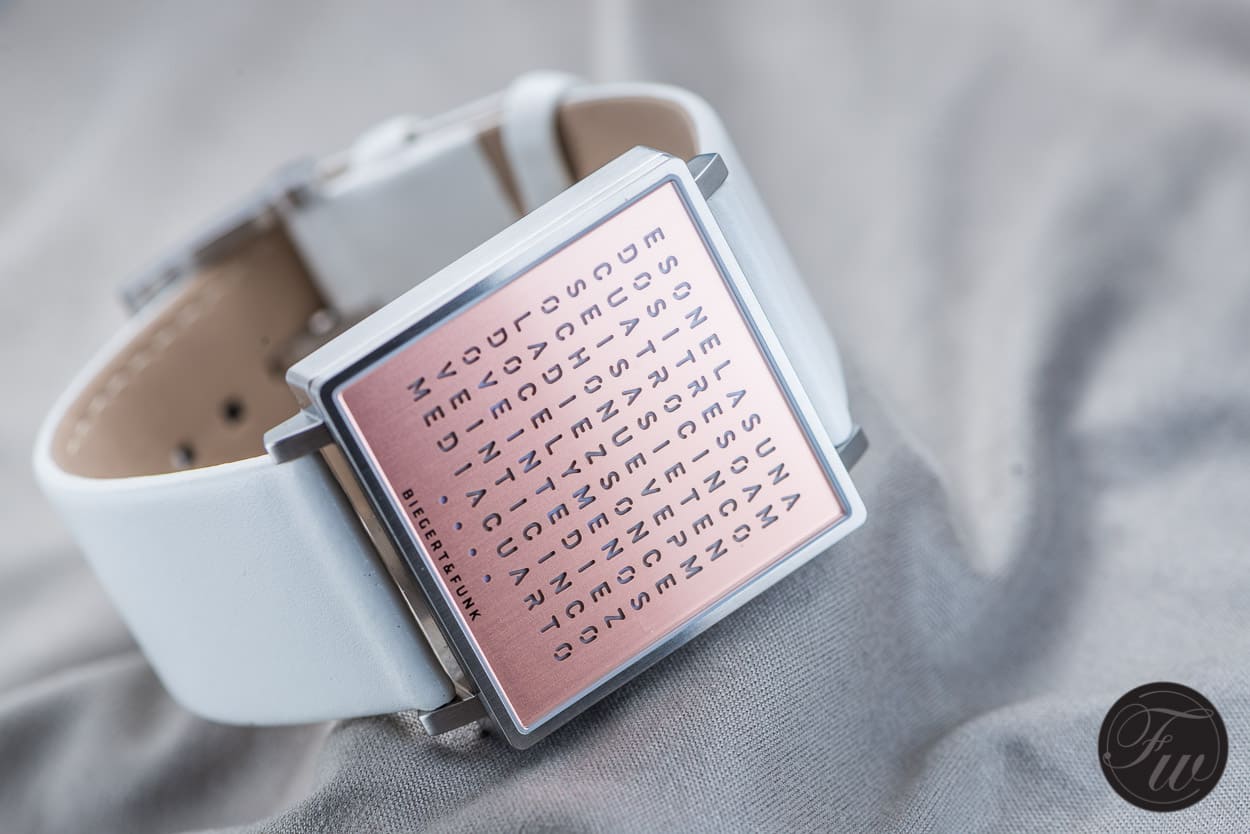 When I was looking at these QlockTwo W models, the built quality as well as the finish easily convinced me that I wasn’t looking at a cheap quartz watch or ‘gadget’. It is a serious timepiece for those who dare to be different and have no specific ‘need’ or urge to buy something mechanical. I also noticed that QlockTwo is being sold in The Netherlands at very serious watch retailers (think Patek Philippe, Rolex, Jaeger-LeCoultre, Omega, IWC etc), like Steltman and Gassan. It shows that this product (both the QlockTwo W and the clocks) can co-exist next to mechanical watches. In all honesty, it also speaks for the quality of the QlockTwo W watch that you will find it next to the best mechanical watches. It is a sign of trust by these retailers and you can be assured that they will take care of your watch when it needs a battery replacement or repair (in case it is necessary). 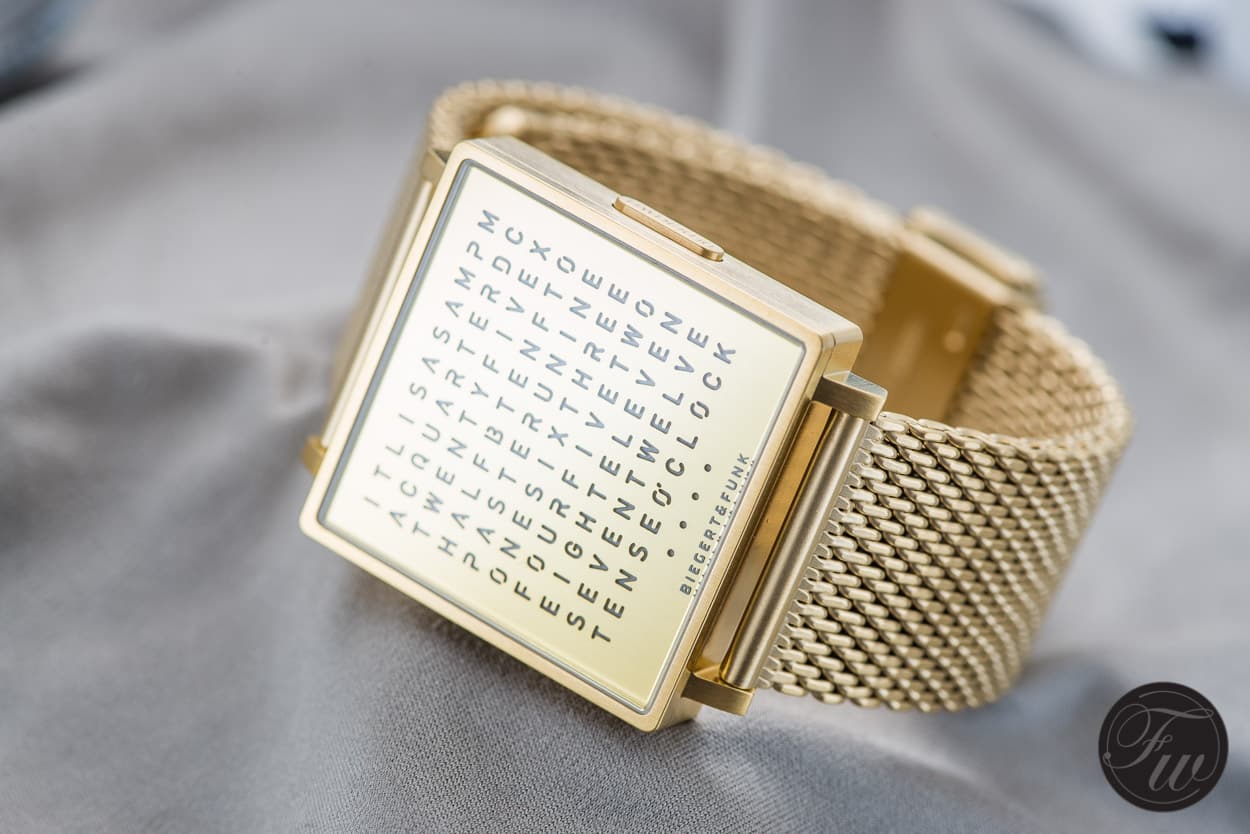 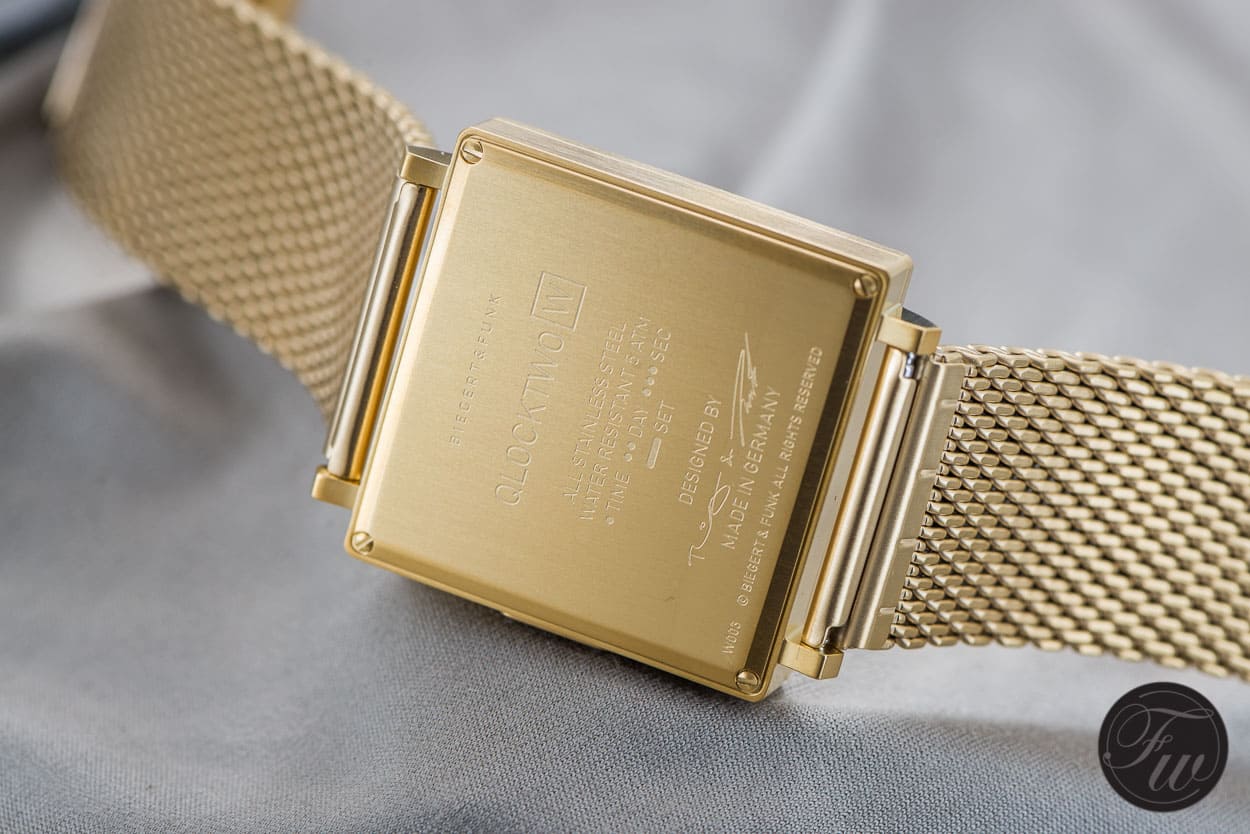 The caseback of the QlockTwo W also functions as a simple manual on how to operate the watch. Time is one push, calendar is two pushes and running seconds is three pushes. The finishing on the case and the quality of the engraving is pretty well captured in this image taken by Bert Buijsrogge. The mesh bracelet fits perfectly as well. 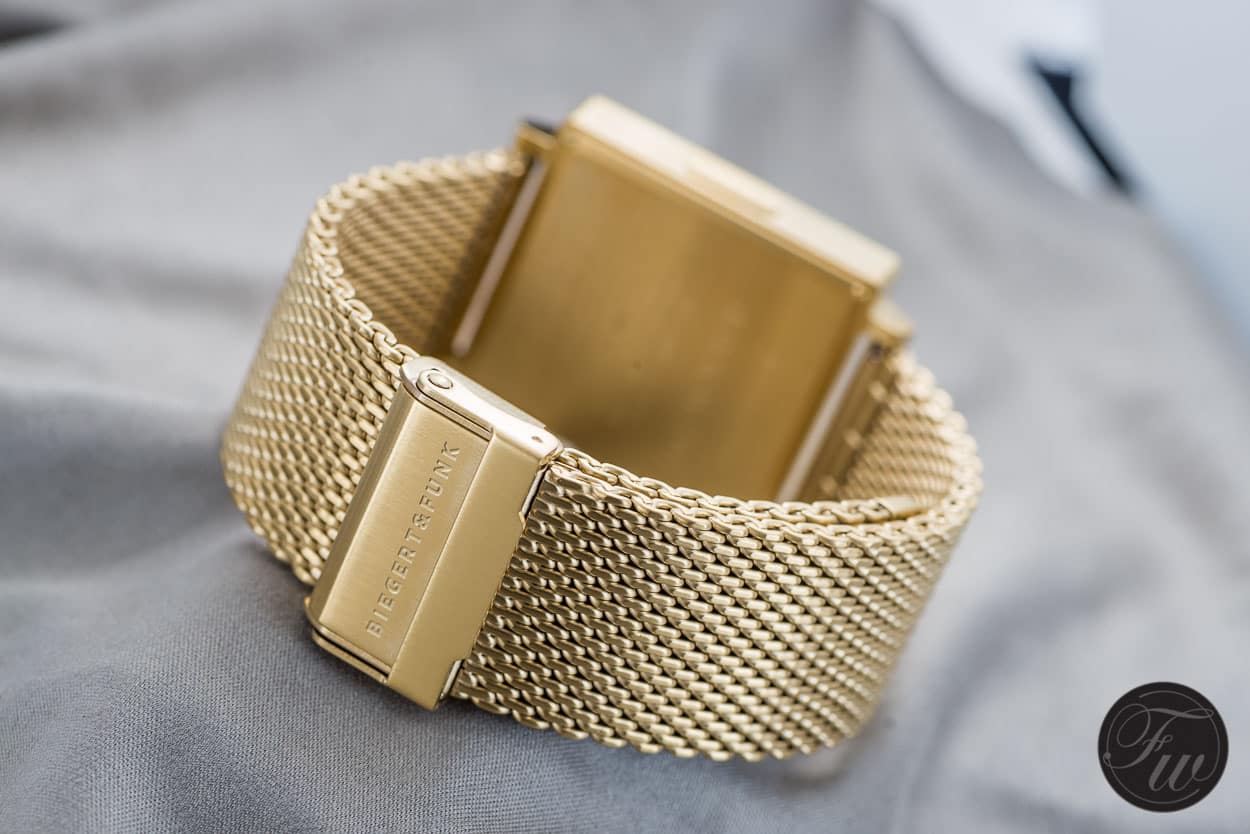 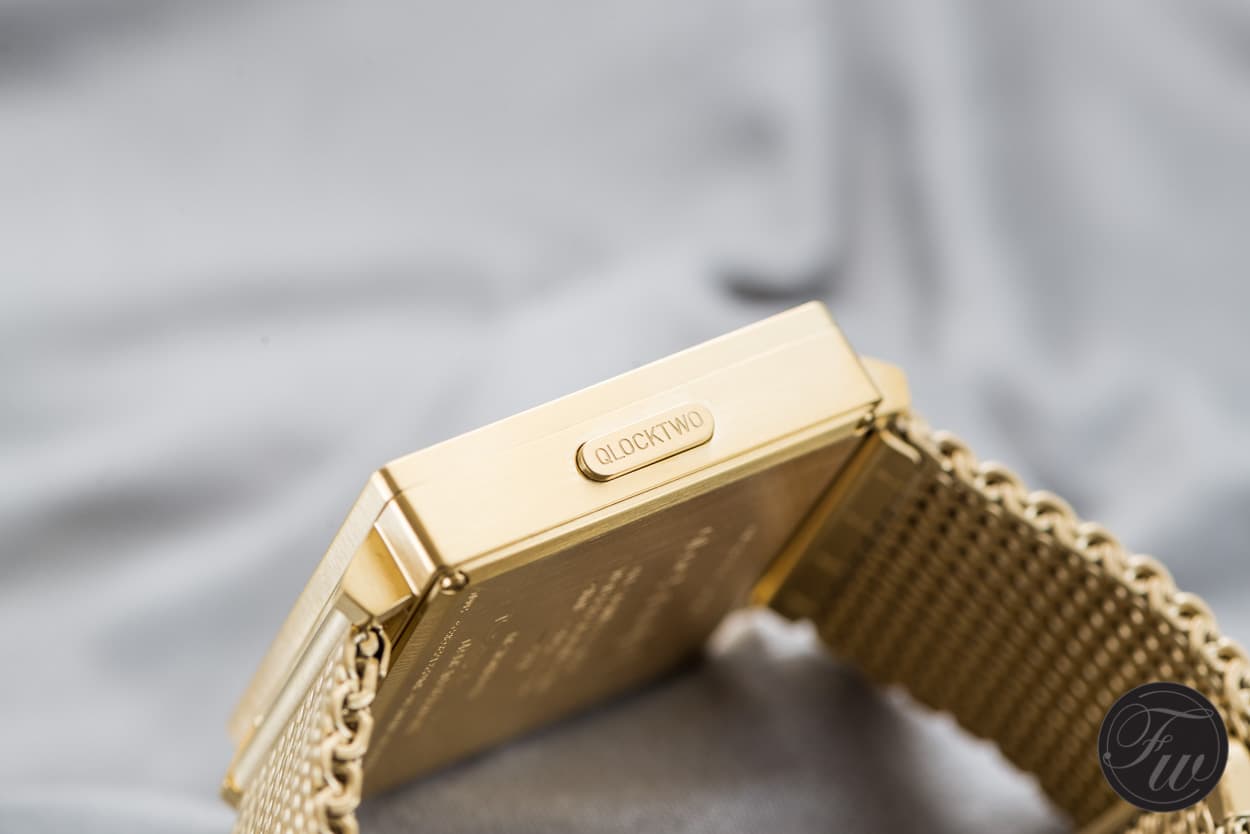 Prices of the QlockTwo W watch depend on the materials used, but start at €595 Euro.

The QlockTwo Touch is one of their clock versions. It is the table clock edition of their larger wall clocks called QlockTwo Classic and QlockTwo Large. The Touch is a  13.5 x 13.5 x 1.8 cm clock for on your table or desk. It comes in a variety of colors, including some special editions in “rust”, “full metal”, “golden legend” and “deep black”. Just like the QlockTwo W watch, it can indicate time, running seconds and an alarm. Besides that, the QlockTwo Touch allows you to use 20 different languages and has cool features like a night light, a night touch (to make it entirely dark, especially useful when you have this clock on your night stand), a snooze function (everyone needs to snooze at least 2 times in the morning) and you are able to adjust the brightness of the LED lights. Prices of the QlockTwo Touch start at around €485 Euro for the standard color versions. The special editions might have a higher price tag.

Operating the Touch is being done via the back side. With 5 buttons all settings can be done. The QlockTwo Touch is powered using the regular power supply (110V – 240V). 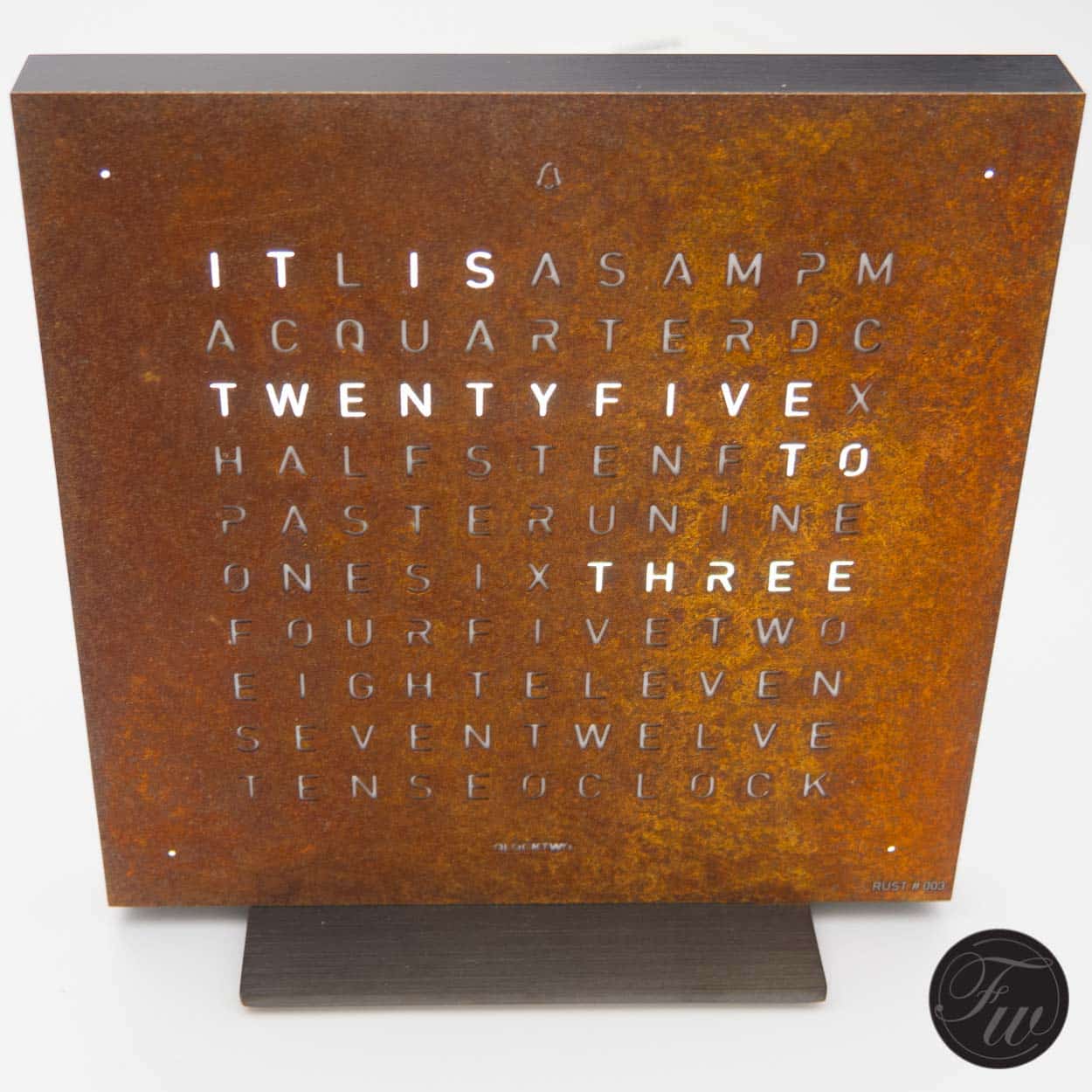 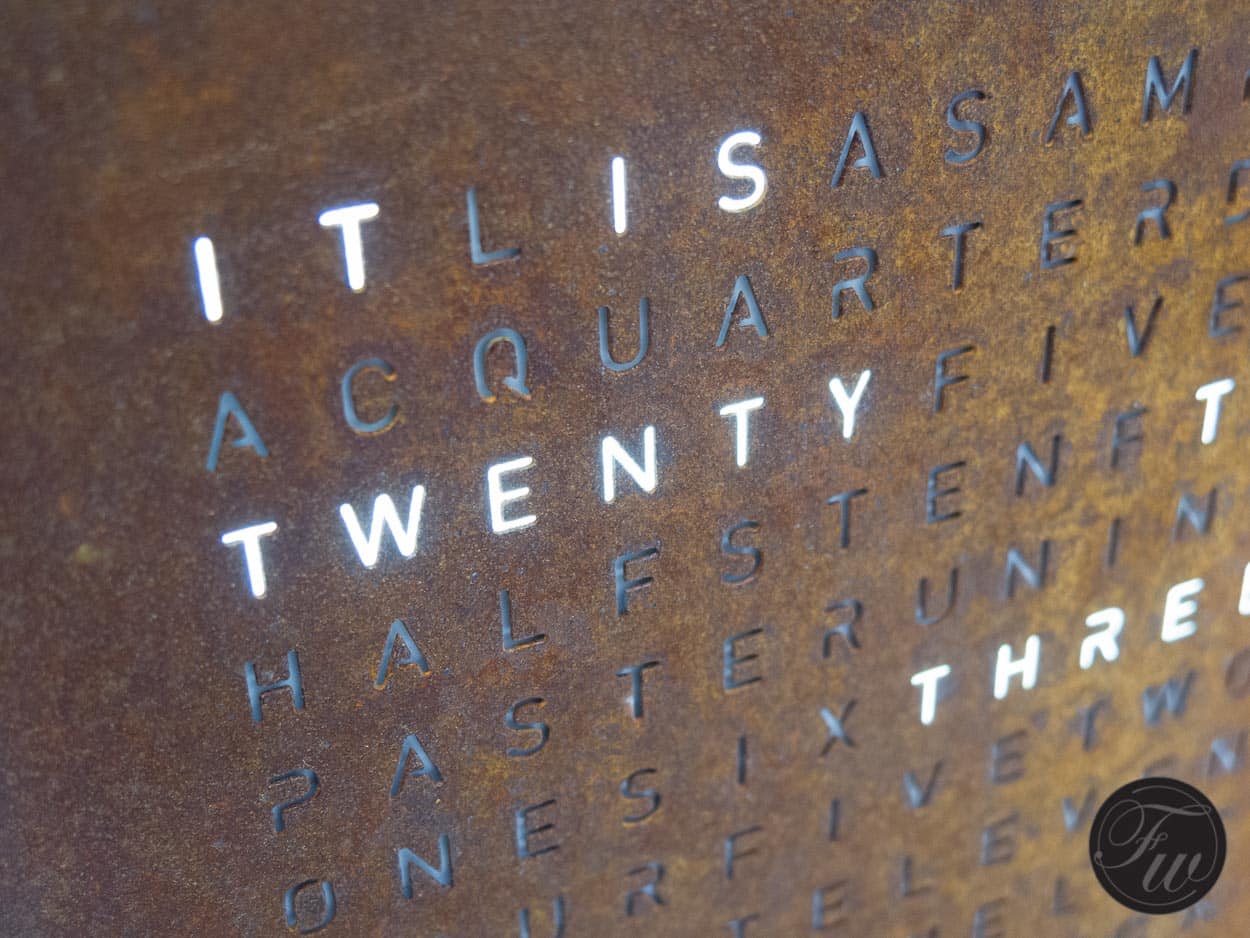 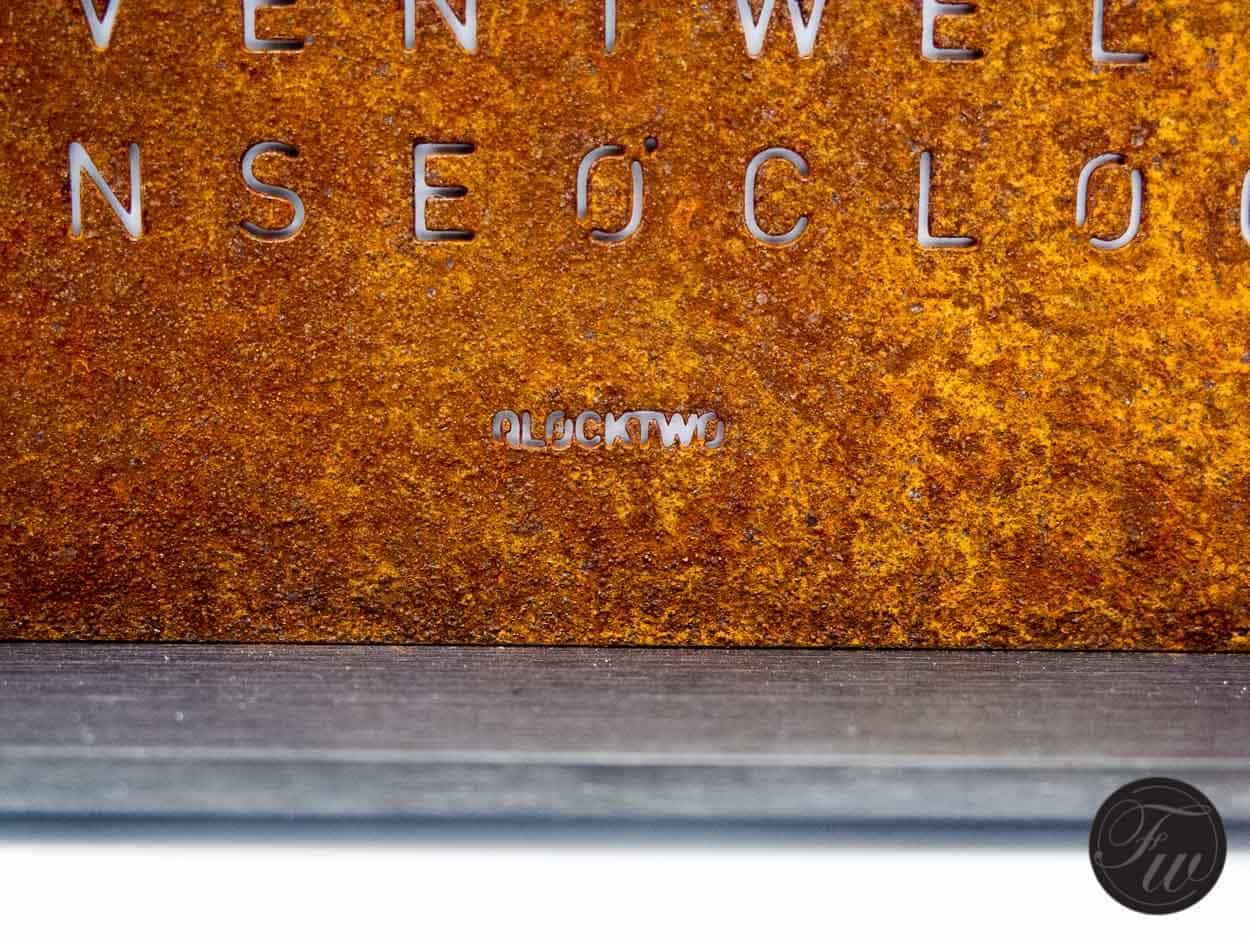 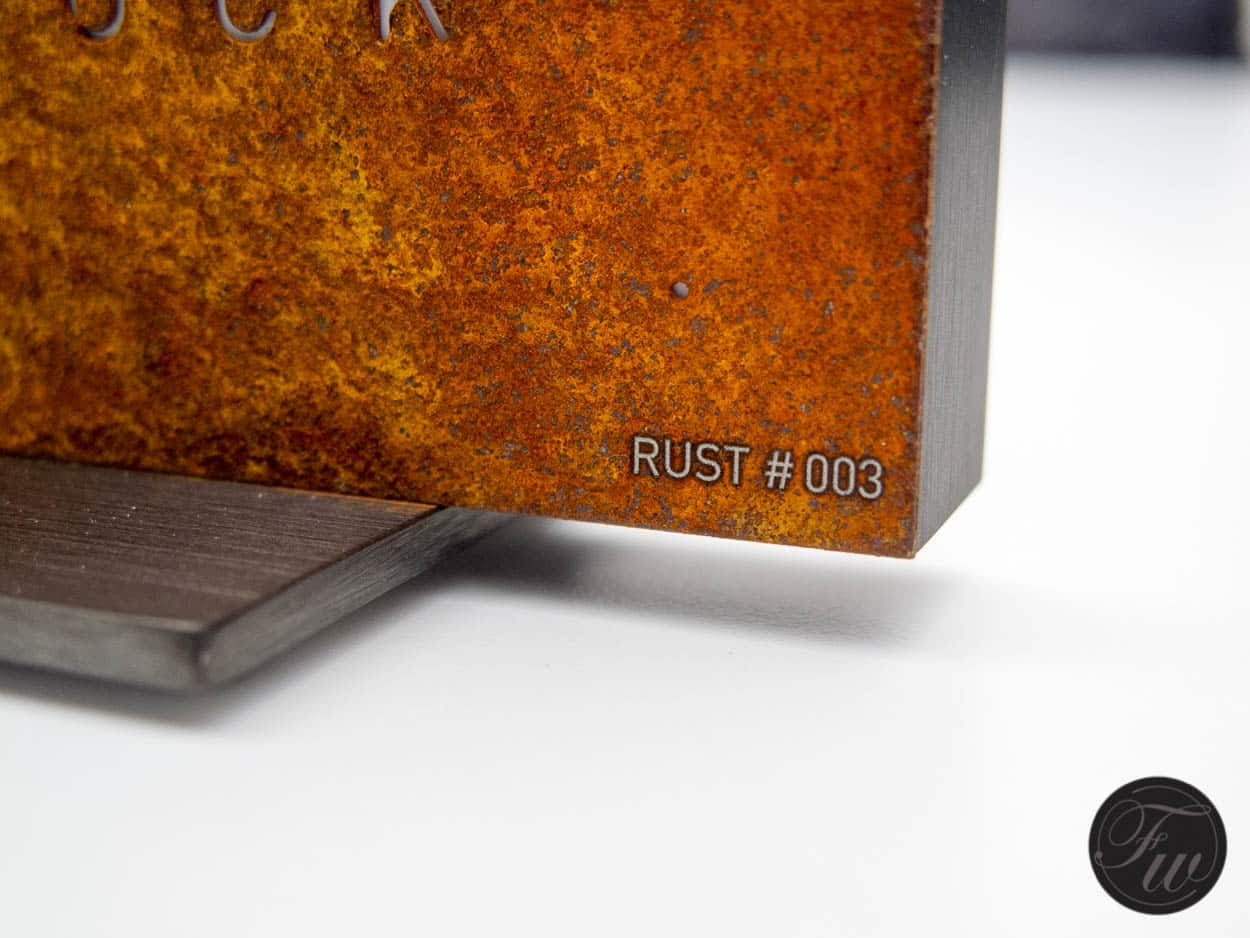 More information on these watches and clocks can be found via their website here. A big thank you to Alexander Wijt from HourLux for the introduction to QlockTwo. In the gallery below, you will find all the images we took during our appointment with Biegert & Funk.