Hardmetal — a name that, for a former music journalist with a specific interest in all things metal, always had a special ring to it. I was into thrash metal, speed metal, and also funk metal, but hard metal would surely also have been a subgenre I was down with. Hardmetal is an alloy that Rado patented in 1962 when it released the DiaStar, the very first scratch-resistant watch ever created and also the first timepiece featuring a sapphire crystal. The watch has been in continuous production ever since and has become the best-selling Rado model ever. But for the jubilee watch that debuts in 2022, Hardmetal was canceled. Instead, Rado “booked” another even harder star material to shine on the Rado DiaStar Original 60-Year Anniversary Edition and its bandmates. Its name is Ceramos.

While Hardmetal gives you the illusion that you’re in a mosh pit, the name Ceramos might sound like the name of the lead singer of a sinister metal band. But it’s not. Ceramos is the ceramic material that Rado chose as the perfect substitute for its famous Hardmetal alloy. Hardmetal is created from tungsten carbide powder that’s injected into a high-temperature oven. The sintering process that follows transforms the powder into a new mass. The result is a new material that is five times harder than steel. The big plus compared to a scratch-resistant surface coating like DLC or PVD is that Hardmetal is hard through and through. There’s no coating that can be penetrated. But Hardmetal was not hard enough for the new DiaStar Original. Ceramos is even harder and is therefore the material of choice.

Renowned designer Alfredo Häberli, who worked for various and diverse big brands like BMW, Camper, Iittala, and Vitra, made his opinion very clear when Rado’s CEO Adrian Bosshard asked him if he would be interested in designing a new DiaStar. “I didn’t want to create a new vintage watch,” Häberli says the day before the big launch in a Zürich design hotel. “The DiaStar was, when it came out in the early ’60s, an avant-garde, polarizing watch, and I wanted to keep that spirit and build on it. I have to be brutally honest now. The DiaStar is the only Rado I would wear. No offense, Adrian. The three DiaStar Original references on a steel bracelet have the shiny, prominent bezel that has become so easily recognizable. But instead of Hardmetal, Ceramos is now the material that shines.” 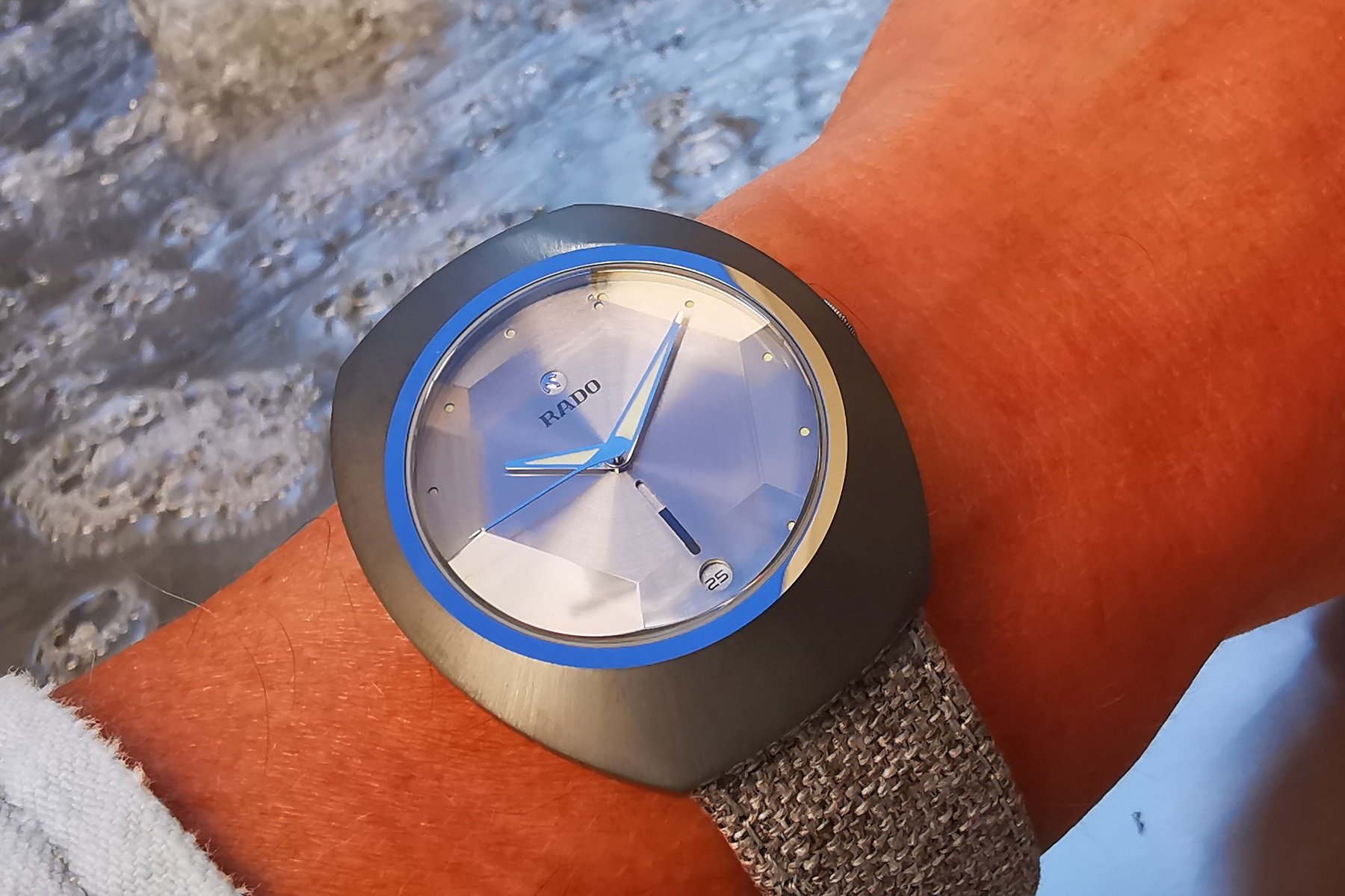 It’s interesting to know that the very particular, almost UFO-like shape of the original DiaStar was a case of form following material. Tungsten carbide, the base material for Hardmetal, cracks and shatters far more easily than traditional steel. So when Rado started working with Hardmetal, the brand reduced the chance of the alloy shattering by creating a smooth and flowing bezel and case. Ceramos debuted in 2011 when it was used to create the case of the D-Star. It’s a high-tech mixture of ceramic and metal alloy that’s light and scratch-resistant, and polishable, albeit through a lengthy and intensive process due to its extreme hardness. The result, however, is a metallic shine that is brighter and clearer than that of mirror-polished Hardmetal.

Rado is celebrating the 60th birthday of the DiaStar with four new watches — the DiaStar Original 60-Year Anniversary Edition and three DiaStar Original models with three dial colors. The special anniversary-edition DiaStar (R12163118) is the stylish “Designer Edition” of the quartet. This is the watch with which Häberli allowed himself maximum creative freedom. It resulted in a conical bezel in radially brushed Ceramos. The matte bezel looks more industrial than the original “glam metal” one — more Nine Inch Nails than T. Rex, if you want the difference explained in rock bands. The next striking feature is the faceted-hexagon sapphire crystal, its six bevels representing the six decades of the DiaStar’s existence. They also give the watch a jewel-like quality, with the reflections of the crystal offering a dynamic contrast to the brushed bezel. 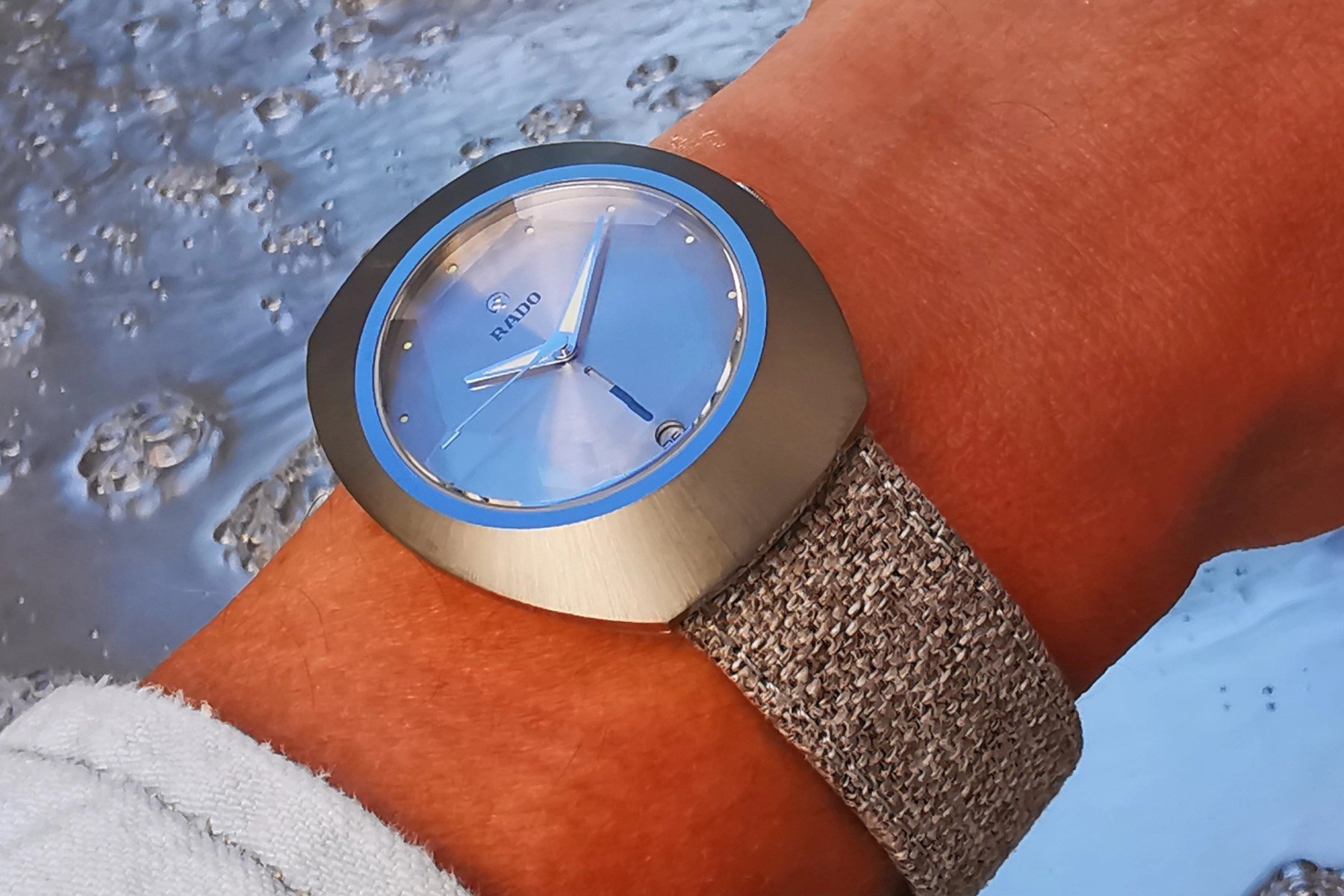 Also, the tapering hands are sleeker than in the three other DiaStar executions, and so is the day/date indicator. It has a color scheme in gray and natural-colored Super-LumiNova at 6 o’clock on the circular-brushed metallic gray dial. The date indicator doesn’t specifically tell the day but instead shows it graphically with sequential dark gray Super-LumiNova indication blocks. With this setup, you can also choose what day you want to start the week on, as Monday or Sunday could be the first indication in the minimalist window. 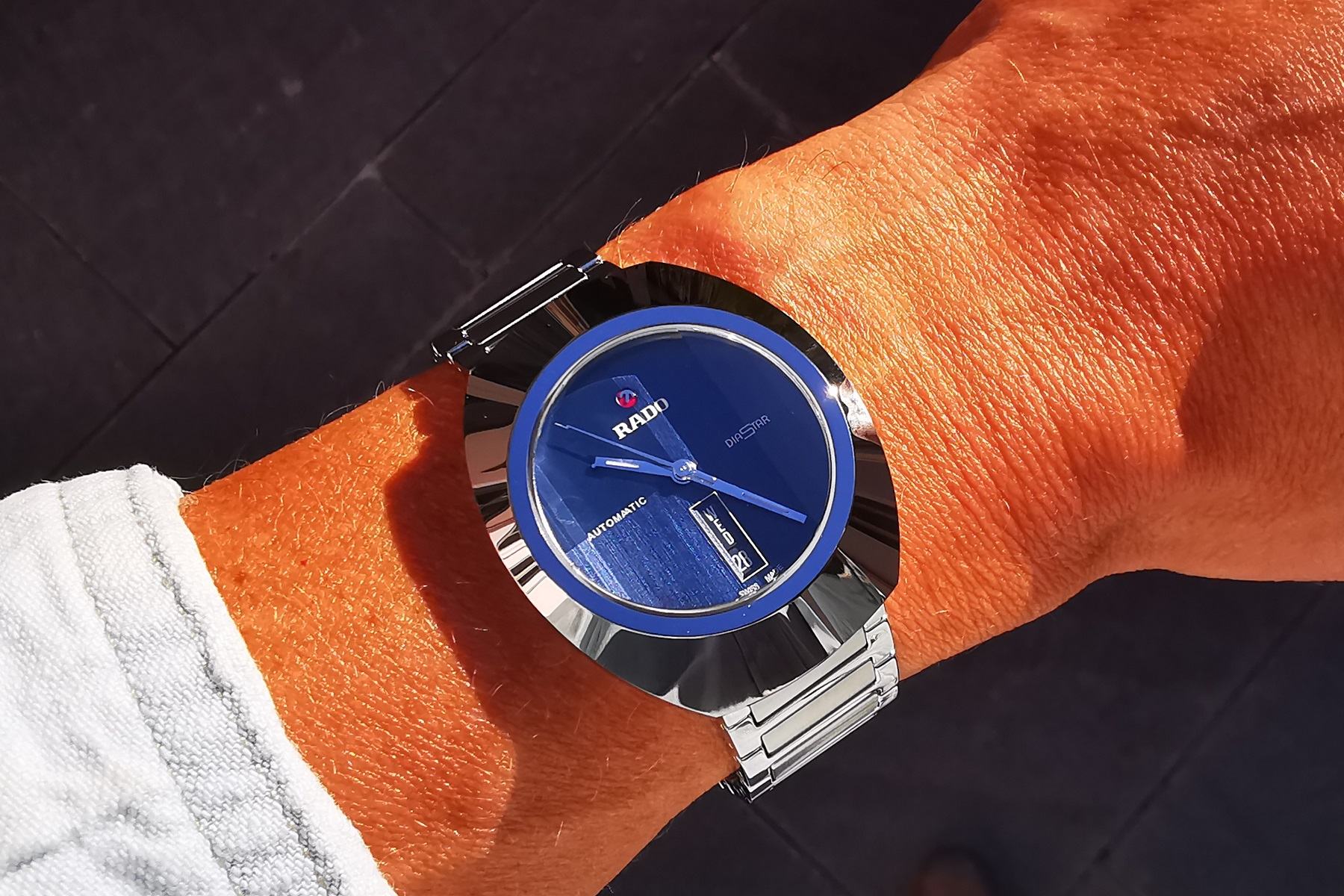 Shine on, you crazy Ceramos

The three other new DiaStar Original models come on a steel bracelet and have a more traditional look. But when I say “traditional”, I mean the futuristic tradition of the 1960s that is still very much relevant in 2022. The blue reference R12160213, gray R12160103, and green R12160303 show dials that are brushed in two directions. And the metallic shine comes to life under the parallel-facetted sapphire crystal with an anti-reflective coating on the inside. Moving the watch results in a reflective (but not too reflective), vibrant, and optically fascinating mini spectacle. Here, the traditional day/date indicator is in its natural, vertically striped habitat. 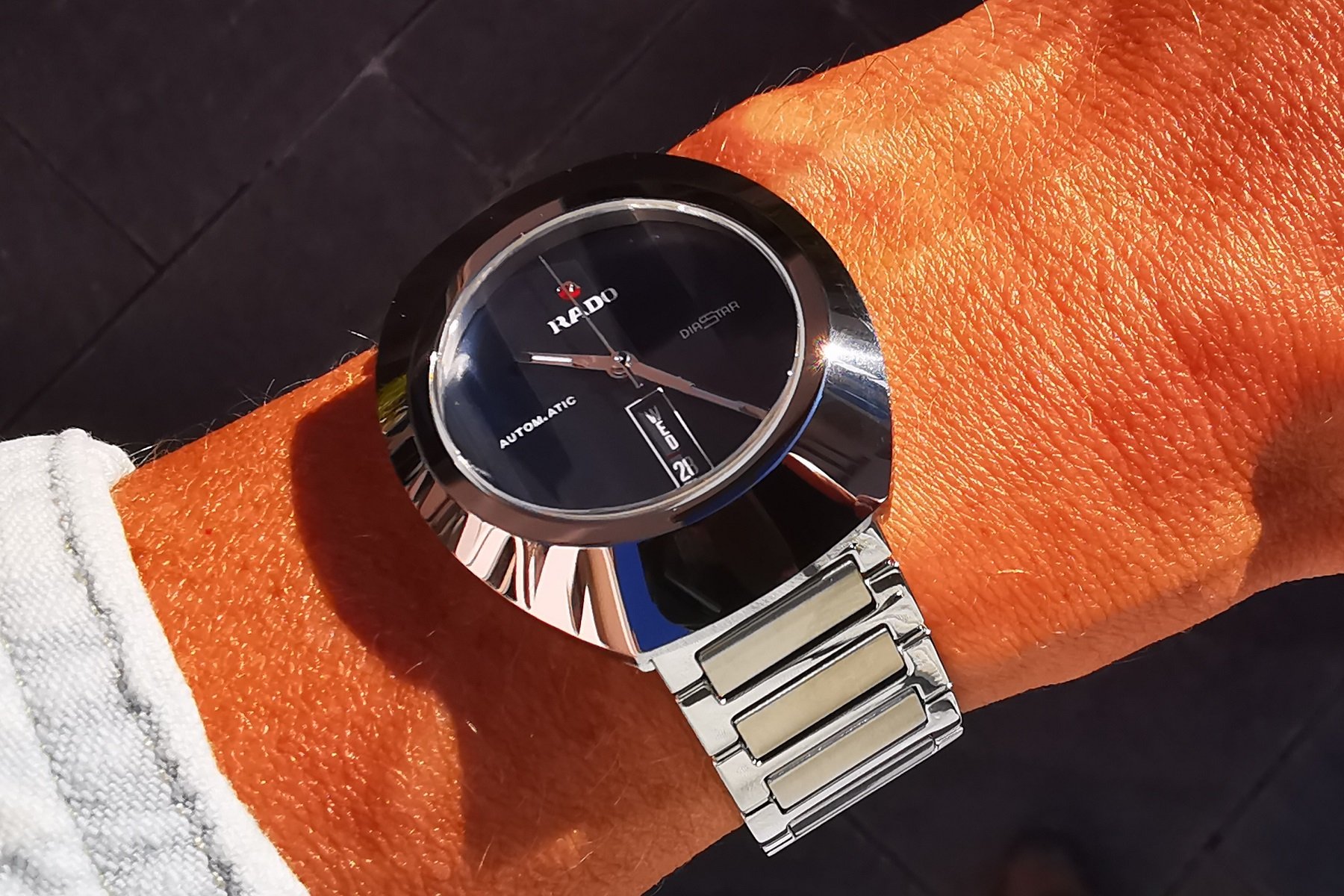 All of these watches have a Ceramos bezel and a steel middle case, case back, and crown. Häberli redesigned the side of the case, and the result is a sleeker and slimmer DiaStar. The three new shiny DiaStar Original models measure 12.1mm thick, as opposed to the 12.6mm thickness of the models in the current collection. The Anniversary Edition measures 12.3mm thick due to the slightly taller facetted crystal. The diameter and length of the case, however, remain unchanged, coming in at 38mm and 45mm respectively. The slightly different shape and thickness do make the watch feel more “in” than “on” the wrist. And as far as I’m concerned, that’s a good thing when wearing a watch with such a specific shape (and shine, for that matter).

Inside all of the new DiaStar Original iterations beats the gold-plated Rado caliber R764. It’s an automatic movement with an 80-hour power reserve and an anti-magnetic Nivachron hairspring. This special version of the Swatch Group’s shared Powermatic 80 movement hides behind a closed snap-on case back. Yes, you read that right: there’s no screw-down case back. Nevertheless, the new DiaStar Original is water-resistant to 100 meters. 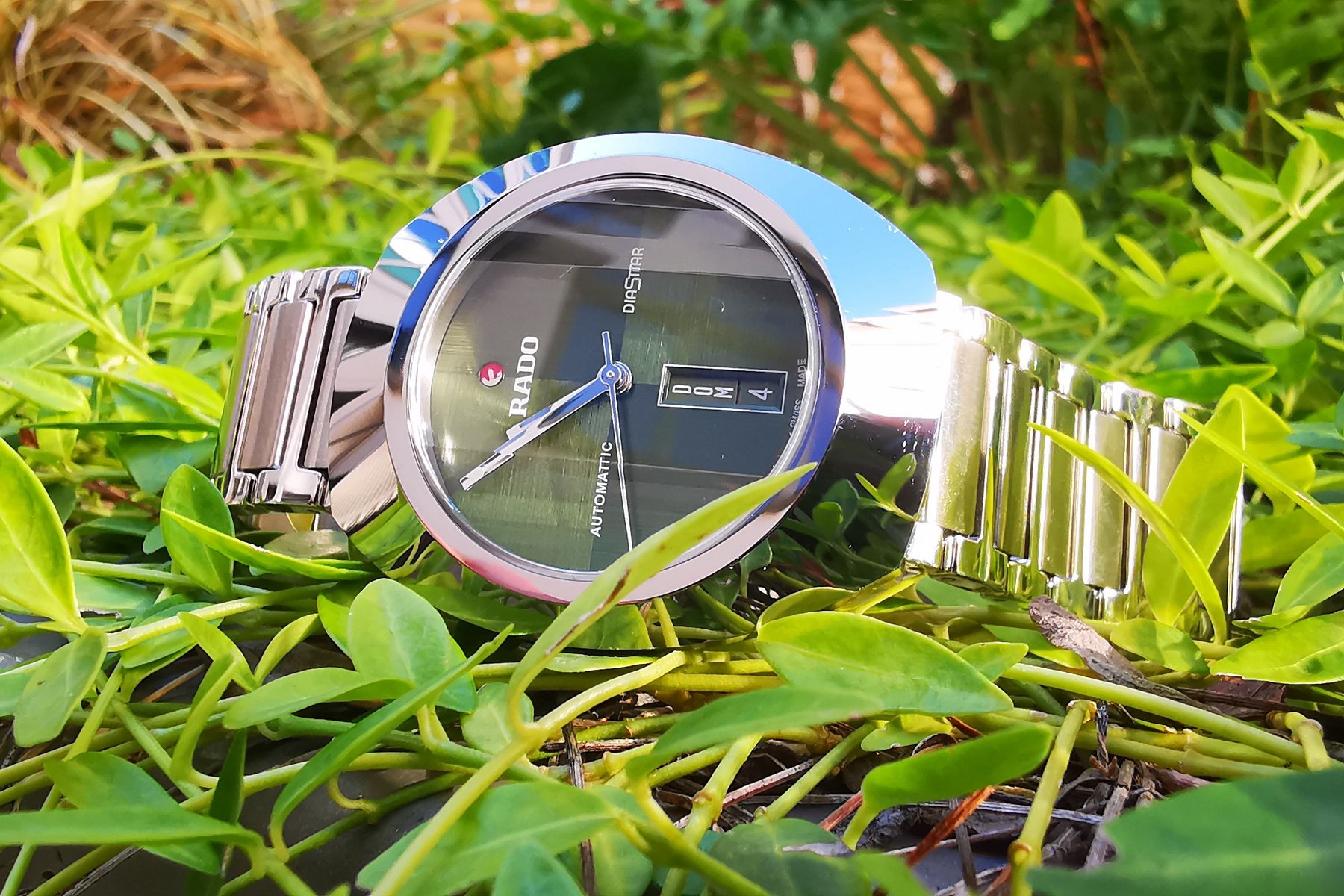 The Rado DiaStar Original 60-Year Anniversary Edition (R12163118) has a suggested retail price of CHF 1,850 and comes in a stylish gray pouch. Inside is a brushed steel Milanese bracelet with polished sides as well as a gray textured textile strap outfitted with a satin-brushed steel extendable folding clasp. The straps have the EasyClip system that makes them quickly interchangeable for a different look and vibe. The three other DiaStar Original watches come on a steel H-link bracelet. There’s the blue reference R12160213, gray R12160103, and green R12160303. Each carries a price of CHF 1,350. I think those are retro prices for future-proof timepieces. Please let me know your thoughts in the comment section below.

We will try to get the watches at Fratello HQ as soon as possible for an intensive hands-on session and a more in-depth write-up (and also for way better, more professional pictures. What can I say? I’m no Bert Buijsrogge!).