Recently we received an invitation to head to Milton Keynes in the United Kingdom to visit one of the top performing F1 racing teams. Being a returning fan of the F1 this was like being a kid in a candy store. Too bad there was a strict no photography policy at Red Bull Racing but we quickly learned why this was fully understandable. 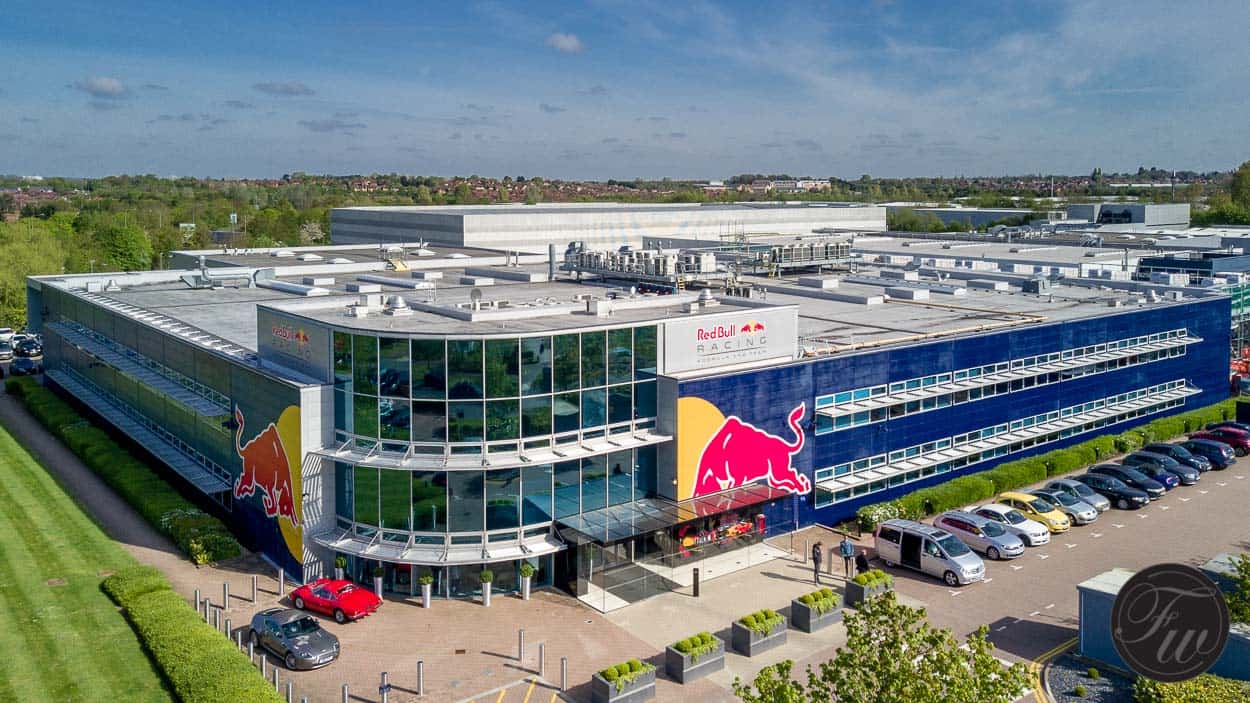 Starting off in the workshop we get a rough presentation of Red Bull Racing, its history and their way of doing things. Although we learn that there are roughly 800 people working there, it feels like a small family. Not just a job but ‘a way of life’ as they call it themselves. Crazy to realize it takes that many people to race two cars around a circuit. Having gone through all steps, from design to manufacturing all the way to actually going to the track, it’s time to see it all. 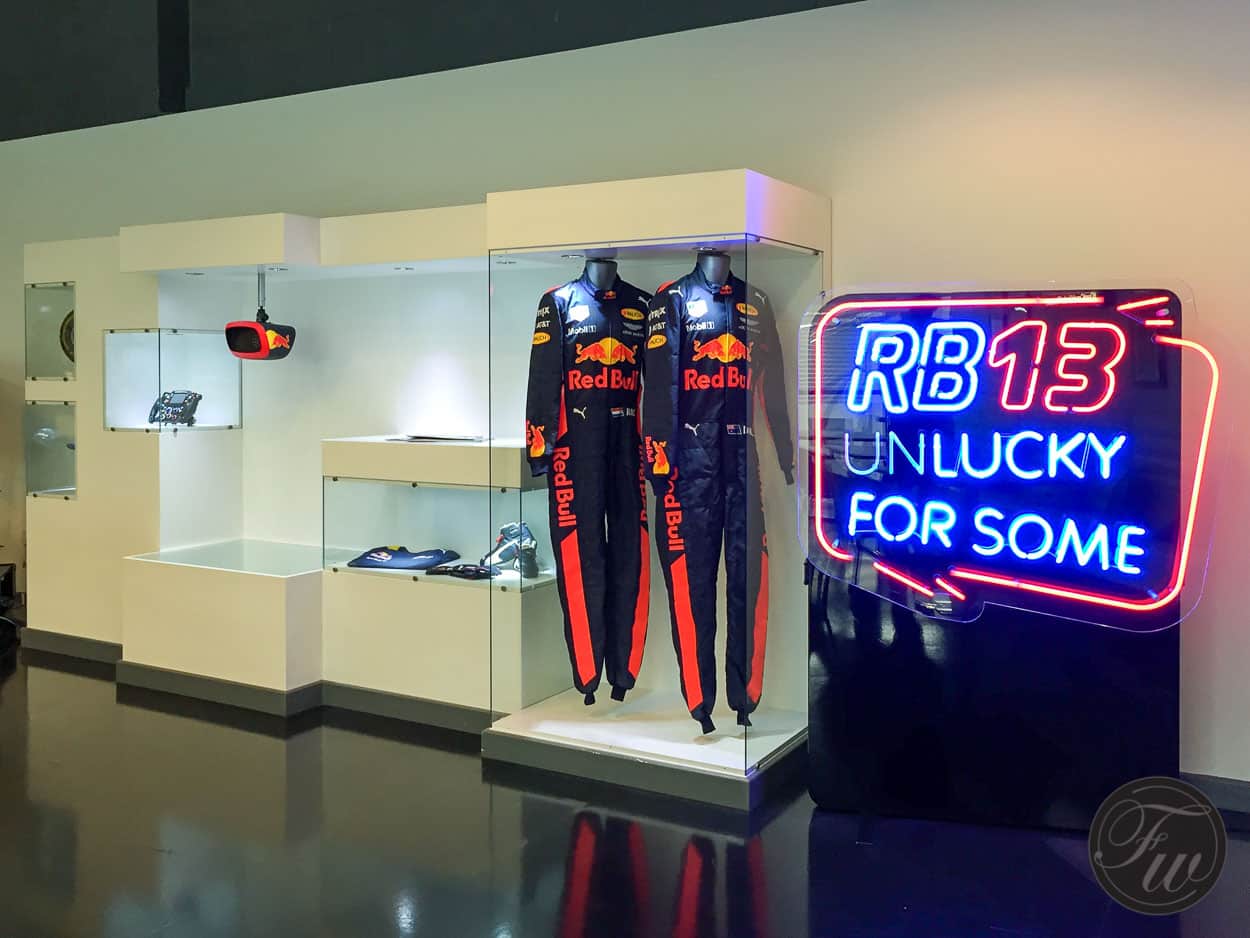 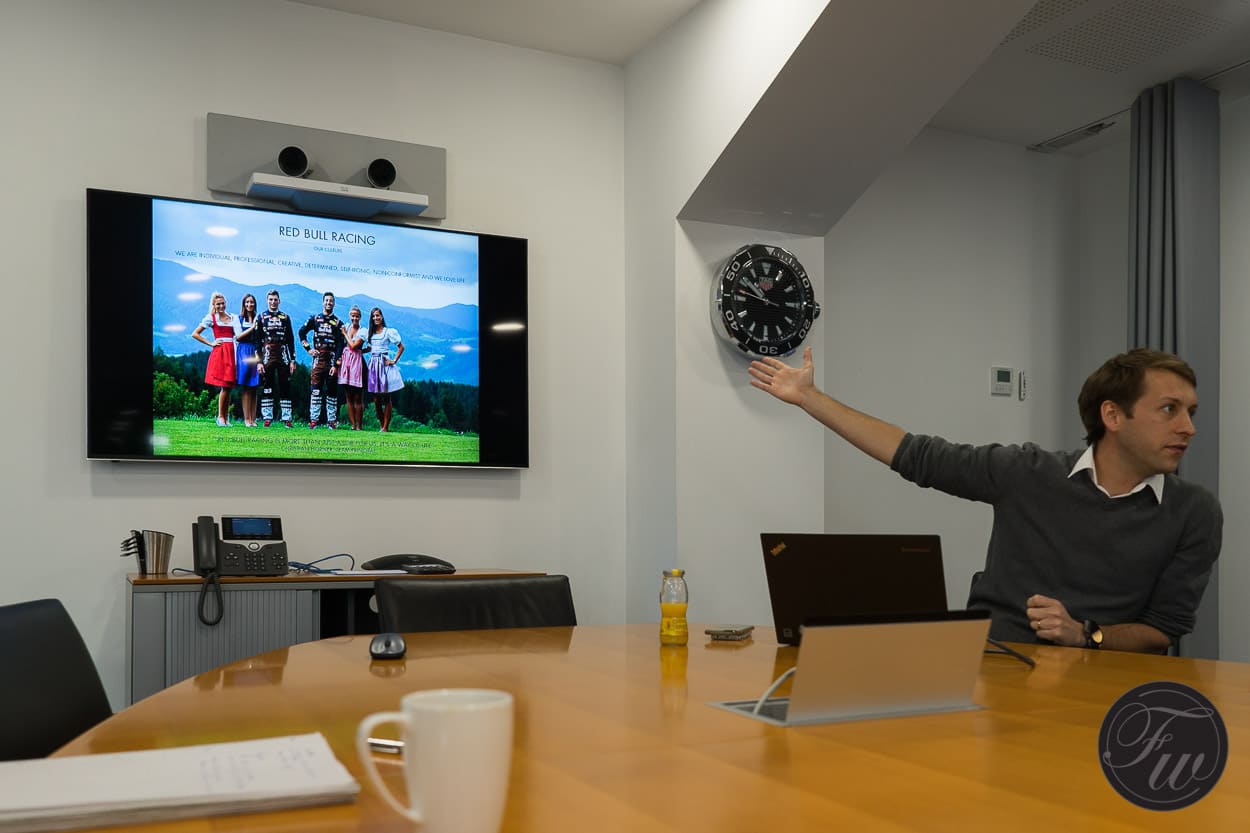 Just as in any watchmaking company the security level is high and people only have access to the areas where they need to be. Starting off at the offices we see Christian Horner, team principal since the age of 31, going about his daily work. Running his job like in any other company. Having an office job from Monday to Friday yet spending the weekend on the track during race weekends. Ever since he was appointed as team captain, Red Bull Racing has grown in size and success.

From paper to the track

Adrean Newey, CTO, sits in the next office and still designs by hand as we are told. Later on these drawings are then transferred from paper into the computer where they are prototyped and tested before actually being used on a track. From where we are standing we look over a handful of desks. But as soon as we walk further we see an endless amount of working spaces. There are easily 100 people working here. Quite amazing to see. Each of them grouped into a specific expertise. On a small display we see specialities like aerodynamics, gears, suspension, R&D, materials, wind tunnel analysis, race engineering electronics, composite, planning, simulation, vehicle performance and so on. We see many screens showing 3D modeling work. On one it looks like a rear diffusor where tiny changes are being made. Here we also learn that the wind tunnel is 20min away and not on-site.

Next stop is the electronics workshop. Components are designed and manufactured here. All teams use a standardised ECU and from there they designed around it. On the desks below us we see how cables are being assembled. Each specifically manufactured to a certain race as the technical drawings have a certain track on them. Depending on the track different wiring is used. There can be up to 150 different sensors on a car during the Friday testing to collect as much data as possible. This amount is brought down later for weight purposes. 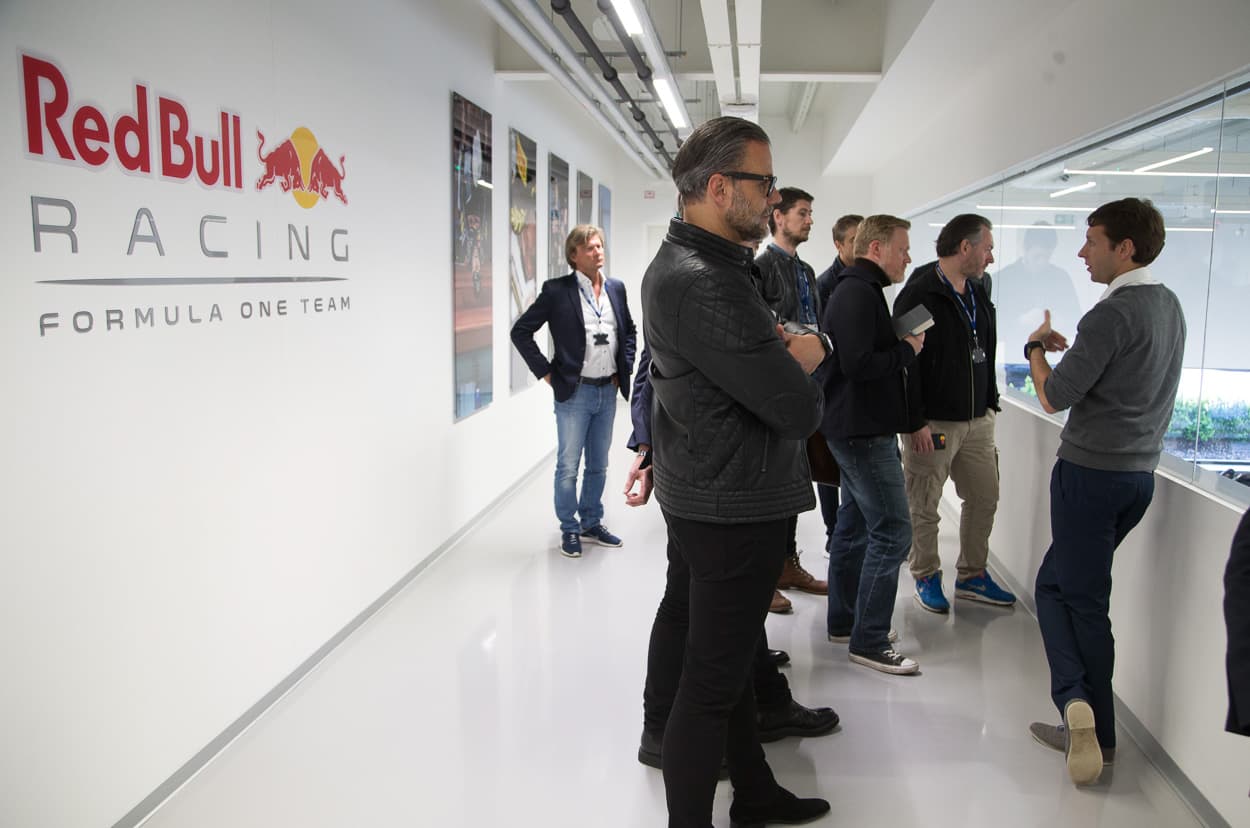 As there is a limit to the amount of people that are allowed at the track. Red Bull Racing has the AT&T operations room where  extra guys can support them off-site. Data from the track is transferred real-time to the operation room where all data is analyzed and communicated. It looks like a mission control center as you’ve probably seen from NASA. On a huge video wall there are video streams from the garage and the control center. Exact position on the track is shown as well as endless amounts of live data.

In Formula 1 everything is done at the utmost precision. Even when it comes to paint. Apart from the need to have a consistent looks and feel the car is designed to be totally smooth. That’s why all logo’s are painted on creating a totally smooth surface as this is a vital role to maximum performance. Furthermore the weight of the paint used is reduced to the absolute minimum. It’s better to put that weight to use in other areas like stability or aerodynamics. Where many would refrain from doing so, logo colors are slightly off from official branding to make the car and logo look as good as possible in all conditions. 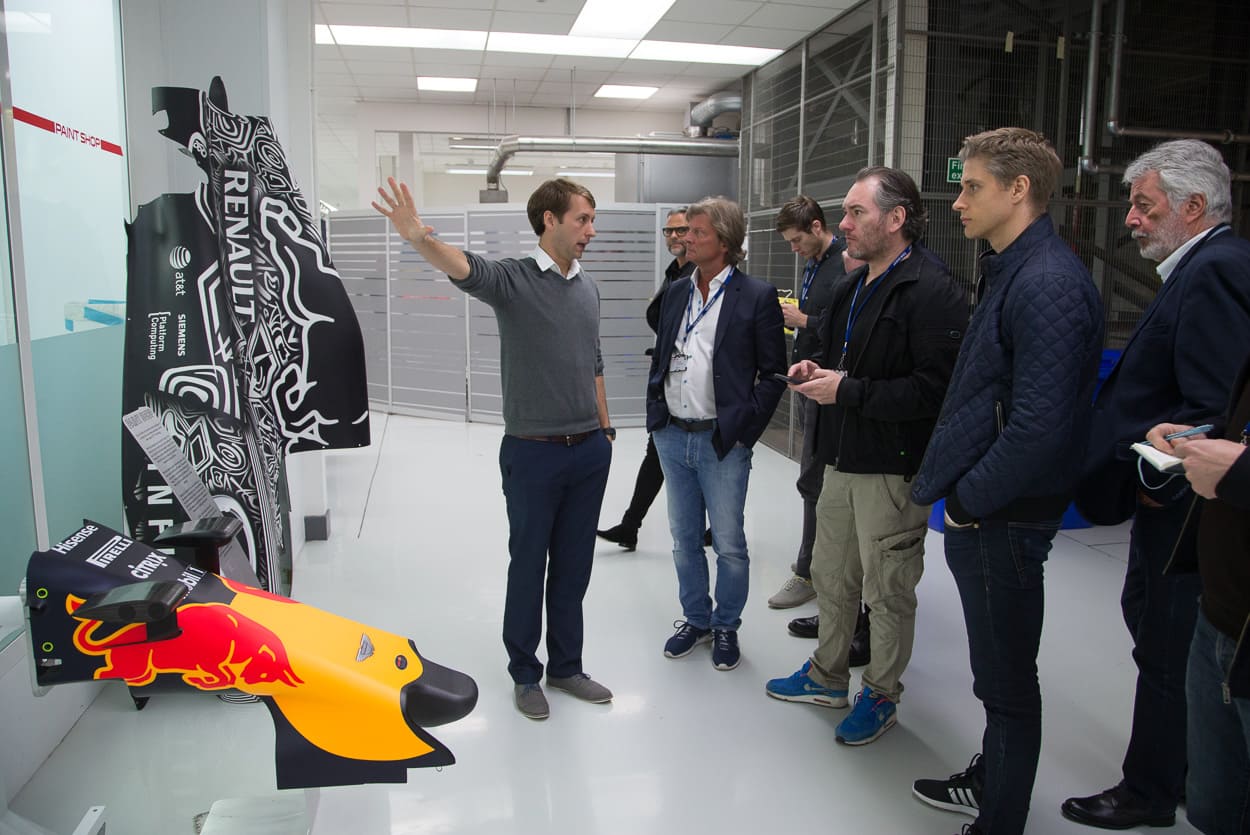 New parts are being made with the help of 3D printing which is also called rapid prototyping. It’s a new and convenient way of making components for testing. Even the most complicated parts can be made in one single process. Laser makes contact with a liquid resin which turns solid. After every step the component is dropped and the process is repeated until it is ready. 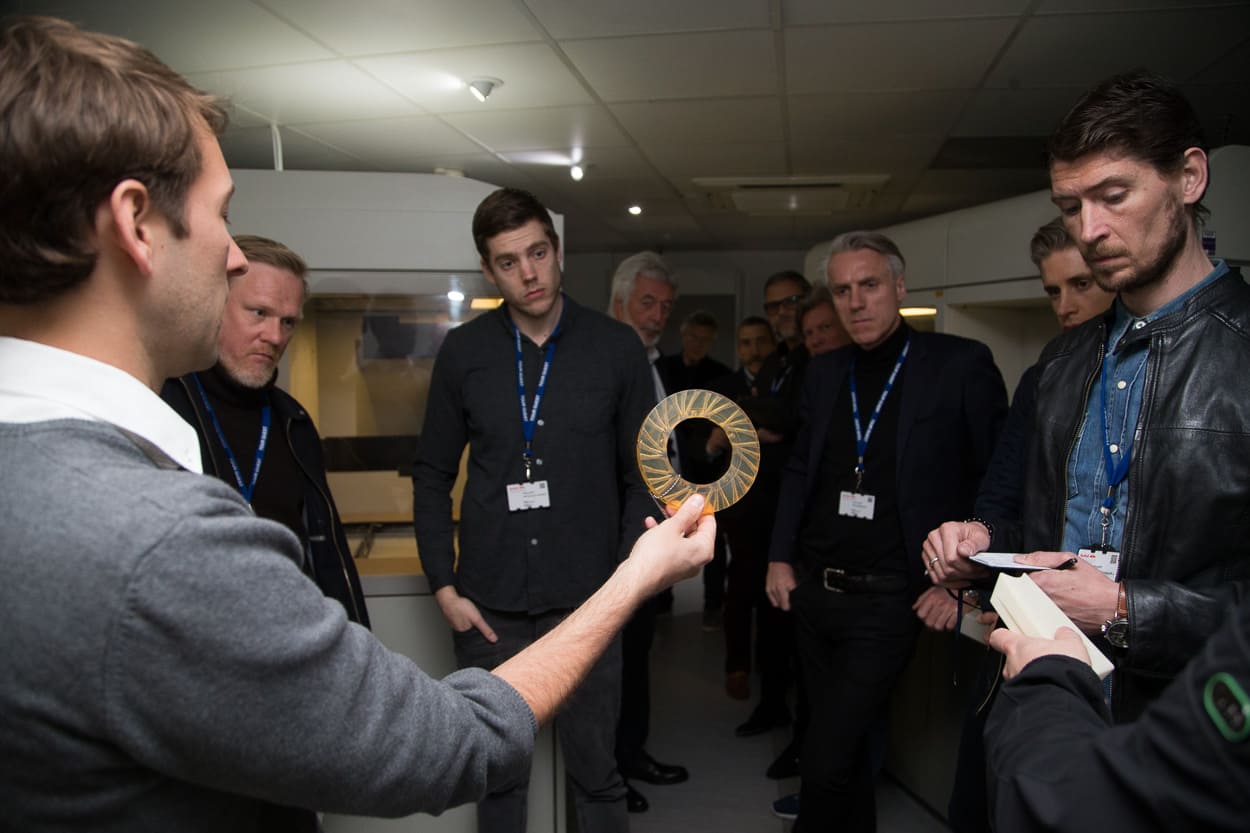 Last step is the testing of the final car in the wind tunnel. For this they use a model that is roughly at a 60% scale. By reducing everything the total costs are significantly less yet getting valuable test results. 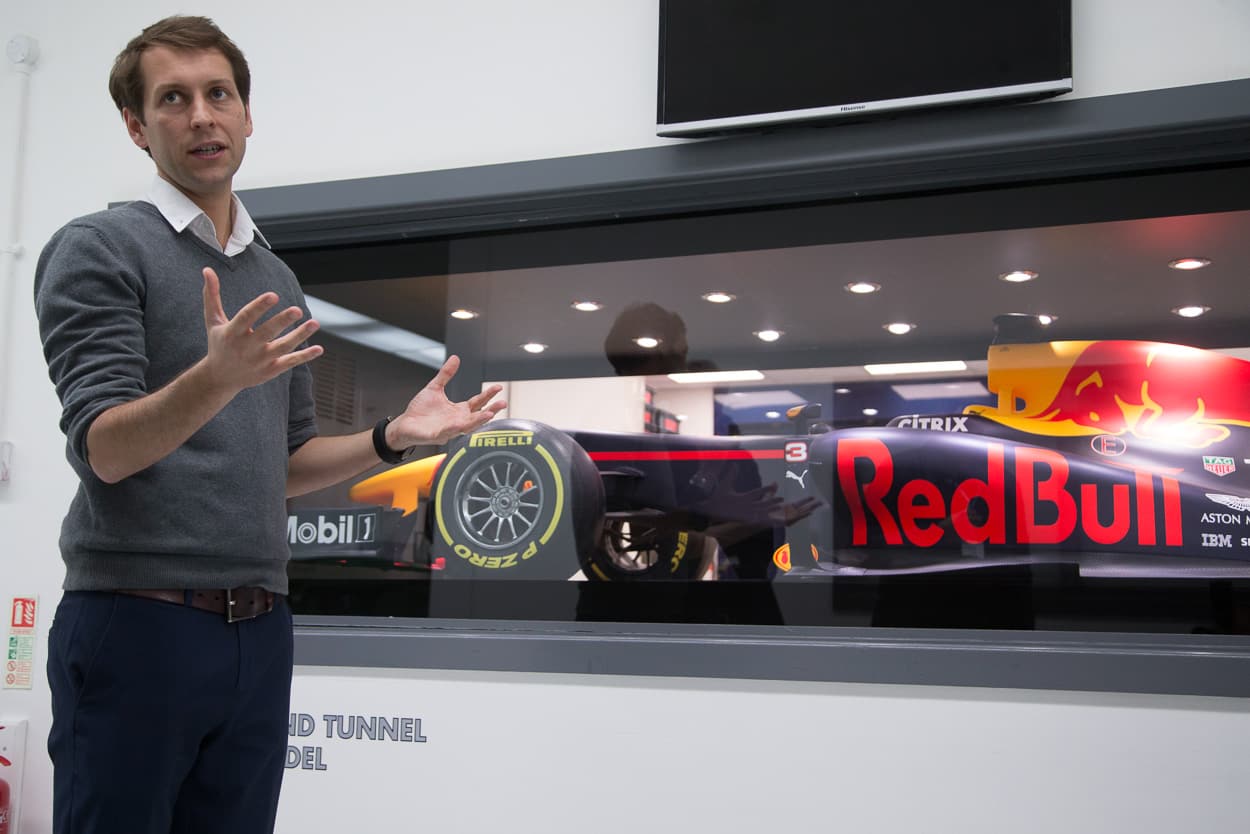 We find our way to the manufacturing building and start off at composites. Construction of parts starts with resin molds that are used for production batches. Where everything in F1 is hi-tech, cheap hairdryers are used for heating the carbon layers to fit into the molds. Layers are stacked and in an pressure chamber air is sucked out and the parts is pressurized and heated for finishing. Roughly 10.000 components are produced annually in carbon and Rohacell. 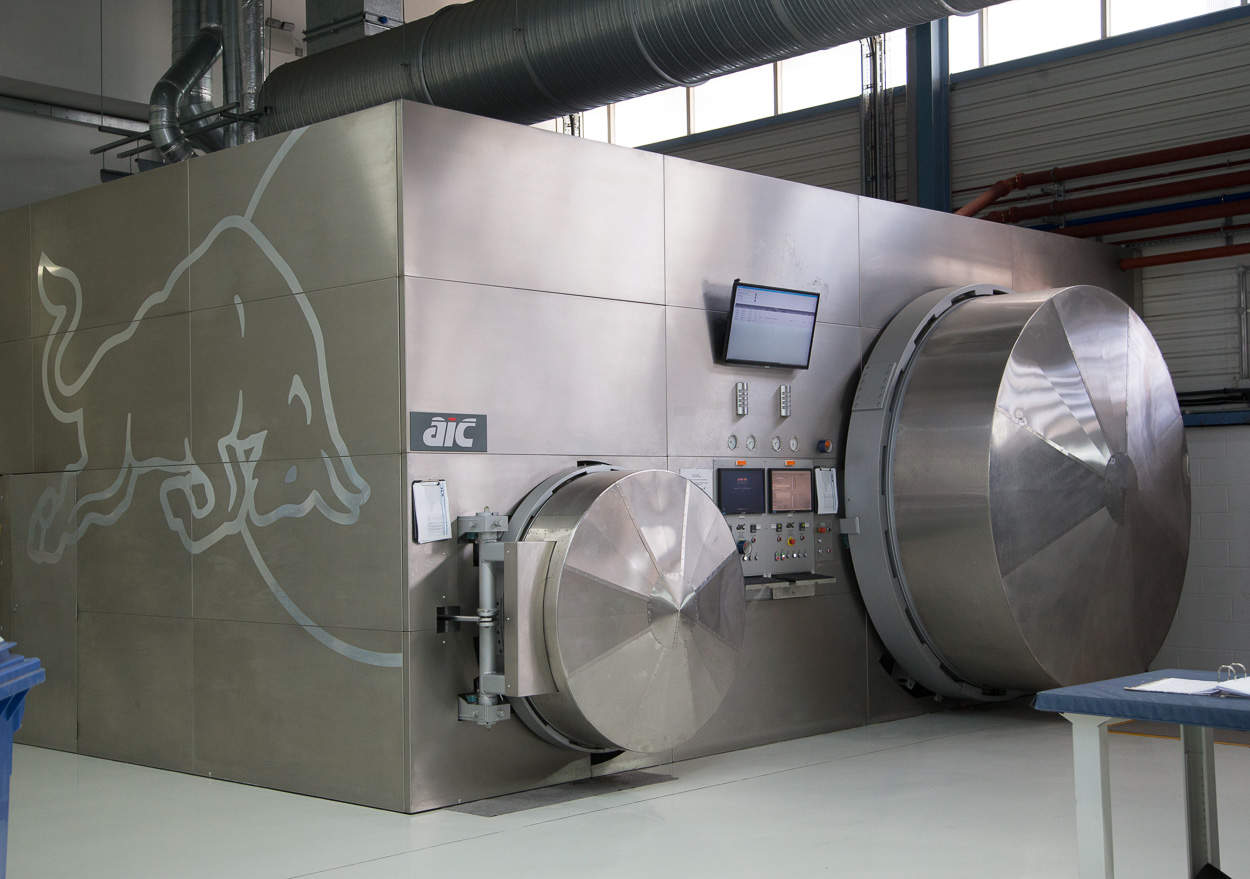 In the metal workshop we see sample parts in various materials. Apart from the usual aluminium, steel and titanium they also use Densamet. This extremely heavy metal is used to  add weight to meet the official regulations as there is a minimum weight for the car. Machining of all the metal parts is done in the same way as you will see in any watch manufactory. Endless milling machines are cutting parts. The only difference is that these are massive compared to the ones used in watch making.

We stop over at the Hall of fame where all of the Red Bull Racing cars are on display. All accept one, as quickly noticed by one of us. Apparently cars are still used for display purposes. Having all cars lined up it’s clear to see how they evolved trough time and adjusted to the ever changing regulations. 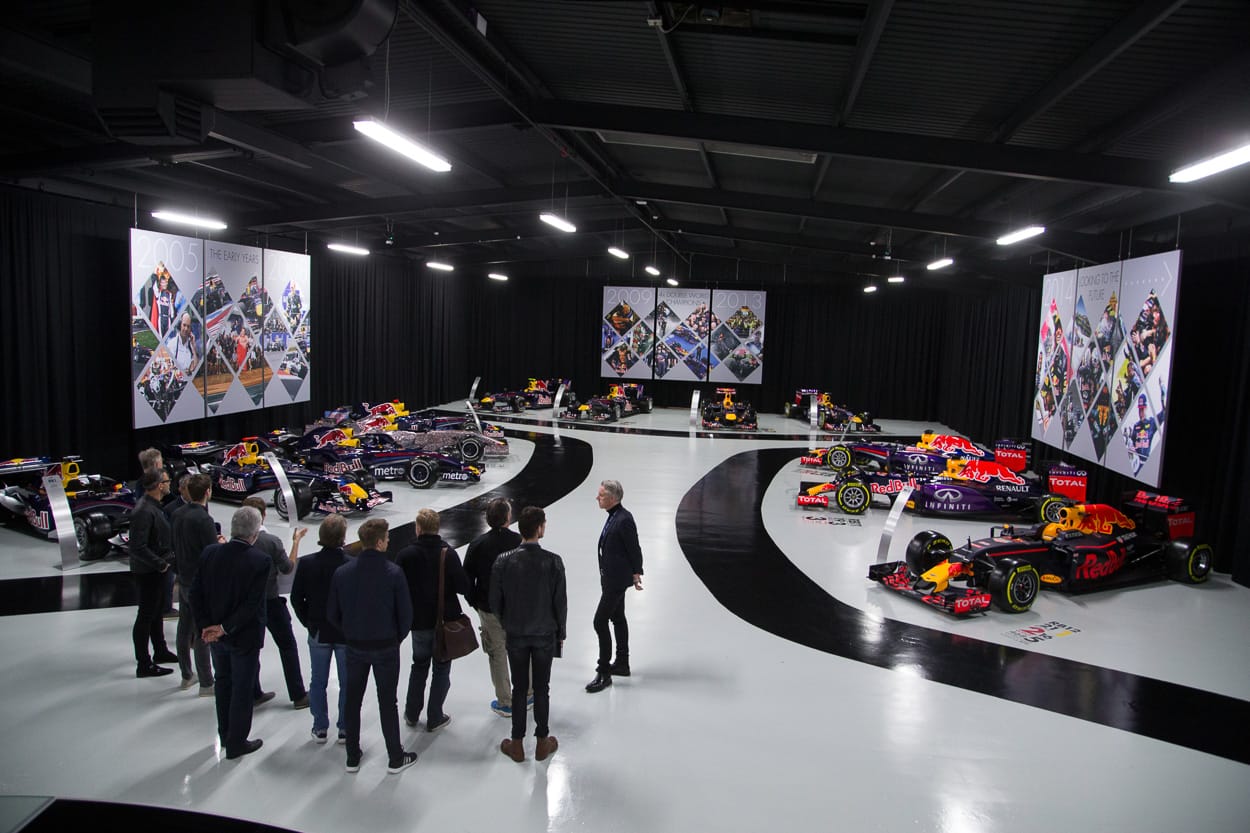 We return to the garage and pitstop testing ground. Here we learn that each of the mechanics have specific physics. Operating the back jack is done by the long guy. For the changing of the wheels you need strength and power. Operating the wheel gun requires you to be small. And operating the front jack is done by the one with the biggest balls we are told. Just as in high end watchmaking where all the work is being done by the same watch maker, in F1 the same mechanics work on either Max’s car or Daniel’s car.

Back at the workshop the special Red Bull Racing editions of TAG Heuer are presented. To celebrate the partnership’s second year, TAG Heuer has released the Carrera Heuer-01 chronograph. This 45 mm steel chronograph bears the team’s colors in red and midnight blue with a blue skeleton dial and sapphire case-back, bearing the Red Bull Racing Team’s logo. Available in two versions either with a steel bracelet or on a blue leather strap with red stitching, resembling a racing car seat. 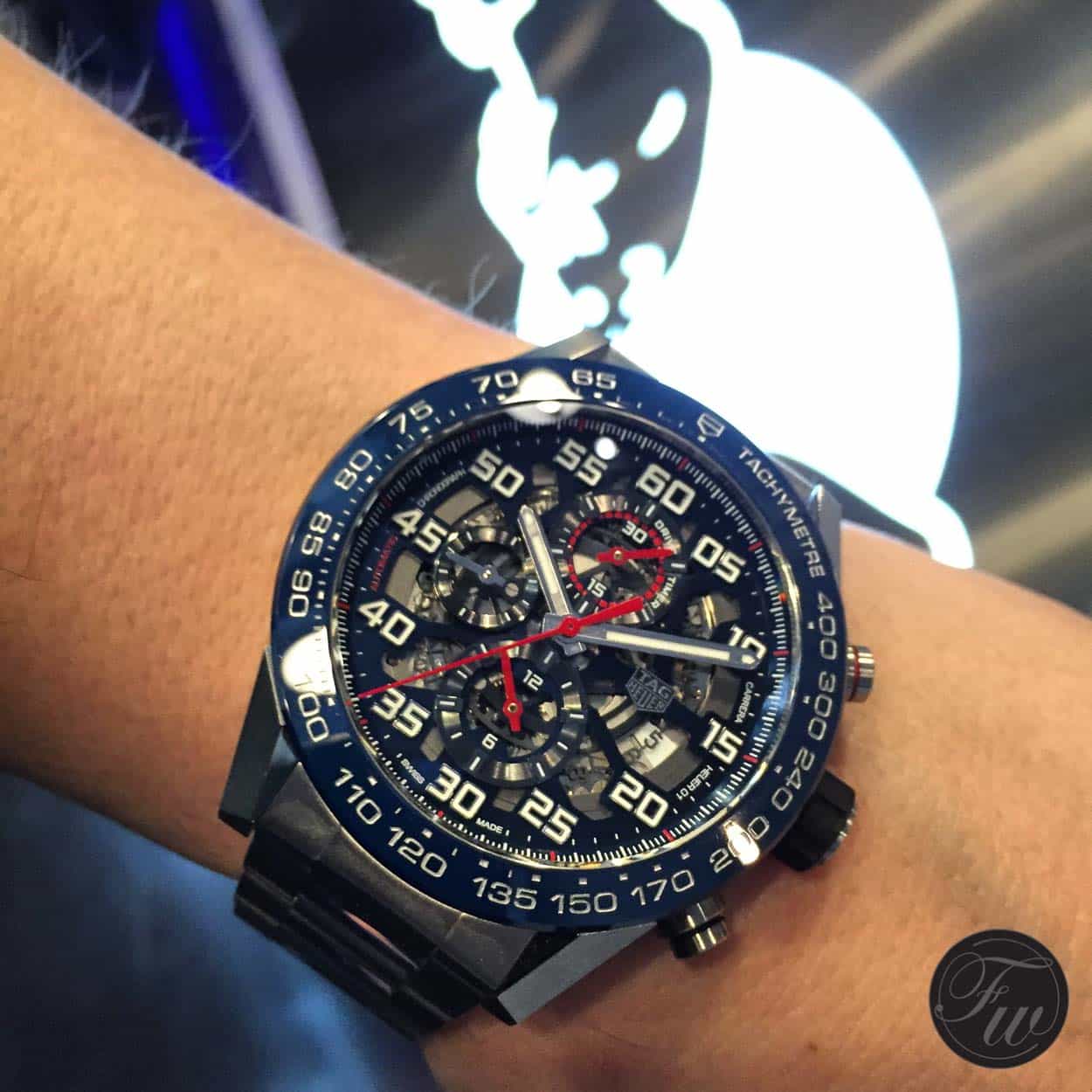