Hands-on With the Baltic Chronograph Bicompax 001

A funny thing happened as I was looking for my Baltic Chronograph Bicompax 001. I thought I had left it in a drawer and, lo and behold, when I went to look, it was seemingly gone. After a fleeting moment of panic – I rarely lose anything and unfortunately keep everything – I recalled that the watch had arrived a few weeks back and at the same time as a few other vintage chronographs that our resident watchmaker Paul had just serviced. You know Paul, the one who has a bespoke watchmaker’s bench covered in Louis Vuitton Monogram canvas? Yes, him. But I digress; I found that the Baltic had made its way into a watch roll next to an old Mulco chronograph, a Chronomat and another vintage specimen.   And the point is that it was rather at home next to these elder statesmen. 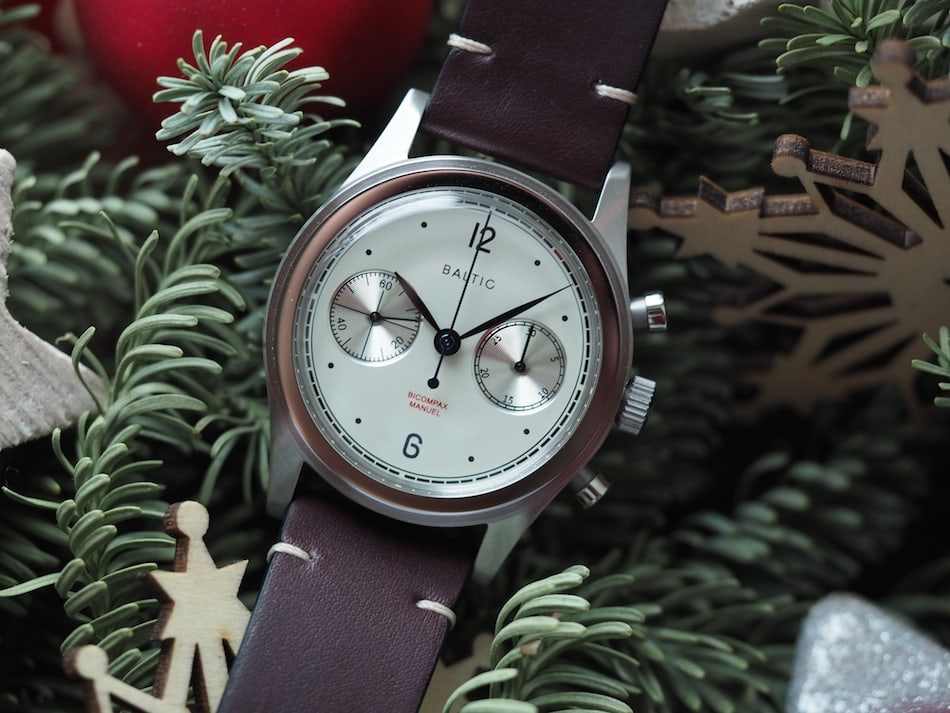 And that really is the point from Baltic (we first took a look at the brand in May), the upstart French brand that released two vintage-inspired watches via Kickstarter in mid 2017. Both the Baltic Chronograph Bicompax 001 and the 3-hand Automatic HMS 001 were huge hits on the crowd-funding site and raised over 500,000 Euros. Some of us had laid eyes, and hands, on the watches at Baselworld 2017 as the owners of the brand made their rounds. Bert, in particular, was impressed and ordered one. Unfortunately, I hadn’t seen one but I did enough reading and looking at the details to decide that putting my own wallet behind one was in the cards. 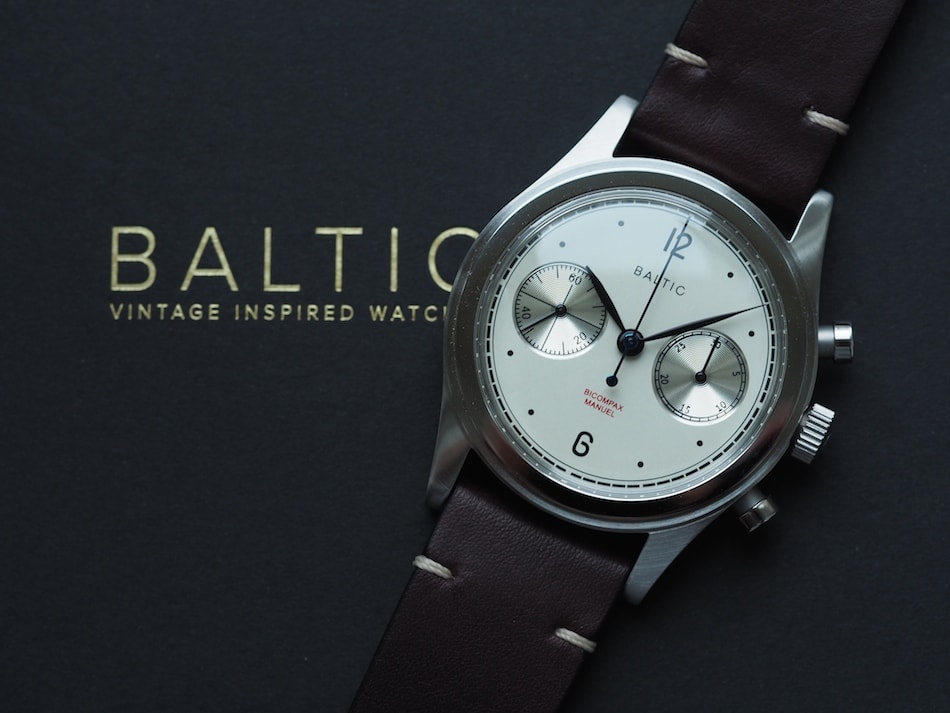 As mentioned, it arrived a few weeks back and was awaiting me in the office after I returned from a business trip. Opening the shipping box, I was greeted with a simple black outer box and a cork-covered internal box. 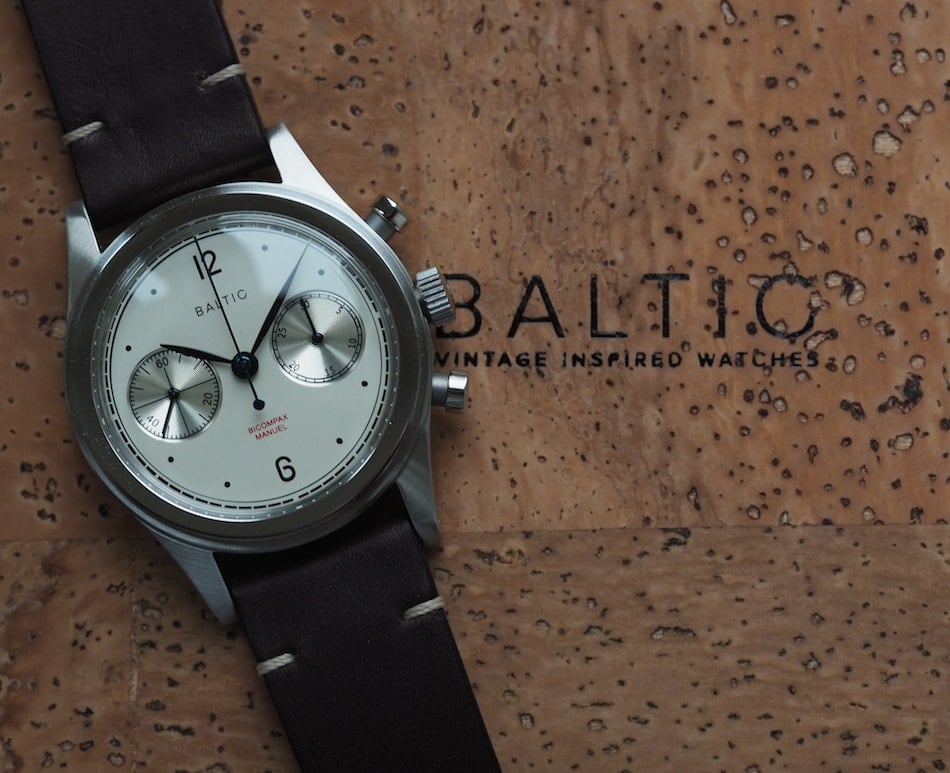 The watch laid inside on a tension ring and the small platform concealed concise instructions in combination with the warranty card. It’s simple and while the cork is a nice touch, this is really all about the watch. And so how did I feel about the Baltic Chronograph Bicompax 001 upon opening it? I was impressed and, yes, it really does feel a lot like a vintage watch. 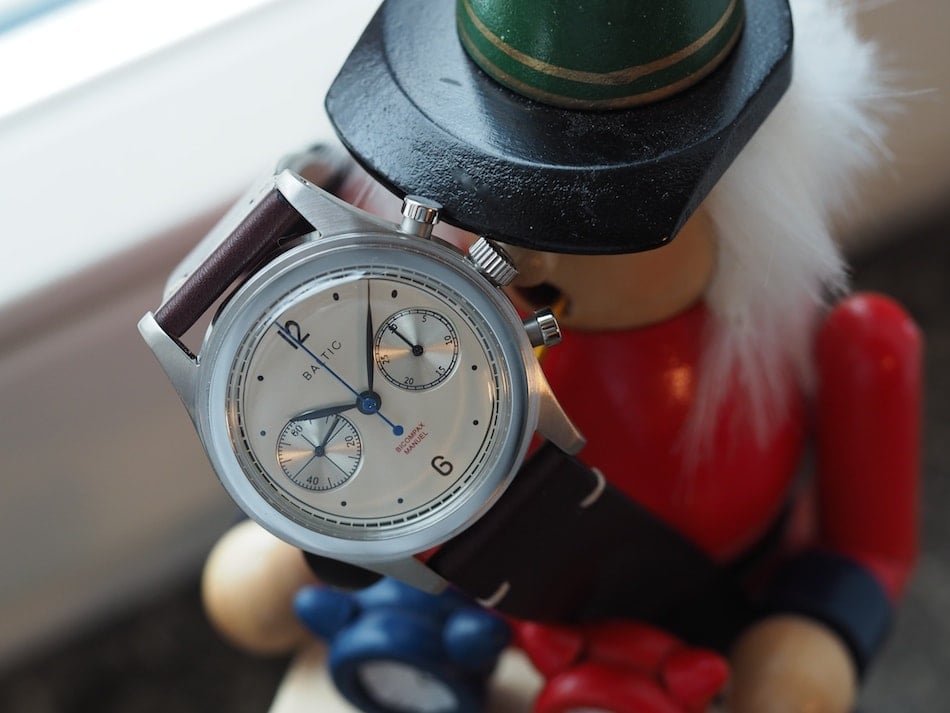 I think I hit the Kickstarter campaign for the Baltic Chronograph Bicompax 001 about midstream and paid around 450 Euros for the watch and there’s absolutely nothing I can complain about for this watch at that price. Today, though, the chronograph sells for 649 Euros directly on the Baltic site, so let’s consider it at that price. 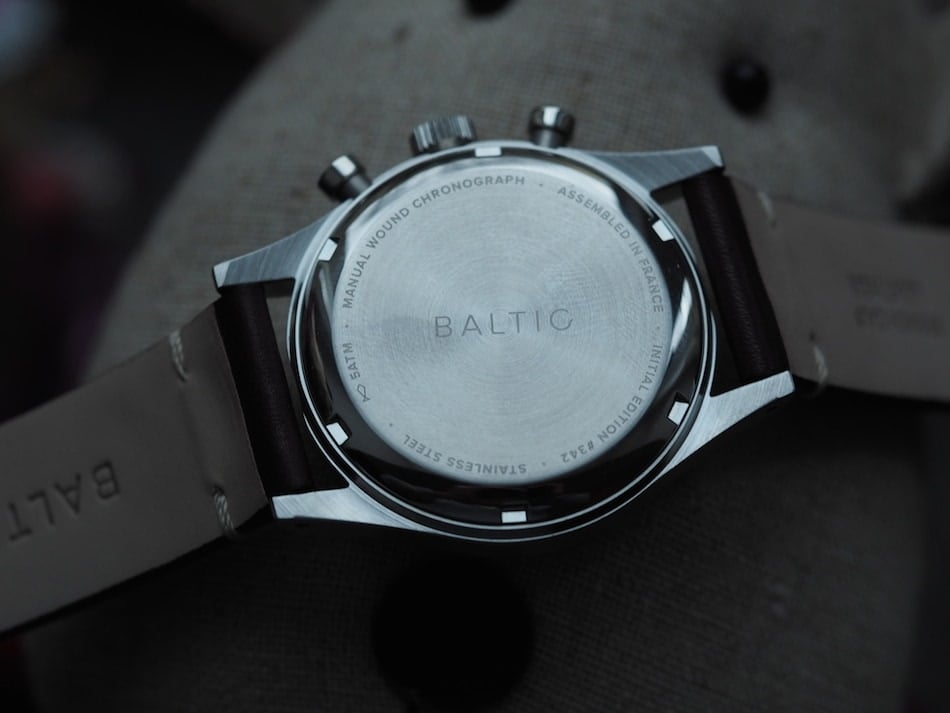 At the price mentioned, there aren’t loads of other manual, column wheel-equipped chronographs on the market. In fact, the only competitor watches that spring to mind are those equipped with the same Seagull ST1901 movement. This movement, a descendant of the Venus 175 (Venus apparently sold the works to the Chinese watchmaker Tianjin in an effort to fund additional developments), can be found in well-known pieces such as the Seagull 1963 (a reissue of a Chinese air force chronograph), the Mercer Lexington (our friends at Worn and Wound pitted the Baltic against the Mercer here) and various others. Pricing for all of these watches range from a few hundred Euros to somewhat near the Baltic. 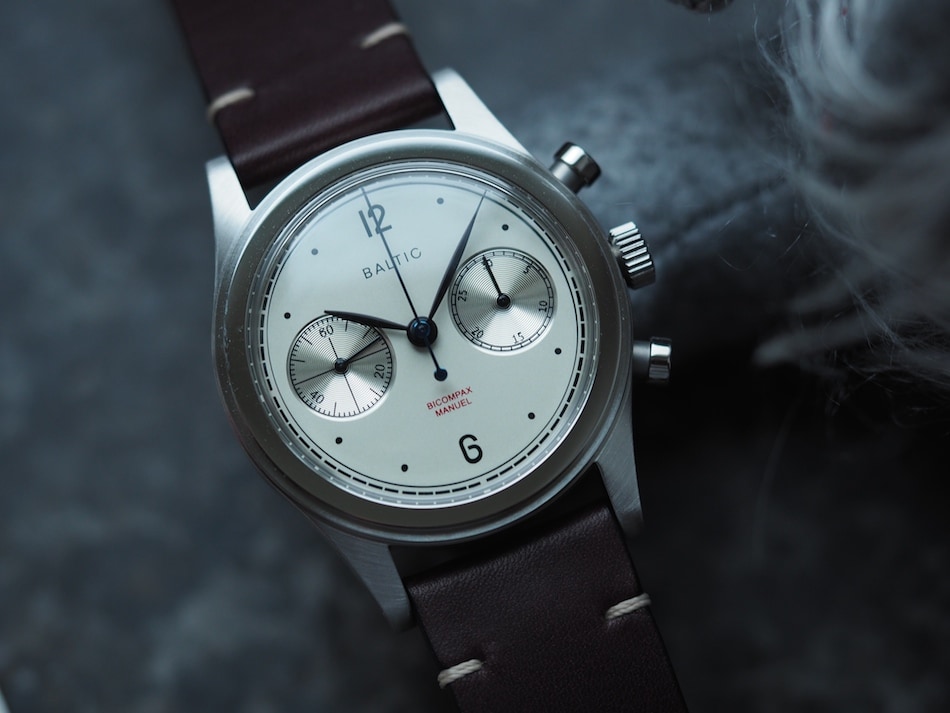 The ST1901 is a controversial movement solely because it’s produced in China and that has led to concerns about its quality and reliability. Admittedly, I’ve even read some horror stories about the previously mentioned Seagull 1963 and its lackluster build. But with the Baltic Chronograph Bicompax 001, the brand has attempted to assure prospective buyers of its quality by assembling the watches in Besancon, France versus simply giving them a thorough check upon importation. The specs can’t be faulted: a hand-wound column wheel chronograph that beats at 21,600, 45 hours of power reserve, a 30 minute counter, and decent finishing. My personal experience is limited, but I’ve found no issues with the watch’s timekeeping, it winds smoothly and the pushers engage with the type of “action” that implies solidity. 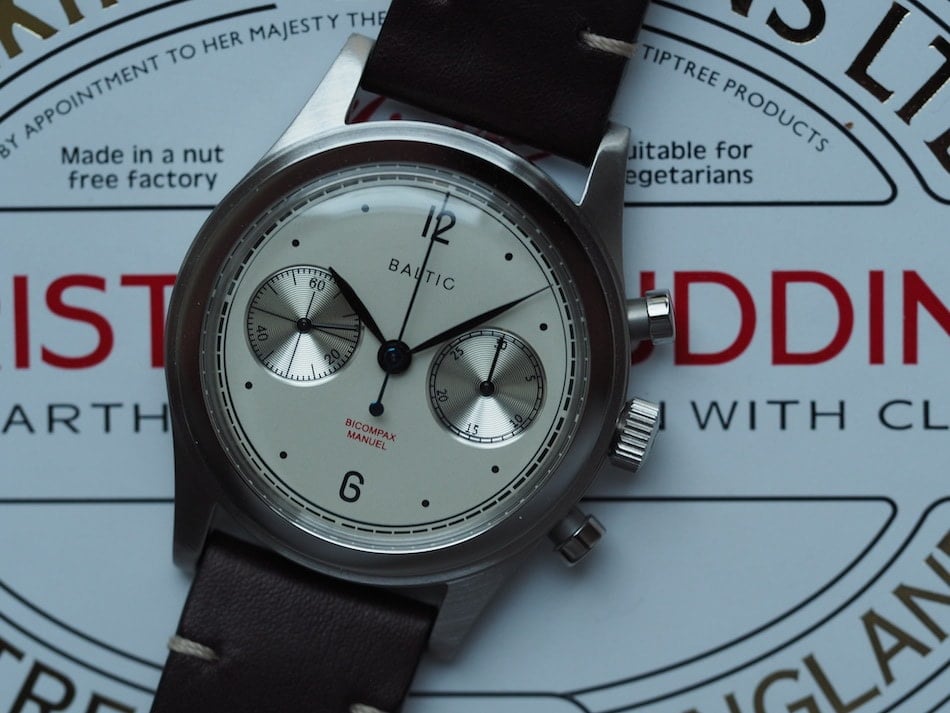 Dial-wise, this was really the draw for me when it came to putting my money down on the Baltic Chronograph Bicompax 001 and it had to be the cream version. Many dial versions exist such as black, blue, and silver and there’s even a gold DLC-plated version, but it was the cream version for me due to its clarity.  Hats off to the Baltic team for designing a clean and simple dial that actually looks retro. 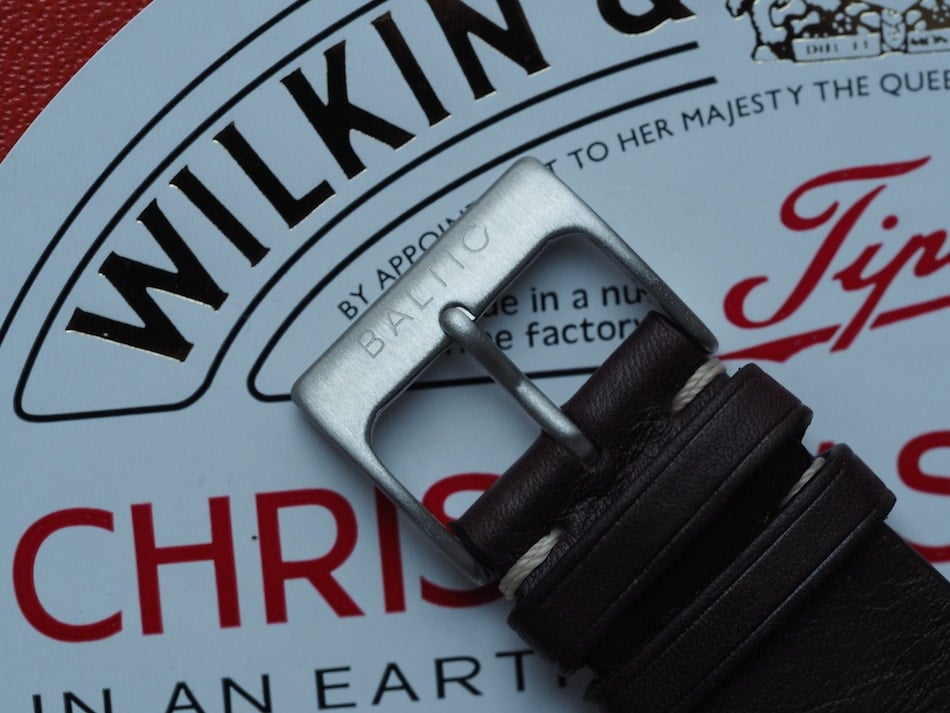 It’s not overwrought with detail, scales, or surfaces and comes off as a nicely baked 1940’s-inspired chronograph. Simple painted details like hour dots, Arabic numerals at 12 and 6 and a subtle black outer track that hides under the edge of the crystal are essentially all that exists against a dial that has an eggshell-like surface. Black hands and a blued central chronograph hand complete the vintage theme. Not to be missed, the Baltic name is unobtrusive and contrasts nicely against red writing above 6:00 that simply states “Bicompax Manuel” – more on that in a moment. 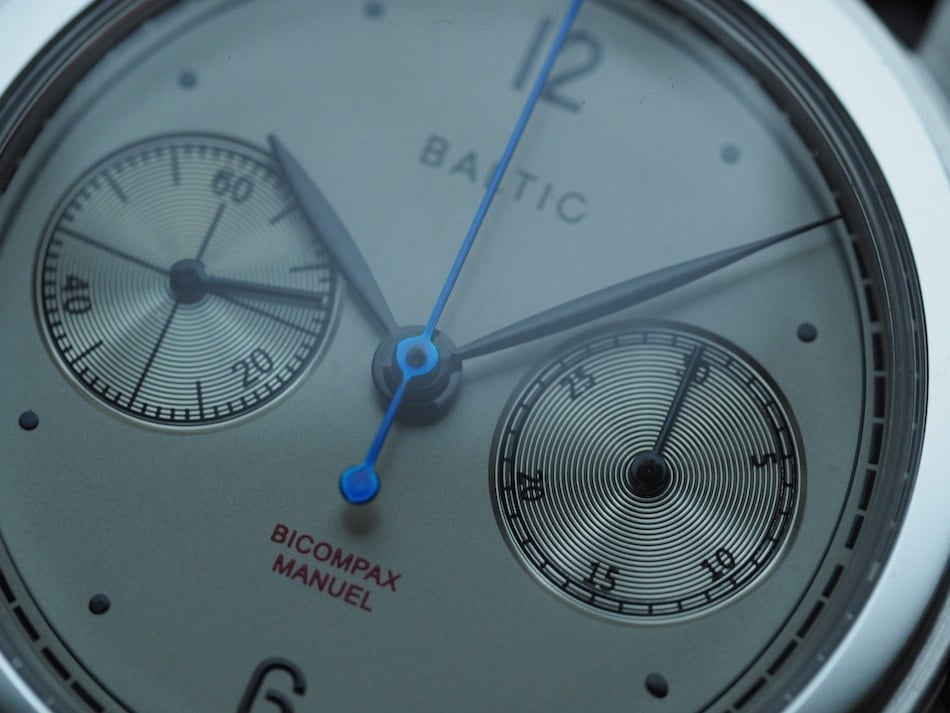 A couple points on the dial have struck some as either inferior or, to true vintage collectors, having missed the mark. The ridged silver subregisters don’t necessarily do themselves justice in all photos and this has led some to call them cheap looking. In person, I actually don’t see this and I find them to line up well against the polished step case bezel. Even the printing looks good. 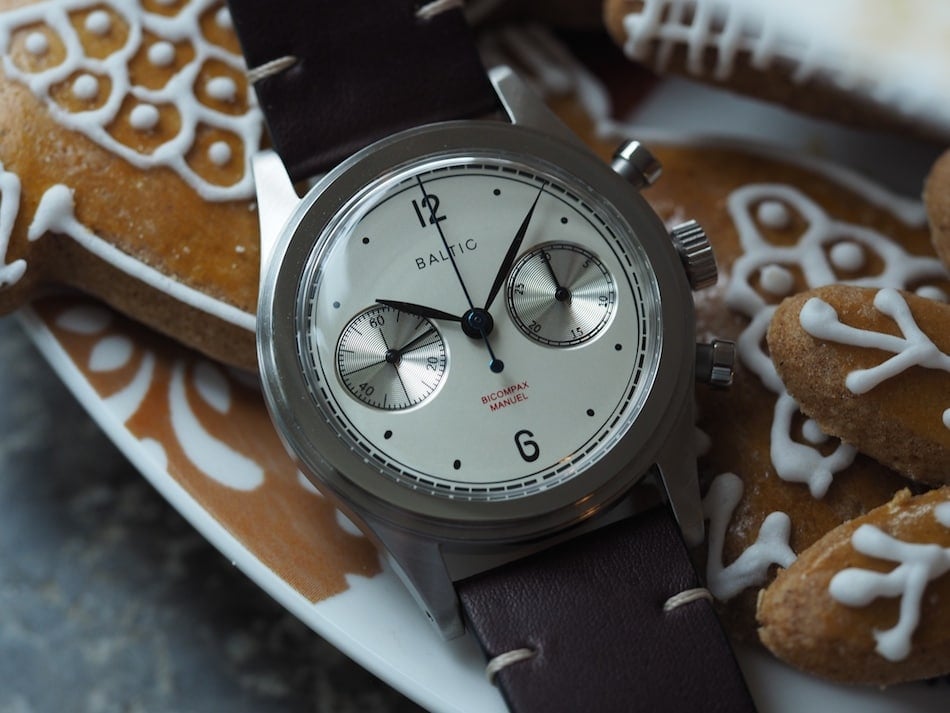 The other detail that frustrates some is the use of the word “bicompax”. Originally used to describe a watch with two complications, the modern watch world has seemingly adopted this definition for chronograph with twin registers. It’s not unlike our newscasters who now use the words “infamous” or “notorious” to exclaim positive fame when discussing a celebrity. In any case, I can get past it (and I obviously did), but I’d rather it say “biregister”. 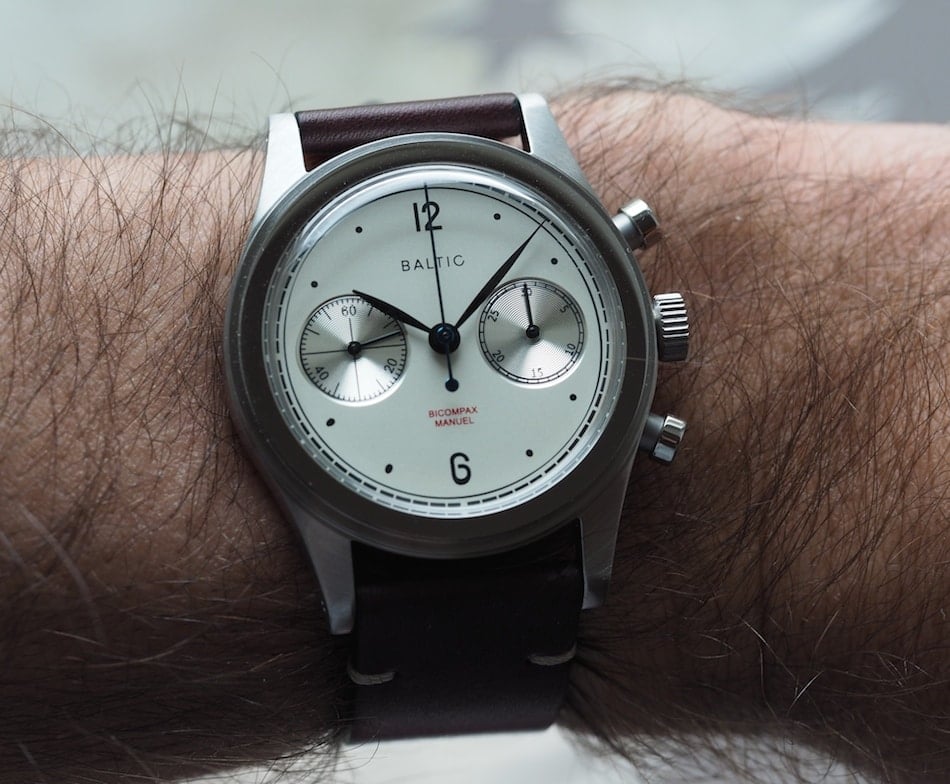 Moving on, the proportions of the stainless Baltic Chronograph Bicompax 001 are spot on. A 38mm diameter case, a 47mm lug to lug width and 20mm lug width all make for a watch size that should be appreciated by all. 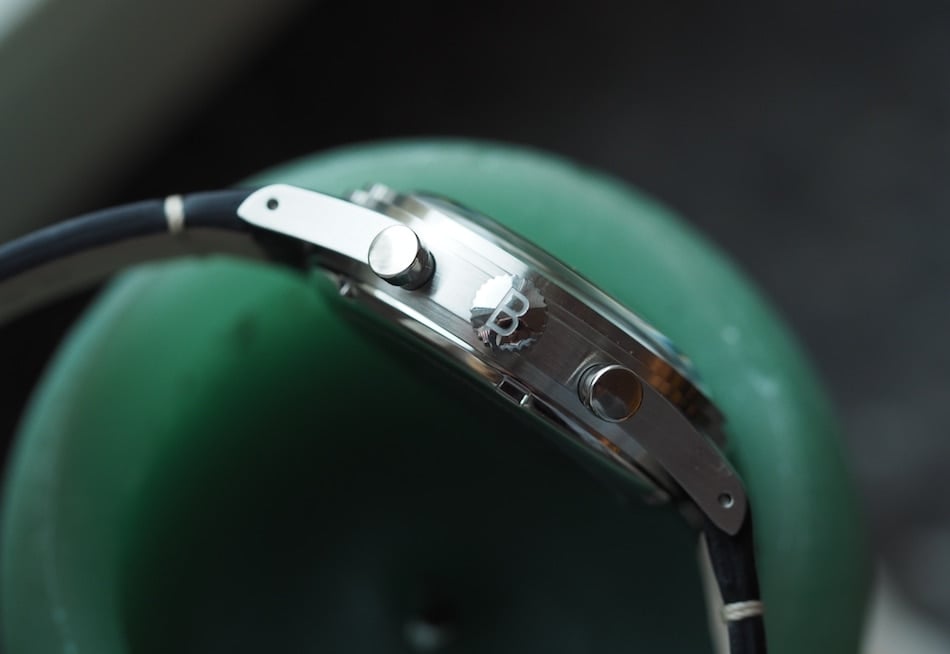 The thickness, including the screw-back and domed hesalite crystal, comes in at a svelte 13.3mm. It fits the wrist nicely and I even like the French calf leather strap, although I like seeing the straight-ended beads-of-rice bracelets some are installing. The short pump pushers and signed crown are also well sized for the case. 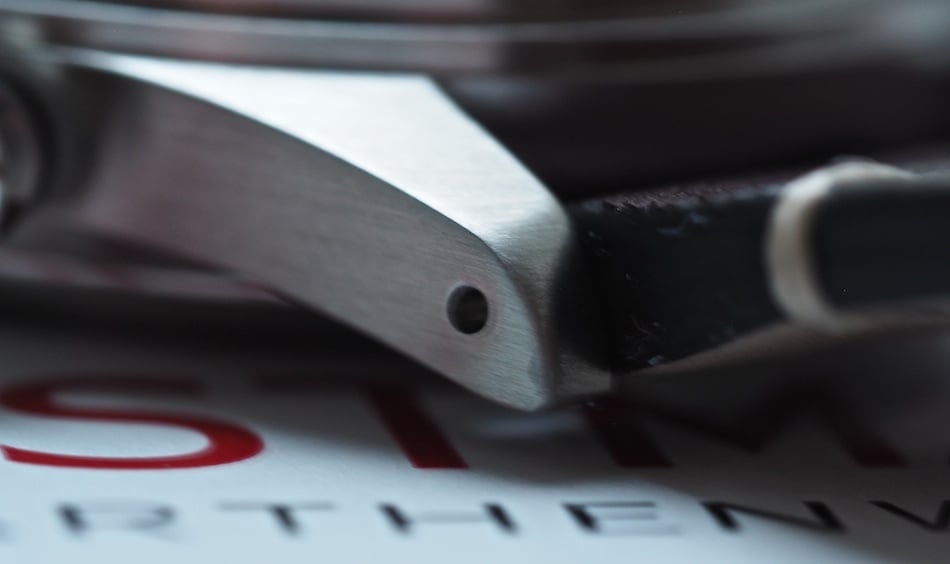 I’m also a fan of the drilled lug holes that makes strap changing a breeze. 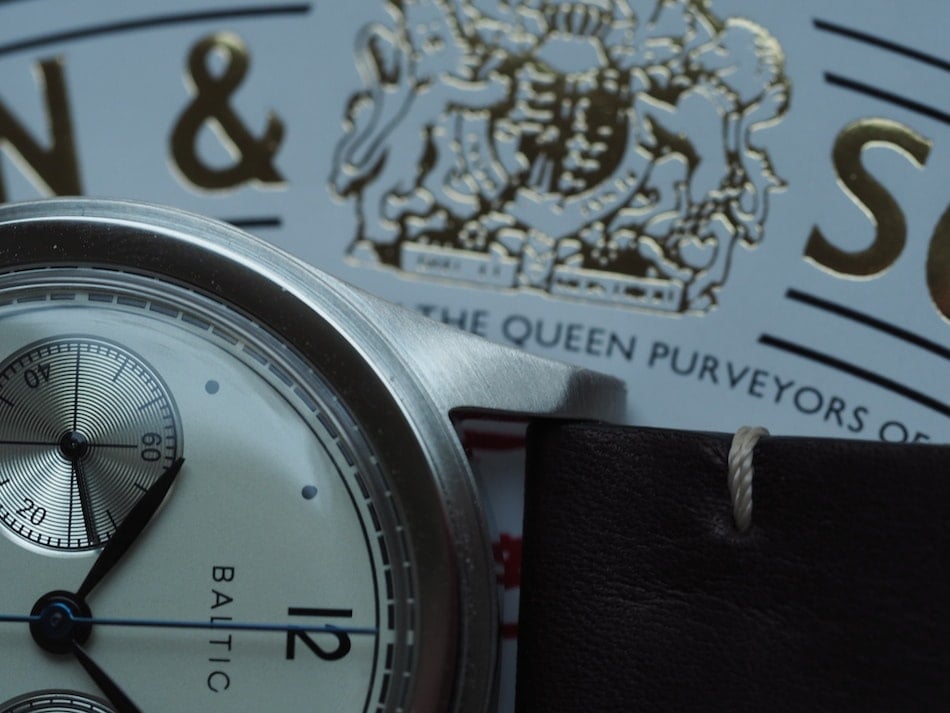 If there’s anything that hints at the Baltic’s pricing, it’s the case finishing. It’s not bad, but it’s entirely matte and I found the finishing a bit inconsistent where the lugs drop down. 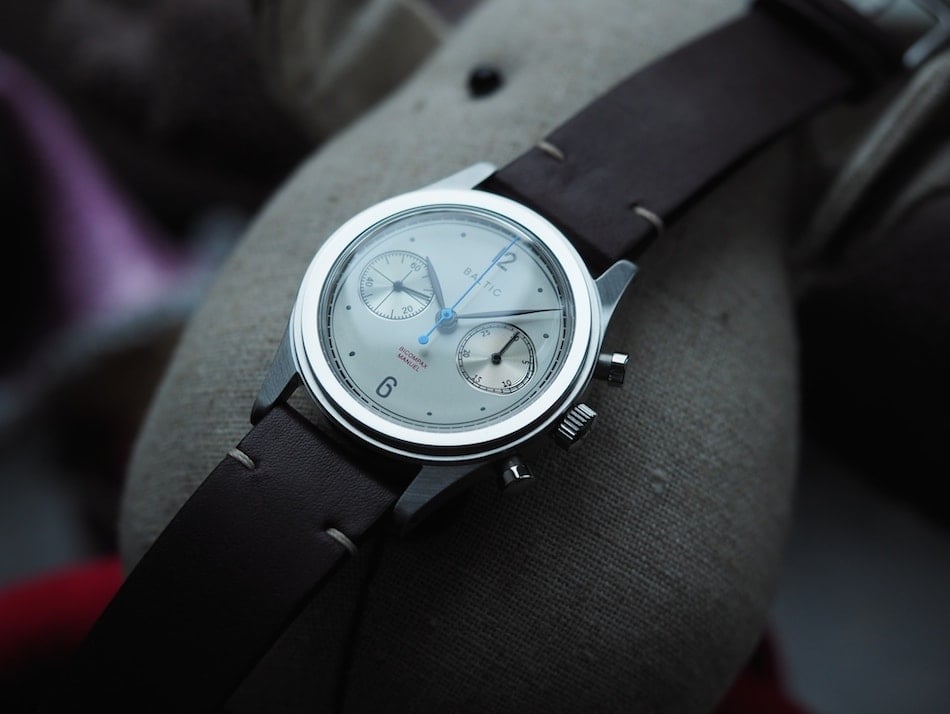 On the other hand, the step case is executed without flaw. 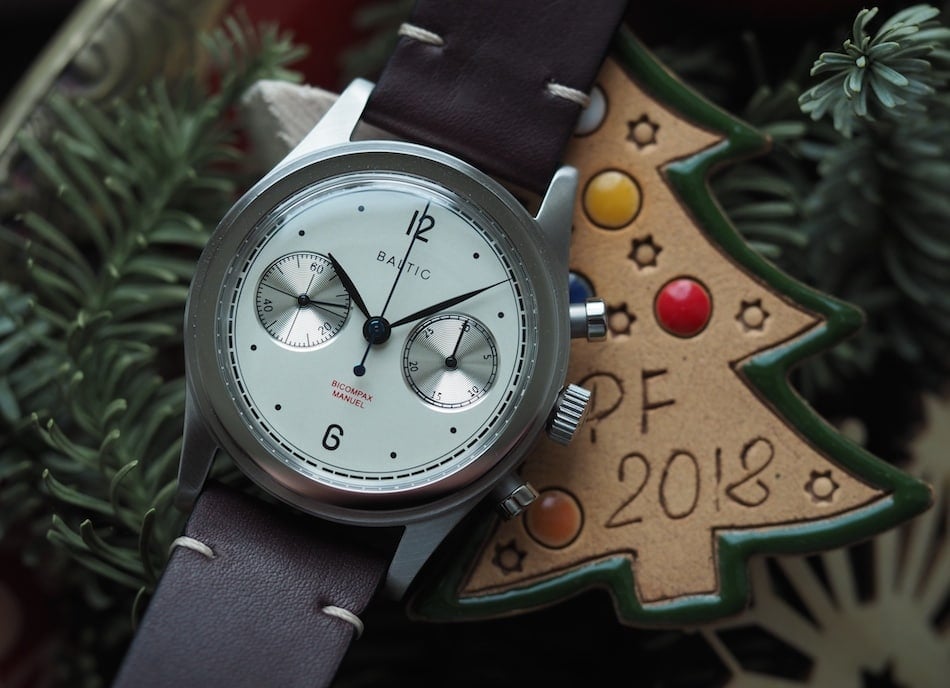 So what do I think about the Baltic Chronograph Bicompax 001 overall? I really like it and I even really like it at 649 Euros. Sure, there are true vintage chronographs at this price, but likely with a mediocre movement, chrome case or in questionable condition. Here, you have a new watch with warranty, one that can withstand up to 5ATM of water, and does a job of looking the “vintage part”. The watch world is an infinitely better place when a well-designed manual wind chronograph is available for well under 1000 Euros. Will the Baltic take the place of any of my antique pieces? No, but it will find its share of wrist time.