After Revolo had a very successful campaign with their first watches, they decided it was time to add a complication (other than a date) to the game. The Revolo Chronograph! In this article we explained the concept of configuring your personal Revolo, so I don’t go into that today.

What you see here is the new Revolo Chronograph with self-winding movement. Revolo will also offer one with a  quartz chronograph movement, but my guess is that your primarily focus are mechanical watches. For those who don’t mind a quartz movement, you can be an early bird for €279 via this link.

Be An early Bird 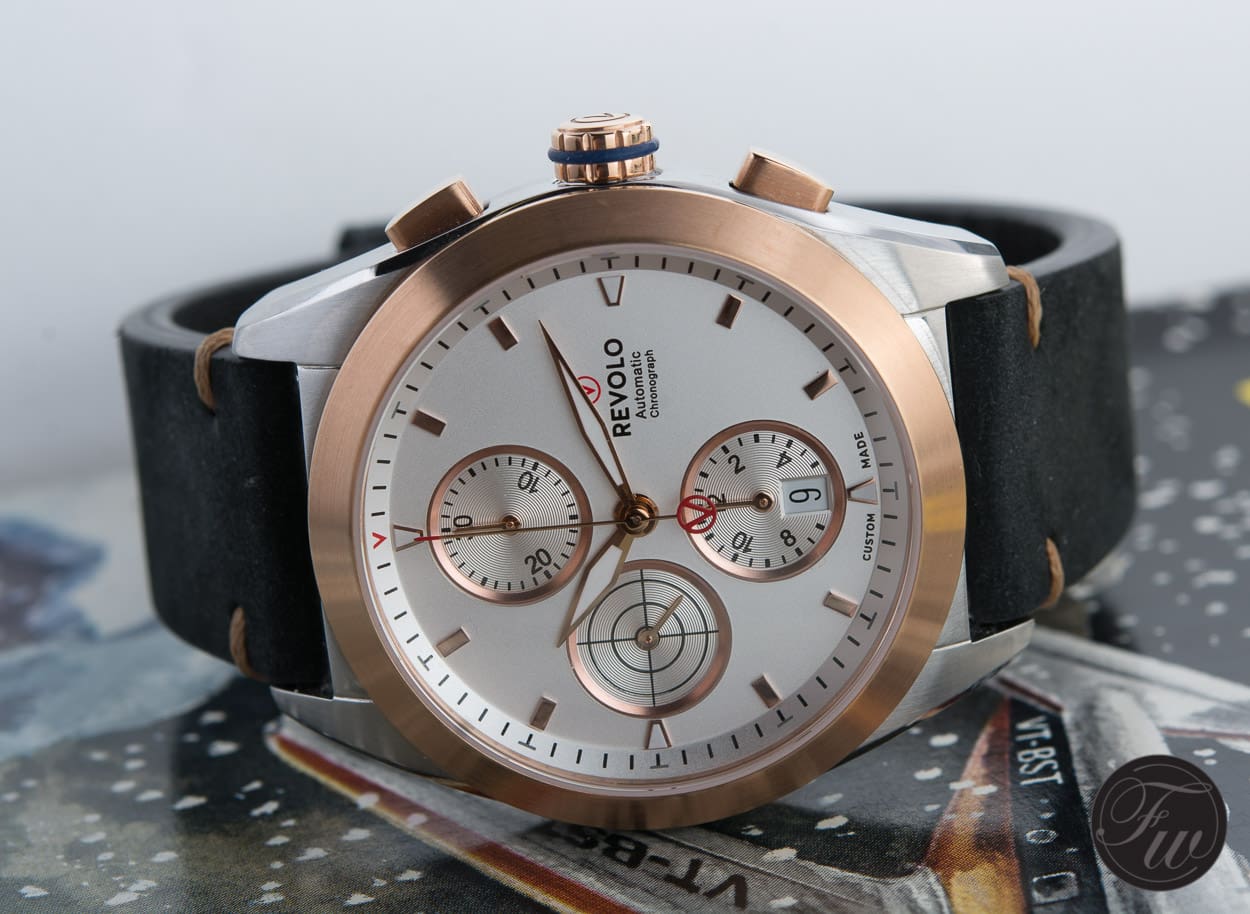 Now, the only condition for this Revolo Chronograph to happen is that their Kickstarter project will meet the goal of €30.000,-. Only being a few Euros away with still a few days to go, I am pretty convinced this is not going to be the show-stopper for this watch. Revolo partly fund their projects via Kickstarter, but it more than just a Kickstarter-brand. They have a network of retailers (brick and mortar shops) where you can customize and order your Revolo watch, but you can – of course – also do it all by yourself while being at home or in the office. It is all up to you basically, freedom of choice.

The customization concept will also be applicable for the chronograph watch by Revolo. Choosing the movement (a Ronda powered quartz movement or a Concepto 7750 chronograph), a dial, hands, bezel, case material, strap and so on. With the configurator you can knock yourself out, creating a Revolo Chronograph with some vintage inspiration as well as creating one that has the state-of-the-art appearance. If you decide to become a backer of their Kickstarter project, you will become the owner of the Revolo Chronograph for €949 (keep in mind that this is the starting price for the mechanical chronograph). You can also choose to become an early bird and design the chronograph watch yourself. The list of Early Bird options and the prices can be found here. After the Kickstarter period, the price will start at €1645.

A Closer Look At The The Revolo Chronograph

Revolo sent us their Chronograph prototype, with mechanical movement by Concepto. You might have heard about Concepto, who are also creating the movements for Linde Werdelin for example. Concepto (like Sellita) used the Valjoux 7750 as a blue print and created their own version of this legendary chronograph movement. Revolo decided to go ahead with Concepto for their mechanical chronograph. The dial lay-out is therefore the same as many Valjoux 7750 powered watches. Sub dials at 12, 6 and 9 o’clock and the name and logo at 3 o’clock. What’s different is that this watch has the date window in the 6 o’clock sub dial, and not at 3 o’clock like many 7750 powered watches have. 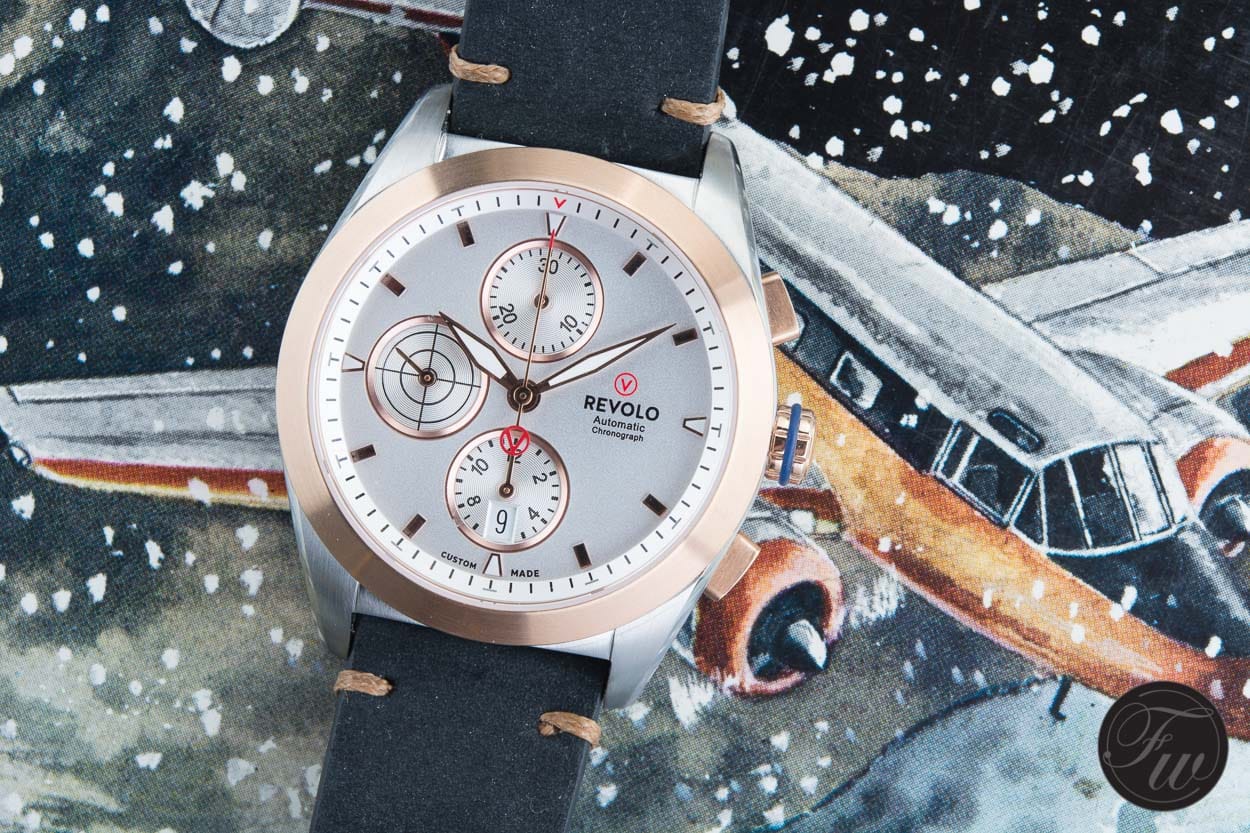 Here you see the stainless steel version with rose gold pvd bezel, crown and pushers. The silvery dial had a lot of rose gold colored elements, such as the hour markers, rims of the sub dials and of course the hands. Turning this watch around, you are able to see the Concepto 7750 automatic movement with gold engraved rotor.  The version I have here is fitted with a matte black calf strap with gold-brown stichting and is equipped with the rose gold pvd double folding clasp. The straps can be swapped without having to use a tool, due to the quick changing system. The watch has a 42mm diameter and is 15mm thick, the lug width is 22mm. 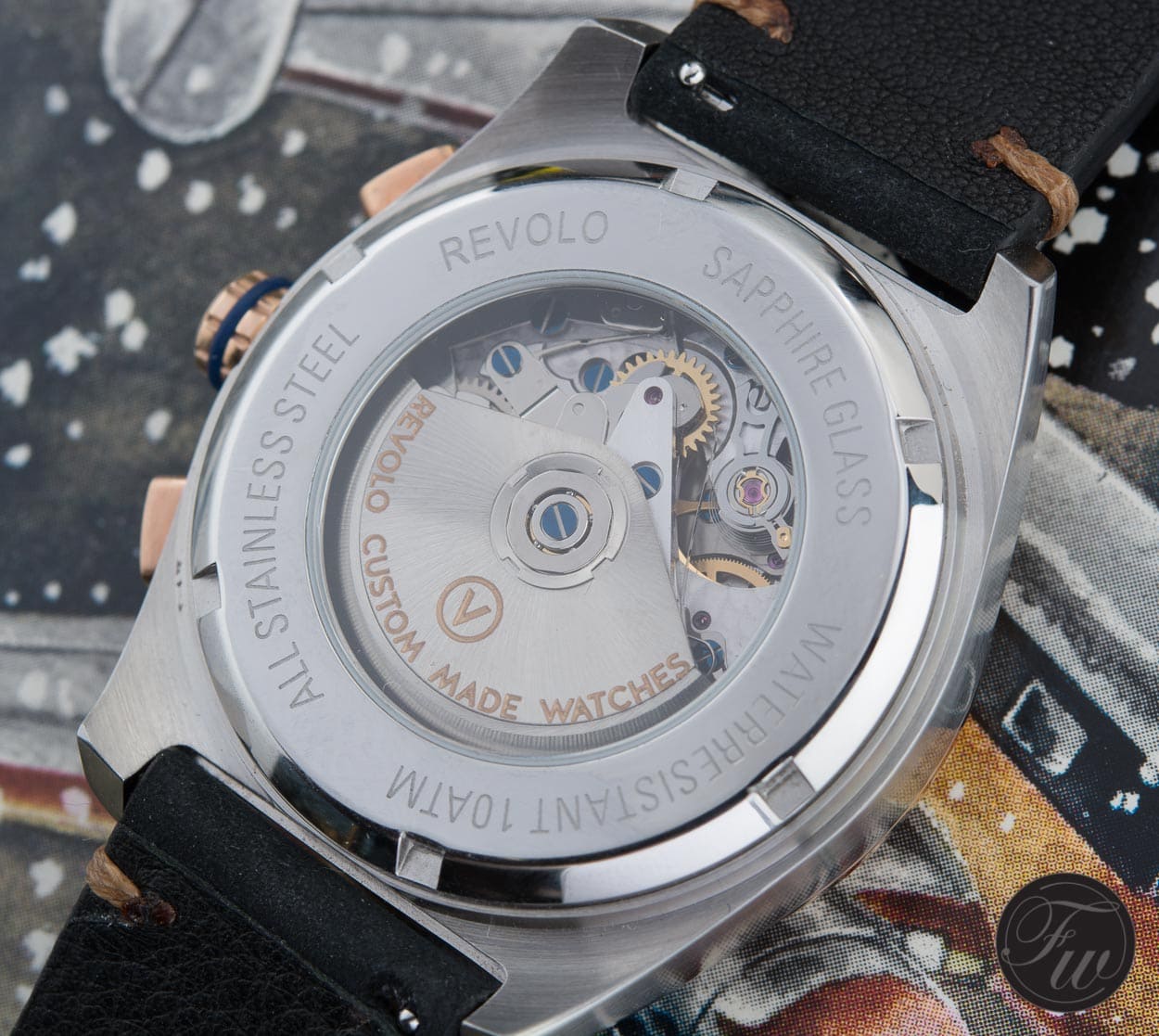 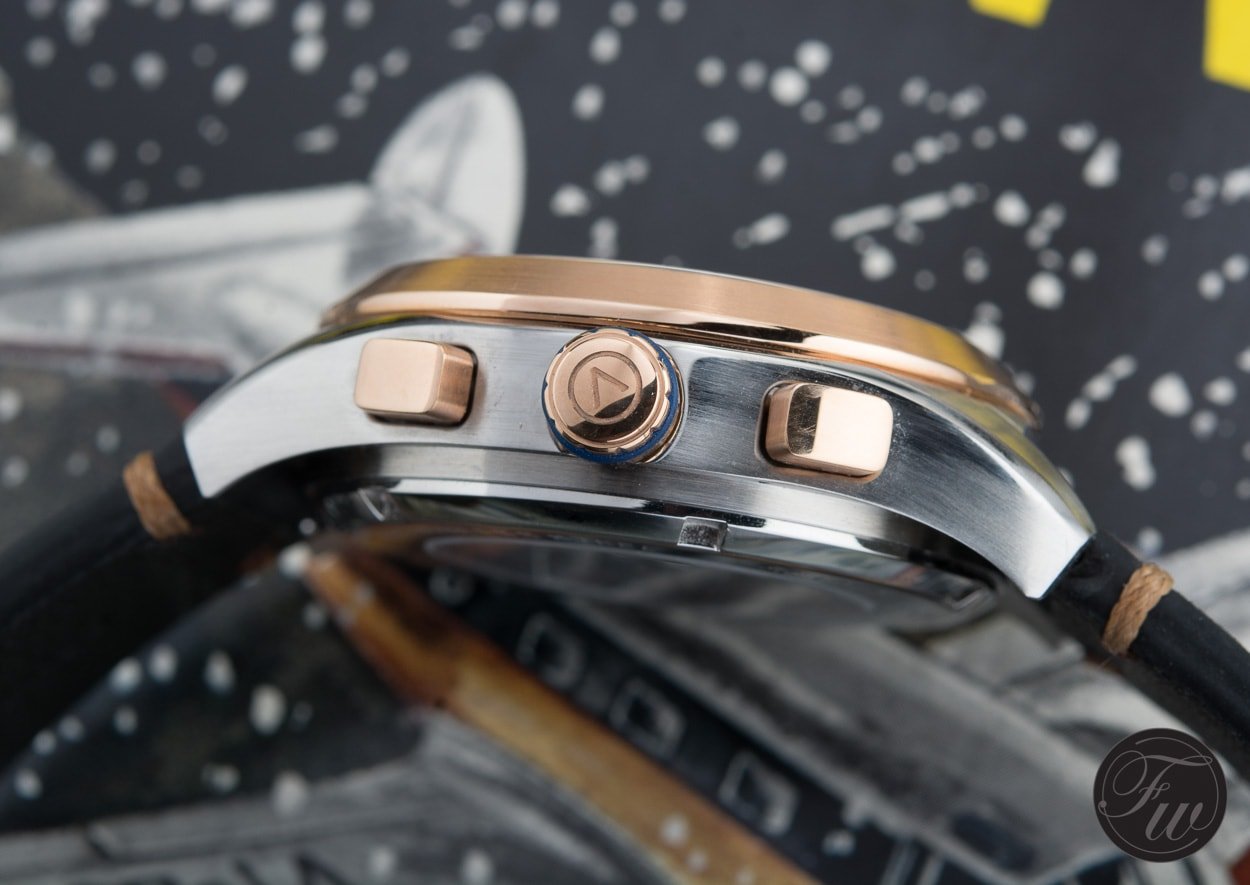 The stainless steel (316L grade) case feels very comfortable, although some people may find it a bit too thick. Revolo claims the case to be hand finished, but the watch I have here is a prototype and has not received its final finishing. Revolo uses a sapphire crystal for the front and there is no word on the crystal on the case back, therefore I assume it will be a mineral crystal. Revolo’s chronograph is water resistant up to 10 bar (~100 meters).

Your watch will be delivered in a large black box that you can customize as well, as shown in our review on the Revolo automatic watch. All watches come with a three-year warranty. To ensure the best service possible, Revolo teamed up with an after sales parter in the USA for US customers and for its European customers everything will be handled from their head quarters in Amsterdam, The Netherlands. I had the pleasure to visit them on two occasions, and they showed me around where they do the assembly of the watch, but also where they have their watch makers and testing equipment. It is good to see that a new brand takes care of its after sales service and processes and puts thought into it before they actually start producing watches. 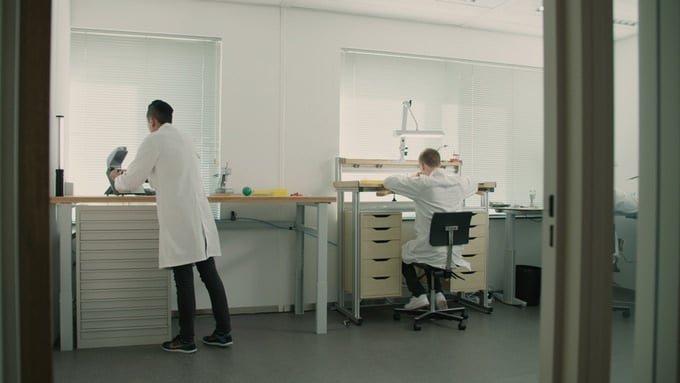 For more information visit the Revolo chronograph configurator to see what’s possible and become an early bird if you want to buy one of their new watches with a huge discount. Delivery of the watches will take place in February 2018.

Hot Topics
Introducing: The Omega Speedmaster Super Racing With Spirate System
165 comments
Design Vs. Specs — Which Is More Important To You When Buying A Watch?
87 comments
New Release: The Limited-Edition Seiko Prospex SLA067J1 Diver
62 comments
My Predictions For New Omega Speedmasters In 2023
57 comments
The Time To Buy Is Now: How The Current Economic Climate Influences Watch Buying And How You Should React
51 comments
Popular
Rolex GMT-Master History And Overview Of All Major References
Robert-Jan Broer
21
New Hamilton Intra-Matic Auto Chrono – An Introduction (with live pictures)
Balazs Ferenczi
13
Hands-On With The Patek Philippe Nautilus 5740/1G
Robert-Jan Broer
2