Robert Downey Jr (RDJ) is famous for his colourful film career, and wacky persona on and off screen.

But, did you know he has also made a name for himself among the inner watch community? Yes, since he flaunted his epic watch collection with a hilarious ramble in a feature video by GQ in 2016 (yeah, including this “questionable” Speedmaster). 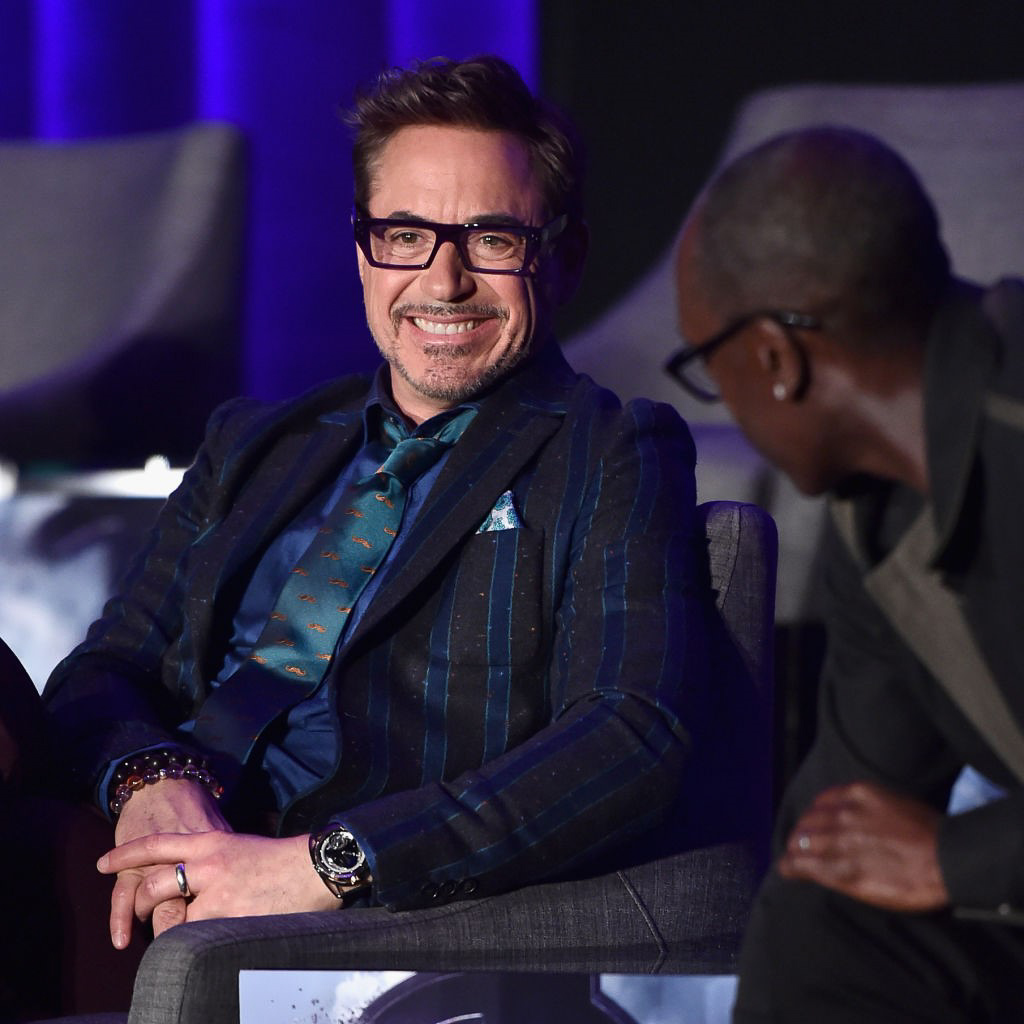 As “Avengers: Endgame,” the big-budget megawatt superhero saga opens worldwide with much fanfare and fireworks, I can’t seem to escape the influx of social media images of RDJ’s wrist game. That says a lot given that I am not a WIS. Within the space of a couple of weeks, he has been seen wearing two watches made by De Bethune whilst hanging out with his fellow Avengers during the global press tour. Then at the world premiere in Los Angeles, he swapped it back to his old favourite Urwerk, donning the UR-111C Black Cobra.

Urwerk and De Bethune! RDJ’s taste has certainly evolved and refined since 2016

I can see the connection. Both are independent brands thriving at the cutting-edge of fine watchmaking. They are the mutants with off-the-chart watchmaking prowess. They make next level space-age watches without selling hypes and sending prices soaring into space (nothing wrong even if they did…ahem Richard Mille). Although their appearance may seem ‘out there’, very little is apportioned to non-functional elements. These are intelligent and incredibly serious timepieces. Bravo, RDJ! 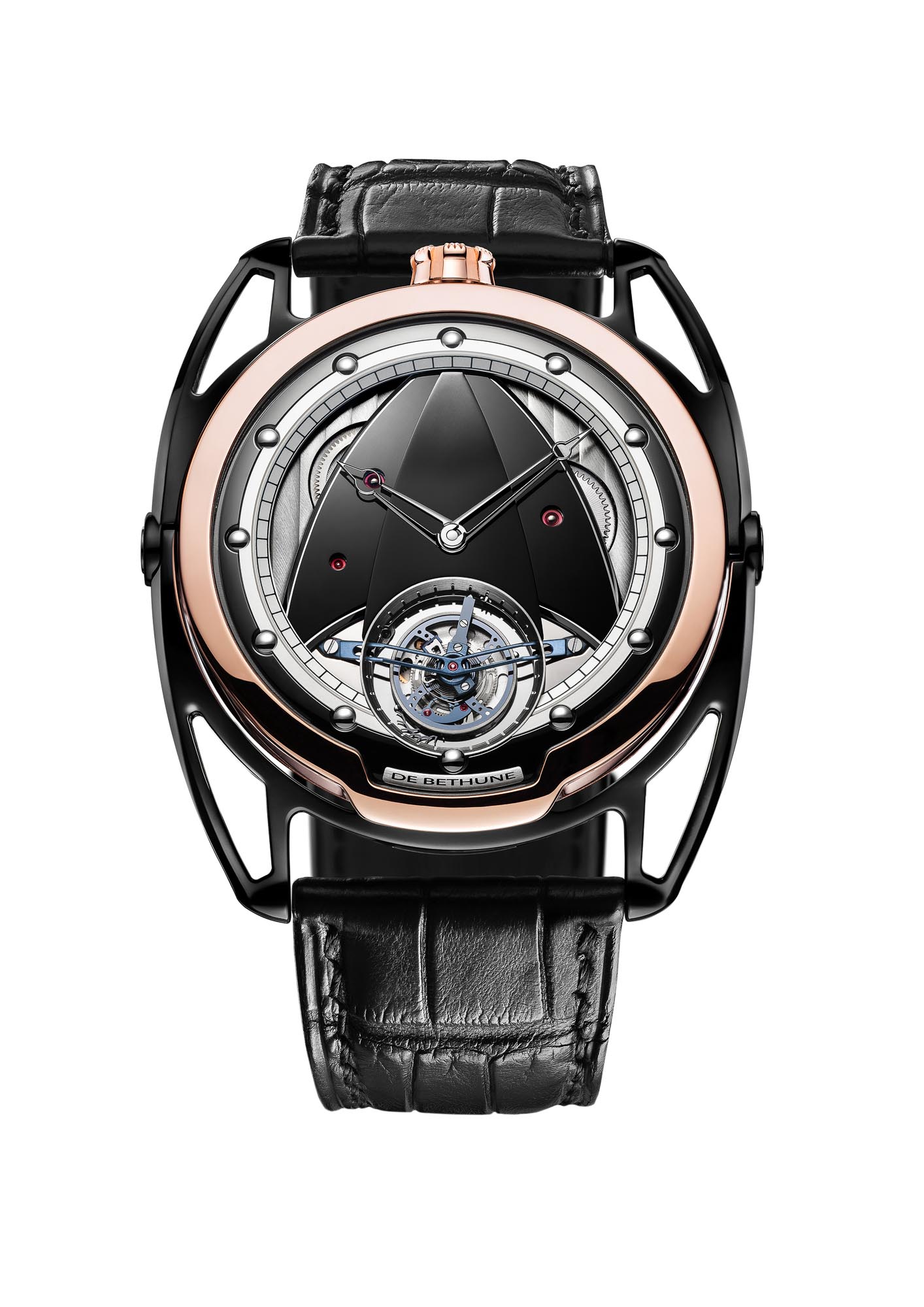 Now, let’s start with the story behind Robert Downey Jr’s association with Urwerk. Previously, RDJ was known for wearing an Urwerk UR-110 for the duration of Spiderman: Homecoming. As you’re probably aware, the actor’s most famous character of recent years is Iron Man a.k.a. Tony Stark. Tony Stark is a genius mechanic. His house talks to him. He’s that kind of guy. He’s also pretty attractive; thanks to the heady combination of his beautiful face/renowned status as a billionaire. Legend has it RDJ models the character on real-life billionaire Elon Musk of Tesla and SpaceX fame.

Unfortunately or otherwise, Robert Downey Jr knows it. It stands to reason that his watch would be similarly brazen and confident. The Urwerk UR-110 – with its lightweight, blackened titanium case body and rose gold bezel – was always the perfect choice for Iron Man. But without the actor’s own initiative, it never would have made its way onto the character’s wrist. RDJ asked his outfitters to reach out to the Switzerland-based brand and request a loaner for the duration of filming. 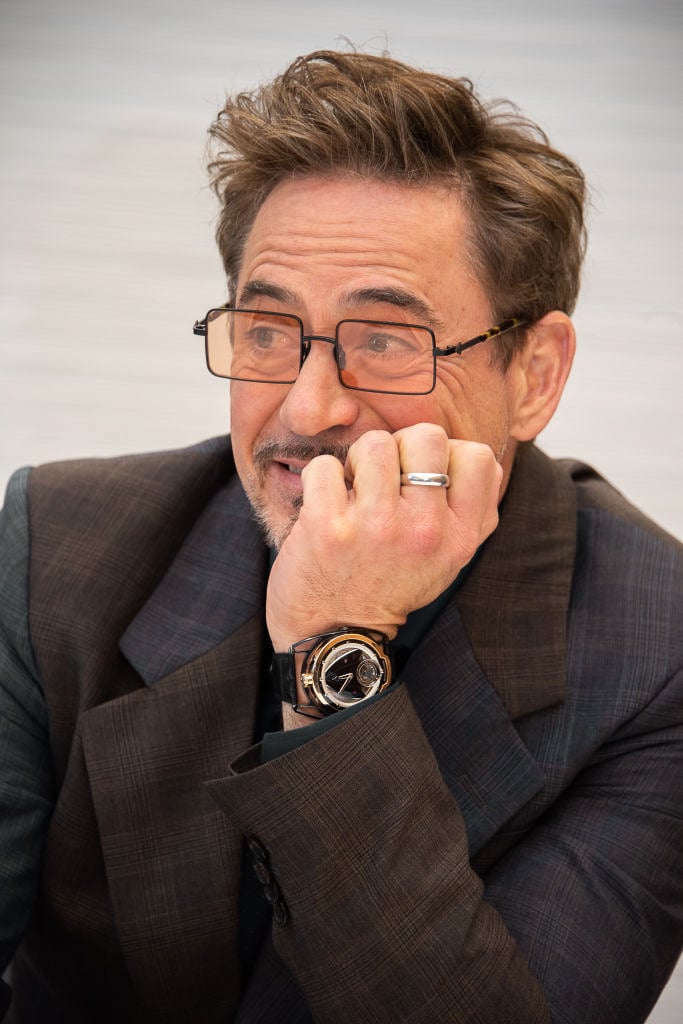 So unlikely seemed the request, that the communications department of Urwerk initially dismissed the request as a hoax. Were it not for the persistence of Marvel film studios, this marriage may have dissolved before it occurred. At the end of filming, Urwerk were so enamoured with the project (and RDJ himself), they made him his very own UR-110 to keep (a watch that was auctioned off last year for $150,000 which was donated to the Manusodany organization, benefitting disadvantaged children in Haiti).

As faithful a servant as the Urwerk UR-110 was, it was clearly time for an update. De Bethune is a brand that has always pushed boundaries. It is one of a handful of brands that perfectly suits the de facto leader of the Avengers, with its trailblazing aesthetic and enthralling technology, implemented in endlessly beguiling ways.

Two De Bethune watches have been chosen by RDJ together with his stylist. Both models come from the DB28 collection. References DB28TIS8C6PN/S and DB28TRS8ZN/S (boasting moon phase and tourbillon complications respectively) are perfect examples of the brand, and both housed in the flexi-case of De Bethune, that enables rather large watches (that would be quite uncompromising on the wrist were they fitted with fixed lugs) to be worn by the brand’s more diminutive fans. Remember, although both the Urwerk and these De Bethune watches look very comfortable on RDJr’s wrist, the man himself is only around 174cm tall. 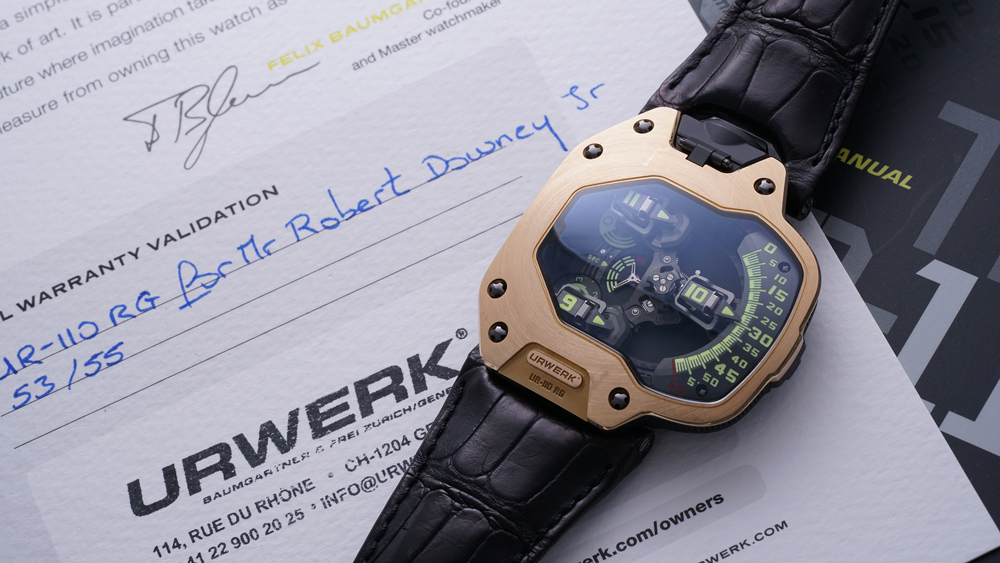 The Urwerk UR-110, for example, uses Urwerk’s famous satellitic time-telling system, which although initially appears complex, is surprisingly simple. And that is really the key to good design. To take something complicated, and make it understandable, and even intuitive. The time display of the Urwerk UR-110 looks unintelligible at first. After a week on the wrist, you start to wonder why you ever bothered reading time in a different way.

The housing of the UR-100 is the kind of luxurious futurism rarely seen, and ever less commonly executed so well. When you look at an Urwerk, probably the first thing you notice is how different they are. But because that difference is not born of error, rather a very deliberate design remit that is akin to an entirely separate branch of evolution to our own, these pieces end up looking more alien than they do off-base.

De Bethune presents a slightly different prospect as a brand, and their watches show this entirely. Yes, these are objects of the future, but they are not examples of a craft reimagined. Rather, they are extremely refined examples of extending and stretching what already exists. If we were to imagine that the Urwerk UR-110 and the D28 series are both run-of-the-mill watches in the year 2100, De Bethune would be that era’s equivalent of steampunk design. 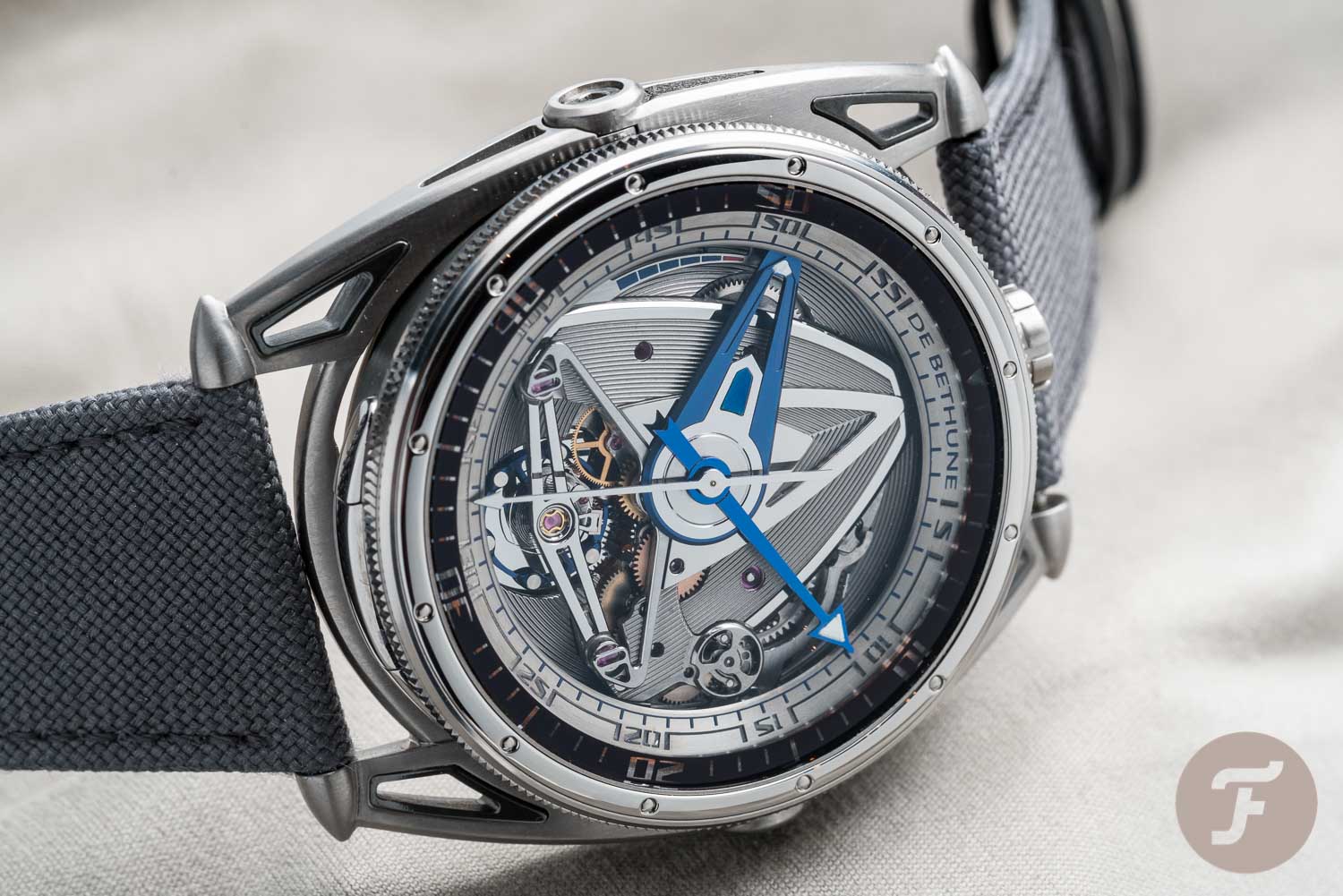 Polished cases, precious metals, seemingly flawless displays, but still with an emphasis on wheels and pinions, on jewels and teeth, on mechanical elements quite okay with shouldering the grunt-work of time-keeping. That’s what De Bethune gives us. And it’s especially notable when these elements are displayed alongside beautifully executed complicated elements such as the polished 3D moon phase at six o’clock on the DB28TIS8C6PN/S.

It’s a reflection of our time as celebrity champions with such high profile as Robert Downey Jr, are actively seeking out and making ‘independent’ choices, above all others. No talk of bribery or nepotism here. No sir, this is genuine appreciation, and that really counts for something.