Do you like Lamborghinis? Come on, admit it. As a kid, you probably had a poster of a Countach in your bedroom. If you’re older, you desired a Miura, and if you’re younger, it was perhaps a Diablo or a Reventon. Isn’t it strange that saying you like a certain Lamborghini model is frowned upon in certain circles, but declaring your love for, let’s say, the Ferrari Testarossa isn’t? It’s like stating you lust after the Roger Dubuis Excalibur MB Black Ceramic 42mm. Why is that considered a no-go in certain watch circles? It’s an interesting matter to discuss in the coffee corner this morning. After that has been addressed, you can also throw in the puzzling hyper-reality of NFT watches or a historical Henri Grandjean pocket watch before the coffee is finished.

I once wondered if I could pull off the maybe outrageous and certainly exuberant €153K Roger Dubuis Excalibur Eon Gold. I found out that I could. And with that knowledge, I confidently strapped on the Roger Dubuis Excalibur MB Black Ceramic 42mm. In comparison to the gold tourbillon model, this is a not-so-complicated version in a very sober case. The case sizes, shapes, and design are identical — 42mm with an edgy, notched bezel and remarkable triple lugs. Yet, in gold, it’s a provocative creation, whereas it’s way more toned down in shiny black ceramic. Dare I say that a precious-metal Excalibur with a tourbillon is like a V12 Lamborghini Aventador in orange, while the Excalibur MB Black Ceramic has more in common with the smaller, V10 powered Huracán? Yes, I dare, also because the watch brand and the Italian sports-car manufacturer are in a close partnership. 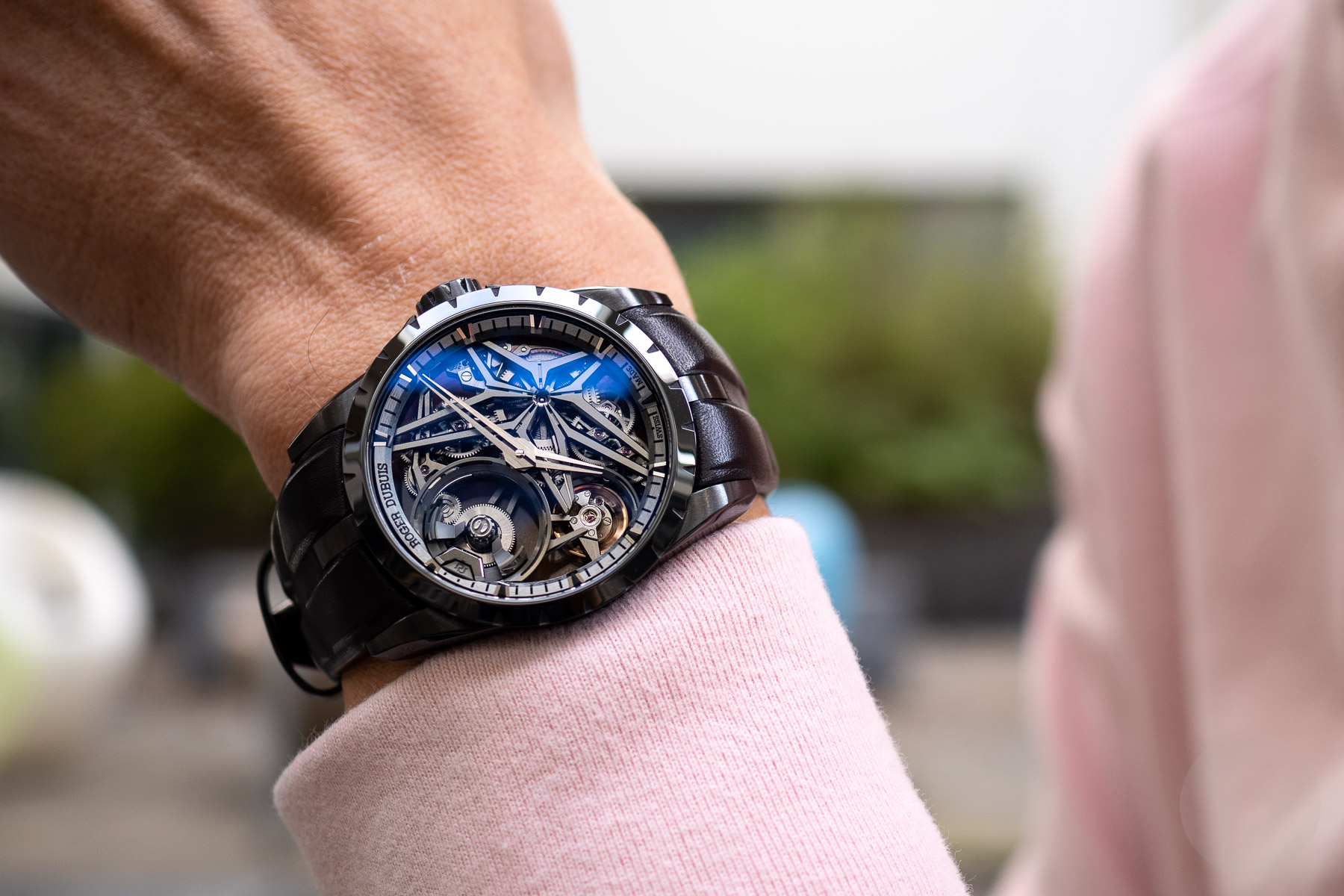 At Roger Dubuis, they make hyperwatches for hypercar fans. I don’t mind hypercars at all, so maybe that’s maybe why I have a soft spot for Roger Dubuis Excalibur models. And the very black MB Black Ceramic 42mm — the abbreviation stands for Monobalancier; a single balance wheel – is a very likable watch. I mean, even the Fratelli at HQ, watch lovers with, let’s say, generally more conservative taste, were impressed when I pulled the Excalibur from the rock, I mean, box. I “blame” it on its all-black attire. The triple lugs are not as conspicuous, and neither is the edgy bezel. And the open-worked movement is now truly and literally the star of the show. 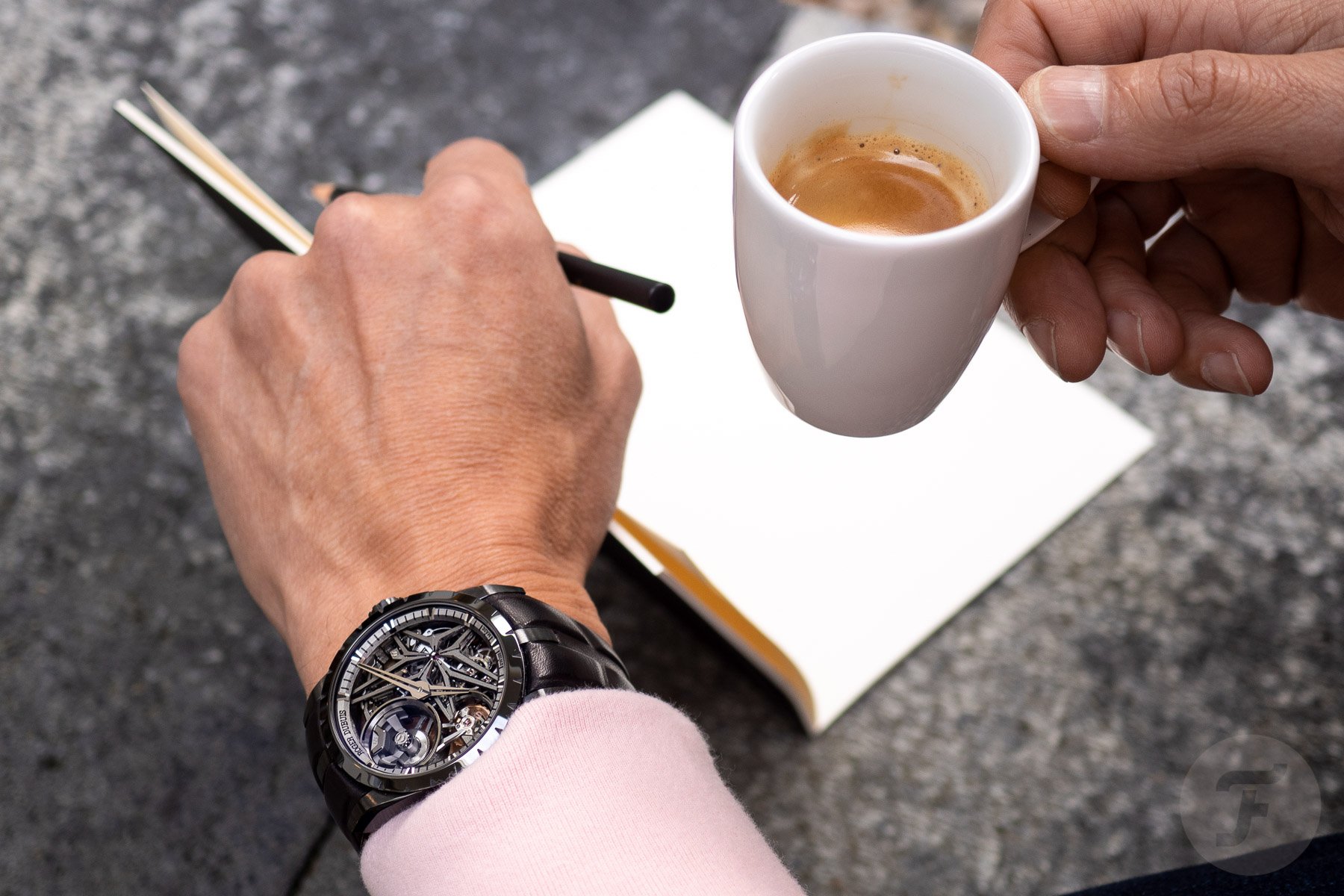 The new and improved Excalibur in its sharpest form ever debuted during Watches And Wonders 2022. Mechanical and aesthetic improvements go hand in hand at Roger Dubuis. The automatic RD 720SQ caliber, with its micro-rotor that looks a bit like a piece of LEGO Technic, got upgrades to the escapement wheel, balance wheel inertia, and pallet stones. And while they were at it, the technicians at the Meyrin manufacture tuned up the power reserve to 72 hours. 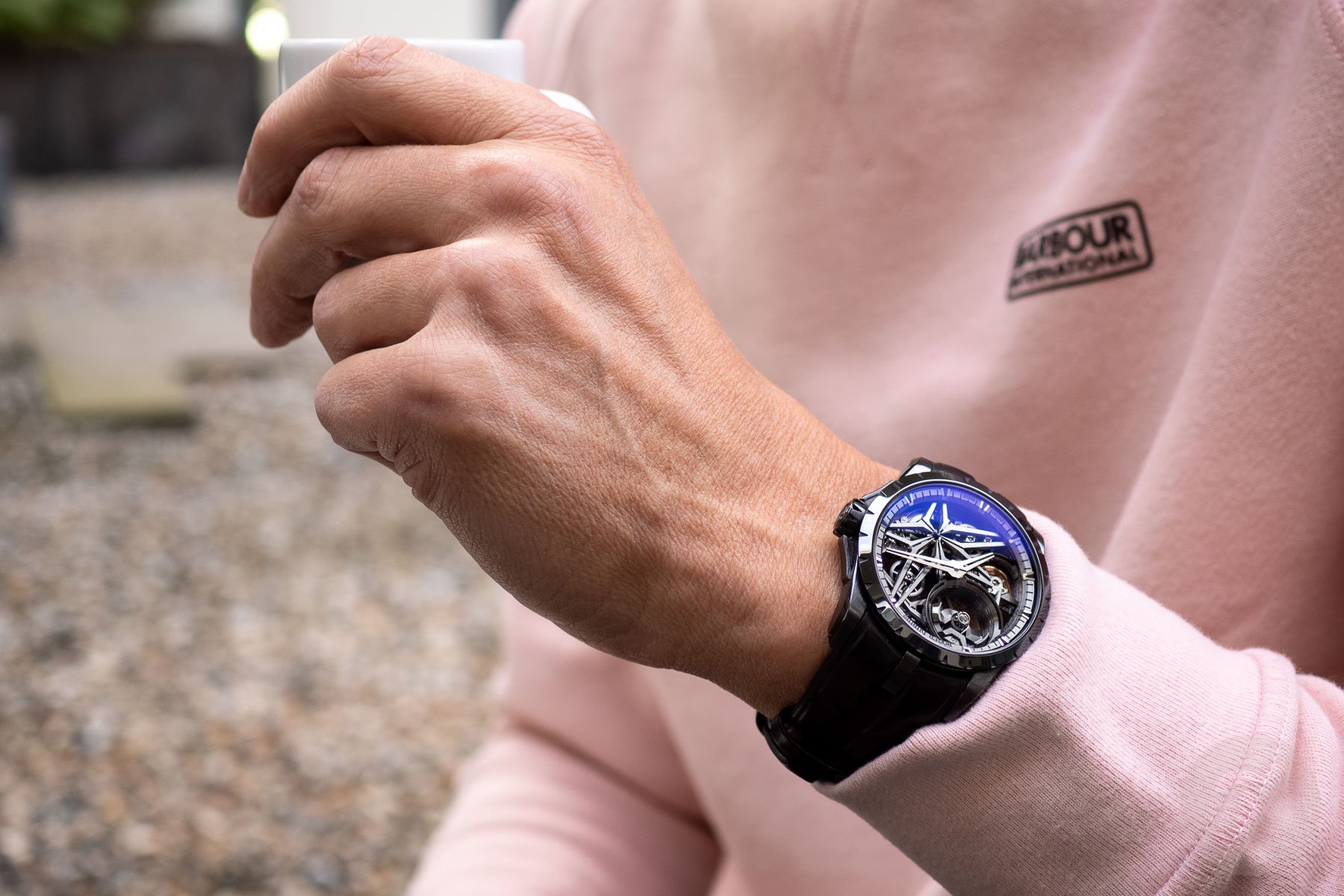 The aesthetics of the movement also received a makeover. The redesigned signature star now seems to float above the barrel. Looking at the movement through a loupe is a joyful experience. There are sand-blasted decorations to be found, satin-brushed surfaces, and polished beveled edges. And the decoration is of the highest level, hence the Poinçon de Genève certification. Even without a loupe stuck to your eye, looking at the see-through dial is a captivating experience. And those giant, twin-blade, sword-shaped hands do the name of the watch justice and look menacing in a cool way. The watch is very easy to read too thanks to its XL hands and the gray hour markers with Super-LumiNova. 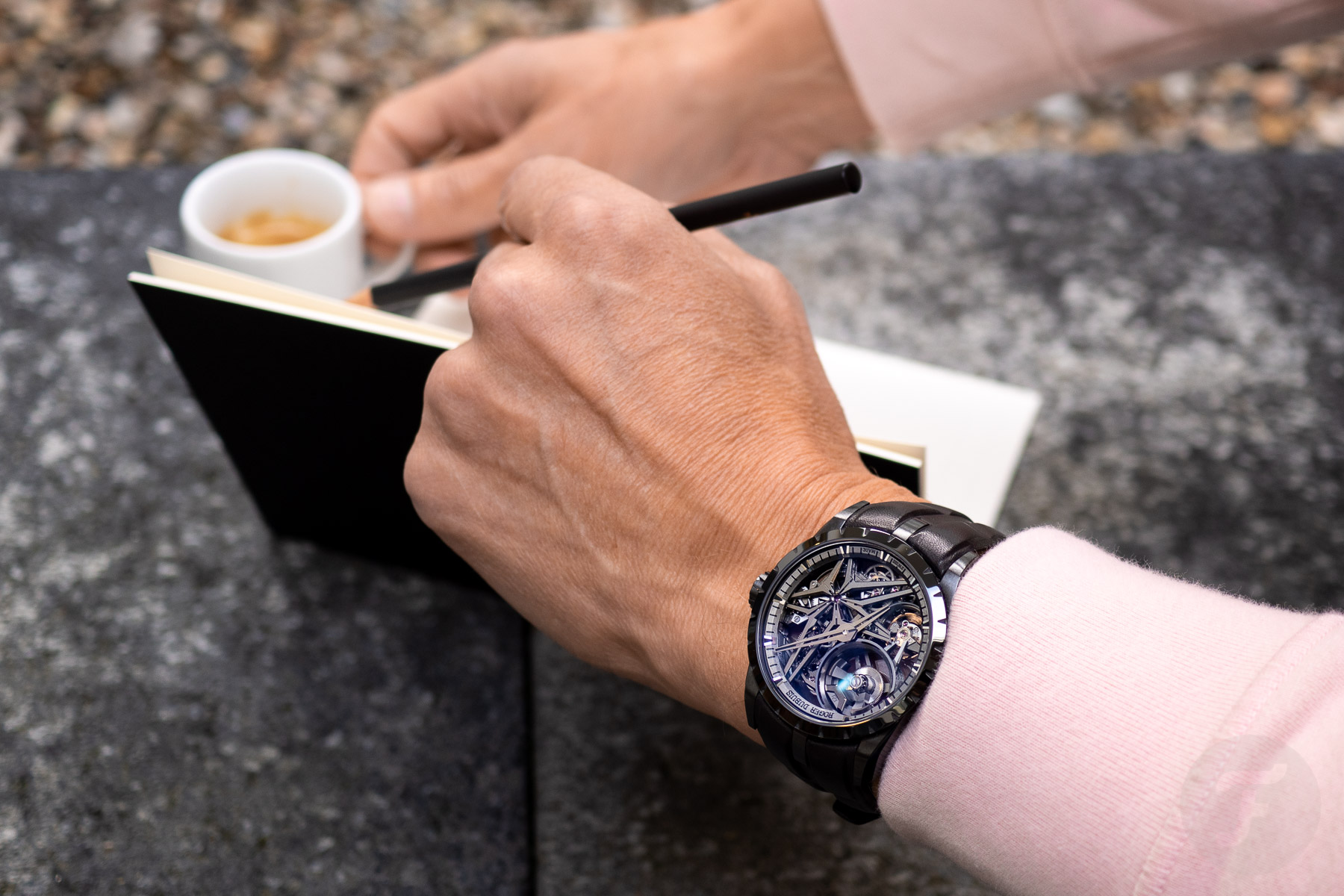 Wearing the Roger Dubuis Excalibur MB Black Ceramic 42mm is easy as pie (how appropriate when you’re enjoying a coffee while discussing this provoking watch). That’s because of its moderate measurements, but the soft, embossed black calf-leather strap with a triple-folding clasp in black DLC titanium also plays a part in that. What’s also quite comfortable is knowing that if I fell into the deep blue while wearing the €73,500 Excalibur, the watch wouldn’t break a sweat (or a seal) until 100 meters down. 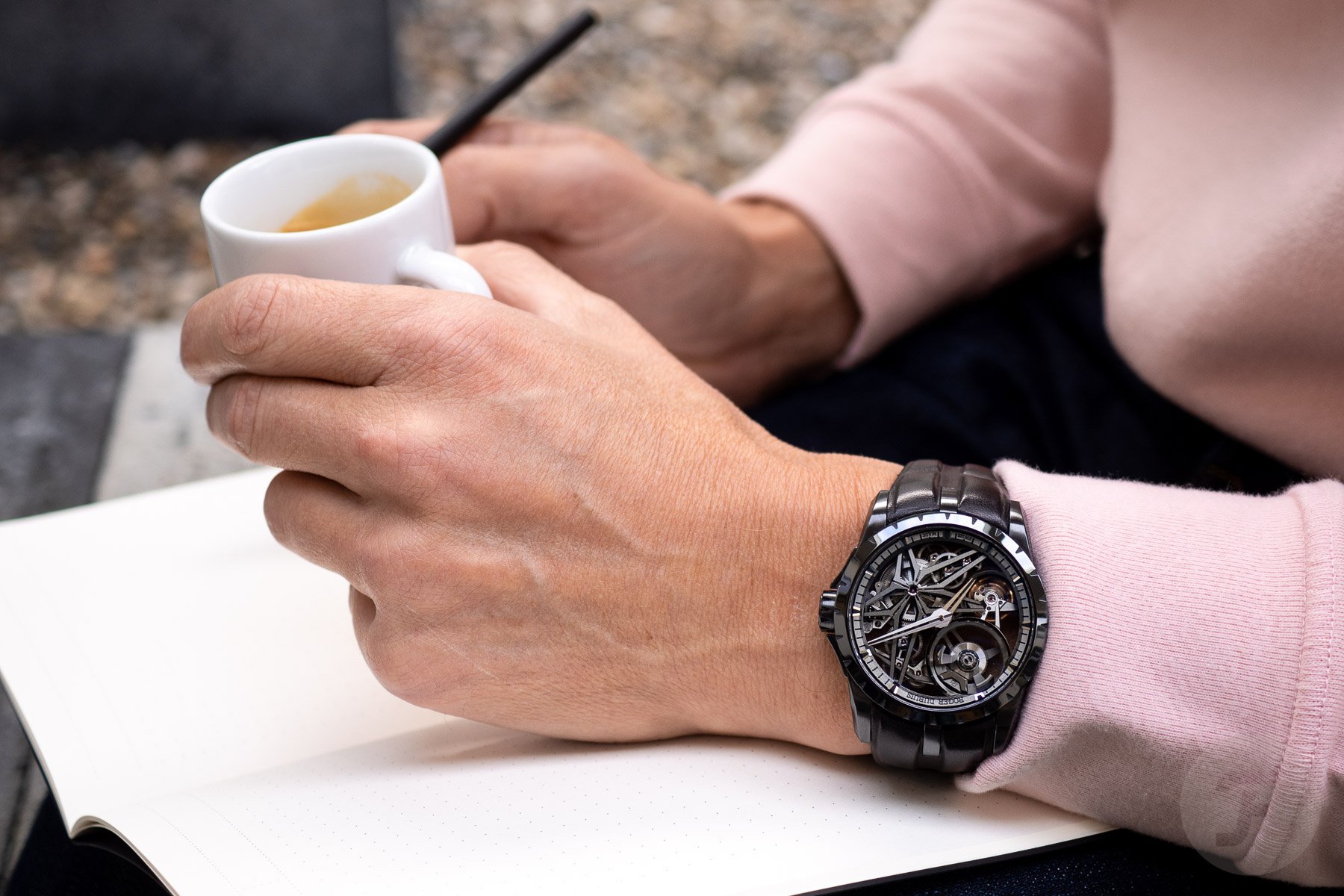 As you might have noticed, I tried to work the price of the watch in as casually as possible. I failed, of course. Yes, €73,500 is a lot of money, but it’s less than the price of a Lamborghini Huracán, and that’s an object you can’t casually show off in a bar. 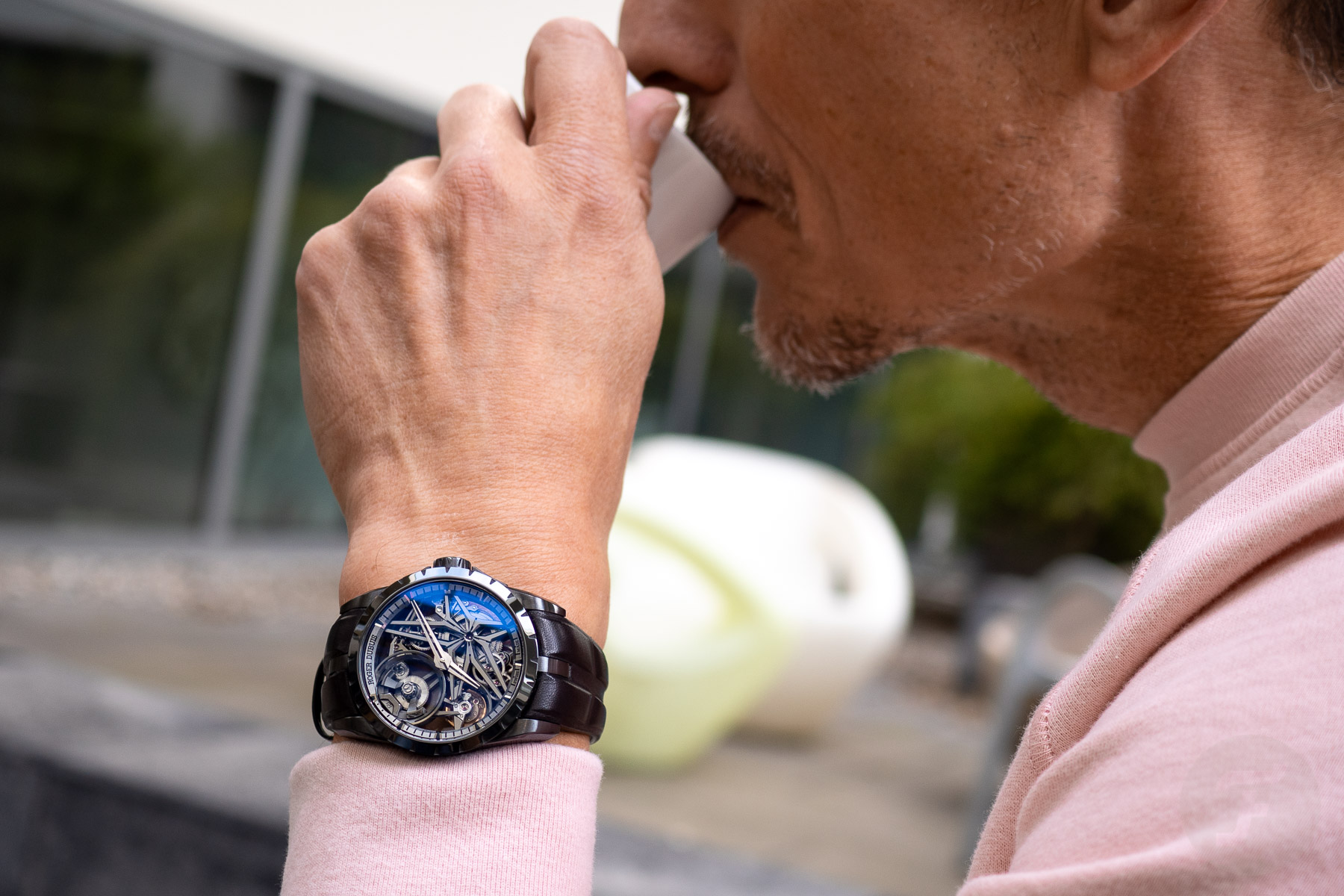 Anyway, I find the Excalibur MB Black Ceramic 42mm an intriguingly good-looking, highly wearable, and original piece of high horology. Something for those who don’t get excited over a Patek 5811, for instance.

If you want to know more about Roger Dubuis and the different Excalibur models, please visit the brand’s website. 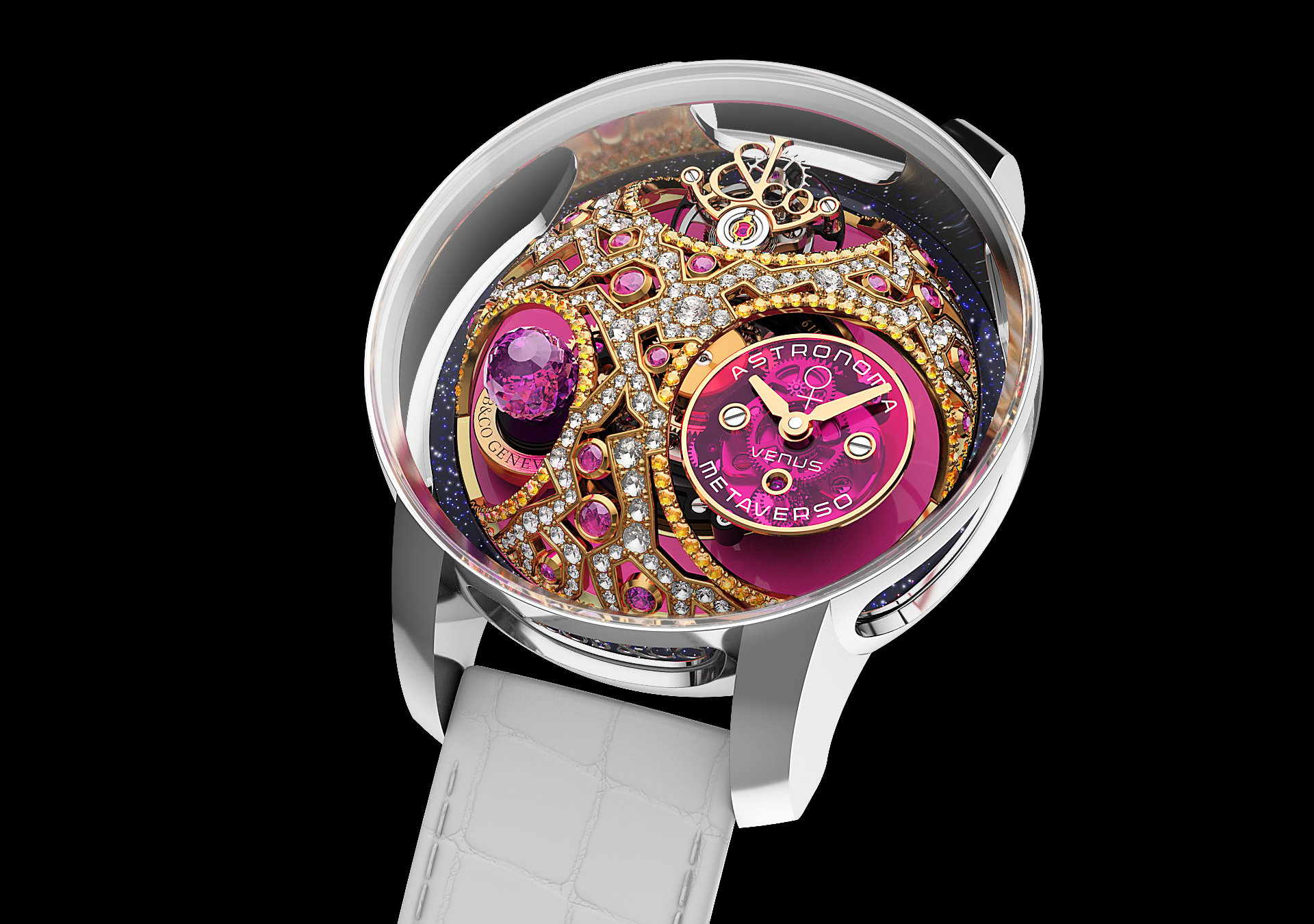 A Jacob & Co for the metaverse and the real world

Something I need to share with you is the announcement of the first-ever “digital native” timepiece competing in the Grand Prix d’Horlogerie de Genève’s Jewelry category. It’s the Jacob & Co. Astronomia Metaverso Venus, which is both an NFT-secured digital timepiece and a physical jewelry watch. Jacob & Co created the digital piece you can wear in the metaverse, for instance, simultaneously with the real-world watch. The digital one is built with 1s and 0s, while the physical one is a unique piece of complicated horological jewelry in white gold.

The physical version of the Astronomia Metaverso Venus is a unique piece that will not be reproduced. The digital version comes in a run of 50 pieces. Now, I’m still trying to wrap my head around NFT watches.  Apparently, though, the members of GPHG Academy already have because they voted for the concept to compete in the final round of the watchmaking competition. Once I’ve made up my mind a bit more, I will write a bit more about binary watches that match the personality of your digital presence.

You can learn more about the Jacob & Co. Astronomia Metaverso concept here. 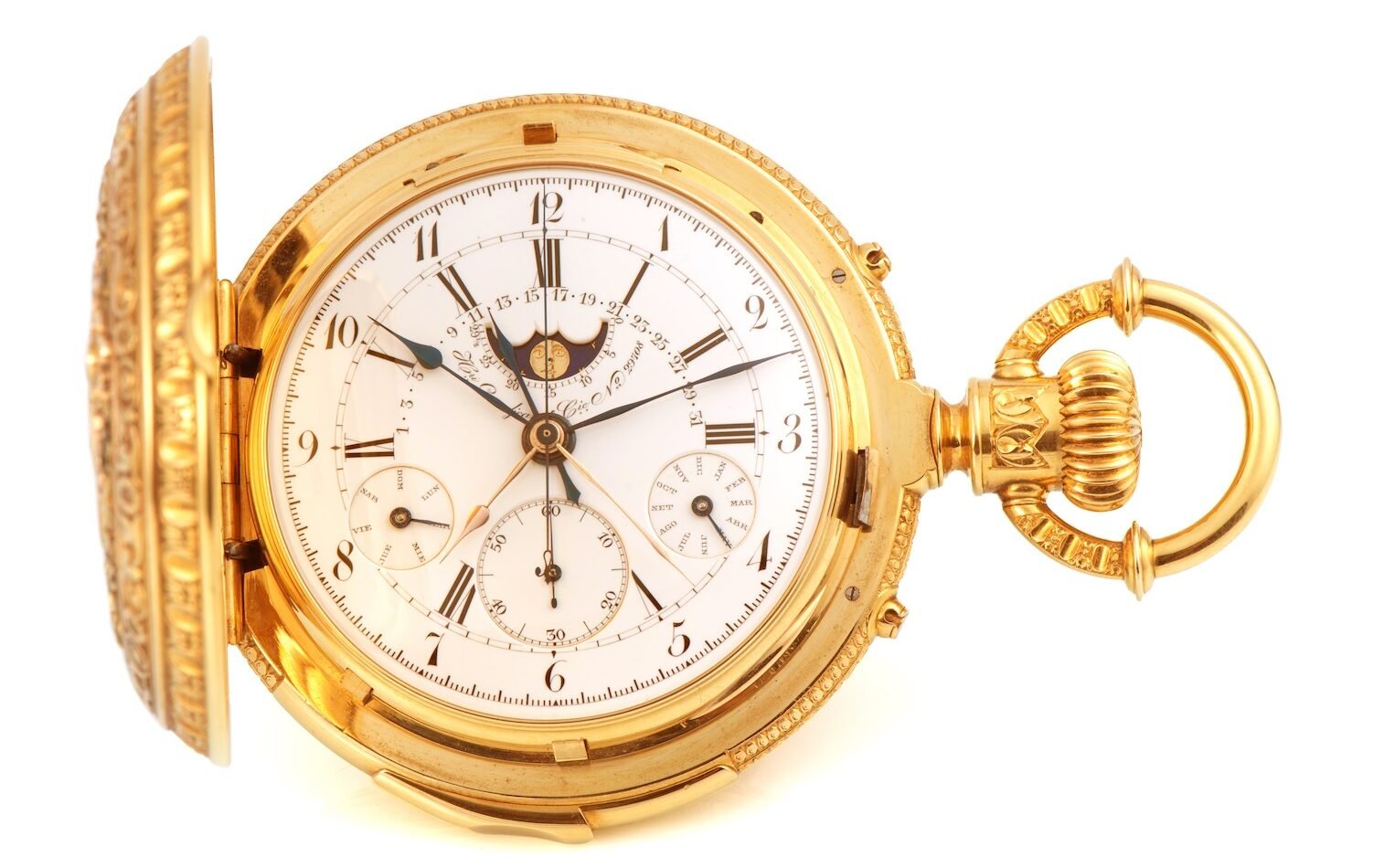 The NFT watch may be a complicated matter, but so is a very complicated pocket watch made by Henri Grandjean (1803–1879) that will be auctioned by Antiquorum come November 6th. The gold pocket watch features eight complications that are rarely combined in a single piece. The 18K multicolored (yellow, pink, green, and white) gold watch in a hunting case has, among other complications, an instantaneous perpetual calendar, GMT, 1/5th-of-second chronograph, a quarter repeater with two hammers and two steel gongs, and moon phases.

In case you’re wondering who Henri Grandjean was, he founded the Neuchâtel Observatory and connected that famous place to the Le Locle School of Watchmaking. He linked them together by cable, setting up the “City of Precision” in Le Locle.

Enjoy a fantastic (watch) week, everyone. I’ll see you either next Monday or somewhere in the metaverse before that if I can find a watch to wear…