From mainstream Rolex to a highly exclusive original Roger Dubuis. Do you know that feeling? After wearing a certain type of watch for some time, you look for something totally at the other end of the spectrum? This week I’m wearing what I consider one of the most beautiful watches in my collection. 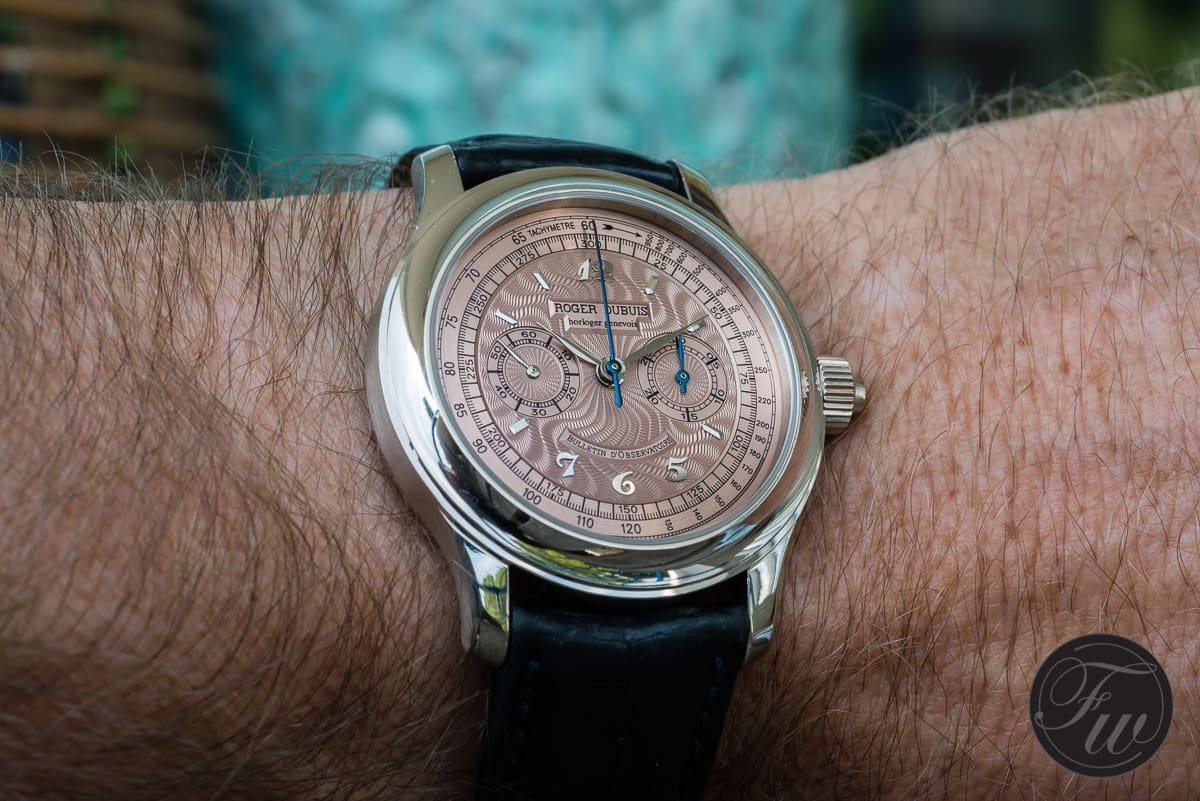 The Roger Dubuis Hommage Monopoussoir H40 on the wrist

A strange model indication isn’t it? Watches mentioned as ‘Hommage’ nowadays are very close to copy-cat watches, mostly of main stream high-in-demand watches. We all know these models from brands like Steinhart, Invicta and the lot.

Made by Roger Dubuis himself

This Roger Dubuis however is very much the opposite. This watch was made by Roger Dubuis himself, before Roger Dubuis became a Richemont owned brand name in 2008. Around the year 2000 Roger Dubuis produced 28 of these watches. Only few of them are known with this solid golden ‘guilloche a main’ salmon coloured dial. Others known had black and white egg-shell-like dials. 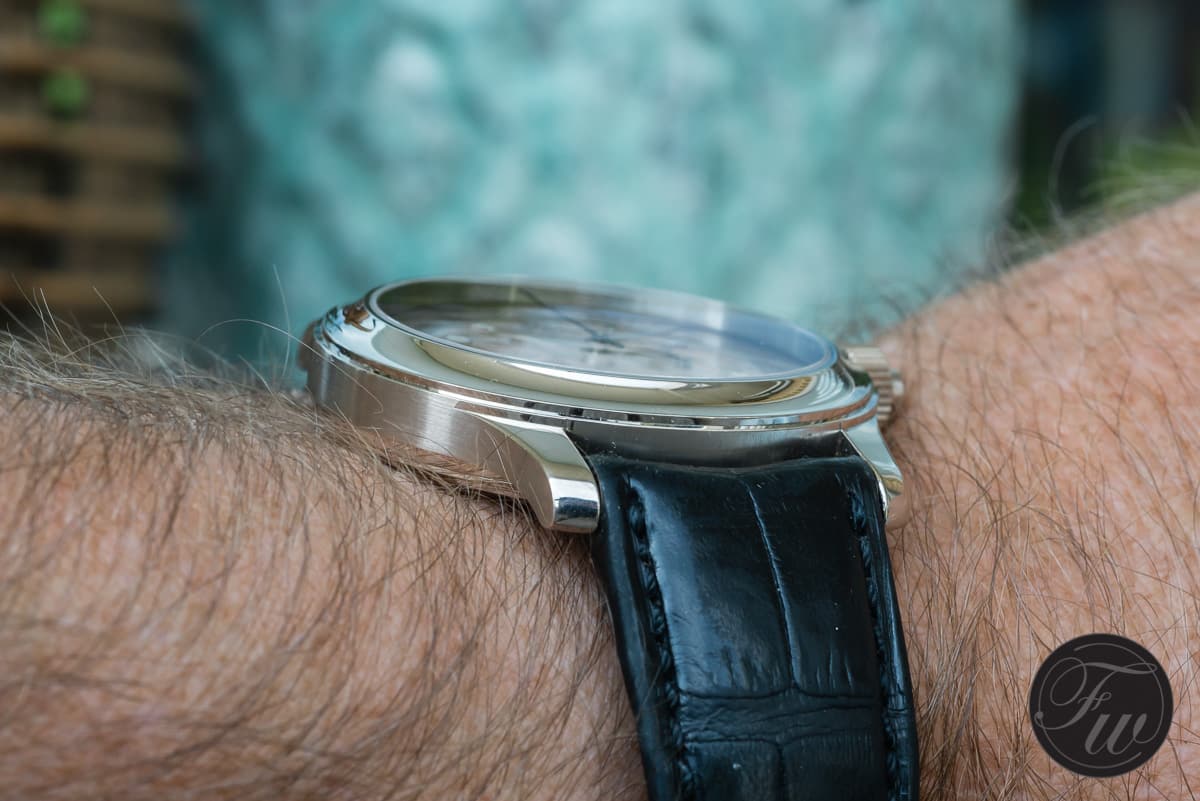 A view at the shape of the Hommage Poussoirs bezel

The origin of the monopoussoir movement

The movement Roger Dubuis used is based on a Lemania 2320, which itself was a high-grade version of the 2310. A column-wheel design with a screwed balance oscillating at 18.000 A/h. Differences between the 2310 and 2320 calibers are a swanneck regulator, 4 extra jewels and a few other refinements. The original Lemania 2310, designed by Albert Piguet and Jaques Reymond was launched already in 1942. It became Omega’s caliber 321, the one we all know so well from the early Speedmasters, and Patek Philippe caliber 2872. 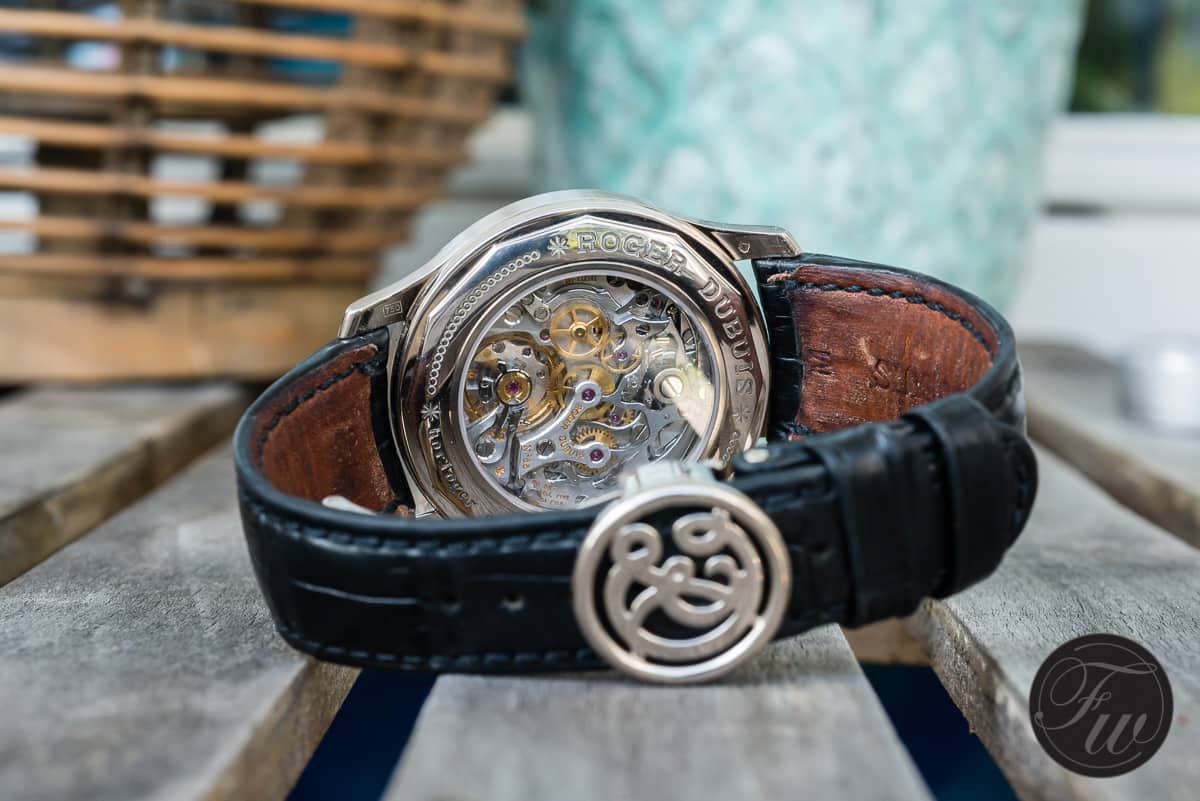 A view at the heavy case back, caliber RD65 and exclusive folding buckle

Originally a 3-register manual winding chronograph with 12-hour register, this movement was revamped and used as 2-register movement by Roger Dubuis as well as by Patek Philippe (and others like Vacheron Contstantin and Breguet). Patek’s designation of the movement became CH 27-70, and it was used for instance in their famous model 5070. 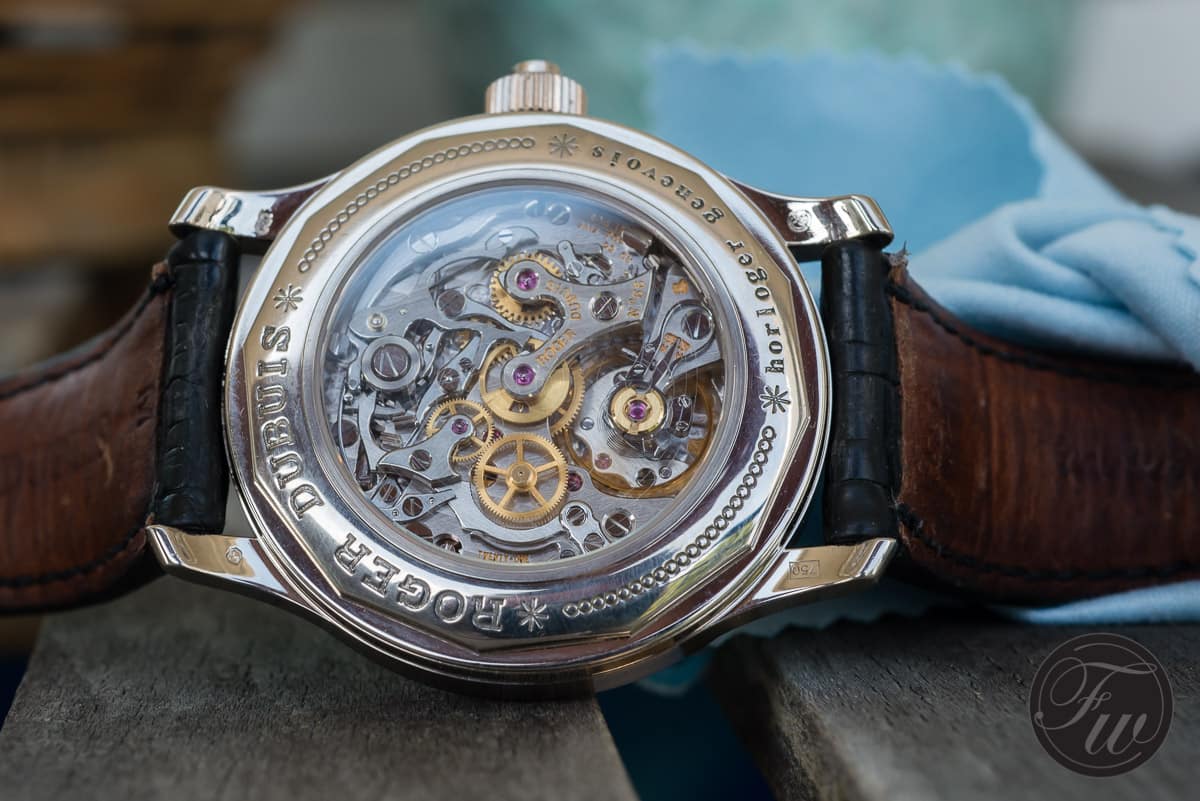 Back to the Roger Dubuis Hommage Monopoussoir H40. I acquired this watch some 10 years ago. It was sold new in the USA by Steven Holzman who was Roger Dubuis agent in the US at that time. During one of my Baselworld visits, a few years later, I ran into Steven and he was honestly extremely delighted to see the watch again. It had been an extraordinary piece for him as well. 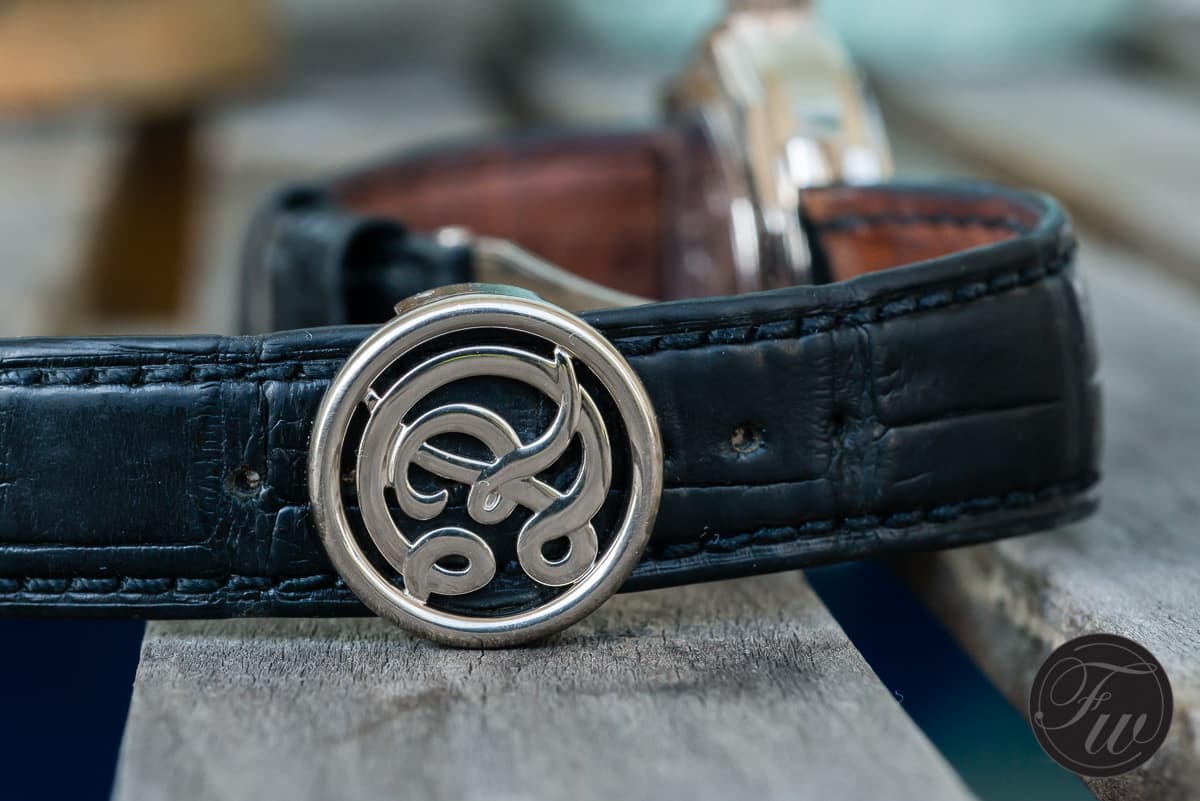 The folding buckle bearing Roger Dubuis’ monogram, as can be seen at his seal ring

During the same year, and probably even more special, I ran into Roger Dubuis himself at Baselworld. And he was strolling the fair with the artist who made the dial! This was such a coincidence. We had a good time over a coffee with many anecdotes about the time Roger Dubuis produced these time pieces, and marketing them cooperating with Carlos Dias. This certainly made the watch even more special to me. 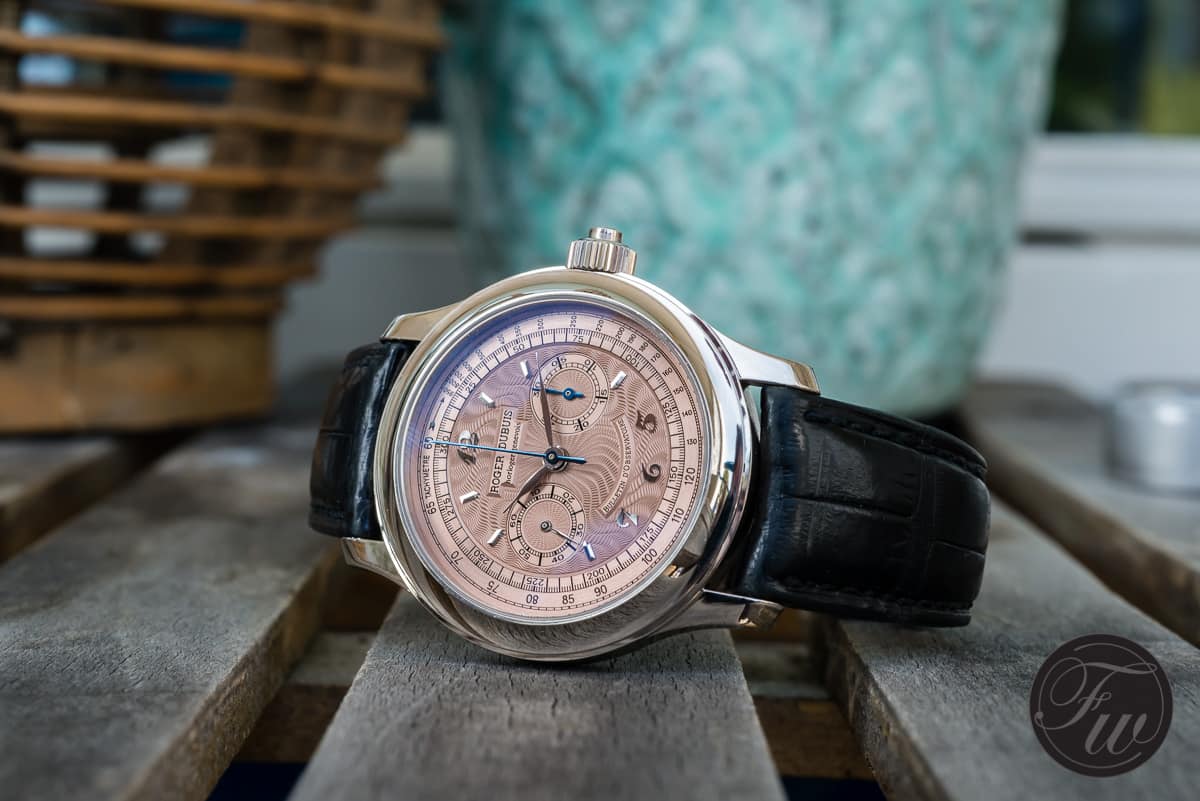 Why this watch is such a beauty

The dial of this watch is nothing short of stunning. The colour, the finesse in finishing, the contrast, the interaction with the hands. Indescribable. I hope the pictures will do it somewhat justice. Then the white gold of the casing gives the watch such a rich feeling. It’s warm in colour and temperature; the hand winding feels so differently from a stainless steel watch. 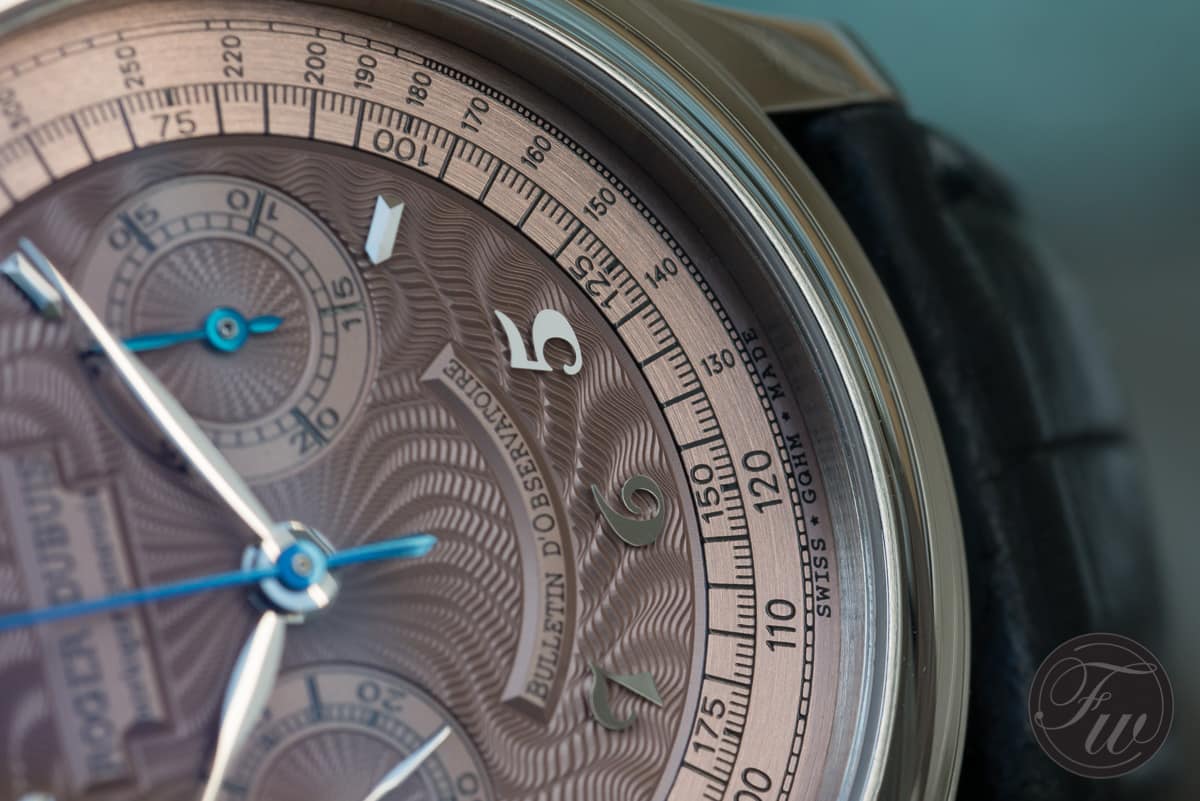 At six in the dial, between the words Swiss and Made, ‘GQHM’ is printed. Not many know the meaning of this however it’s said to indicate ‘Geneva Quality Hall Mark’. The Roger Dubuis Hommage Monopoussoir H40 watch bears no less than the ‘Bulletin d’Observatoire’ for accuracy and the ‘Poinçon de Genève’ quality certificate. All paperwork belonging to these certifications are supplied with the watch, together with warranty and number certification signed by Roger Dubuis himself. 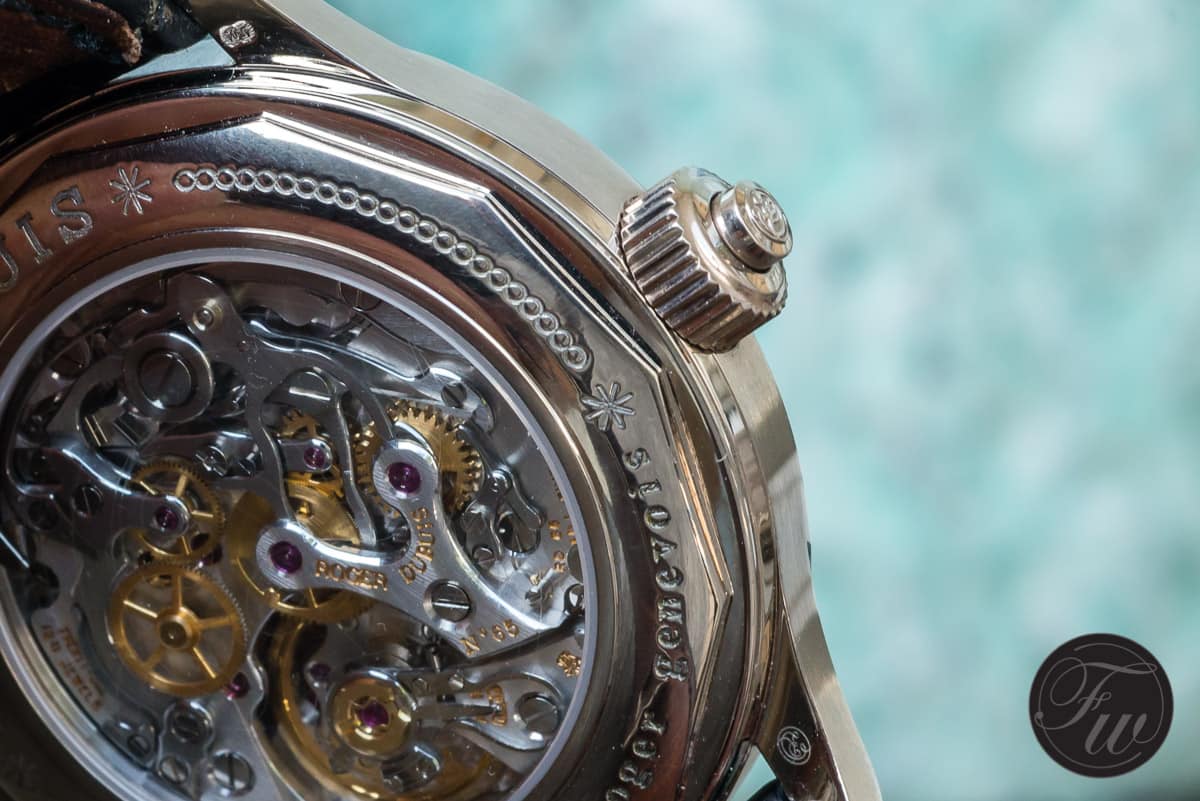 The signed chronograph poussoir in the centre of the crown

Last but not least, a white gold case back is added separately. I can’t imagine anyone ever has used this accessory; who doesn’t like the look of the perfectly finished RD65 caliber? The watch is supplied in an unequalled box with wood inlay, and a leather passport-like portfolio contains all the paperwork. When the watch was sold new its retail price was around US$ 37.000,=.

The Roger Dubuis Homage Monopoussoir H40 on the wrist

A view at the shape of the Homage Poussoirs bezel

Hot Topics
Introducing: The Omega Speedmaster Super Racing With Spirate System
162 comments
Design Vs. Specs — Which Is More Important To You When Buying A Watch?
86 comments
The Time To Buy Is Now: How The Current Economic Climate Influences Watch Buying And How You Should React
51 comments
My Predictions For New Omega Speedmasters In 2023
48 comments
A Regret-Free Guide To Buying Your First Luxury Watch — Part Three: Higher-End Options From Omega, Rolex, Grand Seiko, And More
48 comments
Popular
(From The Archives) Shut Up & Read The Truth About Cartier Watches
George Cramer
21
Hands-On With The Seiko Prospex Dawn Grey Series
Robert-Jan Broer
12
You Asked Us: Rolex Submariner vs Omega Seamaster
Robert-Jan Broer
25