Would You Spend €15K On A Gold Rolex Day-Date With A Quartz Movement?

For your consideration, the Rolex Oysterquartz
Robert-Jan Broer
comments 42
Share

When I looked at a Rolex Oysterquartz for the first time, it left me a bit puzzled. The shape was right up my alley, but I couldn’t grasp why Rolex decided to use a quartz movement inside such an expensive watch. Though there wasn’t much on the internet in those days, after some research, I found some images of the movement used in the Oysterquartz Day-Date, Rolex caliber 5055. The quartz 5035 (Datejust) and 5055 (Day-Date) movements look beautiful, and perhaps even nicer than some of the third-party mechanical movements out there. Rolex applied the Geneva waves and gold-filled engraving on the bridges of the movement. The movement also produces this loud and characteristic ticking sound. This is due to the pallet fork that sets the pallet wheel into motion. What you hear is the pallets engaging with the wheel. 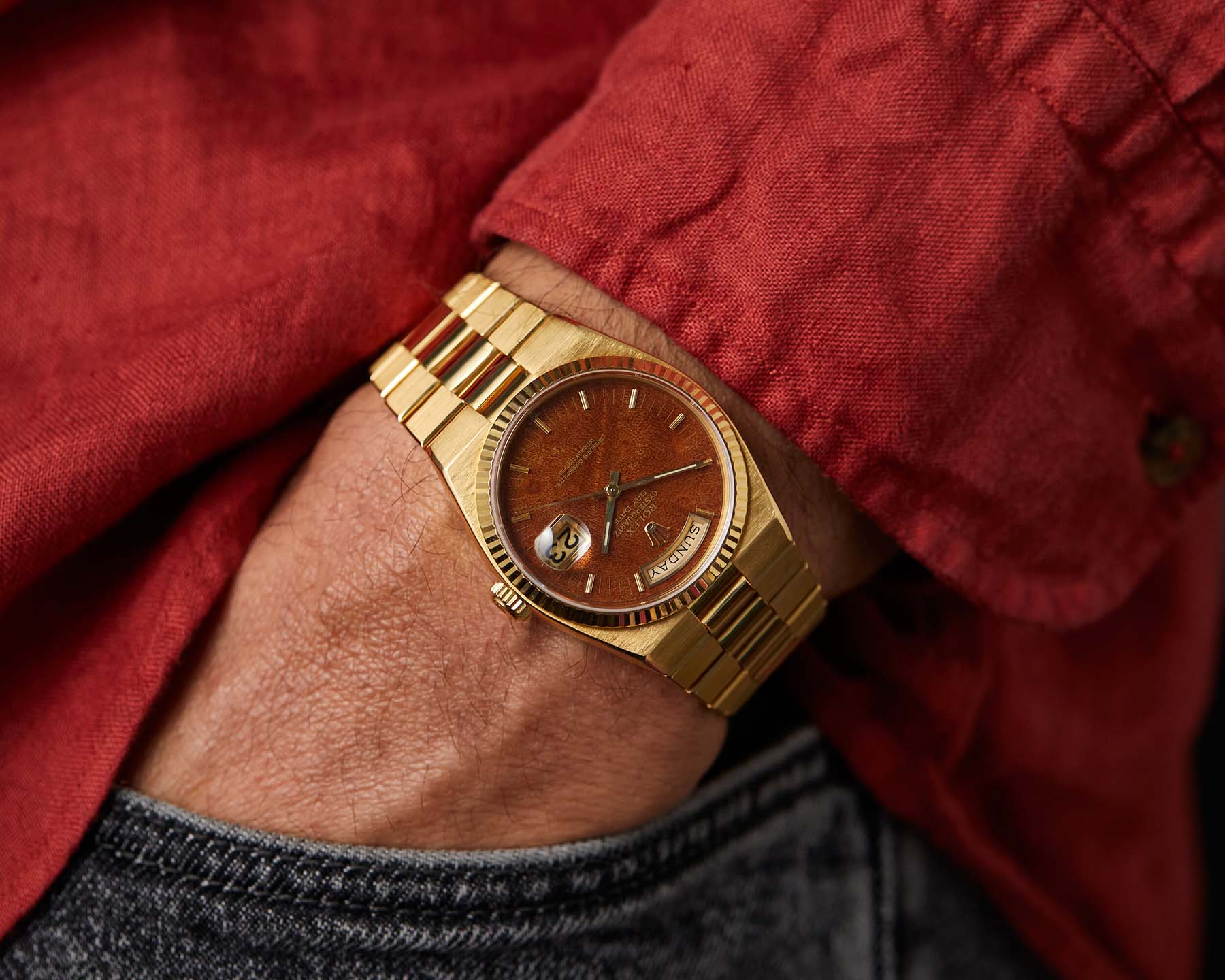 The 36mm diameter case has an integrated bracelet, much like a Royal Oak or an Ingenieur. One could even suspect Genta had a hand in this watch, though, as Brandon indicated in his recent Oysterquartz article, he did not. I used to own an Oysterquartz 17013 at some point in the early 2000s (one from 1977, with a so-called “single-line dial”). It is an amazing 36mm watch that I ended up letting go to a family member who showed a great interest in it. 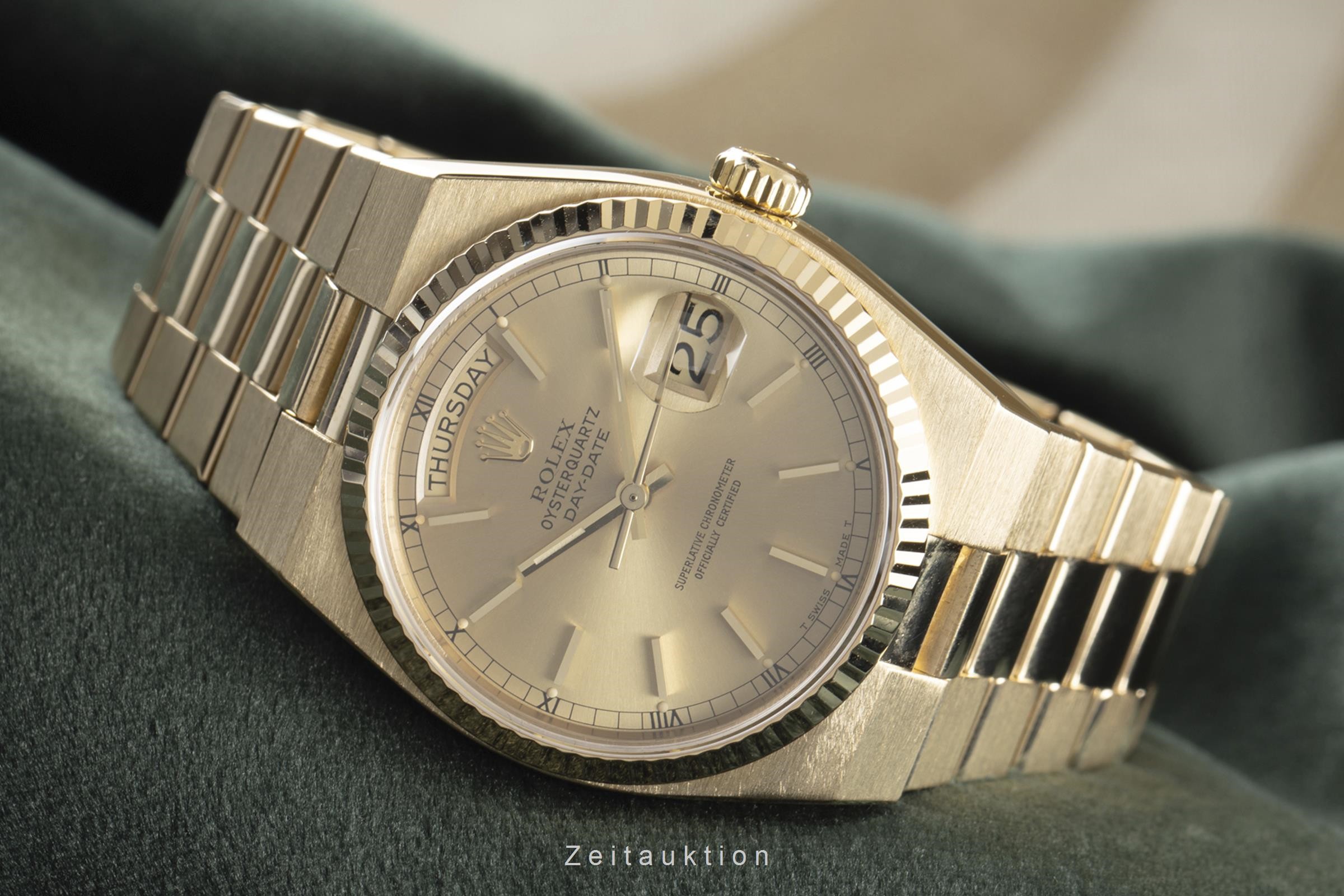 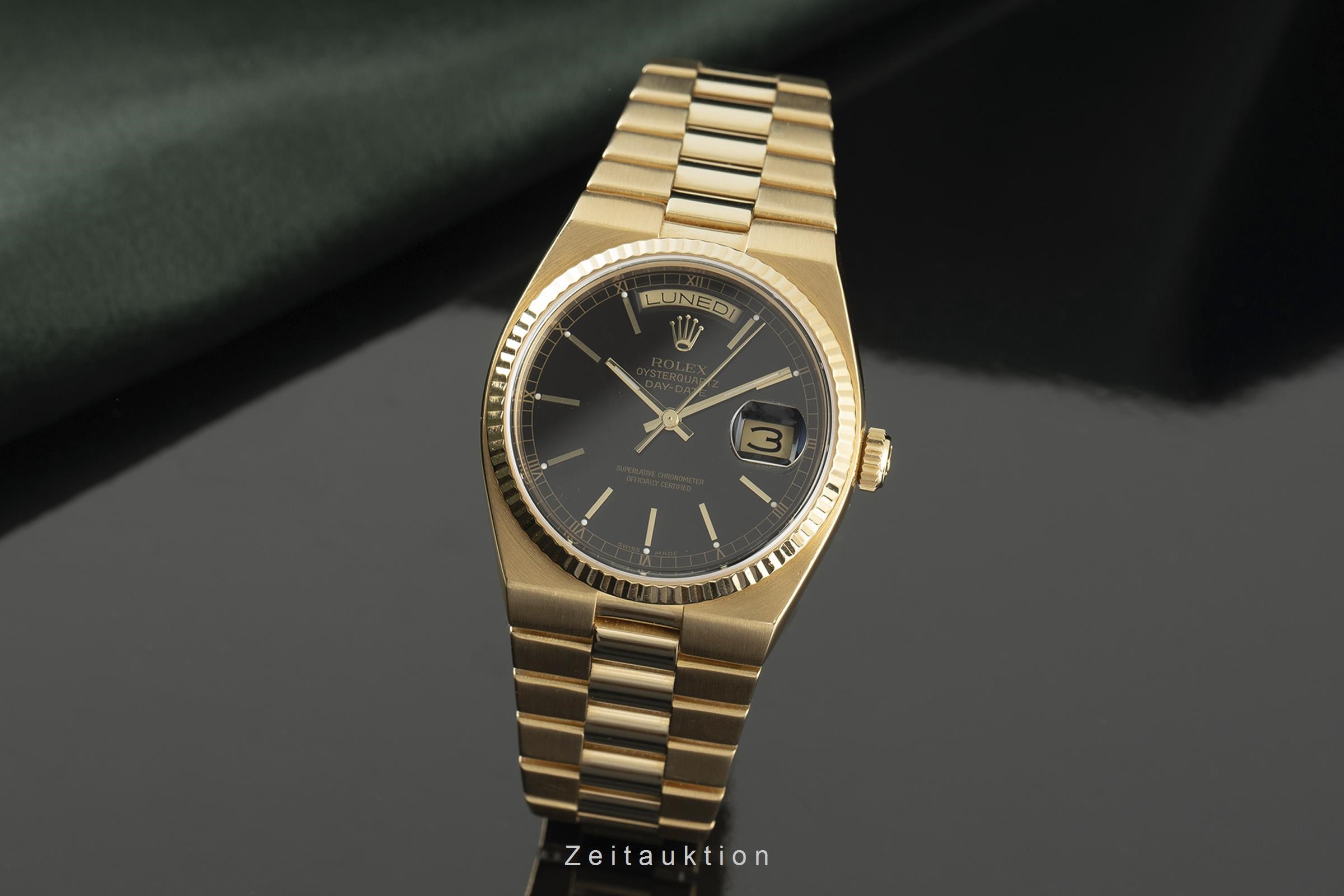 However, if you love the characteristics of this special Rolex quartz movement and the integrated design of the Oysterquartz models, these watches are worth investigating. There are many dial variations out there, from champagne, black, and white to those with a burl-wood pattern and vignettes. The exclusivity of the dial does play an important part in the price it seems, but I think I’d prefer one with a champagne dial. In general, the white gold Oysterquartz models are more expensive and more difficult to find. But, in the end, I think it is the case and bracelet design that is the main attraction for owning a watch like the Oysterquartz Day-Date (or Datejust), as well as the specific quartz movement developed by Rolex.

A quartz watch can have a soul

I started this article by saying that I was told that quartz watches have no soul, but I’ve learned that this is not true. To me, at least, it doesn’t apply. As long as I have a personal connection to it, in my opinion, any watch can have a soul. There’s more to a watch than the movement anyway, but in this case, the Rolex quartz movement is quite something. It is not the replaceable cheap plastic quartz movement used in low-cost watches. The only thing that does worry me a bit is the serviceability of the Oysterquartz movement. You don’t want to hear from your Rolex Service Center that they can’t service your expensive full gold Day-Date anymore. On the other hand, these watches have been around for nearly 45 years, and watchmakers still accept them for repair and servicing. In the first years of production, the Oysterquartz watches were only water-resistant to 50 meters. Later on, this was changed to 100 meters of water resistance. 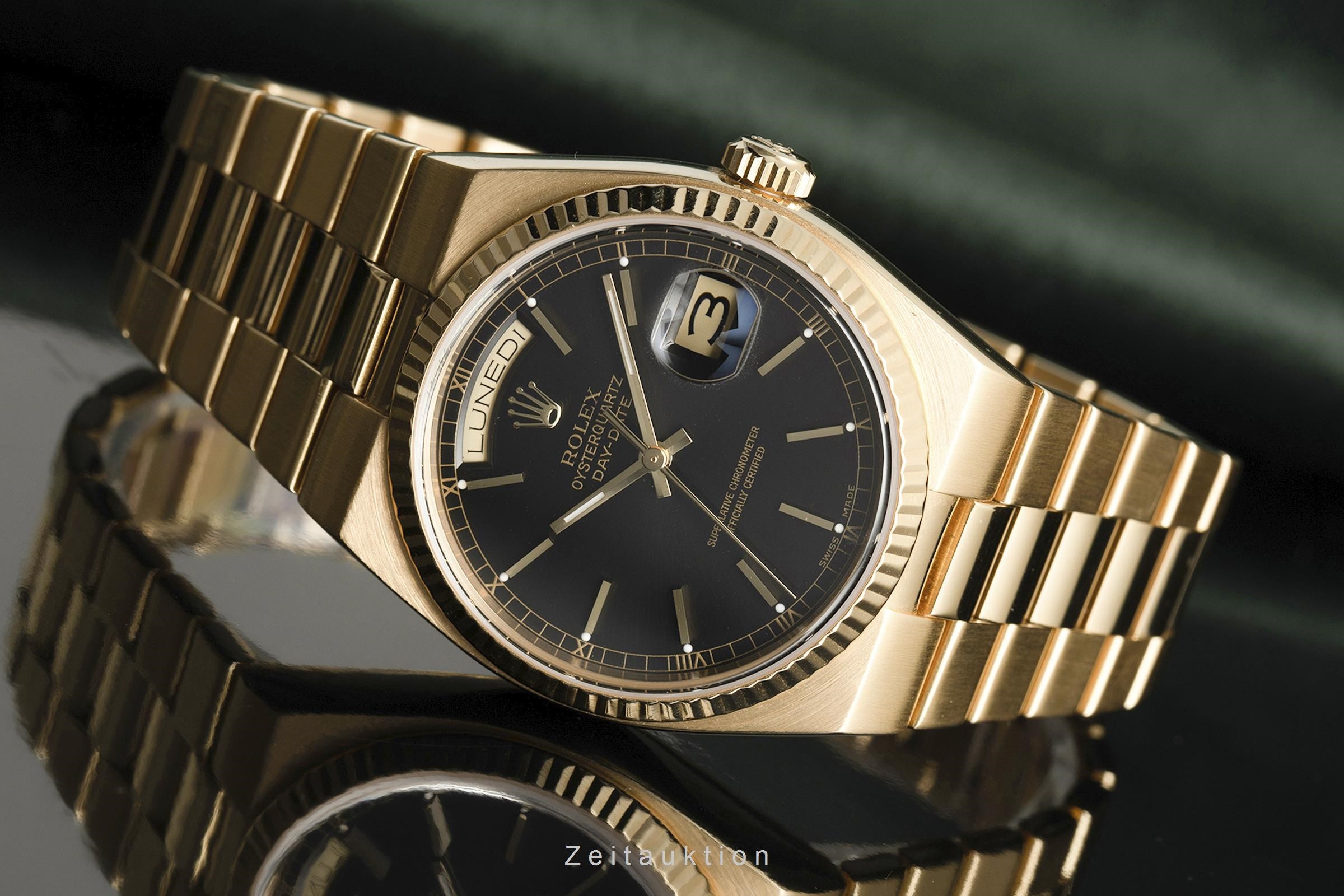 Would you feel comfortable spending around €15,000 on a quartz watch though? Quartz technology is perhaps less romantic than a mechanical movement, but this caliber 5055 (and 5035) by Rolex is definitely something else. Besides the movement, the value, of course, is also in the precious metal and, if we’re being honest, the Rolex brand name. As long as Rolex can service the movement, personally, I don’t see much of an issue. And last but not least, you also buy into some history here. On March 2nd, 2022, Sir Michael Caine’s 18K gold Rolex Oysterquartz Day-Date 19018 from 1980 will be auctioned by Bonhams. Other noteworthy Oysterquartz wearers are the recently deceased Bob Saget, mountain climber Reinhold Messner (he wore it when climbing Mt Everest in 1978), and Sir Edmund Hillary, who wore one later in life. 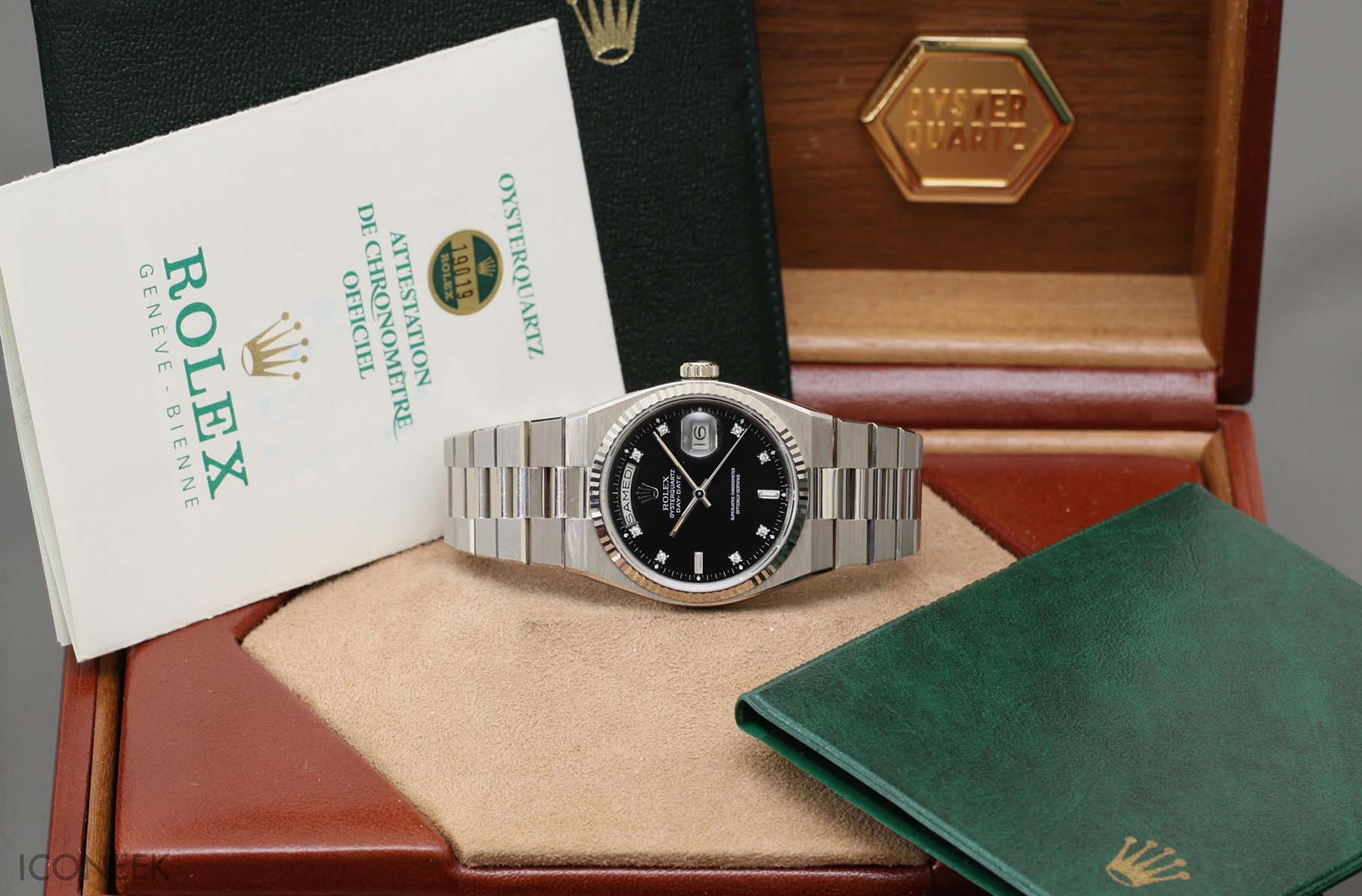 I only covered the Oysterquartz Day-Date 19018 and 19019 here, but there are seven other references for the Day-Date with quartz movement. Most of the variations are in the use of baguettes, diamonds, and other stones on the dial, bezel, or bracelet. To me, an interesting variation is reference 19028, the “Pyramid”, whose bezel and center links have this Clous de Paris decoration. 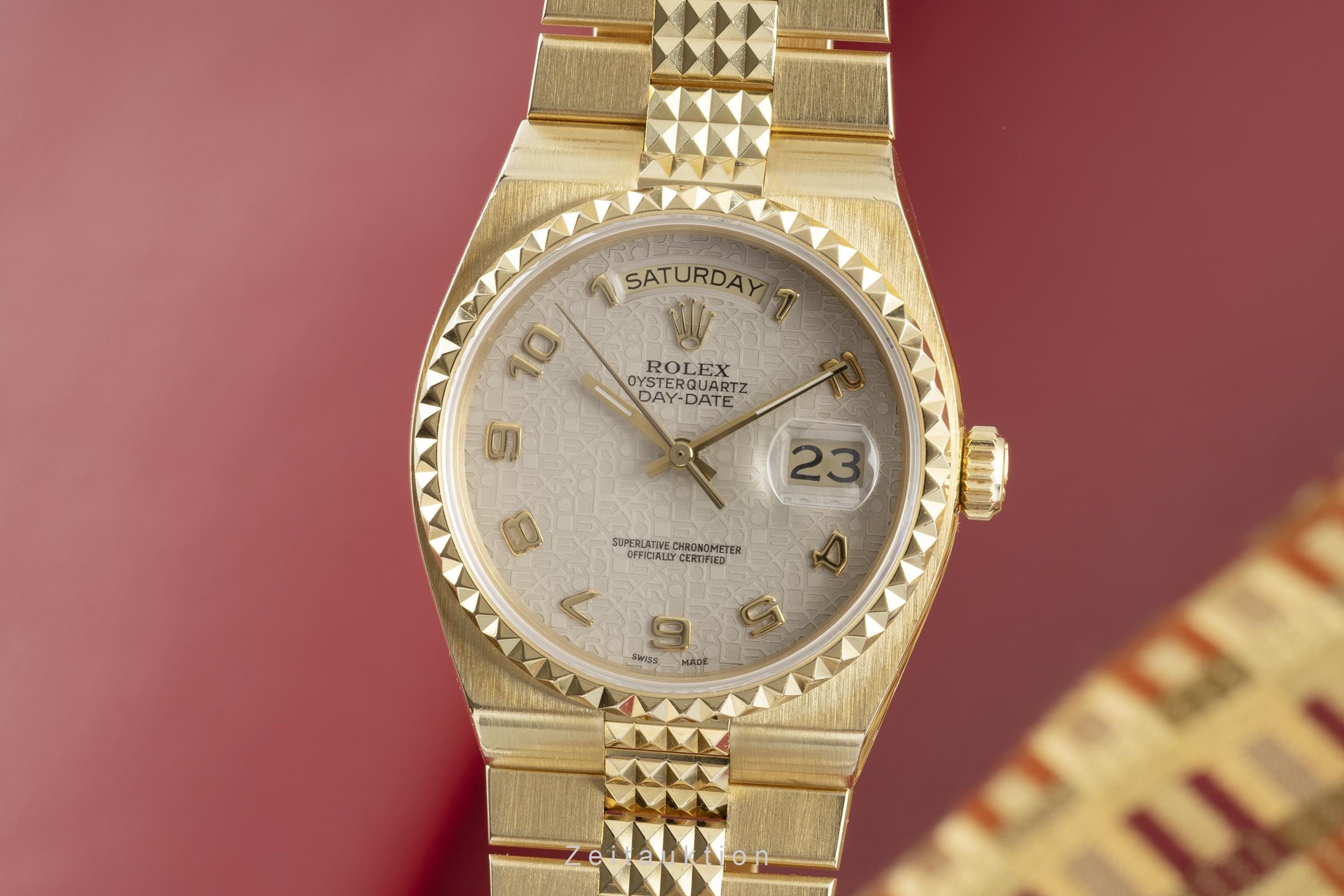 What do you think? Can quartz watches have a soul, and is a solid gold quartz Rolex worth €15K? Let us know in the comments below.